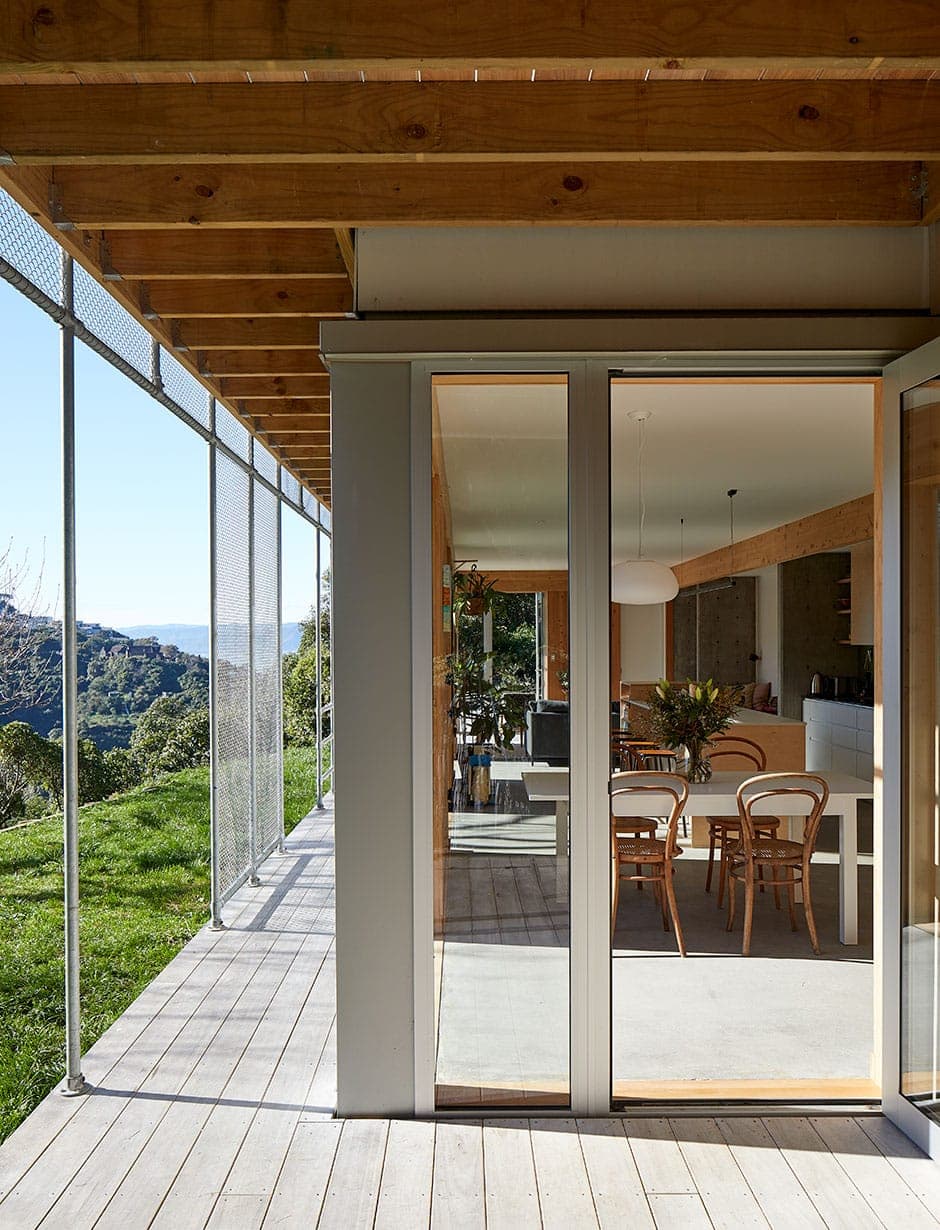 At the core of this exemplary Wellington dwelling are green concepts and family values.

Vertiginous hills and mad access issues don’t usually faze Wellingtonians — but this site was a tad different. When Amélie Goldberg and Karl Wakelin came to investigate building on this 700m2 section in Wadestown, it had been on the market for 25 years. “At one stage, kids from the neighbourhood made a skateboard ramp here,” says Karl. But it was close to where Amélie’s parents live, north-facing and within their budget, so when Karl’s builder father, Max, gave the land the expert nod, it was all on. 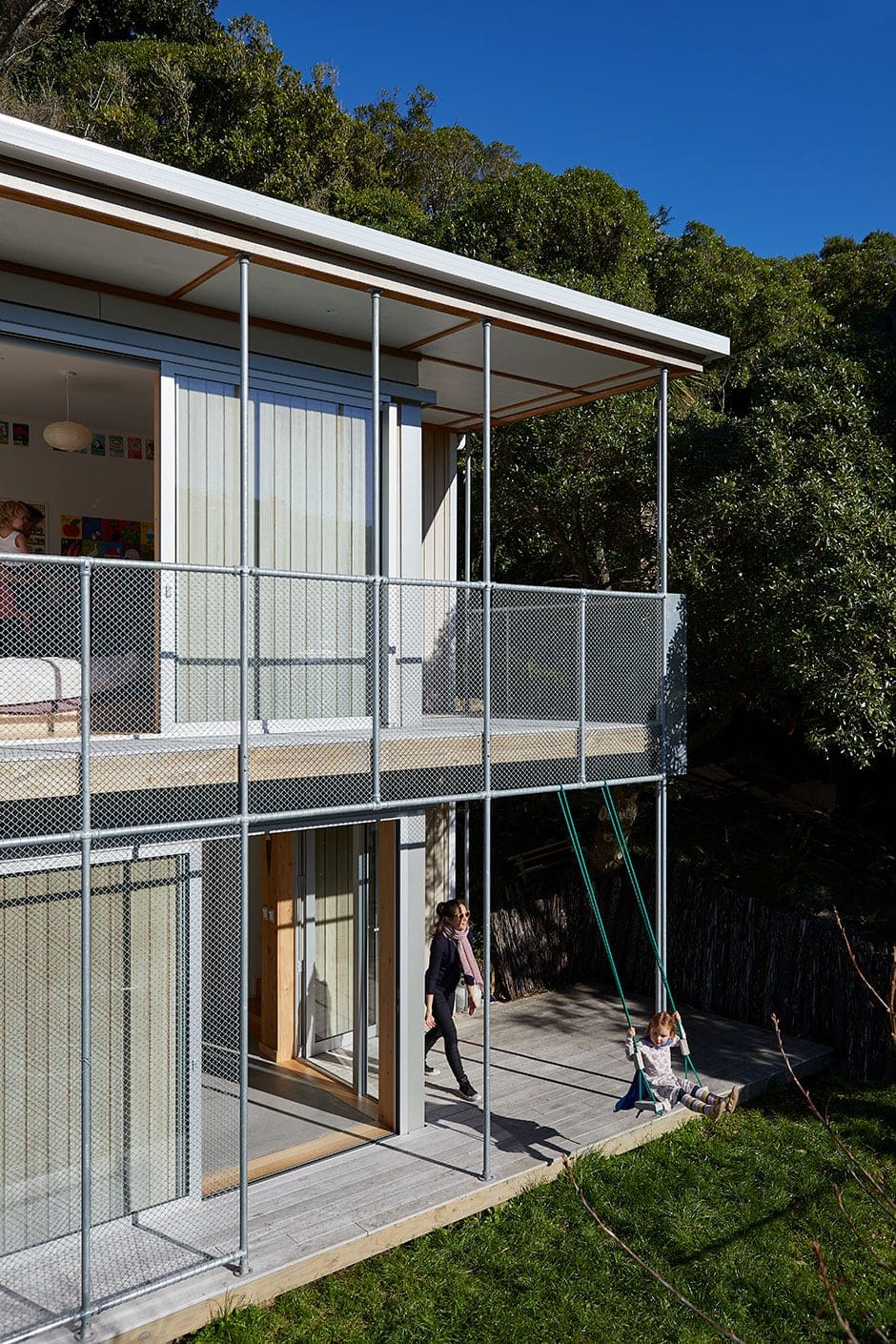 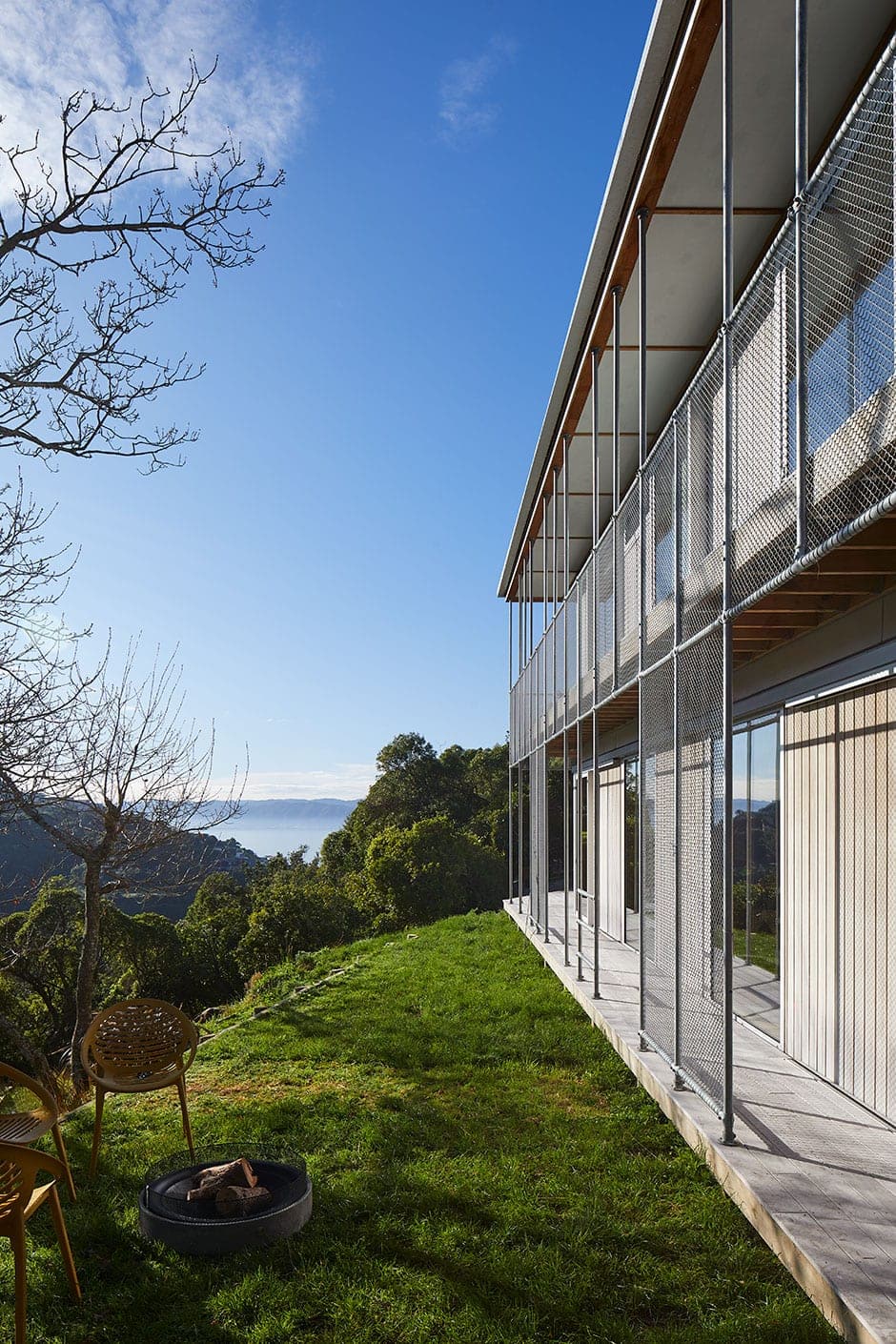 TOP The house makes the most of the sun. “It can be a freezing 100C day outside, but 220C inside,” says Karl. Here, Amélie and Claudie are pictured on the deck, where the railings are made of mesh and galvanised poles, to which the engineers advised adding an extra coat of galvanising as protection from the coastal salt spray. ABOVE This view east from the front lawn extends from Ngaio Gorge towards Matiu/Somes Island.

Amélie, who’s a policy advisor on energy efficiency and climate change, and Karl, a building performance manager, saw this as an opportunity to explore green concepts in their own backyard. Karl had constructed a number of houses before, Max was a willing helper and, as the project went along, Amélie developed the hands-on skills to get stuck in too.
The first step was to clear the property of scrubby wattle. Karl spent many weekends cutting down brush, and four months and 100 wooden steps later, the build was finally able to begin. 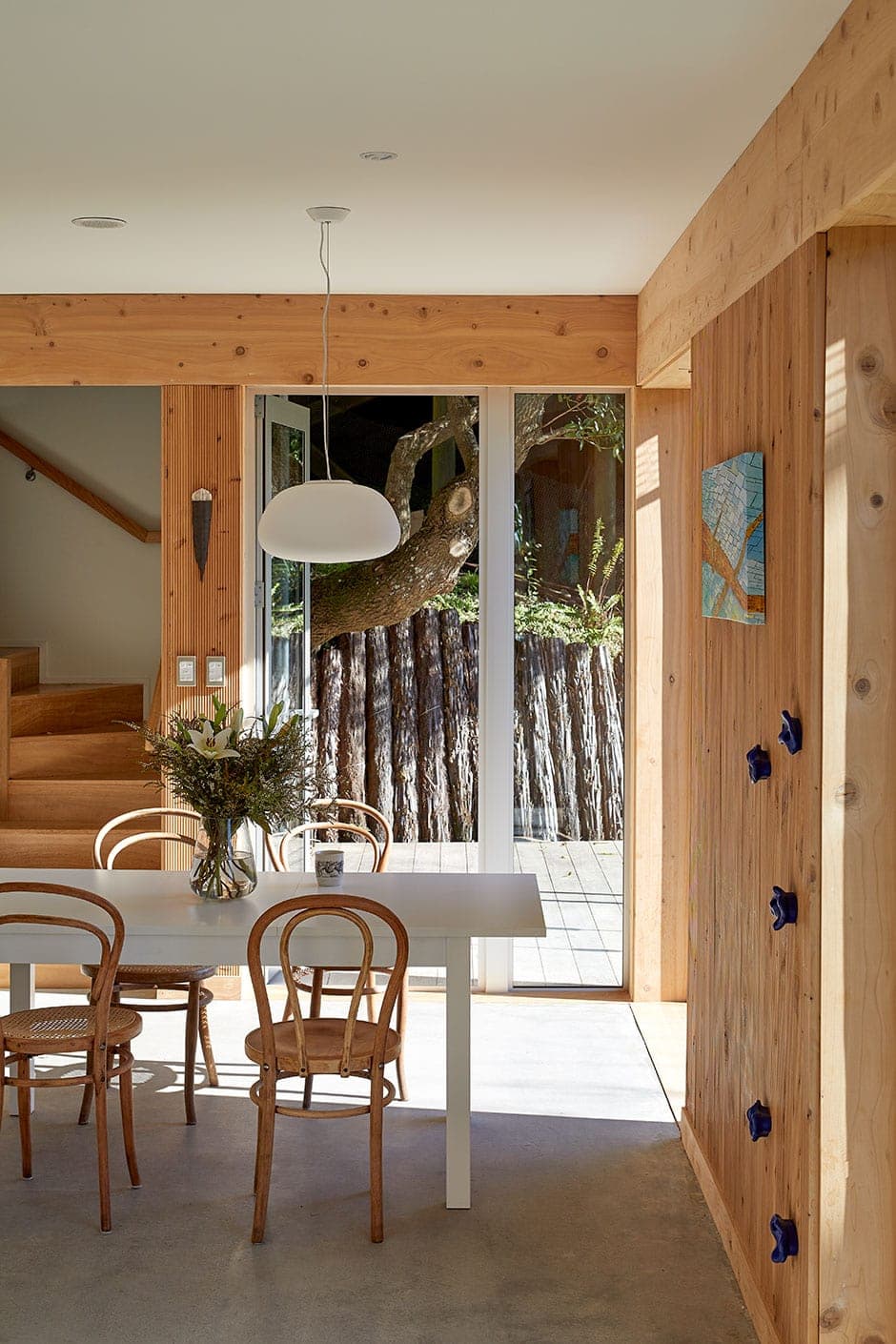 ABOVE An Egg 420 pendant light from Ubercool hangs above an Ikea dining table and a quartet of bentwood chairs; two are original Viennese chairs — gifts from Amélie’s parents — while the others were found on the street and sanded down and re-caned by Amélie. The artwork on the right (where Karl has added holds to create a rock-climbing wall for Claudie) is by Amélie’s California-based brother-in-law, Adan Contreras.

Ben Mitchell-Anyon of Patchwork Architecture is a friend of Karl’s from university, and the two set about teaming the former’s design nous with the latter’s determination to make this a high-performing home. “I was focused on how it works for the humans inside it — its energy needs, comfort, durability and the way it dealt with ventilation and moisture,” says Karl. 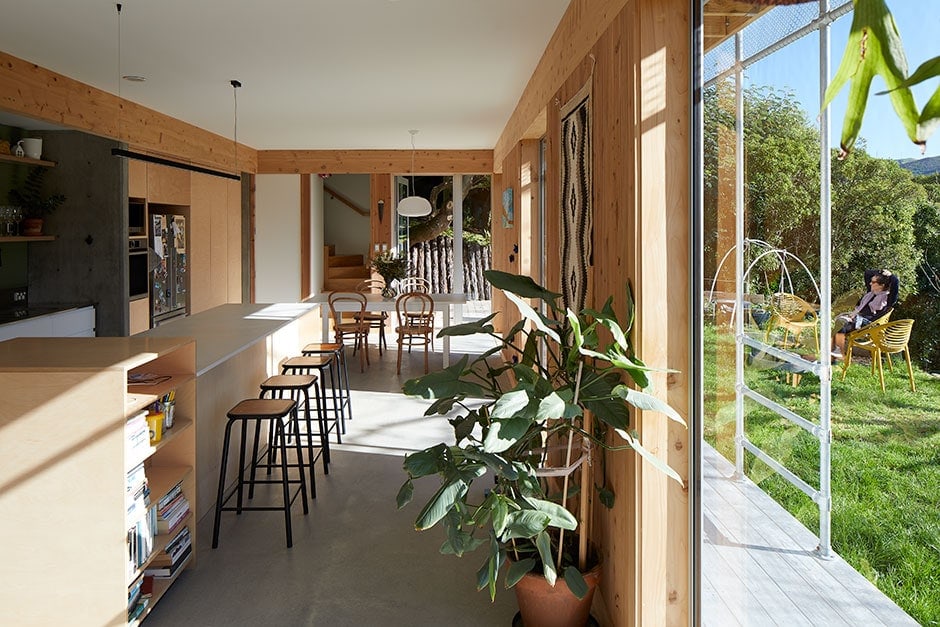 ABOVE Amélie’s Ikea-meets-DIY kitchen design proved an economical way to do it — all up it cost $18,000. Managing the project, she had the plywood shelves, cabinet fronts, rangehood and island unit cut to size, then Karl and a friend helped her biscuit-join and assemble them to fit around the Ikea carcasses and drawers. The Ledlux Strix pendant light is from Lighting Direct and the Ecole Bistro bar stools are from Zuca. On the wall, a traditional rug by Navajo weavers brings texture to the space.

Ben had his work cut out for him. He had to conceptualise a home that looked the part, was simple to build and was on track to achieve an 8 Homestar rating (a measure of efficiency and healthiness set by the New Zealand Green Building Council) — all for a budget of $450,000. It’s testament to a strong friendship that, three iterations later, the couple and their architect achieved a model they were all happy with. 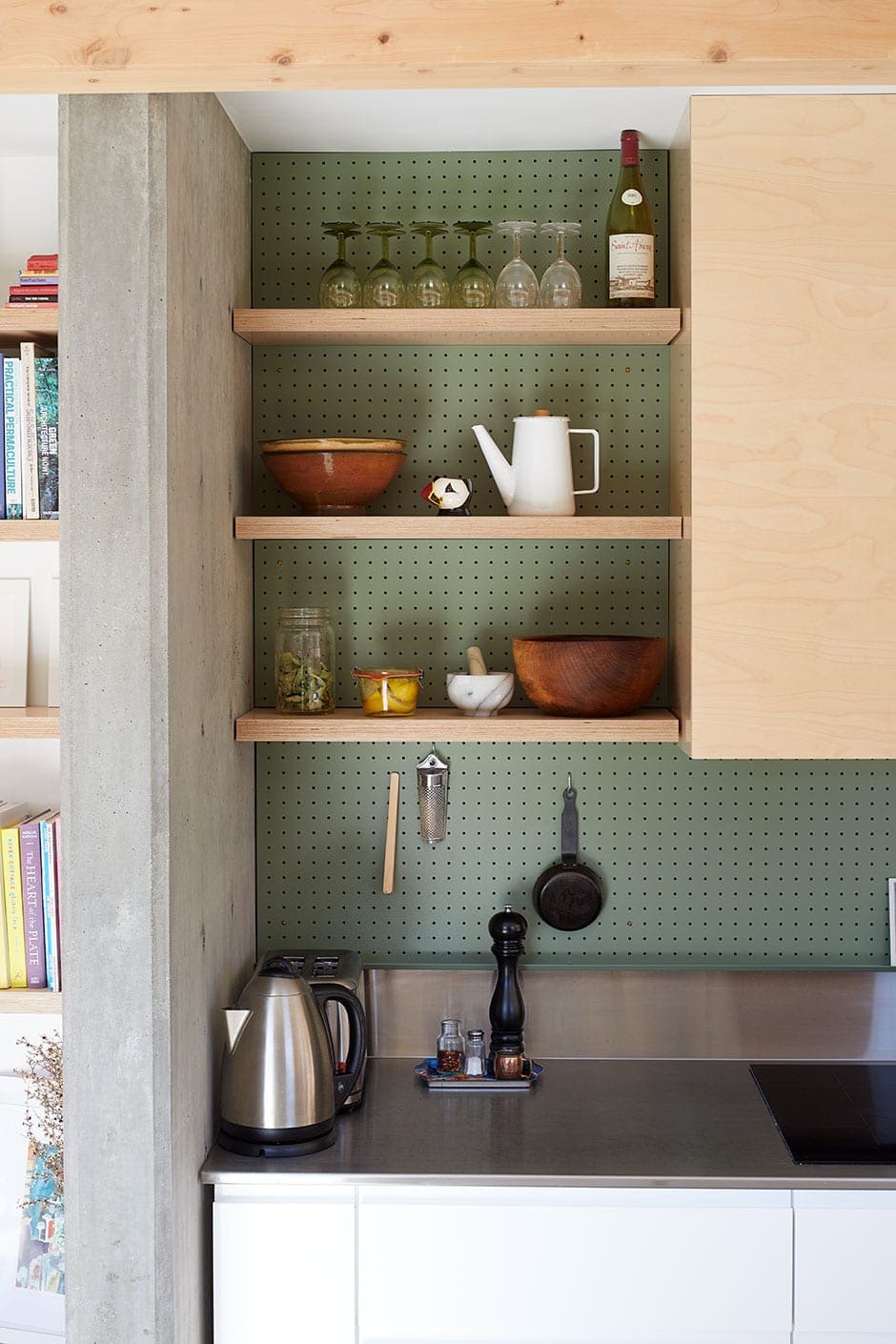 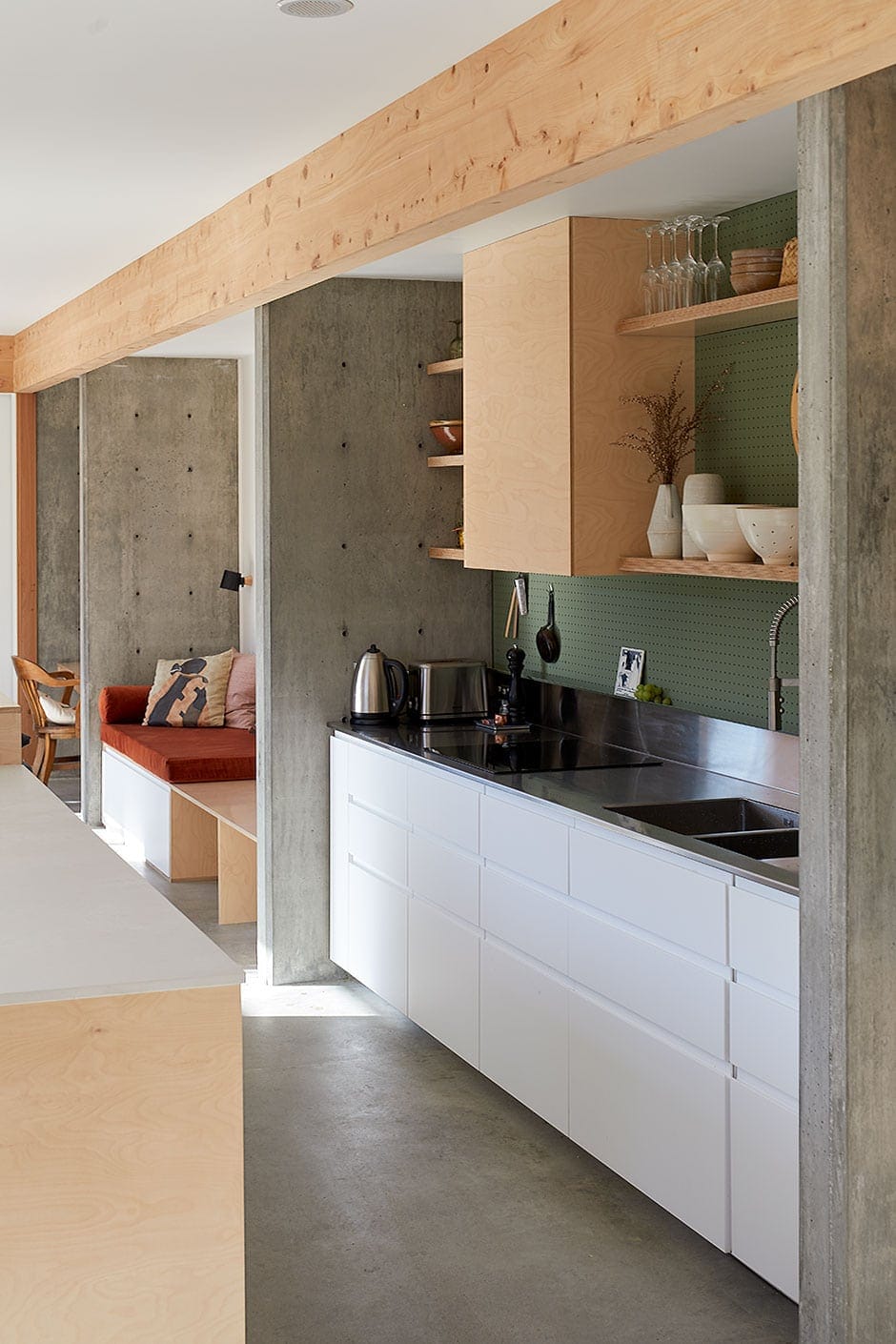 TOP The kitchen’s pegboard is made of magnetic steel powdercoated in Dulux Duralloy LSG Mist Green. Keepsakes on the shelves include crystal sherry glasses inherited from Amélie’s Dutch grandmother, Egyptian ceramics, a Japanese Kaico coffee pot by Shoei Kogyo and a bowl handcrafted from New Zealand walnut. ABOVE The main bench (with benchtop from Brightworks Stainless) is housed between two concrete walls that were formed up with plywood boxing and poured in situ. The cupboards are made from FSC-certified Spectrum Eco Clear from Plytech, and the shelves made by the couple feature a collection of white ceramics by Salad Days.

The process, which featured on TV3’s Grand Designs, took 19 months in total. It’s easy to encapsulate that in a sentence — harder to live and breathe it. From dropping the digger in by helicopter to start it off, to the last day of the shoot, Karl was front and centre. 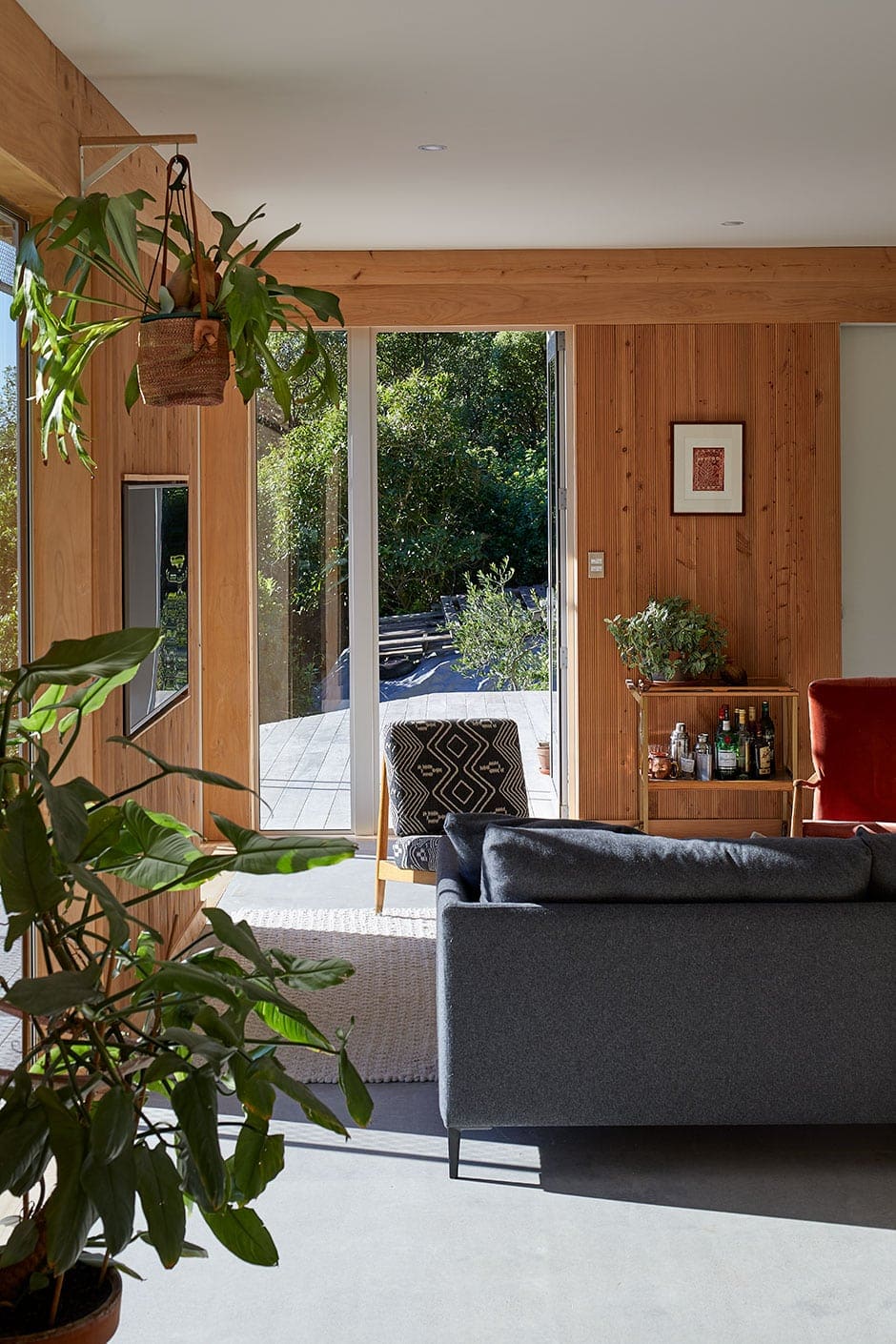 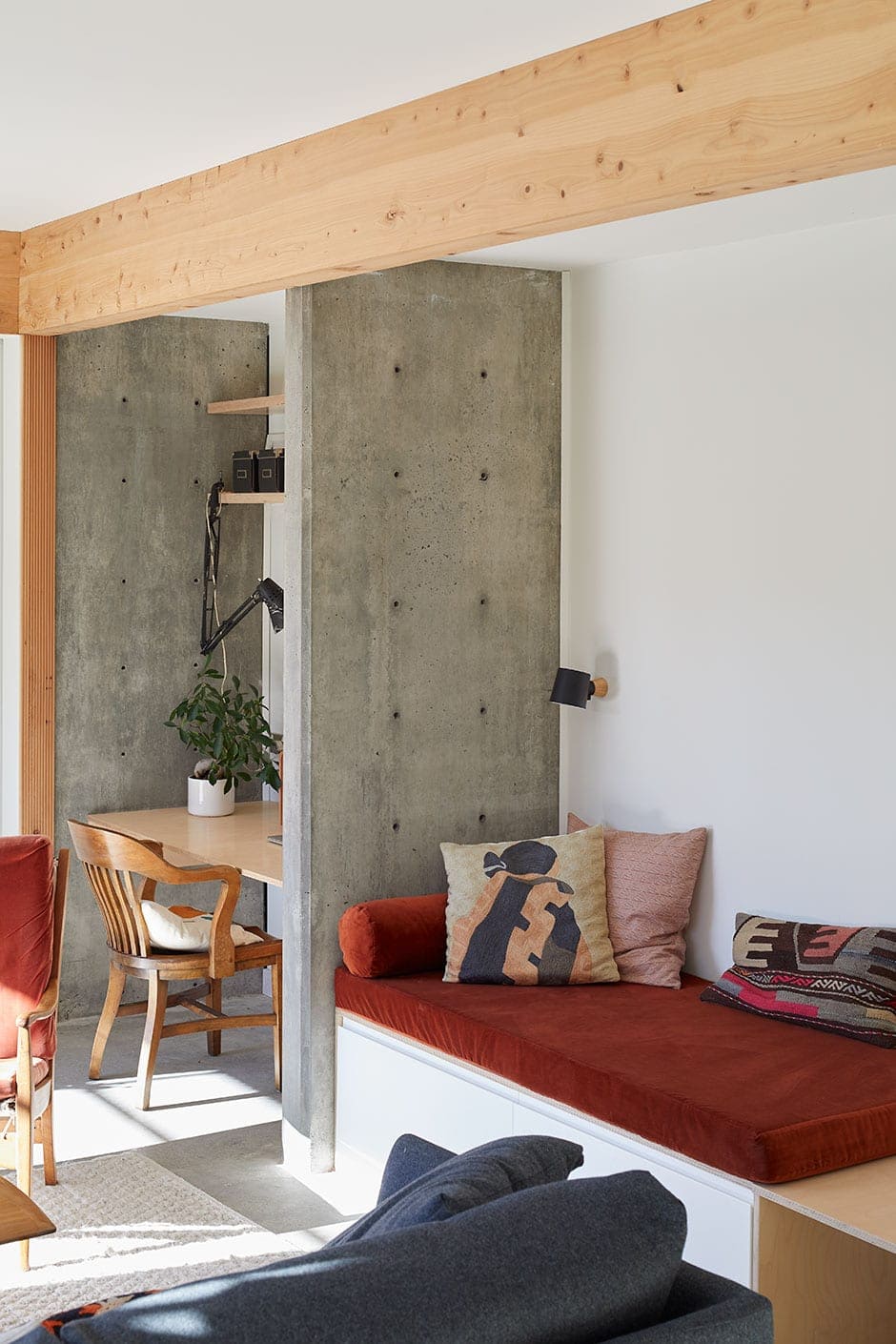 TOP Comfort and style collide in this inviting space, an aesthetic achieved by mixing old and new, including a sofa from Città, a rug from Freedom, and a chair with a Swedish-made antique base reupholstered in printed Cherokee fabric from James Dunlop Textiles. The cocktail trolley was spotted at a market in Oakland, California. Above it is an Aboriginal art print by Donna Burak that Amélie’s dad brought back for her 18th birthday from a trip to Australia. ABOVE Including built-in elements such as the desk and daybed, storage, shelving and vanities meant the couple could furnish their home simply and inexpensively. An ideal place to read day or night, the daybed is all the more comfortable for its rust-toned squab made by a friend, matching bolster Amélie’s mum crafted from offcuts, plus cushions including Dancing Girl by Canadian artist Irene Klar and a Moroccan-style find bought on Etsy.

The double-storey 140m2 home that now sits along an east-west axis basks in the northerly sun. It’s clad in Abodo, a heat-treated pine grown and made in New Zealand that’s an eco-conscious alternative to cedar. Patchwork Architecture’s trademark galvanised pipe balustrades and mesh screens run along the verandahs that shade the living areas and bedrooms in summer. They’re a lightweight solution that lends a sense of playfulness.
Internally, the concrete floor on the lower level acts as a heat sink — a concept so well-considered the couple abandoned the idea of a fireplace. It’s the hidden extras that count, of course: the above-average insulation, and a mechanical ventilation system that breathes fresh, dry air into a home designed to be almost airtight. 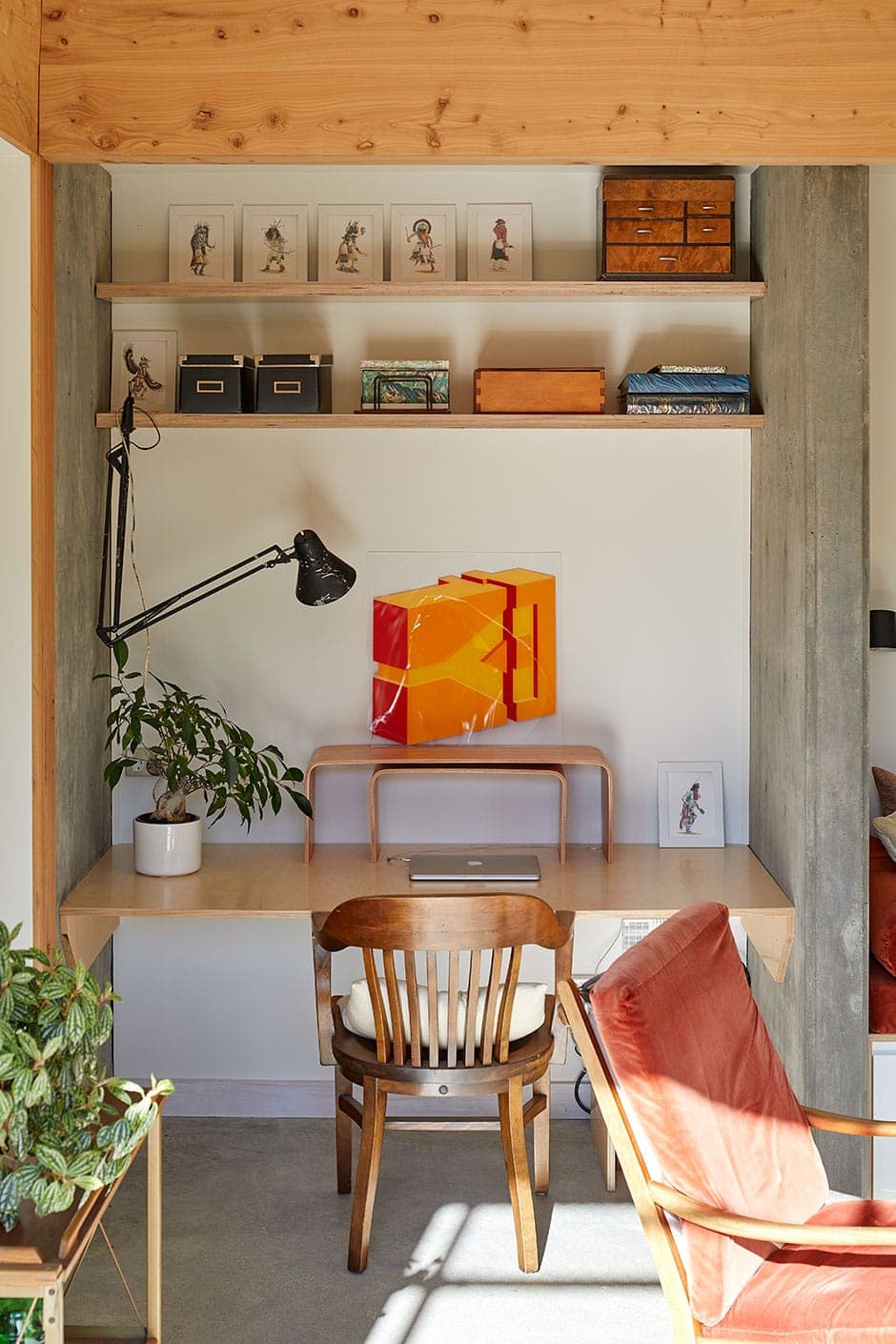 ABOVE Amélie made the desk with help from her lovely assistant, Karl, and bought the shelves online. The walnut chair under the desk came from the Alameda Point antiques fair in California; its classic character is countered by a contemporary artwork by Adan Contreras and prints by Danny Lanza from the National Museum of the American Indian in Washington DC. The lamp was used by Amélie’s dad when he was studying in the Netherlands in the ’60s, and the rosy Cintique chair is an heirloom from Karl’s parents’ place.

The practicalities are matched by beauty. In the main living zone, the poured concrete buttress walls are standout features, laminated veneer beams slice through the space and the timber-clad walls have an eye-catching texture. “They’re a low-grade macrocarpa that was destined to make beehives,” says Karl. “We loved its knotty look and Ben had the great idea to get the wood grooved.”
The kitchen, too, is a focal point, and Amélie can claim much of the credit for its good looks — she sized up components then ordered flat-pack carcasses from Ikea in Europe. This white base was enhanced with plywood doors and shelving that she made herself in a woodworking class. A splashback pegboard painted green is a simple and stylish solution for hanging utensils. 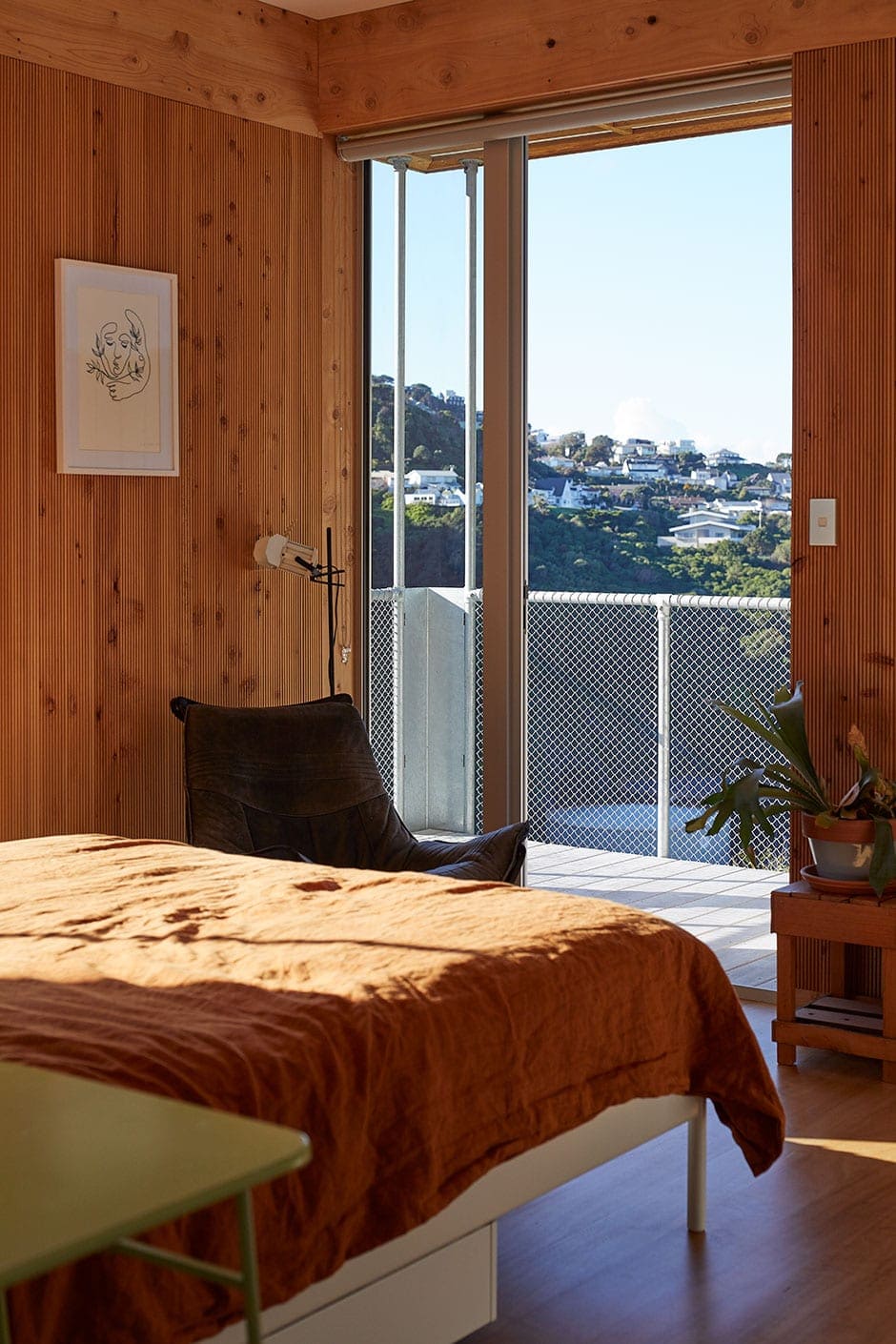 ABOVE Upstairs in the couple’s room (where the Tobacco duvet by Foxtrot Home ties in with the colour scheme downstairs), they can take in the view towards Khandallah while seated in a chair that once lived in the former New Zealand ambassador’s residence in France. The framed sketch behind it was a collaboration between abstract artist La Chapardeuse and stylist Yvette Edwards, and Karl made the stool from reclaimed fir when he was living in California.

Achieved for $480,000, this is a family home that’s warm, dry, comfortable and filled with heart. Karl and Amélie certainly learned a lot about green design — and about themselves. “I discovered how much mental capacity it takes to build your own house and juggle a job and a baby,” says Amélie. Karl was so exhausted by the time the Grand Designs director called time that he had to take several weeks off work.
The couple’s daughter, Claudie, may not realise she’s living in a supremely energy-efficient home but she has plenty of her own to expend. That includes clambering up the ground-floor balcony railings, swinging with a view of the Ngaio Gorge as a train clickety-clacks by, and donning her superhero cape as she dashes off on her own missions to save the world.