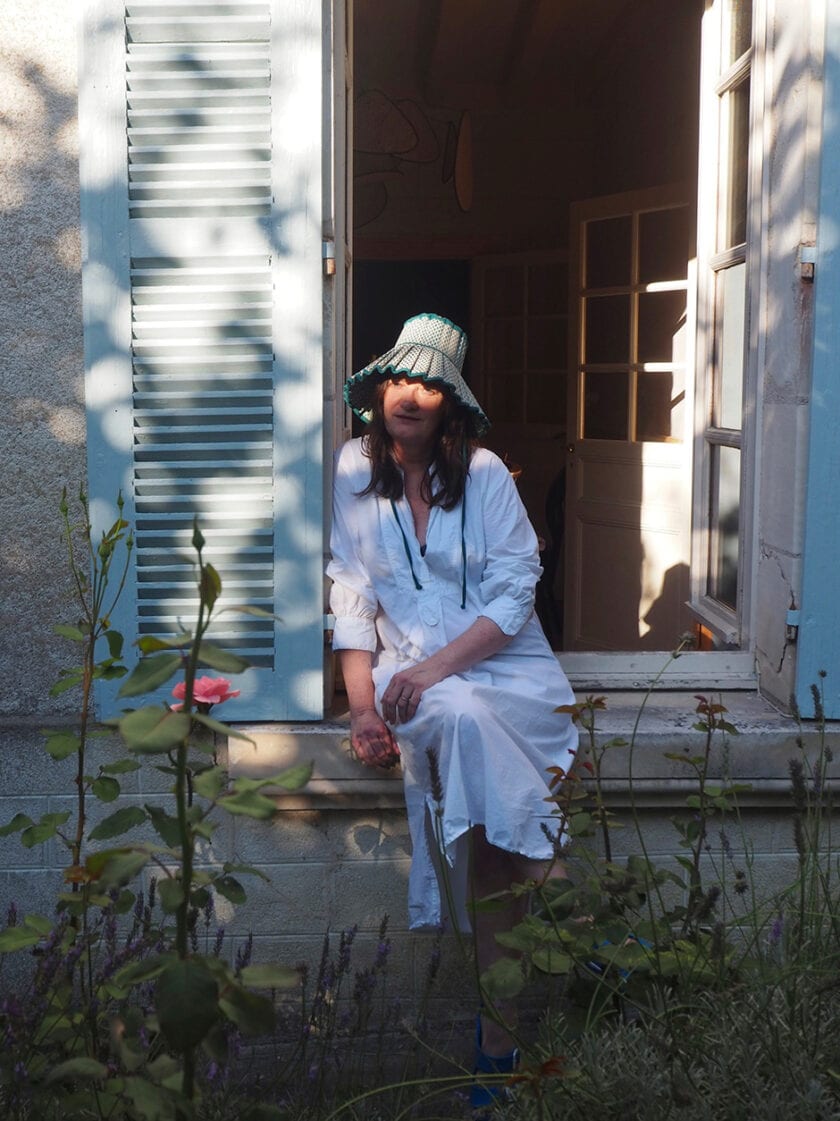 As she prepared to open her first Paris boutique, the Kiwi bridal designer told us about her new home in rural France.

It was a classic standing-over-the-kitchen-sink moment. What if we sold our house and moved to the French countryside? Houses are cheap, I’ve looked online. A La Robe mainly sells to the US, I could run my business from anywhere…
It took my partner Marc and I a few years to get a plan together, sell our house in Titirangi and fly from Auckland to the French embassy in Wellington to apply for visas. In the meantime, I attended the Alliance Française to get my school French back on track, and went on a house-hunting mission after a business trip to Paris. It all started to seem doable. 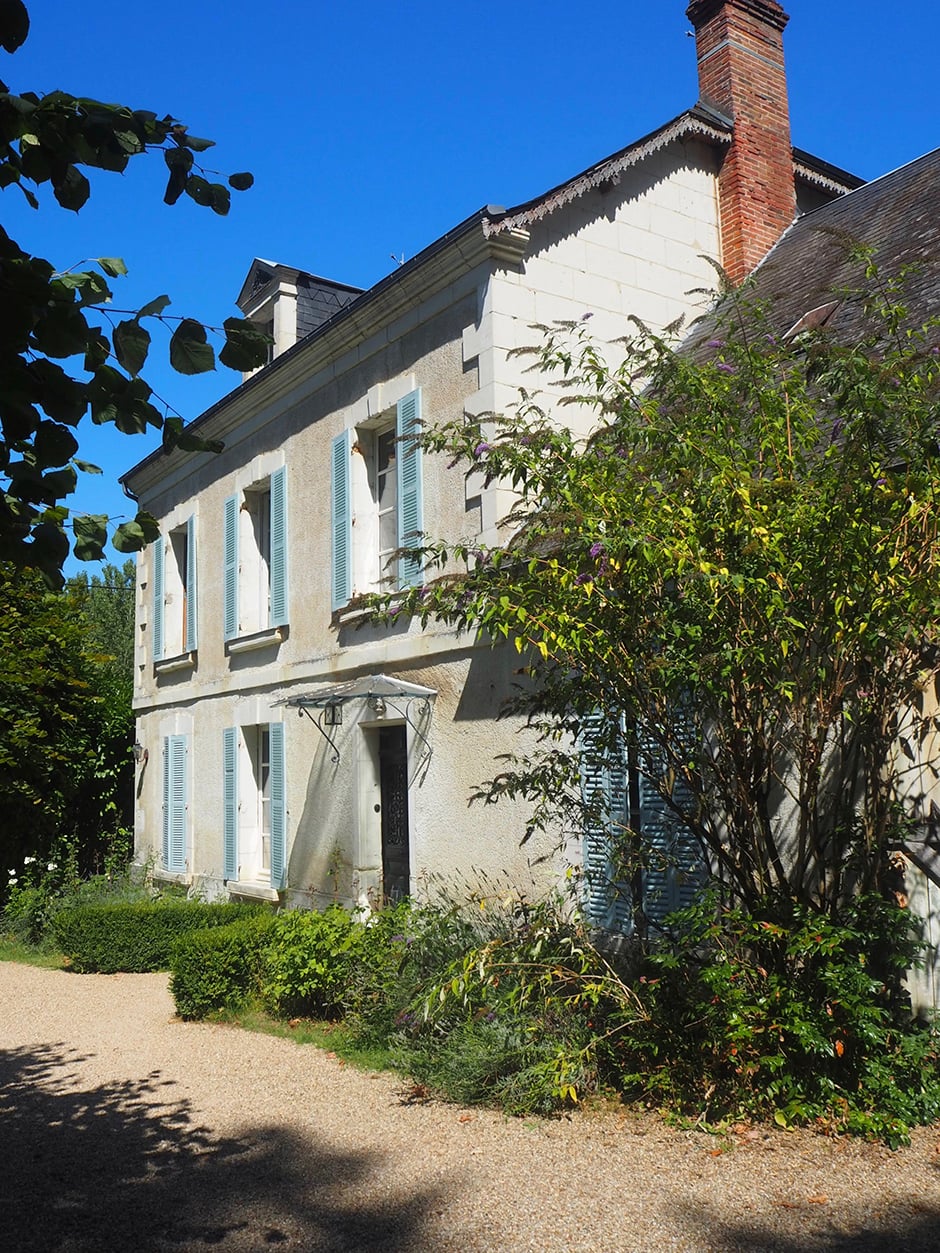 ABOVE Painting their home’s shutters blue has been the couple’s only renovation project to date, but more will surely follow.

Finally, two weeks before Christmas 2016, we handed over the keys to our house, had our dogs picked up by a shipping company and headed to the airport. With one-way tickets to Paris and a rural cottage rented, there was no looking back. 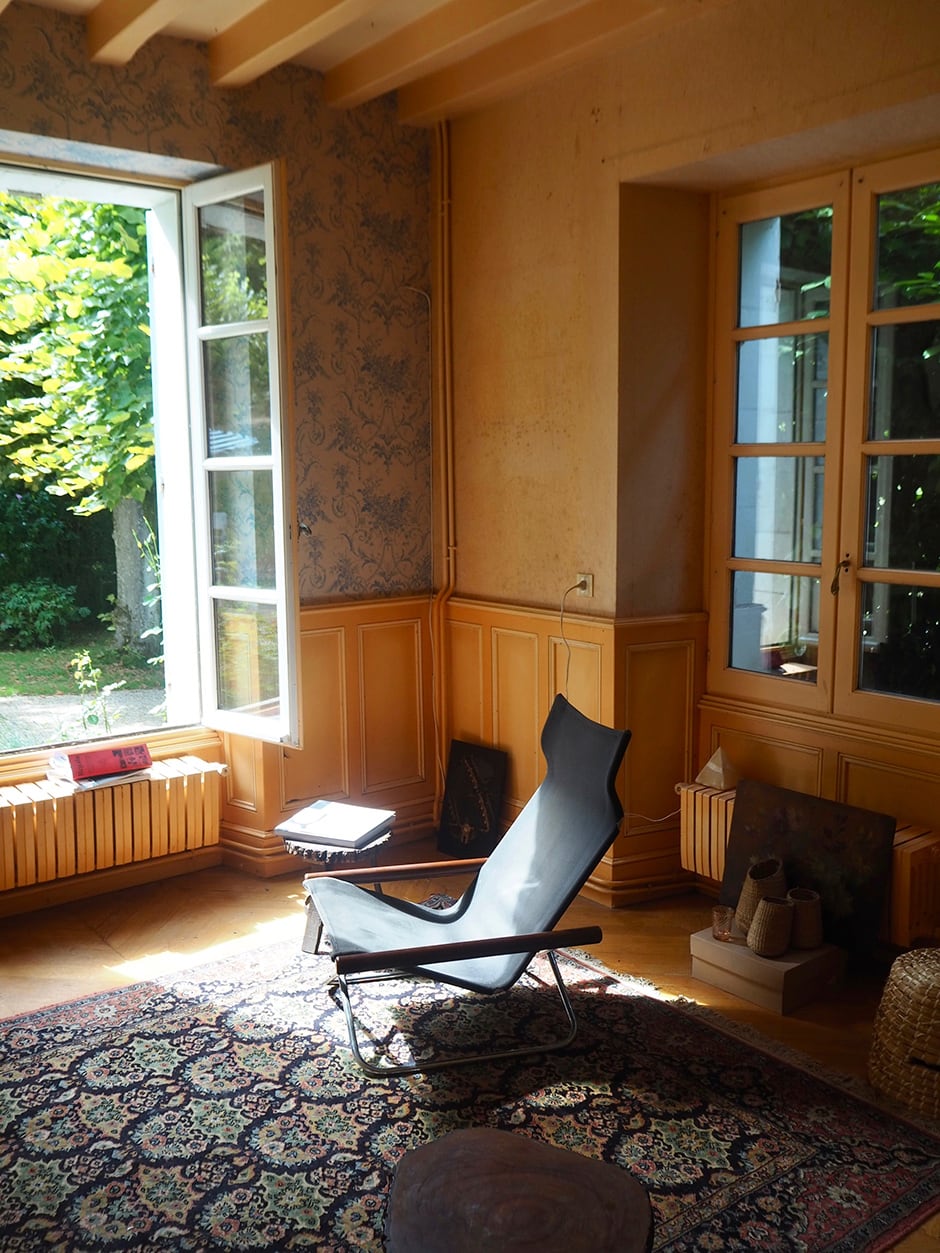 ABOVE The rug in the séjour (living room) came with the house — the couple found it in the attic. Their NY folding chair was conceived in 1958 by Takeshi Nii. “It’s a design classic and very comfortable,” says Elizabeth.

And we love it! Valençay has a population of about 2500 and is known for its château; you can find our house from the village by following the château wall. It’s the only village in France with two appellations: one for goat cheese in the shape of a pyramid and the other for the local wine — both delicious. The surrounding countryside is beautiful and the weather is mild, although temperatures reached 38ºC this summer and we had a little snow one winter. 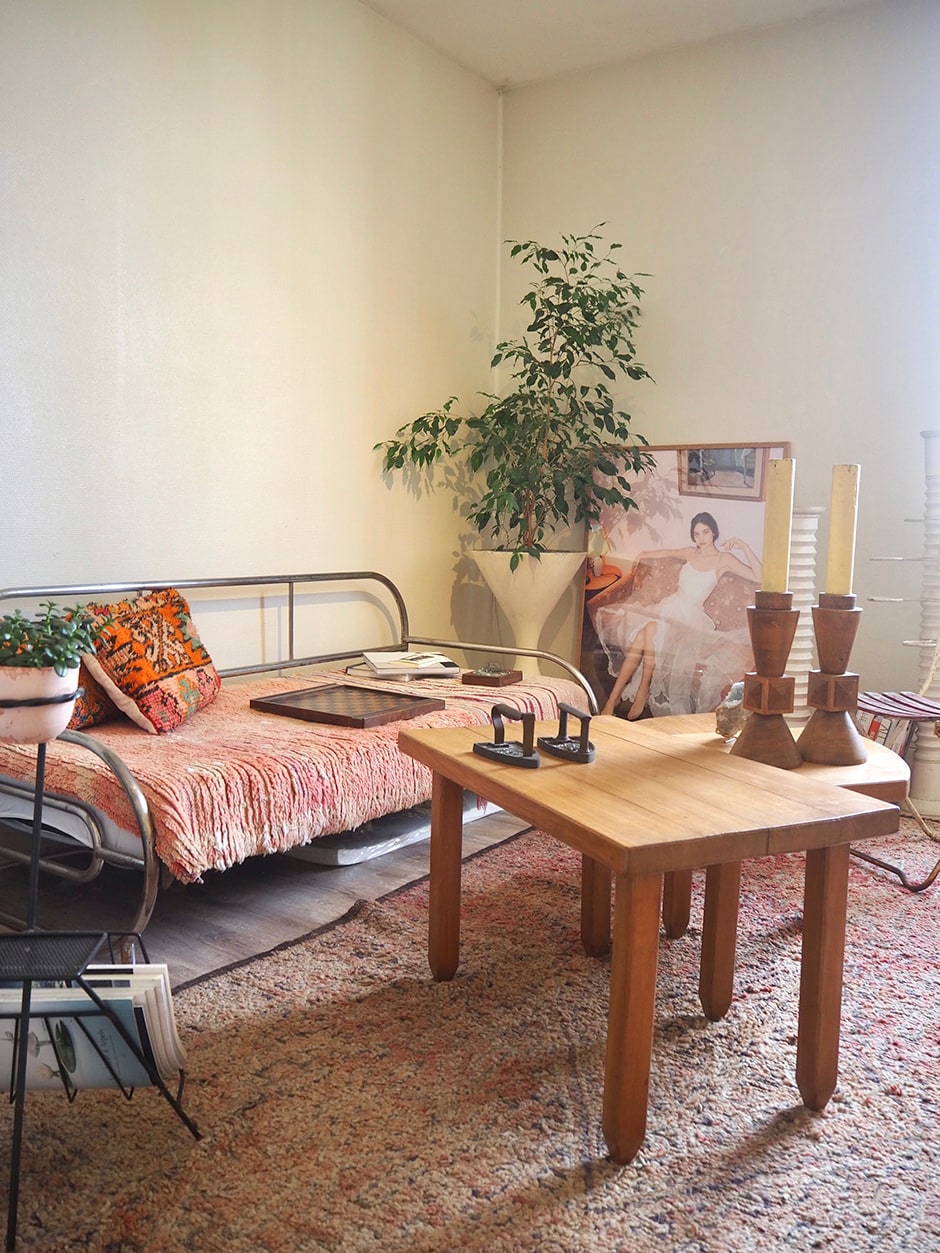 ABOVE The main room in Elizabeth’s atelier, 2km from the house, is decorated with a 1930s Czech daybed; a three-layer, fold-out ’60s oak table bought from a dealer in Paris; old irons Elizabeth uses as weights when cutting her bridal creations, candlesticks from the local antique dealer “probably from a church” and a Diablo planter by Willy Guhl (“They’re very sought after, but people in the countryside have them sitting in their gardens,” says Elizabeth). The A La Robe 2019 campaign photo was shot in Paris by Alli Oughtred.

We’re very close to the Loire Valley, so we often take day trips to incredible places, such as Château de Chambord and Amboise. Paris is a mere 40-minute drive to the train station and  two-hour train trip to Gare d’Austerlitz — we can be there for lunch.
Two years after we arrived, Marc and I felt so settled in the village we’d randomly ended up in that we decided to buy a home of our own here. A two- storey maison bourgoisie [comfortable home] just outside the village had caught my eye — and one day it came up for sale. When we first visited it, every wall from floor to ceiling was hung with paintings, and bookcases filled every room, but it had a sensible layout and a decent kitchen, and the garden was lovely, even in winter. 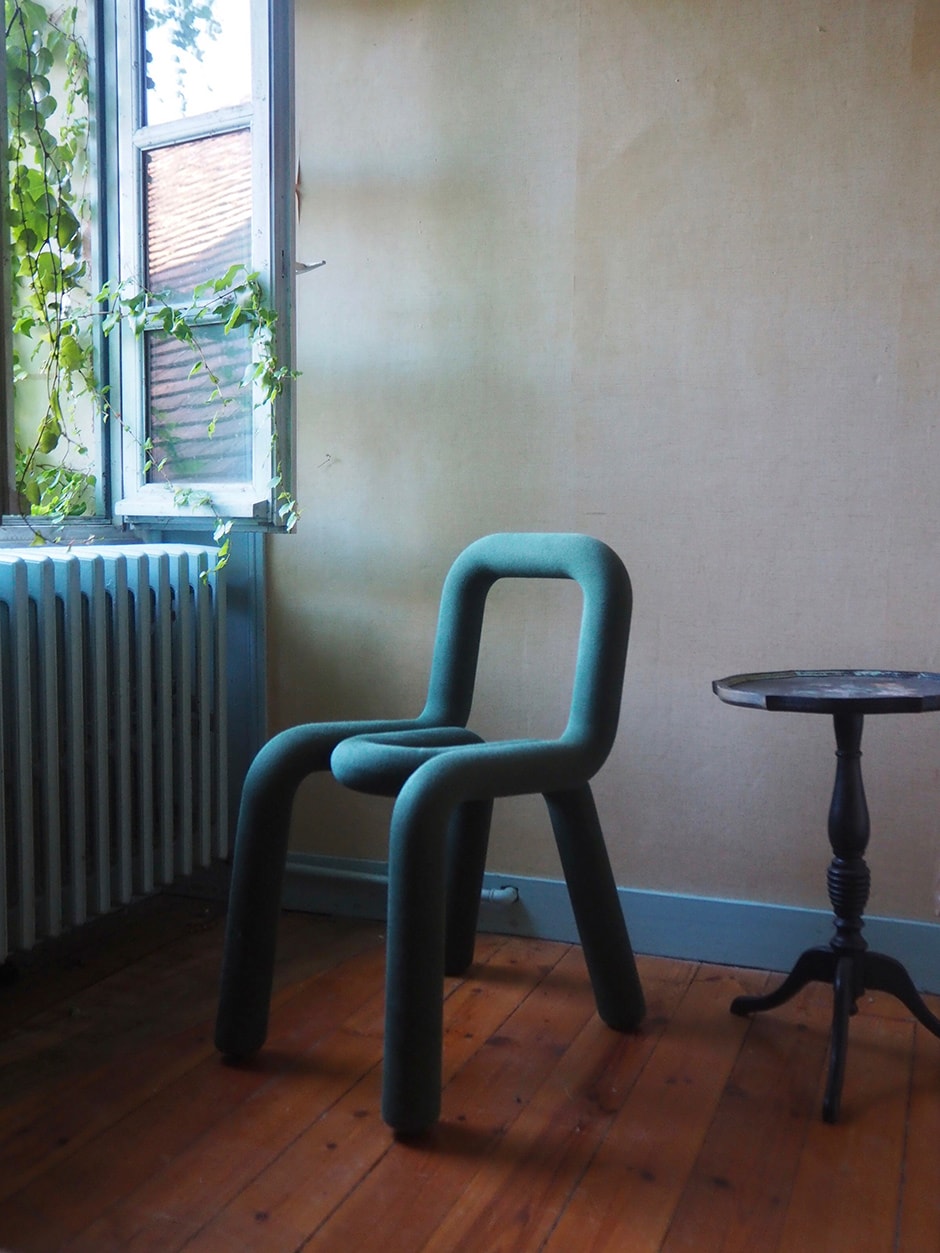 ABOVE A Chaise Bold chair by Big Game (with a changeable fabric cover) takes in the view from the guest bedroom at the back of the home.

The property is just over two acres, with its own bois — a little wood with lots of old oak trees. The house has three bedrooms, two bathrooms and an enormous attic. It’s a shady house; the light is soft — very different from what we knew before.
We painted the shutters blue when we moved in last summer, but that’s pretty much all we’ve needed to do by way of upgrades. The house was renovated in the 1980s, so it has good floors and double glazing. 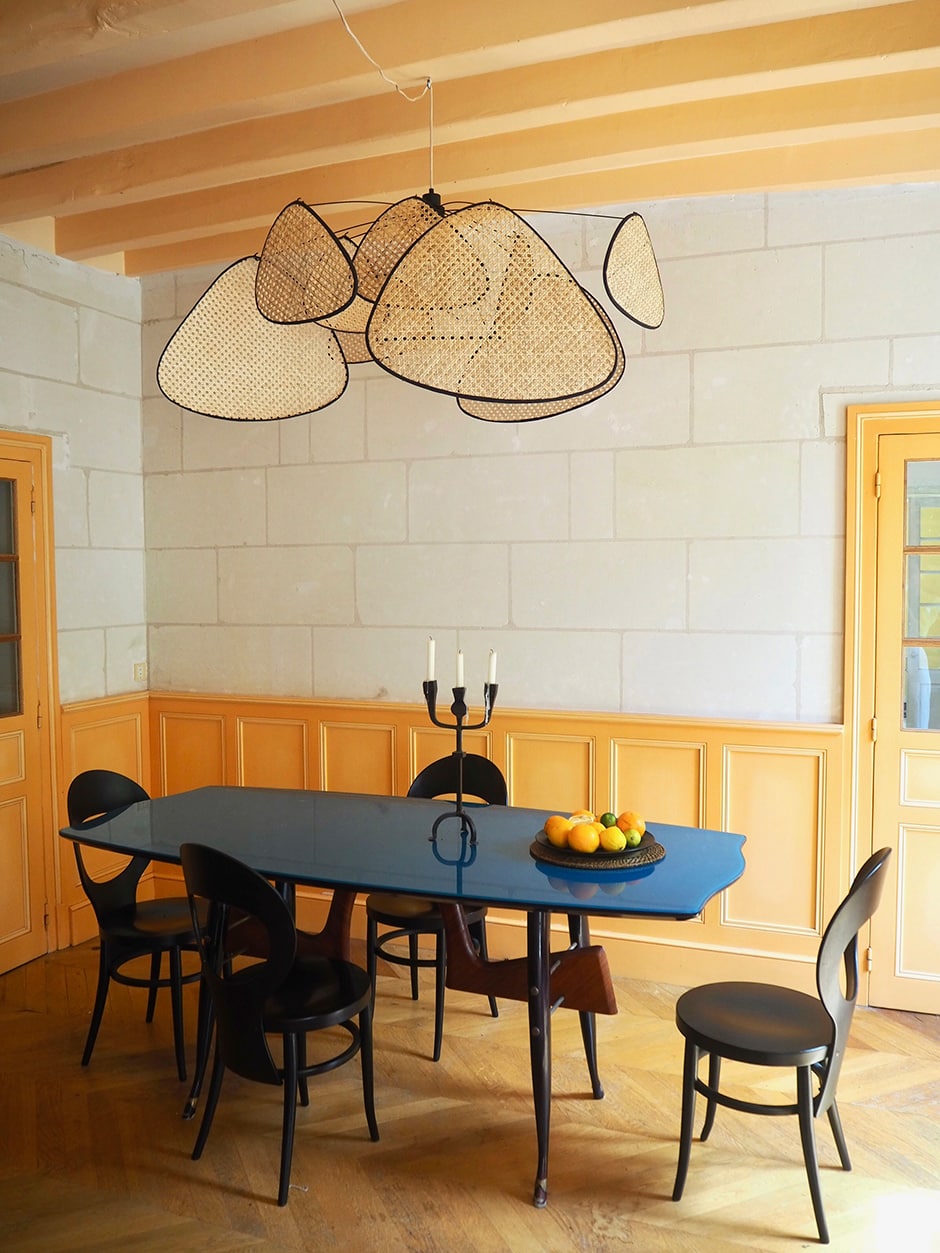 ABOVE Elizabeth styled their ‘50s dining table with Mouette chairs by Baumann and a Cannée Screen light from ruevintage74.com. She says the walls in this room are bare stone, “same as at the Valençay Château, so probably from the quarry in the château grounds.”

We’ll probably get rid of the many ‘charming’ shades of peach paint, but at the moment it’s very French and we just want to live in the house and do things slowly. I’m also in love with the patina — layers of paint on old wonky doors, electrical switches in odd places, shadows from paintings on the bedroom wall, that kind of thing. I don’t want to make it all new, so anything we do has to blend in. 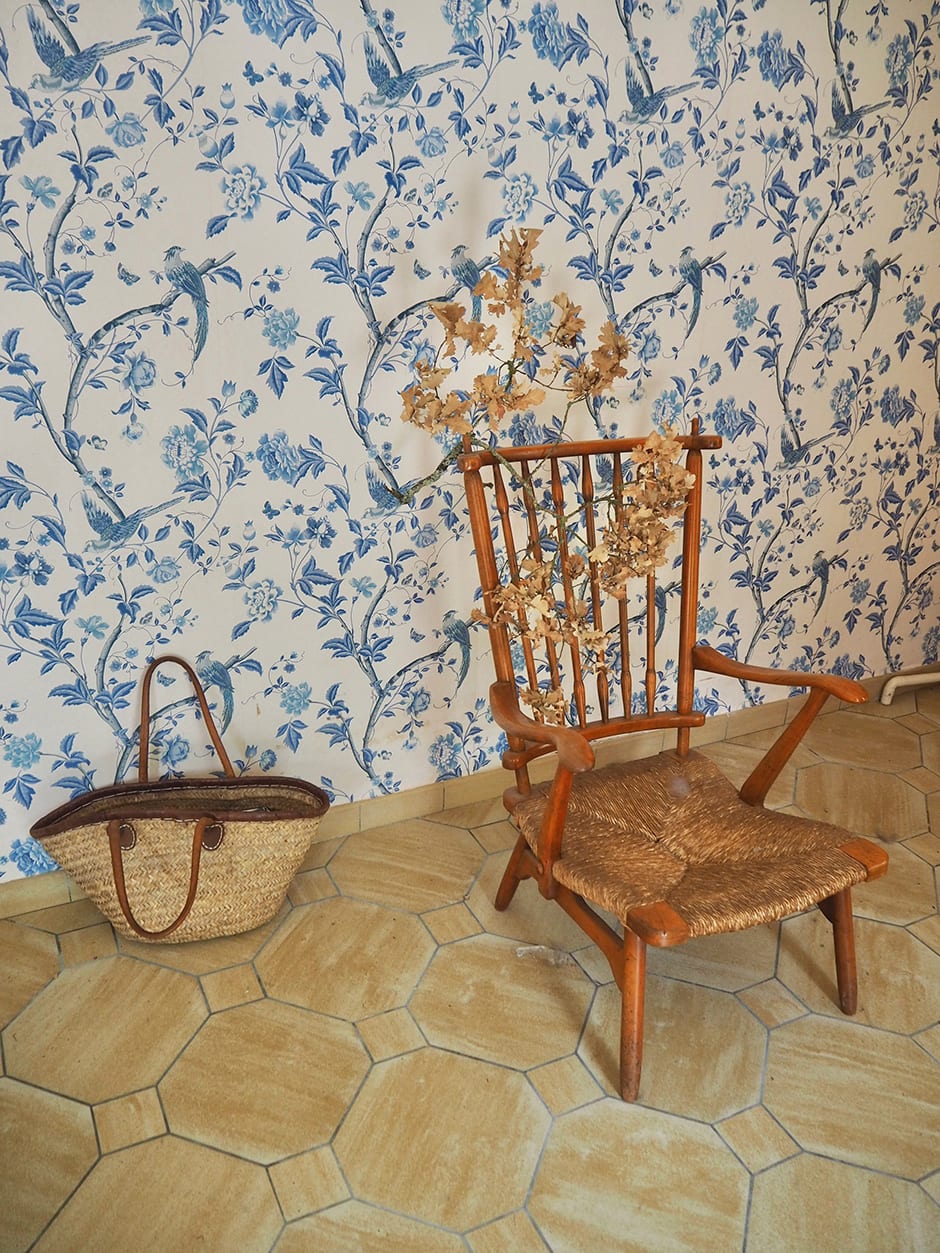 ABOVE The home’s previous owner collected vintage Laura Ashley wallpapers like this one. Elizabeth has styled the 1960s Dutch chair with a oak branch and bought the market bag for €4 at a weekend brocante. “There haven’t been any brocantes this summer because of the virus — and I really miss them,” she says. “It was a way for the villagers to socialise with one another and sell anything they no longer wanted, in the tradition of recycling and reselling. Even when you take an old appliance to the dump, they inspect it to see if it can be refurbished.”

My decorating theory is that if we only buy what we really love, it’ll all work together — and so far, so good. Long before we bought our house, I found a 1950s Italian dining table at the St Ouen Clignancourt market in Paris. It’s a curved rectangular shape, with a glass top painted blue, and I teamed it with chairs bought at the same market. In the weekends, we’ll often go to local village brocantes [flea markets] and have had a few good finds, including the lamp stand for €25 restored and rewired by Marc that’s identical to one I later saw priced at €1900 in Paris. I rent an apartment in the village to use as my A La Robe atelier. It’s good to have a separate workspace — I like leaving the house to go to work. However, the hammock we hung between two oak trees in the wood is my favourite place to be. 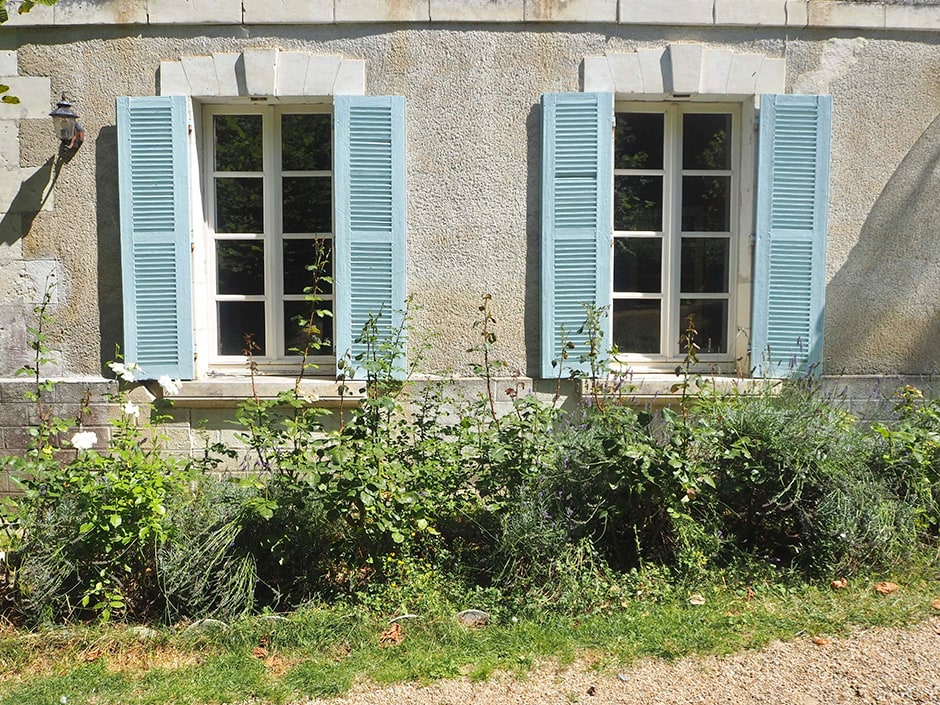 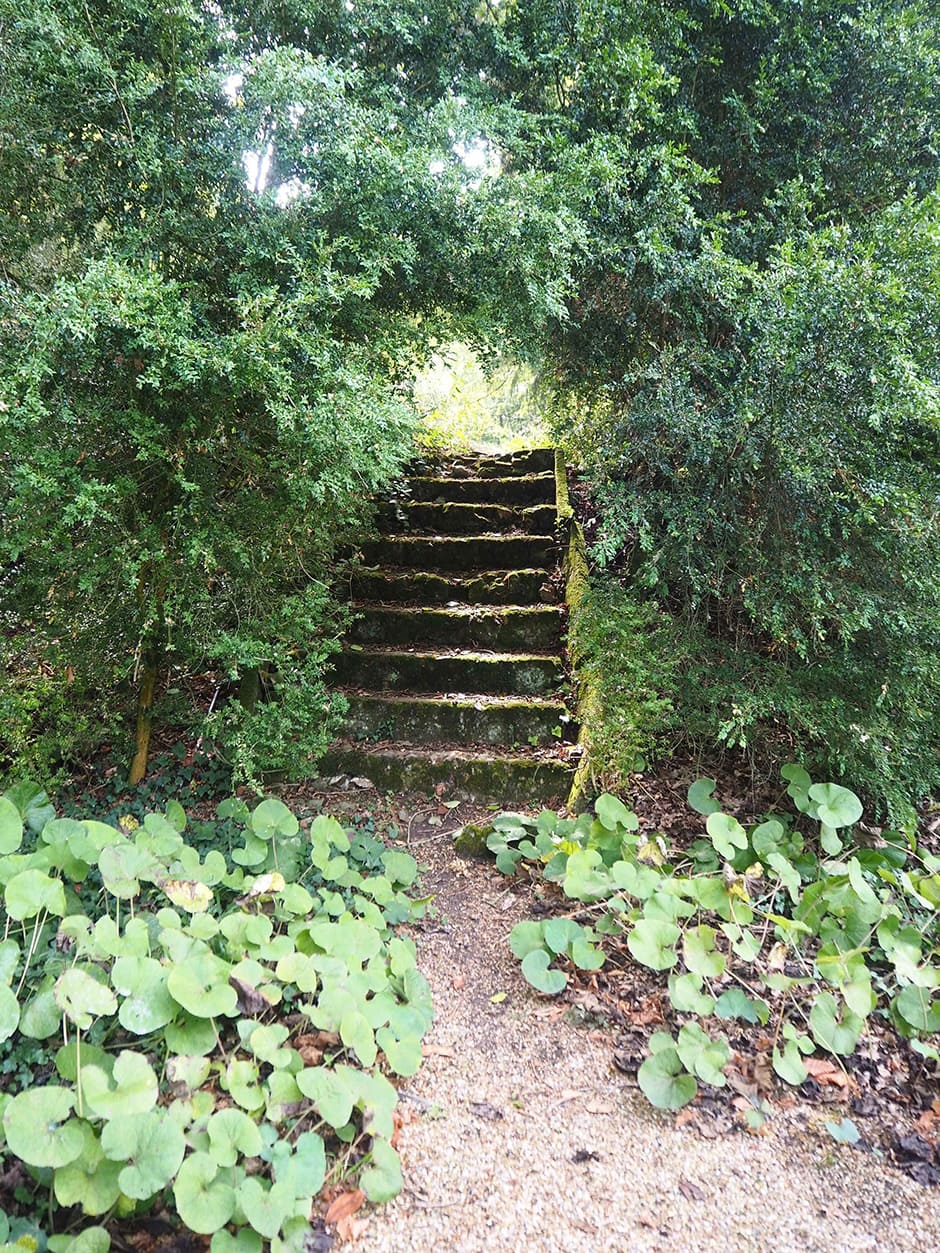 We lived in the suburbs before, so of course it’s different in the countryside, but also on the other side of the world, everything is new. The birds in the garden — cuckoos, owls and robins. Frogs wake us up at night. There are strange fruit and vegetables in the supermarket; we did a lot of translating while shopping when we first got here. 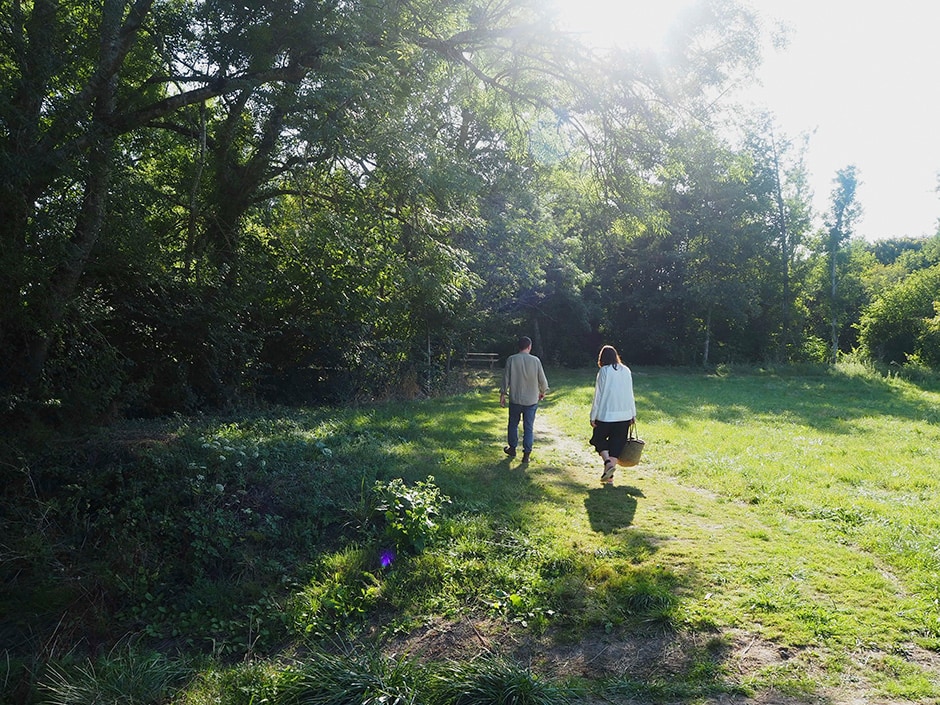 ABOVE After work, Elizabeth walks down from the village to meet Marc walking their dogs, a Scottish deerhound and an Italian spinone. Marc worked as a creative director in New Zealand, but without a permit to work in France, he’s now an arborist and woodworker, and Elizabeth says, “He’s not complaining! We have 100-year-old oaks, very tall pine trees and sprouting hazelnuts everywhere in our bois, so he’s busy taming the forest. Everyone in the countryside with land is proud to live off the terroir, their own property, as much as possible.”

I like the idea that Marc and I have consciously chosen where we want to spend the next part of our lives. I think we’ll stay here forever. We really considered what we thought we needed to be truly happy and did our best to find it. There have been hard times, but the whole adventure has been overwhelmingly good. In September we’ll open our A La Robe bridal boutique in Paris. It’s small with a classic wooden façade — very Parisian with high ceilings, white walls and parquet flooring. By rendezvous only!
alarobe.com