A riverside Hamilton home that lets the outside in

Thanks to its clever joinery, this city-fringe home feels like it’s a world away.

A house in the country was something Zandra and Robert Dol had envisioned for their family for quite some time. After moving from Auckland to Hamilton, they’d been steadily looking for a slice of rural land, but when the right property failed to materialise, they decided to press pause. Life as working parents raising daughters Sophia (12), Ella (10) and Mila (8) continued as usual, until a riverside site unexpectedly presented itself as the perfect match, making life that little bit easier by providing the natural environment they dreamed of just a short drive from the city.
Friends of the family had previously owned and planned to build on the property in the neighbourhood of Flagstaff, which borders the Waikato River. With architectural drawings already created by Tane Cox of Red Architecture, the hard work was taken out of figuring out what to do with the wedge-shaped section that slopes down to the water’s edge. 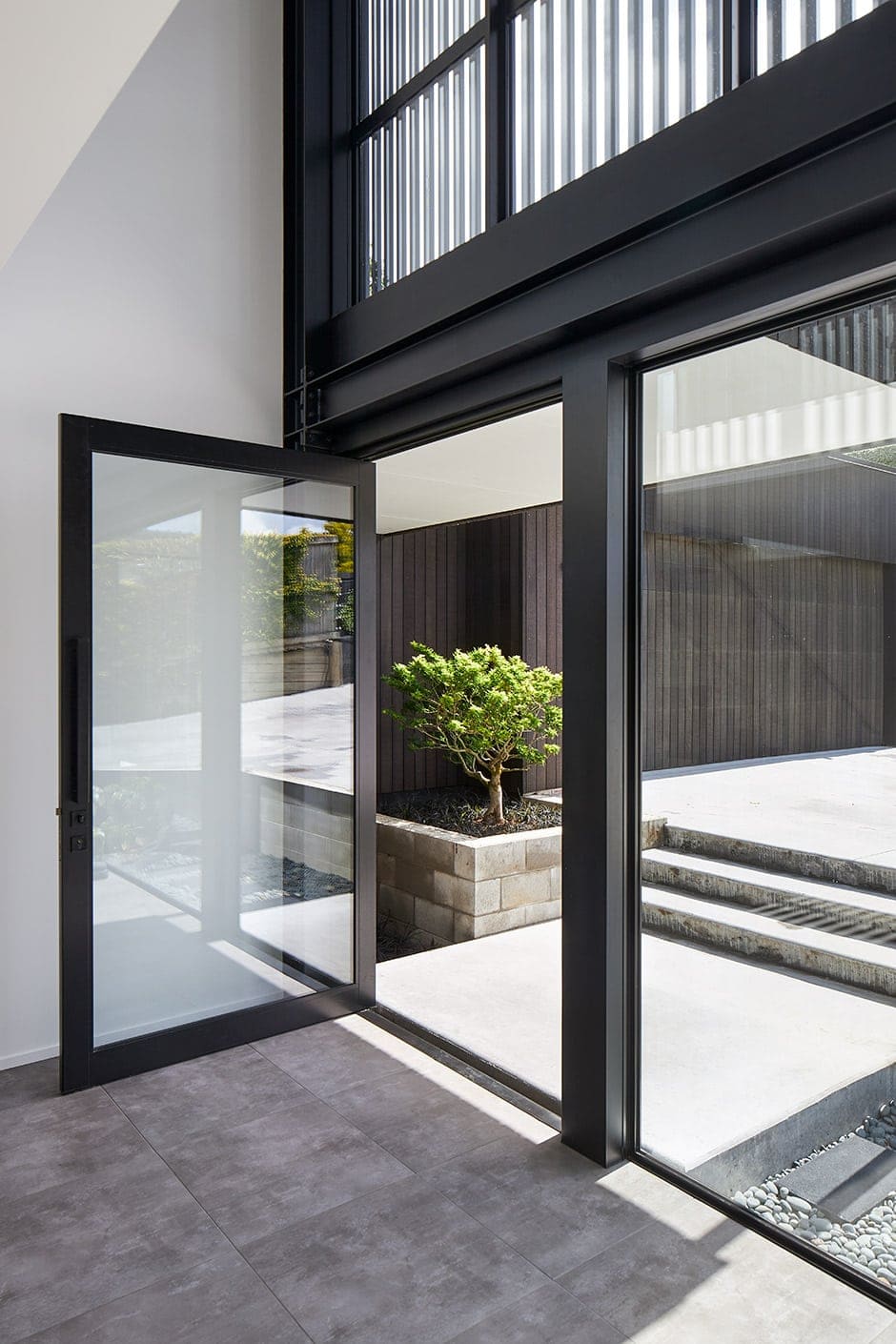 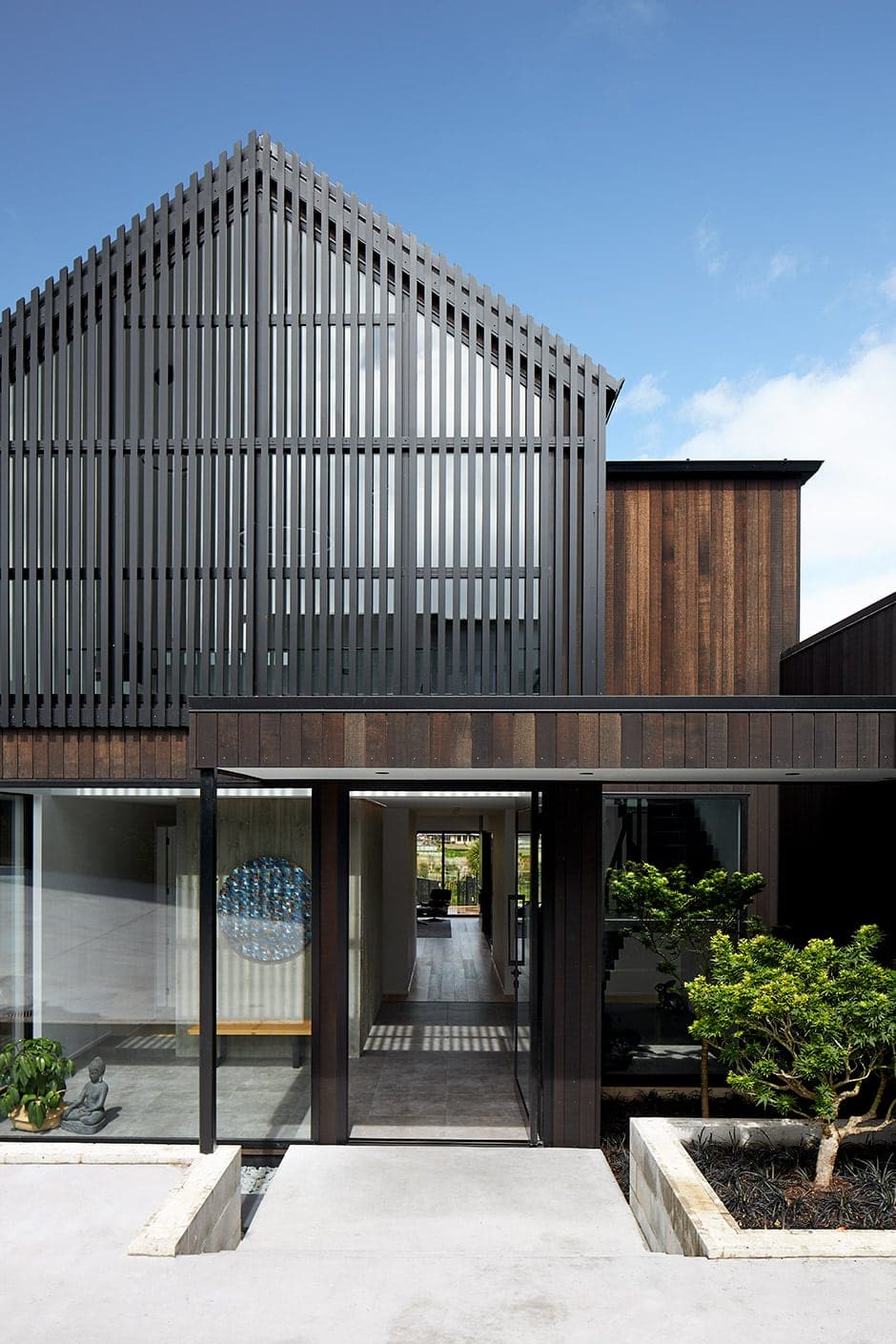 MAIN IMAGE An expansive 21-panel grid of fixed Metro Series windows by First Windows & Doors opens the room onto a green wall — a much more attractive prospect than the neighbours’ fence. The joinery throughout the house is powder-coated in Matt Black with colour-matched Urbo hardware. ABOVE The large Metro Series pivot front door was an idea Zandra added to a Pinterest moodboard years ago, so she’s rapt that it works so well with the battened aluminum screen and floor-to-ceiling windows at the front of the house.

“When we came here and saw this beautiful outlook, the view with the river flowing by really sold us,” says Zandra, a holistic health practitioner. “It’s really peaceful and felt right, and the plans also met our expectations of the home we wanted to create for our family.” 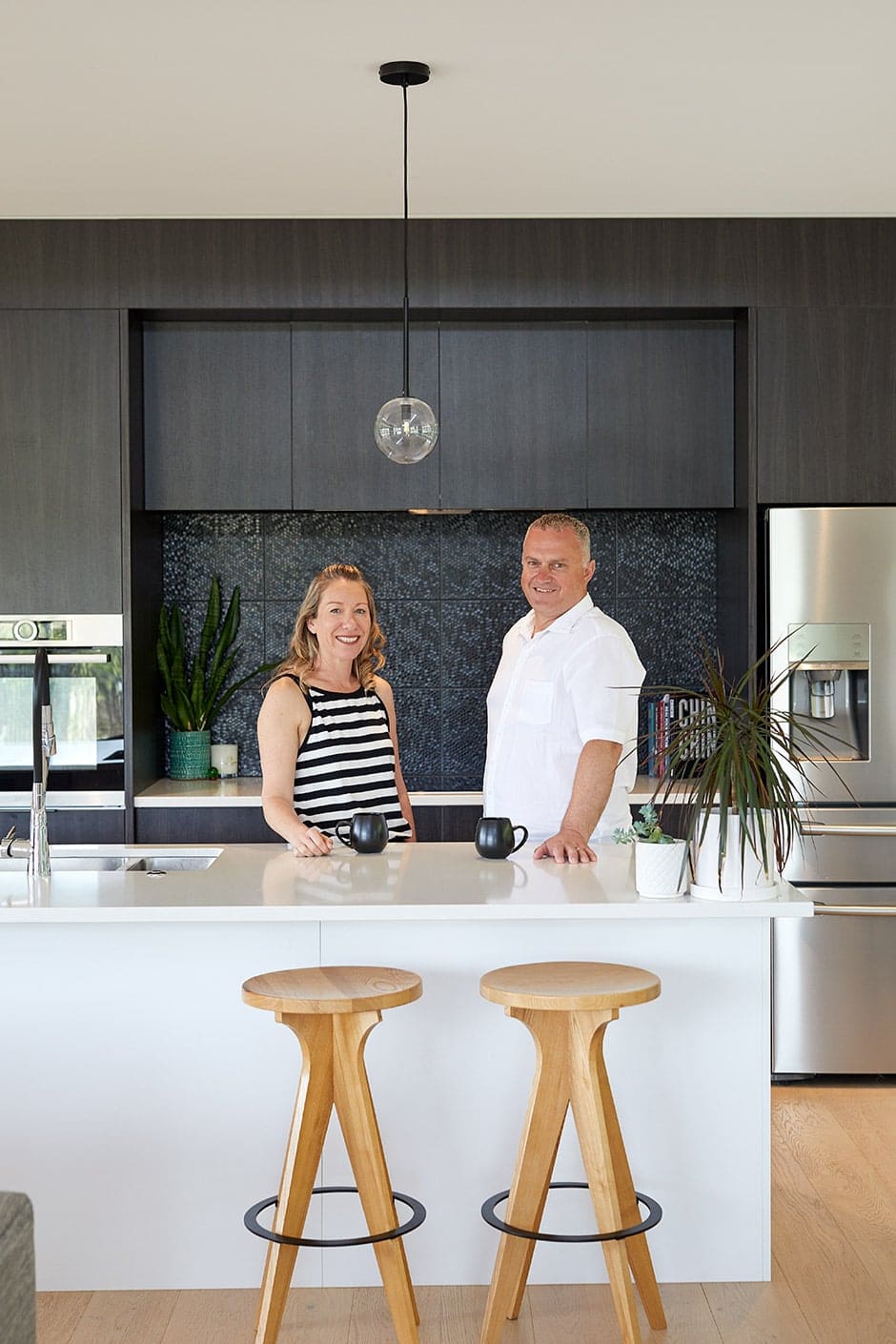 Of his design, Tane says: “One of the site challenges was the narrowness, and its falling contour. It really looked like a site that you could not fit a lot on. To address this, a series of cascading floors and a central pitched pavilion formed the basis around which the house was organised. Lower, flat-roofed structures surround the more vertical two-storey structure. From the outside, large glazed areas let in an abundance of light while providing a connection with small private gardens to give a broader sense of defined interior space.” 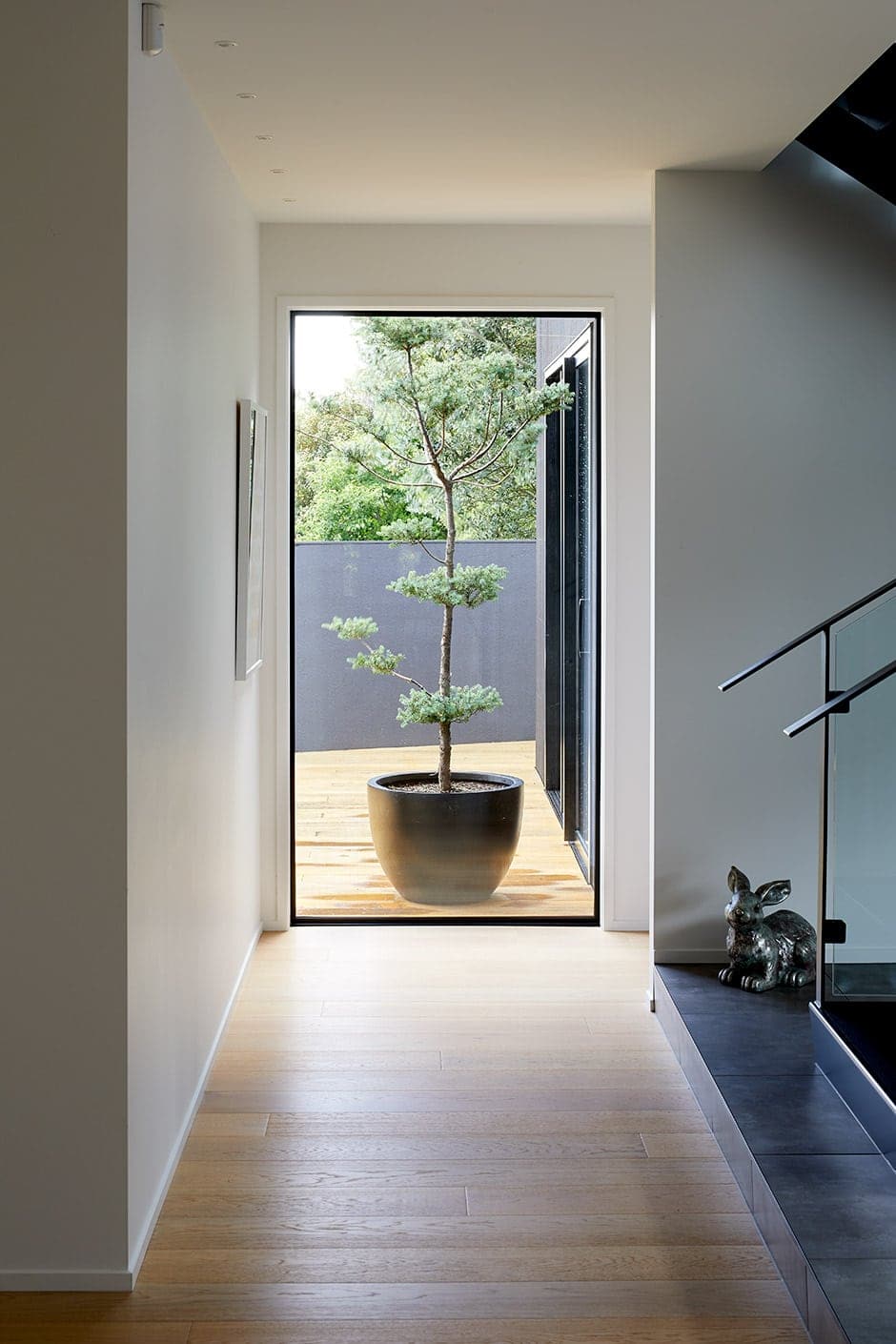 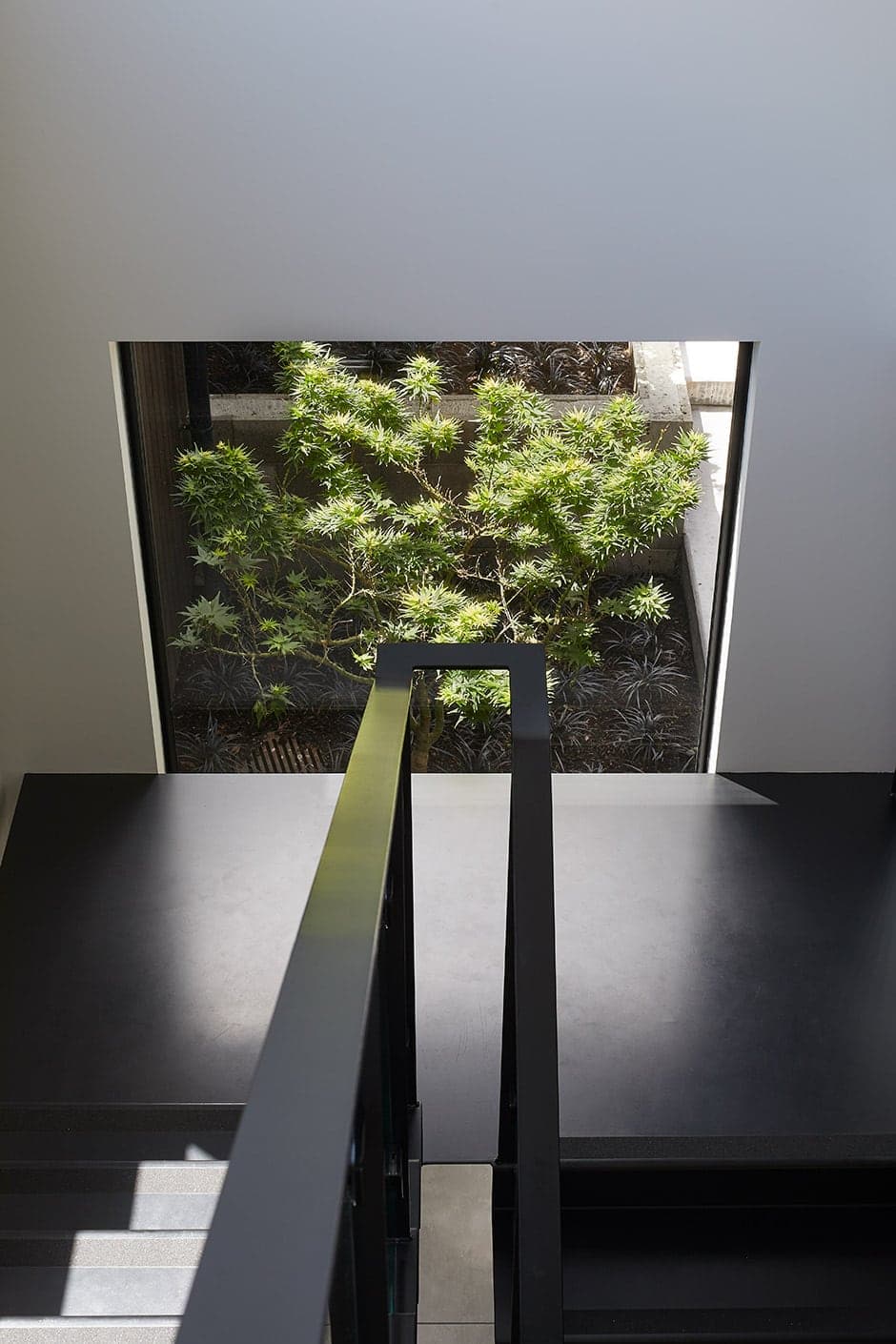 ABOVE Passages linking the communal and quieter areas of the home feature Metro Series picture windows that reveal the Japanese-inspired planting the couple worked on with local expert Graeme Burton of Rukuhia Homestead Landscaping.

From breaking ground to moving in, the process took 12 months. Having worked in the construction industry for 25 years, Robert is well-versed in the technical side of building and chose to engage the expertise of CJW Build. “Craig Wallace and his team are real craftsmen,” he says. “We didn’t want to micro-manage them, so we paid them to take care of the project management as well.”

ABOVE The main living area steps down to a media room, the open connection allowing conversations to continue between the two.

There were still plenty of decisions for the couple to deliberate over along the way, but Zandra’s sister Vicky Sutton of Harmony Interiors was on hand to help fine-tune their ideas for a monochromatic interior palette that would be robust enough to endure the rigours of family life while bringing a sense of softness to counteract the home’s boxy architectural forms. 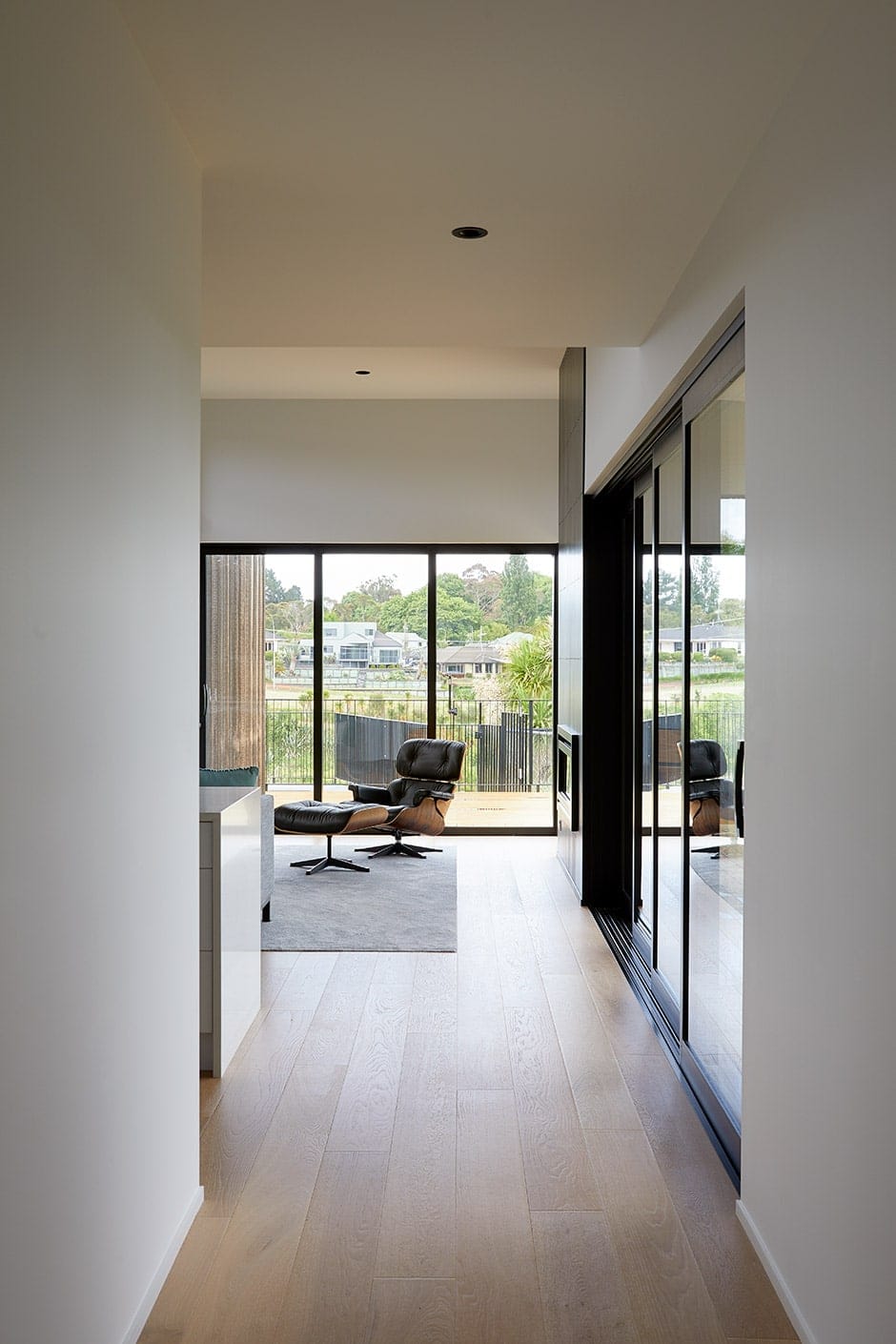 ABOVE “Glazed windows are important for light, but the ‘working’ parts of the house are intentionally set in deeper to ensure maximum privacy,” says architectural designer Tane.

Tane’s central pavilion makes a strong statement at the bottom of the driveway. Entering the home, wall-to-wall glass surrounds an entry hall where shards of light filter through a battened aluminium screen that runs across the upper-floor windows, for the complementary delivery of both light and privacy. 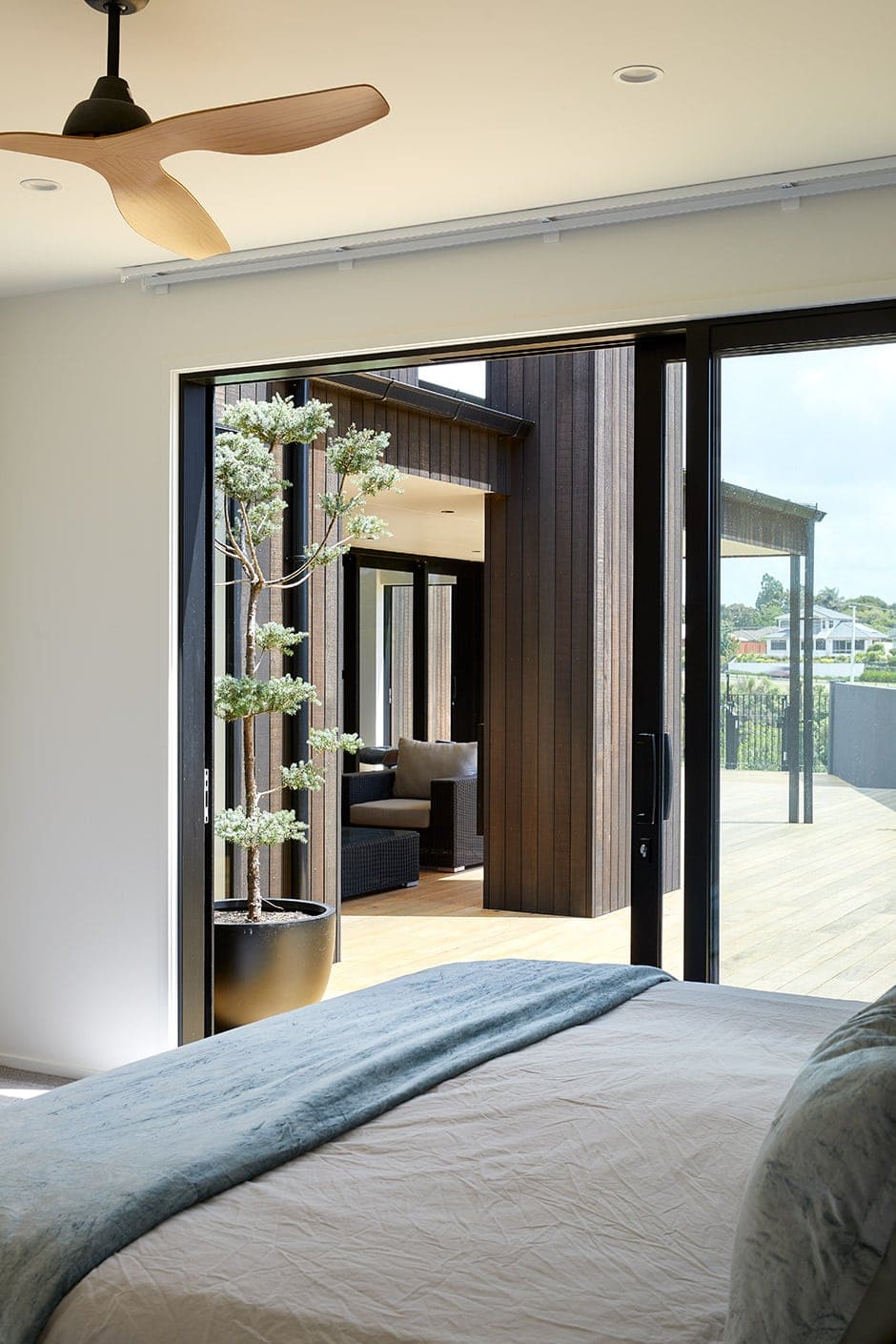 ABOVE Occupying their own corner of the home, the couple’s bedroom and ensuite are a private haven separate from the kids’ zones.

Cleverly positioned joinery from First Windows & Doors connects interior to exterior, including a wide bank of fixed windows that gives the dining area a dramatic green backdrop, picture windows that frame Japanese-inspired planting and five stacking sliders that join the living area to the deck on which the girls spend hours honing their football skills. 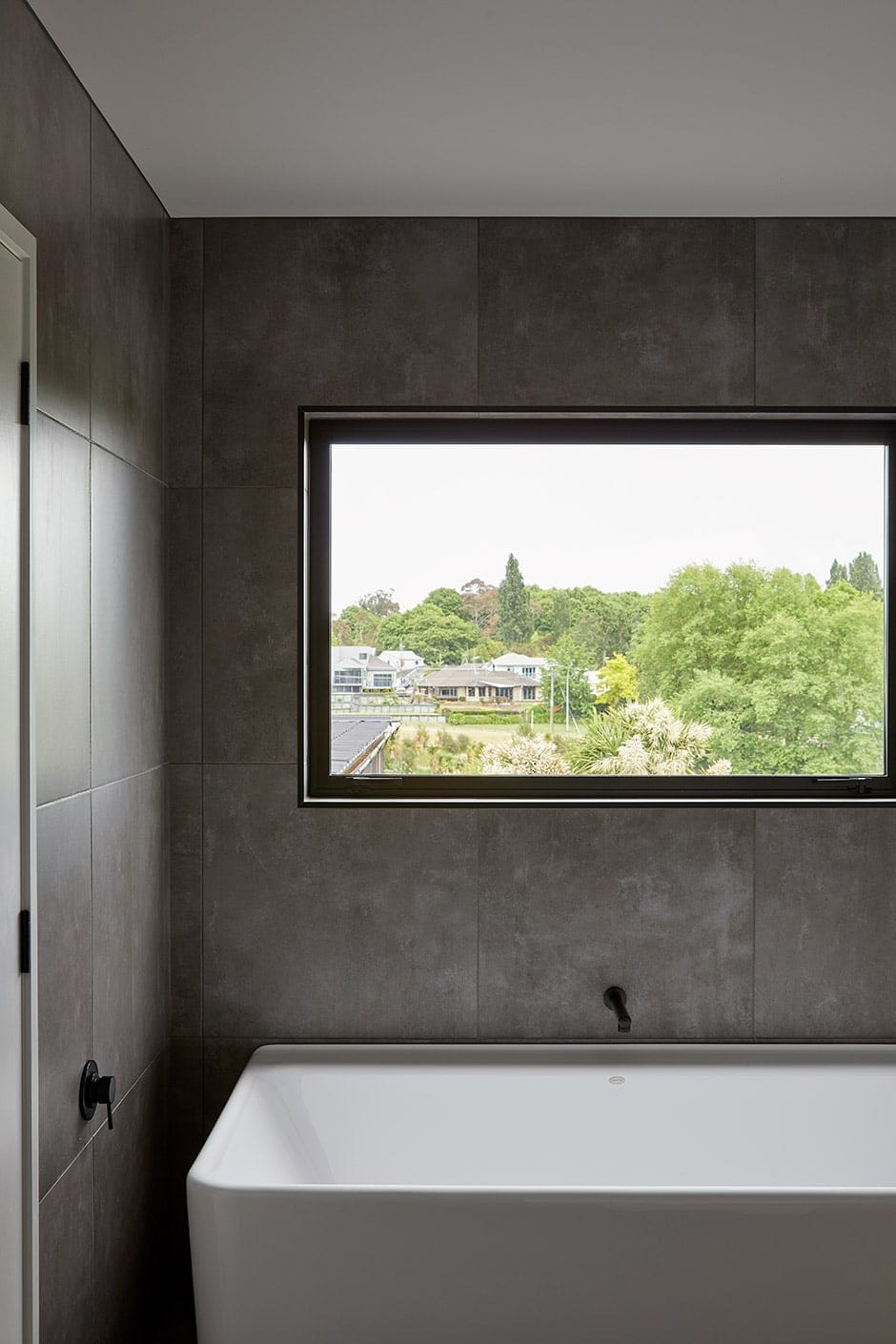 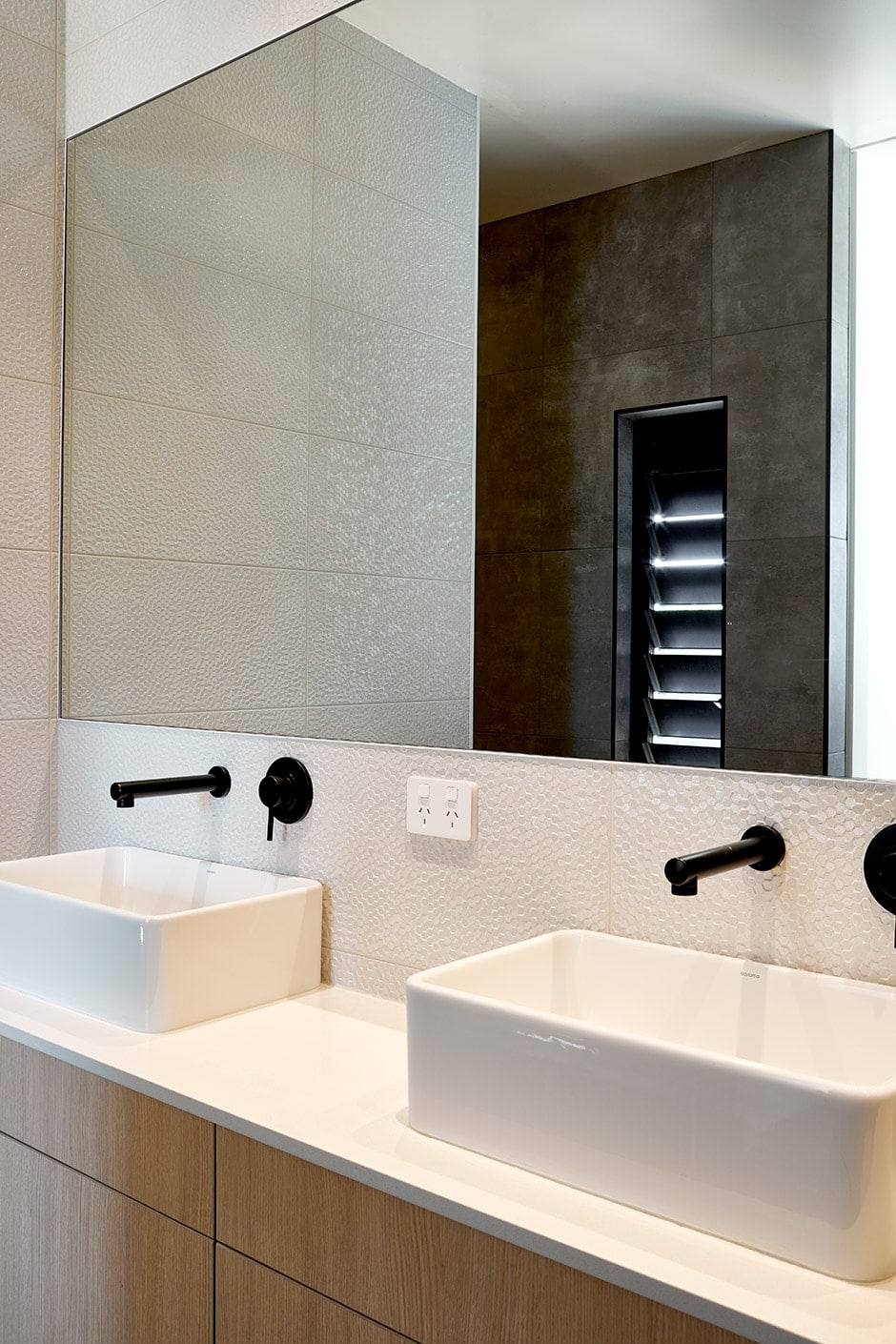 TOP The upstairs bathroom includes a freestanding bath set flush against the wall and offers a view right across to the opposite bank of the river. ABOVE Aluminium louvres are a striking option in the ensuite.

“We didn’t want mechanical air conditioning, so the big windows mean we can open everything up — and when the front door’s open too we get some nice cross-ventilation coming through,” says Robert. 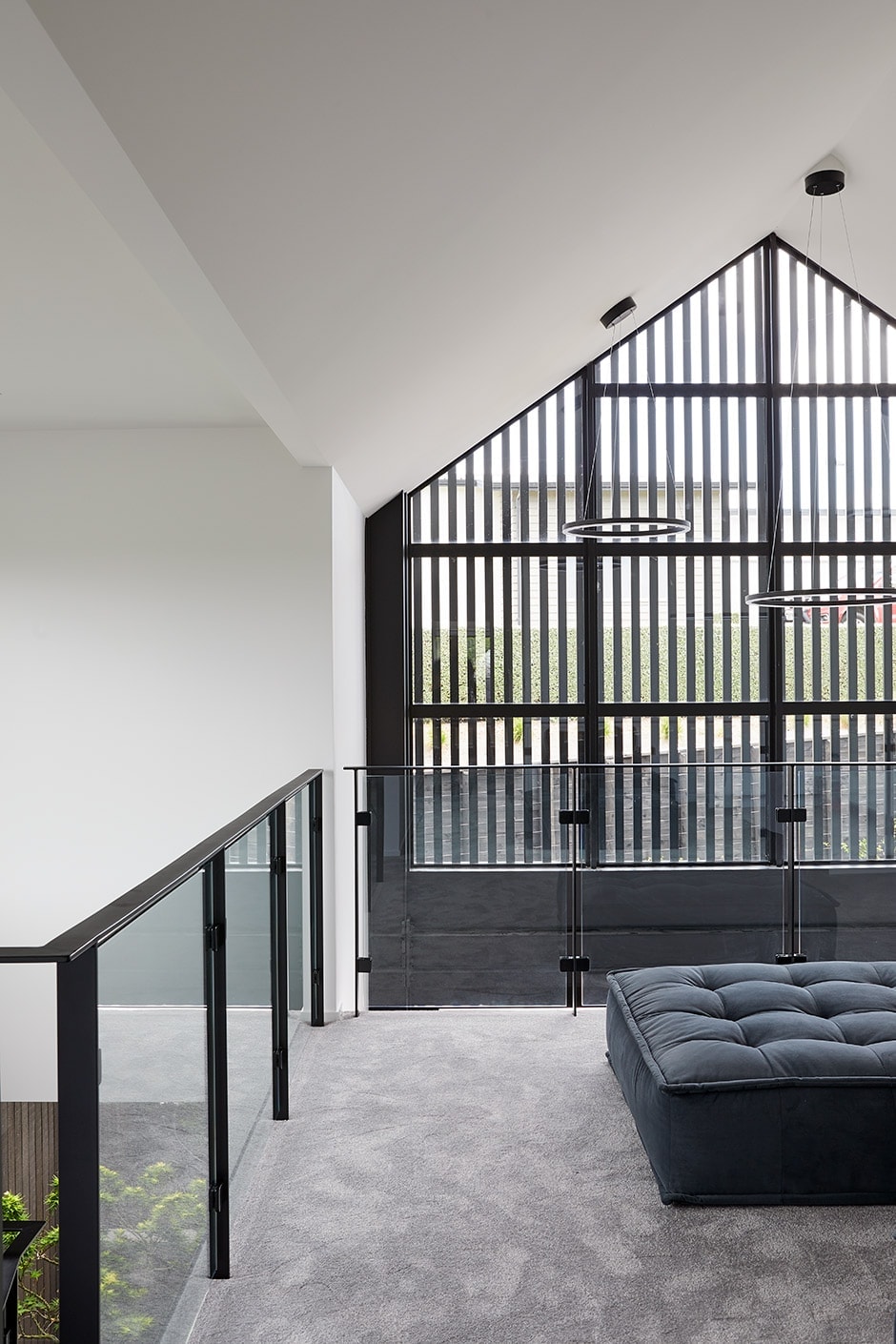 ABOVE On the first-floor landing is a mezzanine space that’s become an extra hang-out zone for the kids.

Radiant heaters create a more natural warmth in winter. “It’s amazing how warm the house is, especially with this much glass,” says Robert. “The insulation of the windows is amazing.”
With the inclusion of a pool, Zandra and Robert have created an environment that celebrates the joys of staying in, which they consider the perfect partner to their busy lives.
“All our free time is spent having fun with the kids, so we wanted a really low-maintenance house,” says Robert. 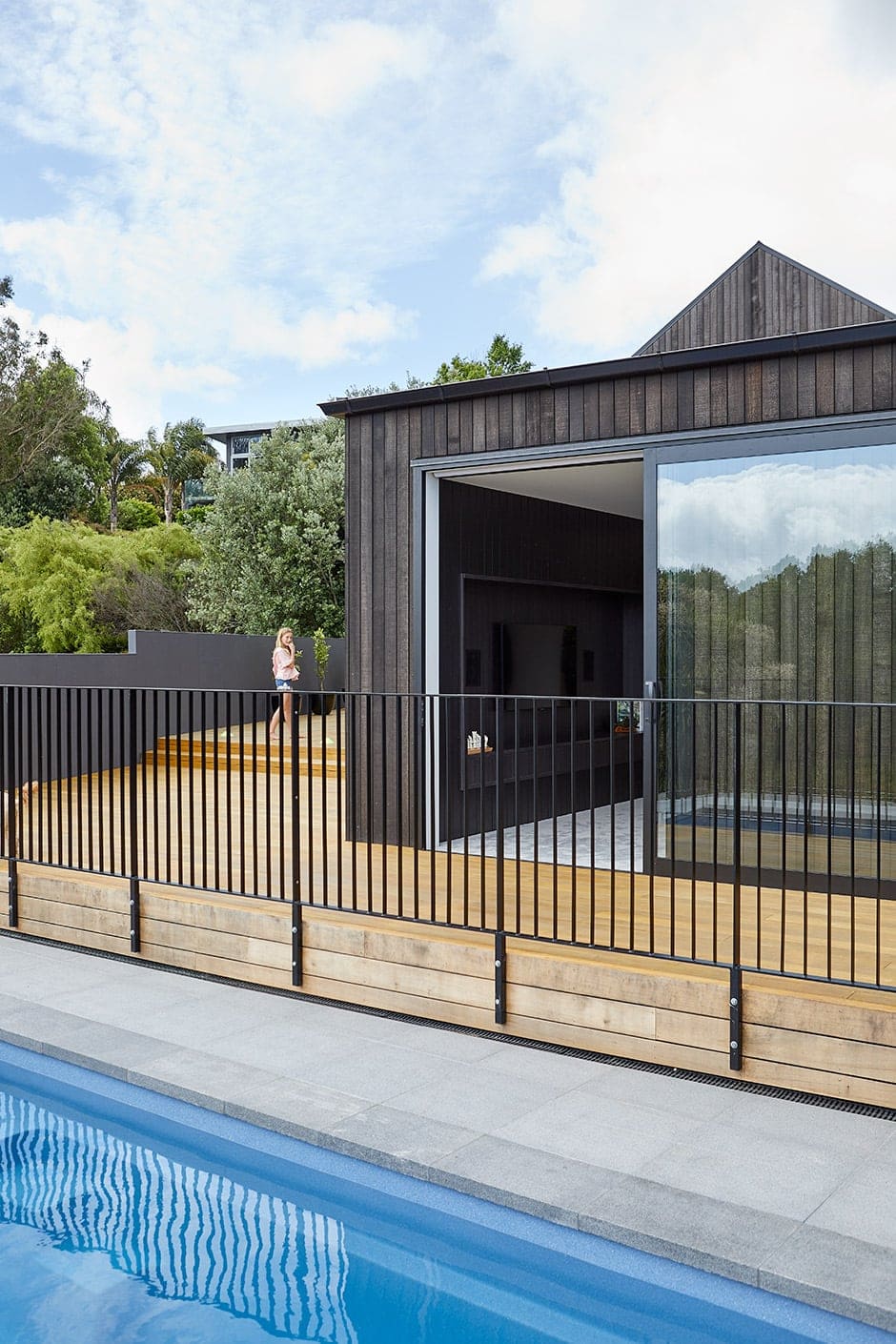 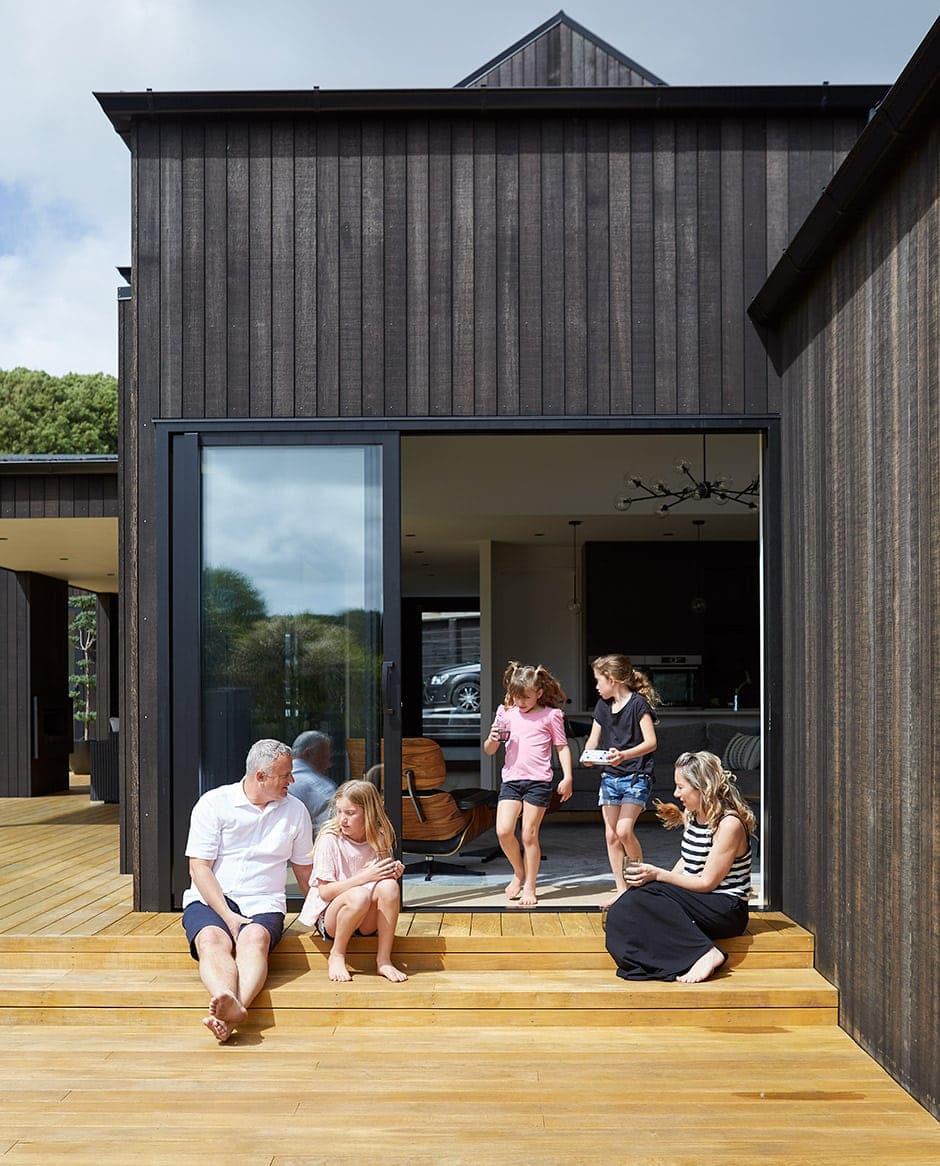 TOP An over-the-wall sliding door from First Windows & Doors’ APL Architectural Series provides easy access from the living area to the pool. ABOVE Generous decking leads to an outdoor entertaining area, where the inclusion of a fire (not to mention a fully wired sound system) see it enjoyed day and night, year-round.

“Our intention was to create a sacred space,” says Zandra. “You come down into our home and it’s like you’re in a cocoon. We’ve got the river flowing by and beautiful nature all around us. We’ve captured our vision of living out in the open, but being right in town suits our lifestyle too.”
firstwindows.co.nz

Next36 hours in Tokyo