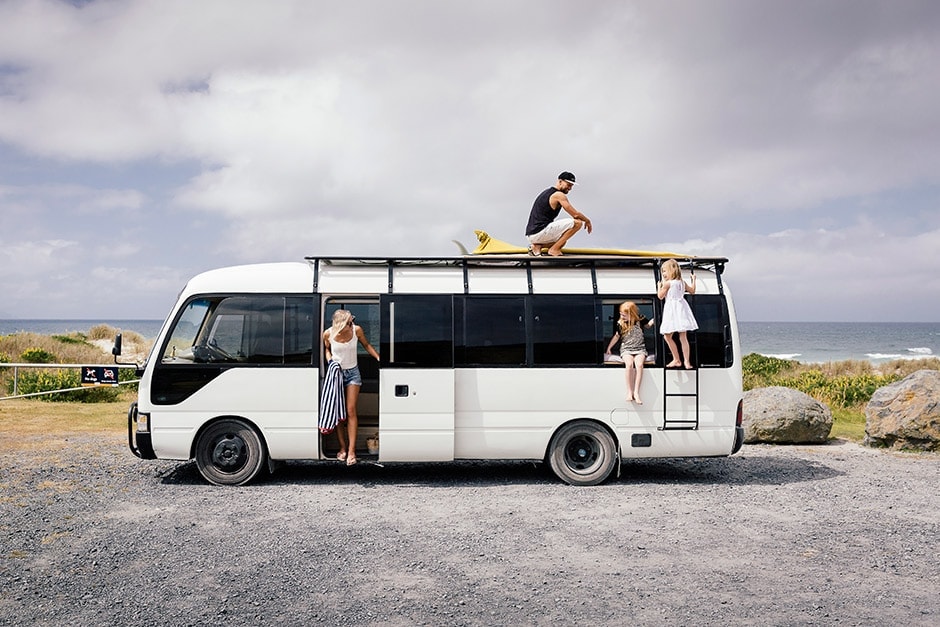 This young family follows the waves around New Zealand, living small-space in their tastefully refurbished bus.

If, on your next beachside break, you happen upon a young girl set up at a table outside a big white bus who offers to braid your hair, it’s probably Summer Sterne. The seven-year-old likes to channel her entrepreneurial spirit while her parents, Renée and Matt, catch the waves.
Summer and her sister Haven (5) are privileged enough to be able to follow the surf with their mum and dad in their holiday home on wheels. Auckland-based graphic designer Renée and architect Matt had a vision for a vehicle that would partner with their pursuit of the perfect peeler, but they didn’t want a hippy haven or retro roller — pared-back simplicity was on their radar. They also had a budget: $20,000 for a vehicle and $20,000 for renovations. 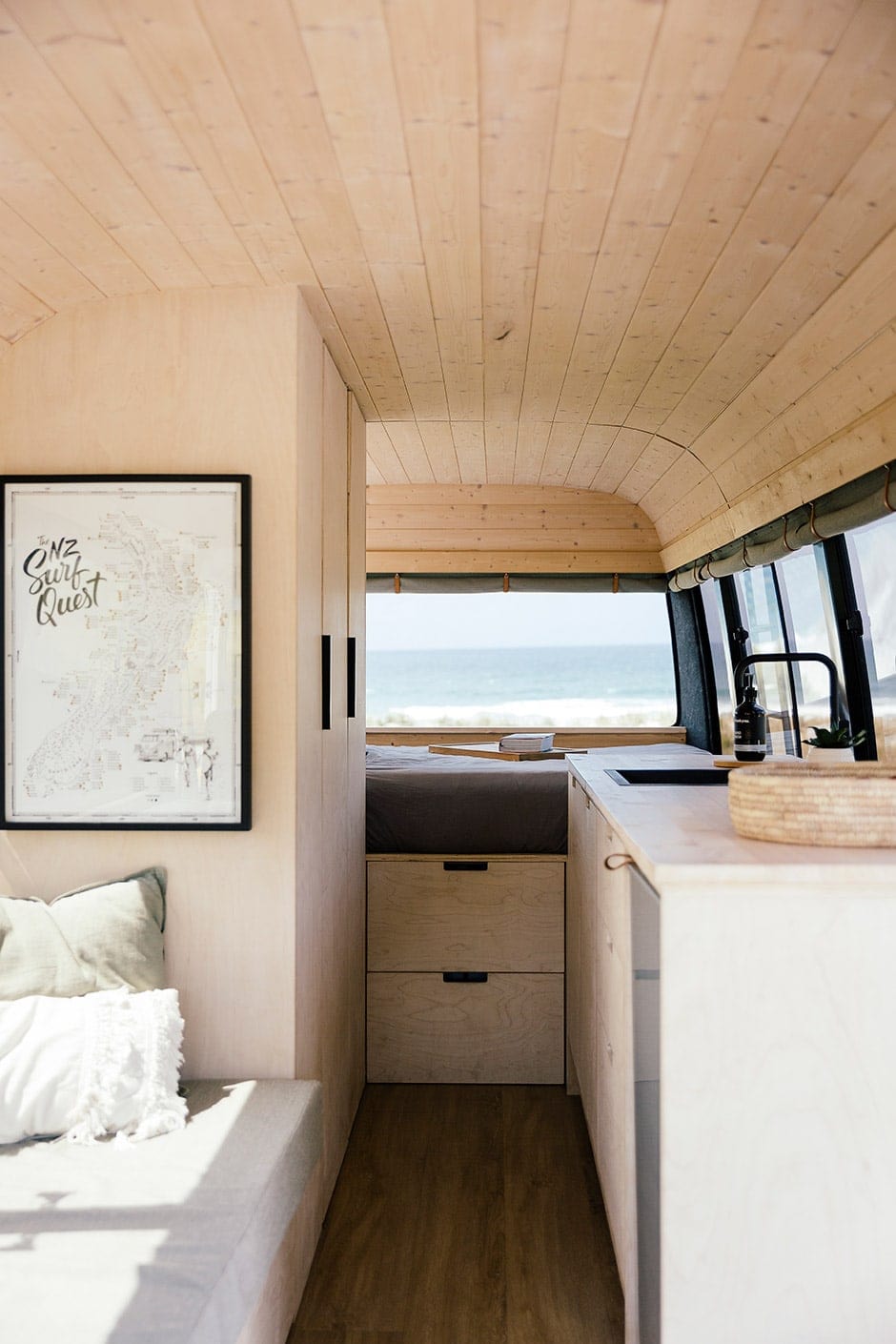 The 1997 Toyota Coaster they settled on had enjoyed a colourful life, first as a party bus (hence its four large speakers and purple-tinted windows) and then as a 22-seat tourist transporter that delivered hikers to the Tongariro Crossing. “It had vinyl throughout the cabin, ripped velour seats and pumice dust in every crevice,” recalls Renée. Transforming it into a Scandi-style sleeper was a major mission. 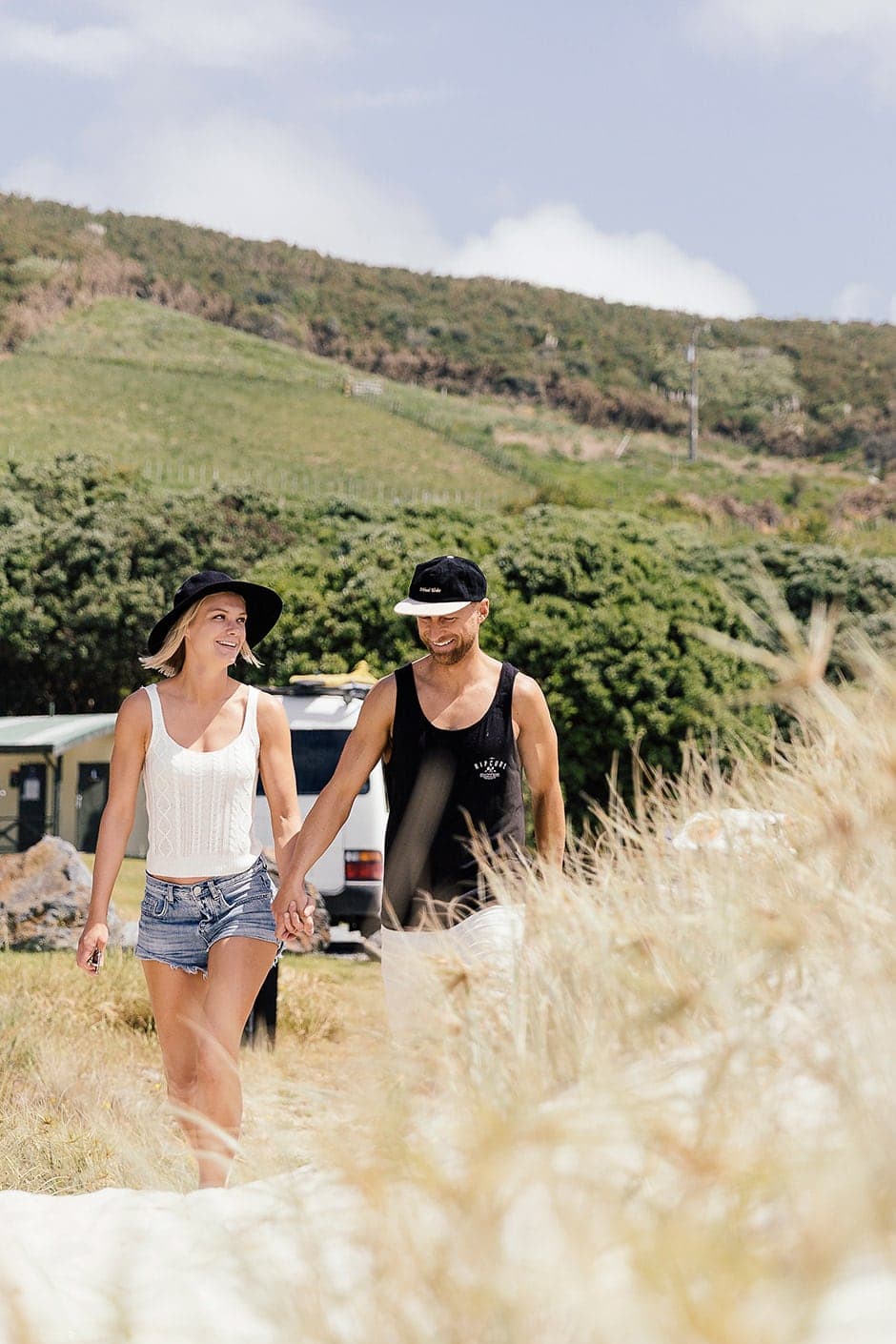 After hours and during the weekends, the pair got stuck in. The physical work, stripping it back to the bare shell and cleaning every crevice, was the easy part. Alongside it were the mental gymnastics of achieving the aesthetic they wanted while meeting legal requirements. “Engineers had to certify every steel bracket, bolt and washer,” says Matt.
The main sticking point was how to seat the kids while on the road without compromising space for the couches/beds. “We wanted seats that could be stowed away when we were parked,” says Renée. 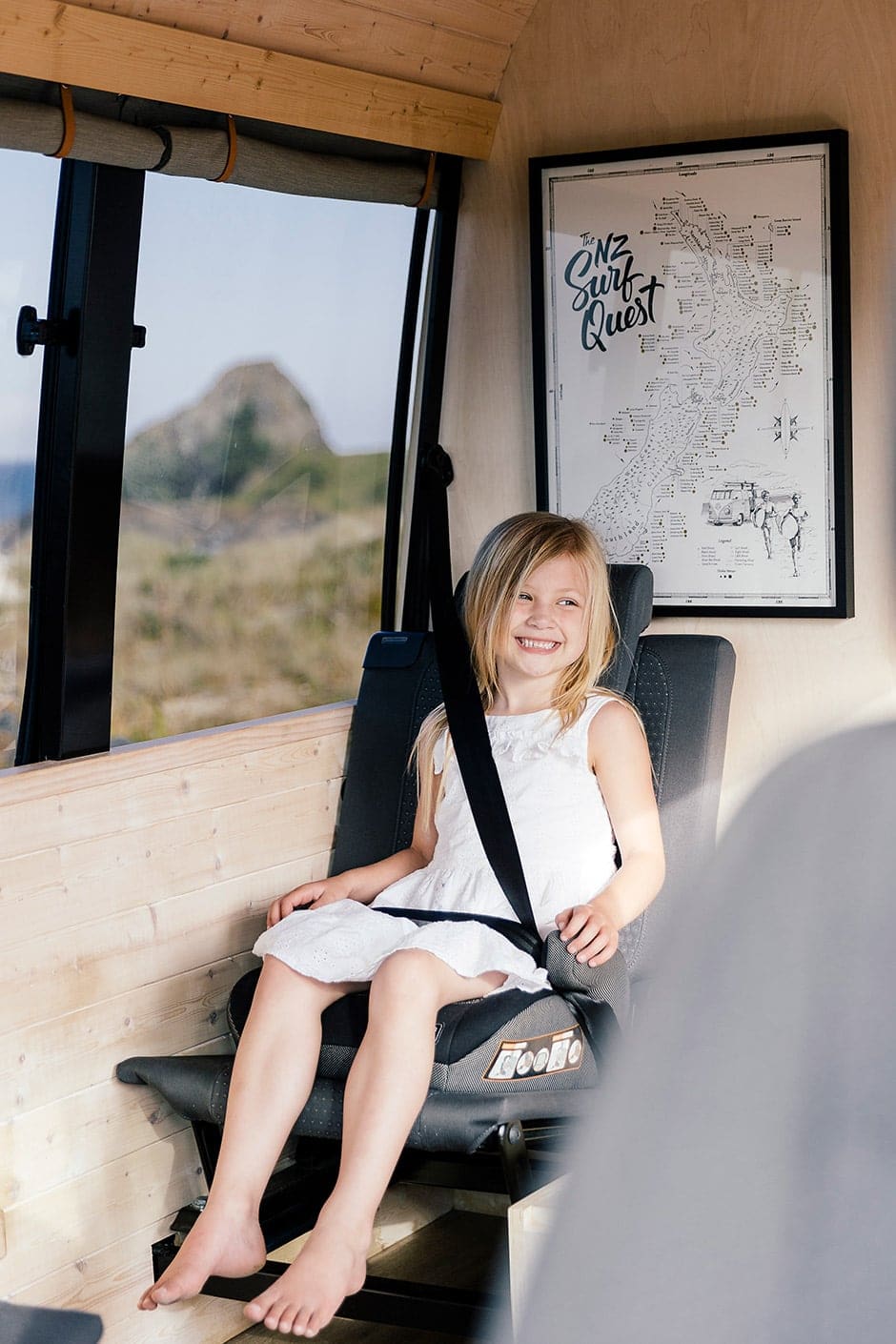 ABOVE The timber inside the bus is finished with Woca Worktop Oil in White, part of the scheme that reflects the white sand and muted tones of the East Coast beaches the couple love. Renée made the blinds out of canvas; leather straps allow them to be rolled up and magnets clamp them to the window frames when they’re down.

One afternoon, the couple “played a babysitting card” and headed off on a date to the pick-a-part scrapyard. In the last car they looked at, they struck gold: seats that would fold flat and meet code — with some coaxing. “Luckily, Matt’s good at welding,” says Renée. 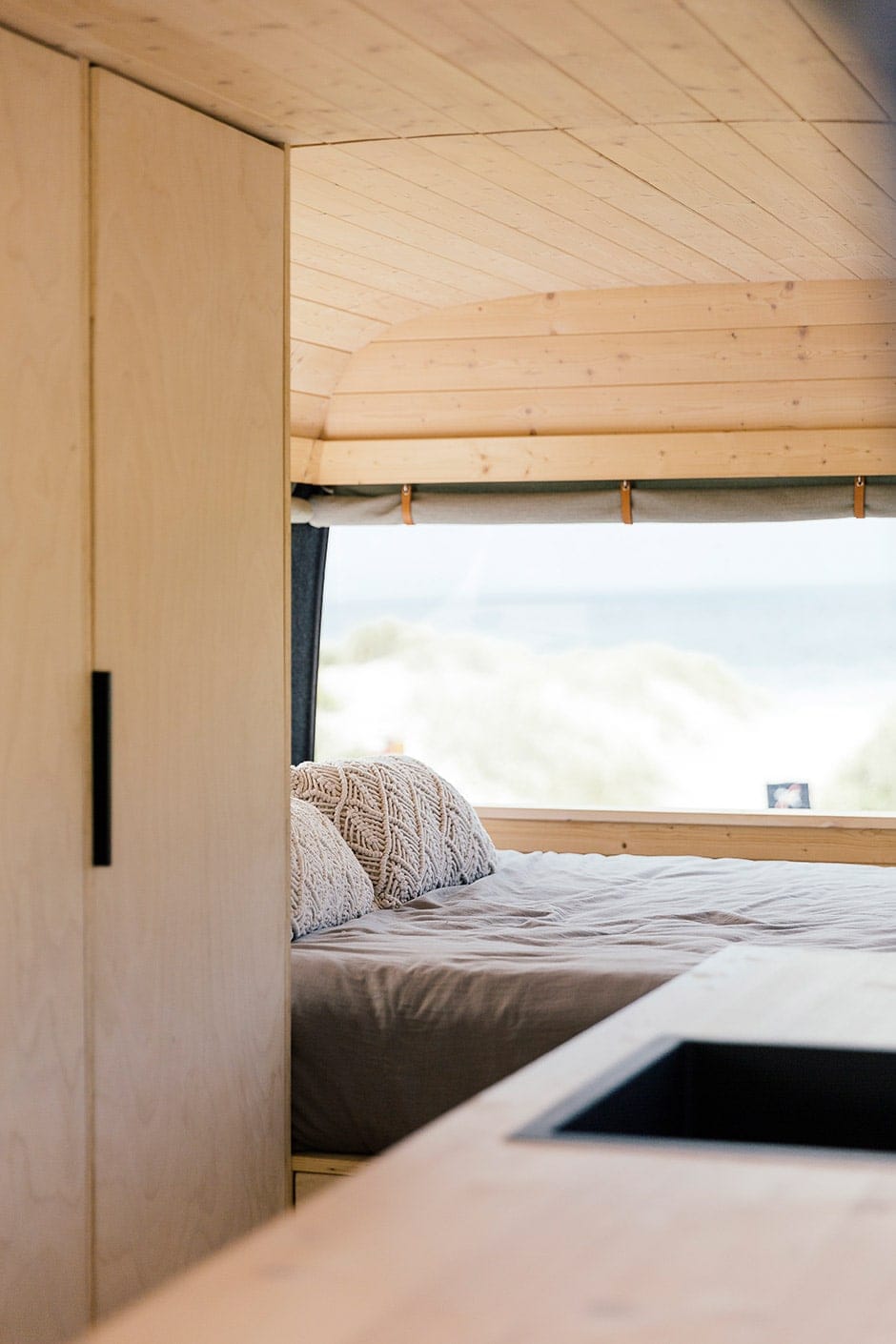 ABOVE The couple chose black trim for the pale cabinetry and a folded-flat handle from Bunnings for the pantry. Their bed enjoys a view through the rear window.

He certainly got enough practise. Here’s a wee list: curved window mullions, frameworks for the fresh and greywater tanks, a ladder and roof rack, door trims, bull bars ­— all custom-designed and self-fabricated.
While Matt was making magic with metal, Renée was not idle. She painstakingly stripped that purple tint from the windows, reupholstered the cabin and, once expanding foam insulation was installed beneath the roof, had the job of shaving off any bulges so the new timber cladding would lie flat. 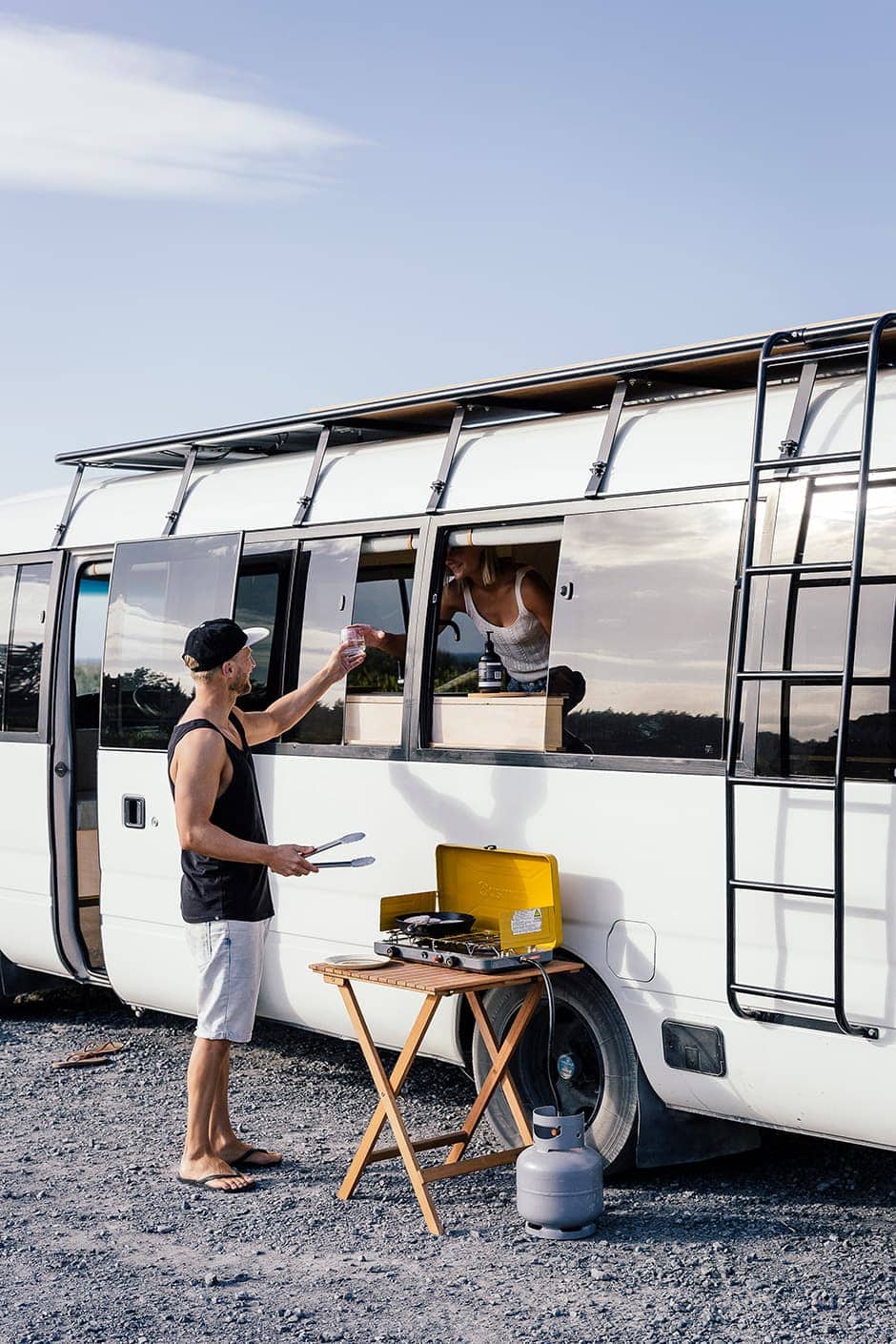 ABOVE A servery hatch provides a connection between the kitchen bench and the Gasmate outdoor cooker. Matt designed and fabricated the roof rack to house two 200-watt solar panels that feed power to the bus’s batteries. The roof deck is made from sustainable South American hardwood garapa, which offers stability when unloading the surfboards and watching the waves.

They couldn’t wait to line the ceiling with tongue-and-groove spruce timber, which was central to their concept of a minimal-chic interior. At first, they grappled with a jigsaw of battens, trying to find the right configuration for the cleanest look. “We didn’t want any visible screws,” says Matt. “Finally, we came up with the idea of a pelmet that would reduce the visual clutter and that we could install lighting behind.” 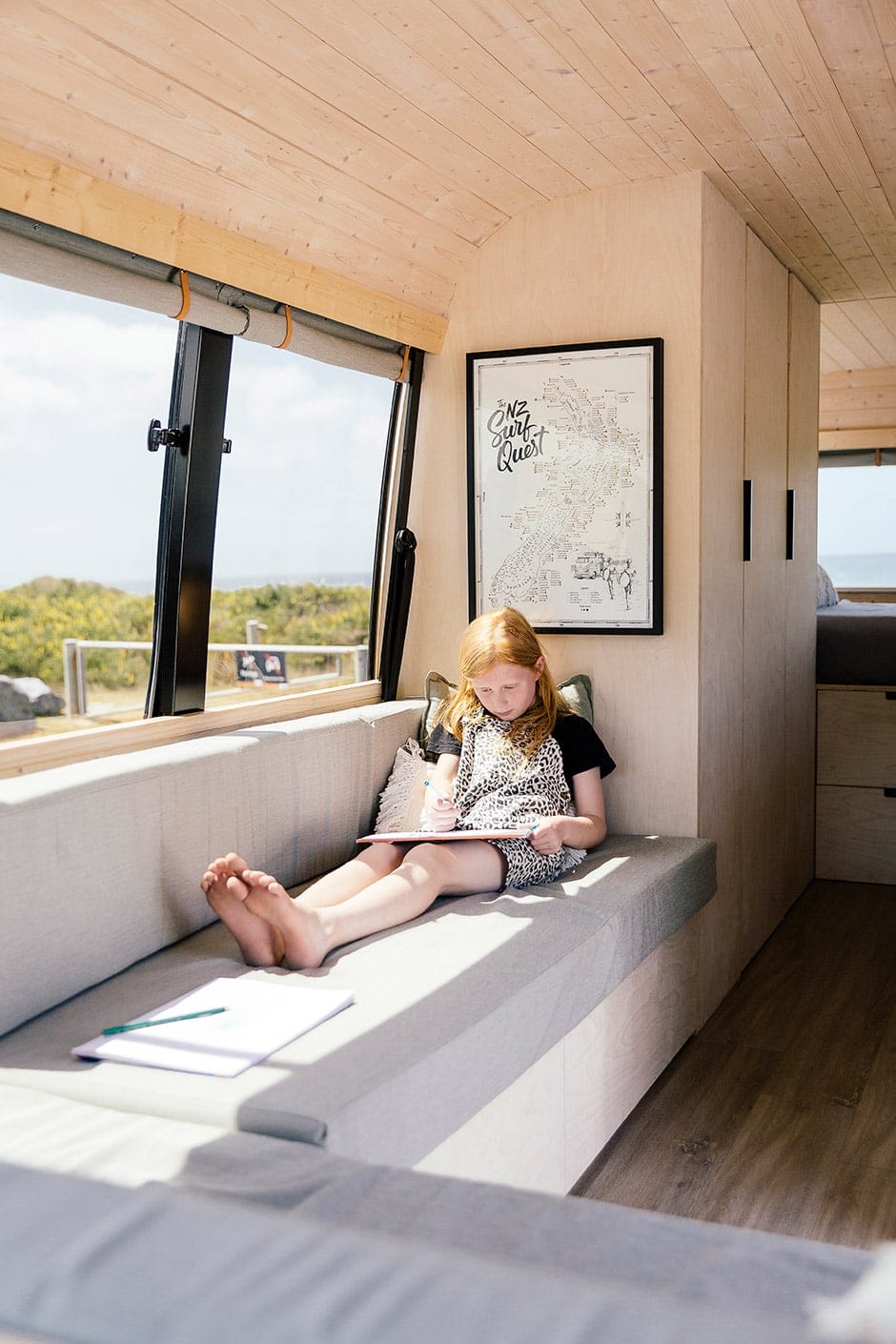 ABOVE The children sleep on bench-seat-style beds with squabs upholstered in the same canvas fabric as the blinds.

With the flooring (interlocking vinyl planks) done, it was time for the fun stuff: putting in the ‘furniture’. Of course, the Sternes broke with convention by opting not to have a stove (Matt prefers to cook outside) yet adding a full-sized sink.
“I didn’t want a campervan bowl,” says Renée. The black-coated stainless-steel Ikon sink (with a Caroma tap) is offset by a spruce benchtop and birch-ply cabinetry finished with Woca oil. The bus’s drawers and doors have routed handles that don’t protrude into the passageway and the windows have blinds, not curtains, which roll up for unimpeded visual access to the view. 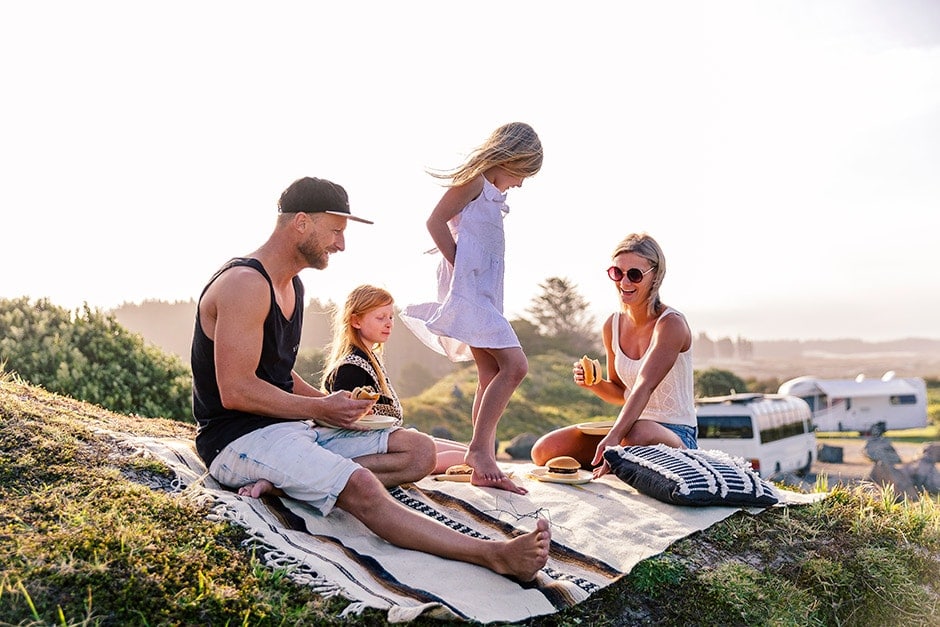 There’s a built-in double bed at the rear of the bus and the girls sleep on benches at right angles to each other near the front. Each family member has a single drawer for clothing. To keep the interior of the bus dry, they rely on outdoor showers, and their composting toilet is odour-free and easy to operate.
Multifunctional design allows the 2m x 7m bus to feel bigger than its bones, but what’s really expanded is the family’s experience. Halcyon snapshots fill their Instagram feed (@surfbusproject): bleached days of sun and sand, a foray down a forest road, surfboards on the roof deck, iceblocks on a grassy knoll. 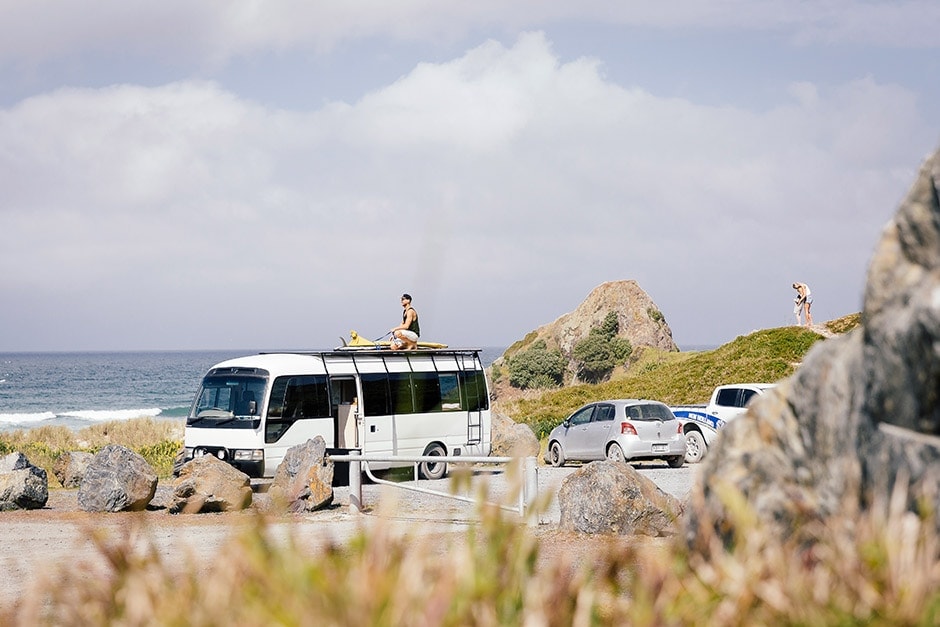 That the Surf Bus was completed to budget is a feat worth bleating about, but it’s so much more than an investment — it’s an asset in the true sense of the word. “The girls couldn’t wait to get away in it,” says Renée.
“We thought we’d use it one or two nights in a row but [on our last trip] that stretched out to 10. We weren’t ready to come home.”
Instead, they went where the waves and whim took them. And you can’t put a price on that. 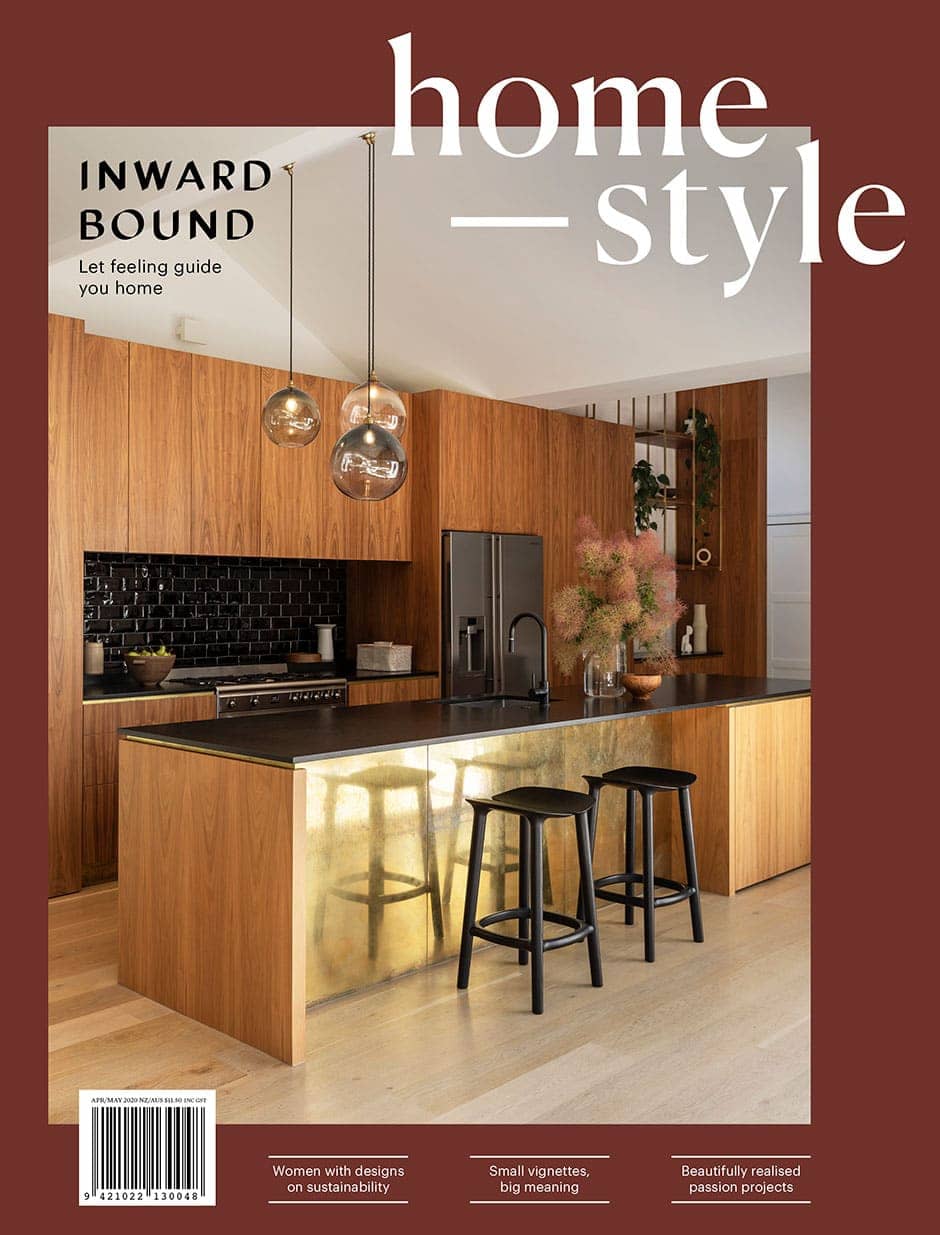 There's something cathartic about a rainhead showe