All eyes are on this Waimairi Beach house 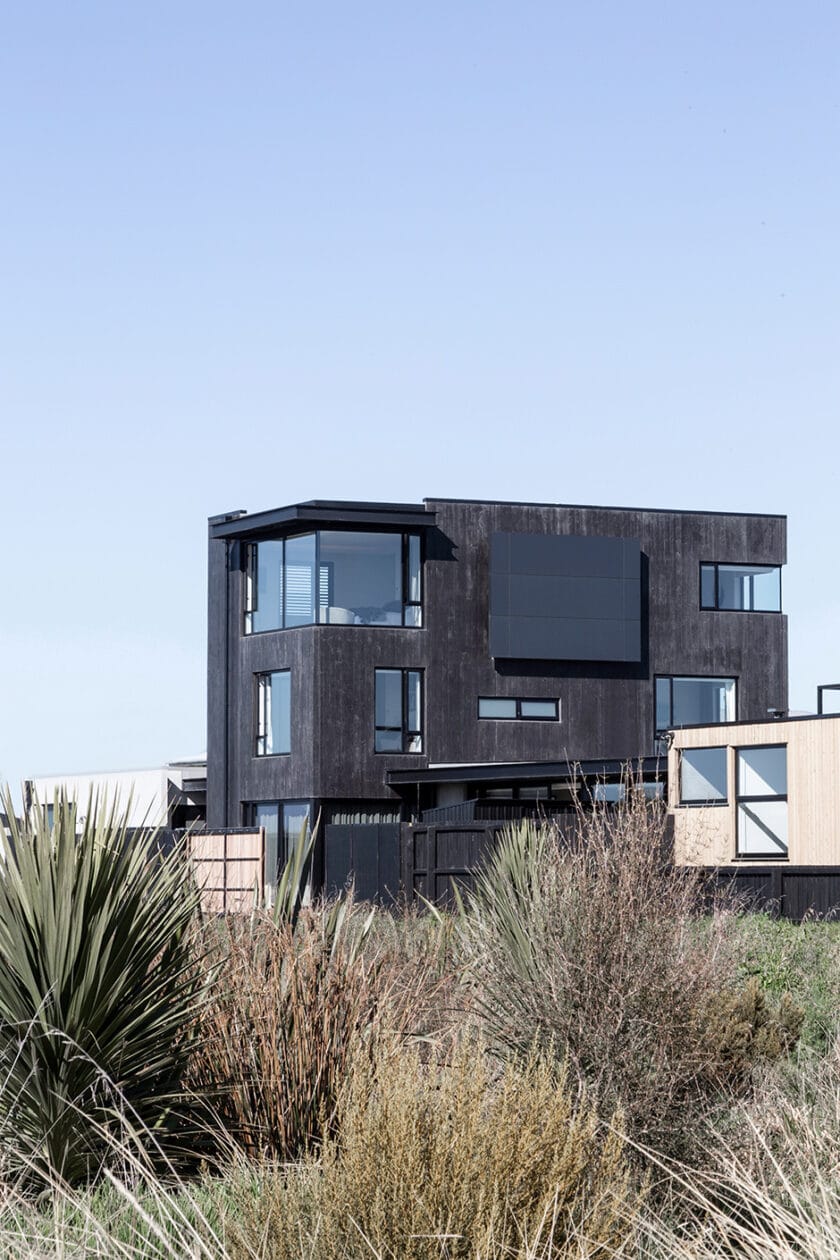 By Weir Architecture and Lume Design, the concrete home is innovative on the inside, too.

There’s a secret set of stairs in this seaside home that leads right up to the roof. In a three- storey house conceived by Weir Architecture’s Robert Weir as a tower reminiscent of a lifeguard station, the pull-down steps concealed in the upper-floor ceiling transport its surfie inhabitants to the very top, so they can see what’s up with the waves.
For their second build in Waimairi Beach, the Christchurch suburb they’ve called home for 22 years, Jo and Blaise Chamberlain, owners of this house and decorative concrete business Concrete Masters, have used their favourite material to create a family dwelling that’s much more sculpture than beach shack. 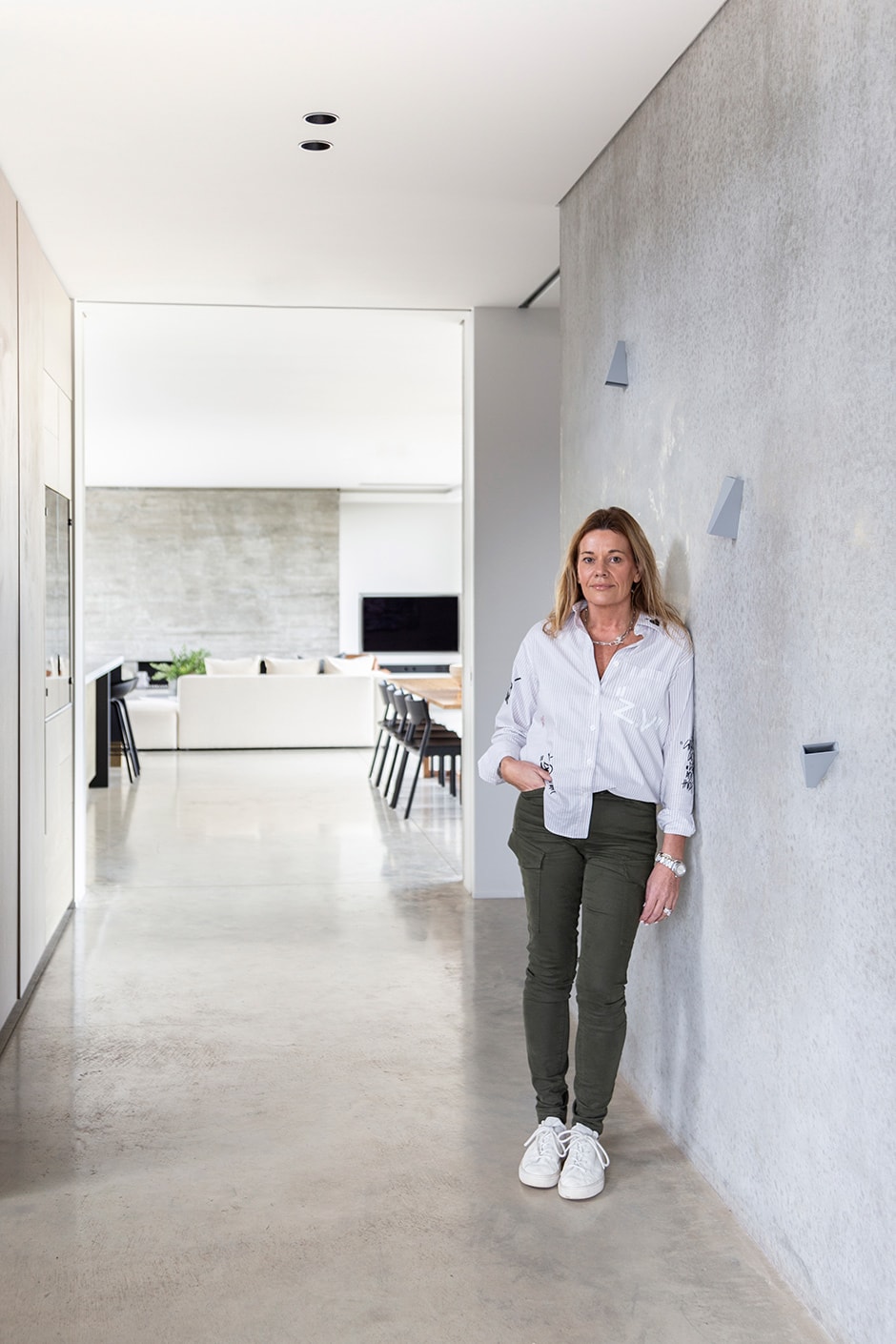 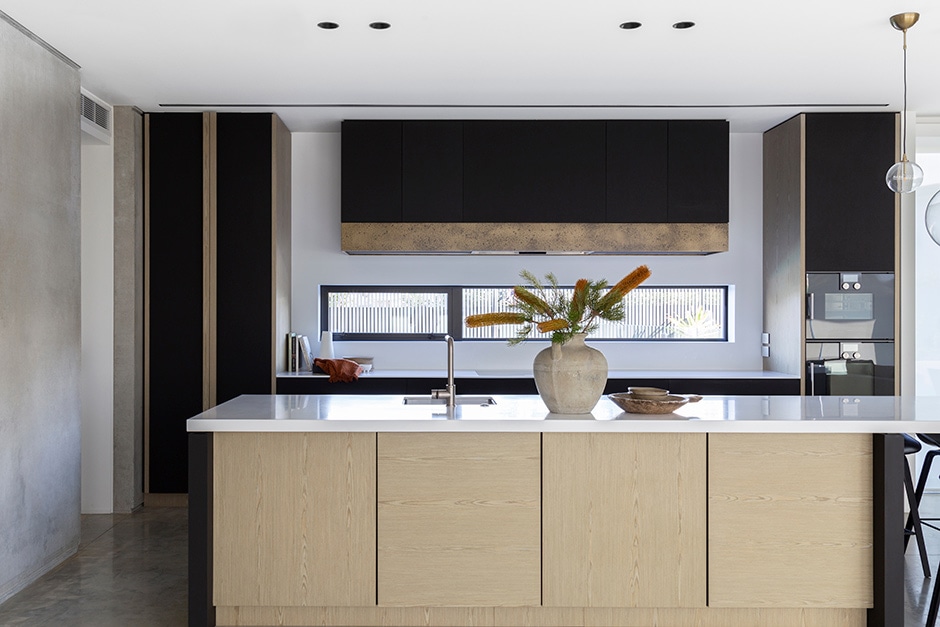 TOP Jo stands in the entryway beside a light/art installation Jeff made from a carefully randomised cluster of Topix directable wall lights from Delta Light. “It looks really dramatic in the evenings as light washes across the textured concrete in a play of light and shadow,” he says. ABOVE Oh for a kitchen with an ocean outlook through floor-to-ceiling sliders on one side, and a glimpse of your in-ground pool through the long, slim window on the other. “It’s a space we all love to be in,” says Jo. “Even in inclement weather, we never get sick of the view.” On the front of the island, Lume used Bestwood Crown Cut Recon timber veneer both vertically and horizontally.

Aside from its tower-like form (which not only offers a bird’s-eye outlook from the roof but also an incredible view from the Kaikōura Range to the Port Hills from the main bedroom), the key architectural features of this house built by Lanyon & Le Compte Construction are its use of concrete, steel and glass, the overall structure crafted from cocoon concrete panels and the tower in coloured concrete by Peter Fell. 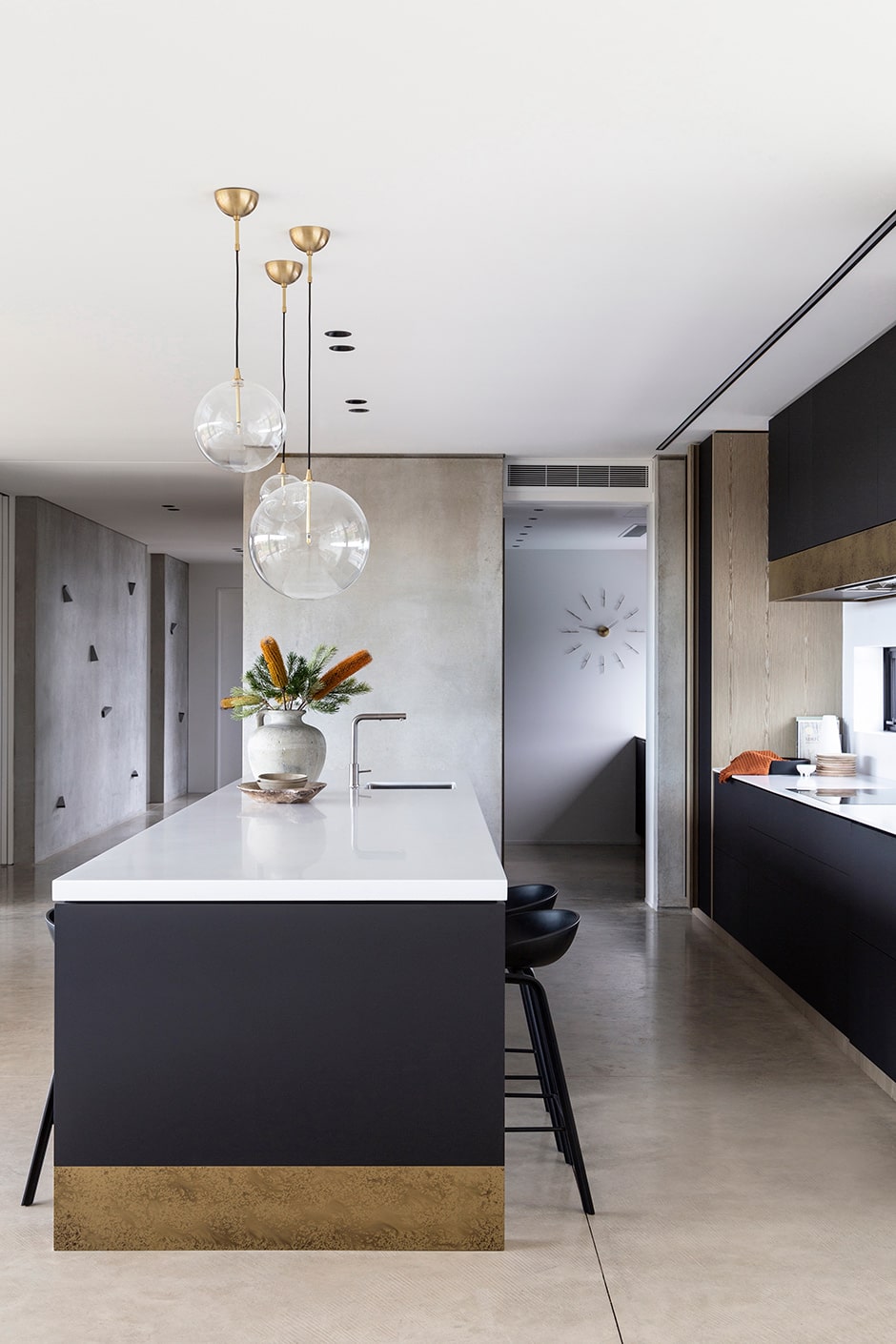 ABOVE “Prime Panels’ Soft-Matt laminate in Black Velvet allowed us to have a handleless kitchen and make the most of the anti-fingerprint tech,” says Jeff. “We chose Corian Designer White for the benchtops for its ability to seamlessly wrap the back wall and into the window reveal.” Aged brass accents by Remarkable Surfaces on the island, rangehood and scullery shelves (complemented by Glass Globe pendants by Schwung Home over the island) provide visual interest that’s not too flashy.

“The beachside location gave us the perfect opportunity to use concrete everywhere,” says Jo. “Solid, minimalist and low-maintenance, with superior thermal qualities, it’s a product we love to work with. Robert was excited about using it, and his resulting tower idea was so cool and different from anything we’d seen before that we decided we simply had to make the bedrooms and bathrooms all fit within it somehow.” Meanwhile, the living areas are contained within their own footprint on the ground floor, cavity sliders allowing these spaces to be opened or closed off, providing opportunities to congregate and seek solitude. 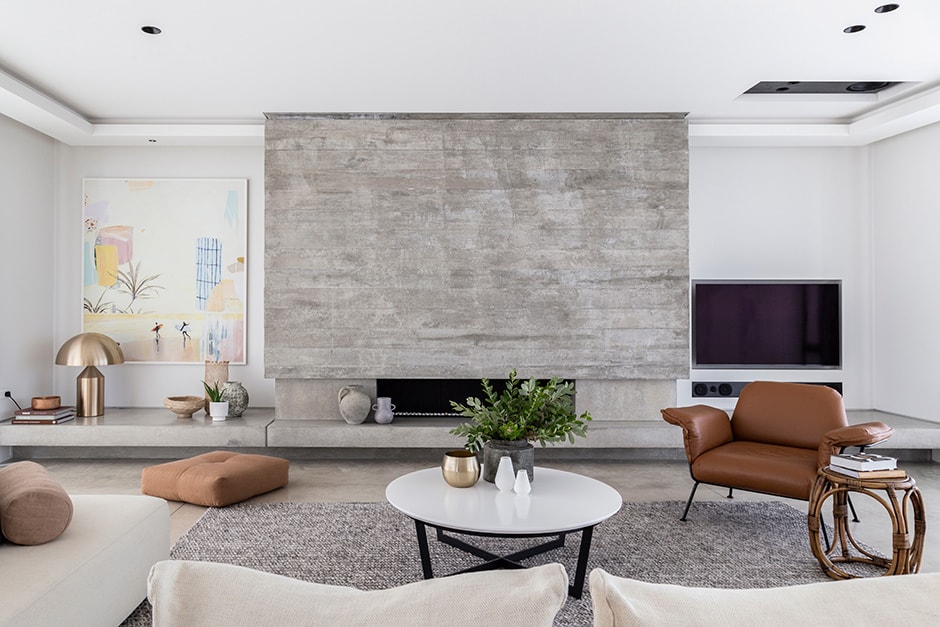 ABOVE Resene Wan White has been used on the walls throughout the home, while the downlights are by Switch Lighting. Alleviating the hard concrete in the living area are a modular Matteo sofa by David Shaw in jacquard Kumi Calico fabric from Warwick, linen floor cushion by Montreux Furniture in Satori Stonewash Nude fabric by Mokum, wool- blend Massachusetts rug in Natural Grey by Source Mondial, leather Walker chair by Tim Webber and rattan side table from Corcovado. Designed by Robert and reconfigured by Jo and Lume, the 4m ‘floating’ fireplace was created by the builders off site and craned in before being fitted with a custom-made gas fireplace by Auckland’s Living Flame.

Thanks to its hero material, this abode was built more quickly than the average one. “It was incredibly exciting to watch it go up,” says Jo. “Having two 120-tonne cranes on site to take the concrete panels off the truck and put them in place was a sight that drew all the neighbours. Usually, the first floor of a home is built and everyone has time to adjust to that before you see the second storey, but we arrived with an 8.5m-tall tower in one go!” 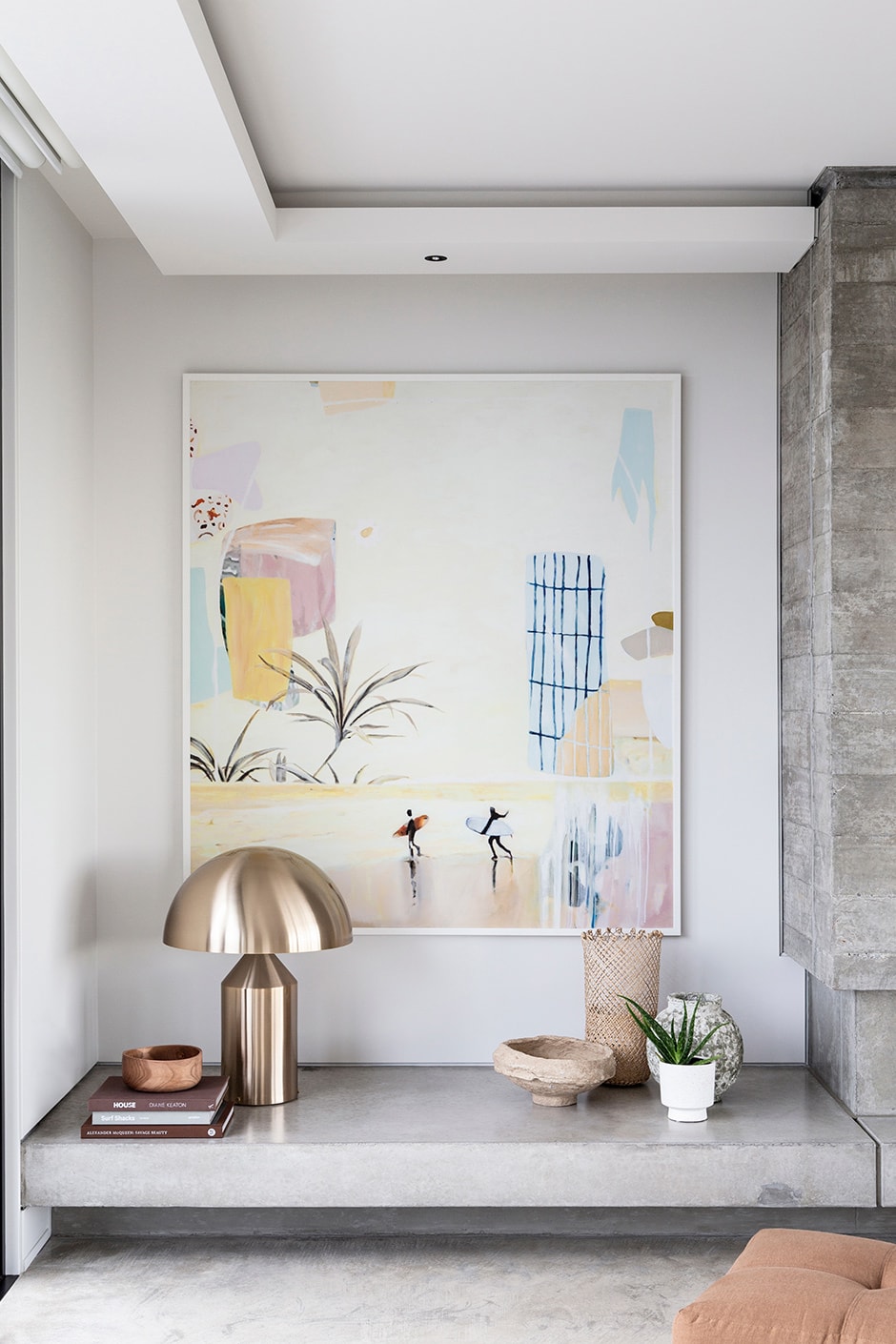 ABOVE The couple spotted this Free Spirit artwork by Georgie Wilson while on holiday in Queensland and couldn’t resist buying it. They tracked down the artist, then had it rolled into a tube and air-freighted home. “We know how hard it is to find stuff you really like, so we grab it when we can,” says Jo of her décor philosophy. The curvaceous Atollo lamp below it is by Oluce from ECC.

To ensure the inside of the home matched their vision as completely, the couple engaged the services of interior experts Melissa and Jeff Merrin of Lume Design. “I know what I like, I just don’t know how to put it all together — and they did that and then some,” says Jo. “The beauty of using Lume is they design the entire interior, and having the whole project in mind saves expensive mistakes. Throughout the build, they were on site working alongside our builder and sub-trades to ensure everyone understood their plans. Melissa also got us out of our comfort zone with a few decisions along the way — such as the timber-look tiles in the ensuite — and she was right. It’s not about taking risks outside the things you like, but sometimes you’ve got to make a couple of brave decisions — and then they end up being the things everyone likes the most.” 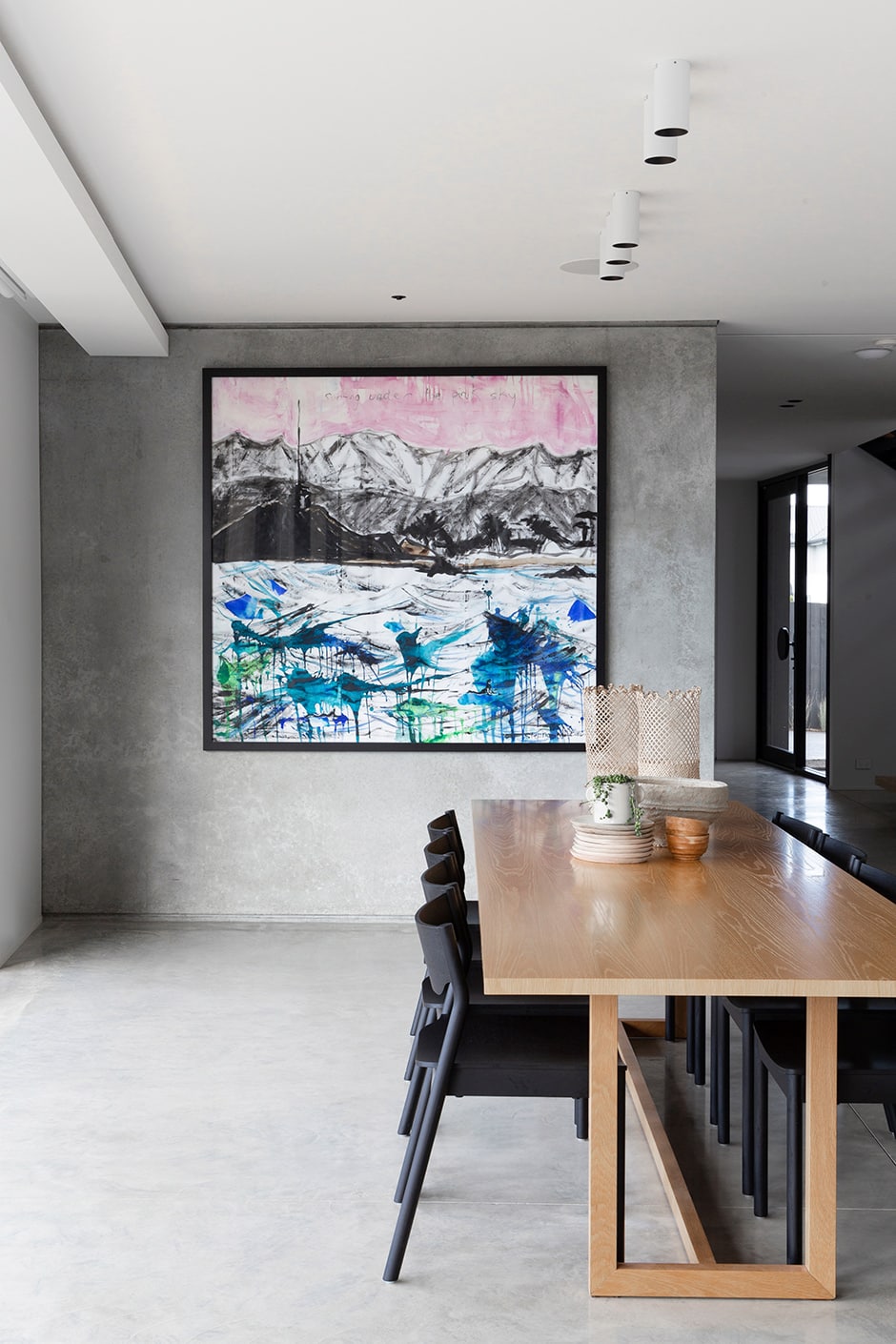 ABOVE This large-scale painting, Surfing Under the Pink Sky, is by local artist Stephanie McEwan. The family’s Heath dining table by Workshed from Belle Interiors, with Tangerine chairs by Resident, is lit by the same surface-mounted Ultra S Deep lights by Delta Light that illuminate the bathroom vanities.

“Our brief was to ‘soften’ the hard edges of the concrete by introducing colour and texture in the form of soft furnishings, furniture and joinery finishes,” says Melissa, who with Jeff devised a calming colour palette that takes tips from the surrounding sand dunes. “Jo’s love of interior design meant we could be a bit more daring with some of our choices — for example, the different timber grains and hues, the pops of brass, and the use of primarily black light fittings against the white walls and ceilings, which was a way to draw attention to an often disguised component in interiors; we wanted to acknowledge their presence as part of the overall detailing.” 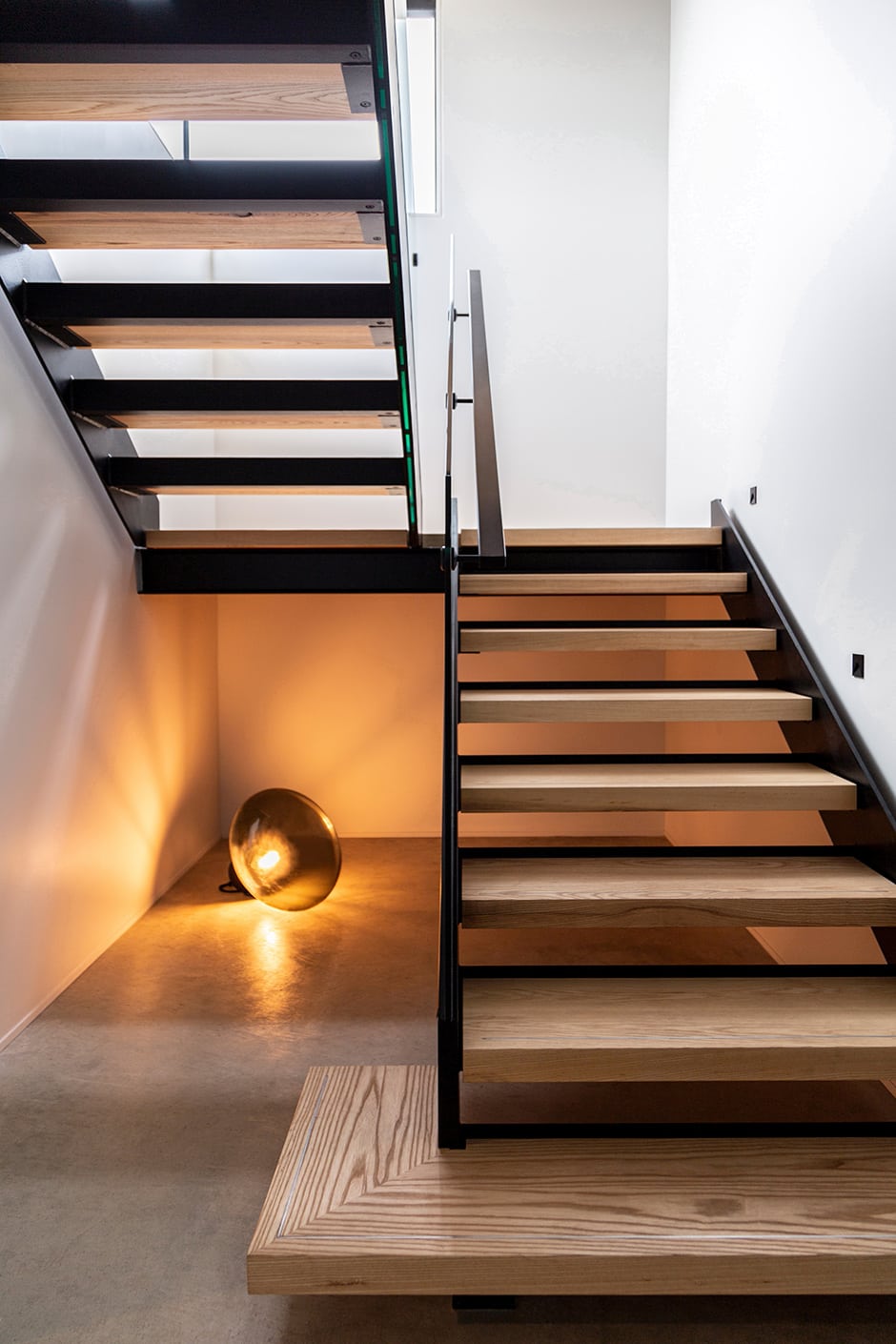 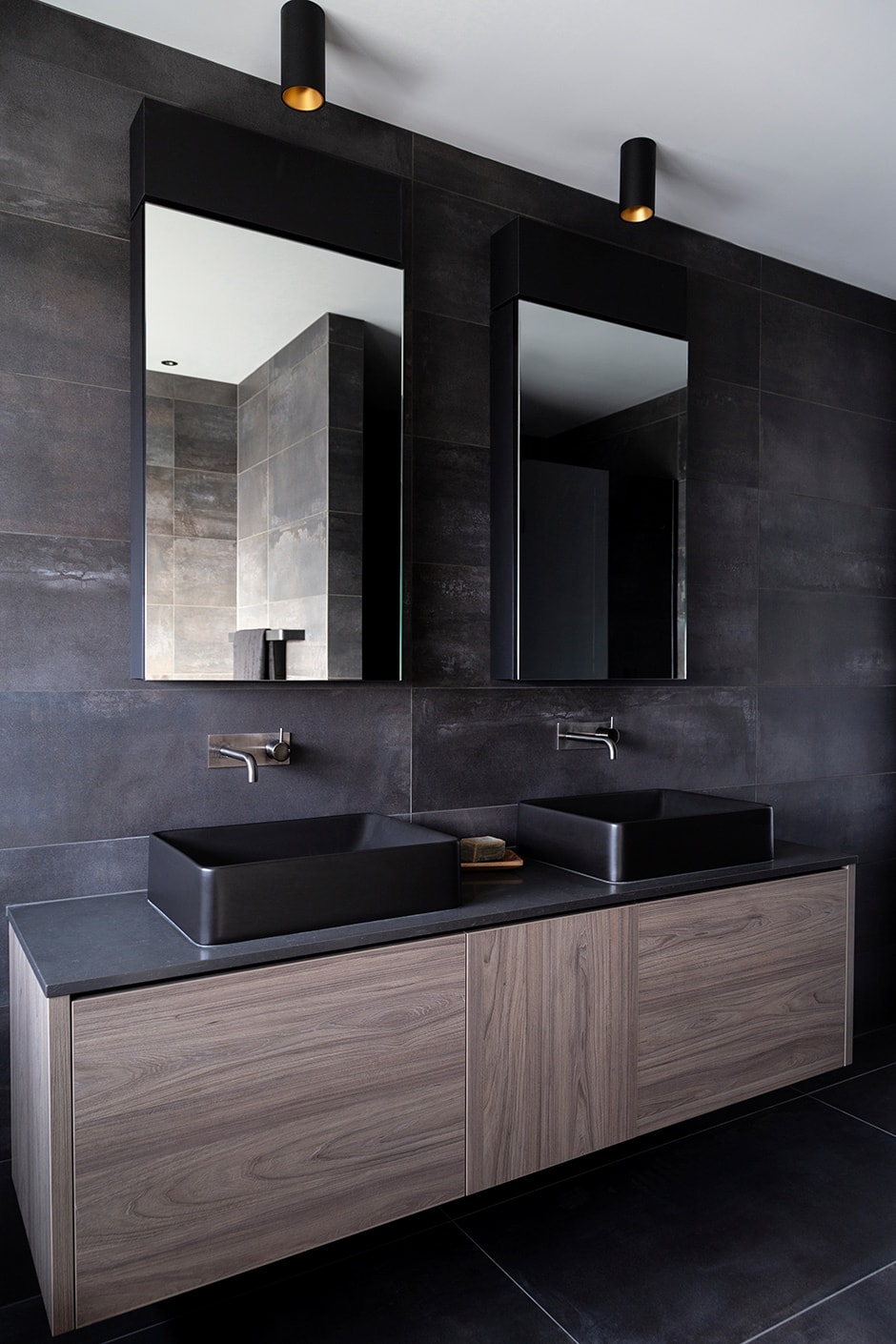 TOP Muffins lamp by Brokus in Smoke Grey glows at the bottom of the Canadian oak and steel stairs. ABOVE As is the ensuite pictured below, Taylor and Tiago’s bathroom is filled with elements custom-designed by Lume, including the steel-framed mirrors made by Lyall Park Joinery. “We wanted to create individualised spaces within this bathroom for each of the boys, so we included separate mirror cabinets, and dual Tondo basins by Progetto from Plumbline,” says Jeff. “We opted for a more masculine palette here than we did in the ensuite, but used consistent fittings and fixtures across both bathrooms, in particular the Buddy range of tapware, also by Progetto.”

These thoughtful extras are drops in the ocean of a home totally tailored to the couple and their teens Taylor and Tiago’s lifestyle, allowing them to fully embrace the relaxed beach vibe. “The kids and their mates are walking through with sandy feet, we’re outside with the doors open and the sun streaming in, and we’ve also just got a new puppy, so all I’ll say is, thank god I’ve got a concrete floor!” says Jo. “This house isn’t precious at all, and that’s how we like to live. We didn’t build to impress anybody or include something because everyone else has it; this is the house of our dreams, and I think that’s the biggest success. We built this house for us — and that’s why we love it so much.” 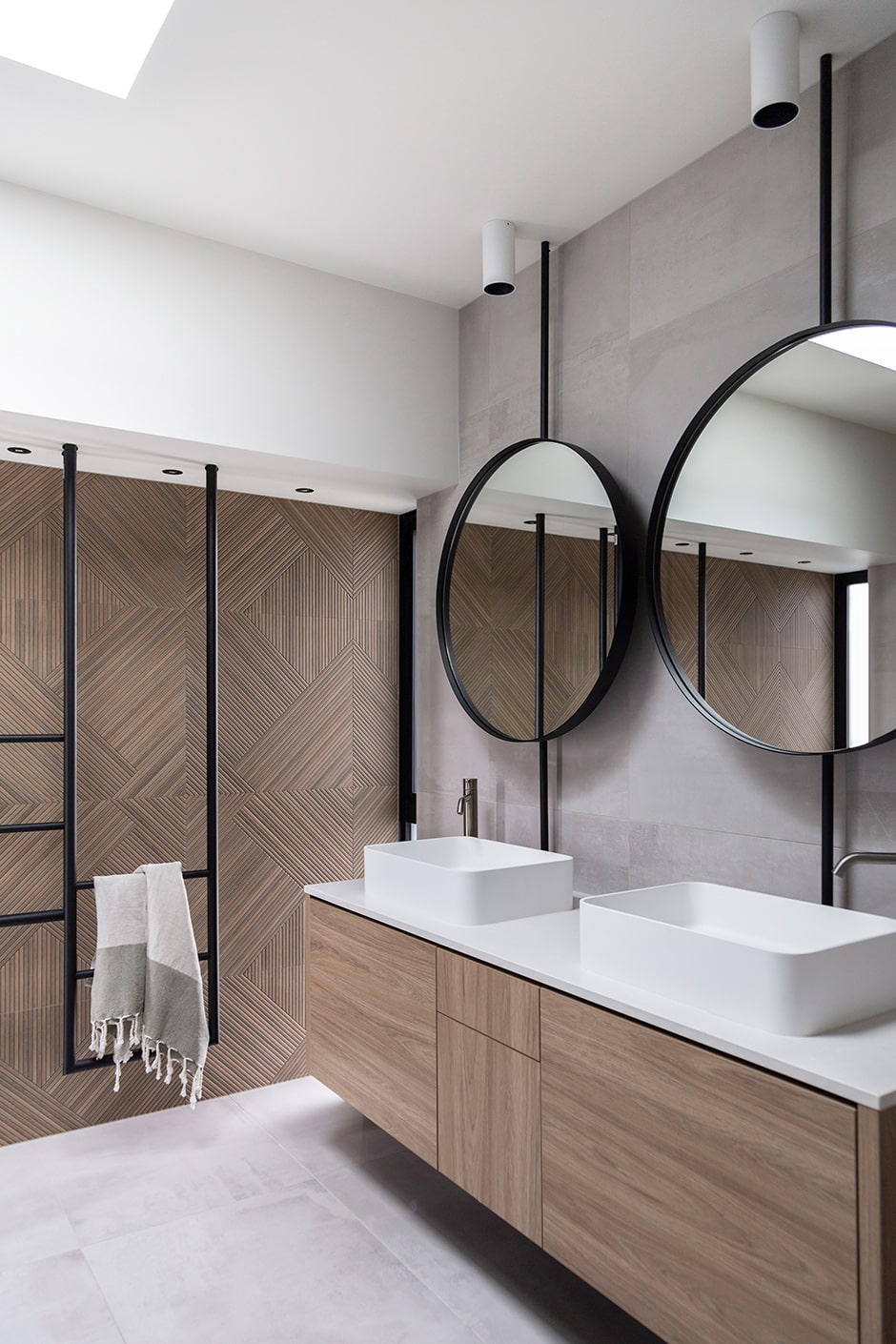 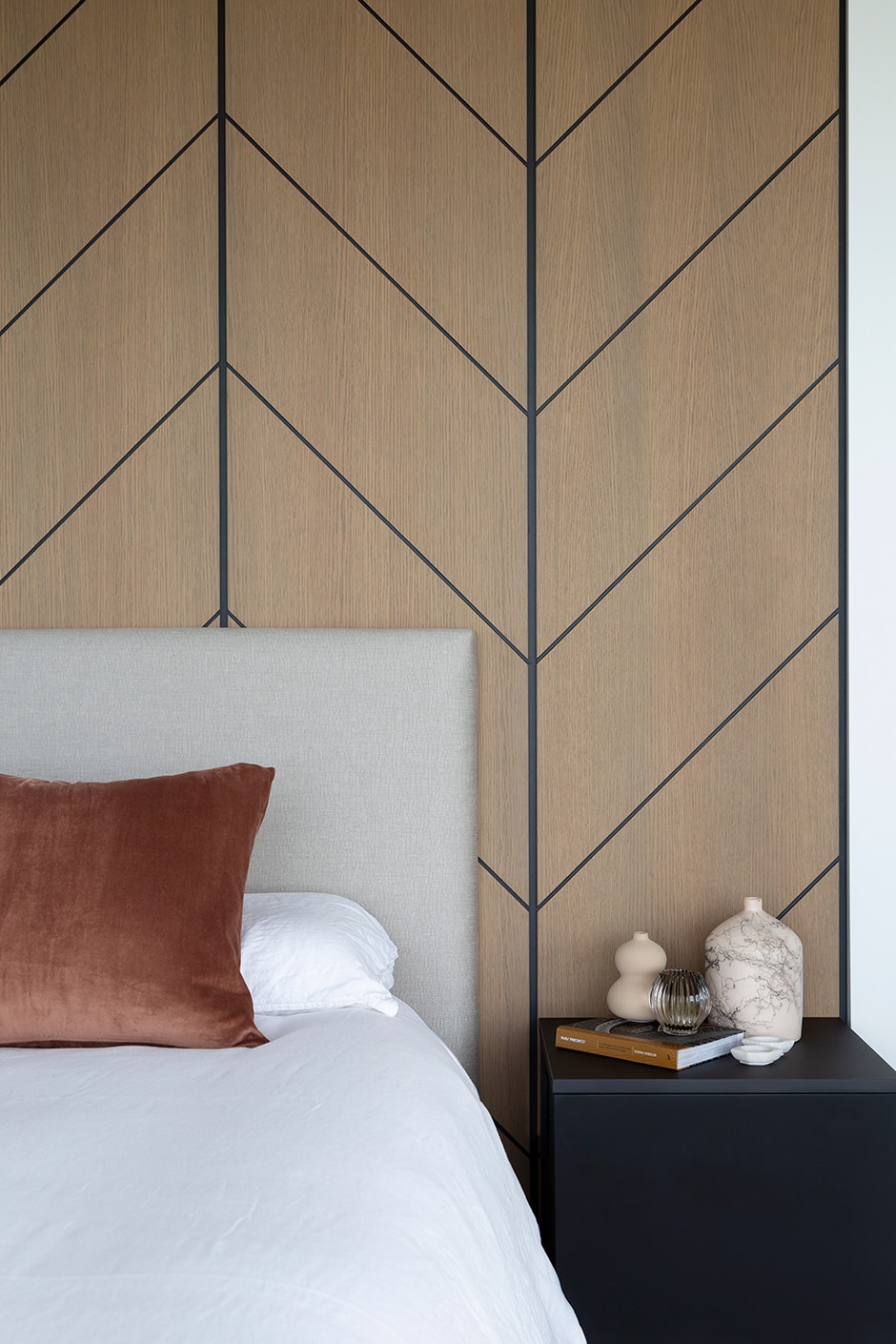 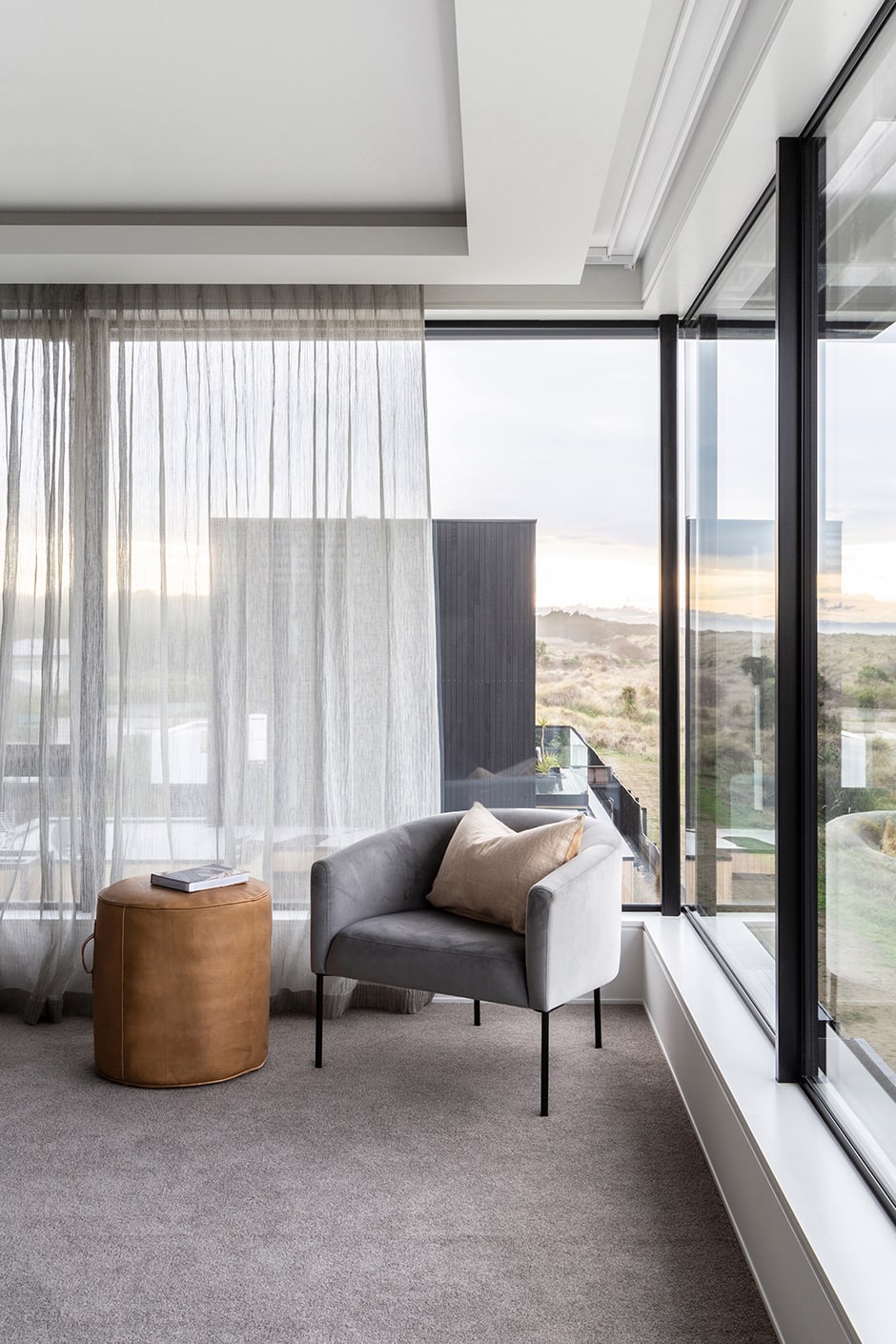 TOP This amazing ensuite was named the Supreme Bathroom Design winner in 2019’s NKBA Excellence in Design Awards. Strong bespoke elements like the mirrors crafted by Lyall Park Joinery and ceiling-hung heated towel rail made by DCShort join Starwood Noa Nebraska tiles in Coffee by Porcelanosa on the rear wall and Pearl Interno 9 wall and floor tiles by ABK. ABOVE Behind Jo and Blaise’s bed, a panelled wall by Lyall Park Joinery (in Prime Panels American white oak veneer stained to match the Prime Panels Baroque in the rest of the couple’s spaces) provides a visual link to the walk-through wardrobe and ensuite behind it. All the bedrooms have lighting integrated into the headboards for ambient light. Echoing the material palette in the kitchen, the custom-made bedside tables are in Prime Panels’ Soft-Matt laminate. Curtains in sheer Soleil Bleu fabric by Seneca fringe the windows. 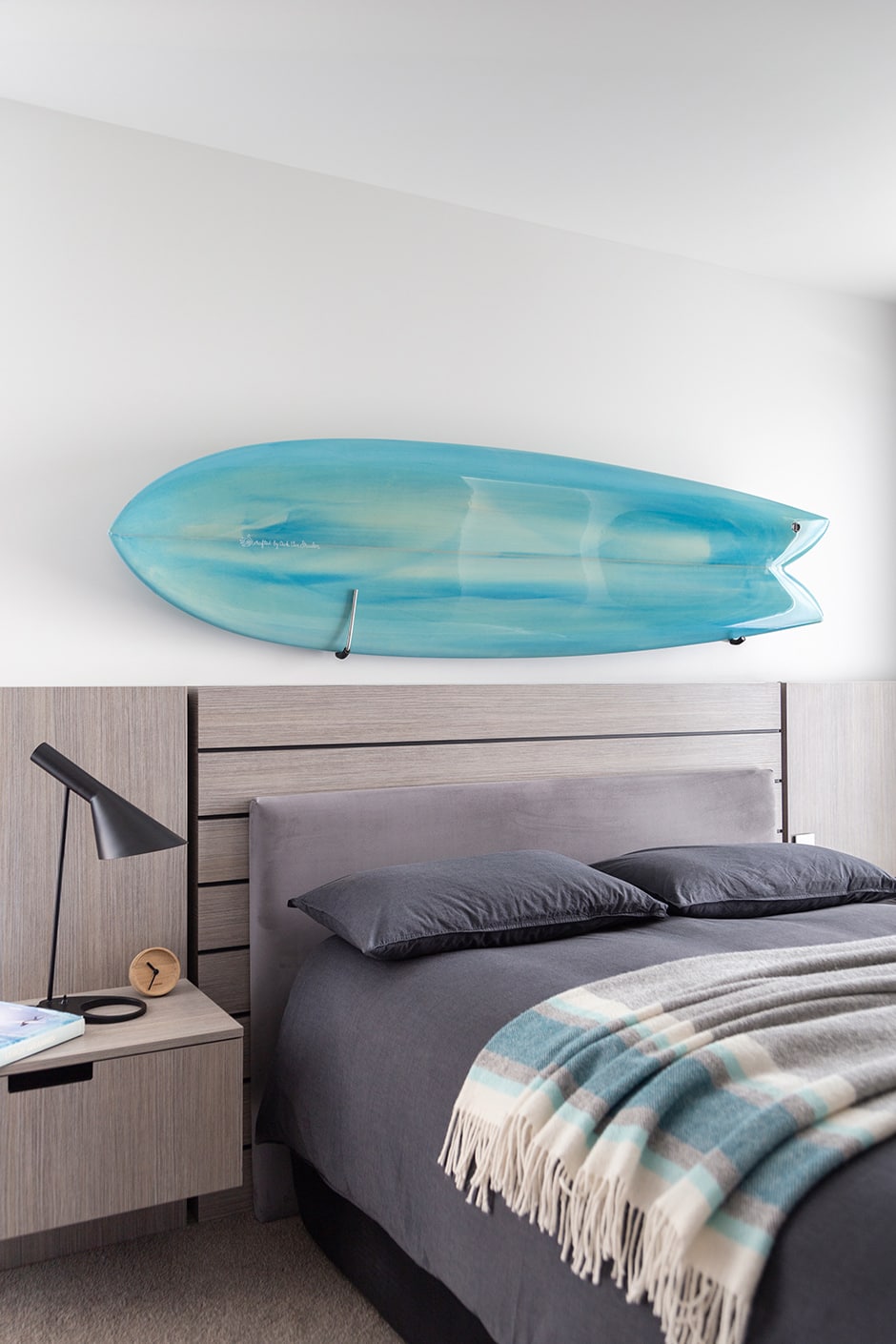 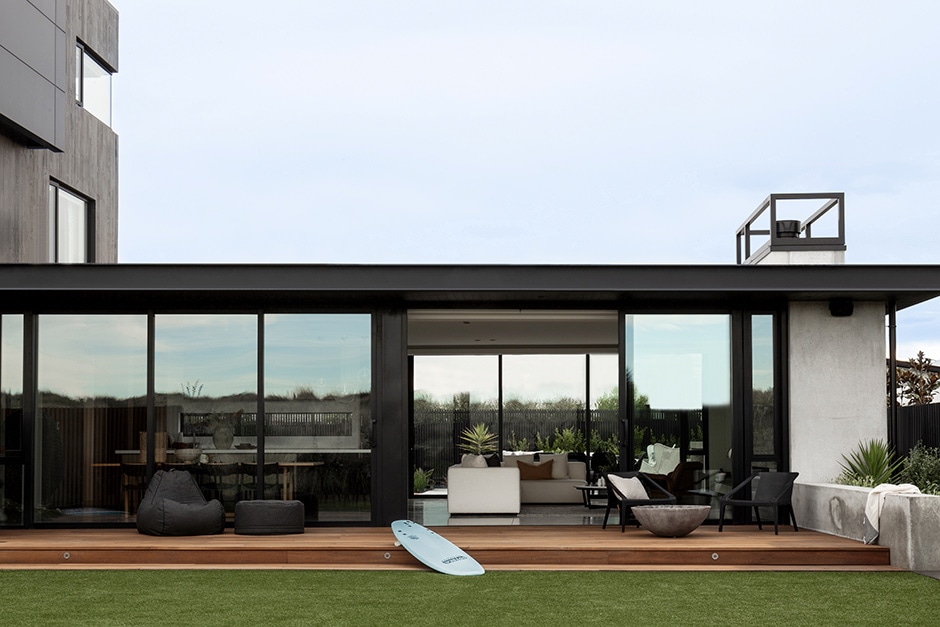 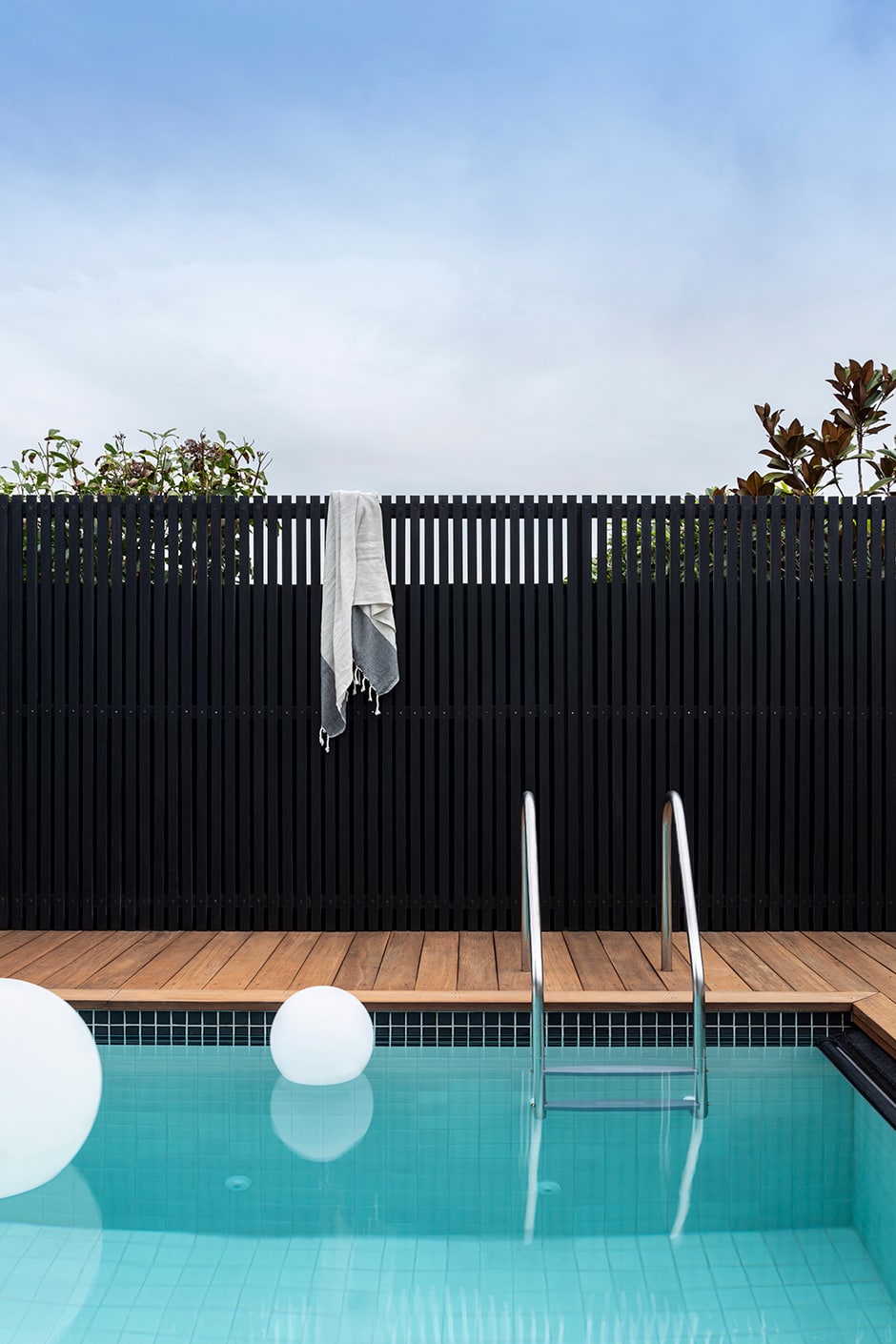 TOP Like Taylor’s, Tiago’s bedroom has built-in bedside drawers and wardrobe doors, and a matching headboard; Tiago’s is in Bestwood Milan Pine by Prime Panels in a Wilderness finish. Handcrafted by Australian surfer and shaper Dick Van Straalen, the surfboard was another of the couple’s on-holiday finds. “Much to the kids’ annoyance, I’ve so far managed to keep it out of the surf,” says Jo. MIDDLE Rising to the left of the living areas, the bulk of the home is in Peter Fell concrete in SuperBlack. Because the colour was mixed in before the walls were poured, no maintenance is required — a must in this location. As part of her plan for the outdoor areas, landscape architect Emily Hastie at Kamo Marsh designed a 6m concrete floating outdoor fire and barbecue unit to match the fireplace inside. She also added a 10m automatic cedar gate on the beachfront, which provides privacy when closed and unimpeded views of the beach when open. The plants in the garden are native species that will thrive in the windy, salty conditions.