All I want is you 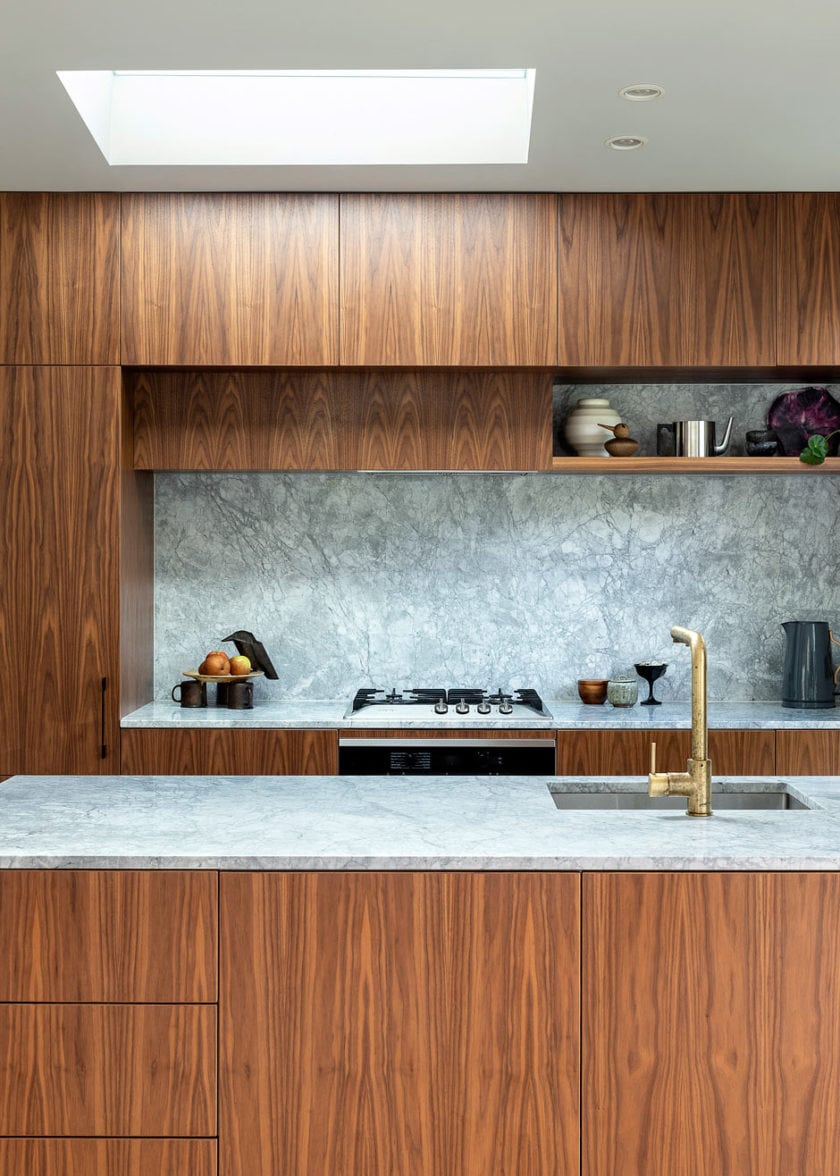 The renovation of this villa gave its three inhabitants exactly what they needed.

Jackie Rainey has her exquisite new ensuite all to herself. The witty, whip-smart lawyer probably shouldn’t be surprised she’s succeeded in achieving this enviable state of affairs, yet she’s still not 100% sure how she swung it. Long may it last, though, and she deserves it — she lived with a freakin’ bike workshop in her lounge for several long years.
It was her and her teacher husband Peter Radonich’s son Oscar and his many sets of wheels that were the catalyst for the next-stage renovation of their 100-year-old Grey Lynn villa. They’d updated the odd thing in their decade-and-a-half here, but with Oscar’s obsession with bikes growing by the day, he needed somewhere (anywhere but the spare bedroom or living room, really) to store and work on them. Doubting any architect would sign up just to build a shed in their garden, the couple got to thinking about what else they’d like to upgrade. Then, engaging architect Rebecca Walker of WalkerMitchell, they set about building a workshop and ensuite, and overhauling their kitchen. 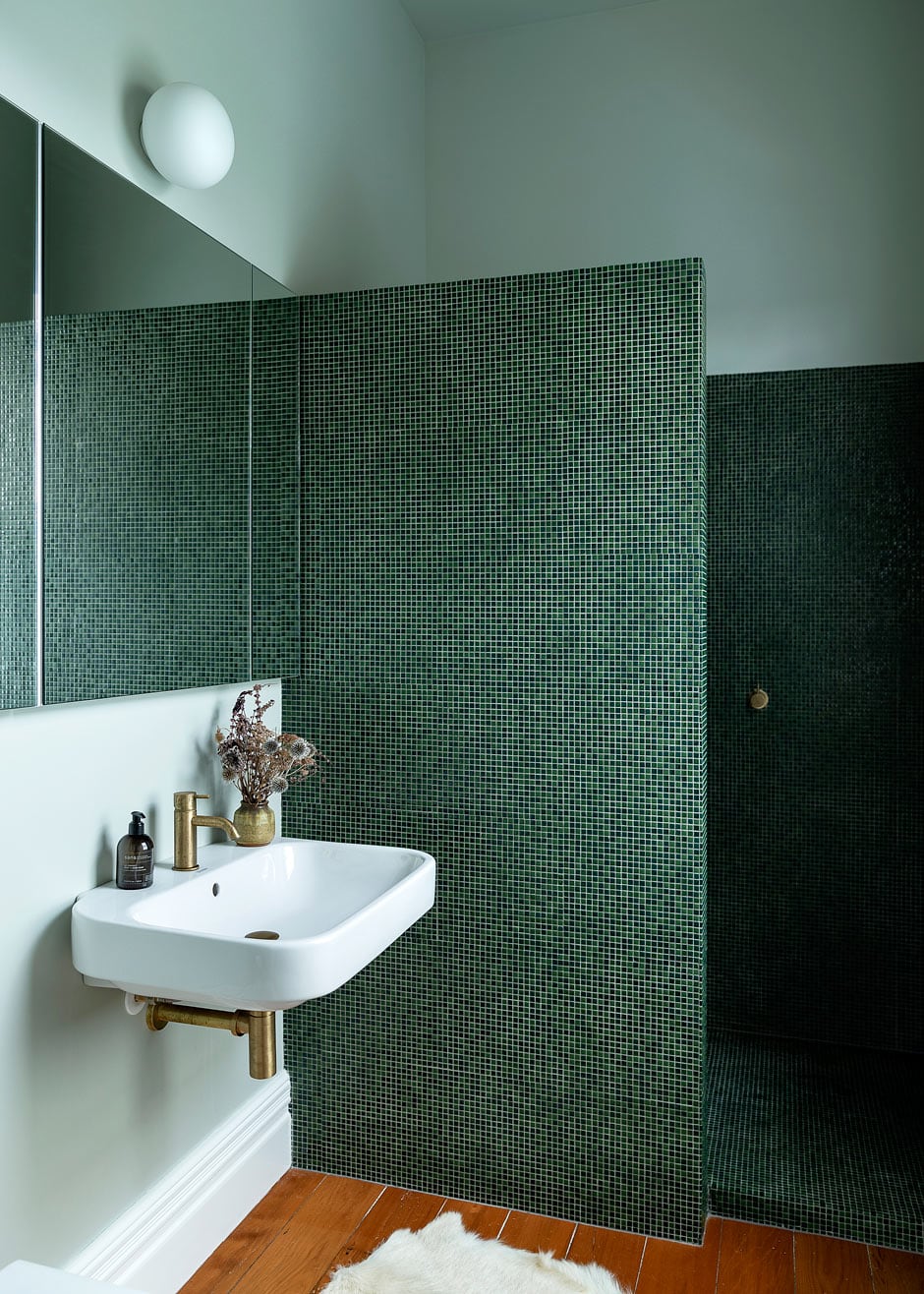 ABOVE “I love everything about my ensuite,” says Jackie. The glass mosaics are Opus Romano Cleofe
12 tiles by Bisazza from Tile Space and Peta, whose skills Jackie considers “amazing”, chose Resene Lemongrass for the walls. Also pictured here is a Glo-Ball wall light by Jasper Morrison for Flos from
ECC, Buddy tapware from Plumbline and a Duravit basin from Metrix.

Formerly a storeroom, the ensuite at the front of the house is now an absolute masterpiece. Compellingly simple with a masculine slant, every detail is a triumph, but the shower is the true highlight, clad in green Italian tiles and with a view of the tall plane trees that line the street outside. For this, the collaboration between the couple, Rebecca and Tauranga-based colour and design consultant Peta Tearle was supported by Jackie’s dear dad, Peter Rainey, a professional tiler who did a meticulous job on those tiny glass gems, devoting himself to his daughter’s cause by working every day for two weeks straight to get it finished just so.
“People can’t believe I’m the only one who uses it!” laughs Jackie. “I mean, of course, if someone’s using the main bathroom, Pete and Oscar are ‘allowed’ to use the ensuite, but the other day Pete said, “Oscar’s in the bathroom — can I use your shower?’ And I said, ‘Can’t you just wait for Oscar to get out?’ Pete is not someone who seeks any form of permission, but he just seems to have accepted it!” 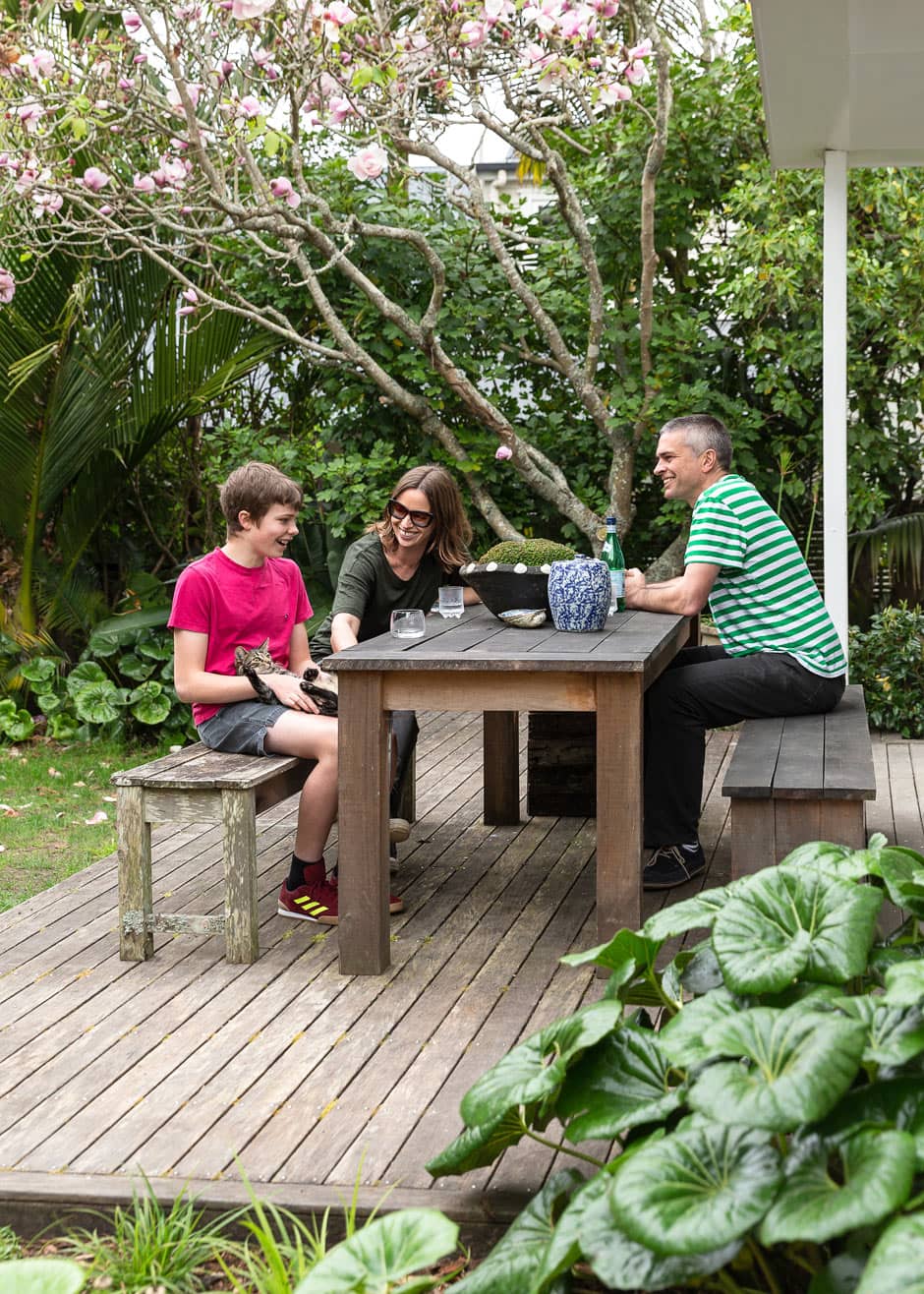 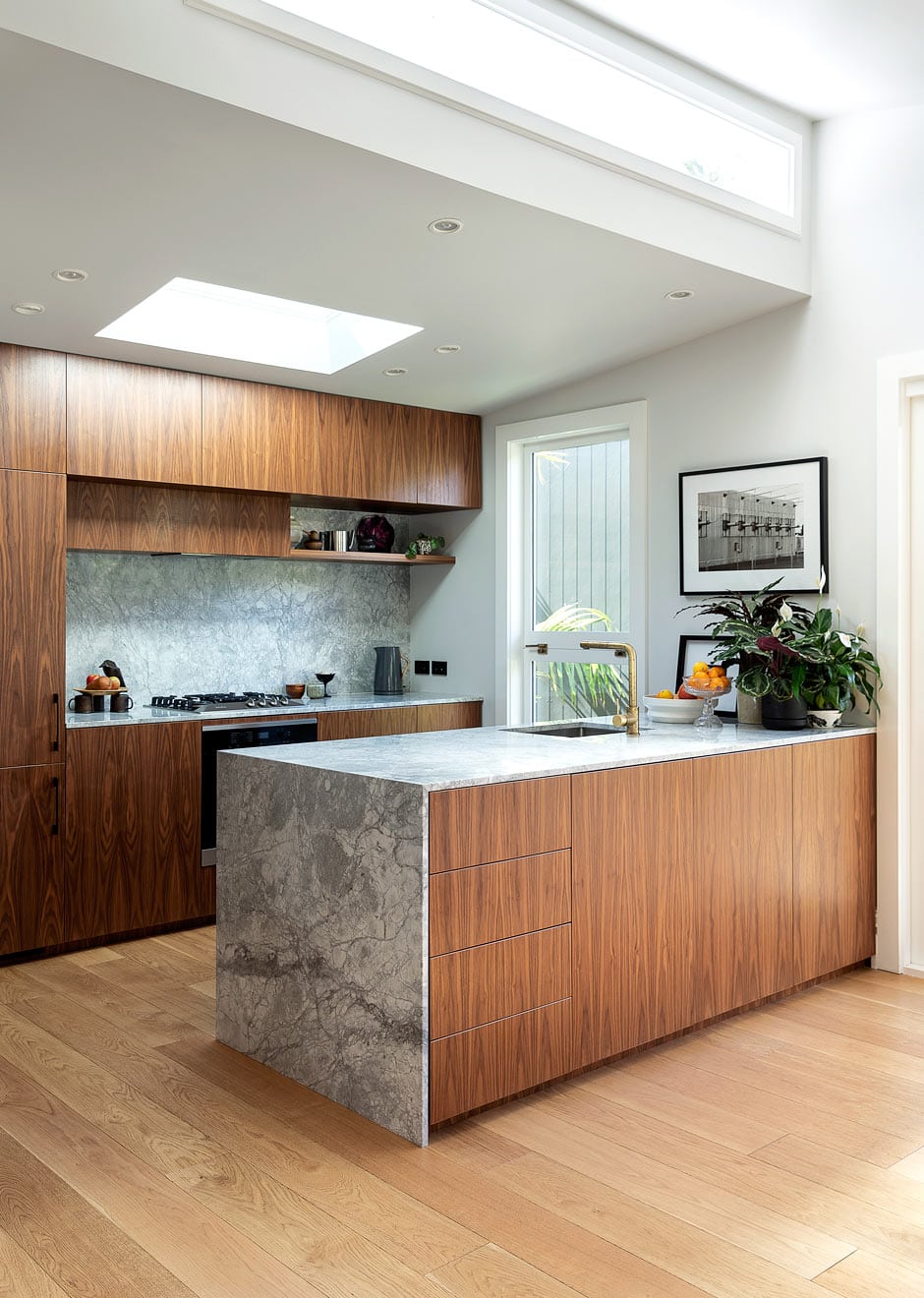 TOP “Initially, we did a grand design for a large workshop and guest room, but then we got it costed and realised there wouldn’t be any budget left for the kitchen,” says architect Rebecca Walker of the early plan for the impeccably designed shed that sits to the left of the deck, with a plywood interior, a polished concrete floor, double- glazing and an expert connection to the house. “Meanwhile, Jackie and I had been falling in love with the beautiful veneer and granite for the kitchen, so we ganged up on the boys and rearranged our priorities.” ABOVE “The kitchen is the standout area for me,” says Rebecca. “I love the contrast and richness of the dark wood against the granite, plus the space now relates to the dining area in a way that it didn’t before and opens onto the deck, creating a much more inviting family and entertaining area.” The soft-close cabinetry here is American walnut Prime Veneer from PrimePanels and was crafted by cabinetmakers Dockside Thirty Seven. The Super White Brazilian granite is from Architectural Stone, the Buddy tapware is from Plumbline and the handles and hinges are from Chant. On the walls is Resene Wan White.

Cheaply redone in the early ’90s, the more communal kitchen at the rear of the house was due for a fix-up. Now as you walk down the hallway towards the open-plan living area, the island reveals itself like an elegant piece of furniture. Walnut-veneer cabinetry gives the space a mid-century feel, but combined with the grey-veined granite of the benchtops and splashback, the mood is undeniably modern. “It’s small but works really well,” says Jackie. “The functionality is fantastic.” 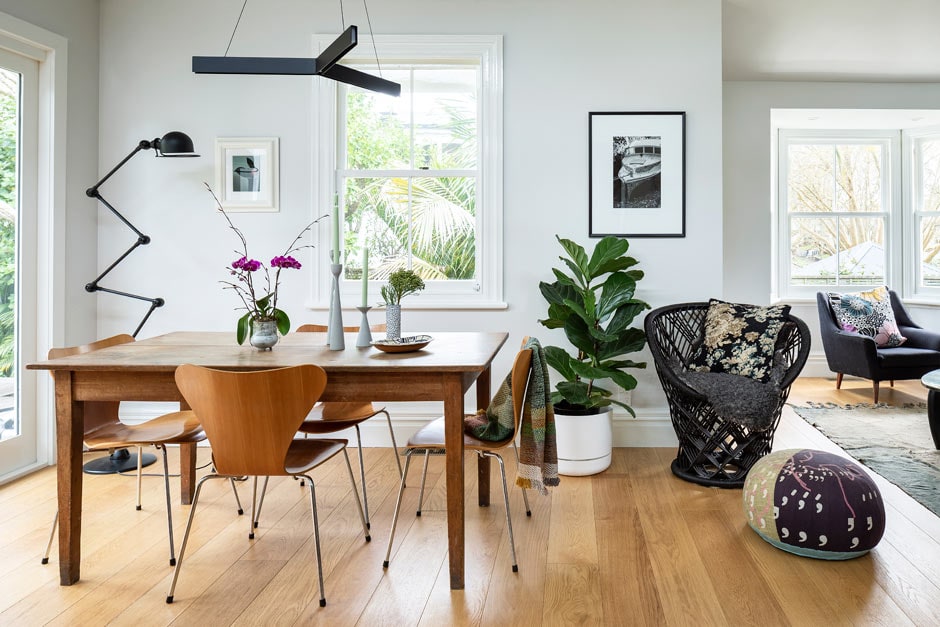 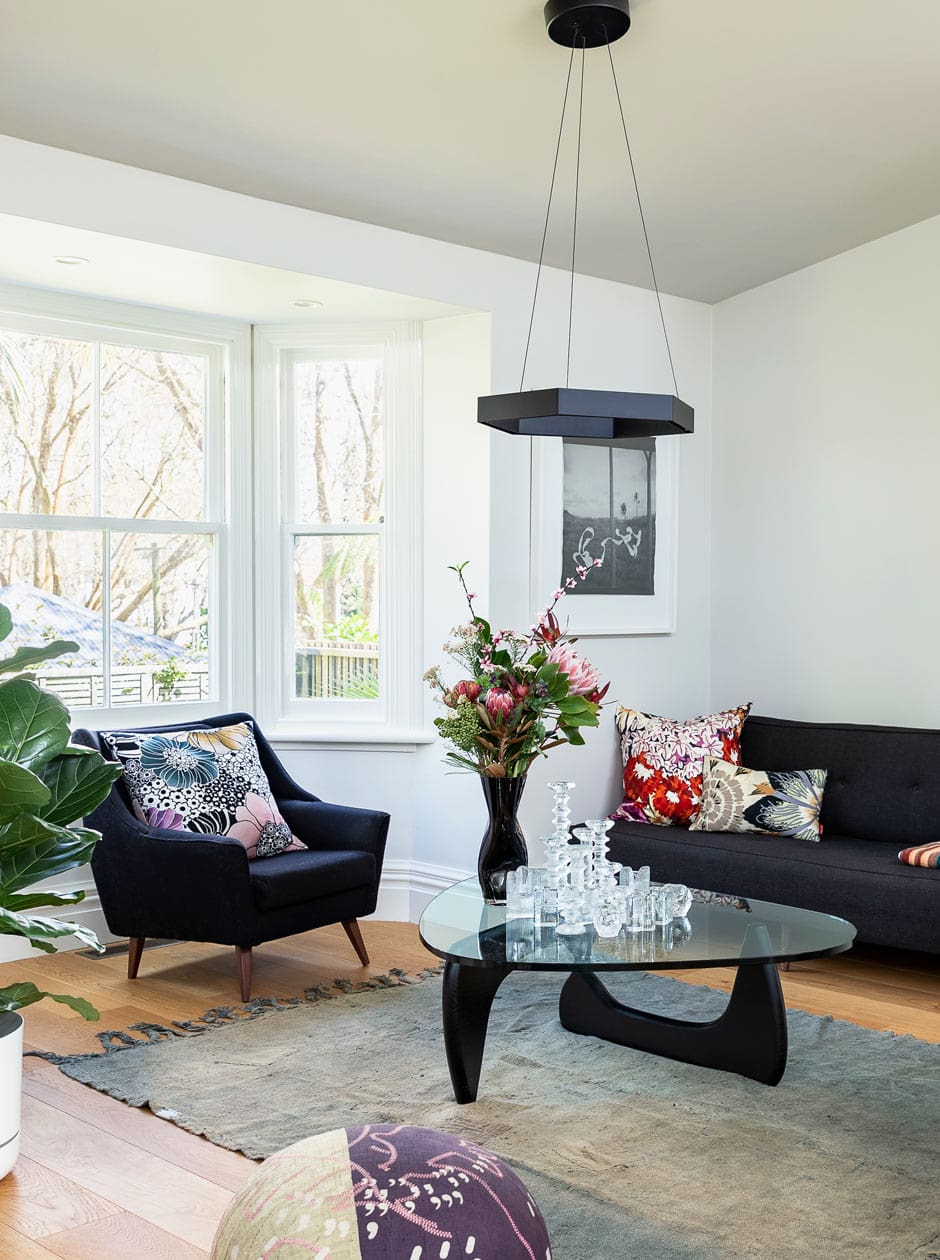 TOP “I find lighting crucial to the outcome of a design and put a lot of thought into it,” says Rebecca. “[In the dining/living area] I really wanted Pete to be able to see to work at the table and for the couple to be able to create a different mood when guests are over. The pendant here is a soft, dimmable feature light, and the recessed downlights are there for task lighting.” Joining them is a floor lamp by Jieldé from Flotsam & Jetsam. ABOVE A lot of the family’s furniture is second-hand, including this chair and sofa, which they had reupholstered. The Hex 750 pendant by Resident that hangs above the coffee table is from Simon James, and Jackie has collected the mid-century glassware from all over New Zealand, Sydney and London. The cushions are by Missoni from Tessuti and the ottoman is by Hella Jongerius for Vitra, scored on sale from Matisse.

New bi-fold doors connect the kitchen and dining area to the shed, which is accessible from the deck not via your usual pavers but by long concrete slabs — because that’s how Oscar approaches, on the diagonal. That and other clever details in the garden are the handiwork of landscape architect Richard Neville of Xanthe White Design. “He was brilliant — really sensitive and thoughtful,” says Jackie. “There was even one plant we couldn’t get from the nurseries, so he dug one out of his sister’s garden. That was next level for me.”
A floor-to-ceiling window in the kitchen frames a glossy bed of tractor-seat ligularia, forming a virtual living artwork, while a skylight overhead lets in still more sun. Jackie says Rebecca (aka ‘the oracle’, as Jackie and builder Mike Lambert came to know her) was dead right about every element of the renovation, lighting included. “Pete works a lot of extra hours at the table and was sick of working in the dark,” says Jackie. “Now he says that’s the thing he’s most happy with. As far as he’s concerned, we could have skipped the whole renovation and just spent a few hundred bucks on lights.” 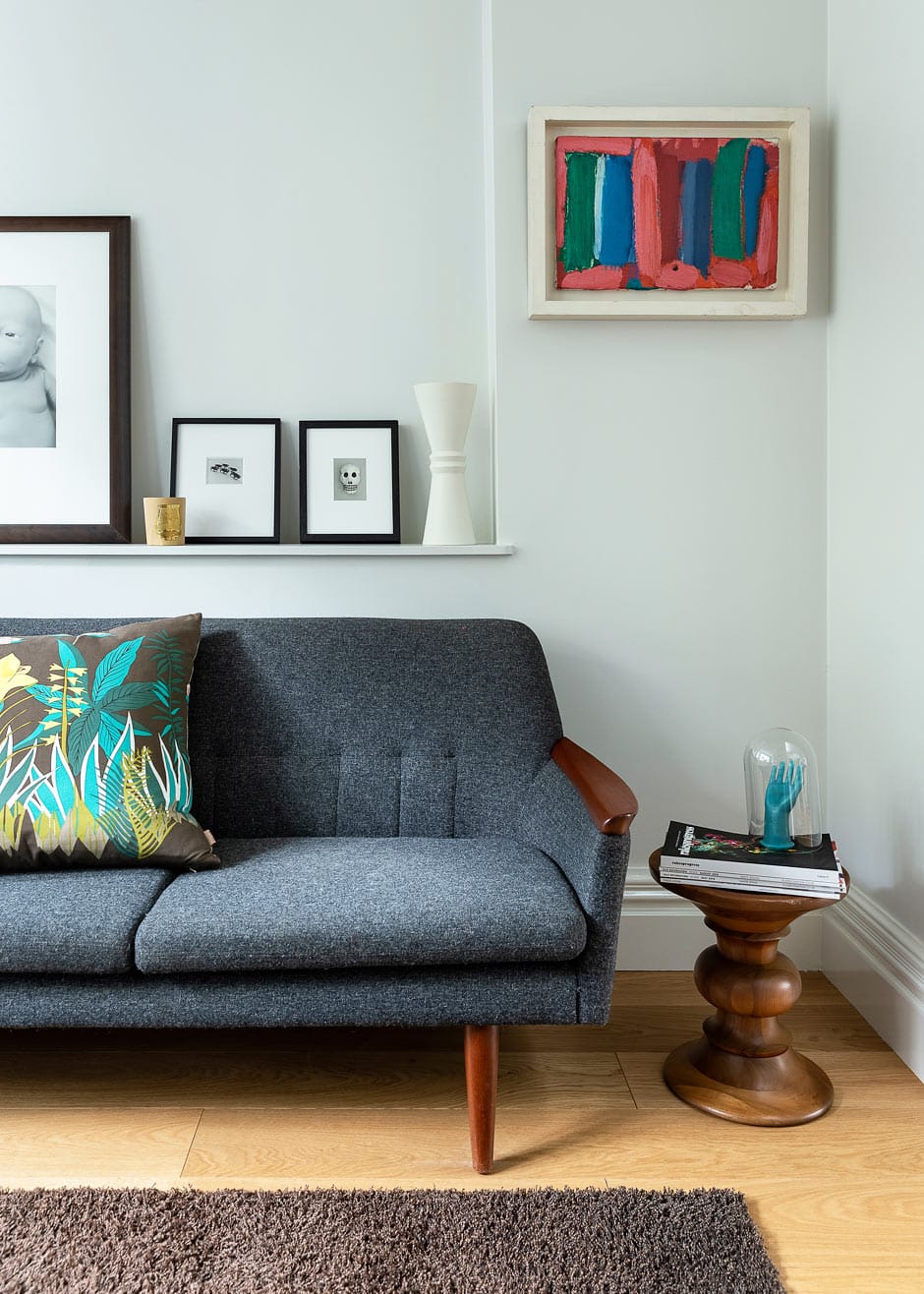 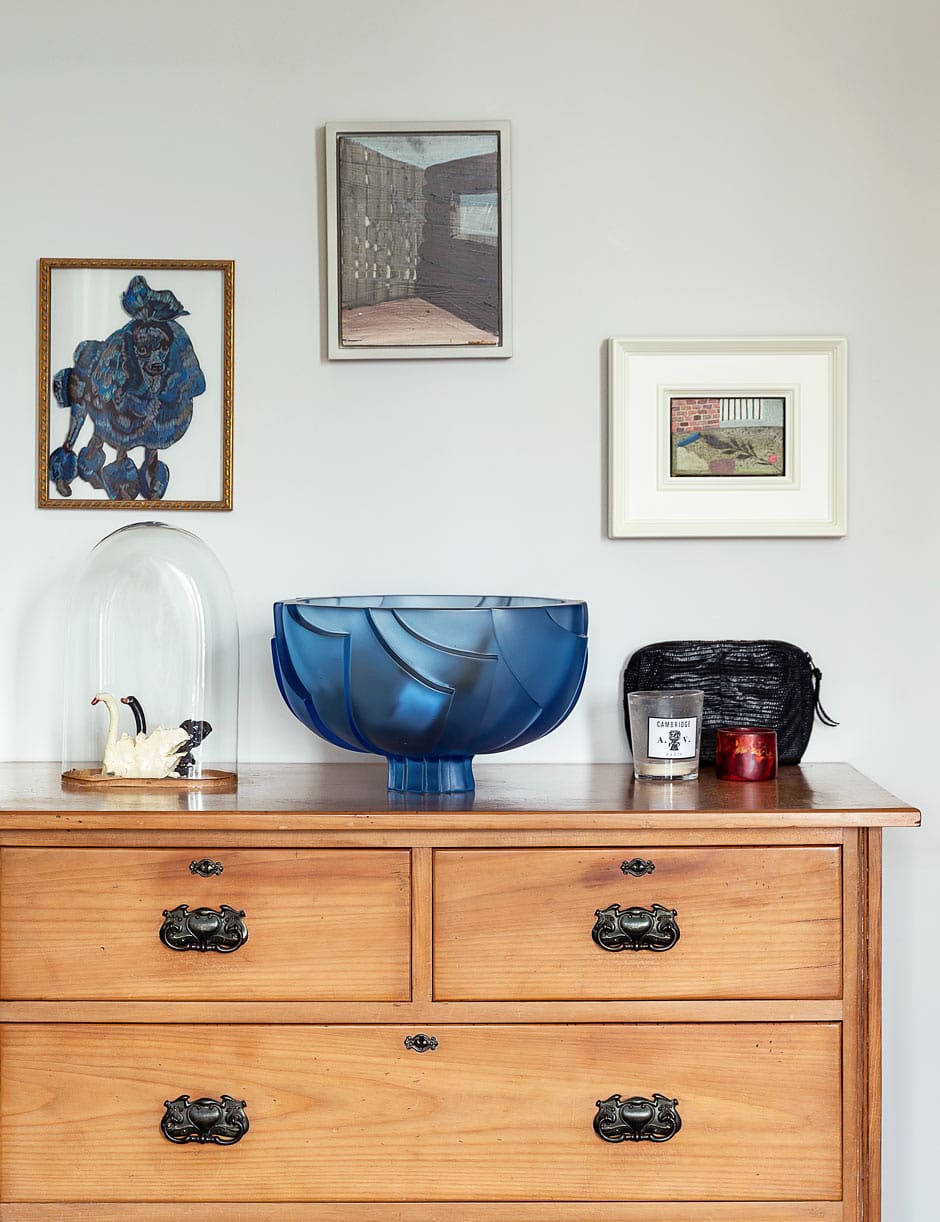 TOP Jackie and Pete both love photography and the house is filled with design objects and art — all meaningful and hard-earned. “It’s what your priorities are,” says Jackie. “I drive a really shitty car — some people wouldn’t be seen dead in it.” Adjacent to the main living area is a media nook with a beautiful in-built bookcase made by Jackie’s dad and Pete. The sofa beside the Eames side table is from Christchurch mid-century store Mr Mod and the bright artwork above it is by Alan Gouk. ABOVE The artworks above the dresser in the master bedroom are by (from left) Sam Mitchell, Tim Thatcher and Andrew McLeod, the ceramic swans are by Martin Poppelwell and the Copper Blue Ice bowl is by Ann Robinson. “Both my grandmothers had very cosy, layered homes with lots of collections in them,” says Jackie. “Everything had a story behind it, and now I like ‘dust collectors’ too.”

These are the best of times: Pete loves his new set-up, Jackie’s living the dream with her ensuite and Oscar’s “bloody lucky” they renovated the house for the sake of his hobby. “At the beginning of the renovation, Rebecca said, ‘Once you’ve done one, you’ll want to do more’,” says Jackie. “Partway through I thought, ‘There’s no way I’d ever do this again’, but at the end of it, I could see how I could.
“Within reason and your budget, you do get what you want that reflects you. I like every single thing in here. The kitchen is much better for entertaining and has heaps more storage. Having two bathrooms when you’ve got a teenager is brilliant, and the shed has changed our lives, not having all those bikes inside. It’s fantastic.”