All the small things 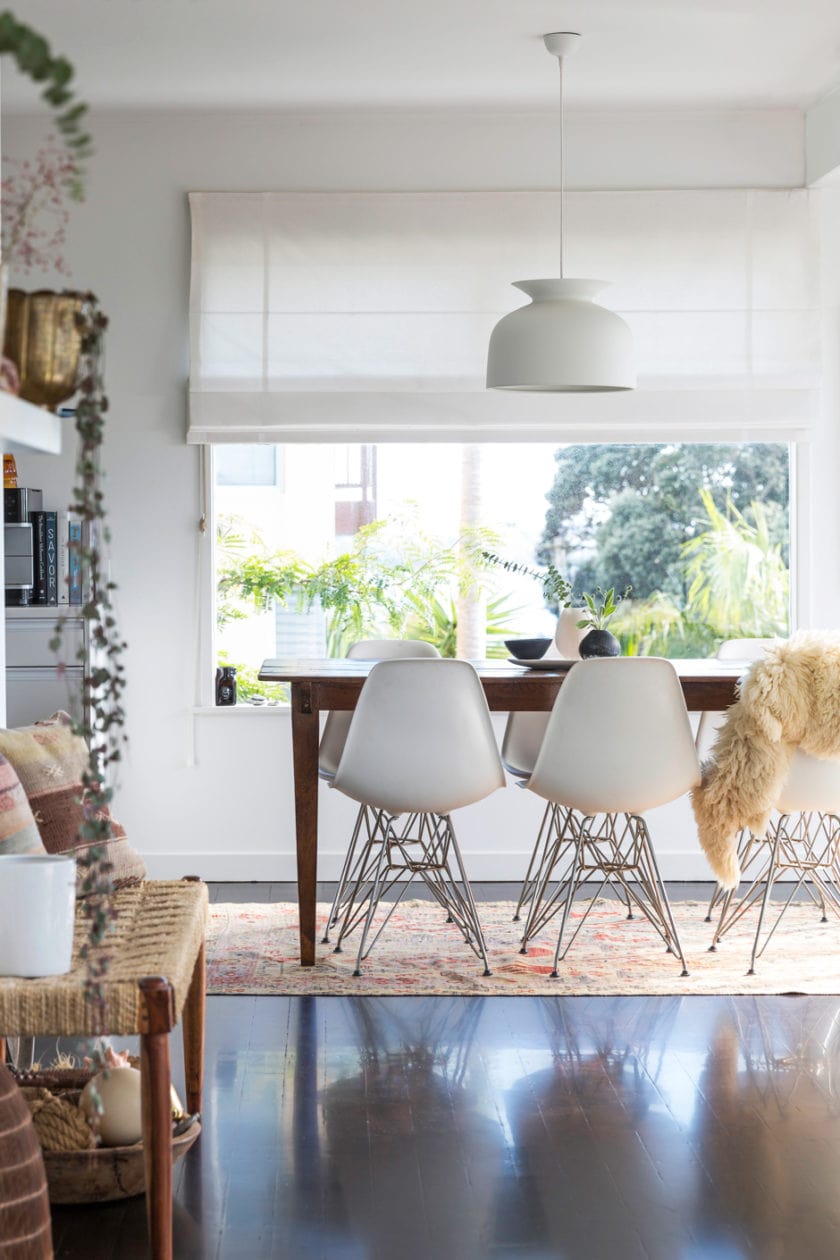 An inexhaustible collector discovers the beauty in a brick-and-tile home built in the ’60s.

Bowerbird by name, bowerbird by nature, Auckland interior stylist Joanna Cowie (aka @bowerbirdjo_wanders) is a collector through and through. Look to your left as you enter her Murrays Bay home, and behold the ever-growing set of tiny wall-hung aeroplanes engraved with the destinations she, her CEO husband Neil and their three children have travelled to. Continue past the bowls full of vintage keys and other enchanting ephemera and you’ll see shelves displaying an assortment of secondhand cameras. But it’s in the guest room where her lifelong talent for finding treasure comes into its own. Sliding open the drawers of her apothecary-style cabinet reveals beautiful butterflies, spiky coral, pale green sea eggs and all kinds of other curios.
She laughs as she recalls how it all began. “When I was nine, I went to a friend’s house and she had a little blown bantam egg. I’d never seen one before, and I wanted that egg, so I swapped my gold signet ring for it. Her mother said, ‘Are you sure your mummy won’t mind?’ and I said, ‘No.’ Well, I never told my mummy, and how bad was it that she let her child take my ring?! It was so wrong, but that was my first thing. I’ve collected ever since.” 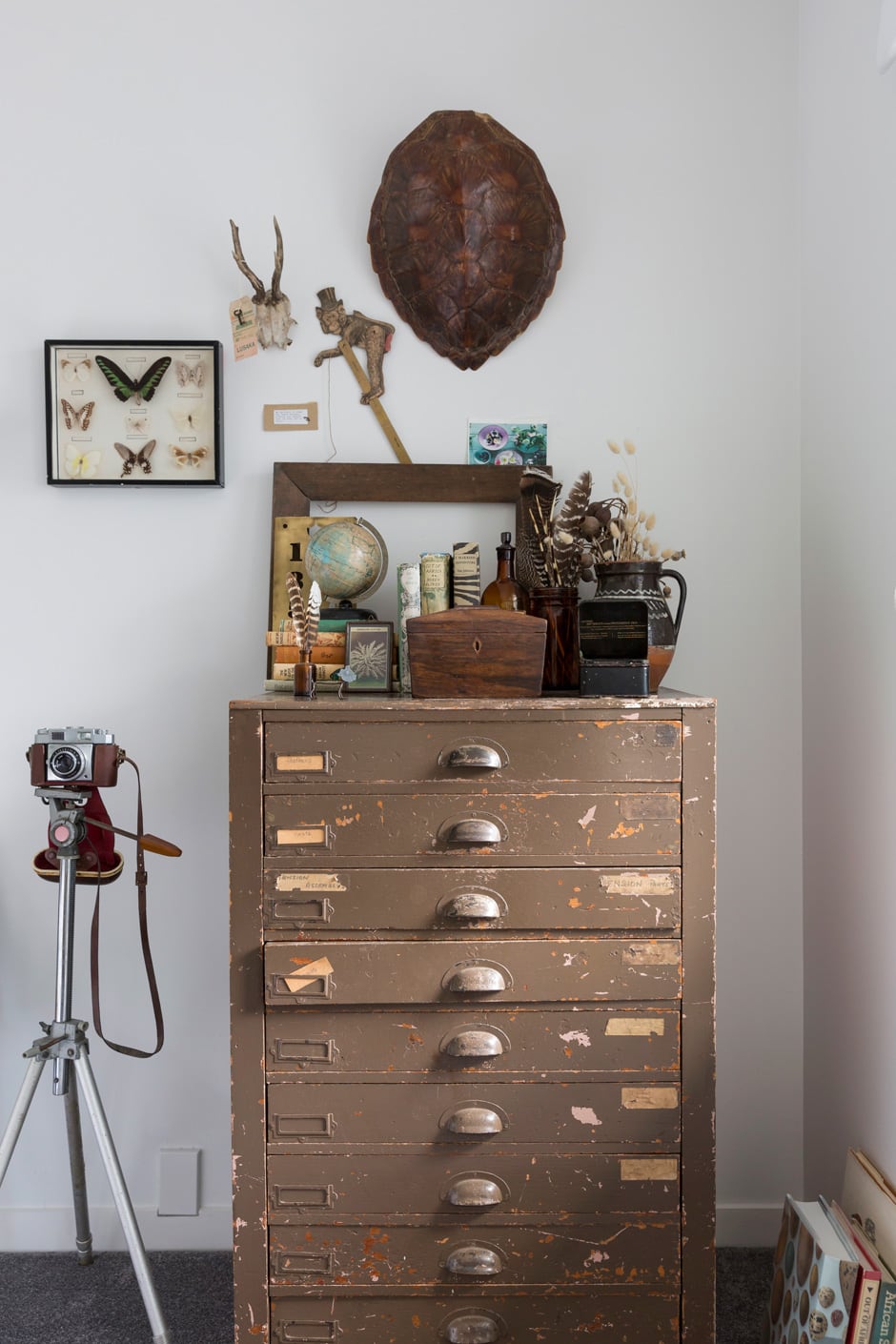 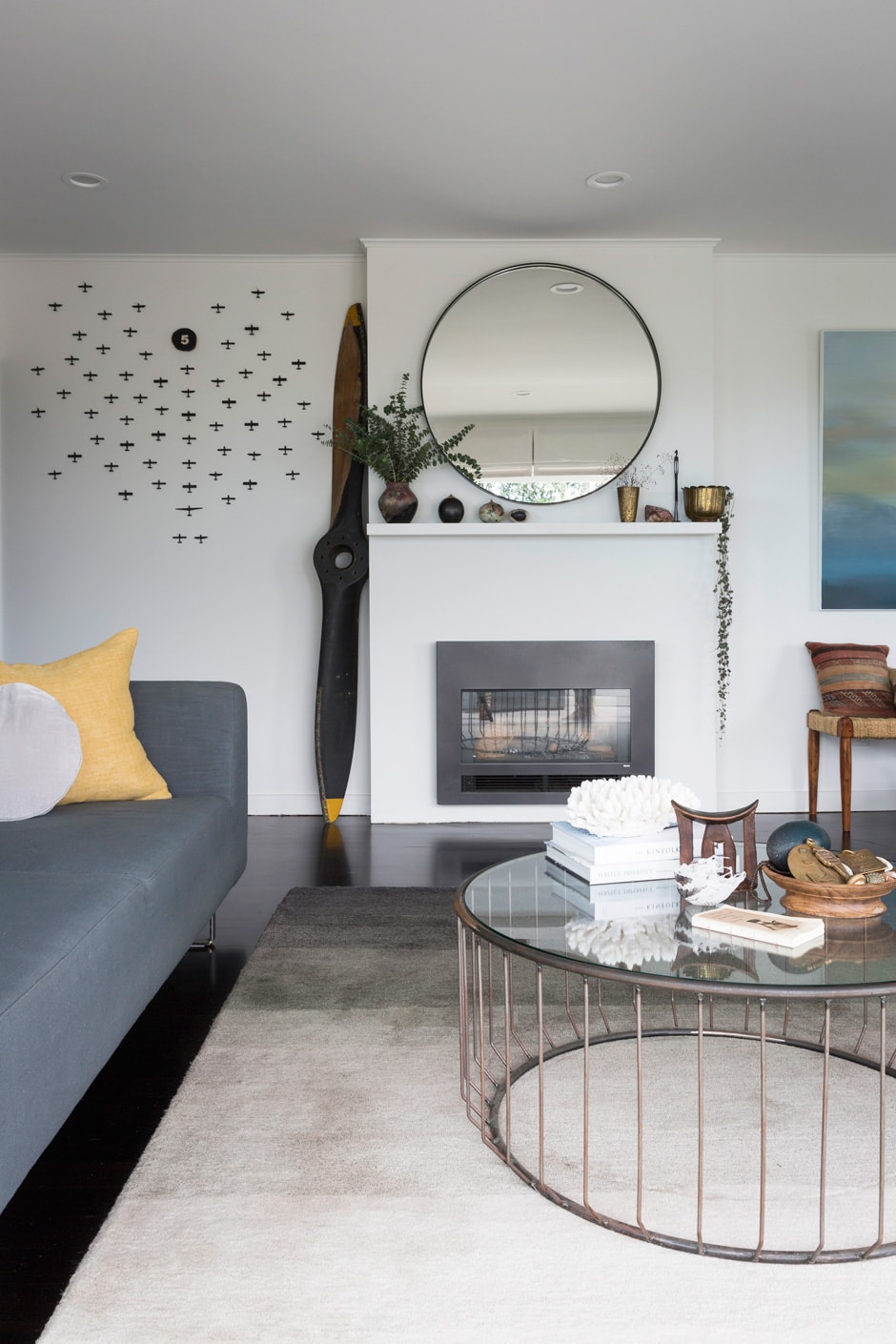 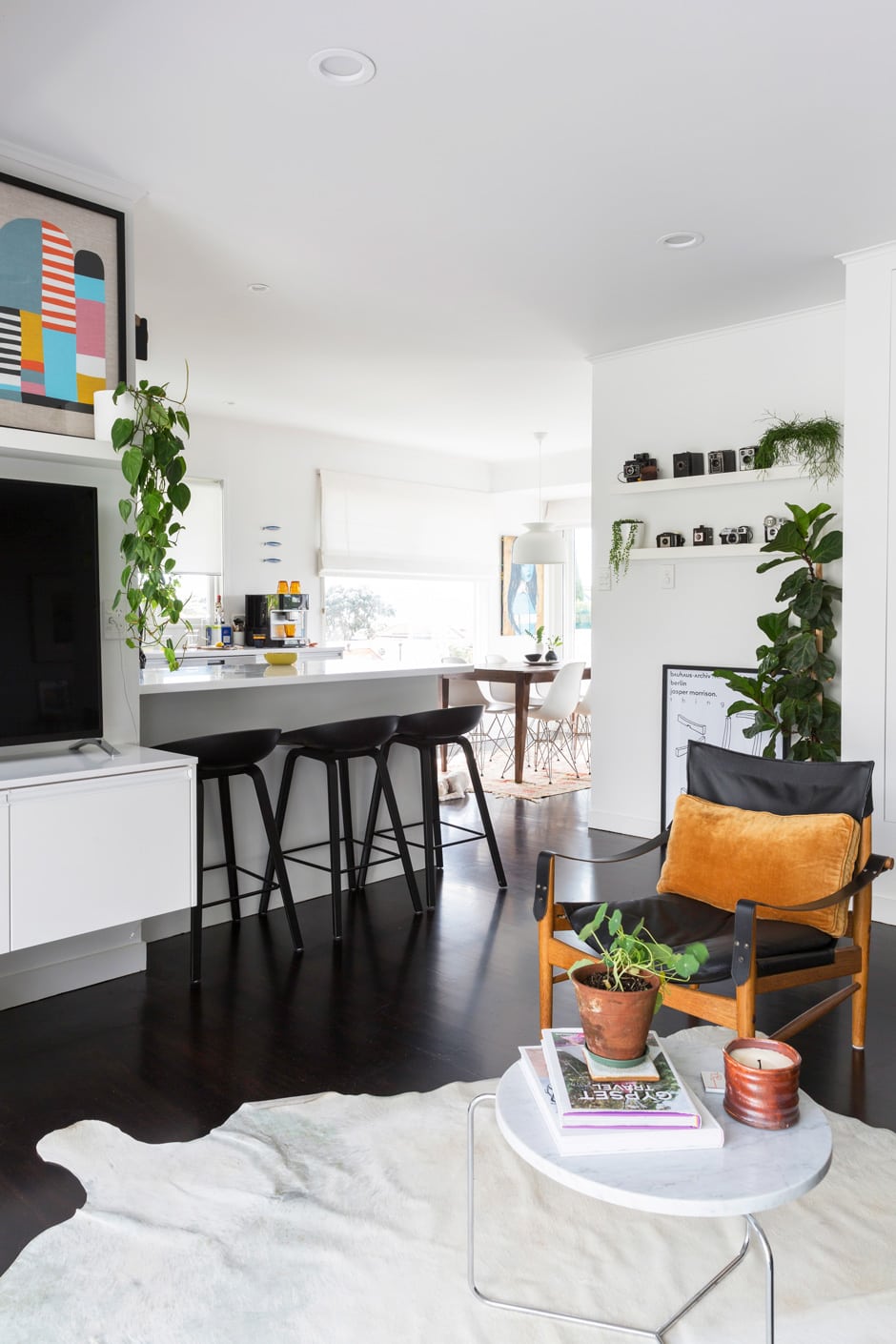 TOP The guest room is full of collected artefacts – from found feathers, to vintage bottles, to early editions of Out of Africa – and a cabinet from Flotsam & Jetsam that holds decades of fantastic finds. MIDDLE Near the entry, a collection of Destination Planes by Michele Bryant from The Poi Room depicts the places the family of five has visited together. Beside it is a wooden propeller found at Blikfang Art & Antiques. The mirror is by Home Industry. ABOVE On the shelves in the rear living area is a collection of vintage cameras. Jo says one of her and Neil’s best finds was the vintage safari chairs by Hans Olsen they stumbled across one weekend while out for a coffee. “We just popped into Karakter nearby, saw them and had to have them.”

Decades of irresistible finds now live alongside Jo and Neil in the 1960s dwelling they’ve turned into their forever home. Having built and renovated many times while living in South Africa, then New Zealand, then Australia, they bought the single-storey brick-and-tile home shortly after their return to Aotearoa, with a view to doing it up and moving on. Planning to retain the original footprint but transform it into a light, bright haven with good flow, the couple brought Matt Davy of Dave Pearson Architects on board with builder Kent Sulzberger and his team at Rusa Construction, and set out to “get it right”. In the end, it took them eight years.
“We just kept thinking, ‘Let’s change this, let’s change that’ – so it’s been ongoing, but we’ve got to the point now where we really like it,” says Jo. “This is the longest we’ve ever lived in one place – and we didn’t intend to stay, but it grew on us.” 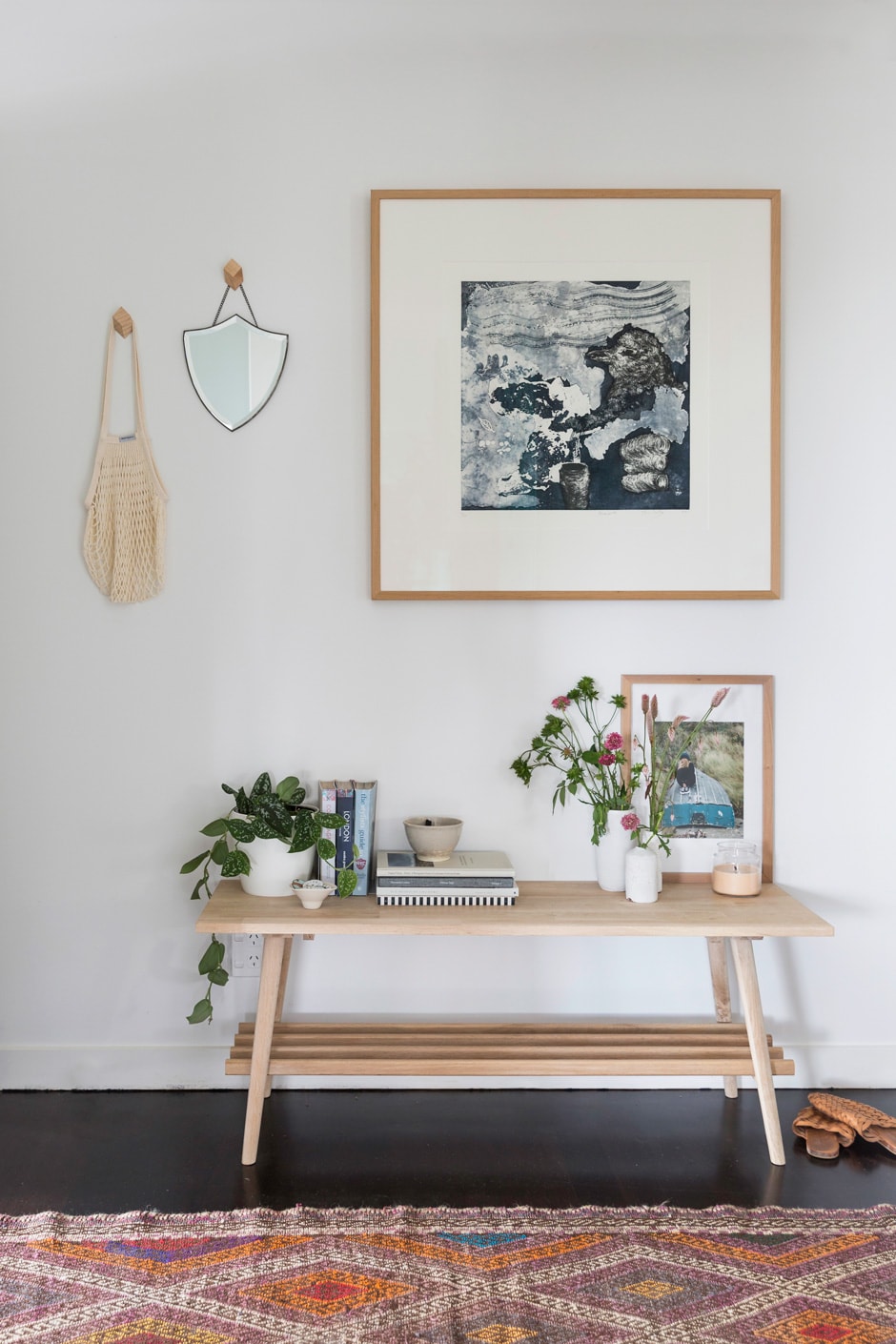 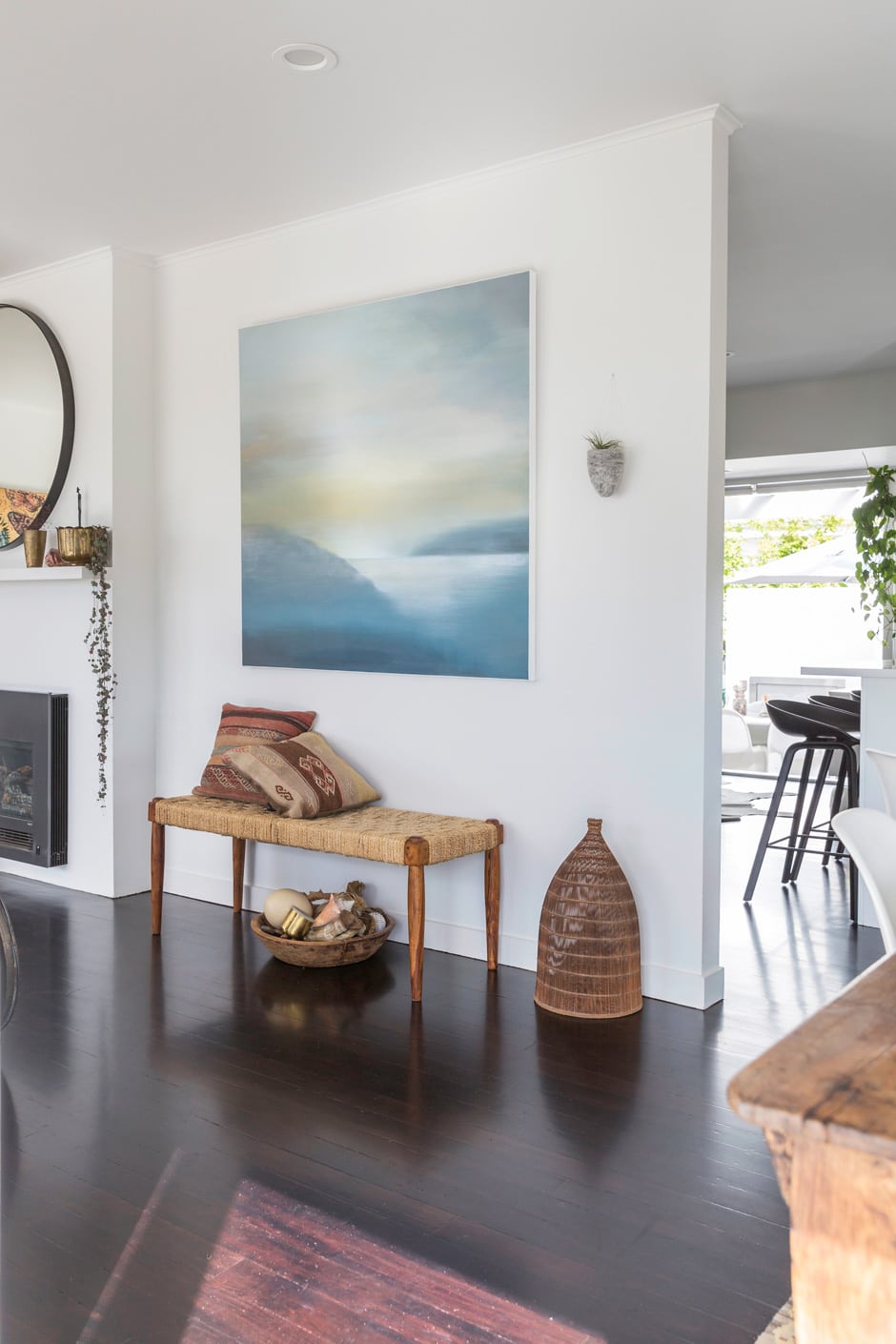 TOP Regular travellers, Jo and Neil pick up interesting pieces wherever they go. “I bring home anything I can fit in my suitcase: unique ceramics, vintage keys, linen, candles…” says Jo. This vignette by the front door includes a bowl-like vase (centre) by New York artist Natalie Weinberger that Jo tracked down on a recent trip to the Big Apple. ABOVE This dreamy artwork is by Greer Clayton.

First in line for renovation were the bathroom and kitchen. Don’t even get Jo started on the latter, however – it’s recently been redone for a second time. “They say you should live in a home for a couple of years before you embark on a renovation, and it’s true. The initial kitchen renovation was an epic fail, which we had to live with for seven years. We were bitterly disappointed, but hey, that’s life – you’ve gotta have some curveballs.” 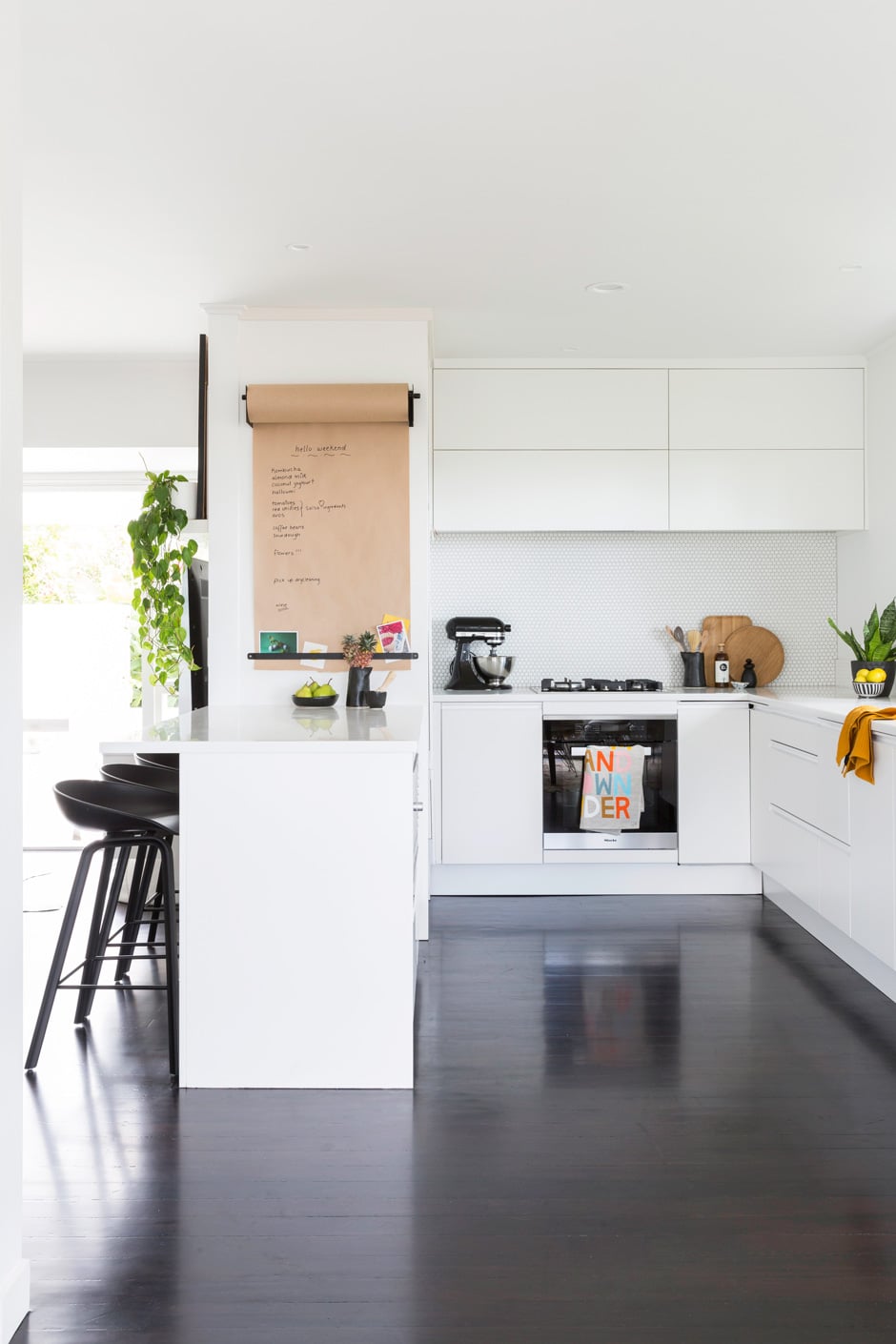 ABOVE It was second time lucky with the kitchen, where About A Stool stools by Hay turn the bench into a breakfast bar. Small but perfectly formed, there’s no dead space in the new version designed by Heather Wood of Stewart Scott Cabinetry. Pull-out storage in the corner cupboards, hidden storage in the kickplates, overheads that float open with the touch of a finger and soft-close drawers are among the features Jo loves. “And I’ve got a massive, deep sink, which is ideal for large dishes and soaking all my pot plants.”

Stage two opened up the house front and back. To harness the all-day sun, they added sliding doors in the dining area and living rooms connecting to decks at either end of the house. Cosmetic changes were made throughout – new doors, hardware, carpet, skirting boards, Roman blinds and shutters – and they took to the interior walls with Resene Black White and the previously rust-coloured exterior with a custom-mixed lime-wash concrete paint, which will develop a European-style patina as it weathers. 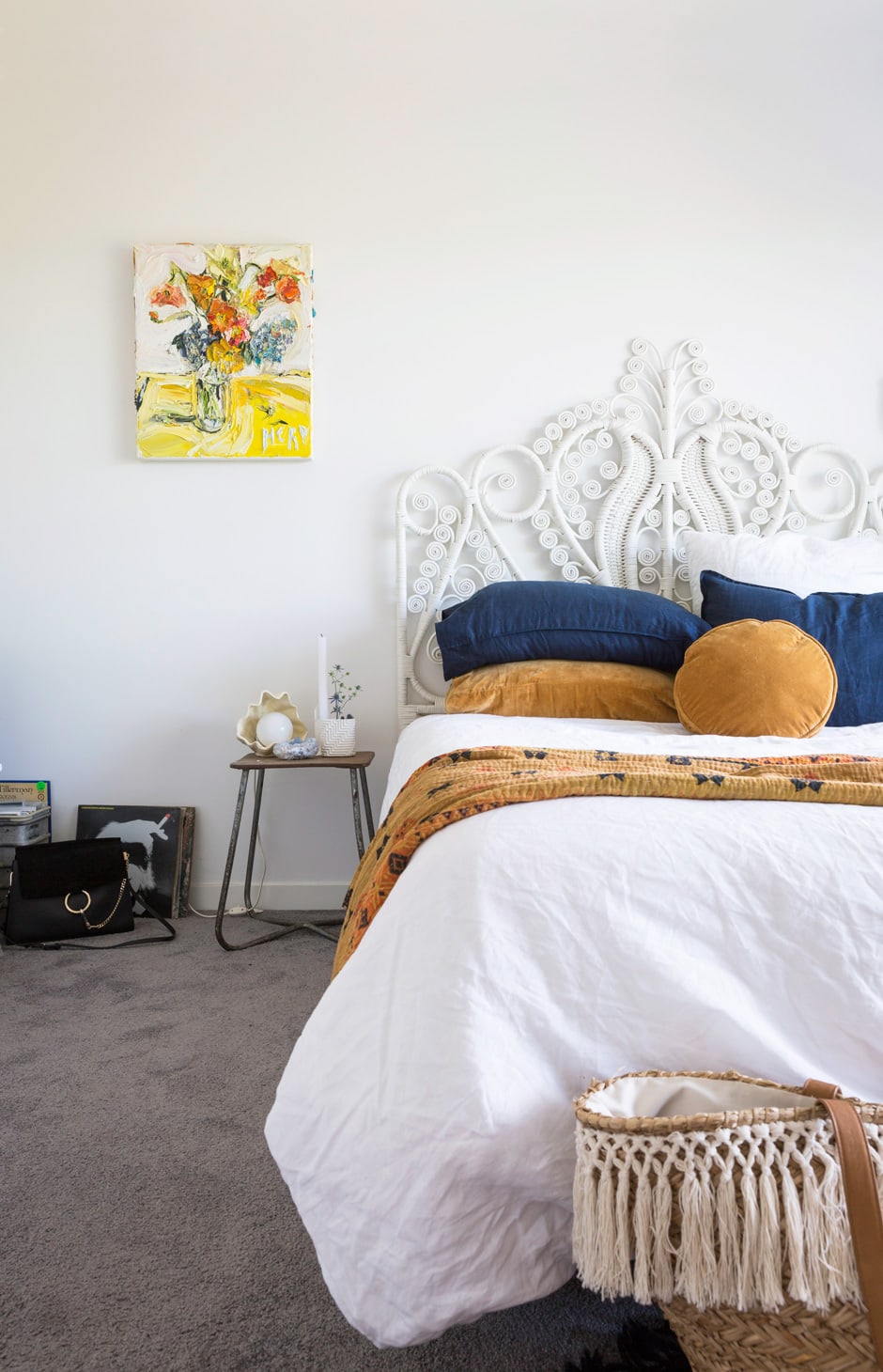 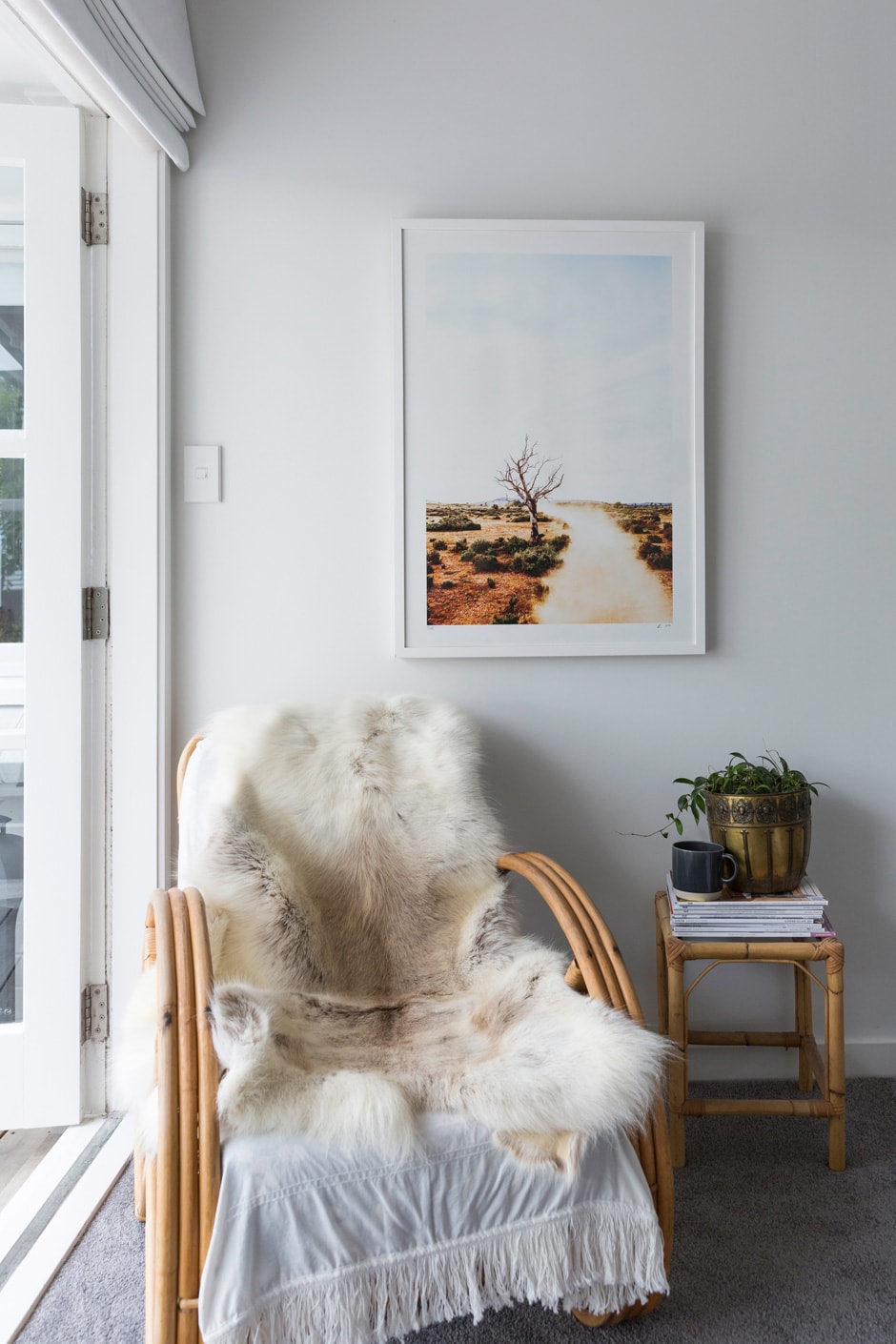 TOP Emmarose found the kantha quilt on her bed in Jaipur, on a trip for her 21st birthday. The Peacock headboard is from The Family Love Tree, and the artwork is by family friend Nick Herd. ABOVE Opening onto the back garden, the fourth bedroom has become a relaxation zone. The cane chair from Rummage, with hide from Nord, is the perfect partner for Jo’s heirloom side table. The photographic print is by Kara Rosenlund.

Finally, in phase three, they sanded and stained the original rimu floors a dark mahogany, created an outdoor entertaining area with a gas fire and low-maintenance native/tropical garden, redid that pesky kitchen, and added a second storey. This retreat-like upstairs master suite includes an ensuite, a walk-in wardrobe, an office nook, and a deck to capture the amazing harbour view, with Rangitoto so close you can almost touch it. 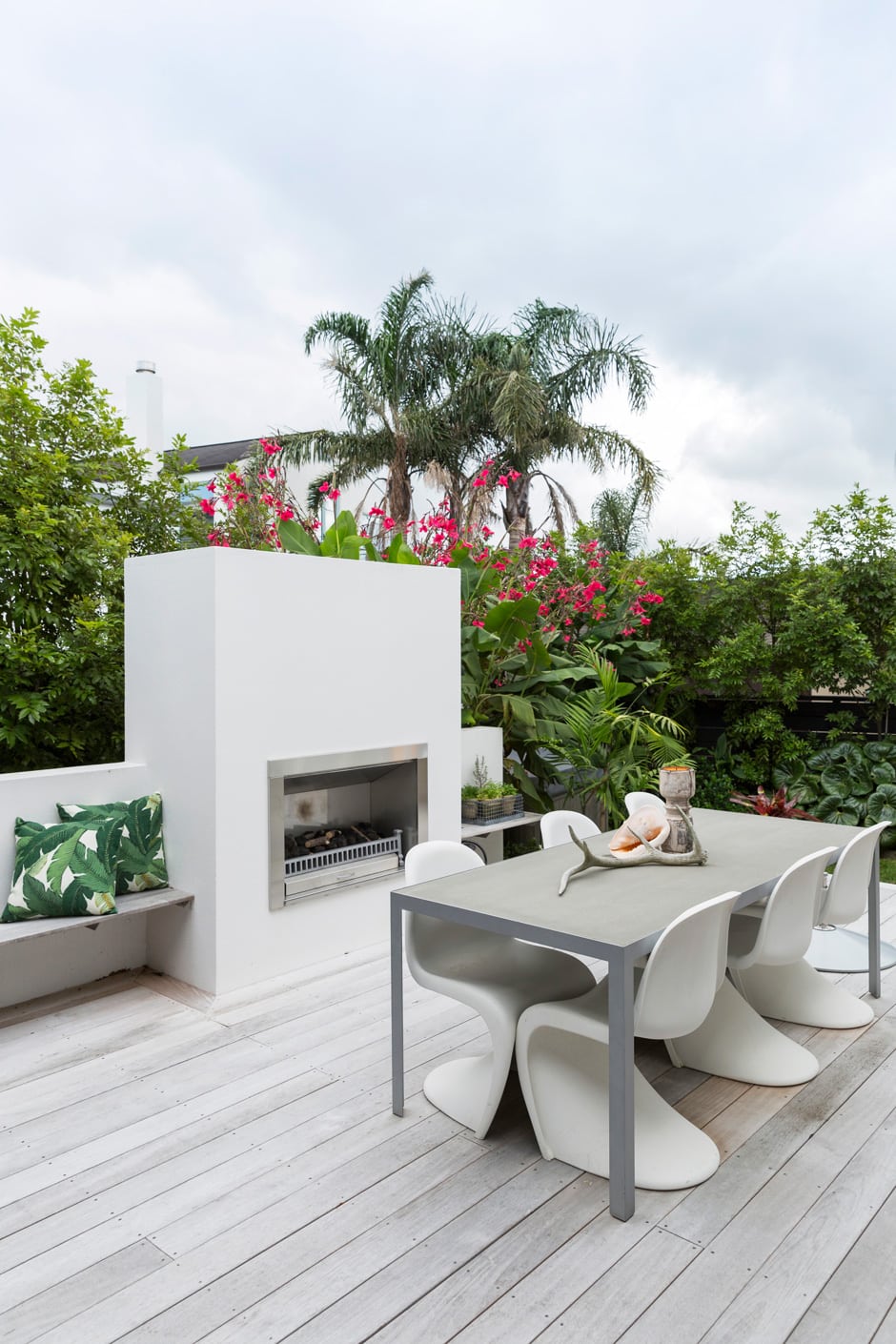 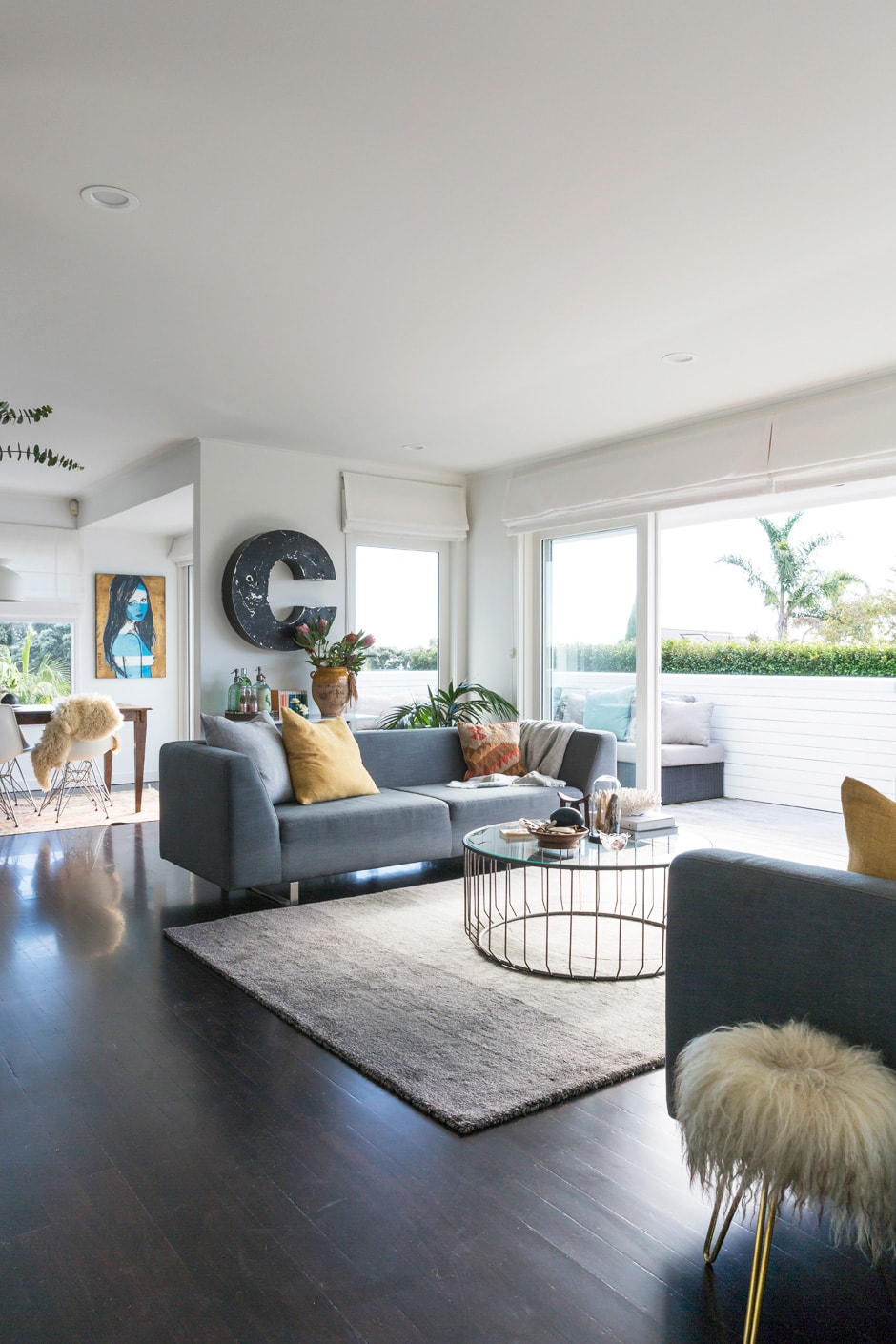 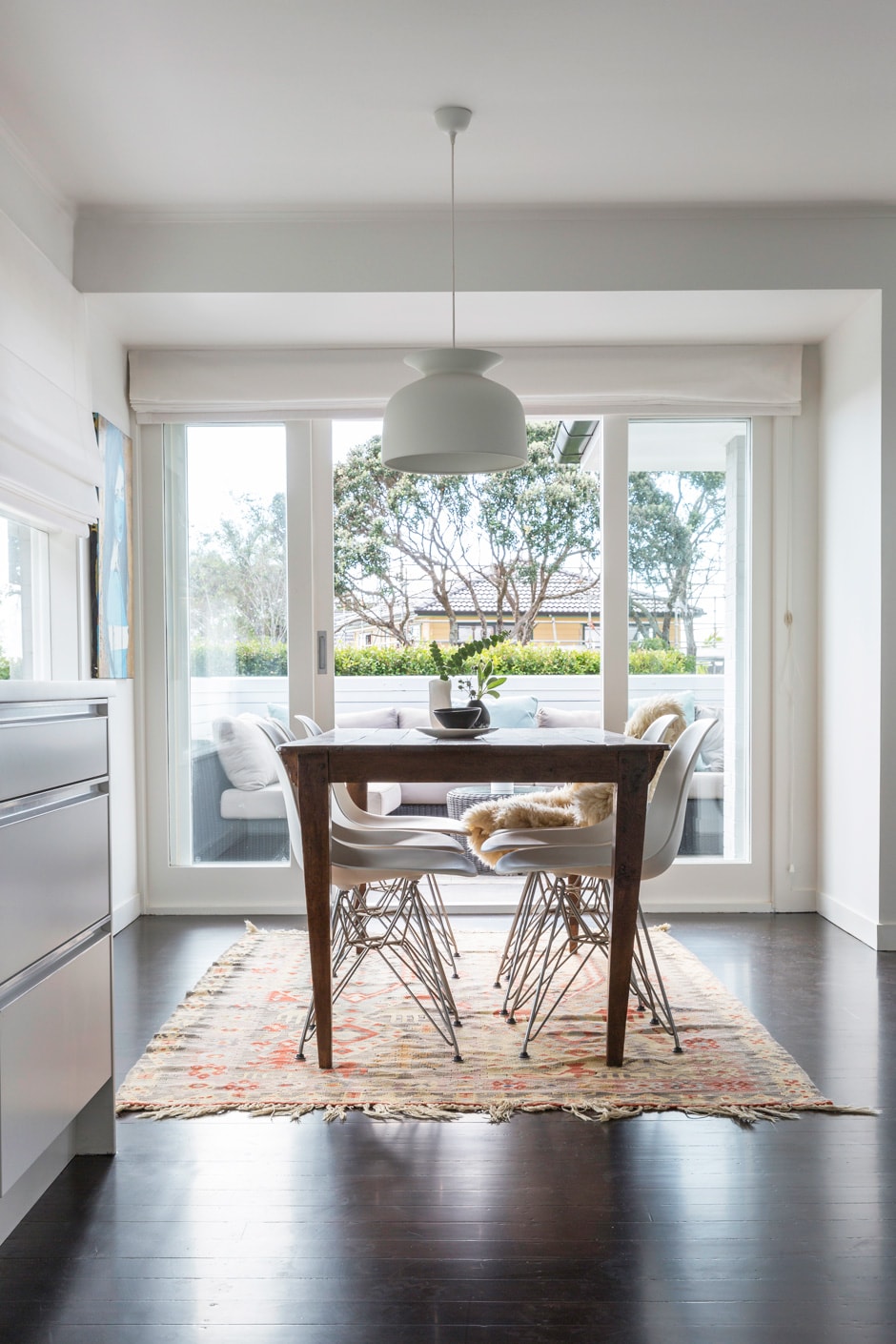 TOP In summer, the family “lives” outside on the back deck around the table by Bob McDonald from Simon James Design, with Panton chairs from Matisse. “We love casual Friday drinks and takeout with friends, or  Sunday afternoon barbies,” says Jo. “Family get-togethers are also very special. If the kids are in Auckland, Sunday night dinner is mandatory. Bring your partner or your friends, but be here!” MIDDLE Maximising the light in the lounge necessitated the purchase of robust furnishings. The graduated tones of the Horizons rug by The Rug Collection Australia make colour fade less obvious and the BoConcept sofas have been reupholstered in outdoor fabric from Madder & Rouge. ABOVE The dining room includes a Ronde pendant light by Gubi from Cult, a table from The Vitrine and Eames chairs from Matisse.

As far as Jo’s concerned, good things do take time. “I’m not into fast homeware at all. I like things with a bit of a story, a bit of history.” She regularly tries to cull her collections because, actually, she doesn’t like clutter, and the result is an expert balance that feels just right.
“In winter I have more stuff around, but in summer I like to pare it back a bit,” she says. “It’s about personal touches. My kids are an influence; I bought our little brass anchor because of Matt, who’s a sailor. I’m very sentimental, and I suppose that’s why old things speak to me. Give me something rusty and a little bit dusty – I don’t like perfect.”
She says she got emotional about the classic metal balustrade at the front entry. “We could have bought a shiny new one, but I thought, ‘No, this is the house. It’s served this house well since 1960.’ So we just painted it.” 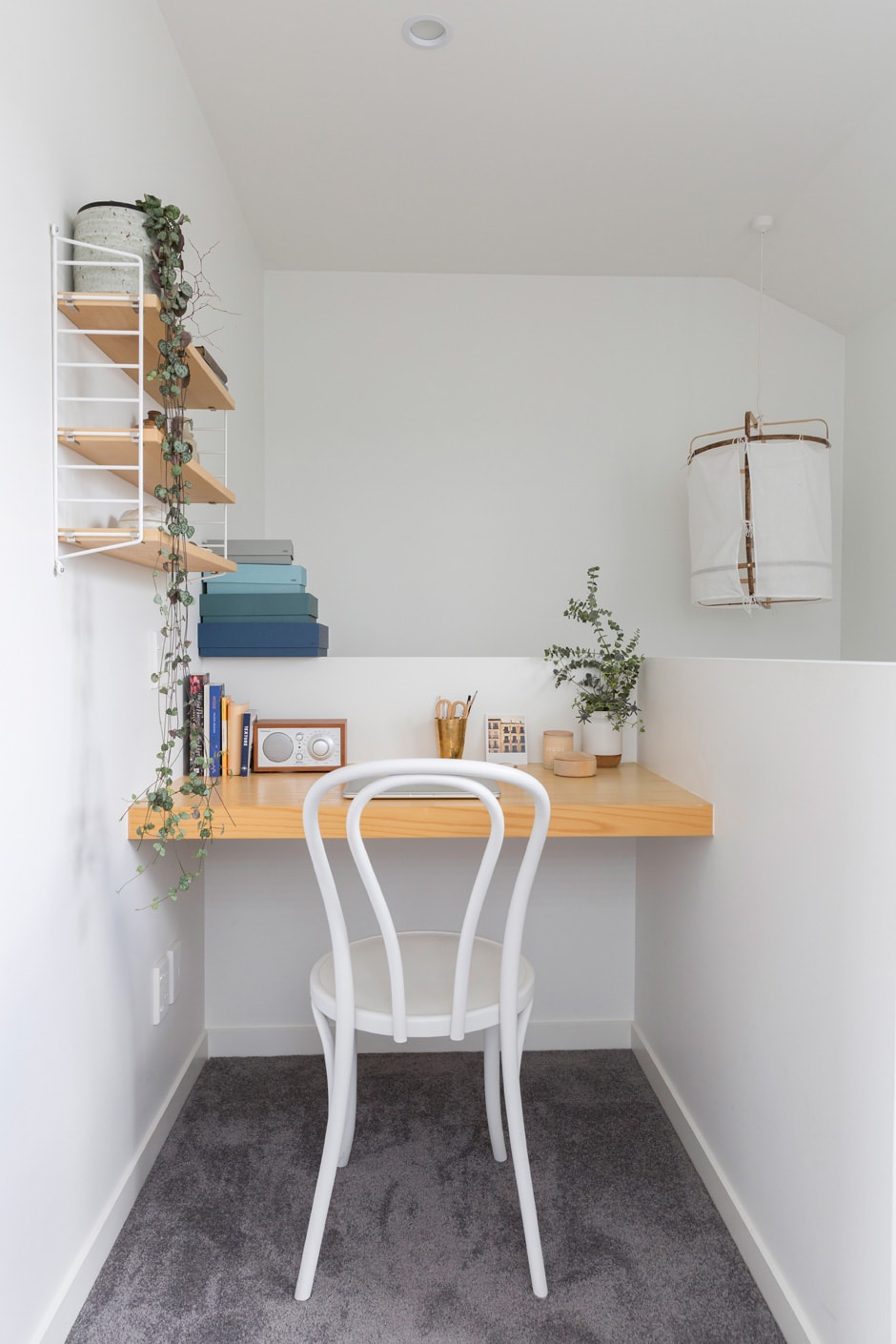 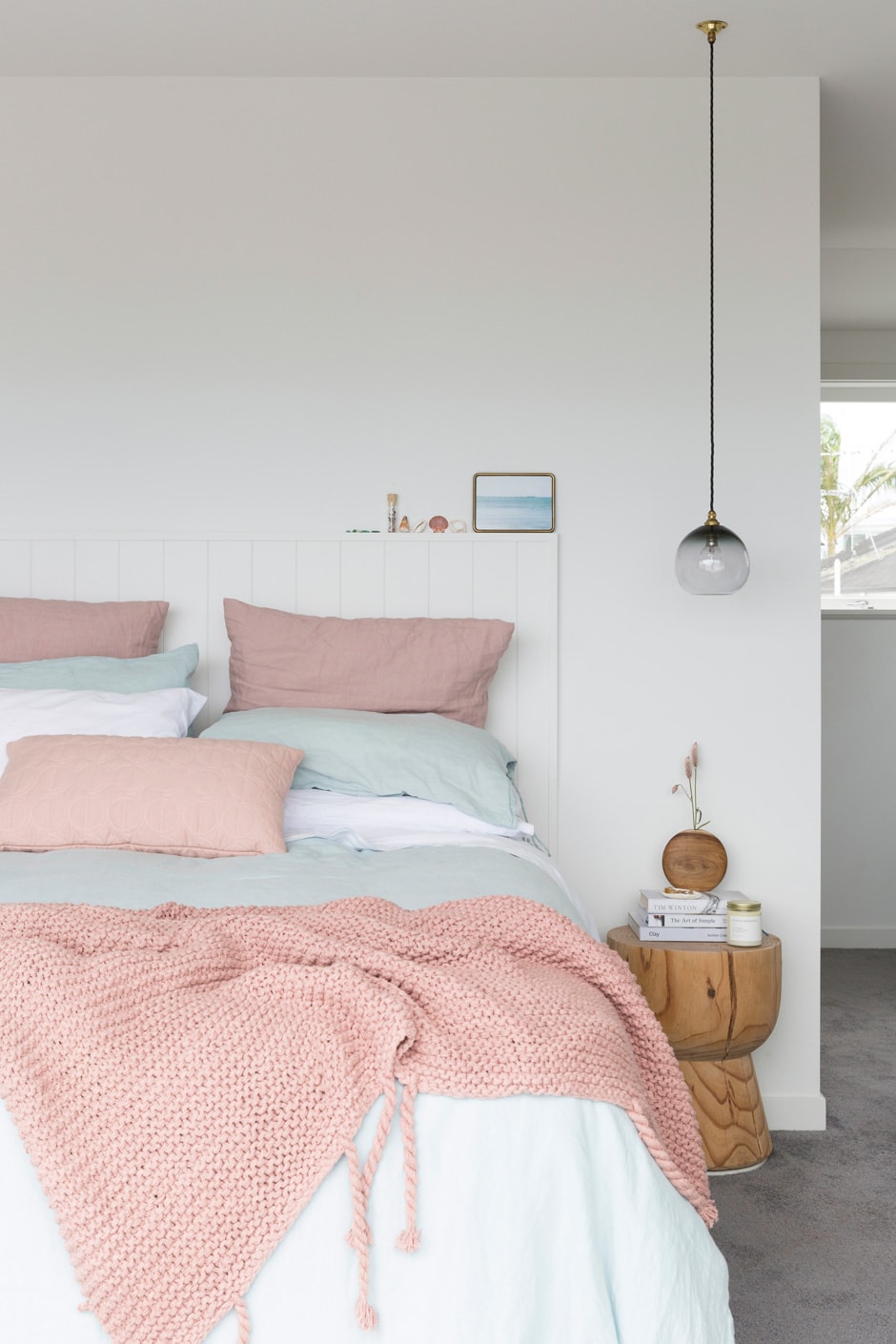 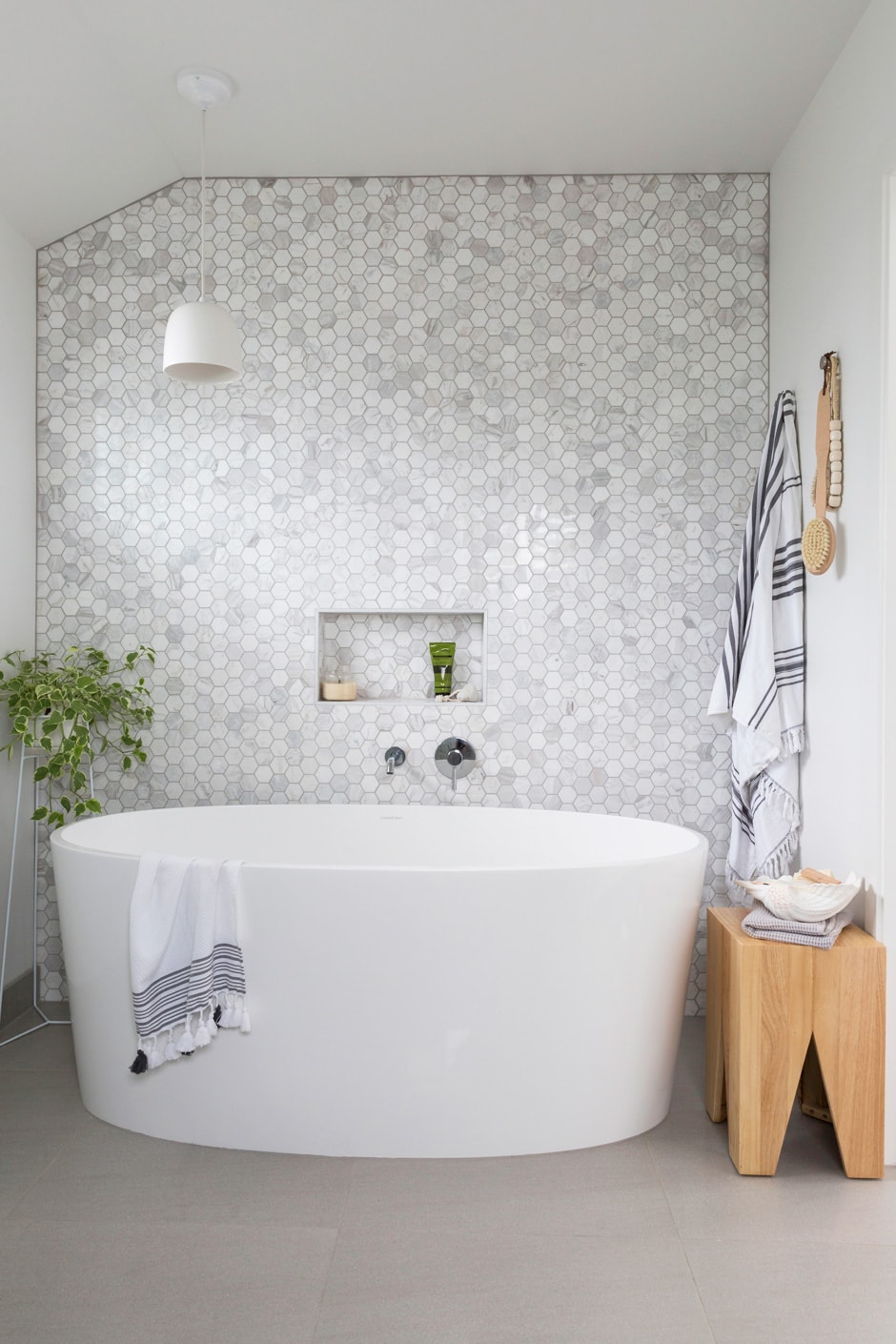 ABOVE Complete with a study (top), the new second storey is a serene sanctuary; Jo says she could happily spend all day in it. For her, white walls are crucial for enhancing the sense of calm. “They allow me to add furnishings, artwork and accessories in any colour. The things I bring in have personality, so I let them speak.” Seen above, bed linen by The Foxes Den is teamed with a cushion from Città, a throw by Madam Stoltz from Superette, pendant lights by Monmouth Glass Studio from Tessuti, a vase by Walk in the Park and an Eggcup side table by Mark Tuckey. With a marble vanity to match the bathrooms downstairs, floor-to-ceiling Carrara marble-look hexagon tiles from Tile Space and a deep free-standing Victoria Albert bath from Robertson, this luxurious ensuite has the feel of a high-end hotel. Other chic details include a pendant light by Home Industry and a Peg stool from Freedom.

Eight years and counting, the family looks set to continue collecting memories here. “This is a little house with a big heart – I’ve had a thing for it from the beginning,” says Jo. “It’s a modest house, you know? It’s not flash, because I’m not flash. I just made it a bit grander.”