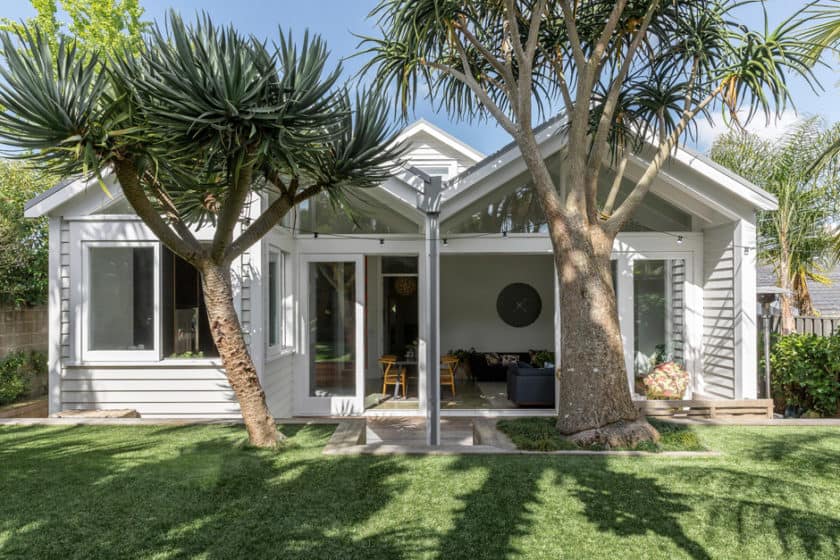 A couple with the great good fortune to find a home across the street from family discovers their ’hood is where the heart is.

In a world in which we’re constantly tapped into online networks, the ability to connect to a real live community has become strangely elusive for many. Not so for Aucklanders and parents of three Kate and Wayne Ashford, who created an insta-village when they bought a home across the road from Kate’s sister Sarah Vile and brother Dan Gosling and their families.
With 10 cousins and their various school friends living in the neighbourhood, “the house seems to attract a lot of children and noise” – and they couldn’t love it more. “It really is quite special,” says Kate. “There’s constant action in the street. I love that the kids all feel at home at all of our houses. Five of them walk to school together in a big gang. And an added bonus is that my sister’s teenage boys can babysit.” 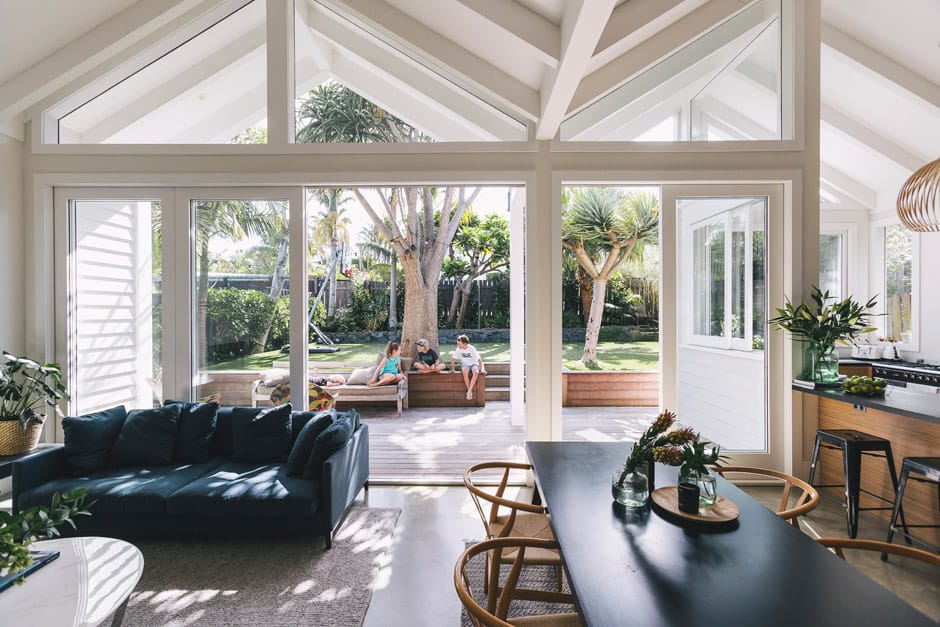 EXTERIOR Out the back, tall established Aloe bainesii trees are surrounded by a faux lawn, a choice Kate says was one of the best decisions they made, given the kids “live outside” whatever the weather. KITCHEN “Indoor-outdoor flow and lots of light were important to us,” says Kate. “The L-shaped kitchen works so well in terms of that.” Connected to and pushed out onto the deck, it also cleverly screens the home from the neighbours. Birch and plywood Octo pendant lights by Seppo Koho for Secto Design are positioned over the island. LIVING “We had fun with the add-on,” says Kate. “The main concept of the design was to respect the heritage of the home, but we wanted to make a statement. It was important to tie the old in with the new, which is where the high ceilings came from, but the double-gable roof is quite different from other renovations in the area.” Pictured here, from left, are Jude, Frankie, cousin Jamie Vile and Charlie.

In the final stages of renovating their previous property, the Ashfords weren’t exactly looking to move, but as luck would have it, the Herne Bay bungalow went up for sale. Curiosity the motivating factor, they went to the open home to have a nosey, and “instantly fell in love. We put in an offer and it was accepted, so we had to madly finish our old house to get it on the market.”
Viewing it through their love goggles, Kate and Wayne had happily taken the bungalow’s rough with the smooth. “The house had great bones, but there was a terrible lean-to at the back,” says Kate. “We called it the bach – it was pretty simple. The toilet was an outhouse.” So, three years after moving in, they relocated to a rental around the corner and an overhaul began.
What luck having a builder for a husband. Not only had Wayne worked on similar renovations in the area, but he also already had a close relationship with their chosen architect, Jack McKinney of McKinney & Windeatt, their mutual respect fostering an environment in which they could work quickly together to solve problems for a highly efficient build. Kate says she and Wayne had an absolute blast. “The high point of the renovation was working with my husband. We both really enjoyed the process – I didn’t want it to end. I’d love to renovate another house, but the kids are adamant we’re not moving.” 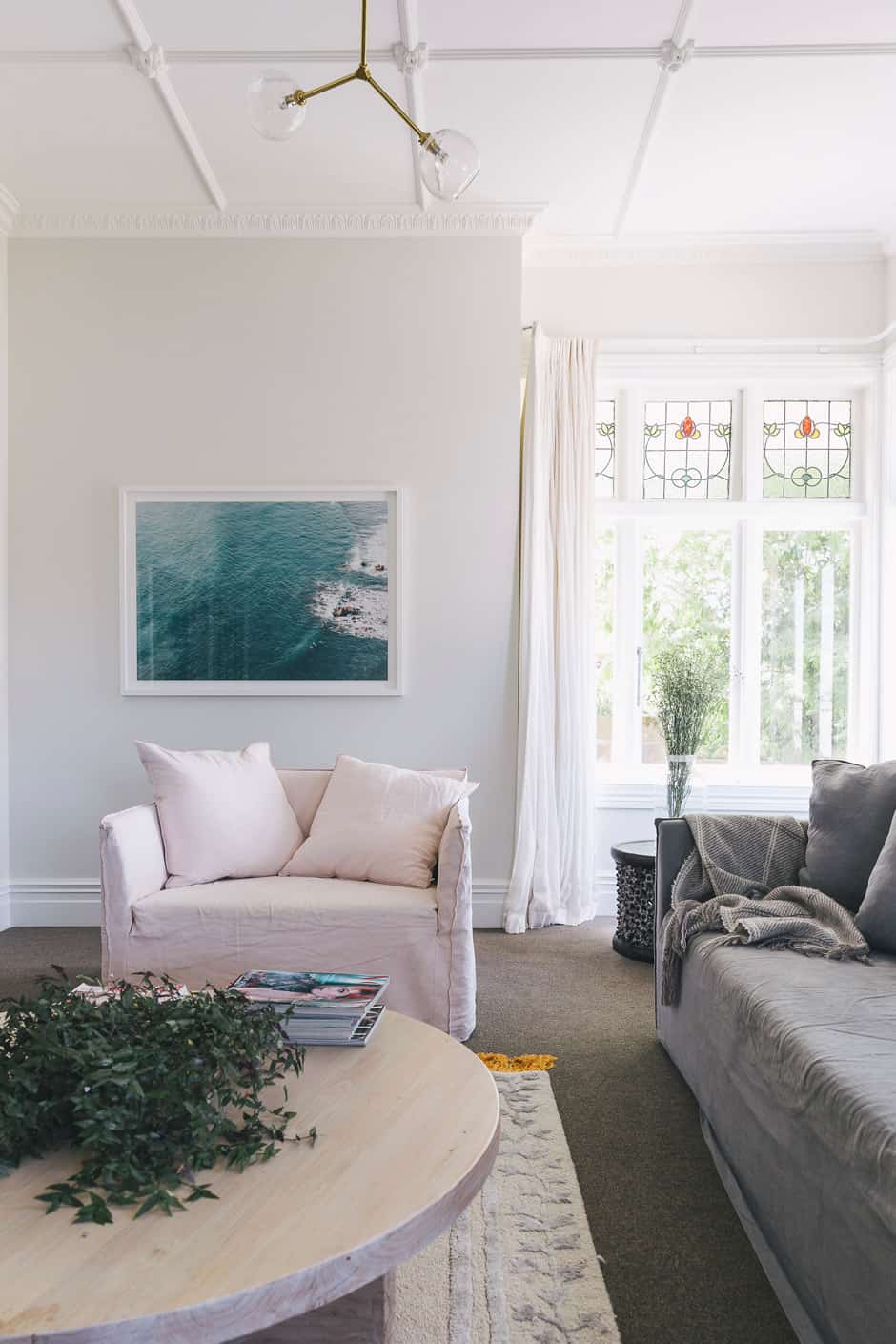 TV ROOM An artwork by Josh Griggs sets a restful tone in the family room, which is part of the original bungalow and features a chair, sofa and coffee table from St Clements. The lighting includes a
Y chandelier from Douglas and Bec and an Arco lamp by Achille & Pier Giacomo Castiglioni for Flos.

While retaining the elements that defined the bungalow’s character, the team began an exciting reinvention. “We made sure we reinstated the ceiling roses and cornices, and restored the beautiful stained glass windows, but we wanted to create a family home with different zones for children and adults.
We have the kids’ area upstairs, a separate TV/family room and then the main living room. There’s also a table-tennis table and couches in the garage for when there’s an overflow of kids, which is quite often.” 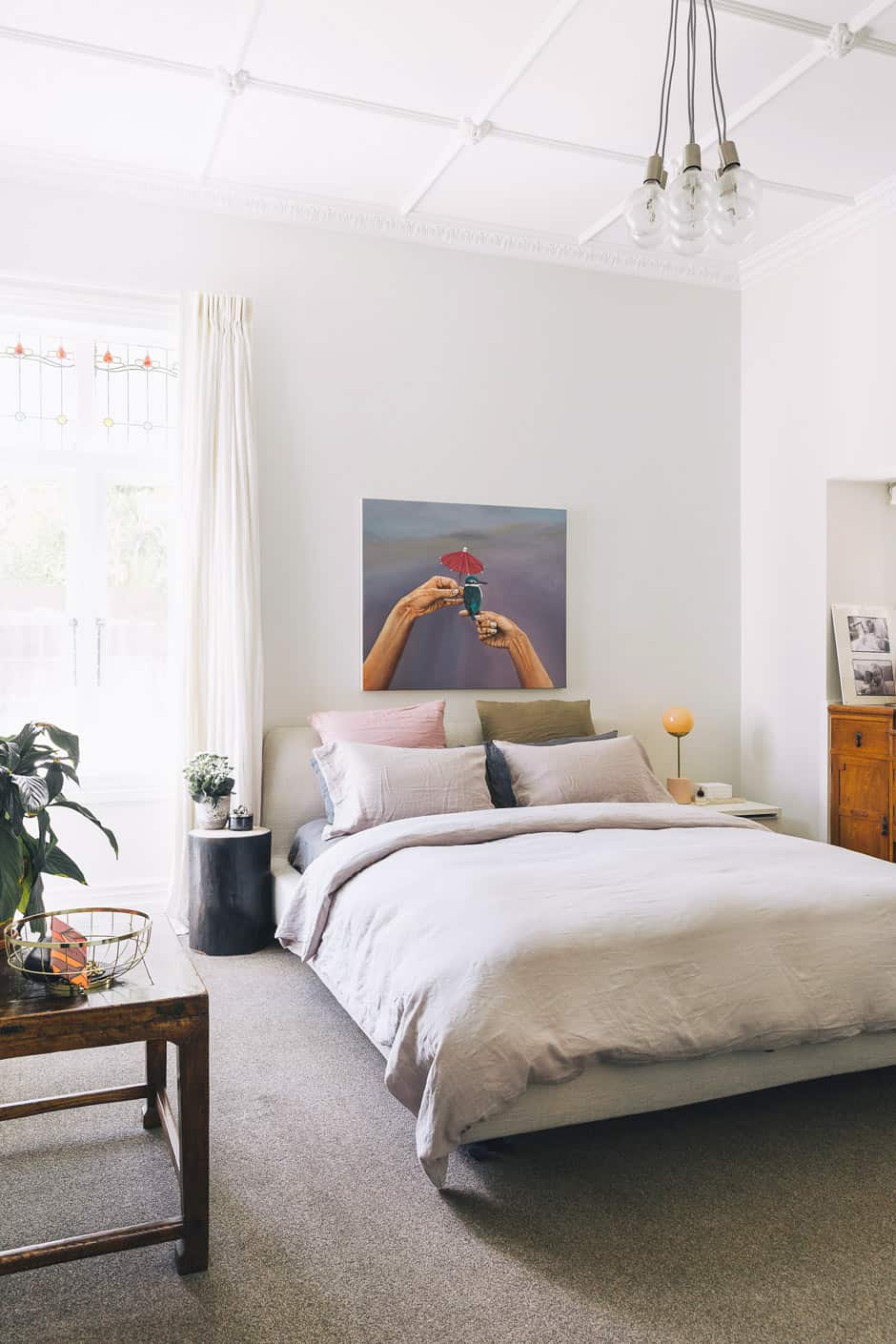 MASTER BEDROOM The couple’s private space sees a Tonk stool by Charles Hinckfuss, bed linen from Nest and Città, and a Line table lamp by Douglas and Bec combined with pre-loved timber pieces, including a favourite “hand-me-down” table from Kate’s parents.

Although they stuck with the classic pitched-roof aesthetic, the renovation has wholly modernised the mood. The formerly closed far end of the house, with its pokey lean-to kitchen, was altered to become a light-filled open-plan living space by folding down the beamed ceilings to create an intriguing M-shaped, double-gable roof. Sliding doors stretch the width of this area and connect with a covered kwila deck that steps up to a garden with established trees and a lawn kept play-ready for the kids year-round thanks to the addition of artificial grass.
The house was also extended up into the attic, where a gabled space became two children’s bedrooms with a shared bathroom. All three of the kids’ rooms are big enough to double as play zones, so the family areas downstairs can be kept clear of the ever-expanding Lego collections.
Concrete floors and a striking ebony-coloured kitchen in the extension are among the pleasing contrasts to the home’s traditional elements. Kate says she’s found the black galley kitchen to be easy care: the slate benchtops are indestructible, and it’s only sticky little fingerprints on the cabinets that have to be kept on top of. Floor-to-ceiling cabinetry provides loads of storage, and wraps around to form an office nook in which the kids can perch to do their homework while tea’s being cooked. 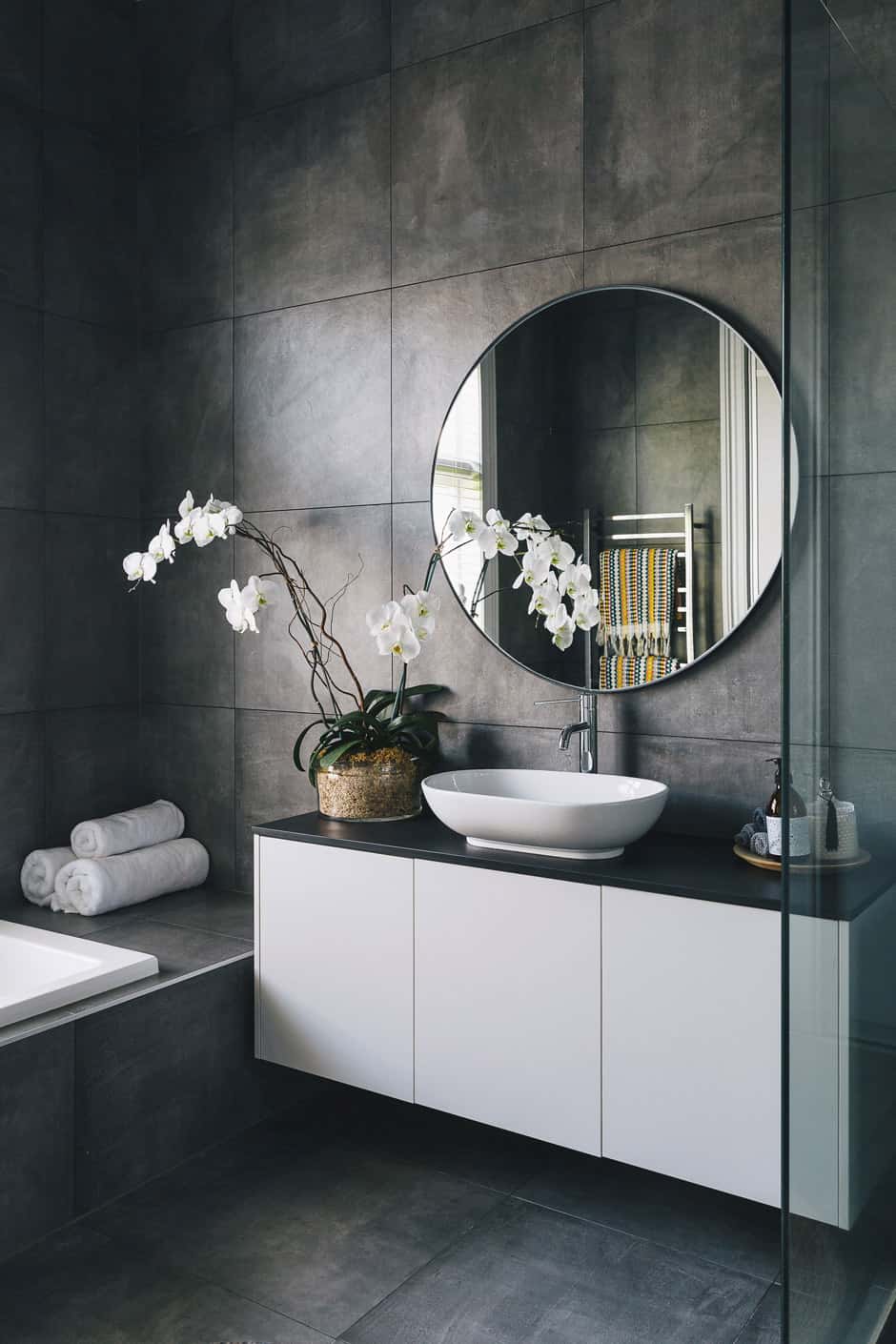 MAIN BATHROOM Here Kate says they were going for a dramatic, luxurious feel, “but it needed to be family friendly, which is why we decided to box in the bath, to make it easier to sit around and chat when the kids are in it.” The potted orchid is from local store Sills & Co and the towels are by Mayde from Tessuti, which is also just up the road.

Although mindful of the need for robust pieces suitable for her boisterous bunch, Kate has invested in quality homeware from local brands such as St Clements, Simon James Design and Douglas and Bec. “As we were beginning the renovation, a friend told me, ‘Buy something fabulous now, because when you’re ready to furnish you’ll have run out of money.’ I took this advice with the pendant lights in the kitchen, which I just had to have.
“This has become such a great home for our family,” she says. “The kids wander back and forth; there’s always someone to play with in the weekend. And us adults enjoy that there’s always somebody not too far away to enjoy a glass of wine with!” 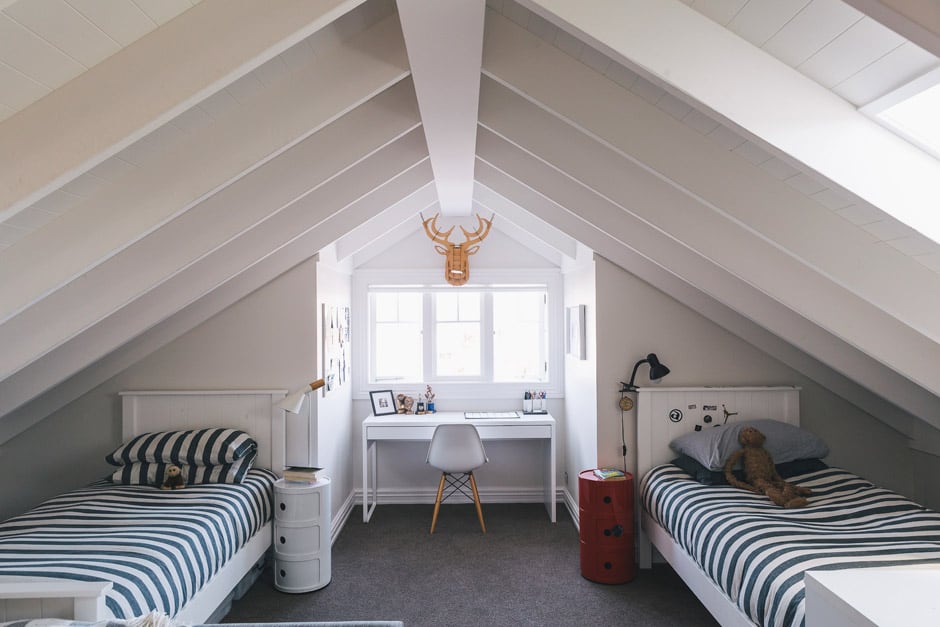 ATTIC “The attic is the kids’ haven,” says Kate. “Frankie has a queen bed in her room [right], but she and Charlie like to sleep in his room [above]. I often hear them chatting away after I’ve said goodnight.” The kitset stag head above the window is from Nood; it was Charlie’s one décor request.