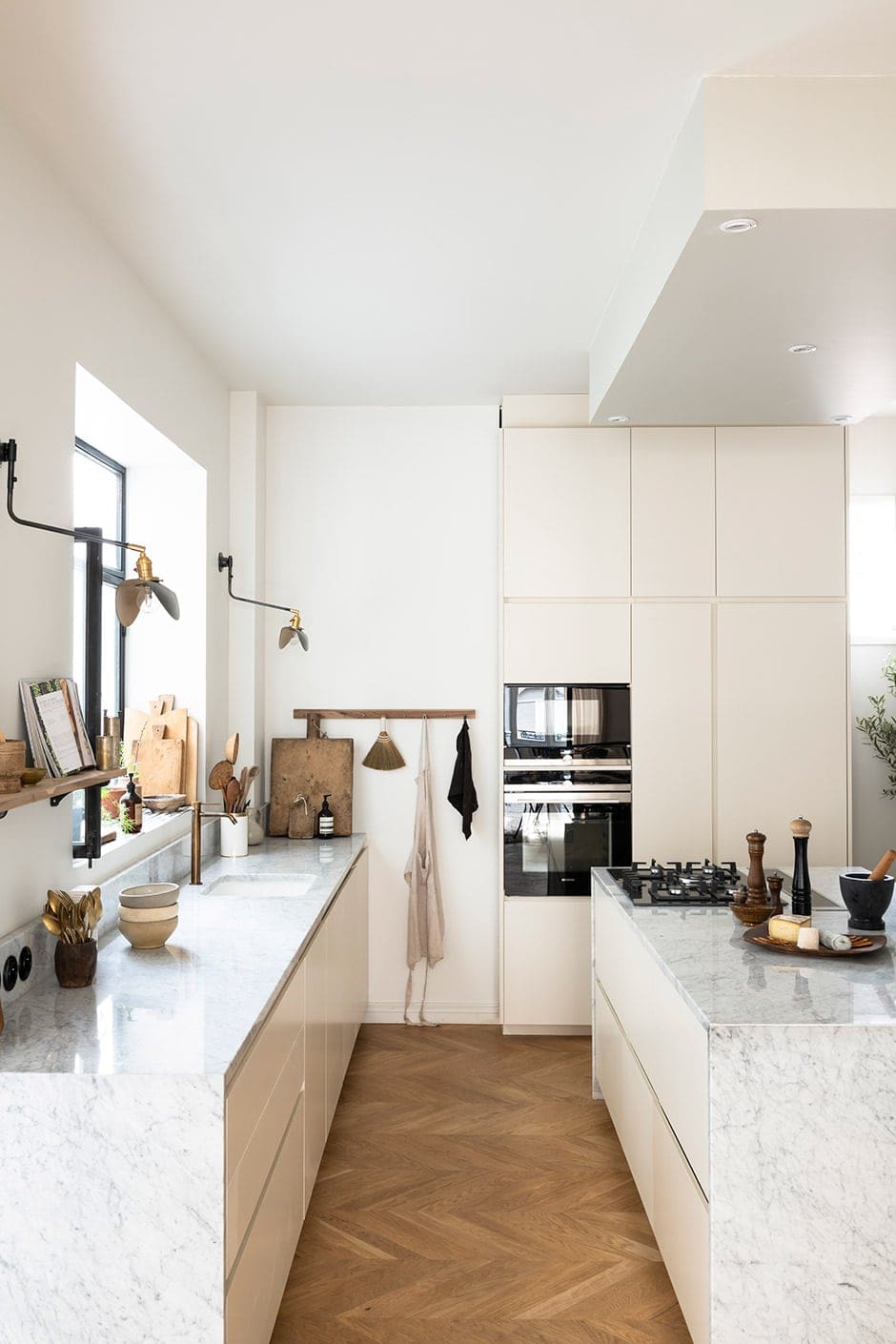 The interior designer’s deft touch and eye for vintage finds has imbued this home with intrigue and history.

French interior designer Delly Marton was given carte blanche to renovate this apartment in the centre of Bordeaux, France. The white tiling and roughcast now done away with, the interior emanates an elegant and refined ambience, from the hammam down in the basement right up to the roof terrace.

Located just a few steps from Bordeaux Cathedral, the home’s calm atmosphere makes it difficult to imagine the state it was in before. “The house was habitable but had absolutely no charm to it,” says Delly (pictured opposite). “There were white tiles on the floor and plaster on the walls — it was very ordinary. We [barely kept] any of it. Even the chimneys were removed.”
To bring character back to the 1900s dwelling, Delly sought out loads of vintage and second-hand items. She roamed the region for months, not hesitating to drive hundreds of kilometres to get her hands on an old staircase from a farm in Charente or a vintage radiator in Dordogne. In fact, 17 cast-iron radiators were located through various Leboncoin (similar to Trade Me) advertisements to replace the unattractive electric models that were previously installed in the house.

MAIN IMAGE The natty wall lamps over the kitchen bench are by Wo & Wé and the appliances are by Siemens. ABOVE Highlights in the living area include the new parquet flooring and built-in shelves. The sofa (reupholstered with old bed linen), coffee table and armchairs were all second-hand finds. The Quinconces fleamarket was a regular haunt for unique objects, and the sideboard comes from a market in Saint-Michel. On the right wall, a black canvas creates a chic backdrop for arrangements of dried flowers.

In contrast, the parquet flooring and cement tiles were bought new; the oak floorboards in the living room, laid Hungarian point-style, were found at a Belgian sawmill and many of the tiles were made to measure in Morocco. Cornices and skirting boards crafted by a carpenter were added to make the living room look more Haussmannian, while the stairwell’s plastering was removed to expose the stonework; in too bad a condition to be preserved, the stone steps were then replaced with timber. 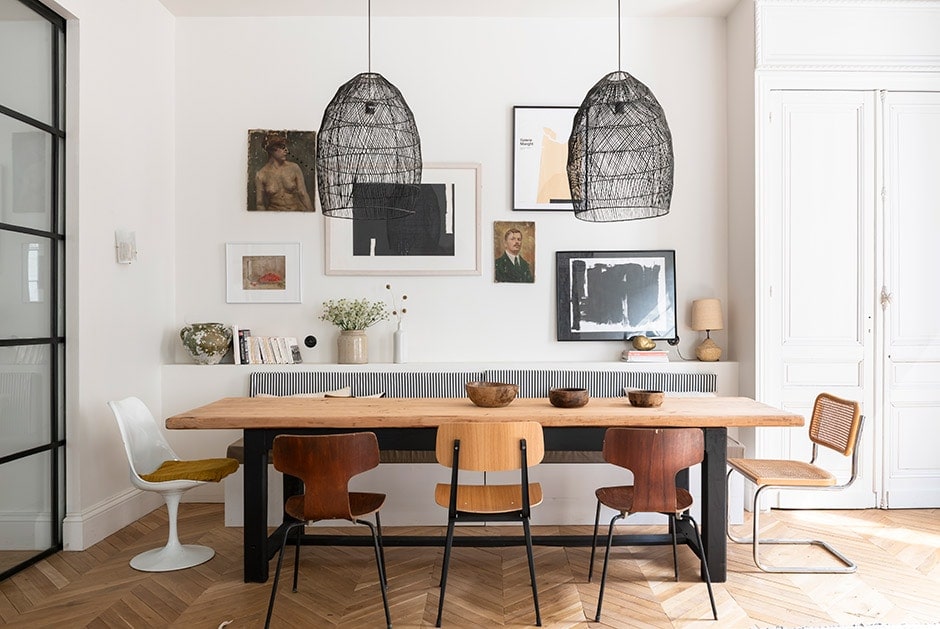 ABOVE Beneath pendant lights bought in Morocco, the dining area revolves around a second-hand table and an assortment of mid-century chairs by designers including Marcel Breuer, Arne Jacobsen, Friso Kramer and Eero Saarinen. The kitchen is accessed from this space through sliding glass doors made from second-hand panels welded by a local locksmith.

Delly has maximised every inch of the apartment’s 220m2 spread over five levels, from the ground up. The former cellar was transformed into a small hammam (Turkish bath) and home cinema, while on the ground floor, the study has a view through a repurposed window into a restful library. On the light-filled first floor is a kitchen that connects to an open-plan living and dining space, and the second floor is home to three bedrooms, each with its own bathroom and dressing room. To top it all off, a staircase leads up to a lovely terrace overlooking the city’s roofs and the cathedral spire. 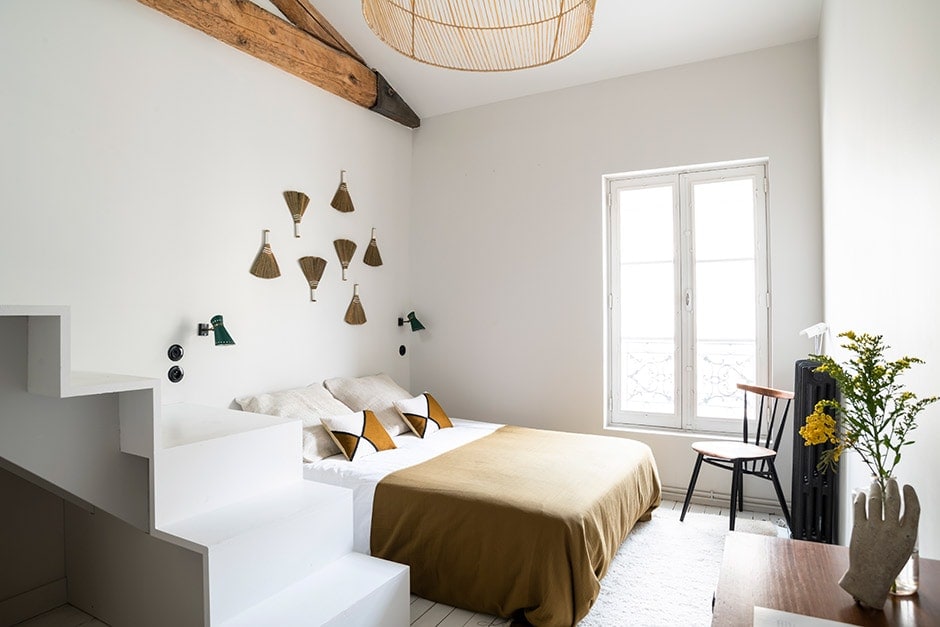 ABOVE Personality is brought into this bedroom via a quirky collection of old Chinese brushes hung artfully on the wall. On either side of them are more wall lights from the Selency fleamarket.

Delly teamed up with architect François Moreau to create this staircase, the most difficult part of the renovation. “We had to change our plans four times before being given planning permission — the whole process took 18 months,” she says. “Meanwhile, the house remained gutted for six months, preventing any other work from being done. It rained in the house… I bought 30 buckets in to collect all the rainwater. It was a real nightmare!”
An 11m-tall atrium capped with a glass roof links the home’s different levels and is decorated with 1960s Rotaflex pendant lights hung at different heights to enhance their sculptural silhouettes. “In the evening, the globes diffuse a beautiful light,” says Delly. 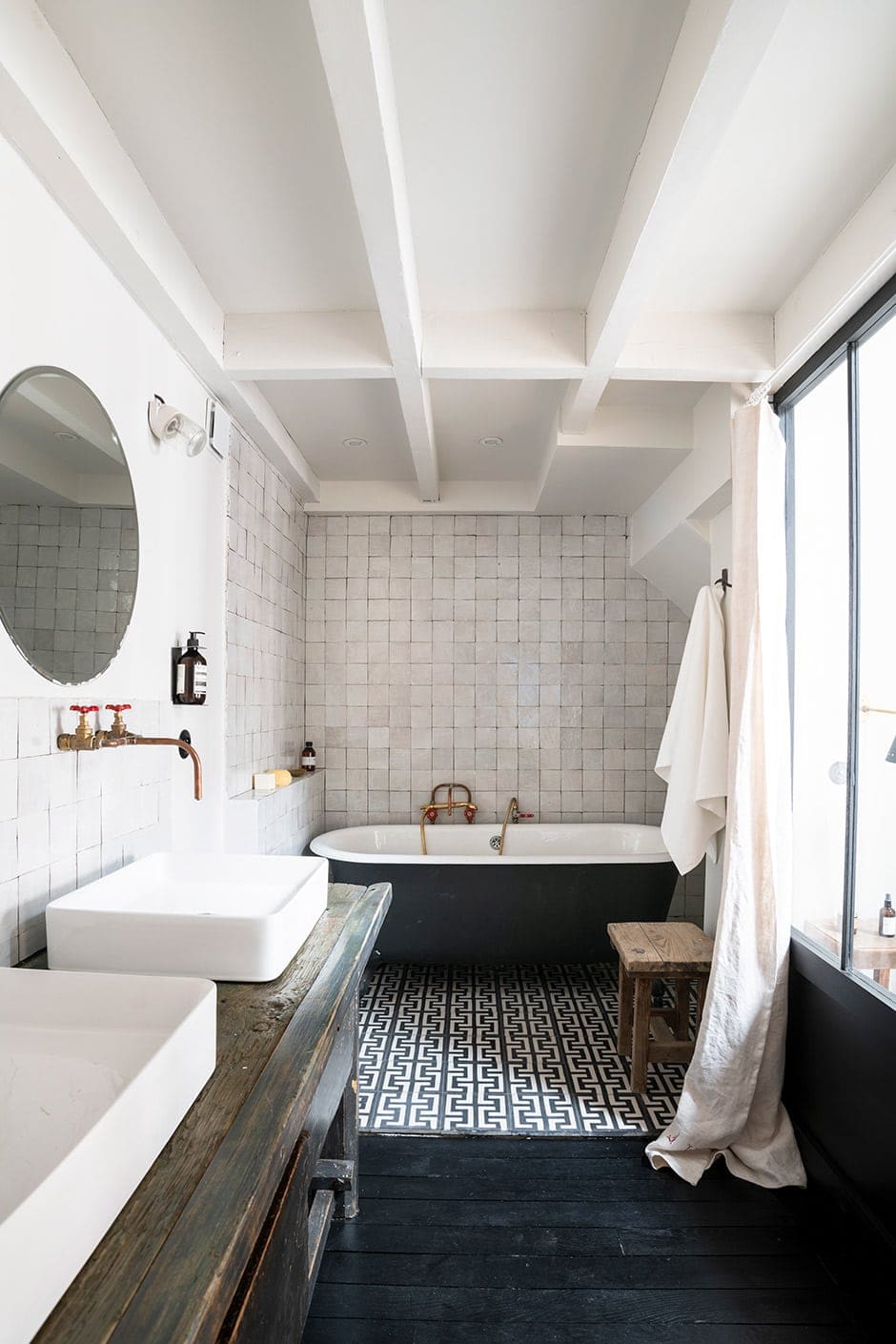 ABOVE Pale and zellige tiles from Morocco complement the painted wooden floors in the master bedroom’s bathroom. The vintage bath and mirror from a charity store look just right alongside the basins affixed to a piece of furniture found in Eastern Europe and tapware Delly designed herself.

They’re the most expensive homeware items in the house, which was renovated on a relatively limited budget. “One has to be creative when under financial constraints,” says Delly, who bought most of the furniture second-hand.
This didn’t bother her at all. “In my opinion, it doesn’t make any sense to buy new when bargaining is good for the wallet, the style and the environment,” she says. “Goods manufactured in the ’60s and ’70s [can be better quality] than goods produced today. We have everything to gain from buying second-hand.”
She also incorporated into her scheme some pretty objects from her travels, mainly to Marrakech and London, to further personalise the apartment. “Decoration is like fashion — the most important thing is contrast,” she says. “When wearing a short outfit, you have to compensate with something long, and it’s the same in terms of [interiors]. One mustn’t hesitate to combine sources, fabrics and styles.”