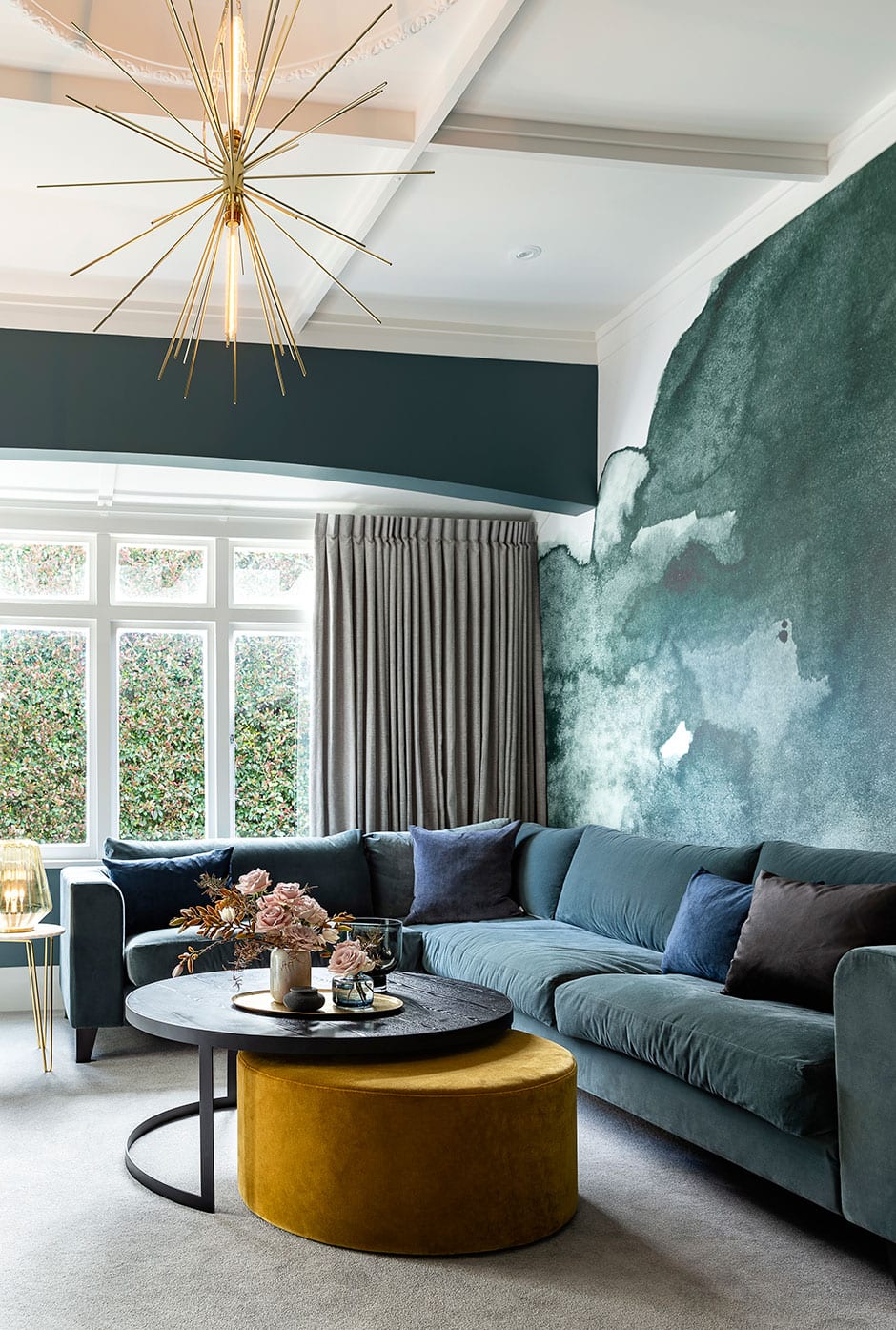 The beauty of this home is obvious the moment you set eyes on it, but the true magic’s in the detail.

It began with a tenacious pigeon, which lived with its clan in a grand Phoenix palm that dominated the driveway of this Mt Eden, Auckland home. The palm deposited great fanned fronds onto the cars below; the pigeons dropped gifts of their own. But it was the feisty bird that clung to Kate Lines’ windscreen as she flapped the wipers to and fro that was the final straw. The palm had to go. 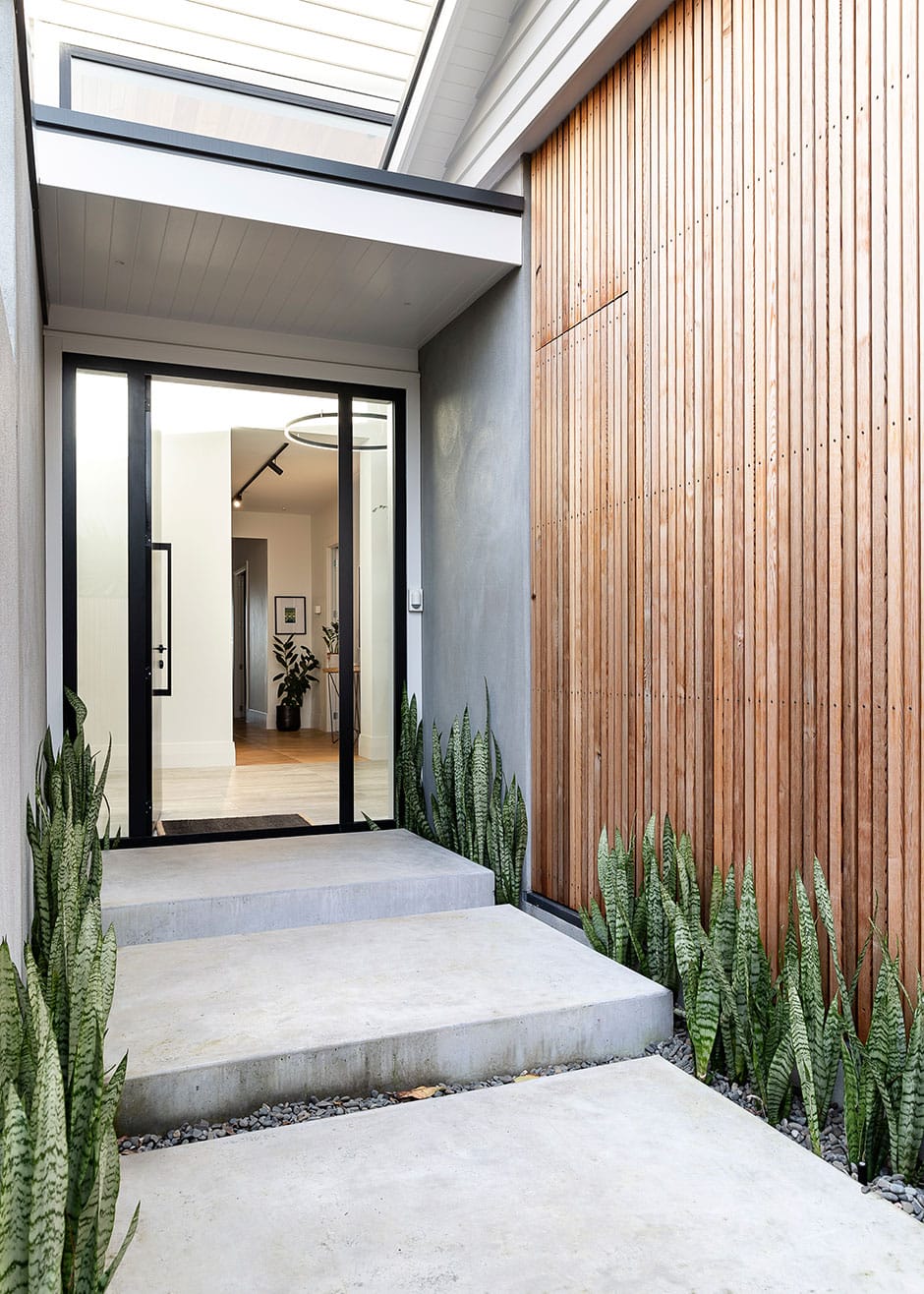 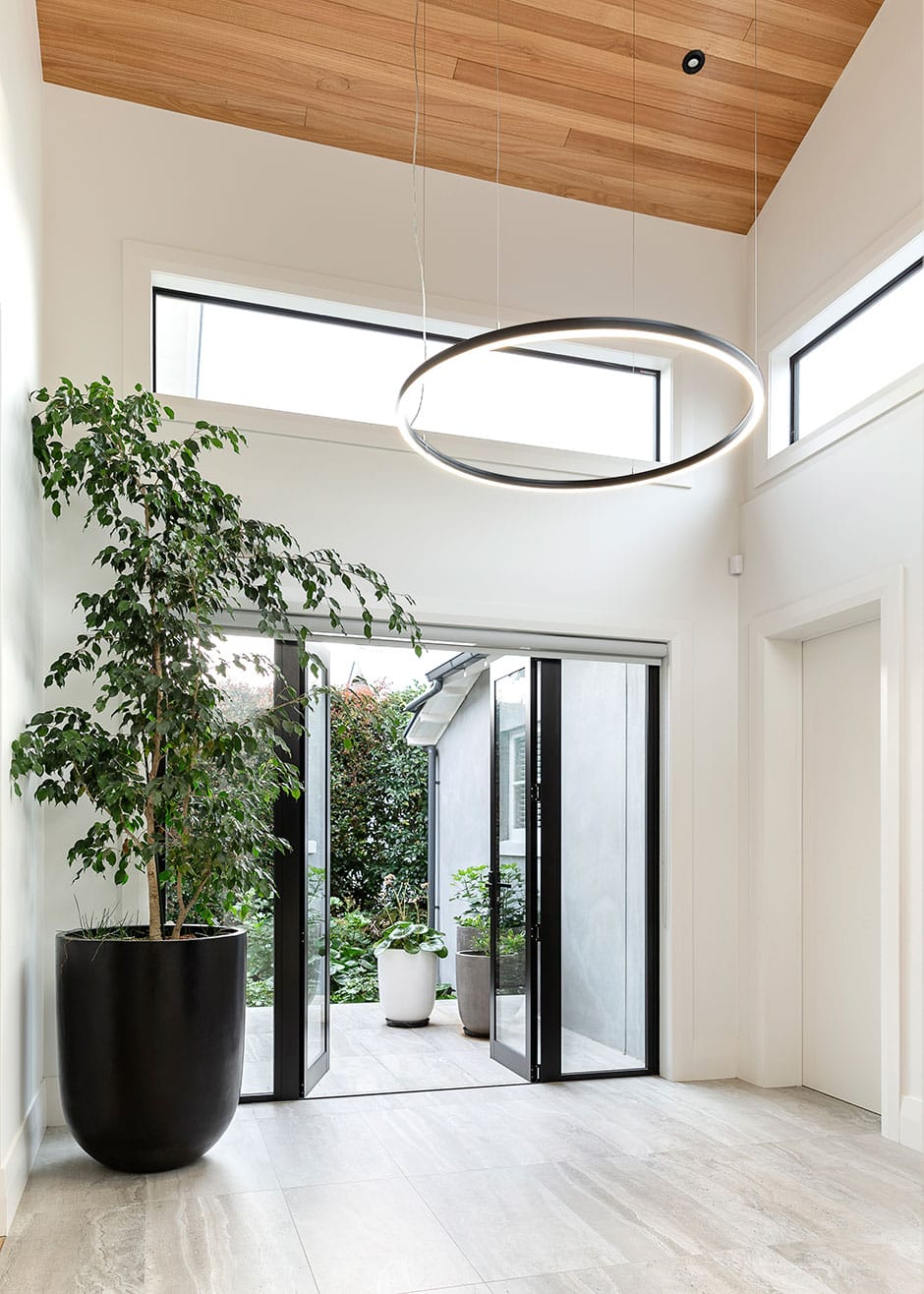 MAIN IMAGE The custom-designed sofa from Designers’ Collection (with cushions from BoConcept and Città) is central to Kate’s favourite ‘green room’. The coffee table and ottoman are from the same Parnell store; items on the table include a tray and stone and glass vases from Città filled with blooms from The Forager, a pot from An Astute Assembly and a large glass vase from BoConcept. The Elara XL pendant is from ECC and the table lamp is from A&C Homestore. ABOVE At the home’s entrance, steps lead past rows of mother-in-law’s tongue to an atrium that’s a gallery for a Moonring pendant from Light Plan.

“Ripping it out meant we could get trucks up the drive, so it was the catalyst to begin our renovation,” says Kate (pictured opposite). She, her husband Matt and their children Thomas, Joseph and Zoe had lived in the concrete bungalow for five years by then. Built in the 1920s, its stucco exterior was painted an inconsequential neutral, the terracotta-tile floors in the entry and bathroom were a worrying slip hazard for young kids, and its interior layout was the wrong way around — the passage from the front door looked straight at the laundry and the kitchen turned its back on the garden. But the home had bulletproof bones, enough space and a sense of happy history. 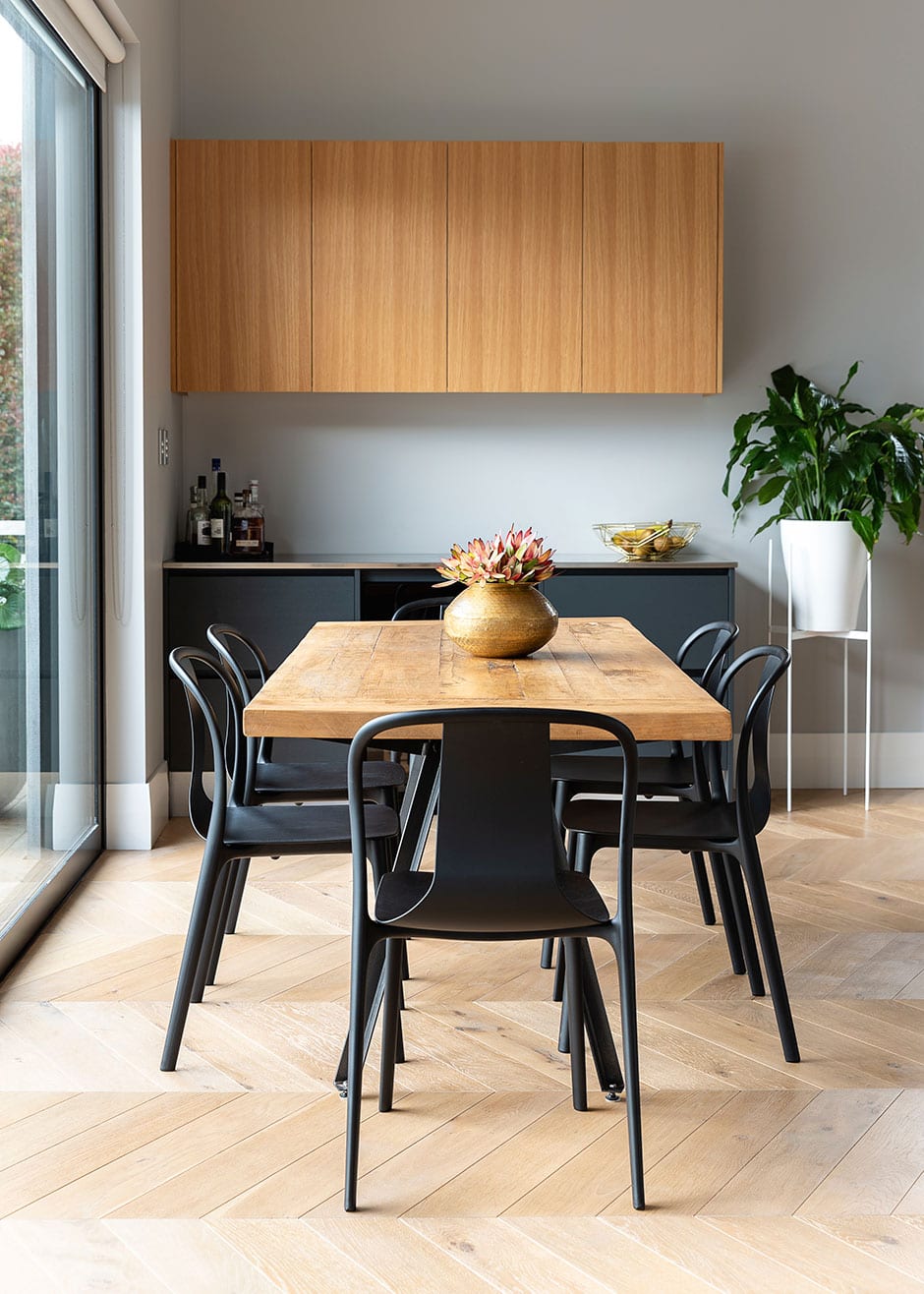 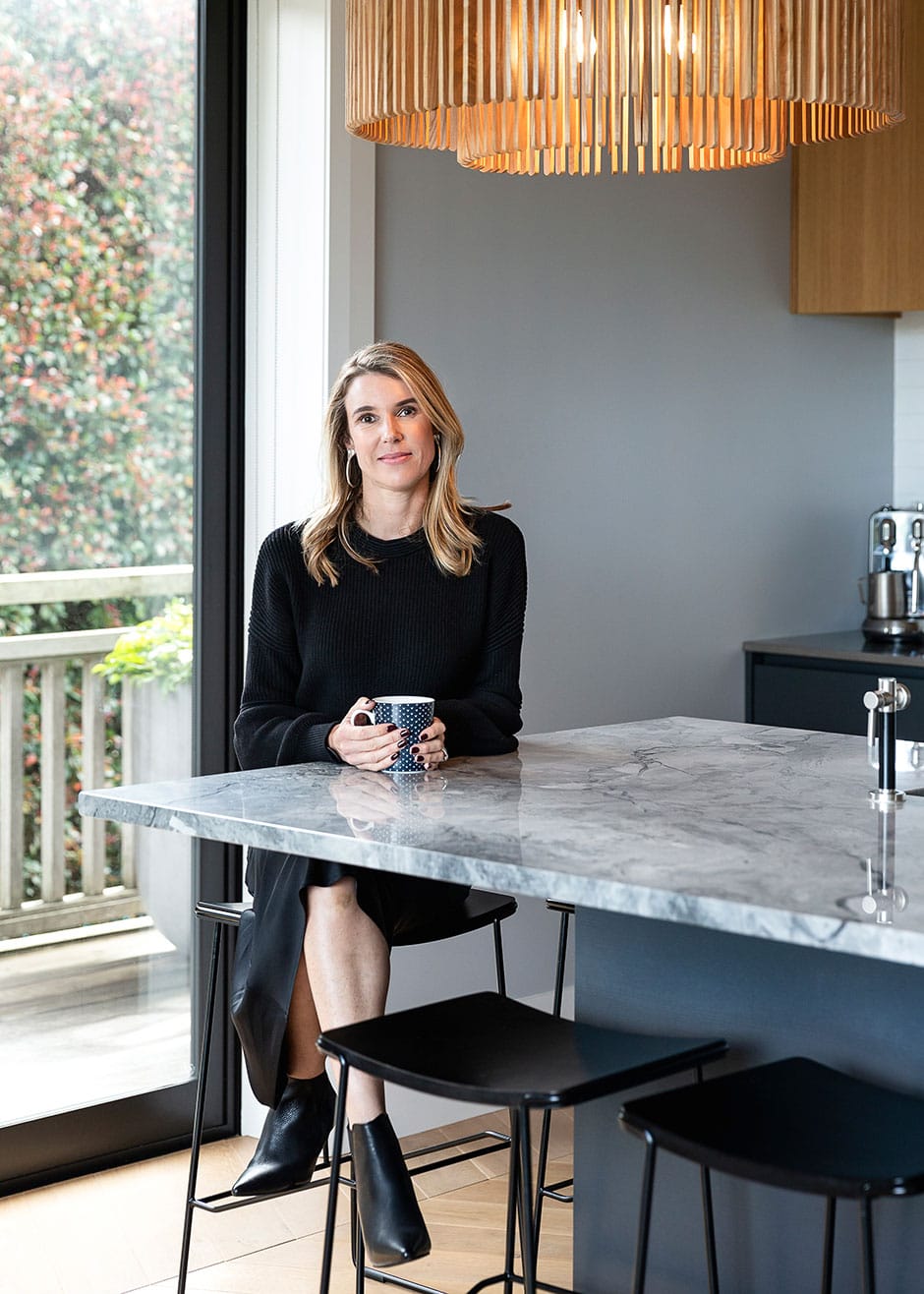 TOP The family’s existing dining table has joined forces with chairs from Città. ABOVE Kate at home.

Although the family weren’t doing it tough in the two-level 320m2 bungalow with its separate studio and backyard with a pool at its heart, the natural by-product of having an interior designer as your best friend is that you begin to dream of what could be. Kate and Nikki Willis of Two Creative Design spent many an evening over a glass or two pondering the washing machine that blocked the outlook to the outdoors.
Once the palm was gone, the Lines called in architect Jason Bailey and moved out for 10 months while the builders began the extensive work. Just about every internal wall was moved (not easy when you’re dealing with concrete); the kitchen was swivelled 180 degrees; the basement was replanned to accommodate the laundry, storage, wine cellar and spare bedroom; a pop-top main suite was added for Kate and Matt to retreat to; and the studio was incorporated into the house via a linking atrium/entrance hall. In all, the home grew by 100m2.

ABOVE “We wanted the kitchen to have a combination of matte and glossy finishes,“ says Nikki. The splashback tiles from Artedomus and island bench in Super White granite from AGB Stone bring a little luxury to the material palette that includes oak veneer and charcoal cabinetry by Carlielle Kitchens and a Balia chandelier from May Time.

With the structural changes complete, Nikki and her business partner Clara Rollinson put their plan into action. When they showed the mood boards to their clients, the reaction confirmed that they were all on the same page. 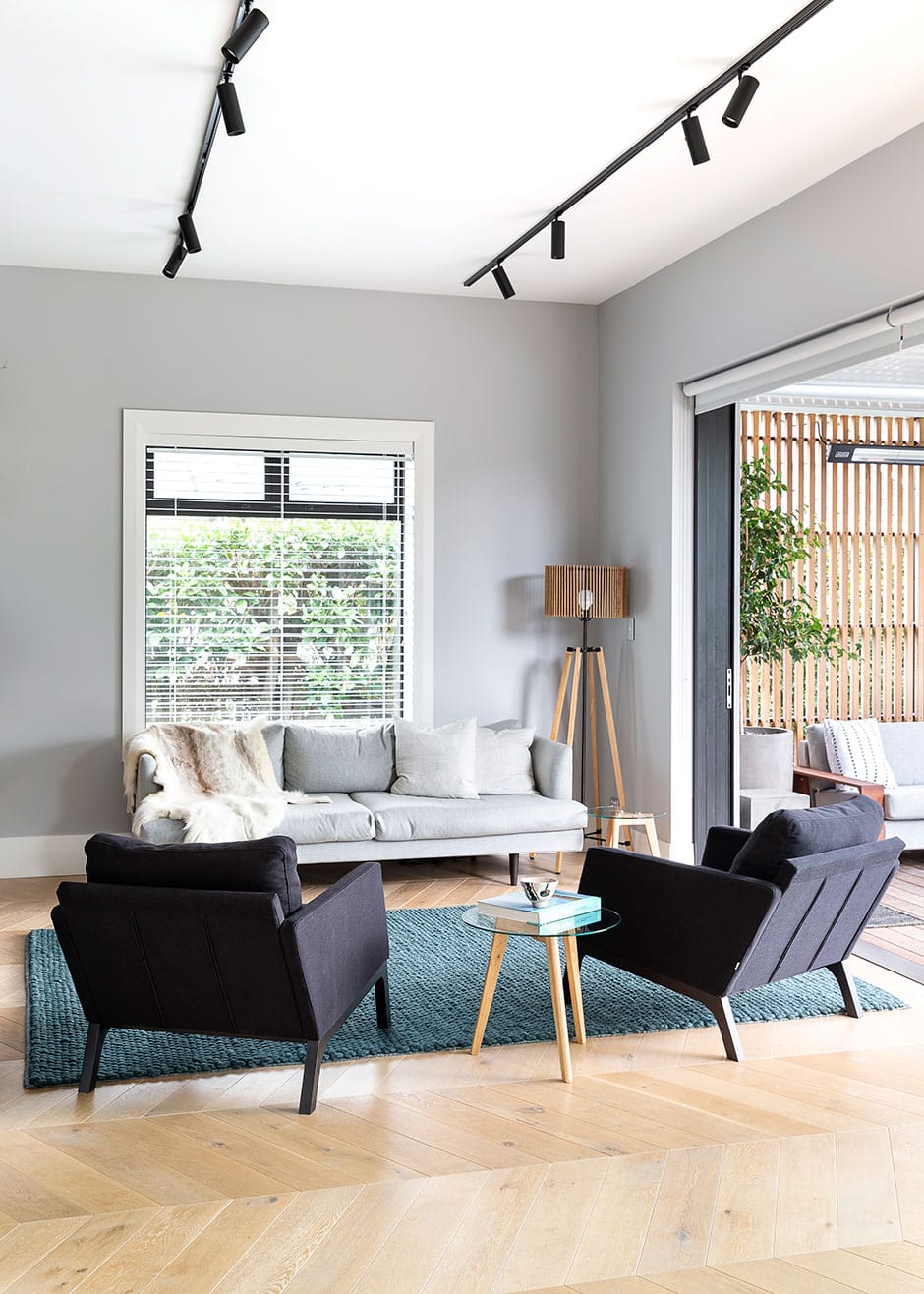 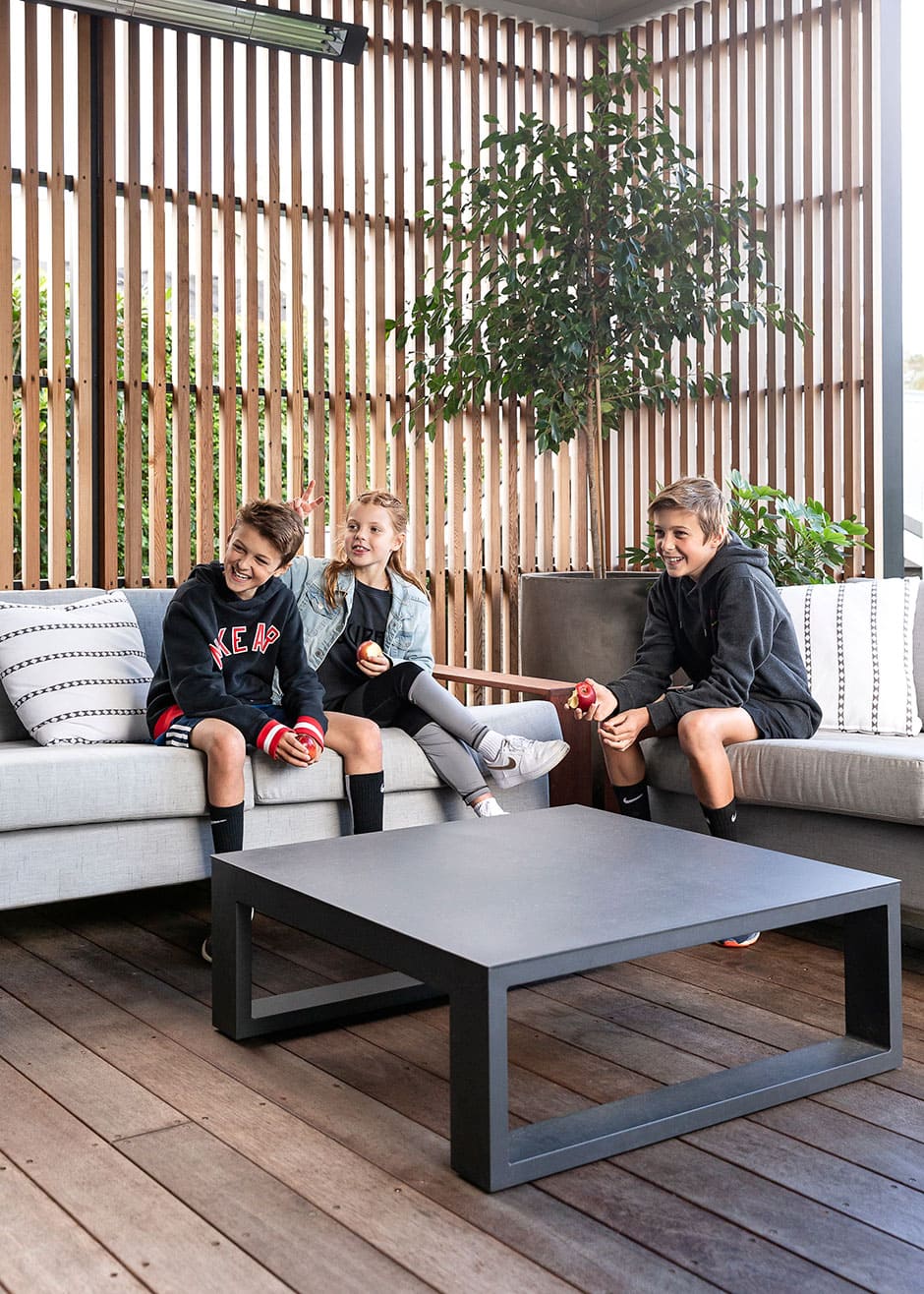 TOP Seating from BoConcept creates a conversation zone in the informal living area with side tables by NED Collections and a standing lamp from May Time that echoes the pendant in the kitchen. ABOVE The kids hang out on the deck on a sofa by Great Barrier Furniture. The coffee table is from Design Warehouse.

“We’d seen a number of Nikki and Clara’s renovations and had confidence in their design aesthetic,” says Kate. “Both Matt and I didn’t have time to be involved in every little detail, so we said, ‘Just come to us with the big stuff.’”
That included beautiful European oak flooring laid in a contemporary chevron pattern. “It ties the scheme together and really sets the tone,” says Nikki. “I always say that you can’t go wrong with good flooring and good lighting.” 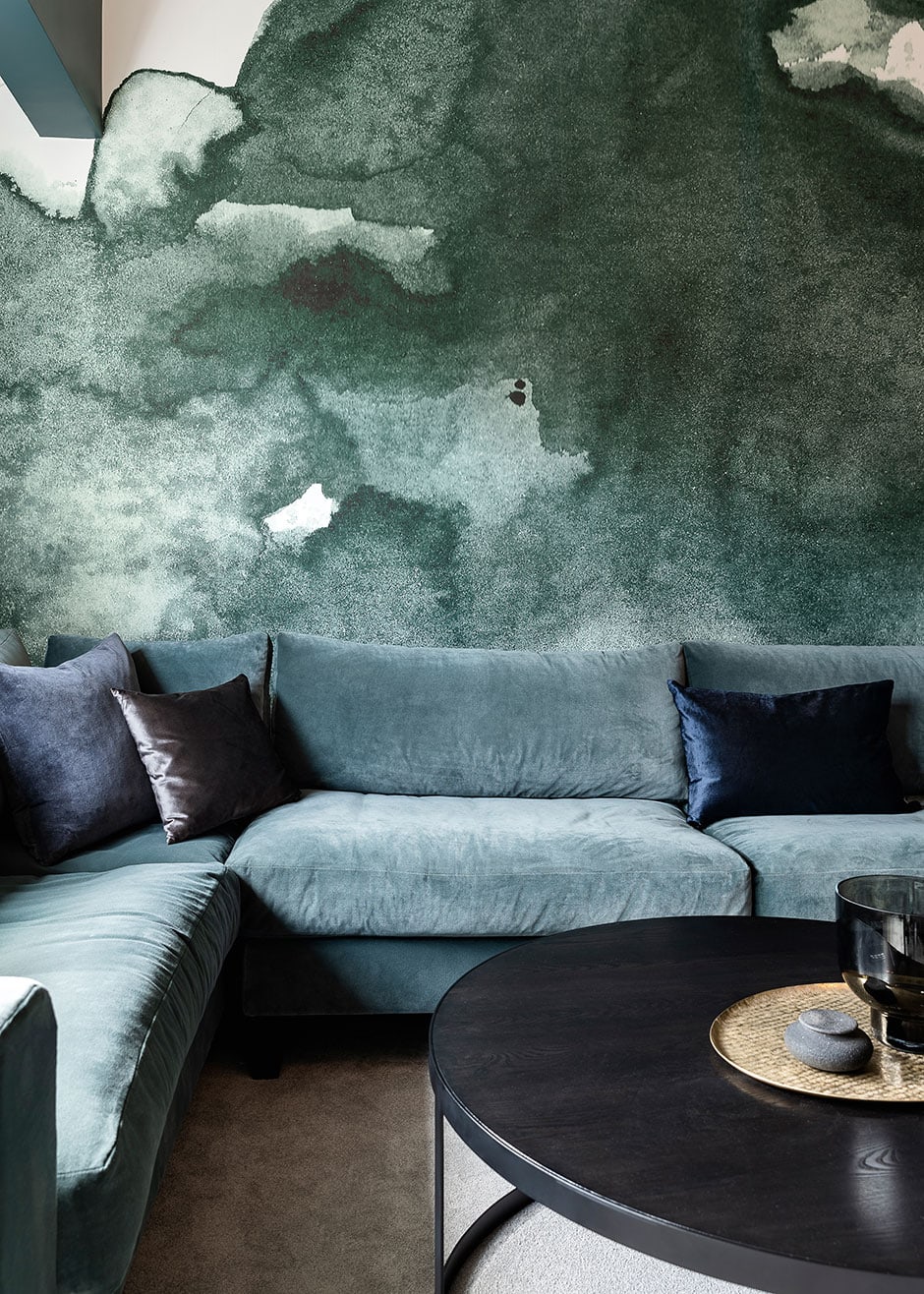 ABOVE The painterly wallpaper in the green room was custom-designed in London.

Nikki and Clara were involved from the architect’s concept stage and their main goal was to create a home with a strong, cohesive design. Every element was a thoughtful, deliberate choice. One of the first purchases was an enormous feature pendant light — a slatted drum that hangs to the side of the kitchen island. It became the material muse for this open-plan space that looks over the pool and right across to Mt Albert. A floor lamp in the corner of the informal living room matches it, as do the slats that frame the deck. 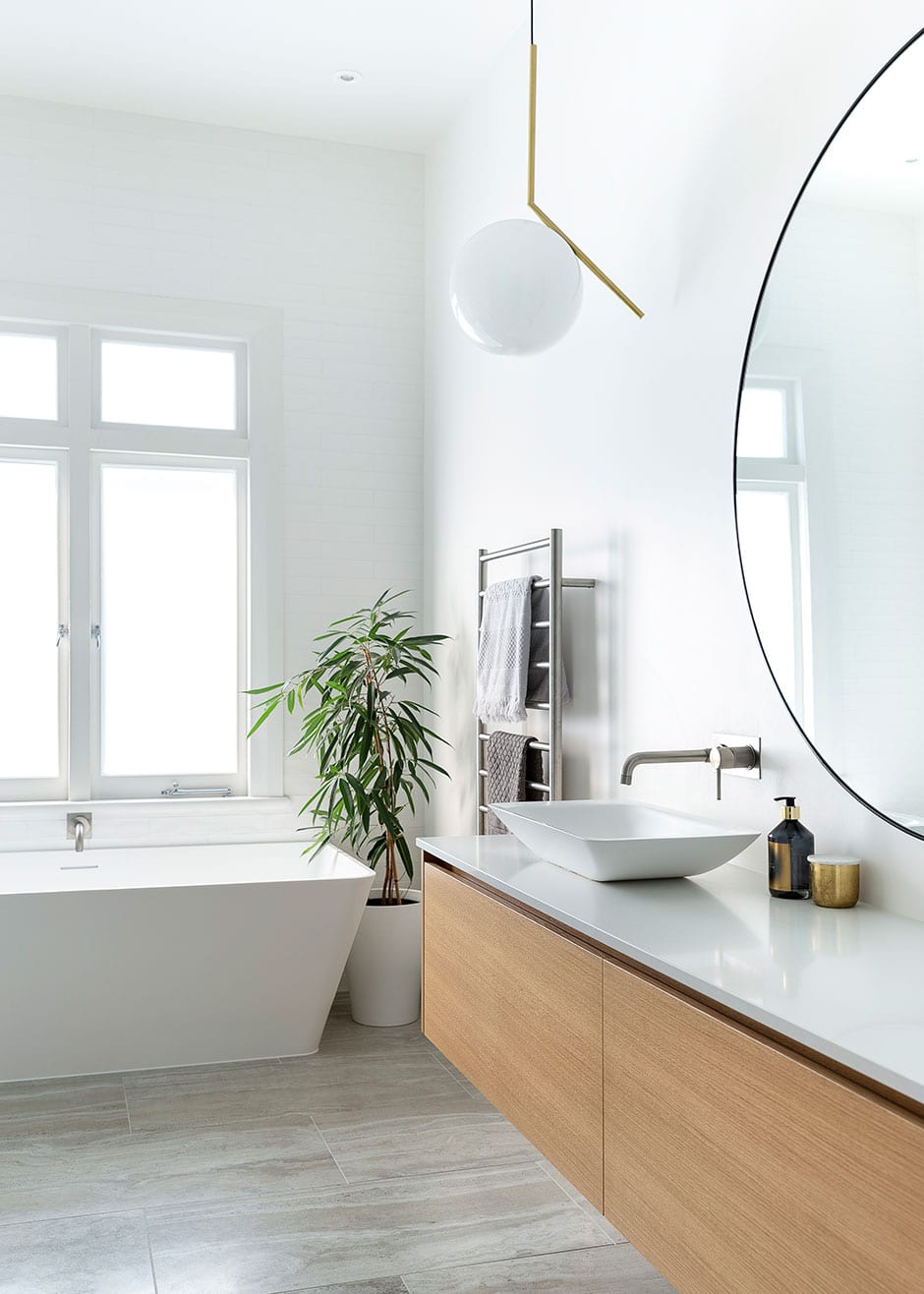 ABOVE Circular elements — such as the light from ECC and mirror from Father Rabbit in the main bathroom, offset above the vanity also by Carlielle Kitchens — are a recurring motif in this home. For this room, the intention was to create a quality bathroom that wouldn’t date too quickly. Providing timeless style are granite-look floor tiles from Artisan, plus wall tiles and oak veneer to match the kitchen.

Knowing Zoe isn’t a girly girl, the design team chose tiles for her ensuite in colours that became the palette for her bedroom, where a cane headboard and chair are just the right amount of retro. Joseph’s a keen surfer, so a print of an old Holden station wagon with a longboard in the boot was the springboard for the colour scheme in his bedroom. Eldest son Thomas has inherited the former studio, which now doubles as his bedroom and the kids’ TV lounge. 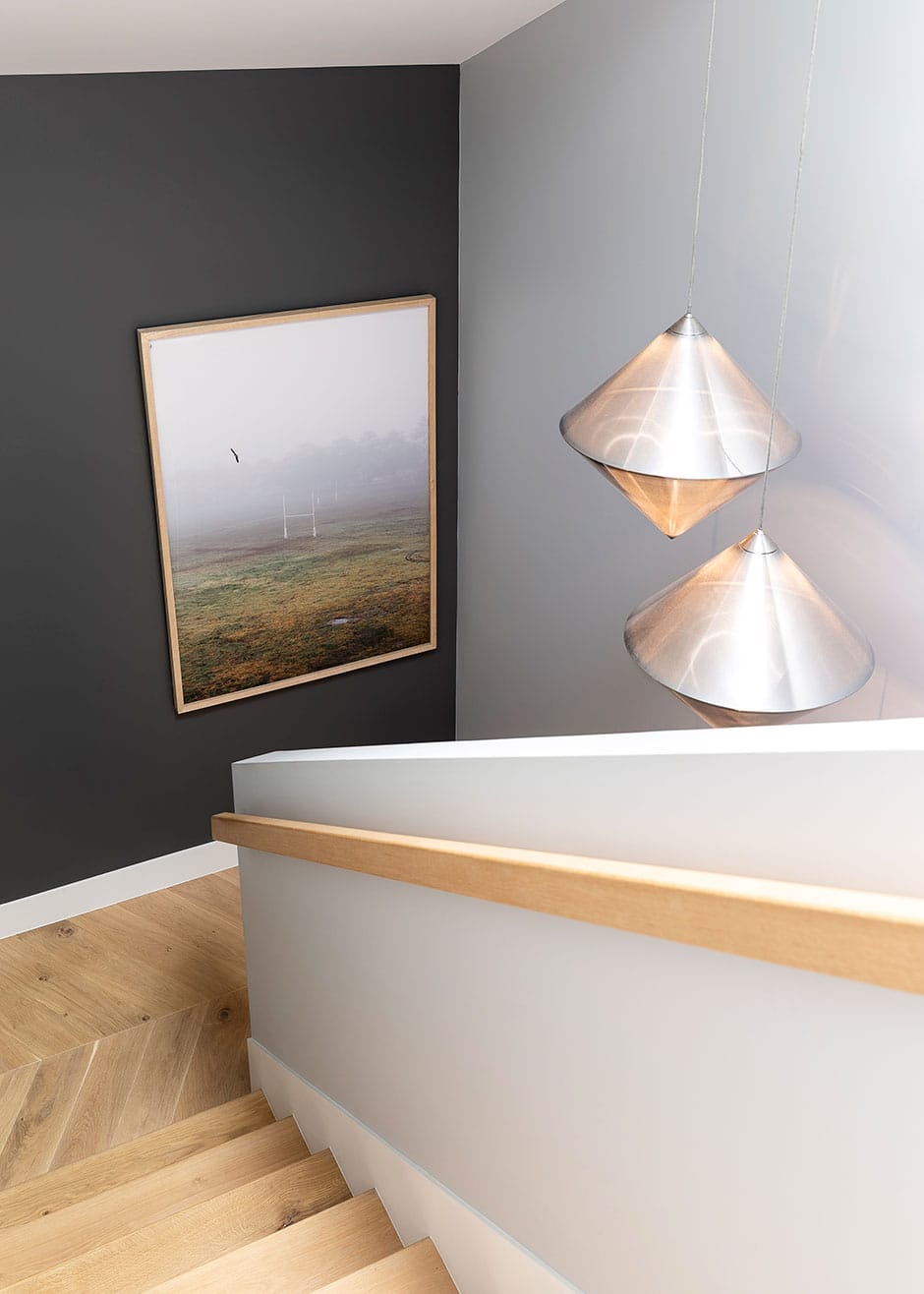 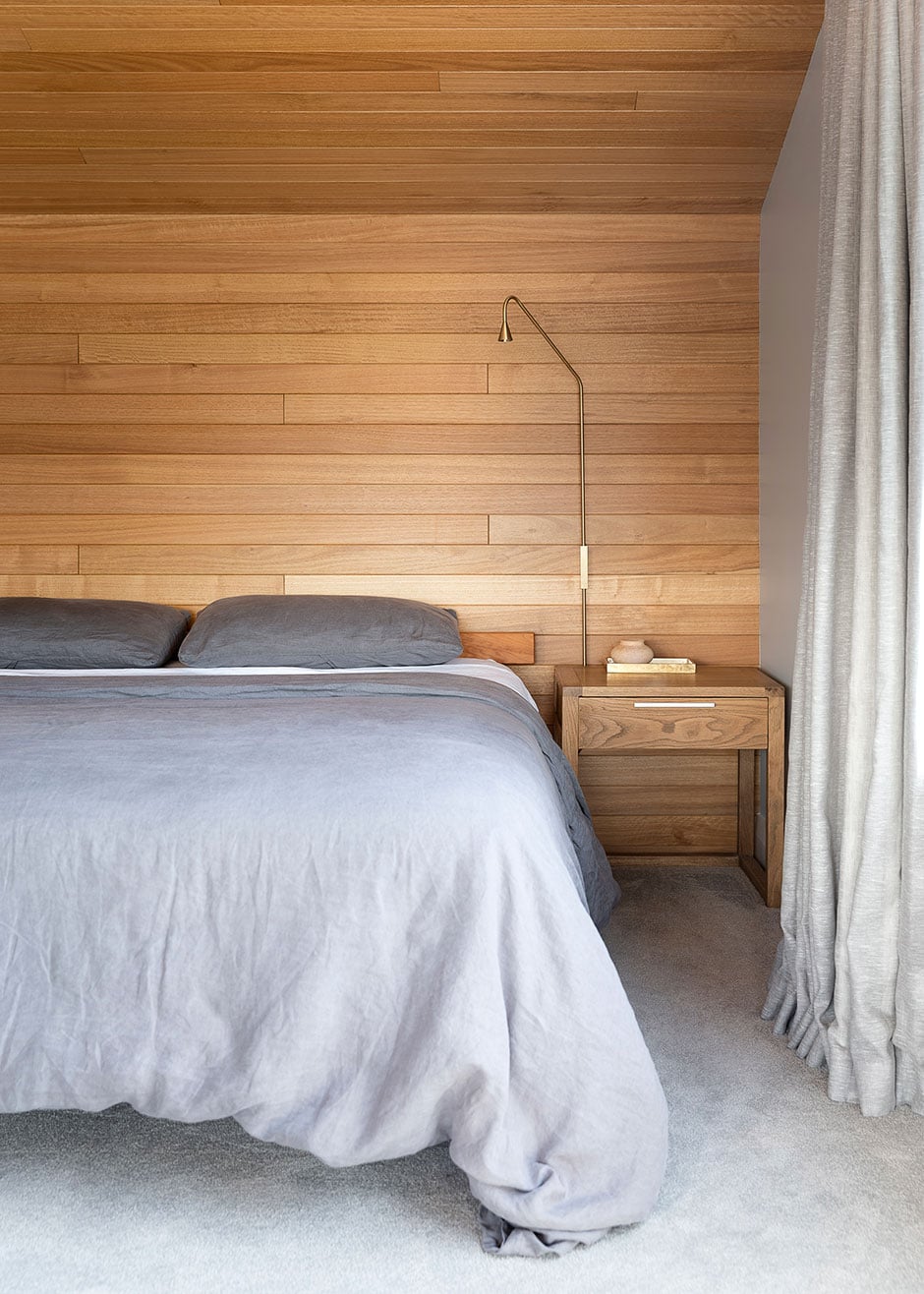 TOP Matt gave Kate this photograph by Kate van der Drift for a recent birthday. It hangs in the stairwell with a pair of Top pendant lights by Tom Dixon. ABOVE Pine elegantly lines the walls of the main bedroom on the uppermost level of the house, where the couple’s bedding is by Alex & Corban, the Austere wall lamp is from Light Plan and the wee pot subtly beautifying the bedside table is from An Astute Assembly.

It’s the subtle touches that make the biggest difference to the home’s design DNA, though. Like the way the round bathroom mirror, offset to one side of the vanity, is reflected in the circular pendant light in the atrium, and the tiles on the floor in the main bathroom are repeated in the entry. 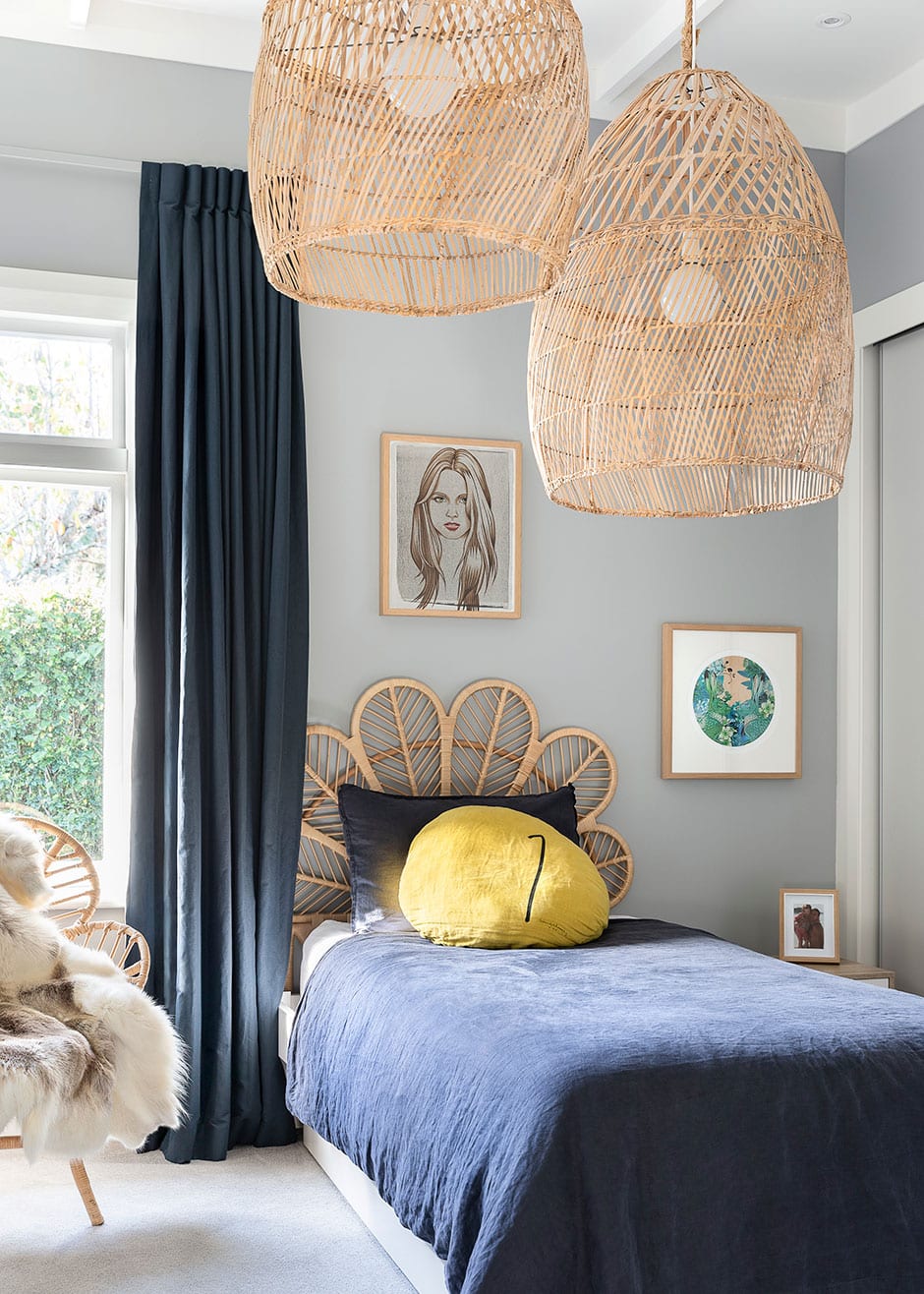 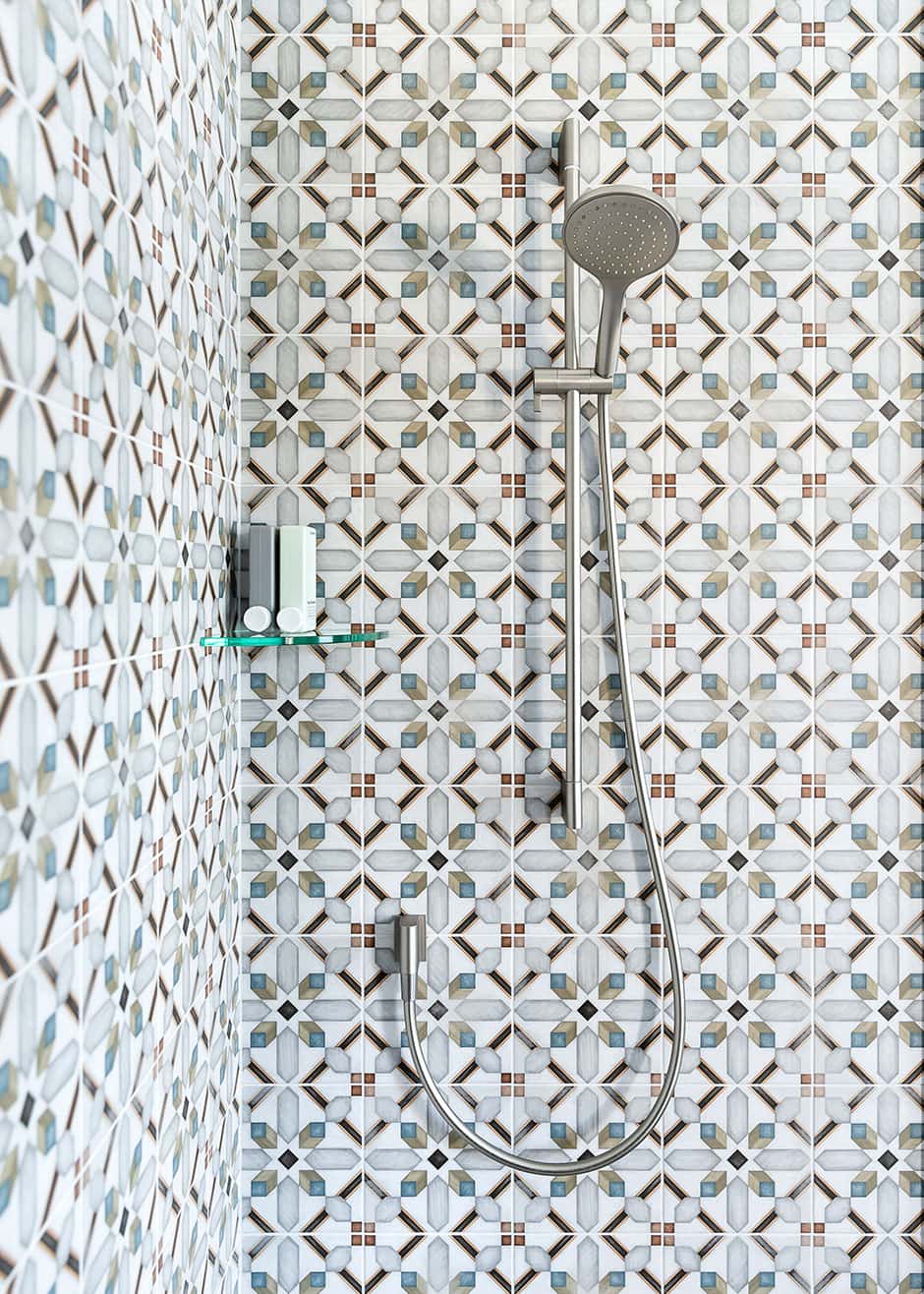 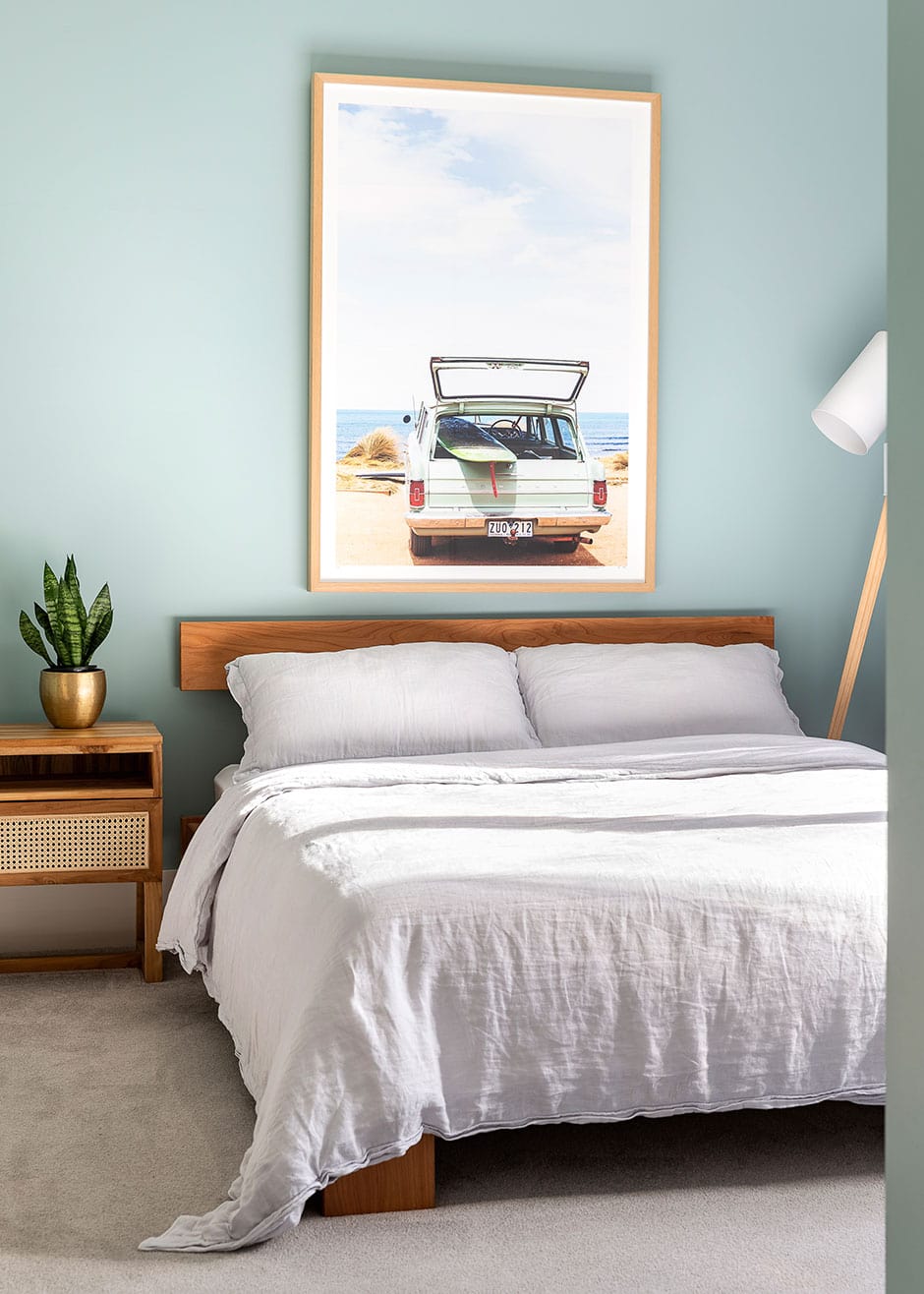 TOP & MIDDLE Above Zoe’s Flower Petal headboard from Shut The Front Door is a painting by Andrew Barns-Graham. “I thought it looked a bit like Zoe,” says Kate. The Demel Multicolour 20 tiles from Tile Space in her ensuite (pictured top) set the tone for the colour scheme in her room, which is painted in Dulux Tirau Double and also includes a chair by Shut The Front Door, light shades from May Time and artwork by Flox. ABOVE Joe’s tranquil bedroom in Dulux Cool is furnished with a bedside table from Indie Home Collective, bed by Natural Beds, desk by Freedom and chair by Mocka. His neat Diplodocus bookends are a Shut The Front Door find.

There are visual links everywhere, if you care to notice. With all the rooms beautifully finished and furnished, and a rapidly growing art collection lining the walls, home has become the family’s favourite place. On days when Matt takes time away from his luxury inbound travel business, and when he’s not tending the lawn, his preferred pastime is watching cricket, beer in hand, on the deck. Having a space where he could watch sport but still be outside was important to him, so the TV in the informal living area is positioned where he can see it from part of the deck that has a louvre roof and is enclosed on two sides. “It makes it feel like an outdoor room, and with the heater on is cosy even in the colder months,” says Kate. 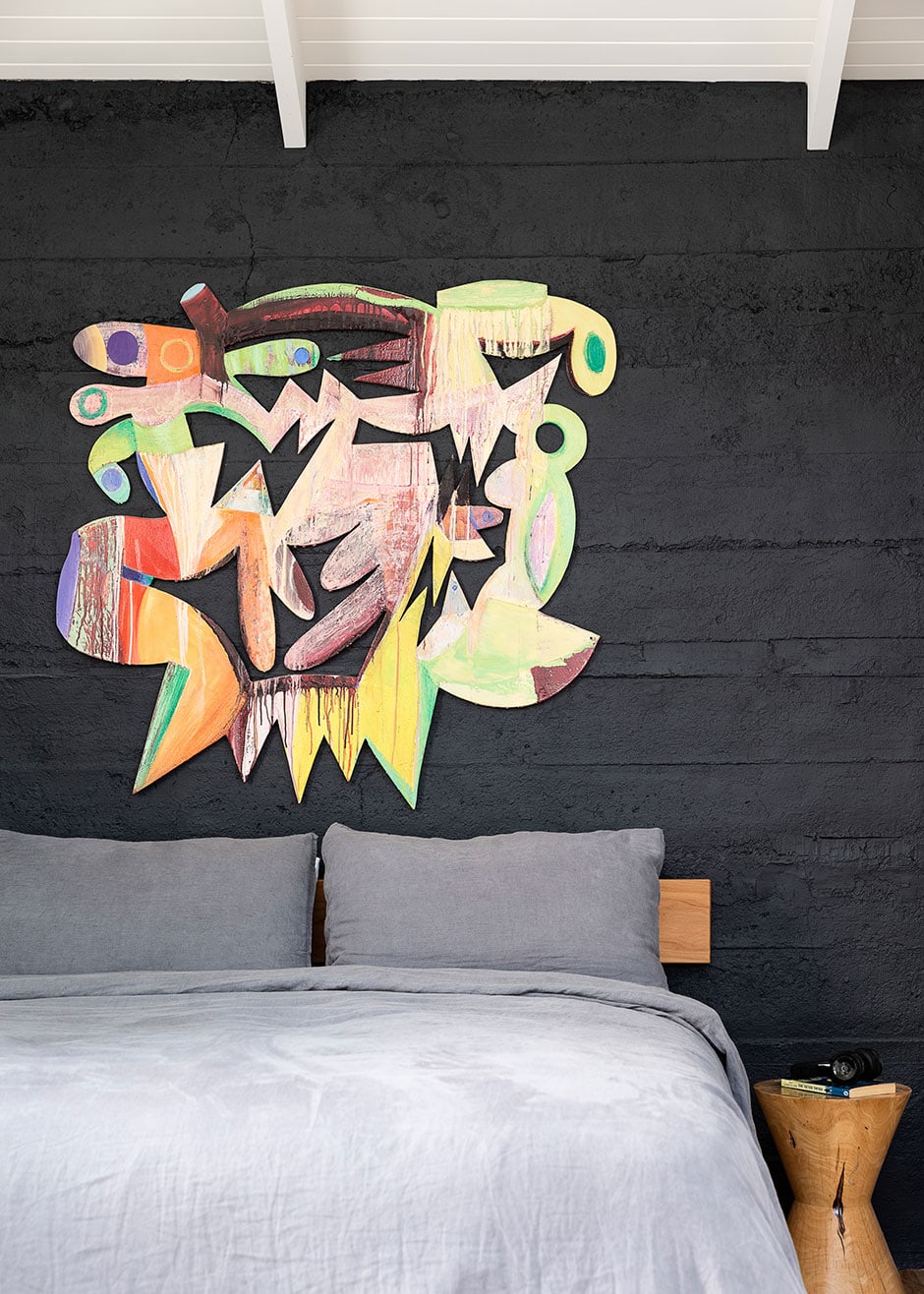 ABOVE What was once the studio is now Tom’s bedroom and the kids’ TV lounge. A colourful artwork, M.C.F.W., by Kate’s stepfather Rob McLeod, pops against this wall painted in moody Dulux Rawene.

Her non-negotiable was the ‘green room’. This space, where the luxe is laid on thick, is intimate and sophisticated and brings the extraordinary into the everyday. Bespoke green wallpaper like an ethereal inkblot is the artful backdrop to a custom-made modular sofa upholstered in green velvet. The latter was by far the most extravagant buy of the project, but luckily Matt has a good eye and insisted it was worth it. It’s reserved for family movie viewing, with no eating or drinking allowed. “The rest of the house isn’t precious, but in that room there are rules!” says Kate.
The other night, Kate had a vivid nightmare. Without telling her, Matt had sold the house and bought another one. “It had no roof and no walls and he was telling me that this was the ‘new’ thing,” she recalls.
A great sense of relief flooded over her when she woke up. “The only time I’d renovate again is when the kids have left home,” she says. “This house has been designed and built especially for us, to be lived in for many years to come.” Just hands off that green couch, kids.