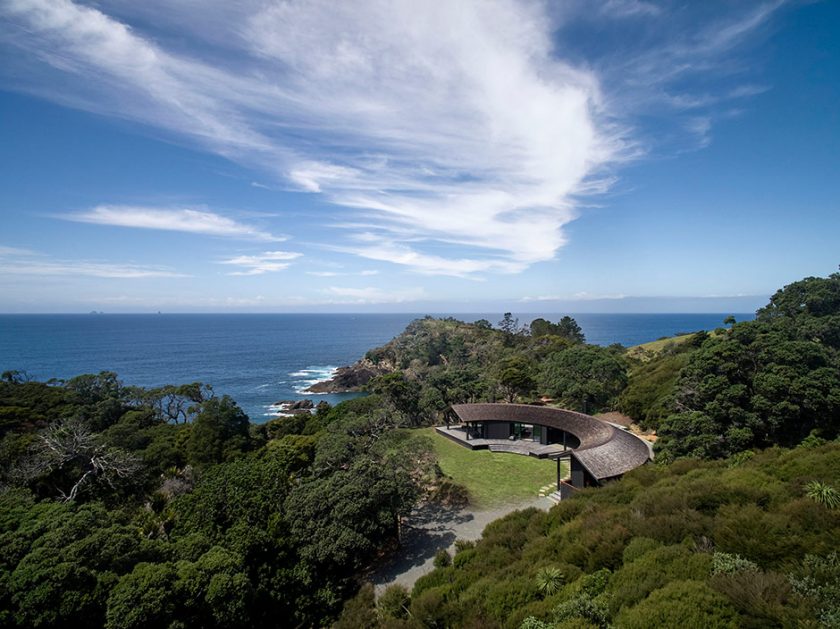 Tom Bowden’s holiday home is at one with the landscape. In a natural amphitheatre on a coastal site near Northland’s Matapouri, the building is shrouded in understated charcoal-stained cedar below a shingle roof, allowing it to visually blend into the surrounding bush. There is one distinct feature that sets it apart, though: the floorplan is a semicircle.
Fond memories of a childhood spent playing with his five siblings on their family farm here informed Tom’s decision to build a bach in the same place. “The commitment was made a long time ago, but like many things, the execution was the difficult part,” he says. “It’s taken 30 years to get around to building, because we subdivided the land to create a plot for each of the siblings, along with a few others with an interest in conservation, to help raise funds to regenerate the native bush, and we’ve left 92% of it as QEII-covenanted land and bush.” 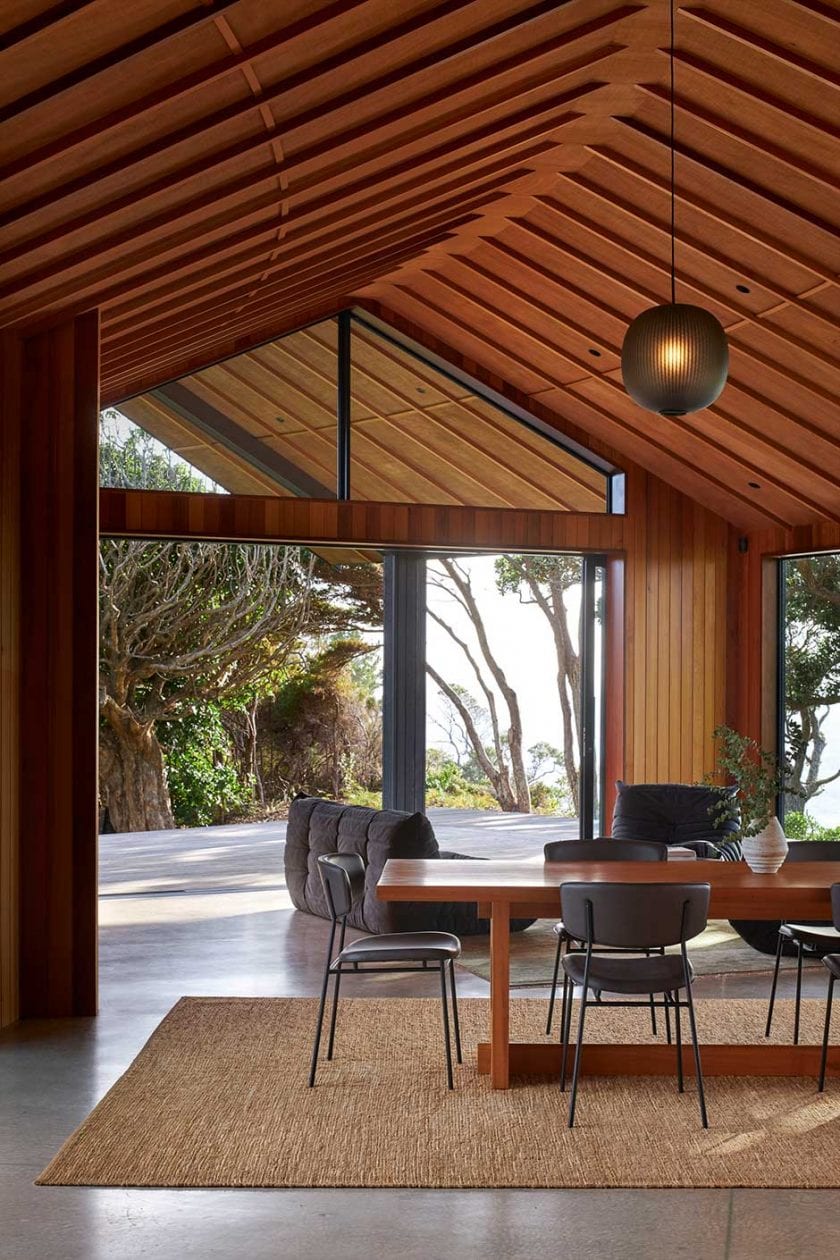 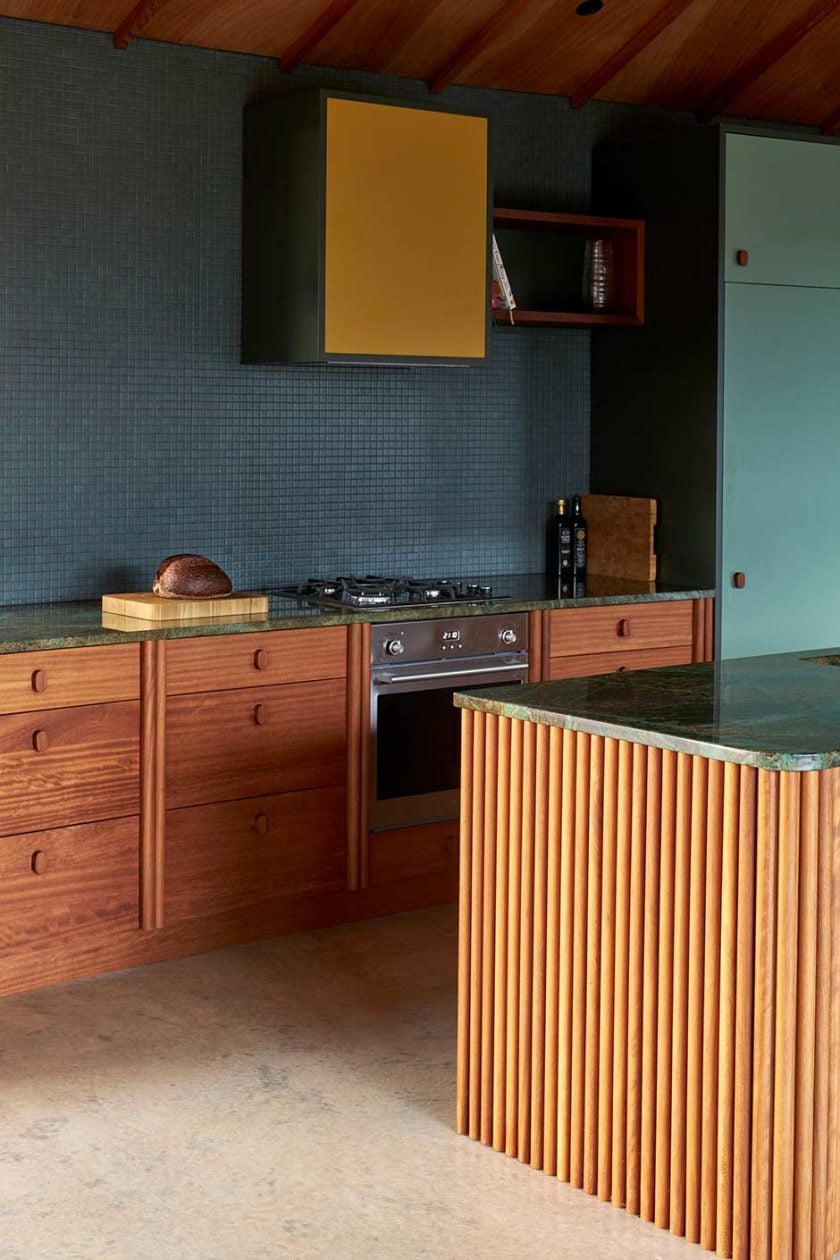 MAIN IMAGE The house isn’t quite clifftop, but you can look down the steep bank to a pebbly bay below that ensures the sound of the waves is ever-present. “The other night, I walked down the drive in the moonlight and heard a kiwi scuttling into the bush,” says Tom. MIDDLE Metro Series joinery by First Windows & Doors was used throughout the home, powdercoated in Matt Black and with Elemental hardware. In the living zone, picture windows and custom-made raked windows combine with bi-parting over-the-wall sliding doors (which also appear in the kitchen). Tom says the joinery is so well-insulated he was able to do away with curtains here. ABOVE The first time Tom laid eyes on the granite benchtops, they were in a dusty row in a factory in West Auckland, but when they turned up at the bach, they made an undeniably beautiful statement. The curved kitchen island below the slab on the right is finished with fluted iroko timber.

After having some initial sketches drawn up that didn’t quite fit with his hopes and dreams for this special spot, Tom turned to architect Belinda George for advice. “Belinda’s a friend and someone I’ve worked with for years,” he says. “She came by to do some work on my home in Auckland, so I asked her to have a look. She took it away and came back a few days later with a drawing of this semicircular design.”
It’s a plan that references marae buildings, with spaces to gather together in and retreat to. Half of the semicircle contains a communal living zone, and the other houses bedrooms, bathrooms and a laundry connected by a breezeway that’s open to the outdoors.
“I told Belinda I’d like not to have any windows limiting that space,” says Tom. Over-the-wall sliders from First Windows & Doors cater perfectly to this request, opening it — and the front of the living zone — right up. 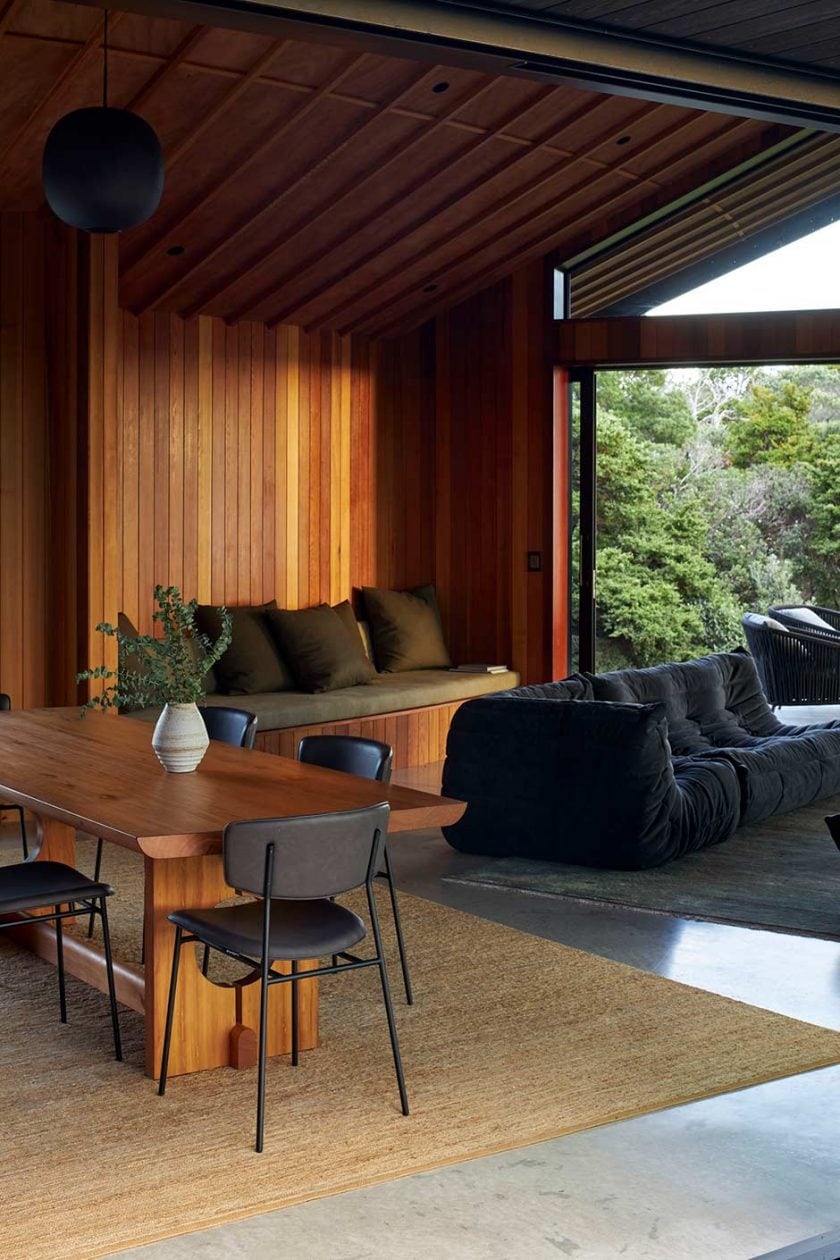 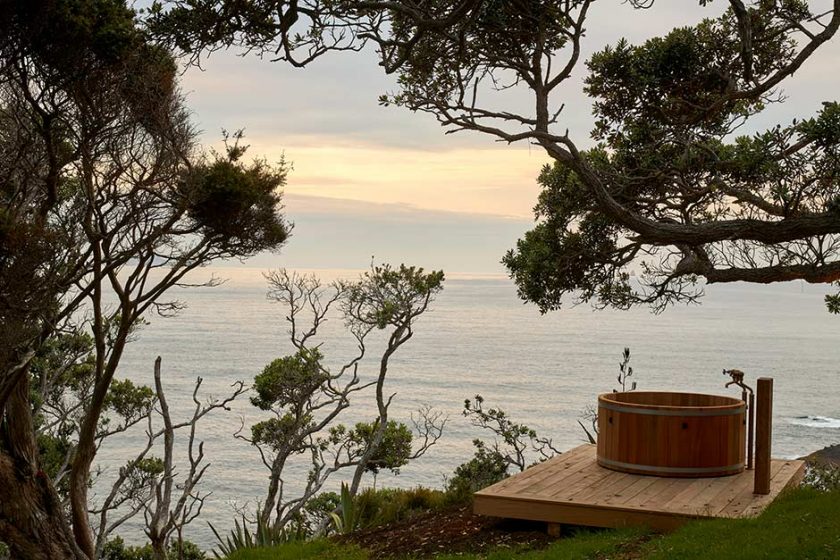 TOP Taking a holistic approach to the project, architect Belinda also specified all aspects of the interior, from the material and colour palettes through to the furniture, which includes a tōtara dining table she designed herself and teamed with Fifties chairs by Calligaris from Dawson & Co. Against the backdrop of cedar timber, her colour palette hints at the blues of the ocean, plus the greens of the pōhutukawa and other plants outside. ABOVE A cedar hot tub has recently been added to make the most of the magnificent views.

The flexibility to open and close the bach works purposefully to make days here feel ultra-easy. Site-specific furniture such as the dining table and built-in seating were designed by Belinda, while other pieces, like the outdoor furniture, can be moved to follow the sun, whether for breakfast on the eastern deck, or drinks and dinner beside the outdoor fire in the covered courtyard by the kitchen.
“When I was a kid, we used to play here, and on wet days we’d make our own sleds and come screaming down the hill into this lovely little semicircle above this piece of bush,” says Tom. These days, he enjoys swimming and boating out to the Poor Knights marine reserve and “there’s always plenty to do on the farm itself. On days when I’m an early bird, getting started on the environmental work while the sun rises over the islands is amazing.” 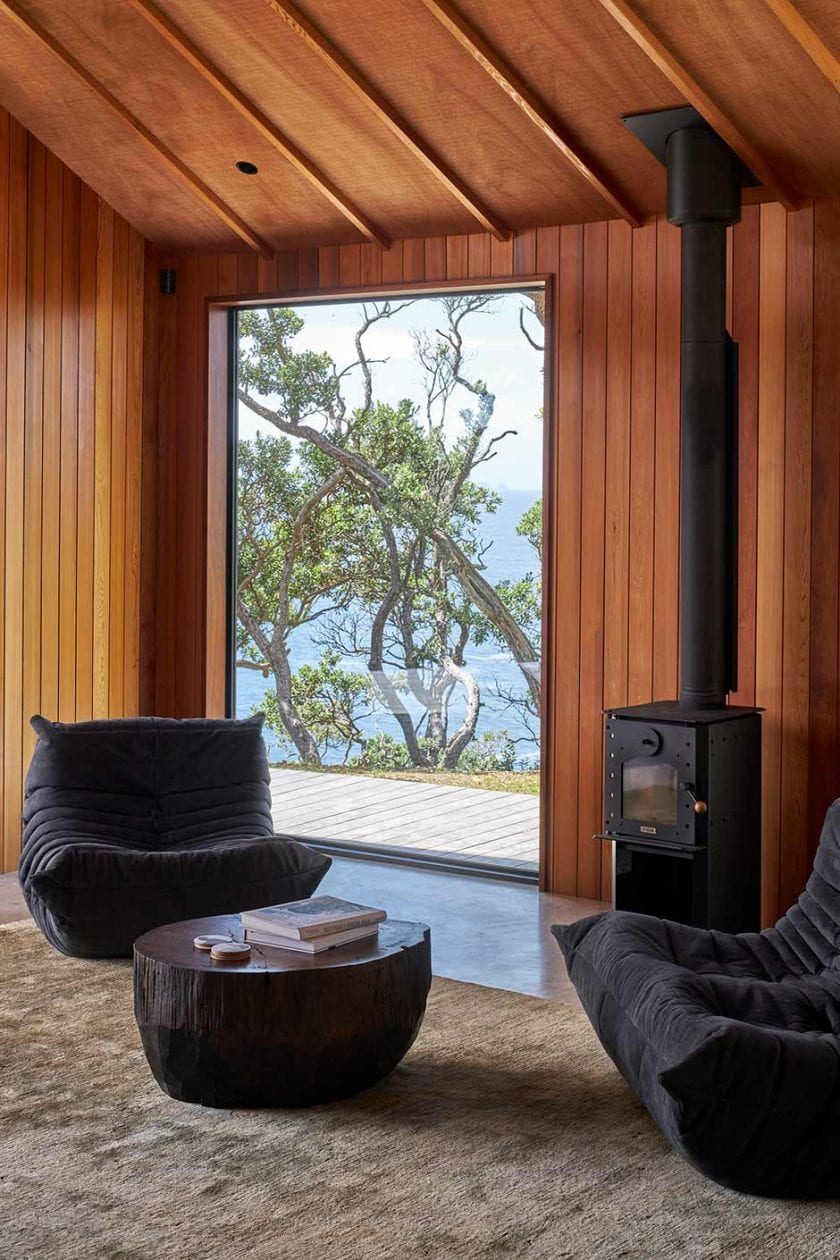 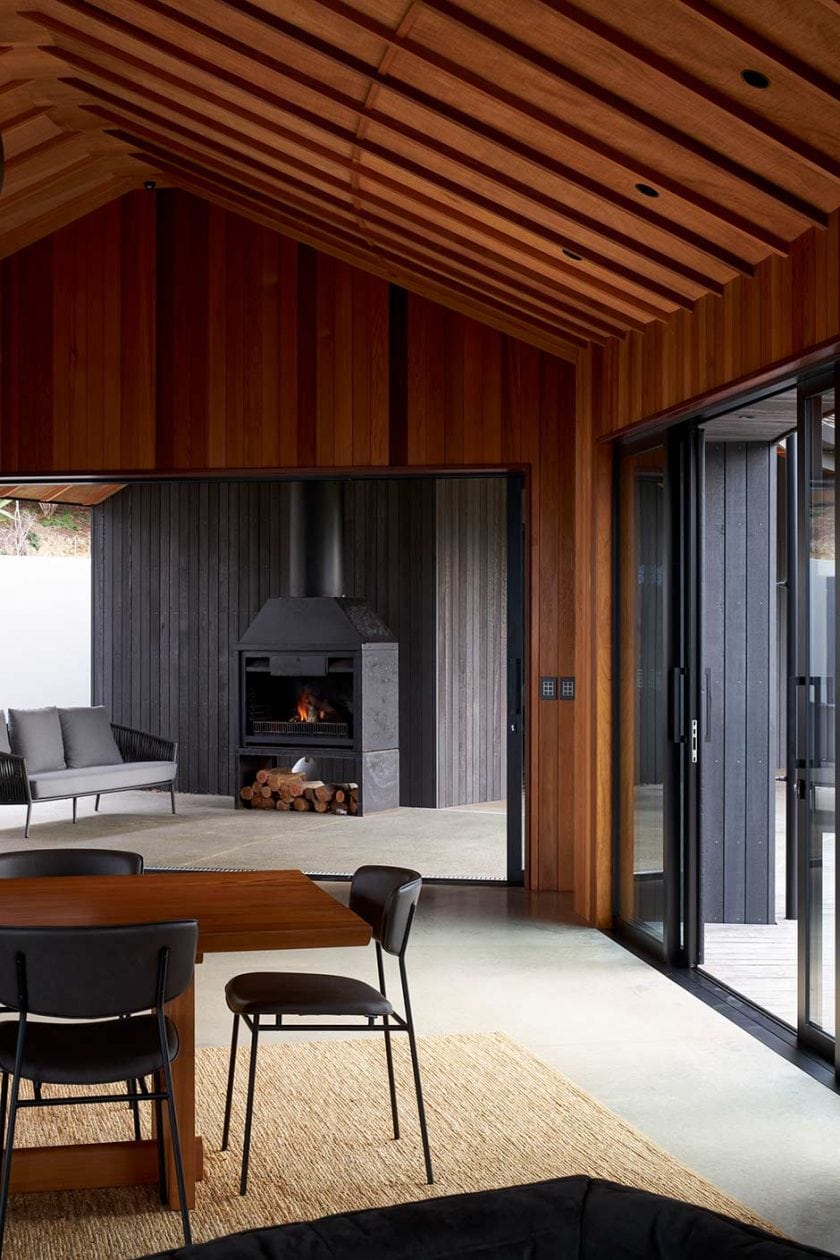 TOP The house has fireplaces indoors and out, so “with the big concrete pad, the good windows and double glazing, it manages to stay really warm,” says Tom. “Even in winter, you can walk across the deck from the bedrooms rubbing your hands together, but when you open the door to the main living space, it’s a nice temperature inside.” Here, another of the epic views is framed by a picture window by First Windows & Doors. ABOVE The vertical cedar cladding on the exterior of the bach is repeated inside, but with a tongue-and-groove treatment. Inside, the ceiling pairs cedar battens with Meranti plywood, while outside, the Alaskan yellow cedar roof shingles have been left untreated so rainwater can safely be collected.

Tom’s spirit of adventure boded well when realising such a technical design (“The figures required to get this right were huge,” he says. “The builders ended up with a lot of timber offcuts around the site with calculations scrawled all over them”), but he mostly puts the ease of the process down to having trusting relationships with the people he was working with.
“The partnership between Belinda and builder Pete Brown was very important,” he says. “Pete’s built a lot of very good houses on the Tutukaka Coast, so he also knows all the right tradespeople.” 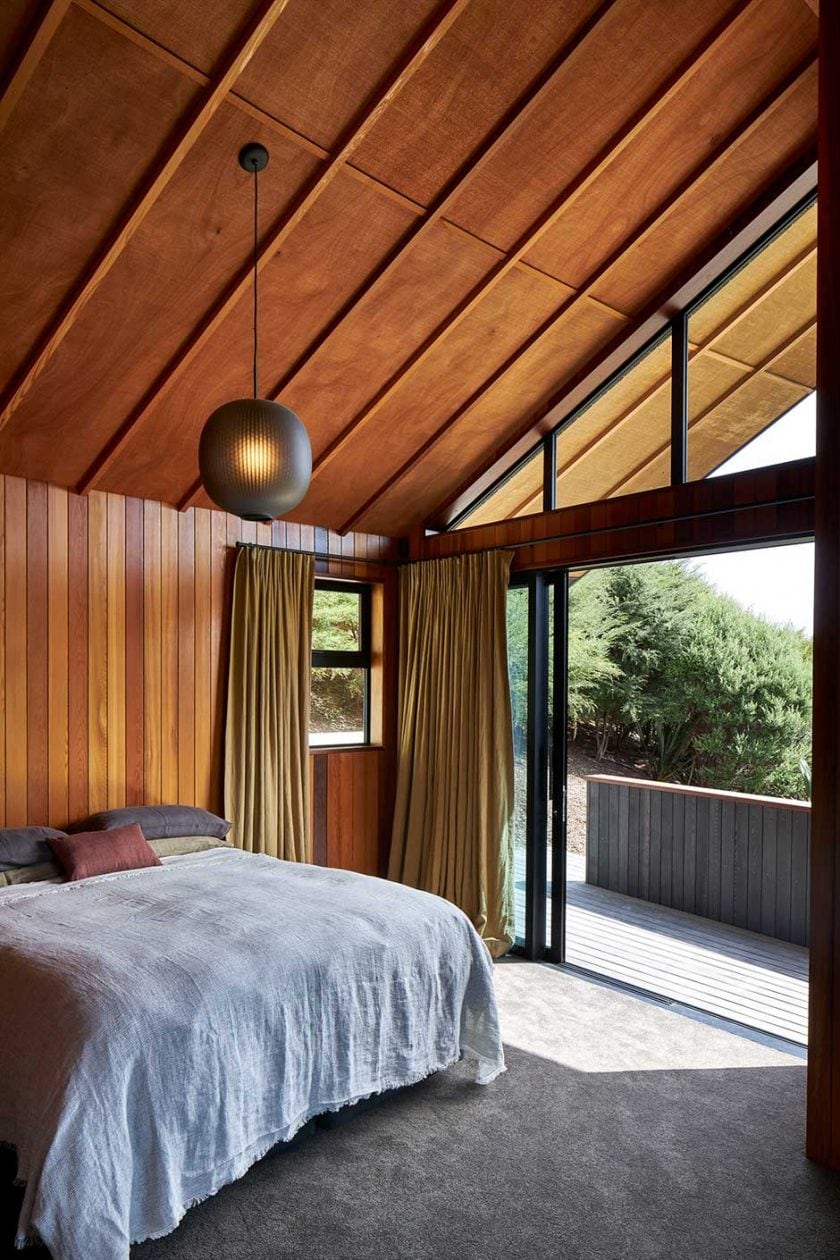 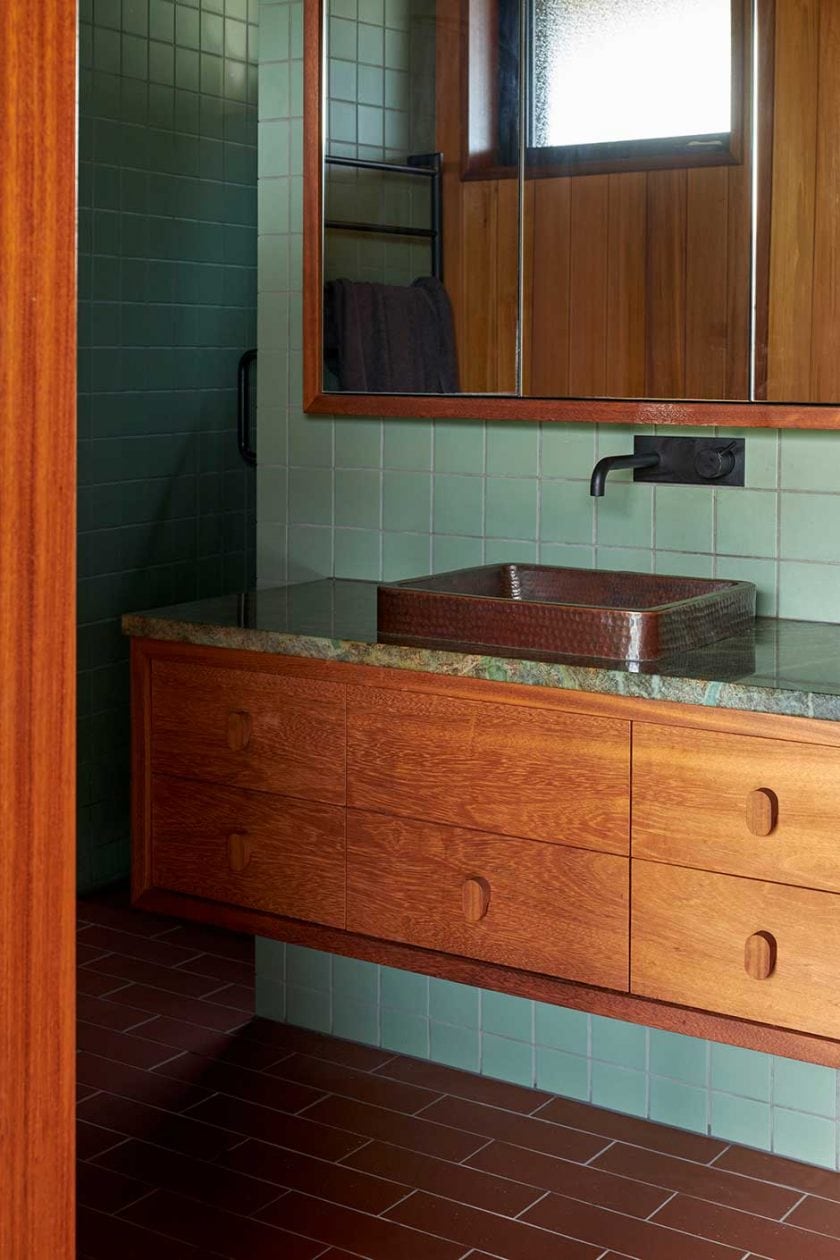 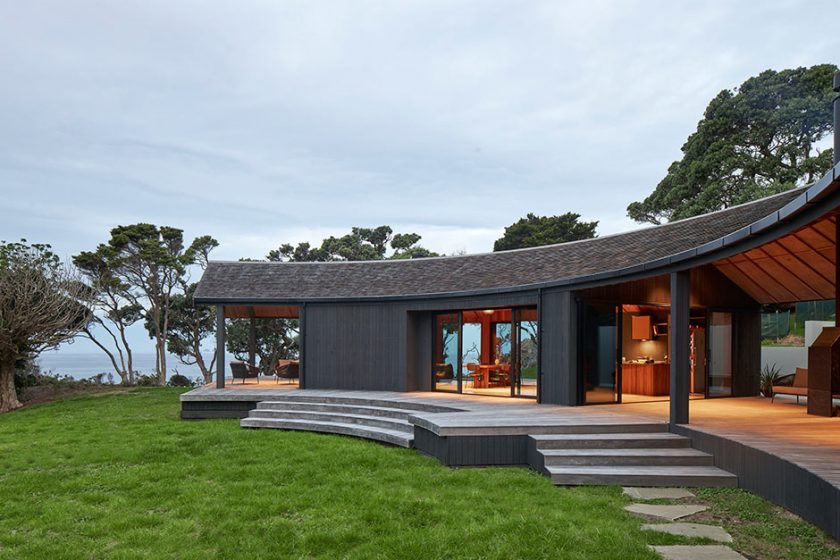 TOP The sleep spaces feature Metro Series stacker sliding doors and custom-designed raked windows by First Windows & Doors. In contrast to the openness of the living zone, these rooms are designed to cocoon, with heavy linen curtains on the windows and carpet underfoot. Here, a Bloom pendant by Resident echoes the living area’s lighting look. The bedding is from Città. MIDDLE Per her nature-inspired palette, in this bathroom, Belinda opted for soft green and terracotta tiles. The bespoke vanity pairs a copper sink with the same granite used in the kitchen. ABOVE At 162m2, the bach is relatively small, but it’s bumped up by 235m2 of deck — a perfect proposition in this sunny part of the country. Last year, Tom threw a New Year’s party, sliding open the front of the house and both ends to comfortably accommodate 120 guests.

Thanks to its openings on all sides, there’s no formal entrance to this house, and Tom runs an open-door policy for friends who want to grab the keys and head here for some downtime. Being off the grid, it’s a place in which to enjoy simple pleasures and a connection to the land captured in the well-planned views and felt through the journey between the public and private zones, making unwinding effortless.
“No matter how long I’ve been away, I always feel relaxed when I arrive here,” says Tom. “When you open up the living space, the scent of the cedar hits you and the warmth is really inviting.
Deliberately informal yet thoroughly considered, at this coastal retreat, time need only be measured by the tide, and the rising and setting of the sun.
firstwindows.co.nz

NextHow to throw a throw, woven in with a selection from Weave