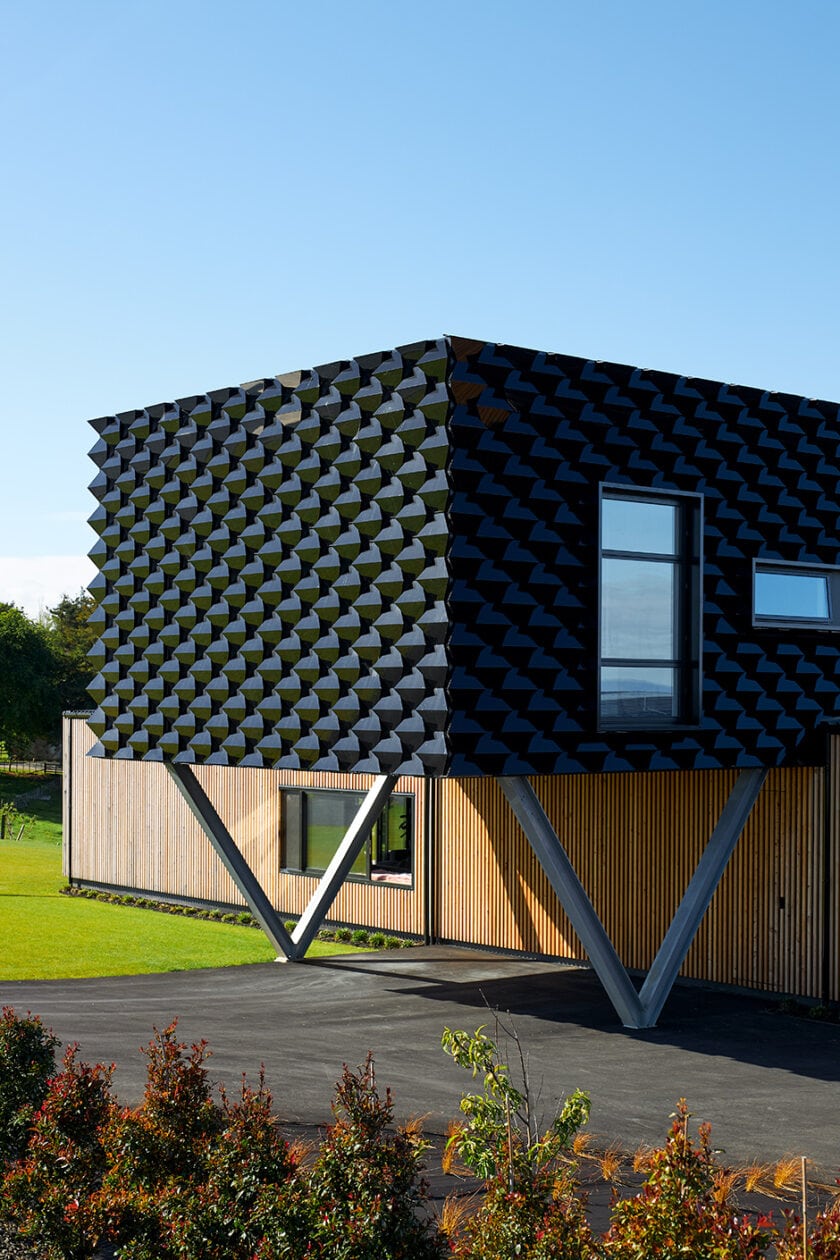 The abode he has designed for his family thinks outside the box, with cleverly conceived forms and lots of glass for flexible spaces, natural ventilation and passive solar gain.

Making your way through a valley where Hamilton’s city limits meet Waikato pastures, you can’t miss Kylie and Noel Jessop’s new home. A dark form rising from the ridgeline catches your eye on approach, though it’s not until you’re much closer that you realise this glistening upper storey  is clad with a glossy membrane of fish-like scales.
“The metal scales were an idea I wanted to experiment with to give the exterior depth and texture,” says Noel. When you’re an architectural designer, that’s the sort of thing you get to trial when you’re crafting your own abode. It becomes a testing ground for pushing ideas further than you might get to with your clients. 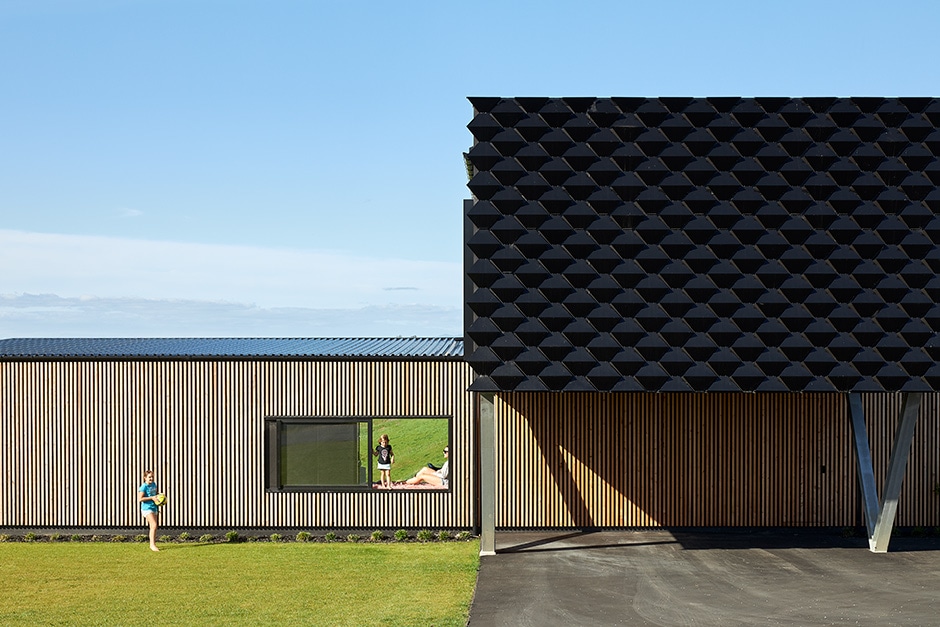 MAIN IMAGE & ABOVE The build of this home was expertly led by Hayden Johnstone of Johnstone Building. Larch battens clad the ground floor, where the entry is hidden behind a hinged door. The upper floor features a custom rain screen made from black powdercoated aluminum scales individually installed in situ. First Windows & Doors joinery powdercoated in Matt Black recedes into the textural surface treatments.

The couple hadn’t really been looking for a personal project, but their blended family with four kids in the mix had fuelled a need for more space and a desire for a carefree rural lifestyle. “After working with a client of mine in the area and mulling over subdividing with them, I spotted this section on Trade Me purely by chance,” says Noel. He and Kylie had spent a bit of time in the area and already had an emotional connection to it. They knew they’d found the spot in which to build a home designed to bring them all together. 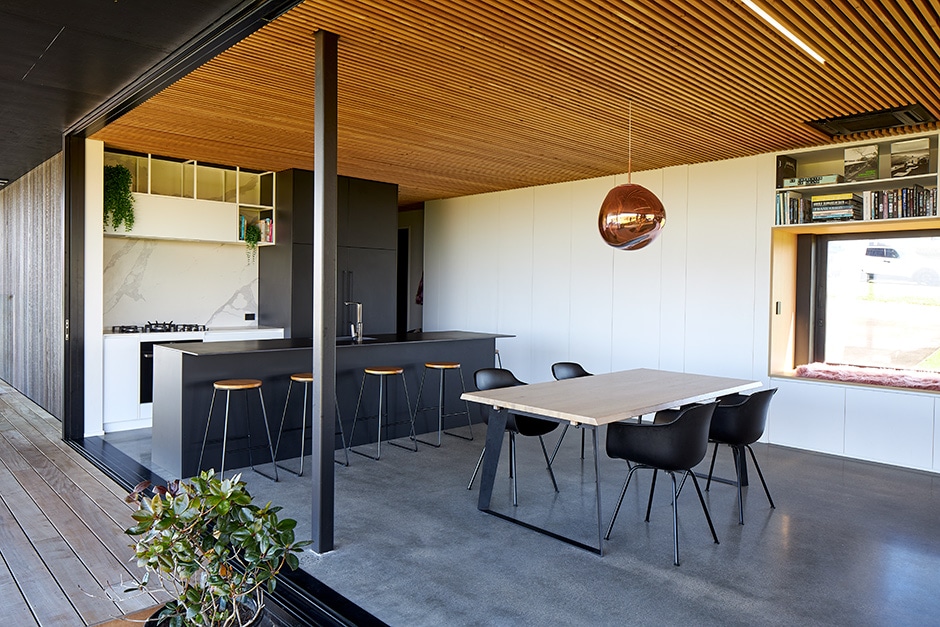 ABOVE So as not to interrupt the flow between house and garden, the kitchen was kept minimal, with integrated appliances plus the pantry and plentiful storage stowed behind soft-touch acrylic cabinetry by Laminex in Pitch Black and White Linen. Laminam in Naturali/Bianco Statuario Vento was used on the splashback and Laminam in Nero Assoluto features on the island benchtop. The built-in nook in the dining area includes a picture window with a First Windows & Doors Metro Series over-the-wall slider that opens right up to provide cross-ventilation.

The intelligent architecture here is guided by the aspect of the site. What was once a hilly paddock with an old shed plonked in the middle now houses a ground floor clad in timber topped with a smaller second storey that’s cantilevered out on both sides of the building. This upstairs structure does double duty as a veranda over the outdoor dining area at the front of the house and as a carport at the back.
“I could make a joke about how my friends view my architecture,” says Noel. “They say we’re really good at designing boxes, but we could only afford the two-box option for our place: the long box and the short box.” 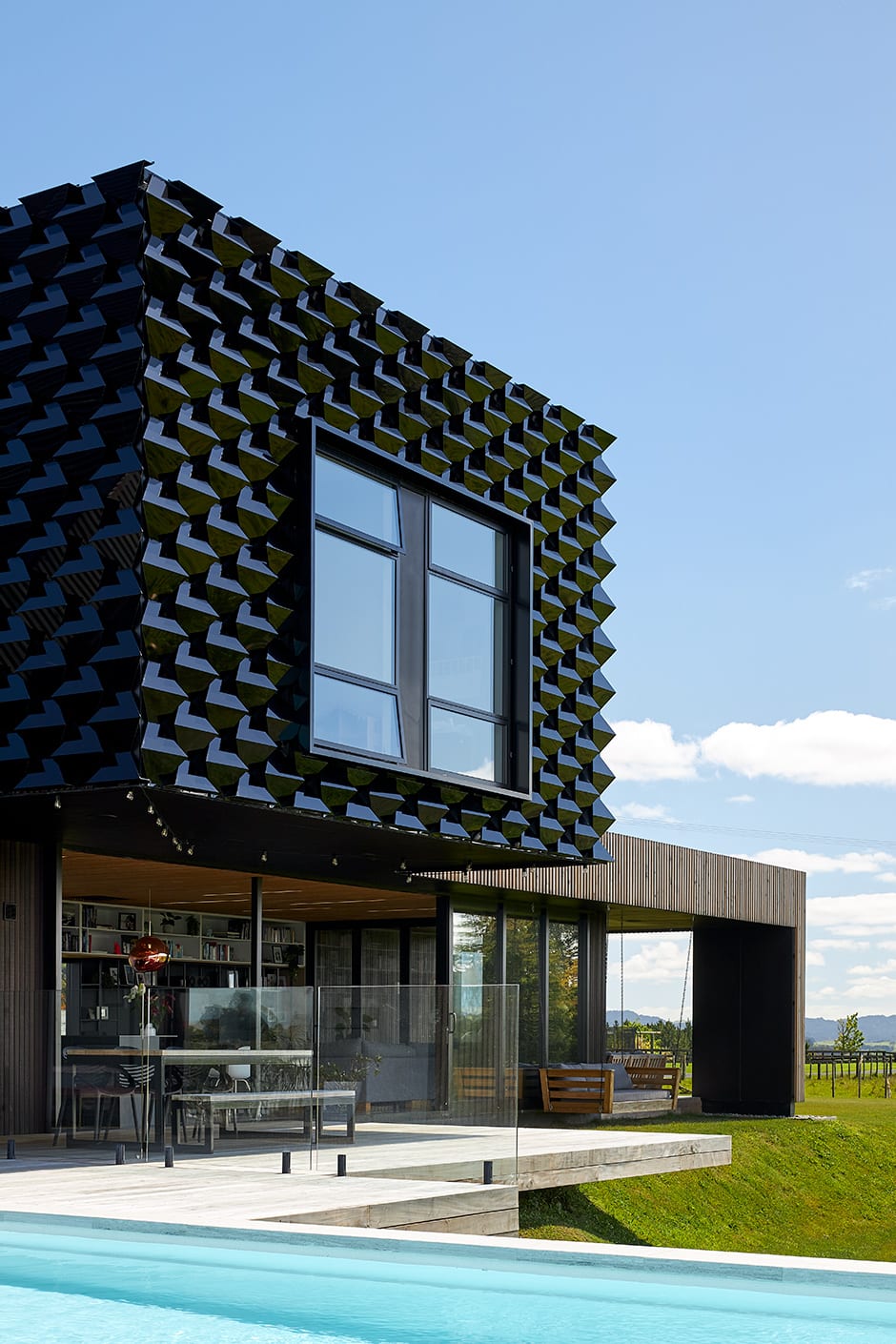 ABOVE The home’s smart design responds to the environment, maximising the sun and harnessing the wind that whistles over the hills to create an optimal internal climate with passive solar gain and natural ventilation. The physical connection it allows to the outdoors was also really important to the couple. “One of the big components is being able to have the doors full height,” says Noel. “At 2.7m high, the floor-to-ceiling sliders provide an expansive view that’s unobstructed by joinery.”

The ground floor spreads out from the entry at the rear of the house into an open-plan kitchen, dining and living area at one end, and the main bedroom and ensuite at the other. This level is divided in two by stairs that lead up to the kids’ zone, where Carter (11), Aja (8), Jayden (6) and Layla (4) each have their own bedroom, along with a shared bathroom and hang-out space. 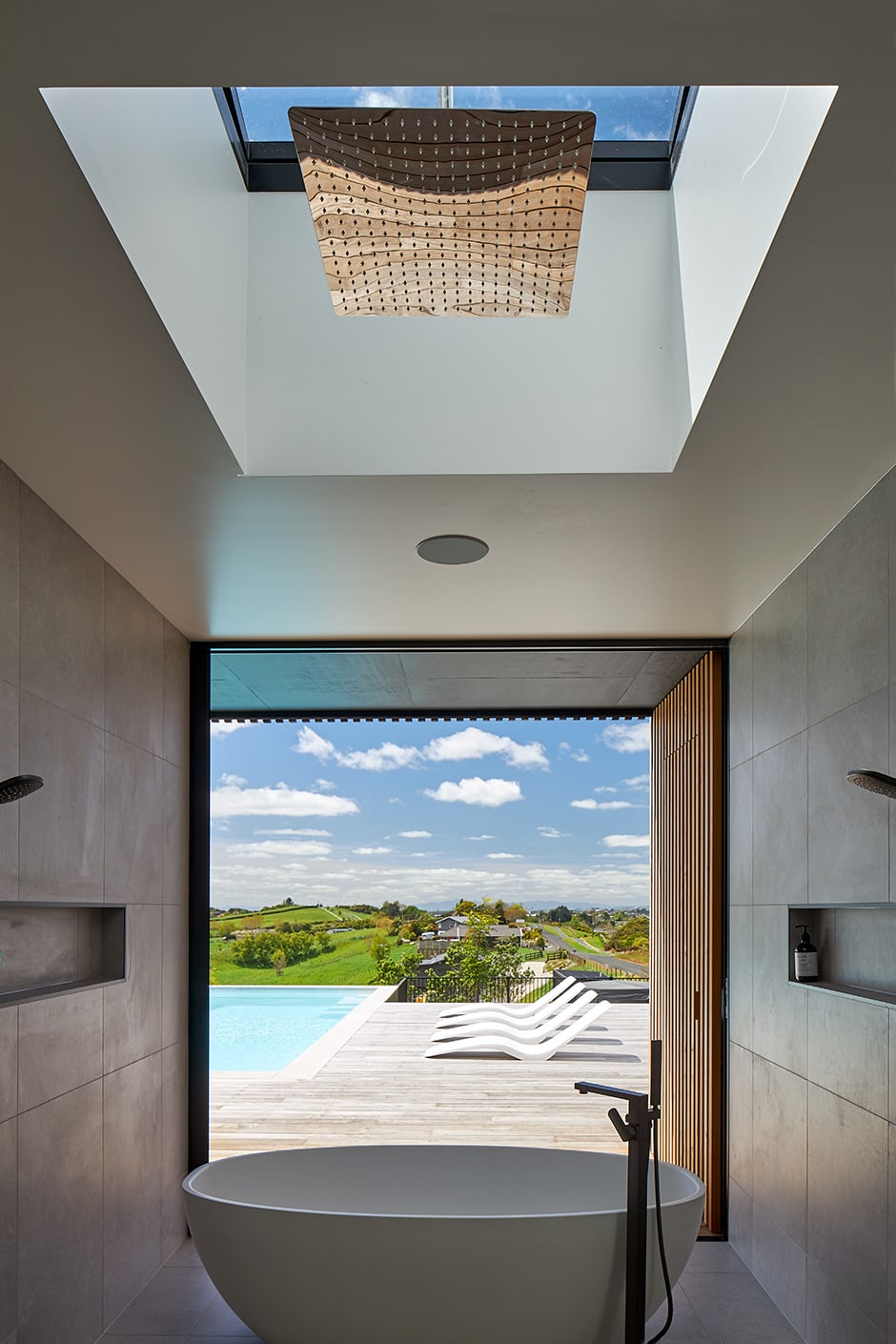 ABOVE Kylie’s brief for the ensuite was “light and bright, with a resort-like feel”. To achieve this, Noel designed a room that lets the sun shine in from all angles through a ThermalHeart roof window and a Metro Series over-the-wall sliding door, both by First Windows & Doors. The view from the freestanding bath is one of the best in the house. “Being orientated to the east means that from the minute the sun comes up over the hills, you get the most incredible glow across the sky,” says Noel.

A monochrome scheme that doesn’t detract from the view, the interior palette includes surfaces selected to withstand the hard knocks of family life. Larch battens on the ceiling and concrete underfoot add texture and warmth. Organised around a long island bench, the simplicity of the kitchen belies the plentiful storage behind the handleless cabinetry that extends along the wall to form built-in rest stops also used for stashing books and displaying mementos. 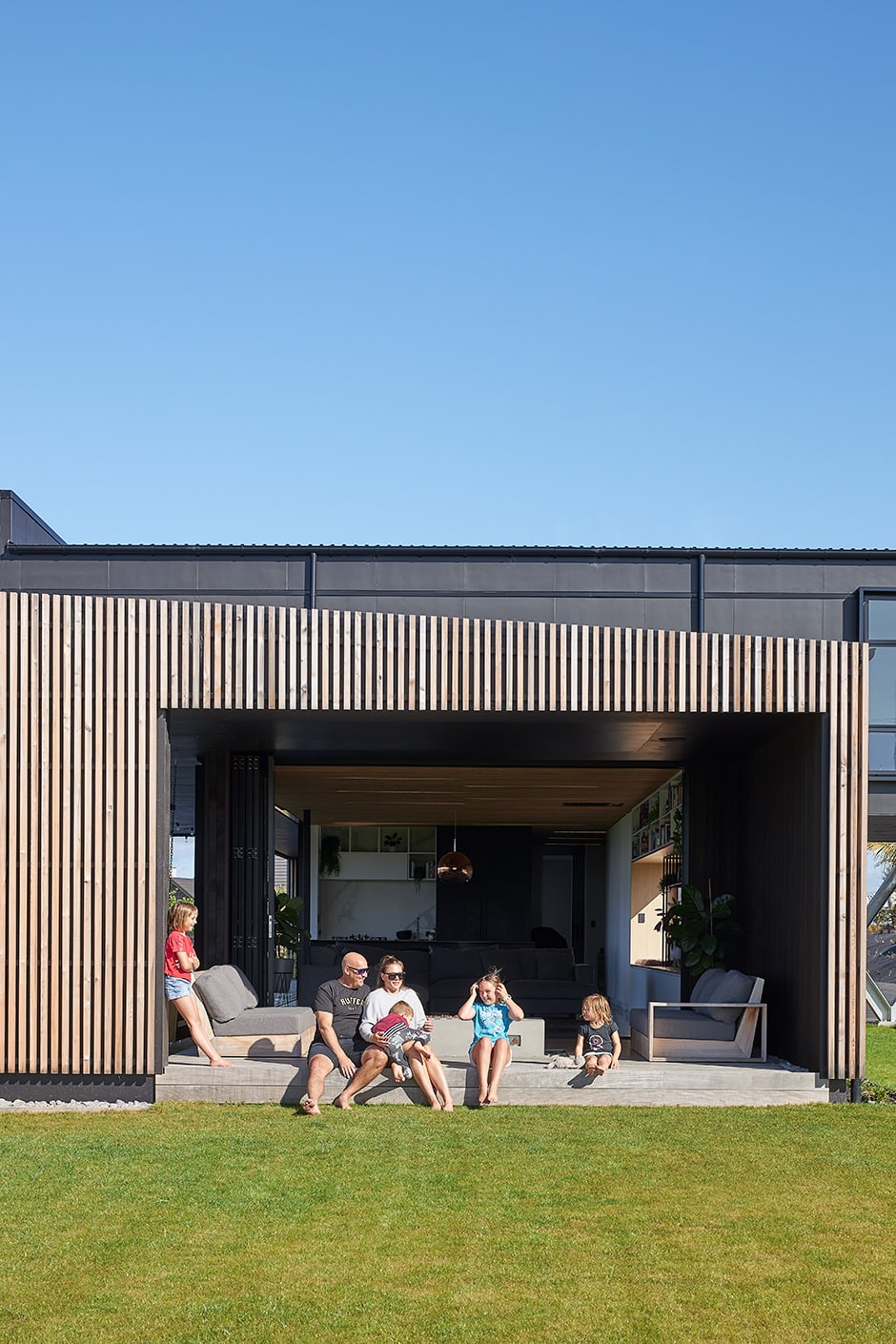 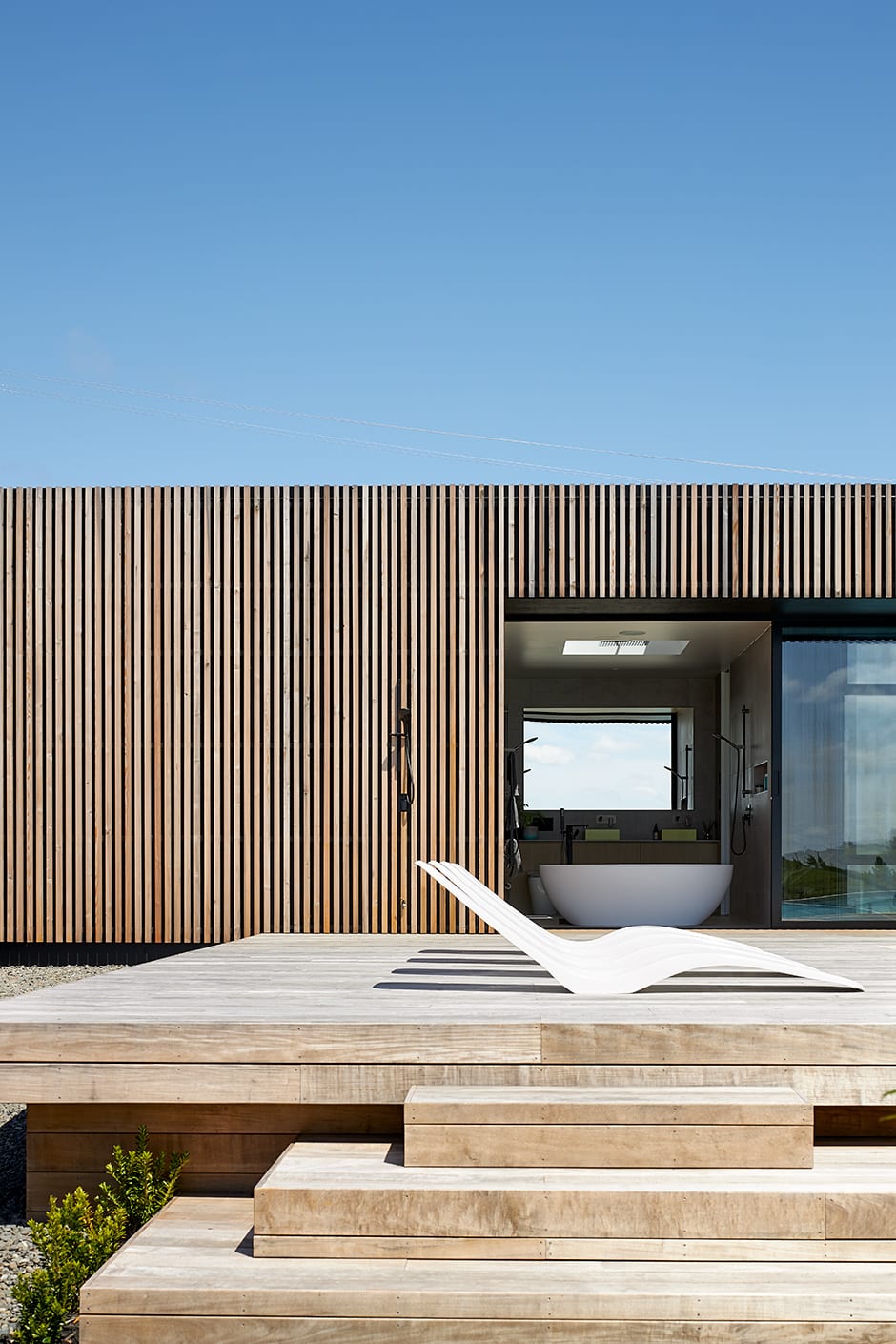 ABOVE Multiple outdoor living areas can be enjoyed by the whole family all day long, whether they’re eating al fresco, kicking a ball around, or taking time out on the sun loungers custom-made by Fibreglass Developments.

Interconnectedness was a key consideration that allows the kids to roam inside and out, and Kylie and Noel to keep an eye on them from wherever they are. APL Architectural Series sliding doors with a fixed window at one end span the communal zone, allowing the entire space to be opened up to the deck and lawn. At the end of the living area, a covered deck extends toward the west — the ideal spot for a sundowner. The couple’s bedroom and ensuite make use of First Windows & Doors Metro Series over-the-wall sliding doors to access the pool and take in the sweeping 180-degree view across the city to Mt Te Aroha beyond.
“We didn’t want any walls because we didn’t want anyone to be left out anywhere,” says Kylie. “So whether you’re in the kitchen or the lounge or out on the deck, you’re never far away from everyone else. With four kids, we’re really thankful for the massive backyard too. That was a huge thing for me. I wanted the kids to be able to be kids — to ride their bikes and do whatever they want outside and for us to know they’re safe.” 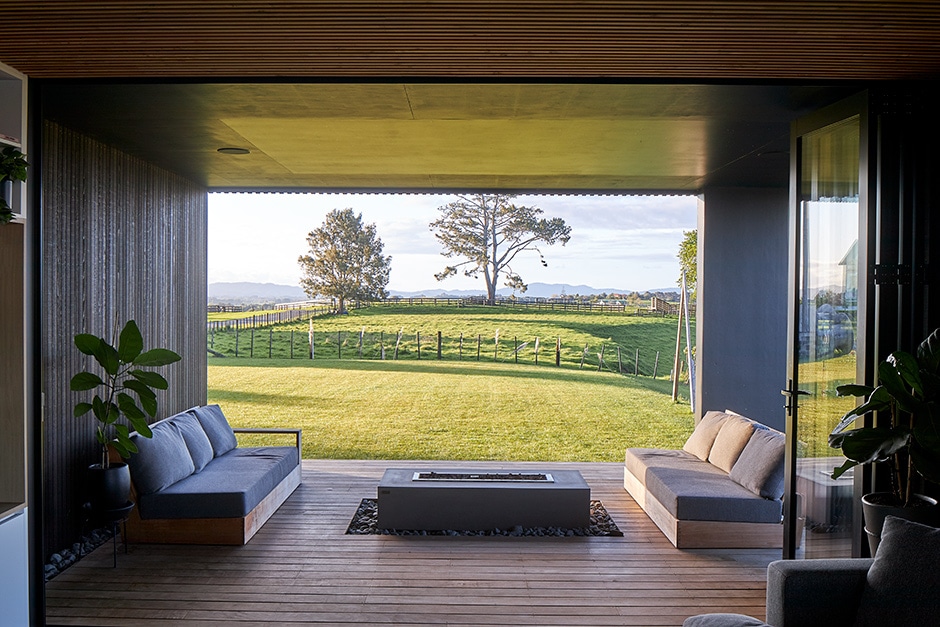 ABOVE At the western end of the house, Metro Series bi-fold doors connect the living area to a deck that catches the last of the day’s rays. The kids like to toast marshmallows over the concrete fire pit that sits between Kuba outdoor sofas from Design Warehouse. Cedar panelling finished with Dryden WoodOil shelters this space from the wind, making it ideal for cosy evening downtime.

“On the practical side of things, the flexibility to increase the size of the spaces here is great for accommodating a large family in not a large house,” says Noel. Their ability to expand and contract different areas to allow inside and out to function together works well for both the family’s everyday life and the regular stream of visitors who drop by to soak up some of the rural good vibes.
firstwindows.co.nz/brain-boxes 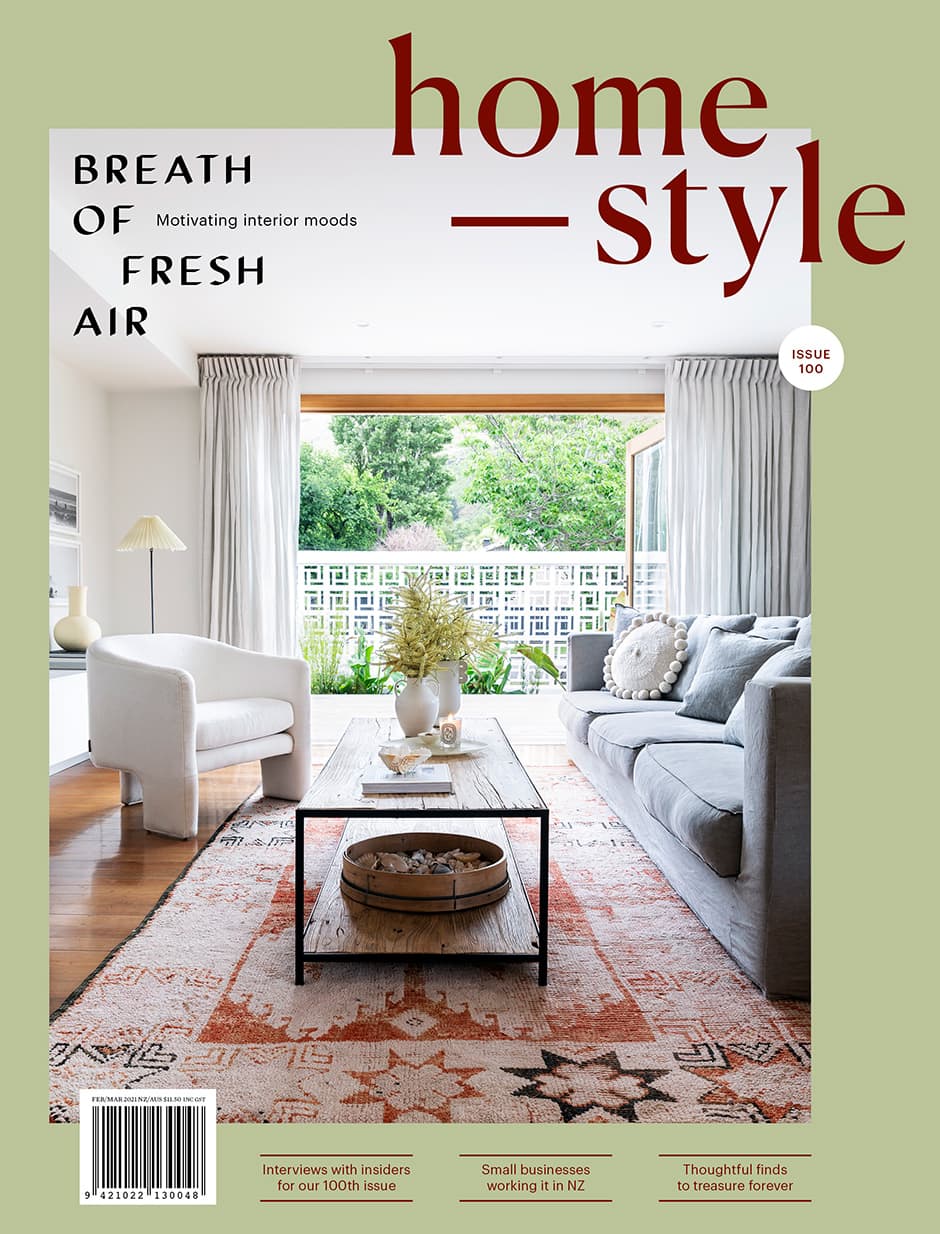 Our Feb/Mar 2021 issue is on sale now at good retailers nationwide.

A closer look at the living room that features on