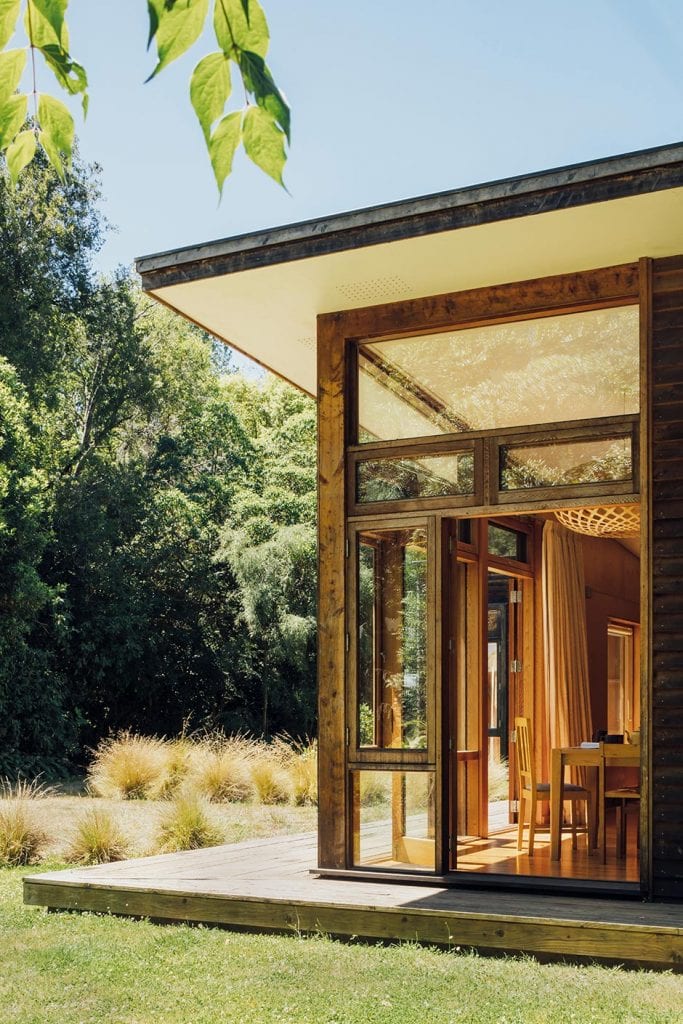 In a clearing surrounded by trees, this holiday home in a picturesque bay in Te Pātaka o Rākaihautū/Banks Peninsula seems to rewind time. There are none of the accoutrements that tend to accompany today’s summer- vacation stations. No boat parked in the drive. No pool to cool off in. No outdoor room beneath a cantilevered roof. This is, purely and simply, essential territory. The luxury is in the freedom.

The owners bought this property in 2005 as somewhere to embrace the polar opposite of their urban existence in Ōtautahi/Christchurch. Here, at the base of the valley, among farms where sheep, cattle and horses roam the endless tawny hills, they found an old weatherboard cottage and some rumpty outbuildings on an acre of land. They set about disestablishing the manicured garden and concrete pathways that surrounded the house, planted tussocks to punctuate the lawn and let nature take its course.
Five years later, when they asked their son and daughter-in-law, architects Hamish Peddie of Wilkie & Bruce Architects and Jane Peddie of JHA, to extend the dwelling, there was a surprise in store. As Jane remembers, “The earthquakes had shaken the classic cottage off its foundations.” Time for Plan B. 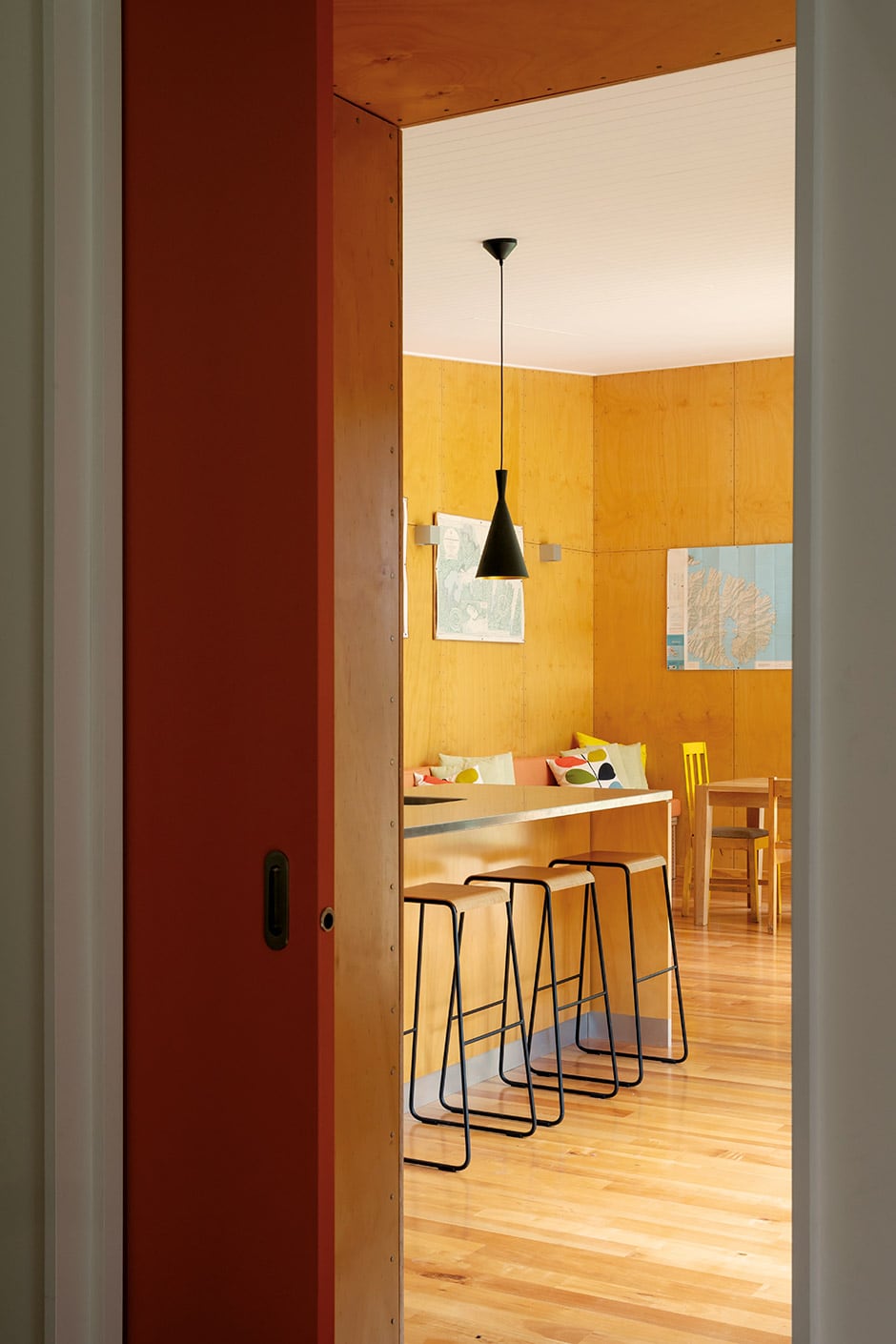 There was little need for a brief on this new build; Hamish and Jane had holidayed with family many times, so had an intuitive understanding of the requirements. “It needed to be something basic that made reference to the tramping-hut aesthetic, and to the farm sheds and shearing buildings around it,” says Jane.
In this respect, the choice of macrocarpa cladding was genius. “We liked that it’s a timber sustainably grown in New Zealand and doesn’t need to be treated,” says Jane. The weathered-off horizontal boards have a rusticated appearance fitting for this rural enclave, and a linking volume wrapped in black corrugated steel amplifies the agricultural allusion. 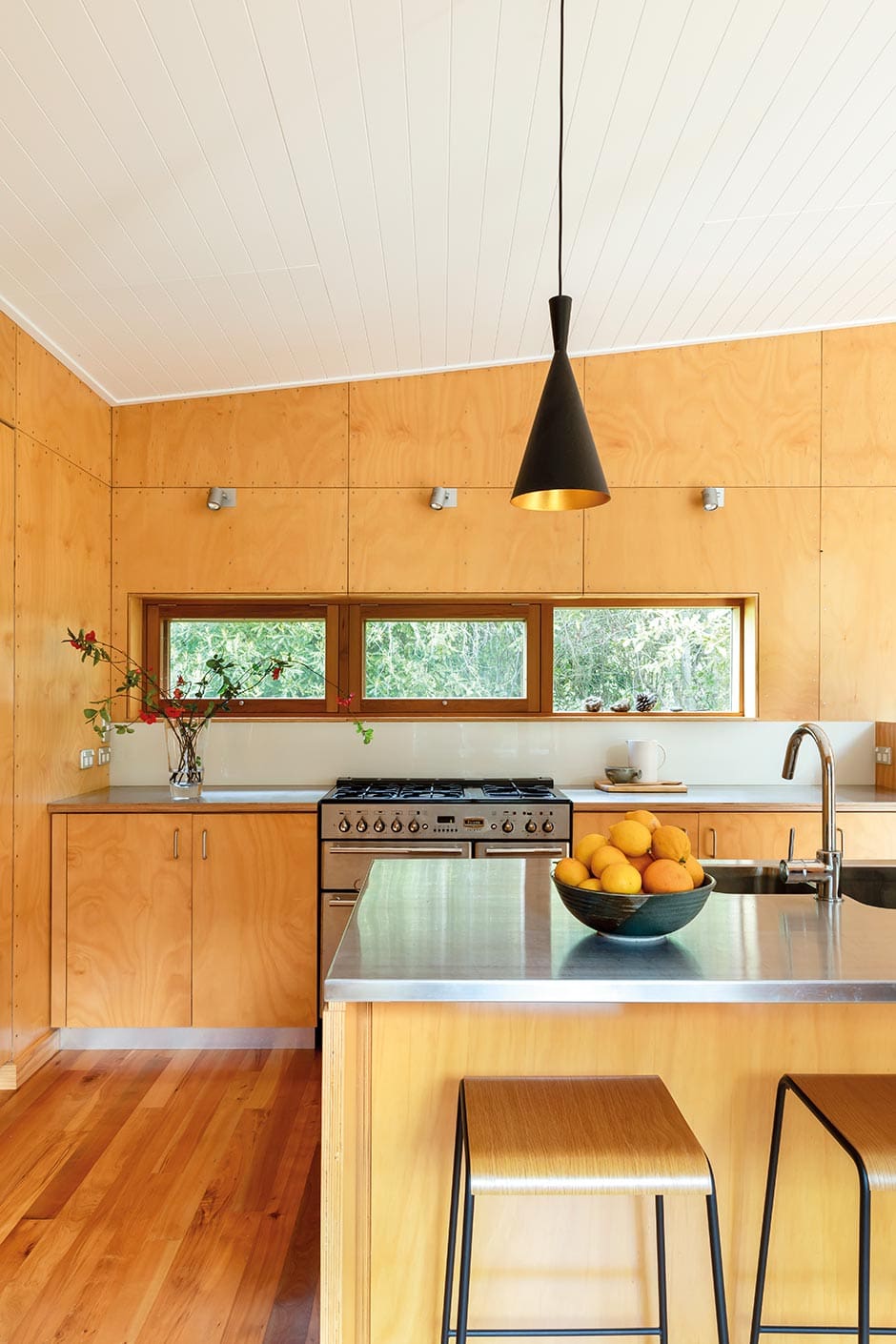 Hamish is one of five siblings, so designing for the multi-generational experience was key. With a larger footprint, this might mean two separate living rooms; with 150m2 to work with, that was not an option. Instead, there are two mono-pitched pavilions linked by an entrance hall with a laundry in a cupboard off to the side. One pavilion contains the dining room and kitchen, another the living room. Three small bedrooms are tucked in behind.

The kitchen, where members of the younger generation like to make pancakes with their grandfather in the mornings, is the command deck on this mothership. An industrial-size oven and a generous fridge/freezer were imperative. These team with bulletproof stainless-steel benches and plywood cabinetry that melds with the wall panelling used throughout the home.
“The plywood harks back to the tramping hut and also serves a structural purpose,” explains Jane. At the time of building, memories of the way plasterboard cracked in the earthquakes were still fresh. Plywood panels act as bracing but also have some natural give. 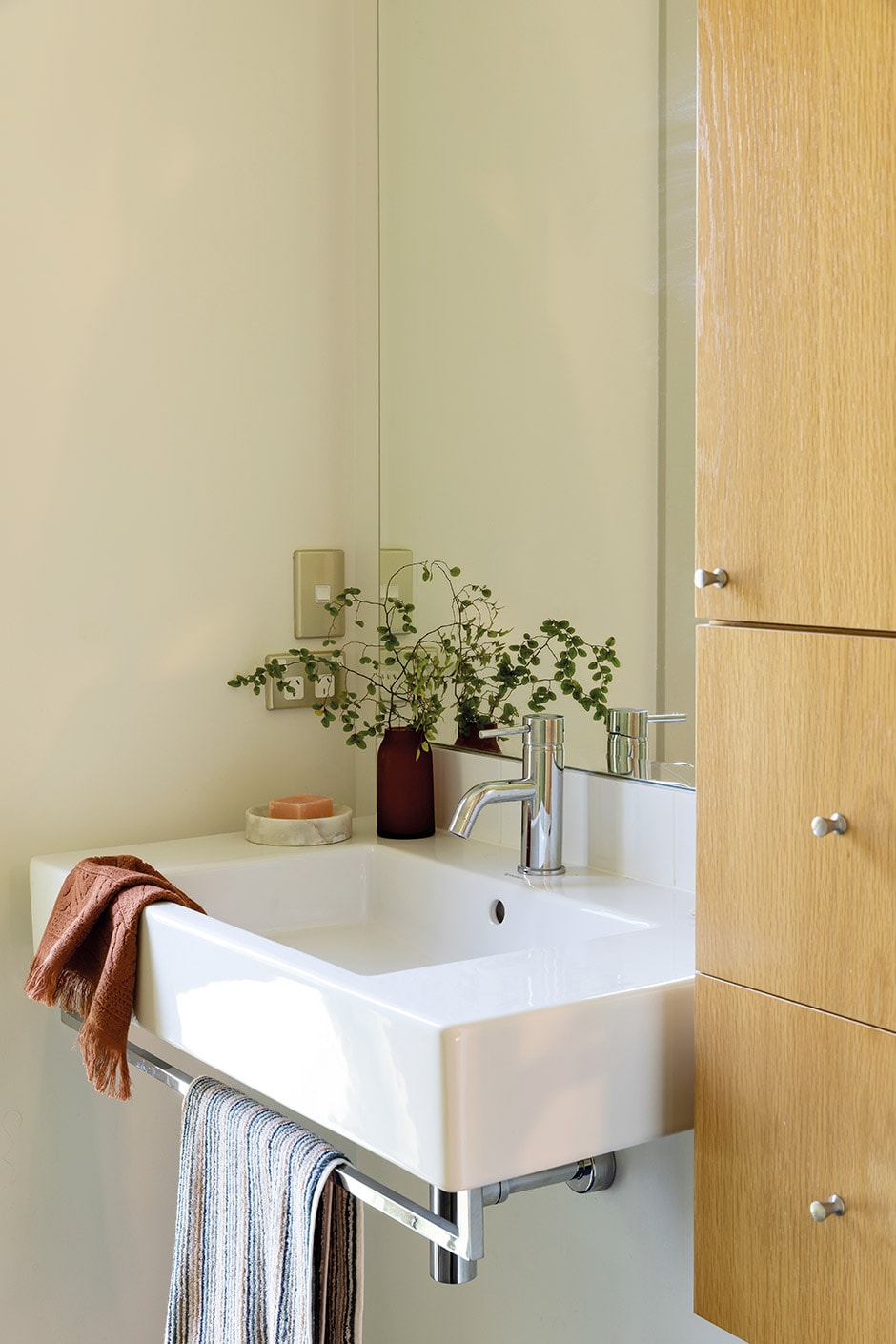 Over in the living room, the woodburner is backed by a concrete trombe wall that holds and disperses the heat. The fireplace is a novelty for Hamish and Jane’s two pre-teen daughters, who on winter afternoons like to lie on the rug on the silver beech floors, playing games or simply watching the flick of the flames, while across in the kitchen their grandmother bakes her famous self-saucing lemon delicious pudding.
The separate-but-together layout of this house ties in perfectly with days spent suspended in time — those rare but precious periods when the hours seem to slow. The morning sun spilling into the living room is temptation enough to be drawn into the day, and the line-up of found objects on the kitchen windowsill is testament to the myriad mini adventures to be had here. The children enjoy exploring the hills, building huts and dragging the dinghy out of the shed to join Grandad on the water. Sometimes a picnic on the edge of the lawn bisects all this activity: three generations gathered beneath the trees, plump kererū swooping above. 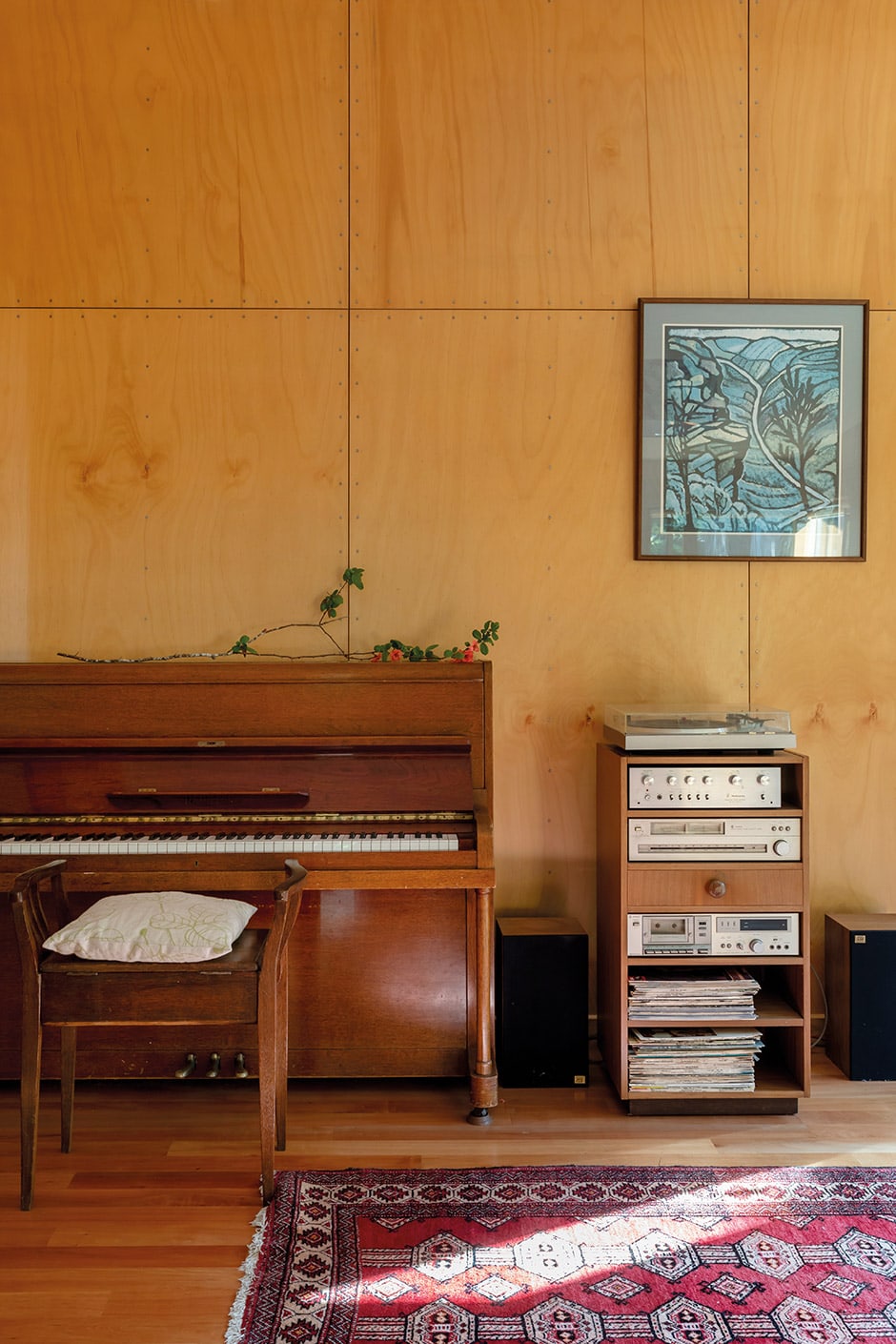 This lazy grazing is back-to-basics fun, nostalgia happening in the here and now. Family members who turn up on a whim are accommodated somehow — once the bedrooms are taken, there’s ample space outside for a tent, plus the built-in bench seats in the dining zone pull out to become to single beds.
Double glazing aside, if it gets a little chilly indoors, there’s always another blanket. “As much as they could, my in-laws wanted to reduce the operational energy of the house,” says Jane. Water is harvested from the roof and there’s the option for solar.

When the sun starts to disappear behind the hills, the dwelling becomes a magnet. Large windows in the dining room capture the last of the rays as everyone clusters around the table on chairs Jane’s mother-in-law made in a woodwork class. There are vague plans to replace the painted yellow dining chairs left behind by the property’s previous owners with something new, but what’s the hurry? Out here, there’s always another day. 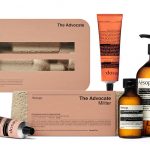 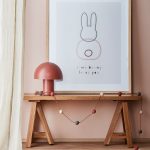 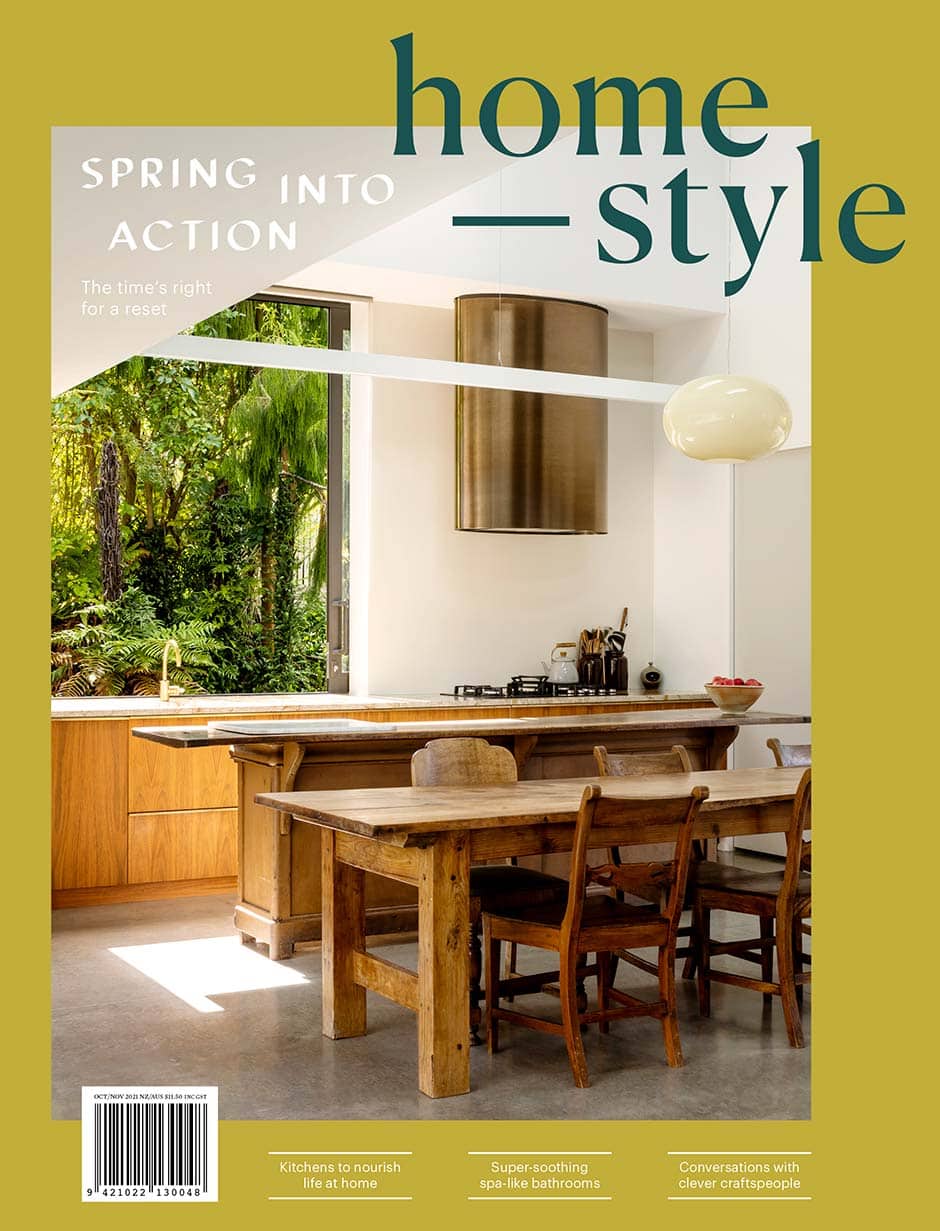