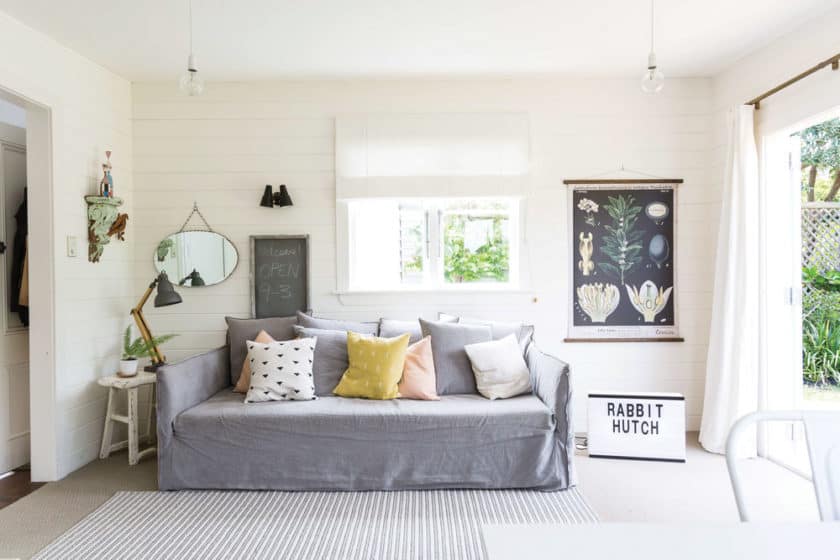 The creative force behind Father Rabbit, Claudia Zinzan  shares her renovation story – one that was guided by the classic, understated ethos that her business is known for.

I guess a Grey Lynn villa isn’t your typical first home. But this one had been split into two flats in the 60s, so we’ve had someone helping out with the mortgage the whole time we’ve been here. Regardless, it has still been a stretch financially at times – meaning the refurbishment has taken place at a relaxed pace.

We were never in a position to do the ‘dream’ renovation, so we made the decision that we would live in the back flat, and it would be up to the next owner if they wanted to do the major restoration needed to return the split property back to one grand villa. 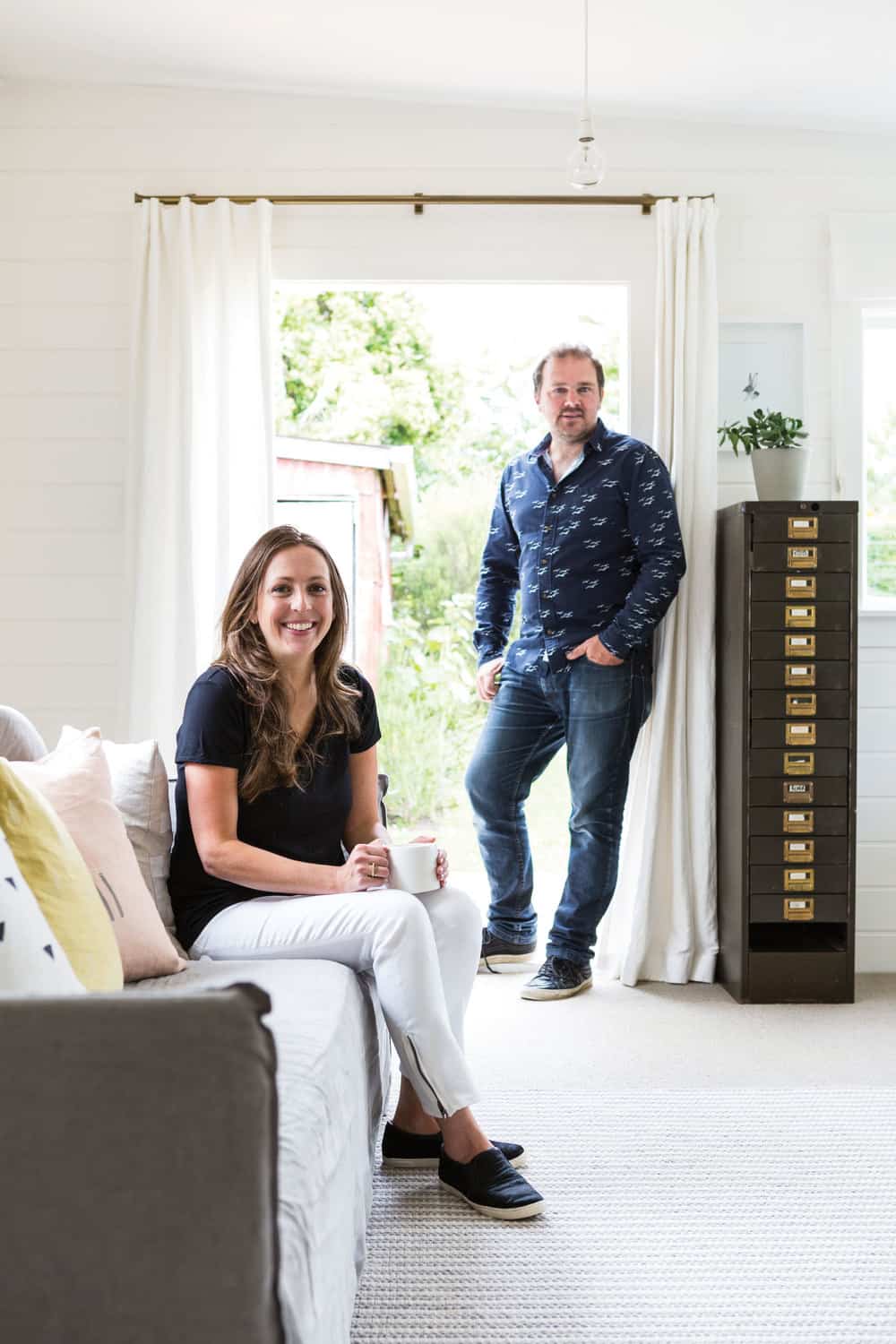 So we focused on making our changes authentic, with simple timeless touches, rather than a half-hearted attempt at a huge modern renovation that we could ill afford. We asked ourselves some hard questions based around our budget: What could we do that would make sense stylistically, and make it a lovely place to be, but was realistic within our budget constraints?

The answers ruled out anything structural. But the basic 60s lean-to that formed our living and dining area wasn’t the most beautiful addition, so we re-lined it with 135mm horizontal match lining to give it some character, and more of a stylistic connection to the original home. The result is similar to what an old villa laundry’s walls would be like.
This soft and subtle approach began to dictate how we treated the other areas in the house. I approached styling decisions by asking myself what my grandfather – who has a strong Father Rabbit-ness about him – would have done. What would he have built back in the 50s that is practical, classic and really well executed?

I bought a set of twin wall lamps off TradeMe, as they were reminiscent of the lights in my grandfather’s bach at Clarks Beach. The old mantel supports can often be found at old demolition yards. They are used to display ornaments, and also look amazing in super-modern homes as a wall feature. The blinds and curtains are a soft white linen from Martha’s Fabrics. For the header of the curtains, I used a standard pencil pleat tape but didn’t pull the gather string. The washed-grey Source Mondial rug and Joe Sofa are from Father Rabbit, with Caroline Z Hurley cushions added in similar muted tones. 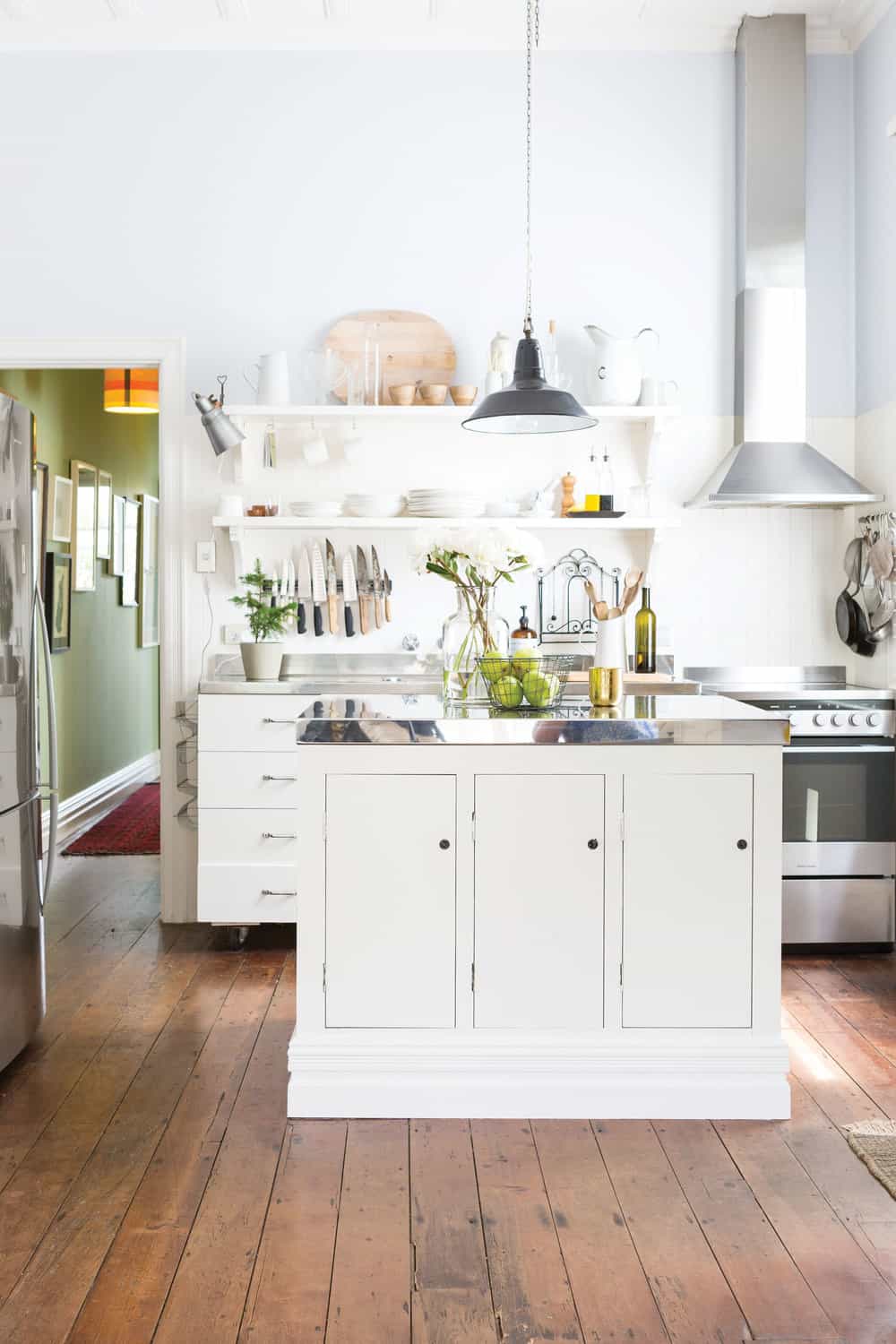 We weren’t putting in a temporary solution here, but we also weren’t overdoing it with a fancy bespoke modern fit-out. We compromised to a level where we ended up with a lovely democratic update that made sense to us. It wasn’t too over-the-top should the next owner want to pull it out and replace it with a $100,000 version. It was about doing that ‘in-between’ update that satisfied two visual creatives who love nice things and nice spaces, that wasn’t wasting money by over-capitalising, and at the same time gave us a lovely place to gather around and cook together. The result is functional, compact and full of character. We painted the room in Aalto Umpire. Then we lined behind the bench and oven with vertical tongue-and-groove. The shelves were made out of MDF stair treads, and our builder cut an old-style bracket shape out of MDF to make the supports. We made our own island bench and had the stainless steel top put in. It has dear little cupboards on one side, while the other side houses our dishwasher. 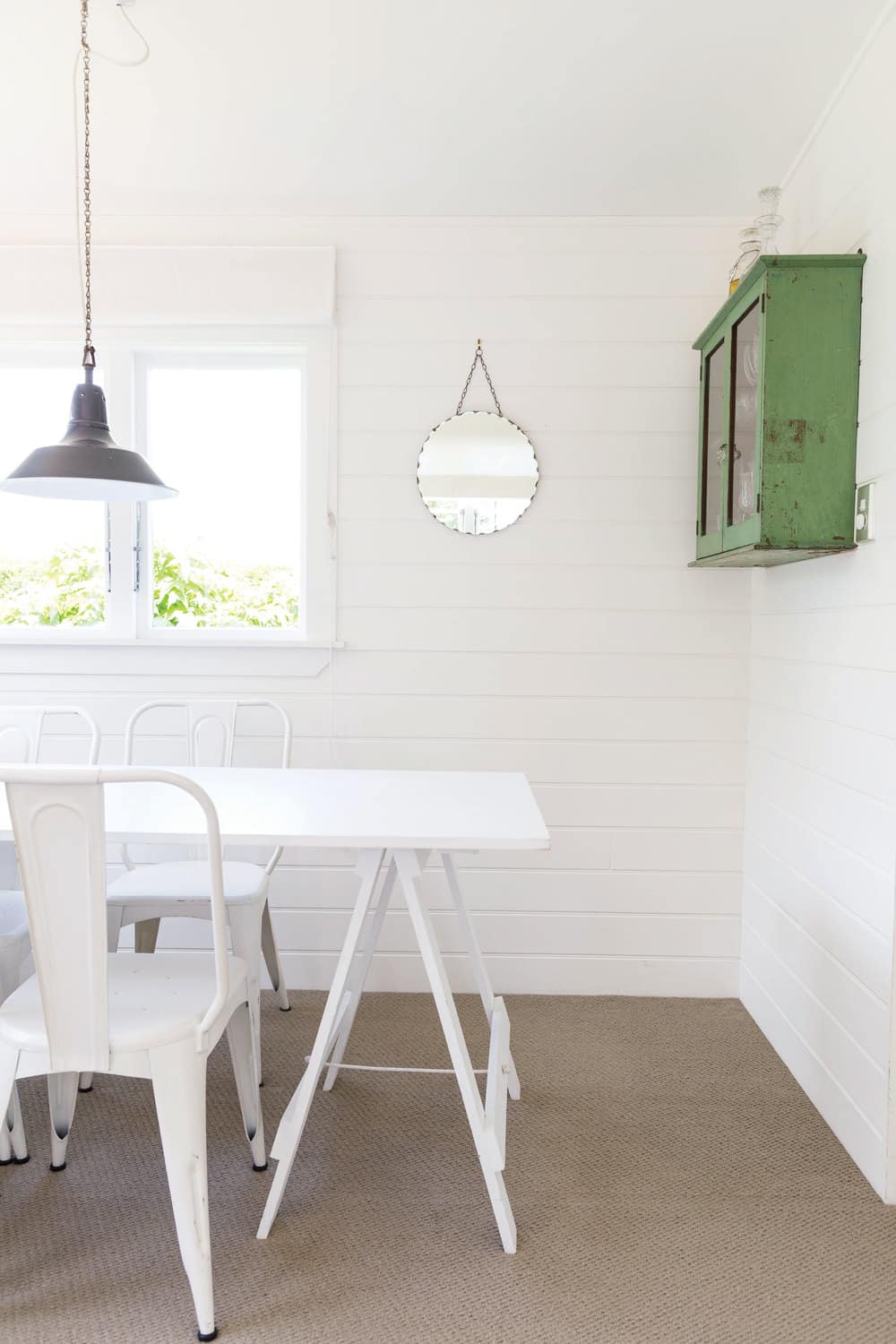 My husband Nick made his own painted white trestle tables and used tongue-and-groove floorboards for the top. We found the green wall cabinet on TradeMe years ago, and it makes the perfect vessel in which to stash glassware for an after-dinner drink. The industrial antique French lamp shades work well with the cabinet, and finishes the room off perfectly.

Our kids share a small room, so we keep it free of toys and clutter. Instead, we simply treat it as a restful sleeping space for a five-year-old boy and a one-year-old girl. There is a strong rabbit theme going on in the kids’ room – and not by our hand. Everybody else buys them rabbits! The room is painted in Aalto Florin, and we chose to add muslin curtains to soften the incoming light, while maintaining privacy. 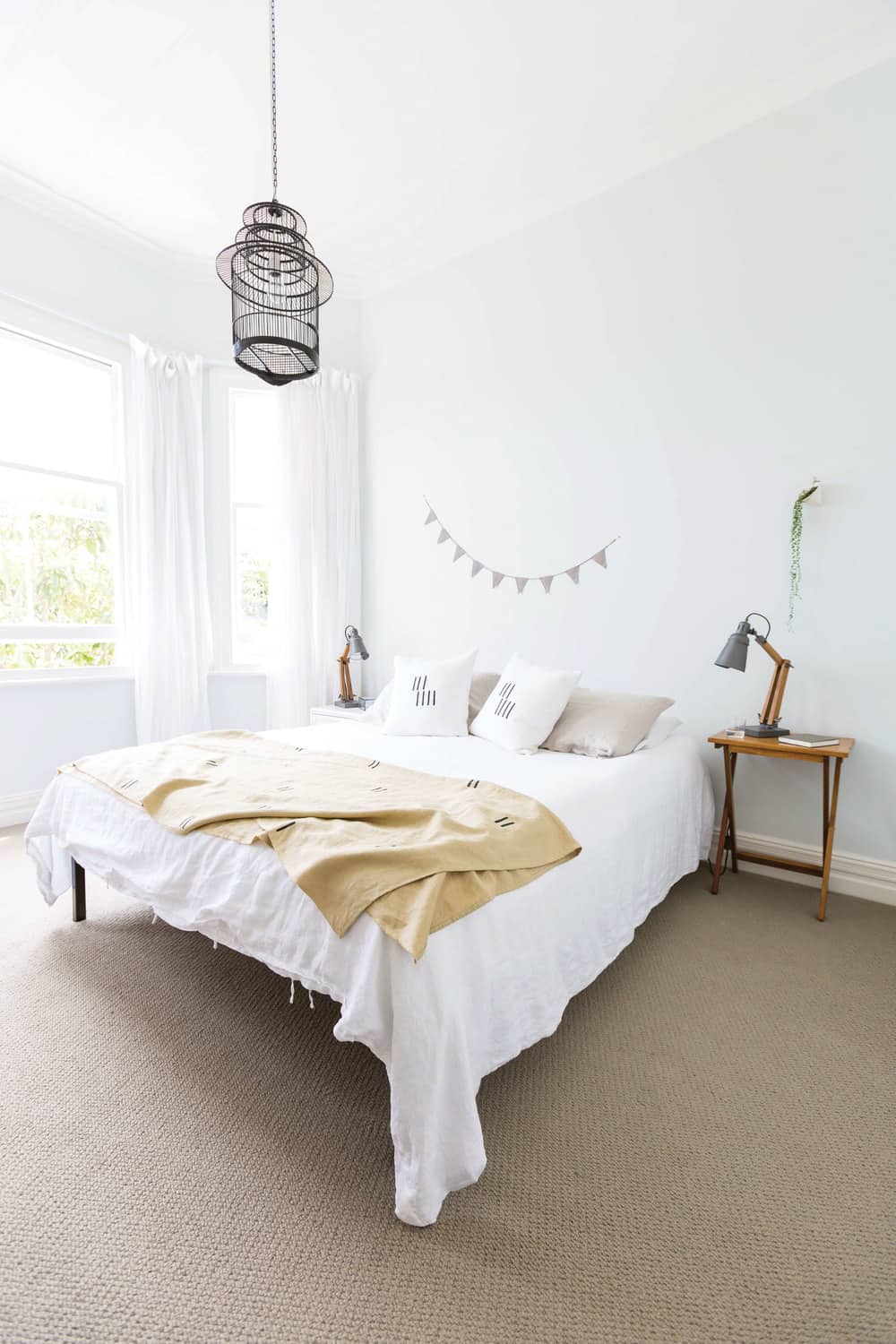 TOP A restful vibe is conveyed in the master bedroom with linen from Nest and a velvet Pea cushion from Kip & Co. MIDDLE The monochromatic design accents here include Native wallpaper by Ferm Living from Paper Room, a Cross blanket by Jamie Kay and
a Hello print by Miniwilla. Handily set on castor wheels, the chest of drawers is from Meluka, while the Sparrow cot is from Nature Baby. ABOVE Sofia’s Harlequin wallpaper is also by Ferm Living from Paper Room. A Dreaming of Horses & Stars duvet set by Burrow & Be teams with Star cushions from Little Lights Co. The Dandelion rug is by Armadillo & Co from The Ivy House, with a Valentine floor cushion by Little Connoisseur.

A place to Rest

We have a strict no TV or computer rule in our bedroom. It is very restful and calming, painted in Aalto Half Division. We found the birdcage years ago at Redcurrent and fashioned it into a pendant light shade. We keep the room clutter-free with large inbuilt cupboards, so only the essentials are needed by the bed. You can really get creative when it comes to bedsides – an old fold-out table, stool or even an armchair can work when mismatched in an odd pair. We keep our linen white and mix in pillowcases in various shades, adding a Caroline Hurley throw at the end of the bed. 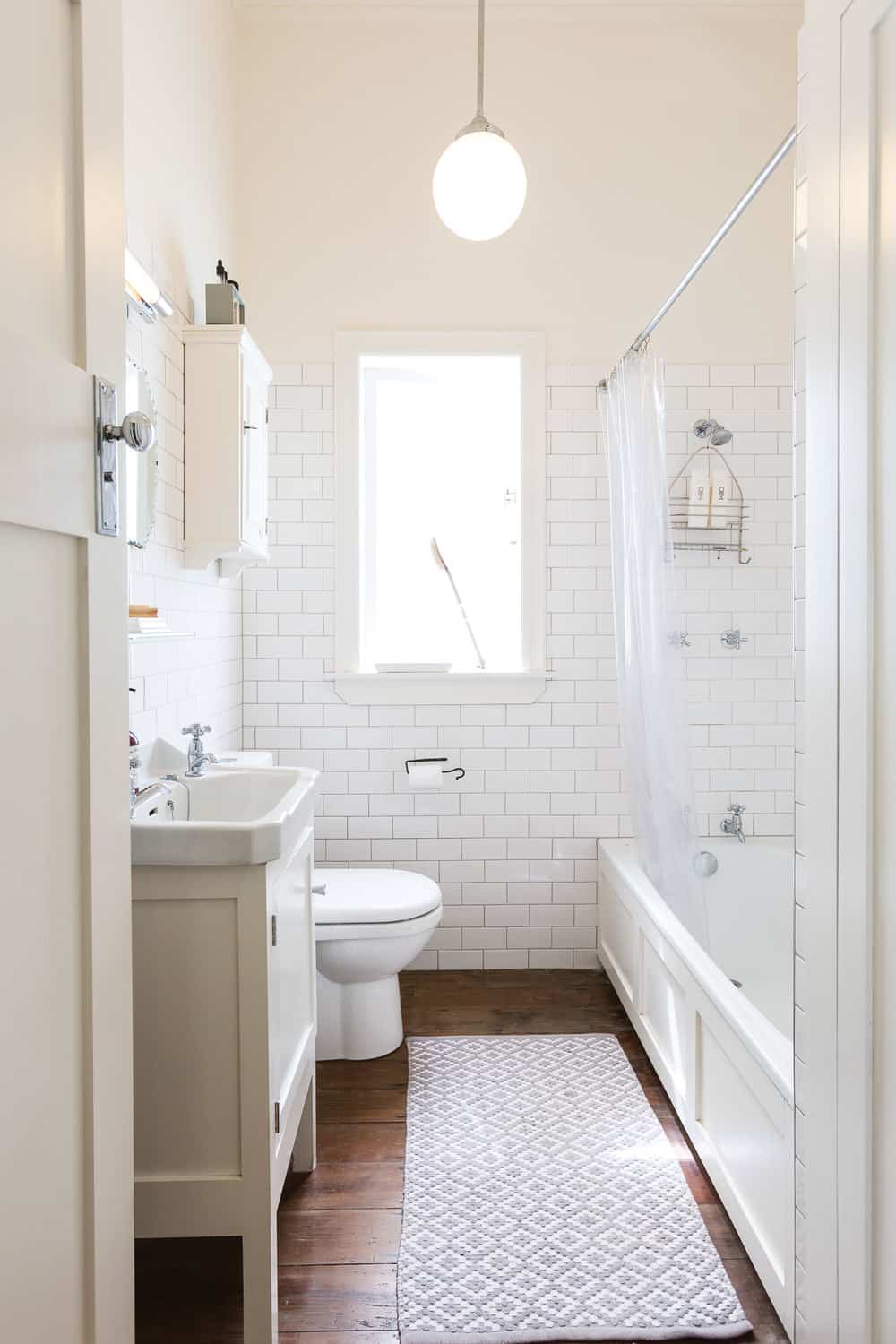 Ours is a small bathroom, but I wanted it to have personality – so I splashed out on butchers’ brick tiling. I made sure we got the smallest size and we kept the tile grouting as small as possible. This is one thing I notice when it’s done badly; when tilers do the biggest grout gap because the homeowner doesn’t know to specify a small gap to keep it looking sharp. The wall light, mirror and old basin were all bargain buys off TradeMe (including the taps), and Nick built a little wooden unit under the basin for storage. 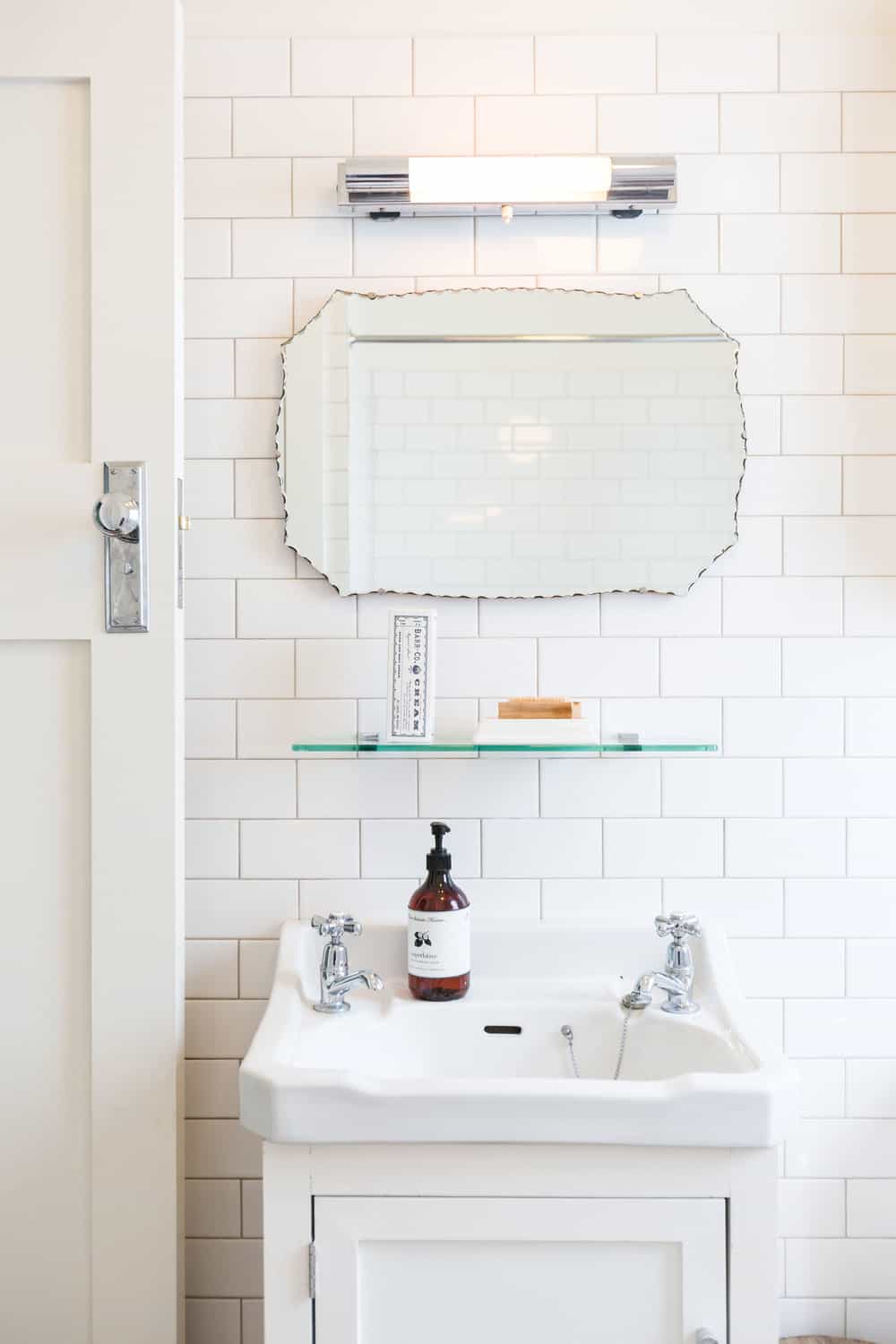 I used to be a colour consultant for Aalto Colour – I love the way their paints are multi-pigmented and have such a complexity and depth to the shades. I adore the subtle changes in our pastel colour palette. I have a deep love affair with pea green, and our hallway was the perfect place to splash a little bit of that around. It is in an Aalto Custom Colour, called, of course, Zinzan Hall. The colours were done five years ago – and I still love them as much today as I did then. 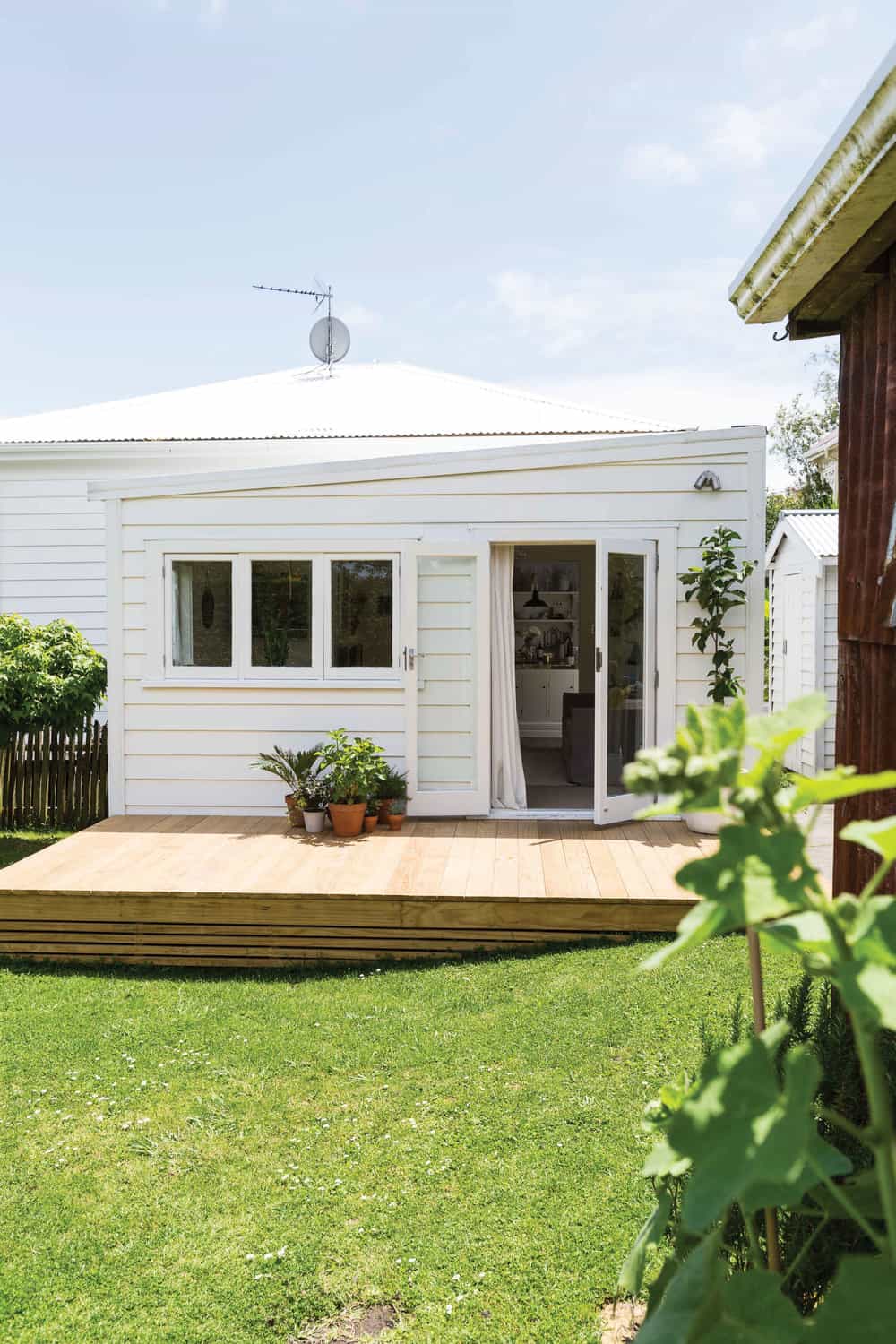