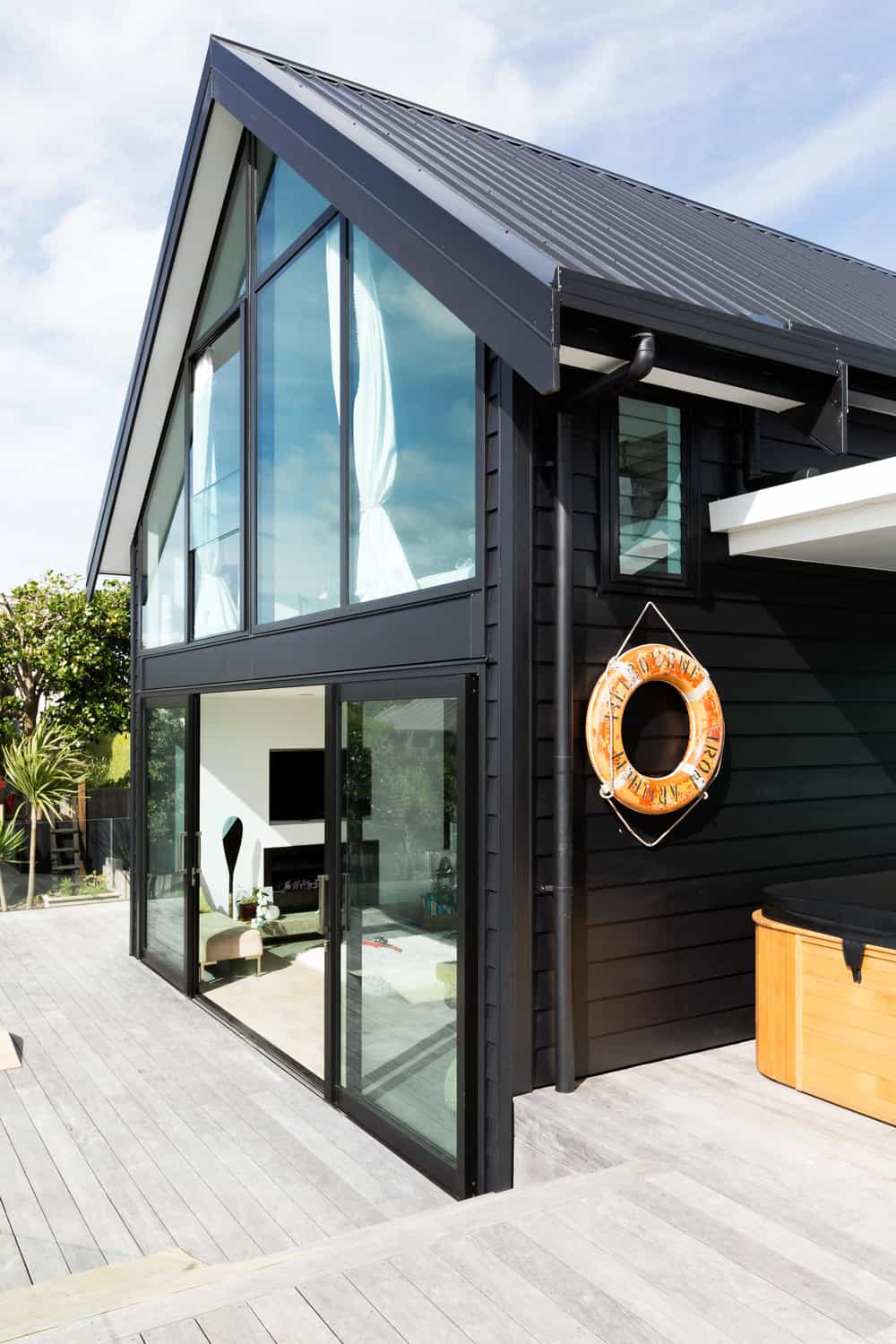 The original kiwi bach has gone, but its relaxed atmosphere is still alive and well inside the architecturally-designed home that replaced it.

When Andrew and Katie Graham bought their Stanmore Bay beachside section on the Whangaparaoa Peninsula, the land came with a small Kiwi bach. Seven years later an impressive, architecturally designed house stands where that bach once was – yet it has a distinctive holiday-home feel inside.

Andrew built the new house single-handedly. But despite being a builder by trade, there was a full year of planning to do, working alongside architect Chris Tate – with a further eleven months of building after that. “We thought long and hard about every aspect of the design in order to avoid changes during the building process,” explains Andrew, who all too often sees people making costly changes mid-project.

Andrew and Katie’s design brief was to have a home focused around family, incorporating seamless indoor-outdoor flow, with large decks for entertaining and to promote the uninterrupted views over the Hibiscus Coast. The final design concept encompassed two boat-shed style gables, one at either end of the house, and an adjoining living pavilion, complete with an expansive sun-drenched, north-facing deck.

“Chris really took in every aspect of the property while he was planning the design. He ensured our views were captured from every room, and that every corner of the long site was utilised,” Katie says. “The deck is sheltered by both gables and the interior pavilion, making it perfect for year-round use of the outdoor fireplace.”

Although Andrew built the house, it was Katie who drove the look of the home’s interior, choosing to mix modern components with earthy, raw and industrial materials. “I wanted to bring the outside in,” she says, “so natural timbers feature heavily throughout – as do nautical, industrial and retro pieces. I want to have a home that reflects our love for the outdoors, so that every day we come home to a house that is filled with things you would find at a bach – like oars and fishing nets.”

During the build they took up residence at Katie’s parents’ house, living in a refurbished caravan parked in the front garden – no mean feat with two young
sons, Kody (6) and Karn (4).

But today the boys are pleased with their more expansive living quarters. Kody and Karn’s bedrooms are situated in one gable at the end of the house, and their rooms boast stunning views out over the Hibiscus Coast back towards Orewa, Red Beach and Stanmore Bay. Katie had custom blinds made to fit the 40-degree pitch of the windows, but they’ve fallen in love with the scene beyond the glass, so they haven’t hung them yet.

The boys’ bedrooms mirror each other, met in the middle by a kids’ lounge, featuring a vintage pinball machine. Located upstairs at the opposite gable end, taking advantage of the highest view-point, is the master bedroom. It is a private parents’ retreat where glass panels run the entire width and height of the room, ensuring the views are the focal point. The defined space in the ensuite next door has been maximised by introducing natural light via a skylight and using white on the walls and ceiling.

Linking the two gables is the north-facing central kitchen and dining zone, which opens up to the outdoor decks. It’s Katie’s favourite room in the house. “It’s the hub of the home where we cook, eat, entertain and socialise. It’s where the kids do their homework – and you have that incredible view.”

The self-proclaimed hoarders have collected retro accessories and furnishings, including a pair of vintage armchairs they have had re-upholstered. An up-cycled pallet has been given a new life by Andrew, cleverly made into an industrial-style coffee table. Found in opportunity and secondhand stores alike, these pieces have added some talking points to their contemporary family-focused home, while at the same time paying homage to the Kiwi bach that once stood here.