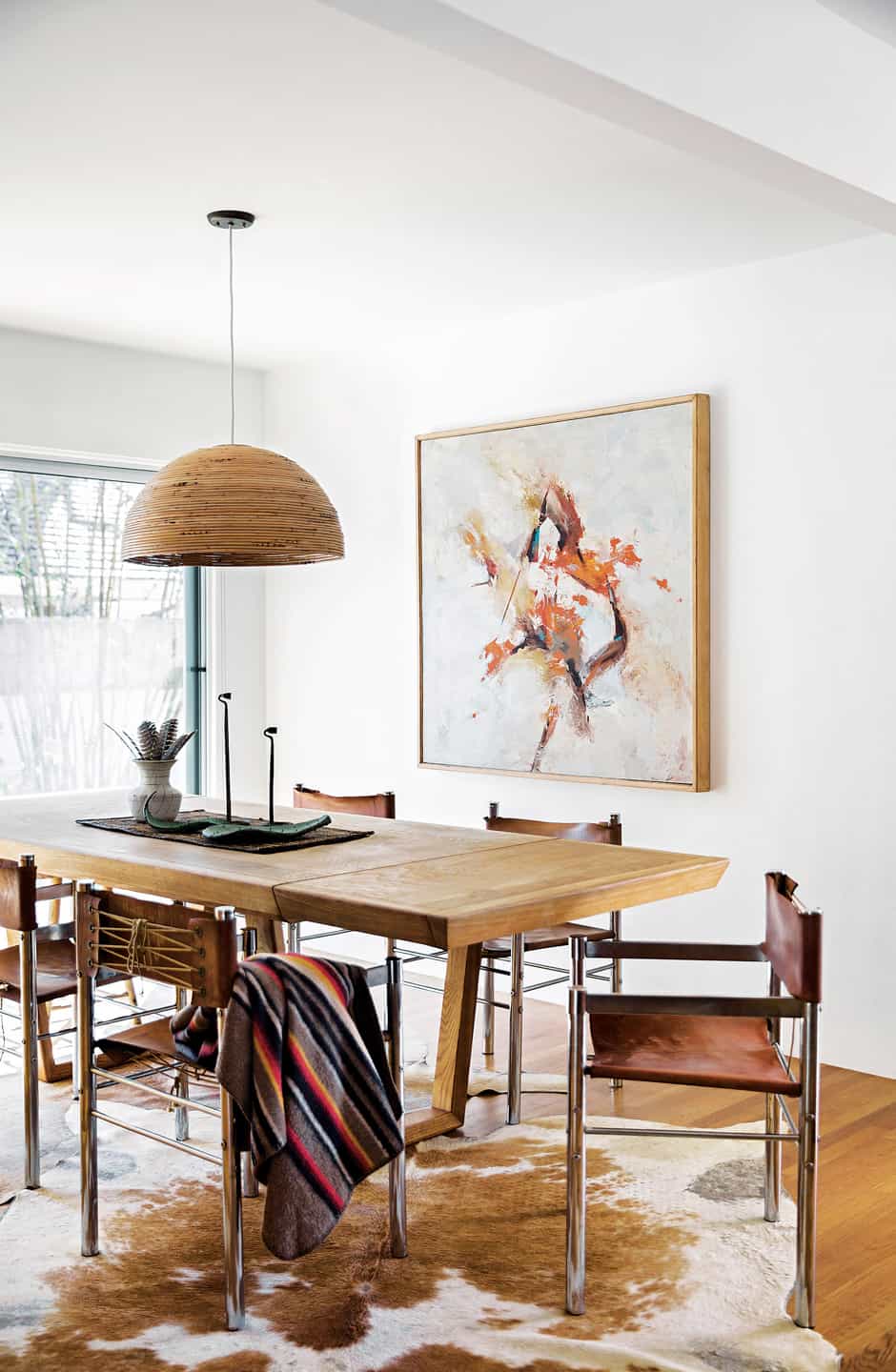 The more the merrier at this bohemian haven in Ojai, California – a footloose and fancy-free world unto itself.

The perfect wave – it’s the equivalent of the elusive Sasquatch to surfers. Tales of its existence are told as lore around bonfires. But die-hard riders, like American actor/interior designer Channon Roe, will chase these mythical swells to the ends of the earth and back, come hell or high water. He has dropped in on some of the best breaks in the world, from Hawaii’s North Shore to Raglan. But unfortunately for him – or rather, his lovely wife Bianca – one of his most epic rides, his first in Australia’s Byron Bay, did in fact involve high water… and hail, and frogs (yes, frogs). 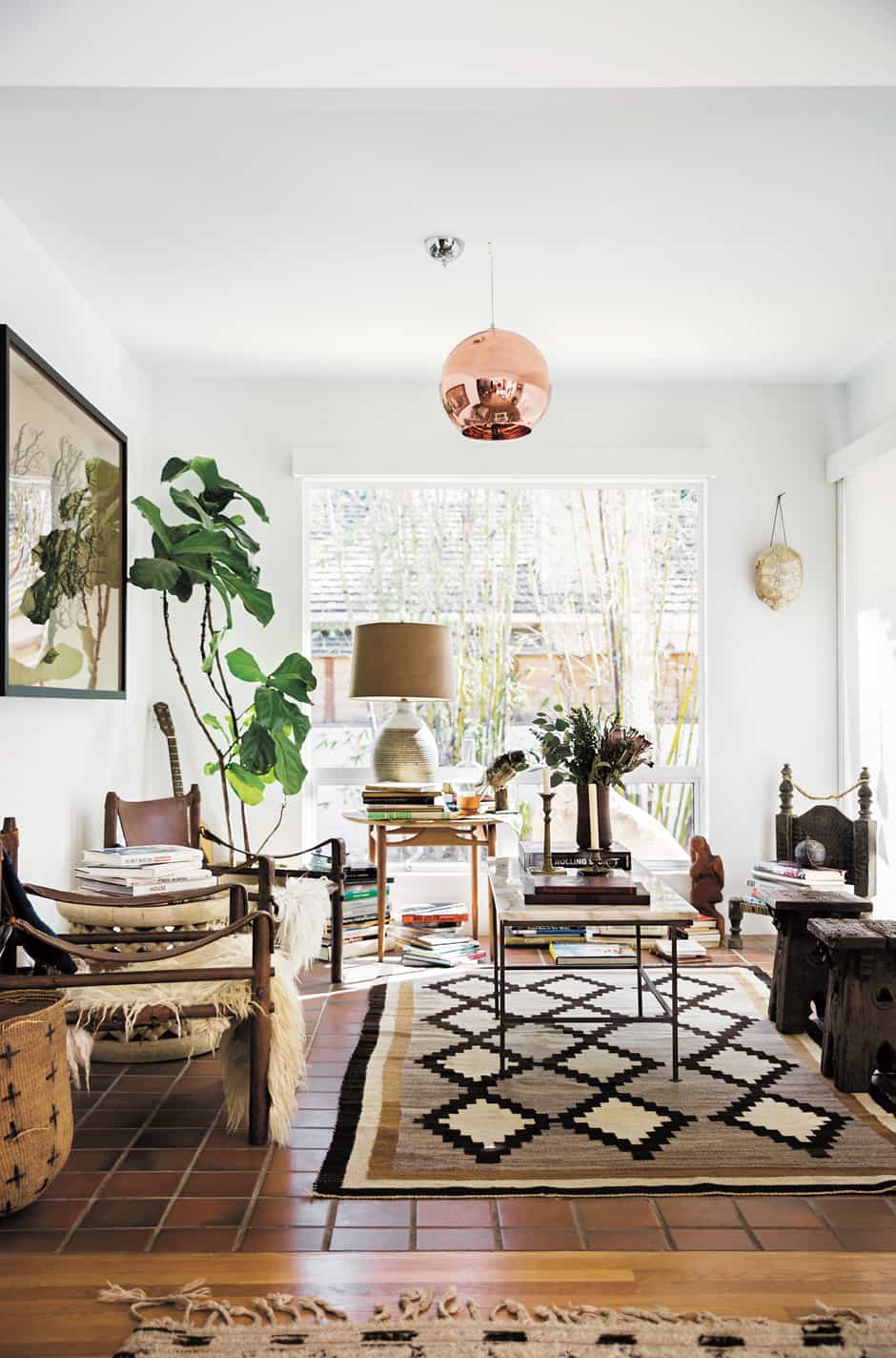 LIVING “They don’t make ’em like they used to” is an apt way to sum up Channon and Bianca’s beautiful collection of lived-in vintage furniture. Their overseas travels always end with the same question: “How are we going to get this home?” They lugged their set of 18th-century Basque church stools (pictured opposite) back from Biarritz, France.

It was Channon’s first trip to Australia with Bianca, who’s originally from Melbourne, and it was Christmas. After doing the rounds of family and friends, they strapped three surfboards to the roof of their tiny rental car and started the eight-hour trek from Sydney to Byron with Bianca at the wheel. They were so excited that they didn’t notice the rain turning to hail, or the miles of stopped traffic heading in the opposite direction. It wasn’t until it started raining frogs (a phenomenon that actually happens in Australia) that they pulled into a small beach town and realised they were driving directly into a cyclone.
After hunkering down for the night, they finally made it to their destination the next day, but much to Channon’s surprise, the place was empty. “I was out there almost by myself, and it was everything I wanted it to be,” he says. “Mother Nature can really make you work for the good ones.” 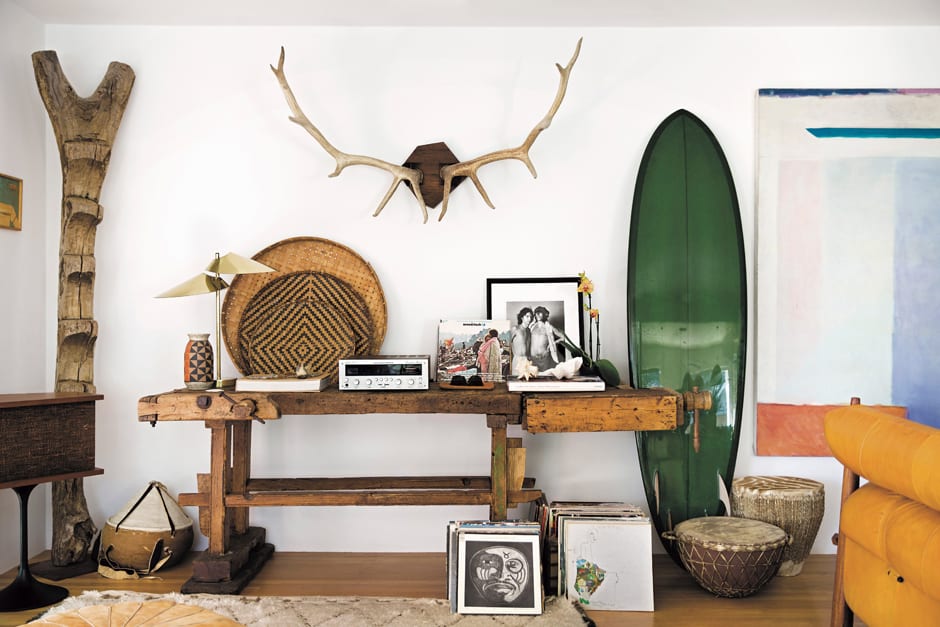 ABOVE The missing link in his collection, Channon’s green Chris Christenson C-bucket surfboard (“The perfect shape”) was a surprise gift from Bianca.

Channon has been in the water since before he could walk. He’s the product of a long line of riders and grew up during the heyday of Orange County’s surf scene in the mid-’70s and early ’80s. (He’s even named after one of his dad’s favourite local shapers, Channin Surfboards.) Any surf historian will tell you that this pocket of the coastline at that time – Corona del Mar, San Clemente, Newport Beach, Laguna – was a melting pot of beach culture with a burgeoning lifestyle scene. It was a moment, just like London in the ’60s.
“You had these die-hard surfers, who were basically rock stars, rolling up to the beach in fur coats and Porsches,” says Channon. “Then there were the artists and the shapers, the drug dealers and the swingers, the architects and the musicians. It was a wild time and definitely left a lasting impression.” 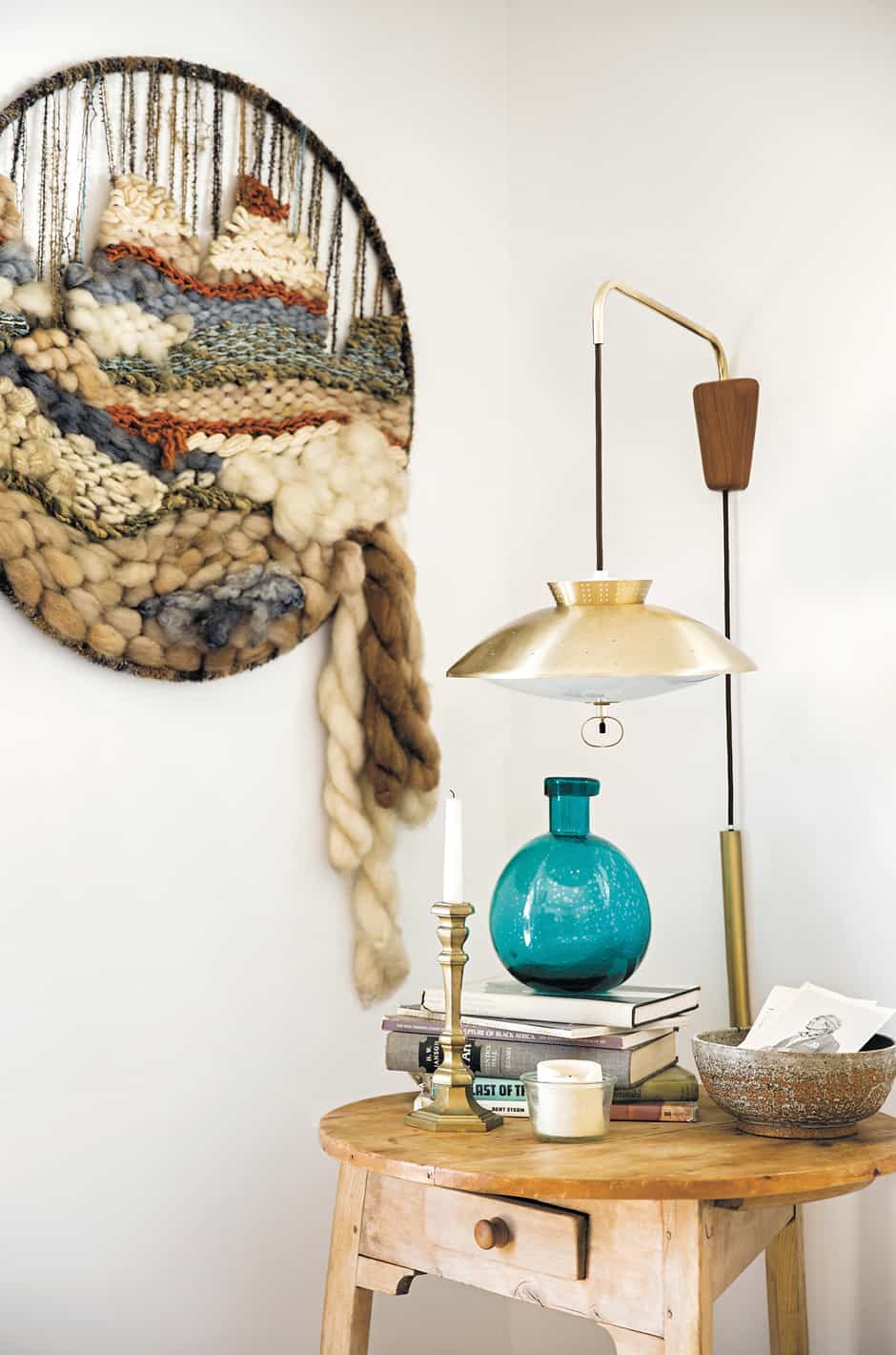 ABOVE This bedside vignette in the guest room includes an incredible woven wall hanging by Edith Zimmer.

It was this creative, outdoorsy, vagabond spirit that Channon and Bianca were after when, six years ago, they transitioned their second home in the hippy hideaway of Ojai into their primary one. “Moving was about getting back to the California I grew up in,” says Channon. In truth, it was also about giving his son Marlon a childhood similar to his own. Ojai is known for its rootsy surf community. Rincon, arguably one of the top five point breaks in the world, is 30 minutes away. So for Channon, it feels like Laguna in the ’80s – “minus the flash… and the drugs”.
What Channon and Bianca have created in Ojai, though, is not just a home, but more a mini-bohemian universe, of sorts. They have a 1976 Airstream trailer permanently parked in their front yard, which is part mad-scientist man cave where Channon tinkers away on his latest interior design projects, and part guest quarters. There’s a teepee behind their mid-century ranch house. And then there’s the shop, In the Field, a lifestyle store the couple opened in 2014 that stocks goods from local makers and friends, as well as treasures they’ve picked up on their travels. 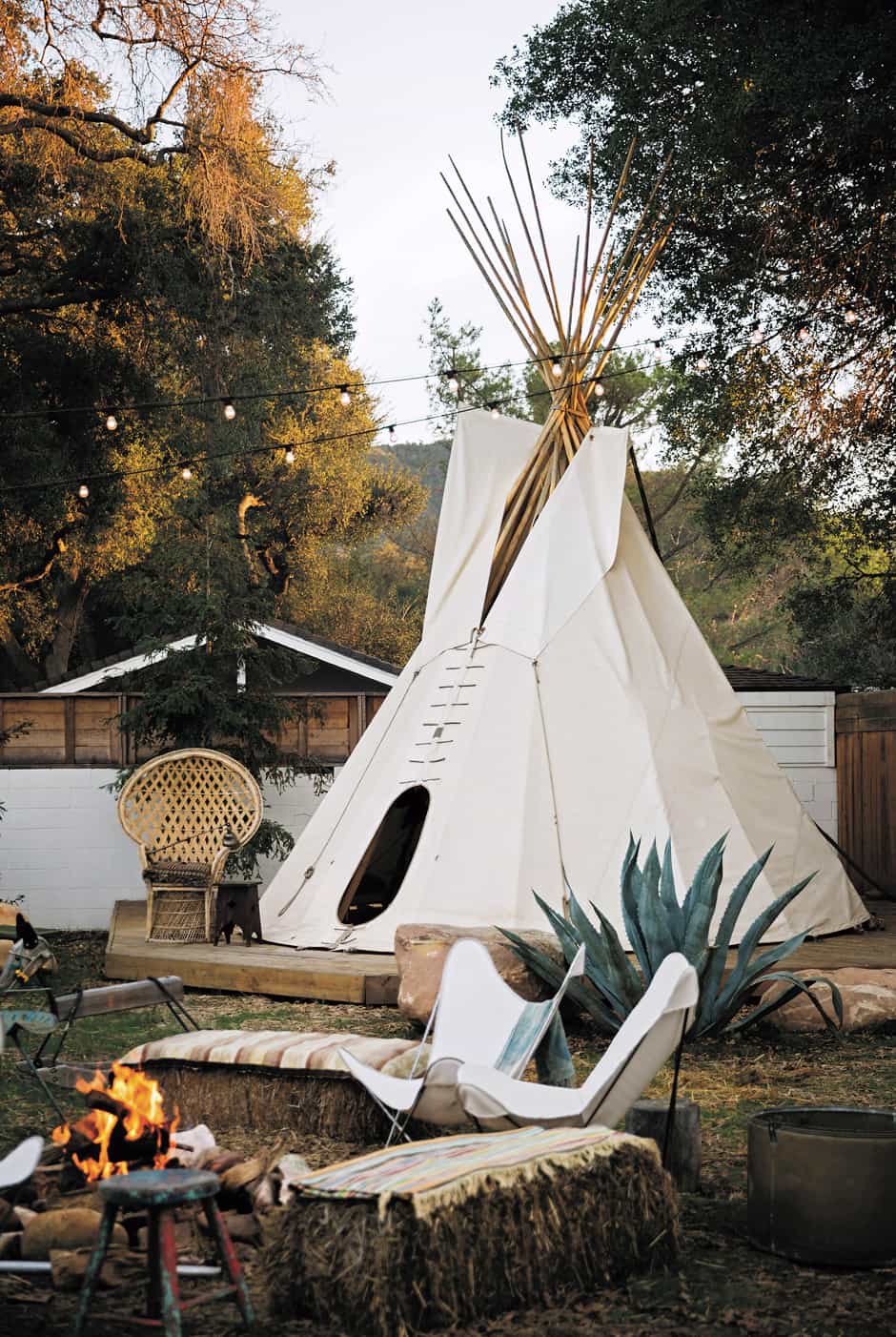 EXTERIOR The last big project on the couple’s remodelling agenda is the backyard, although all the major pieces are in place: the teepee, the fire pit, the deck and the beginnings of an outdoor kitchen.

Life in this hippy utopia is a constant ebb and flow of creative crashers – friends, family and strangers who become fast friends – which is exactly as Channon and Bianca always pictured it. “Some weekends, it’s like the cover of the Rolling Stones’ Beggars Banquet around here,” he jokes. “We’ve got three or four rigs parked in the front yard. We’ve got friends sleeping in the Airstream and the teepee. Everyone’s got kids, so we’re barbecuing, camping out and surfing. It’s like a madhouse – an amazing, wild, perfect madhouse.”