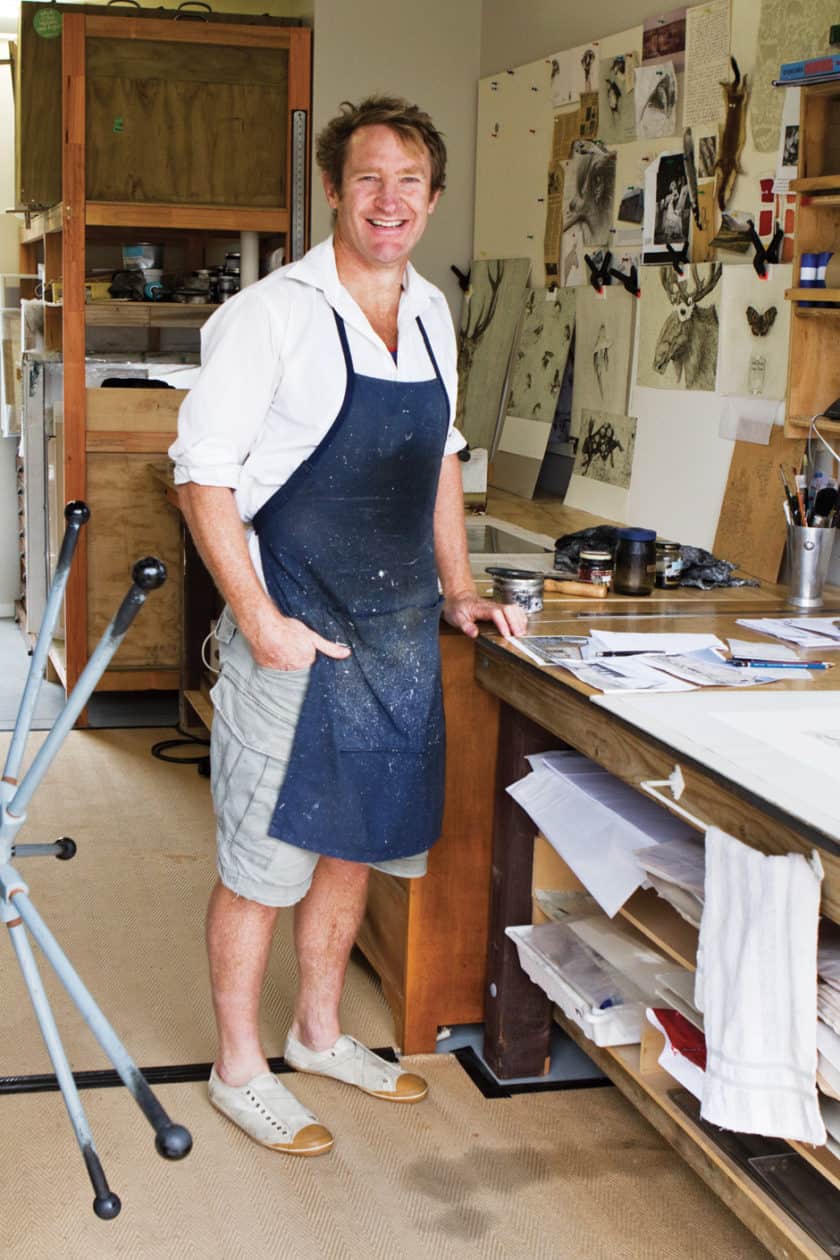 A couple farewells the city to build a life that blurs the boundaries between work, art and play.

Hanmer Springs is a popular holiday spot, and with its natural beauty and a wealth of outdoor pursuits to immerse yourself in – not to mention the famous hot pools – there’s good reason for that. So when edition printmaker Ben Reid and his yoga-instructor wife Olivia were looking for somewhere outside of Christchurch in which to make a new home for their young family, they thought, ‘Why not?!’ 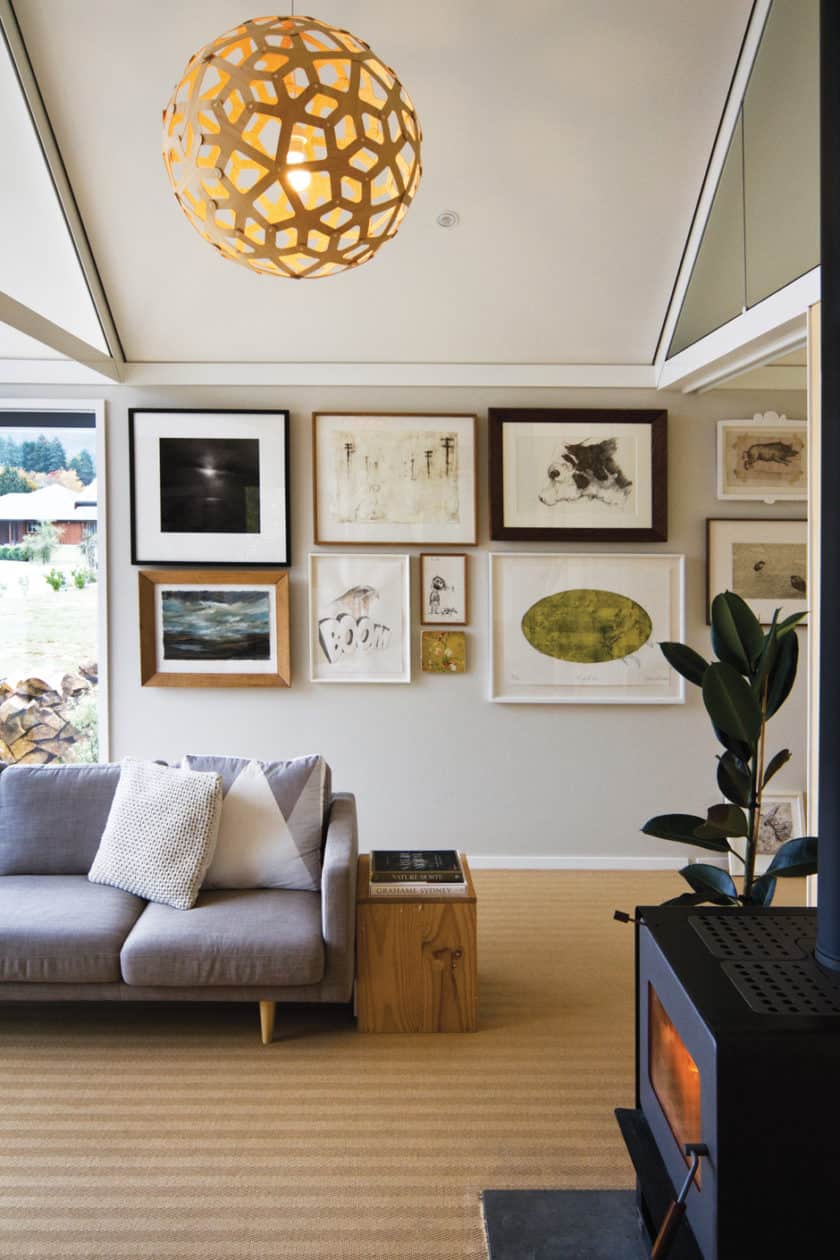 This salon-style hang is comprised of artworks by Ben and other New Zealand artists.

“We spend a lot of time out in the forest with Bella (5), Austin (3) and Molly the dog. In fact, it’s why we chose this particular plot,” says Ben. With their section bordering council land, they’re able to borrow from the landscape beyond their boundary, and there’s no chance of being built out. “We can head out the back door, over the creek and we’re on the heritage forest tracks that go for miles.” 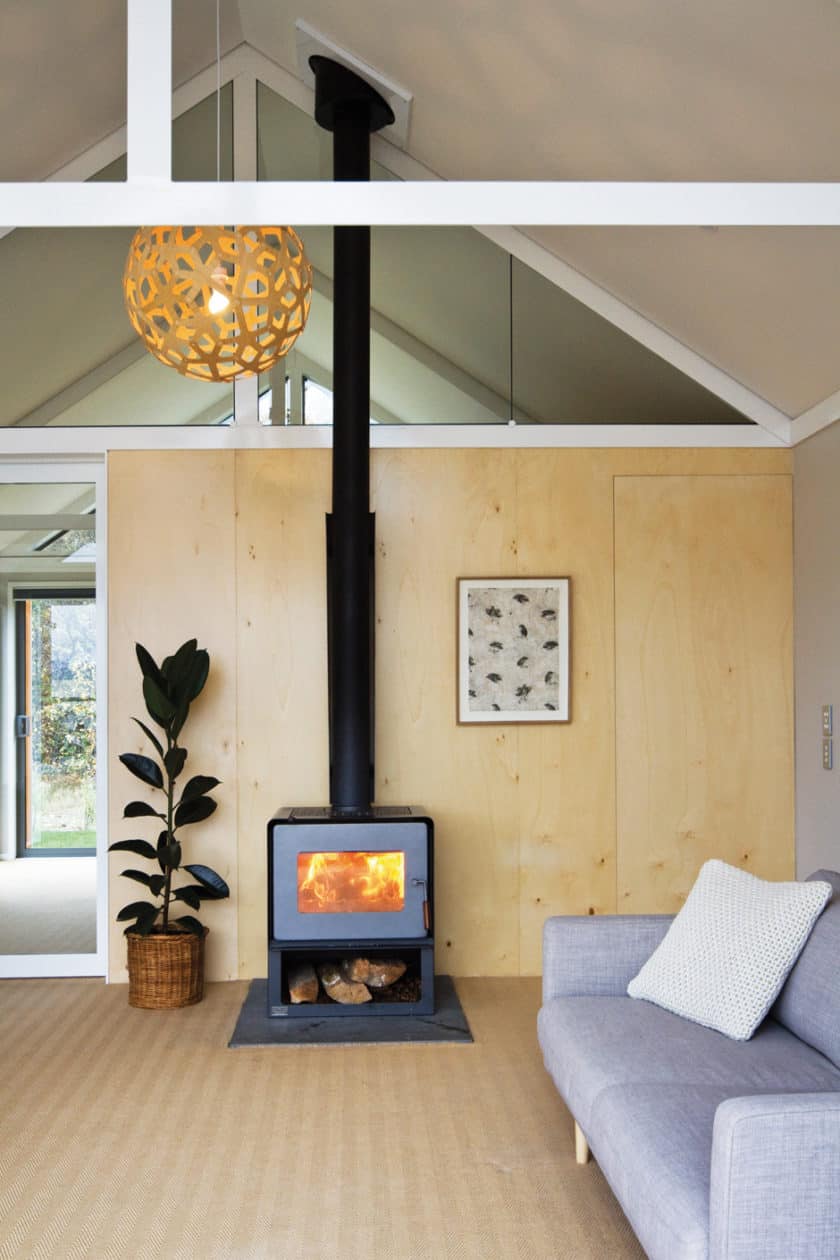 A push panel in the ply wall in the living room provides a secret entrance to the master bedroom.

Purchasing the site in 2012, the couple engaged architectural designer Ben Brady of Linetype Architectural and got to work planning a home that would fit in with the environment and accommodate their busy lifestyle. “It was a collaboration,” says Liv. “We allowed him to try out a few different ideas, but were really clear about our needs. We know what we do and don’t like, which made the decision-making process easy. He called us his dream clients!” 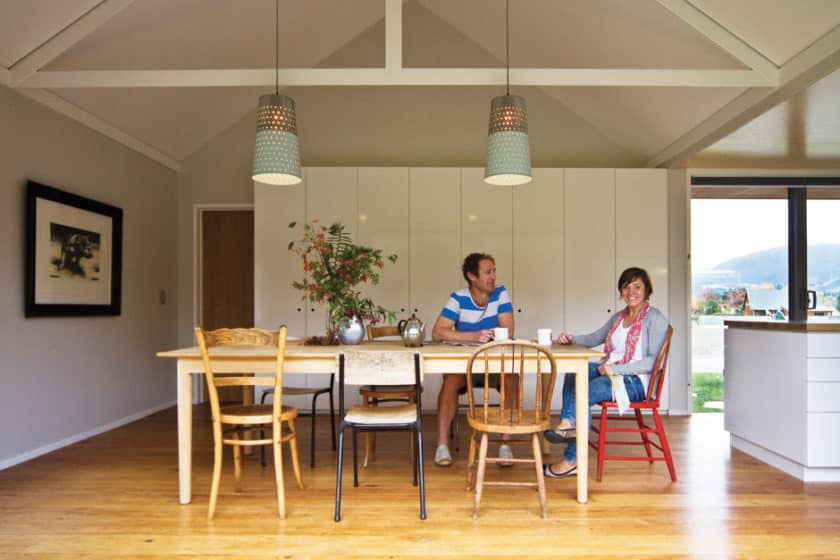 Ben and Olivia gather at the dining table they had custom-made, with pendant lamps from Homebase Collections overhead.

The home is divided into two modular forms that intersect with a central open-plan kitchen and dining area. One pavilion houses the living room, where a hidden panel in the ply wall reveals an office in the passage that leads to the master bedroom and ensuite. Bunkrooms for the kids, a guest bedroom, a bathroom and two garages run the length of the second pavilion. Well, they would be garages, if the space wasn’t otherwise occupied.
You could mistakenly assume that the family’s relocation to Hanmer Springs was spurred on by a relationship between the local environment and Ben’s art, but in actual fact, his beautifully detailed work is informed by the wider concept of conservation in New Zealand. What the move has done, however, is allowed them to work from home, with the garages converted into studios for Liv’s yoga and Ben’s printmaking. “Not only does this house have a family of four and a dog living in it, we run two businesses from here and designed it for exactly that,” says Ben.
Working with a combination of intaglio and relief printing techniques, Ben has spent the past decade honing his craft. 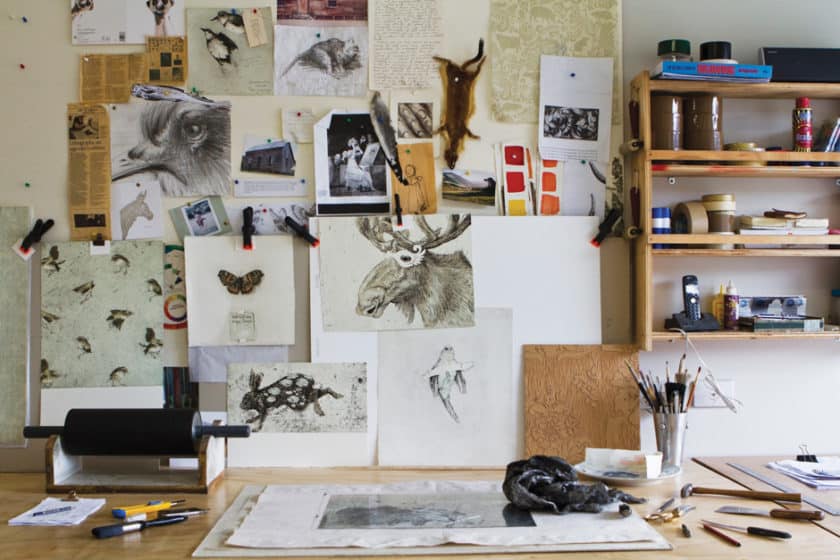 “I’m always writing things down, cutting things out, looking, thinking,” says Ben. “I’ve never had the ‘What am I going to do next?’ problem, as it’s a progression thing for me. Work begets work. There’s more than a lifetime of making in covering the topic of conserving New Zealand’s environment.”

“There’s always such anticipation and joy when a new piece is revealed fresh off the press.”
Since he’s been working as a full-time artist, he has become known for his intricately hand-drawn creatures layered with decorative and imaginary motifs that lend an intriguing, playful feel to his political subject matter of environmental vulnerability. “I gather true stories, then try to bend them, twist them and interpret them into visual narratives, but a lot of my work is about process too,” he says. “The set-up is half the job, so it’s great having the studio at home to make my art practice as accessible as possible with a young family.”
“This house is designed for who we are now,” says Liv. “There might be another house in our future, but it works really well for our family at the moment.”
“We’re in here together as a team,” says Ben. “It’s quite nice for me, because I can concentrate on the work, and Liv organises the business side of the art.”
“We’re on board together, which is great,” adds Liv. “Although now if I ask if we should go out for dinner, he asks me whether I’ve sold an artwork!” 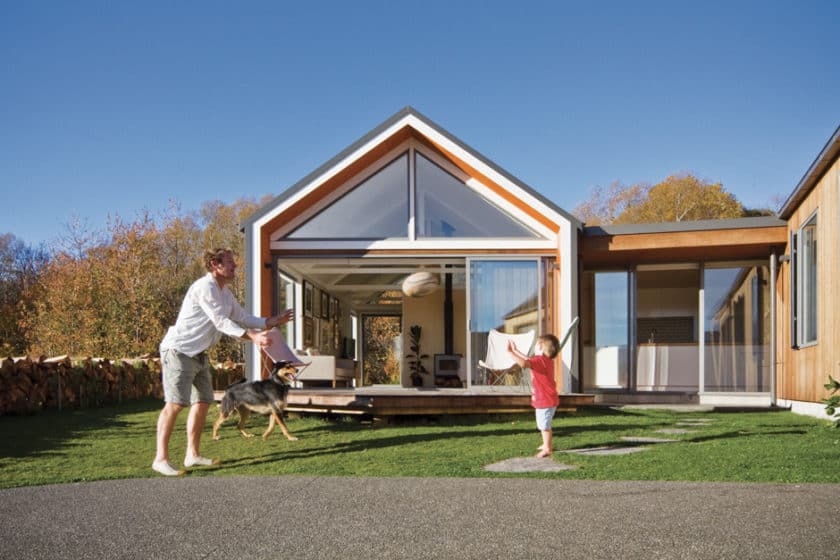 The home has a modern bach aesthetic, with the use of raw materials such as cedar cladding and rough-sawn ply acting as a nod to the local vernacular. There’s no formal entrance or foyer, which could be thought of as unconventional, but the space the couple saved in forgoing this element of the home has been dedicated to storage instead. Decks opening onto the garden on both sides of the house capitalise on the all-day sun.