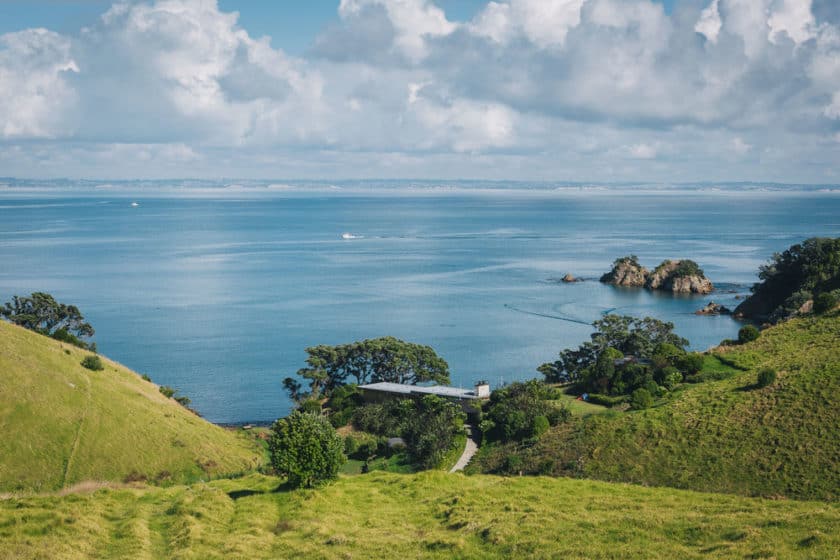 Having time to tinker is an integral part of the Rakino Island escape that is, as the brochures say, “40 minutes from Auckland, yet a million miles away”. And there has been a lot of tinkering on this 10 acre property…

Building a chicken coop from demolition weatherboards is a sustainable idea, but one that’s harder to bring to fruition than you might imagine. This is just one lesson that Stephen and Stacey Thomas have learnt from hard-won experience since they’ve become regular weekenders at their 10 acre property on Rakino Island.

With only approximately 16 permanent residents, Stacey’s mum Judi took the brave step of moving to the island three years ago to become the caretaker of the property. Although she can live unhurried every day, enjoying two shingle beaches overhung by gnarled pohutukawa, her learning curve has also been a steep one.

At least the house build went according to plan. The design, by architect Darren Jessop, is mindful of its manners in a landscape that’s treasured by locals and visitors alike. Even though it’s built on a knoll facing the sea, the structure is low-set and unimposing – answering the client brief well. “I was concerned with how inserting a man-made structure would affect the nature of the bay,” Stephen says.

The home is made up of two intersecting pavilions; one a half-step higher so its flat roof hovers above that of its companion. This lightness of being is reinforced by a material palette that is sparse yet substantial: a trio of in-situ concrete, hardwood timber, and glass – acres of the stuff. 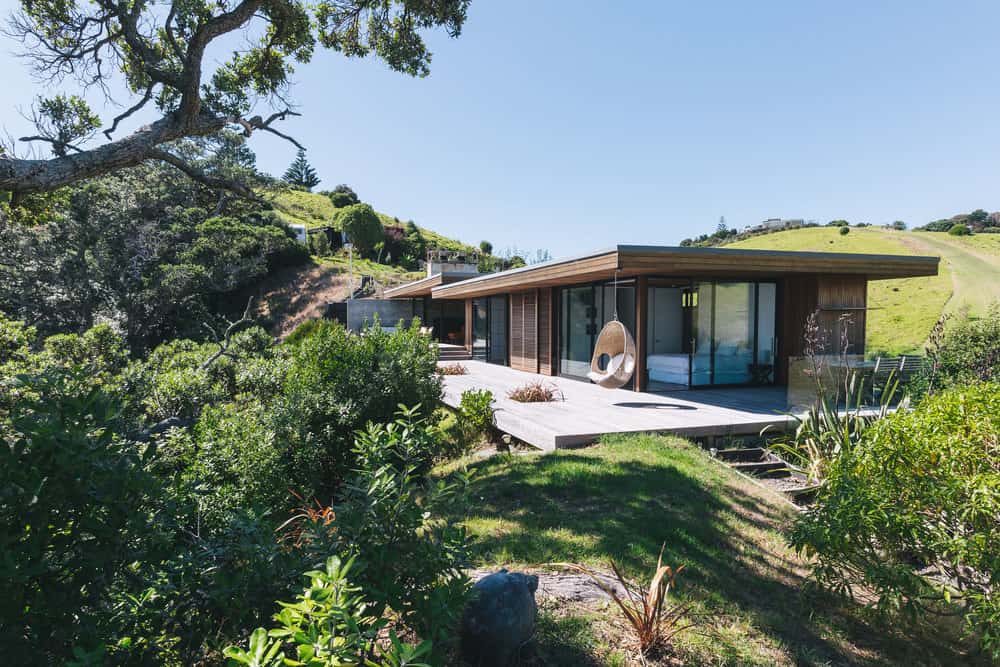 The layout is also uncomplicated. One pavilion contains the living, kitchen and dining, while the other has two bedrooms, each with an en suite. Thus this project could have ended up a rather humdrum pair of rectangles with little that made it sing. Not so. The proportions of the home are special; the details elevate it beyond the average, and the windows are placed precisely, so that views are framed like works of art.

Darren has the geometry of architecture finely mastered. There’s mathematical rhythm in the set-up of the black aluminum joinery as it steps gently down the hill. There’s lineal magic in the sarked-cedar ceilings that lead the eye to lift off into the view of the bay and the rocky forms of the Three Sisters. And there’s heft in the concrete wall that begins externally and traverses the glass sides of the home to become a fireplace at the north-west end. Its sheer volume and rough boxed finish anchors all that architectural grace and weightlessness.

Stephen and Stacey love the freedom such no-nonsense materials give them to live casually – especially now their 18-month-old daughter Scarlet is on the scene. For this reason, they added aged oak floors throughout. “The surface is ‘skipped’, meaning they’re planed and then sanded not much further back from their rough-sawn state,” explains Stephen. The result lends an antiqued contrast to the contemporary cool of the other materials.

Not sweating the small stuff becomes a mantra for living on the island, and Stacey, a former singer and music company owner, kept this top of mind when choosing the furnishings. “I wanted to keep things sparse, with just one big statement piece,” she says. A burnt sienna leather-upholstered L-shaped sofa is that piece. “It tones in with the warmth of the cedar ceilings.” 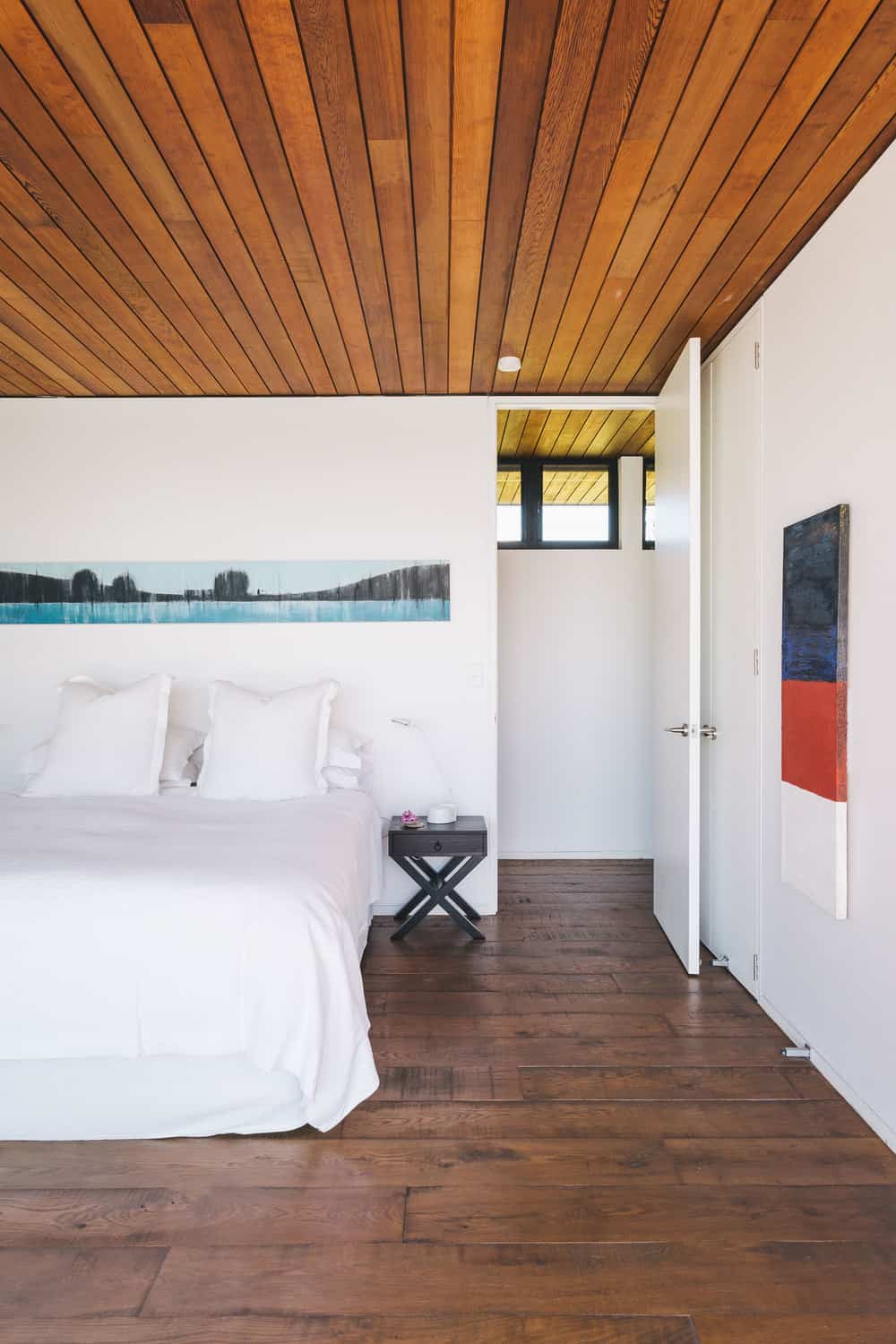 Stephen commissioned a steel-framed table which Stacey teamed with black polypropylene dining chairs. “They’re so easy to clean while retaining some style,” she says. “Easy care is best when you have a small child and two dogs running around.”

Indeed, in this off-the-grid home where appliances run on solar power and the rainwater is collected for irrigation, cleaning is not a high-priority pursuit. When they draw up the anchor on their aluminum runabout and leave the big city lights behind, Stacey would much rather spend her time outdoors tending to the chooks – and, these days, bees. “I mentioned to Stephen that I’d love to start beekeeping, and suddenly one day he bought three hives from a friend of ours.”

How to care for these amazing little creatures, and protect them against mites, was another lesson that had to be learned – rather quickly. “They’re so complex,” says Stacey, “but I do have help from Oliver at Beez Thingz and in my first season we gathered about 70 kilograms of honey.” Not bad going for an amateur apiarist. 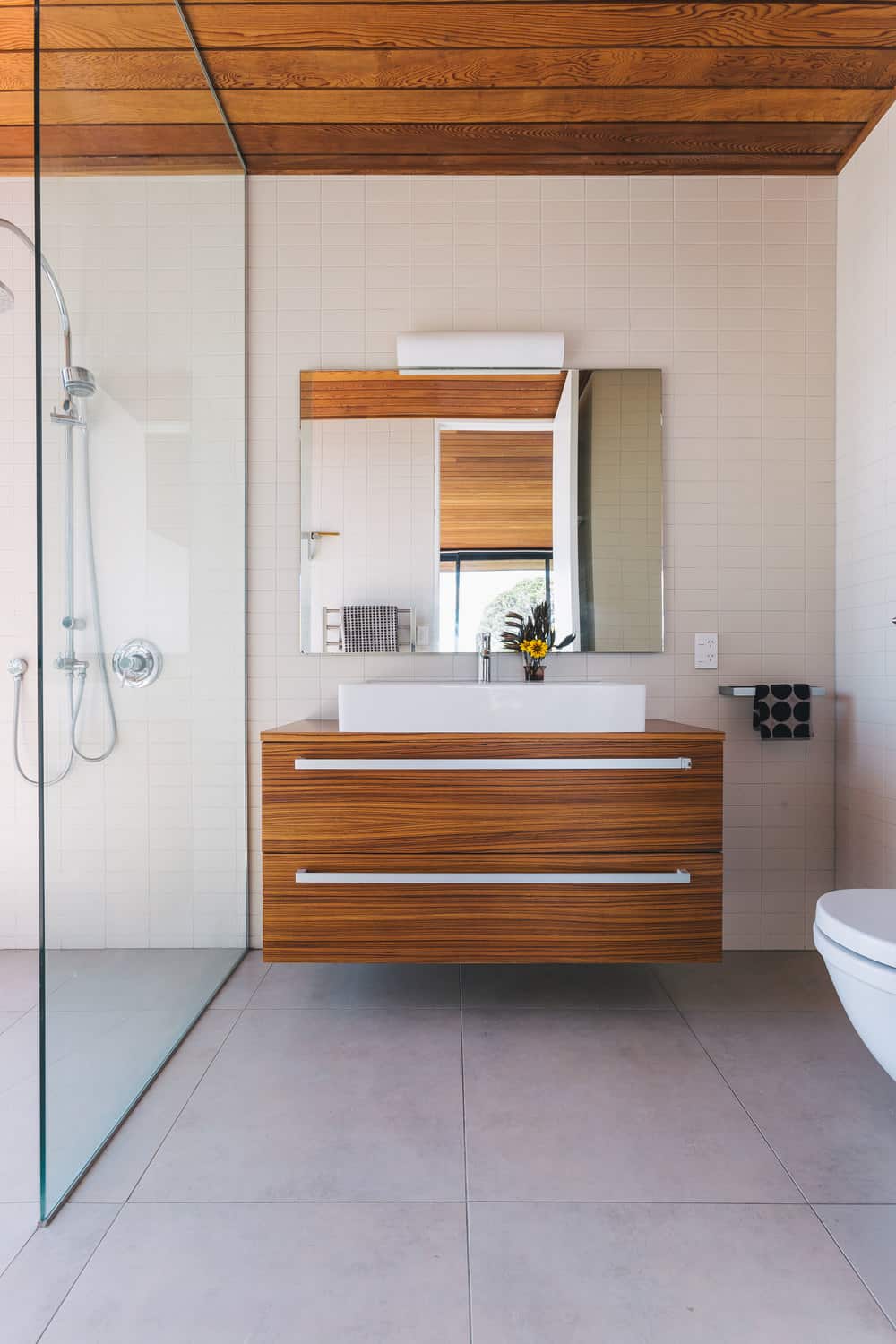 When she’s not getting a buzz from her newfound hobby, or knee-deep in the vege patch, Stacey loves to hang out with Scarlet on the deck overlooking the shingle beach and the changing scene of boats in the bay. “In summertime we put out the paddling pool under an umbrella and just muck around,” she says. Those with more energy can hop in the dinghy and putter out to gather mussels off the nearby rocks.

However, for now,  such leisurely times are the exception not the rule. These city folk have had to become practical and self-sufficient – and that means work. Most weekends at the bach are spent planting, clearing scrub, mowing lawns, maintaining machinery or cleaning out the chook house. “When you live on an island, you need the capability and means to fix something if it goes wrong,” Stephen says.

But the couple see this busyness as a transitional phase rather than a permanent state of being; once the kikuyu is beaten and the bare land reforested, it will be time to kick back and enjoy island life as it was intended.