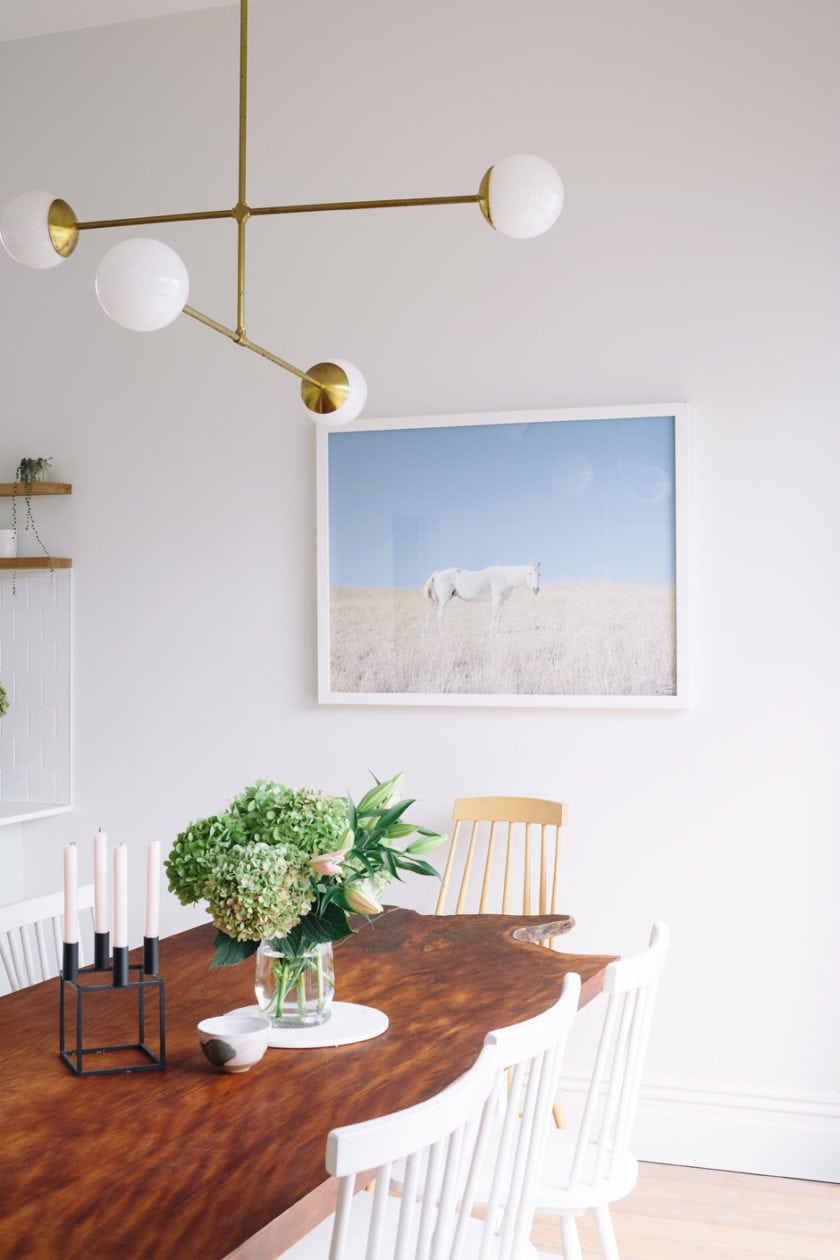 Though they bought it while living a world away, for the owners of this villa, the connection runs deep.

The butter-yellow front door left ajar sends  an invitation to Scout, the neighbourhood beagle, who arrives in Jess and Cam Hodgson’s Auckland living room unannounced. Although theirs is the type of home and bijou garden that would suit a small resident hound, the couple has quite enough on their plate at the moment, thanks. Their daughter, Maggie, is just 11 weeks old and there are several tasks and touch-ups still to do before their villa renovation is complete, so Jess gives Scout a scratch on the tummy and sends him on his sociable way. 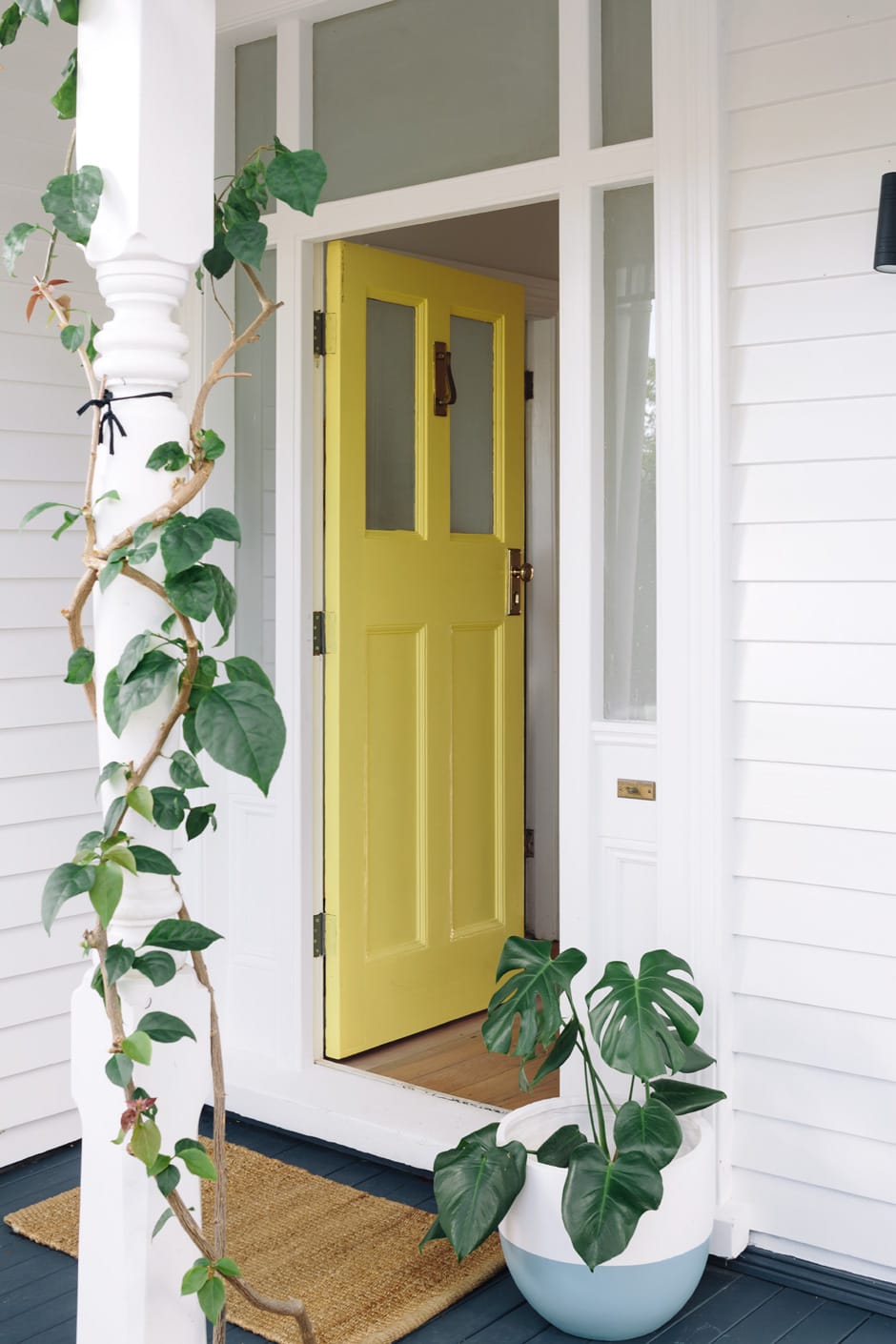 ABOVE Bougainvillea reaches for the sky outside the front door painted in Dulux Koromiko. Beside it, a Monstera deliciosa grows in one of Jess’s pots, called Happy Leaves, from her creative project now on hiatus.

Jess and Cam, who met at a party in London, bought their Ponsonby villa by private sale at the end of 2014, when they were living in the UK. “The owners were friends of my sister, Amy,” says Jess. “We were shown some photos and happened to be coming home for a wedding, so we went to view it.”
They liked what they saw. Even a crumbling brick wall, flaking green paint, a wobbly back deck and a roof that needed replacing weren’t enough to deter their enthusiasm. “It was so close to my sister’s house, it almost seemed too good to be true,” says Jess, who couldn’t wait to leave their flatting situation in East London to begin a new life in their first home. “I was so excited,” she recalls, “I immediately started looking for things to furnish it with.” 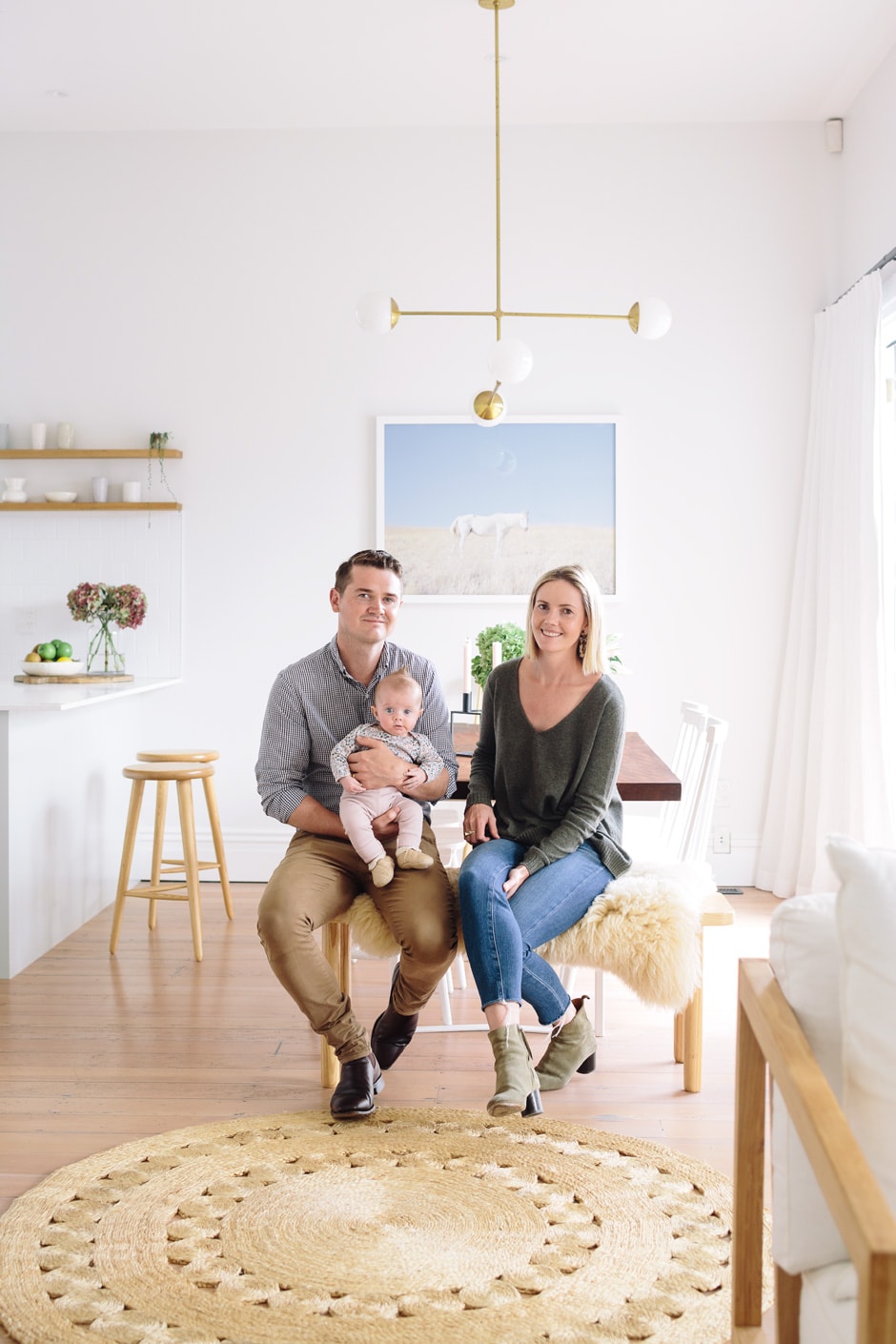 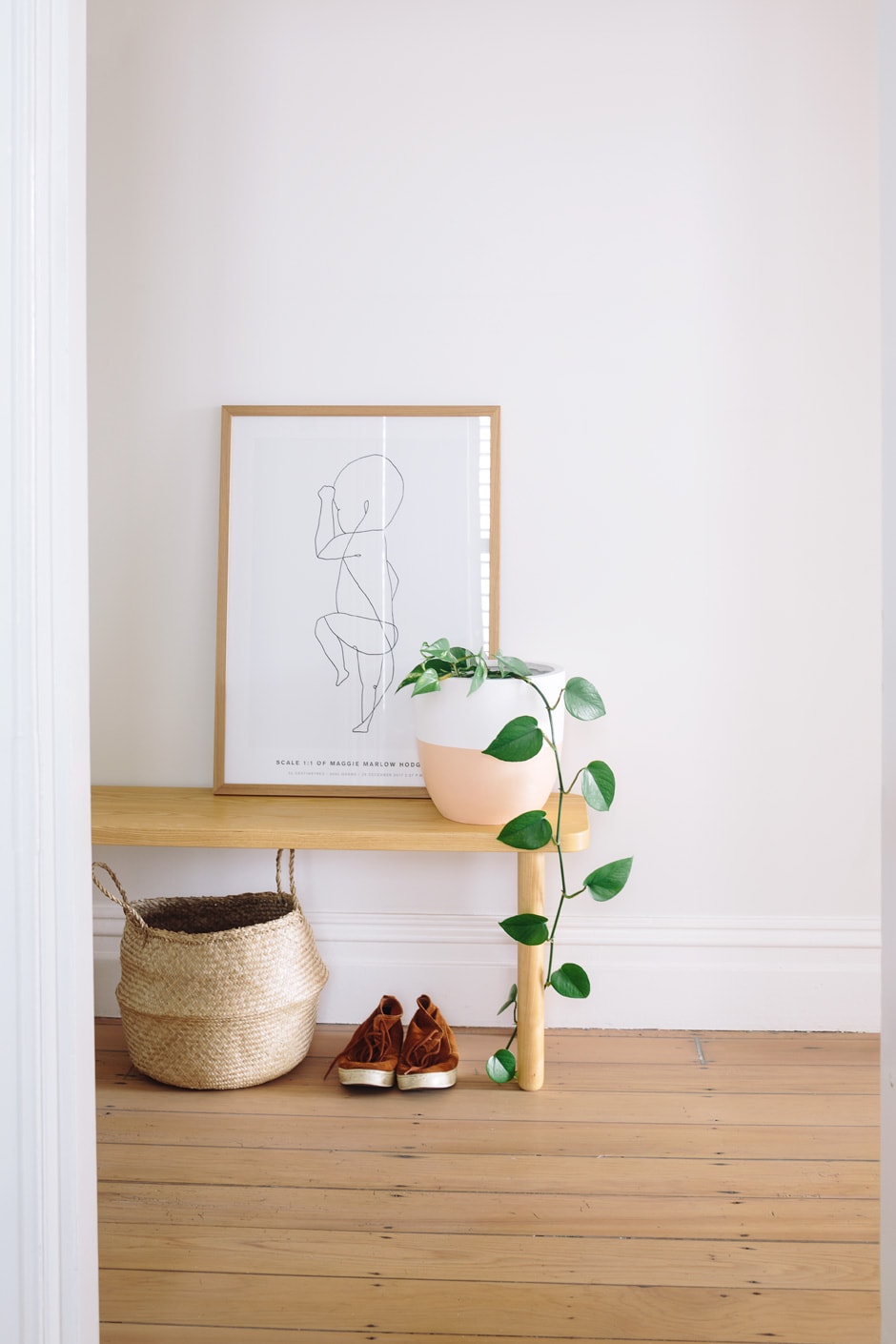 TOP The Ynez print by Tessa Neustadt in the dining room provides a pretty link with the blue cabinetry
in the adjacent kitchen. The Line 04 2.0 pendant light is by Douglas and Bec, the Sèti bar stools are by NDC and the Dandelion rug is by Armadillo & Co from The Ivy House. ABOVE Anchored by a Sunday bench from Sunday Home Store, this vignette in the hallway includes a Mai basket from Freedom, an illustration by The Birth Poster that celebrated Maggie’s arrival, and another of Jess’s pots.

Since moving in at the end of 2015, the couple has put a modern stamp on this colonial cutie. The previous owners had already extended the rear room overlooking the garden, so no structural alterations were required, but the bathrooms called out for a contemporary facelift and the kitchen was a bit ho-hum. “It was greige with purple/grey benchtops,” says Jess, who had fallen in love with Resene’s Quarter Robin Egg Blue from the Karen Walker range and knew exactly what she wanted.
The couple’s friend Hannah Chiaroni-Clarke, an architectural project manager, came to the party, drawing up the plans. Meanwhile, Jess had admired builder Nye O’Shannessy’s home on the cover of homestyle’s issue 71, so she called him and fortuitously found he had some space in his schedule.
As well as moving the laundry to a bifold cupboard in the hallway, Nye helped transform the heart of the home from ‘will do’ to ‘wow’. That longed-for blue features on the kitchen cabinetry, which also has a tongue-and-groove finish that brings a sense of yesterday to the clean-lined space. The bespoke timber handles are a similarly lovely addition – an update with a back-to-the-future sensibility. 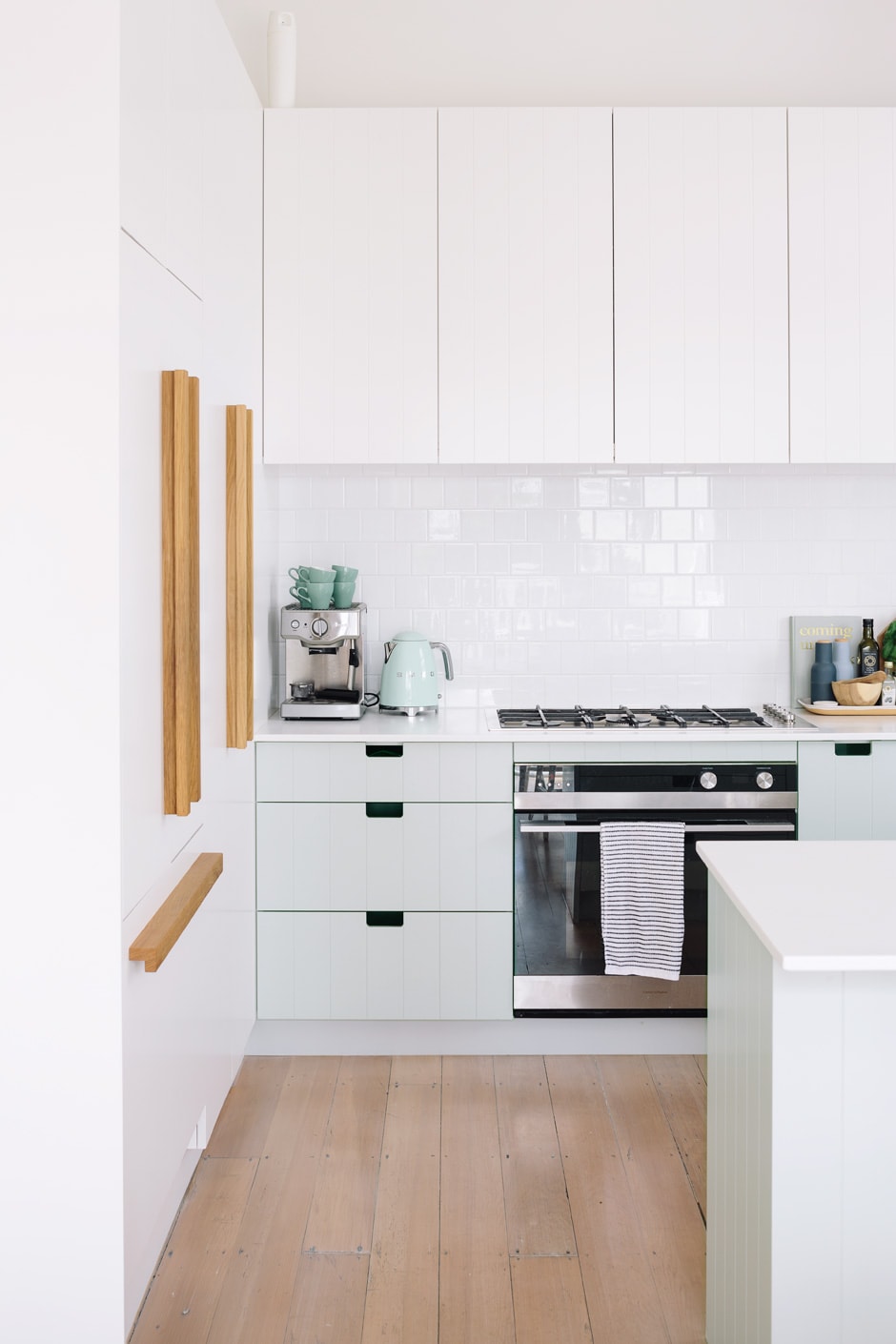 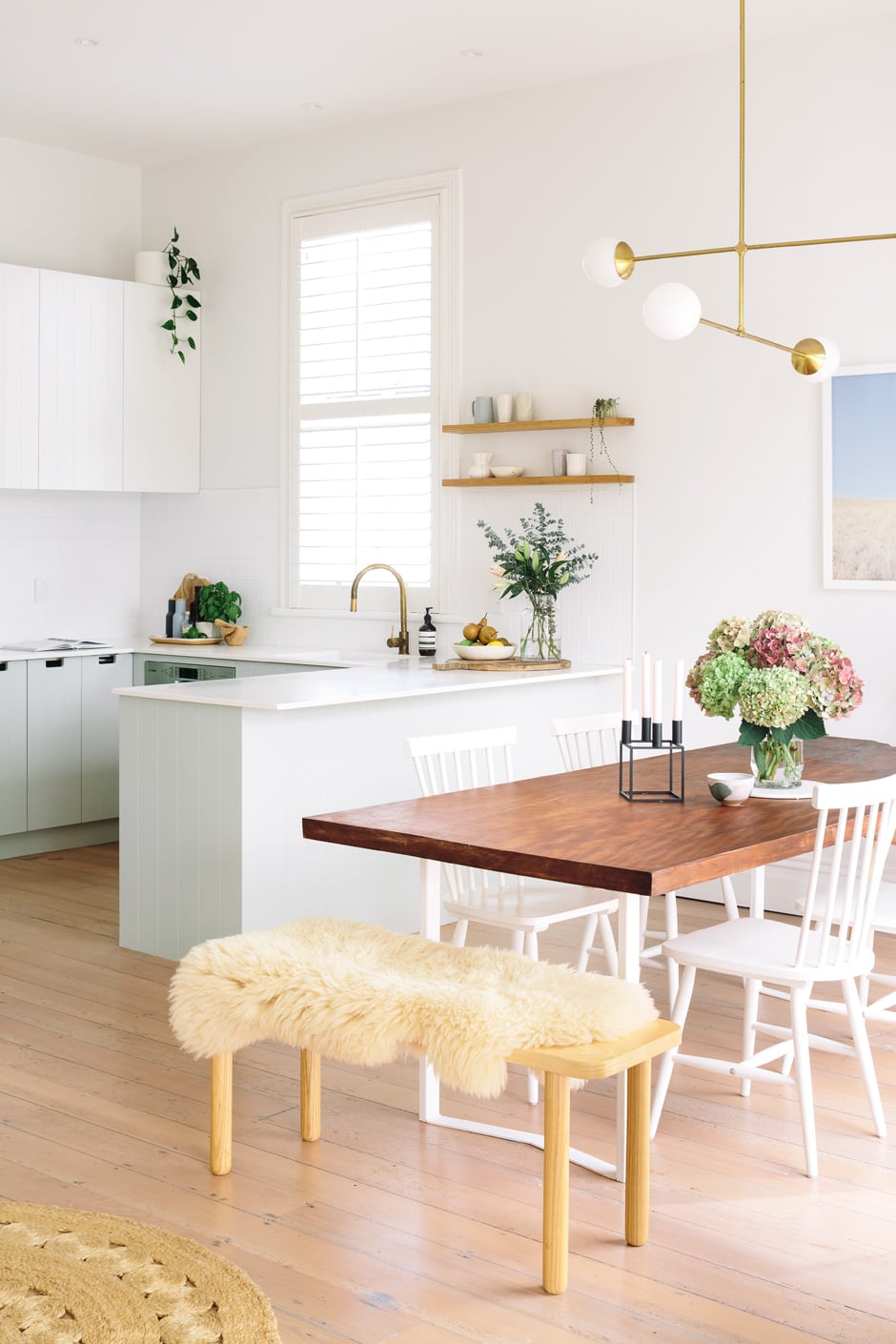 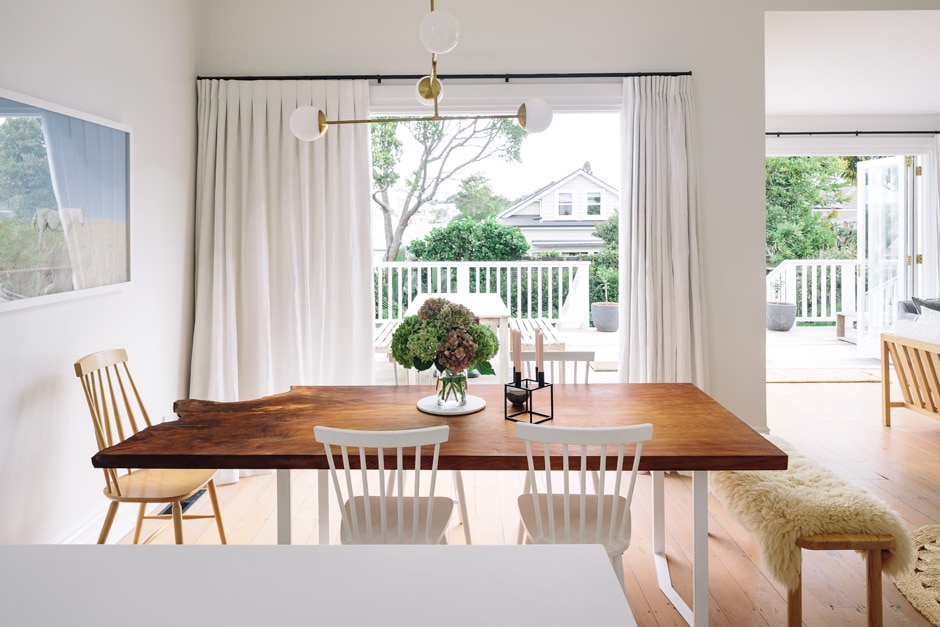 TOP The pair love their open-plan kitchen and regularly entertain. Jess often hosts morning teas, and Cam enjoys preparing his signature slow-cooked meals for dinner parties with friends.MIDDLE There’s a bit of a ceramics collection on the go on the shelves by cabinetmakers Artisan Kitchens; the couple’s favourite makers include Claybird, JS Ceramics, Paige Jarman and Wundaire. The Kubus 4 candleholder by Lassen was another wedding gift. ABOVE Jess says she has a soft spot for blond wood – and it shows. At the end of the table crafted from swamp kauri found on Cam’s uncle’s farm is another Sunday stool; the white dining chairs are by Cintesi.

The same can be said of the bathrooms. The existing layouts didn’t change, but Jess and Cam upgraded all the fixtures. “We sold the ones that came with the house on Trade Me with a $50 reserve. They’ve ended up in a bach somewhere, which is nice to know.” New encaustic tiles on the floor of the main bathroom hark back to Victorian times, while in the ensuite, matte black hexagons are a pleasing contrast to the white wall tiles laid in a herringbone pattern. The new brass fittings in both have already developed a beautiful patina. 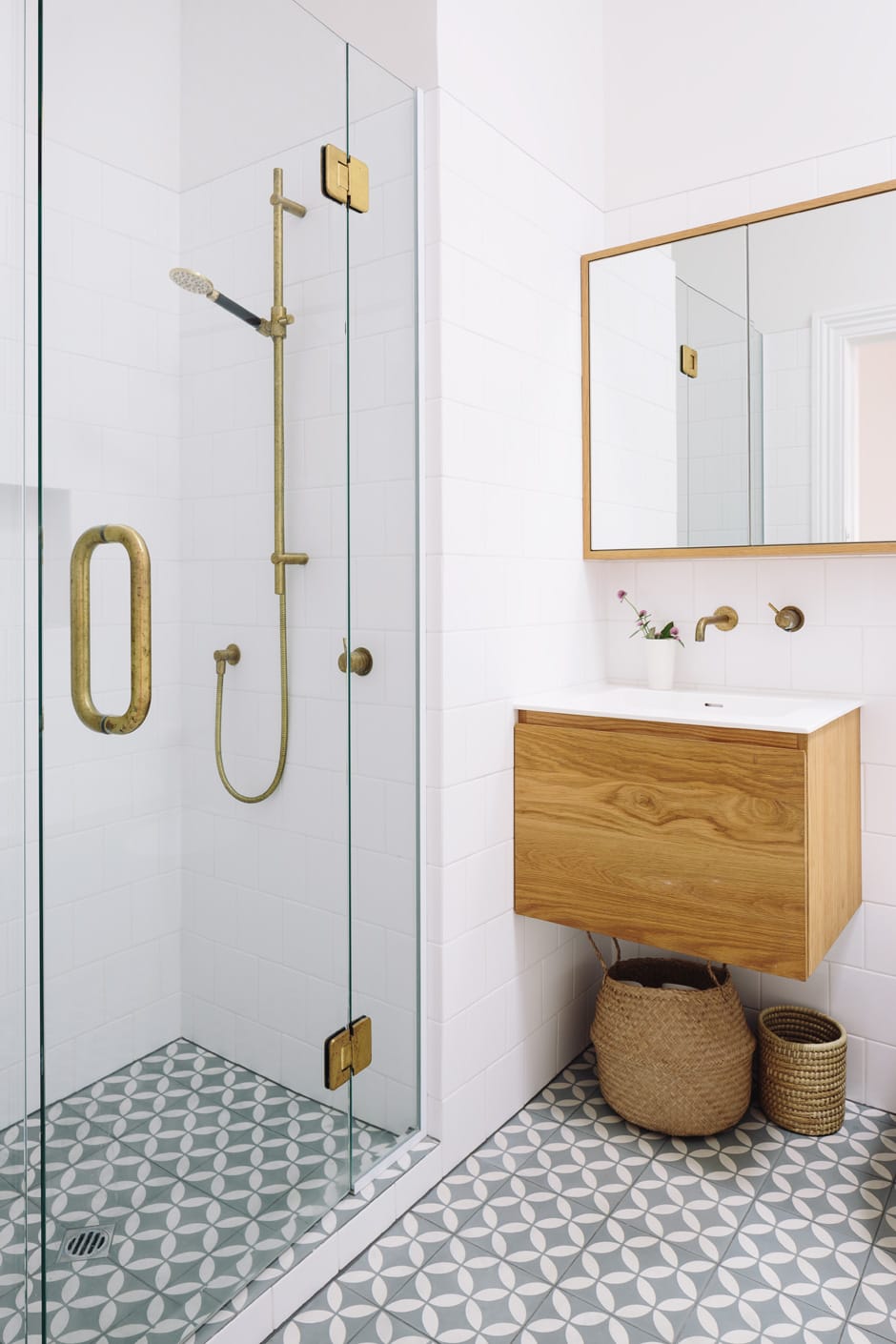 ABOVE A new skylight overhead has made the formerly dark main bathroom a lovely tranquil space.
Brass hardware from Plumbline’s Buddy range, a vanity crafted from ash timber and encaustic tiles from Artedomus are a simple but effective combination.

Although the building work was relatively minimal, the couple was still kept busy. They painted the walls throughout in Resene Black White, sanded and whitewashed the timber floors, and had a home-ventilation system installed. What has made the biggest difference, however, is the new deck out the back. The previous one was so rickety, “it felt like it was about to swallow someone up”, so with the help of another friend, builder Ben Hurdley, they extended the footprint and added a wide staircase to replace the narrow steps that led down to the lawn. 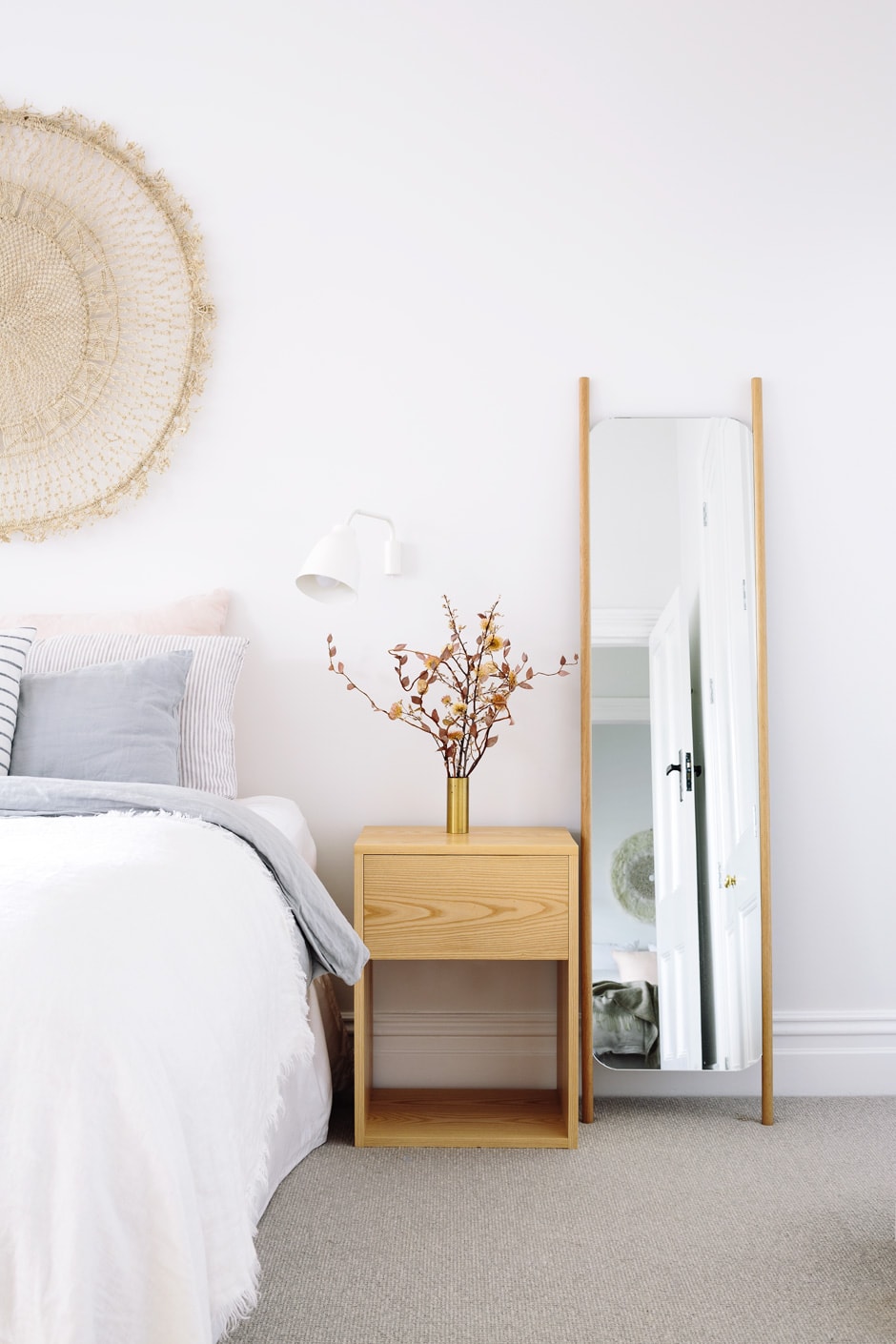 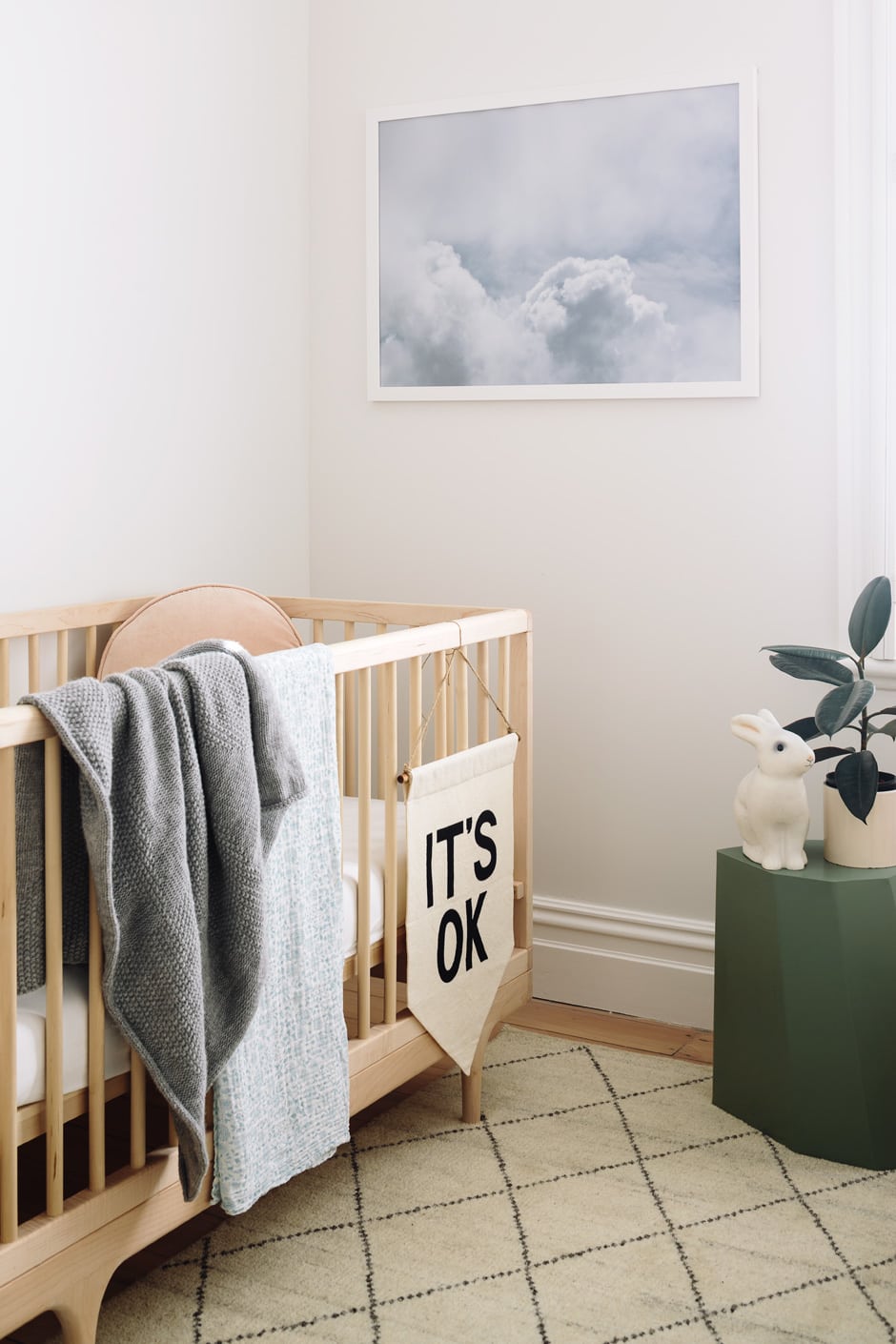 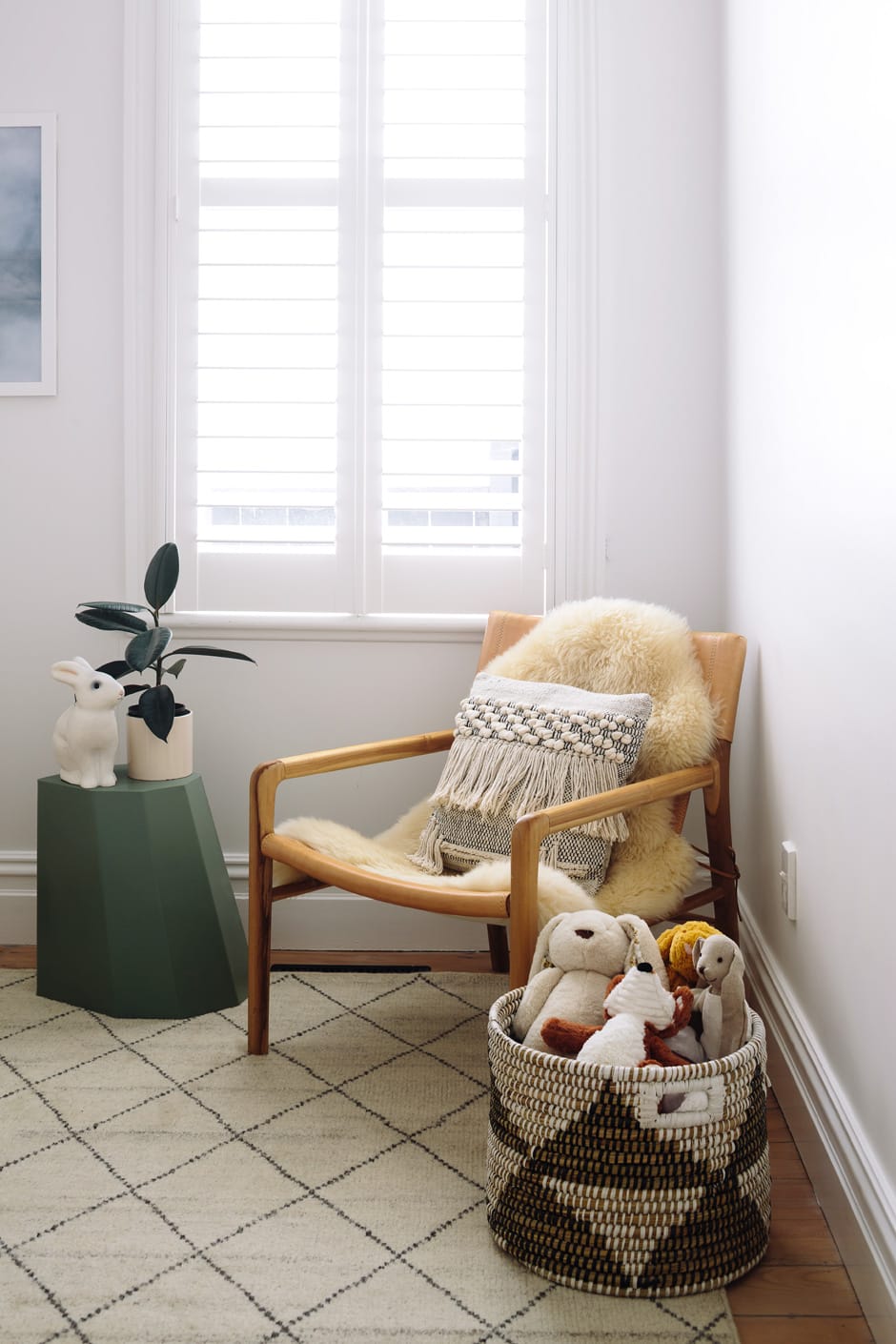 TOP A jute wall hanging from Nest decorates the wall in the couple’s room, where Caravaggio wall lights from Cult shed light on bedside tables custom-made by NDC. The pillowcases are by Alex & Corban, the duvet is from Nest, the throw is by Cultiver and the Lean Dress mirror is by Joska & Sons. MIDDLE & ABOVE In Maggie’s room, Awakening from Sunday Home Store hangs above a Caravan crib by Kalon. The Rabbit nightlight from Nature Baby is super cute on the Arnold Circus stool by Martino Gamper, and the chair is from Copper & Pink. On the floor is an Atlas rug by Armadillo & Co from The Ivy House.

Inside, Jess had lots of fun finding furnishings and accessories that fit with an aesthetic she calls “Scandinavian boho”. She’s combined finds from Ikea (the cabinet in the hallway; the floor lamp in the living room) with custom-made pieces (a blond chest of drawers with brass handles by Ben Glass in the master bedroom; a bespoke coffee table designed by Tauranga husband-and-wife team NDC), added rattan light shades, replaced the globes on the original light fixtures, and gone modern with a Douglas and Bec chandelier in the dining area.
Family treasures bring an extra layer of interest to the interior scheme, like the dining table made from a piece of swamp kauri found on Cam’s uncle’s farm in the Coromandel. “Cam designed the table, and had the timber milled and legs made,” says Jess. “The wood is thousands of years old.” 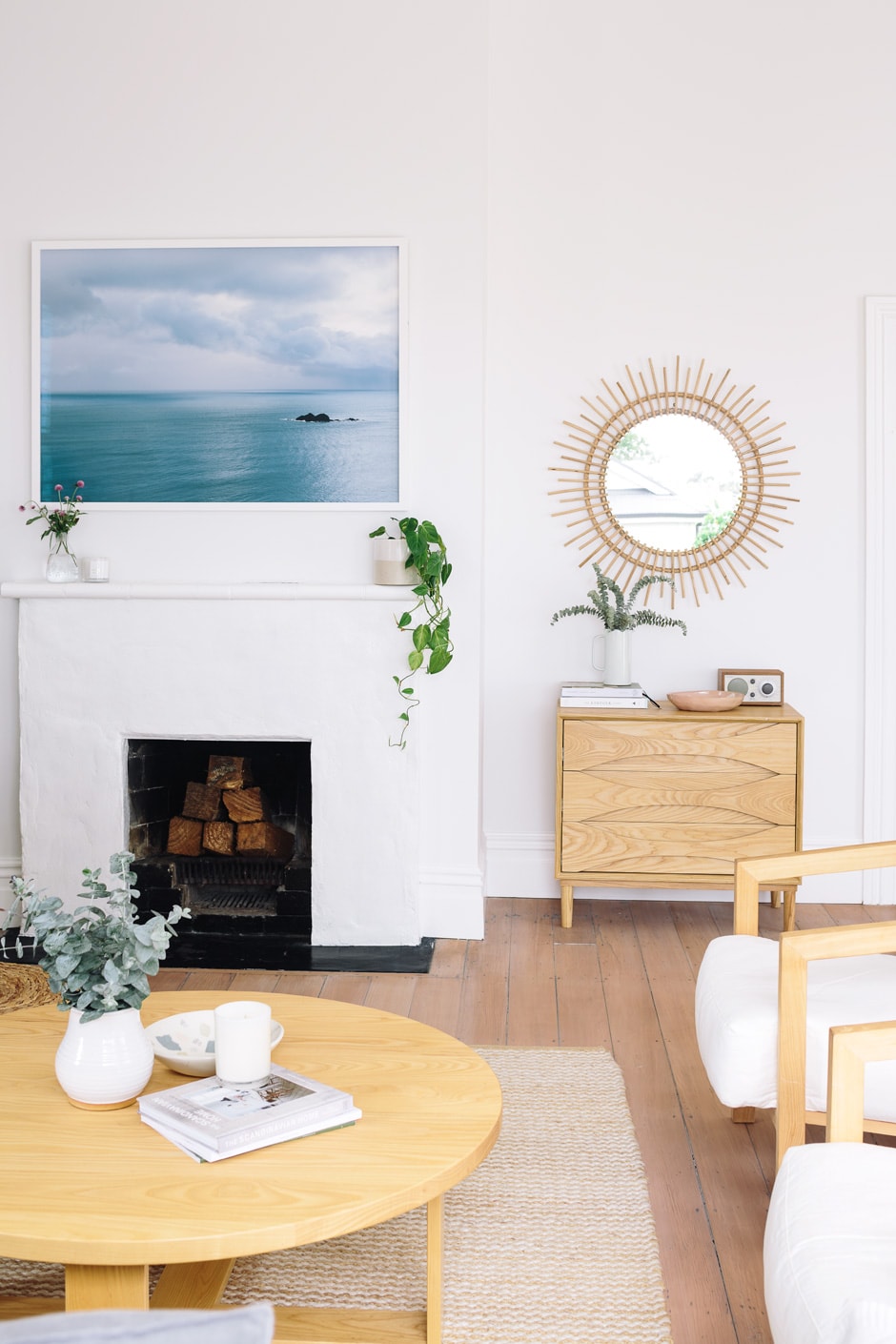 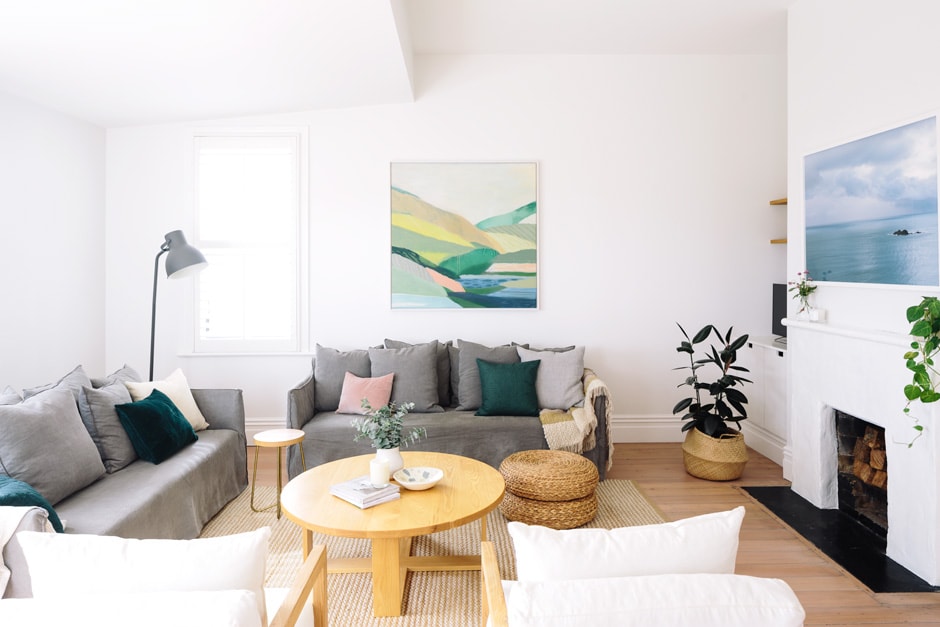 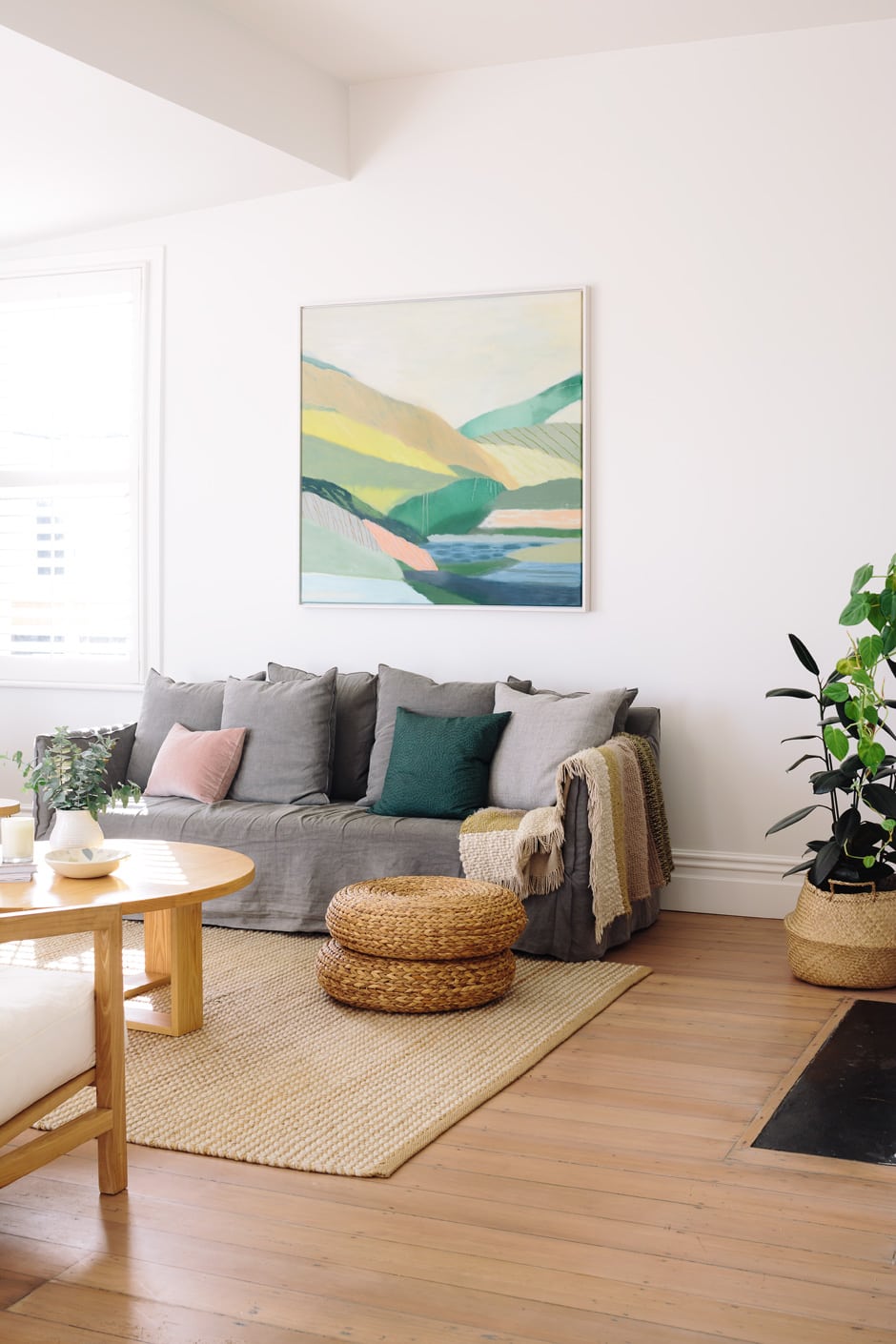 TOP A photographic print (Waiheke Island Seascape 2) by Duncan Innes hangs above the fireplace near a mirror from Mildred & Co. The sideboard from Homage is a tonal partner for the coffee table by NDC. MIDDLE St Clements was a happy discovery during Jess’s initial décor research. The brand’s timeless Joe sofas and Holt armchairs that now form the centrepiece of the living room were an inspired choice – “and the covers on the sofas can be removed for cleaning”. ABOVE Tying in with the painting by Belynda Henry – which the couple fell in love with at an exhibition while on holiday in their favourite city, Melbourne – cushions from Città in blush pink, forest green, sand and grey round out the colour scheme. A pair of Alseda banana-fibre pouffes from Ikea sit on a Drift Weave rug by Armadillo & Co from The Ivy House.

Getting married early last year was a bonus in more ways than one (the elegant mirror in the master bedroom was a wedding present), as was having a baby. Apart from the inevitable hurry-up a pregnancy gives a renovation, Cam made the most of his paternity leave, using some his time off work to build the shelves in Maggie’s bedroom, and add the final coats of paint to the deck and the planter boxes he made the summer before. 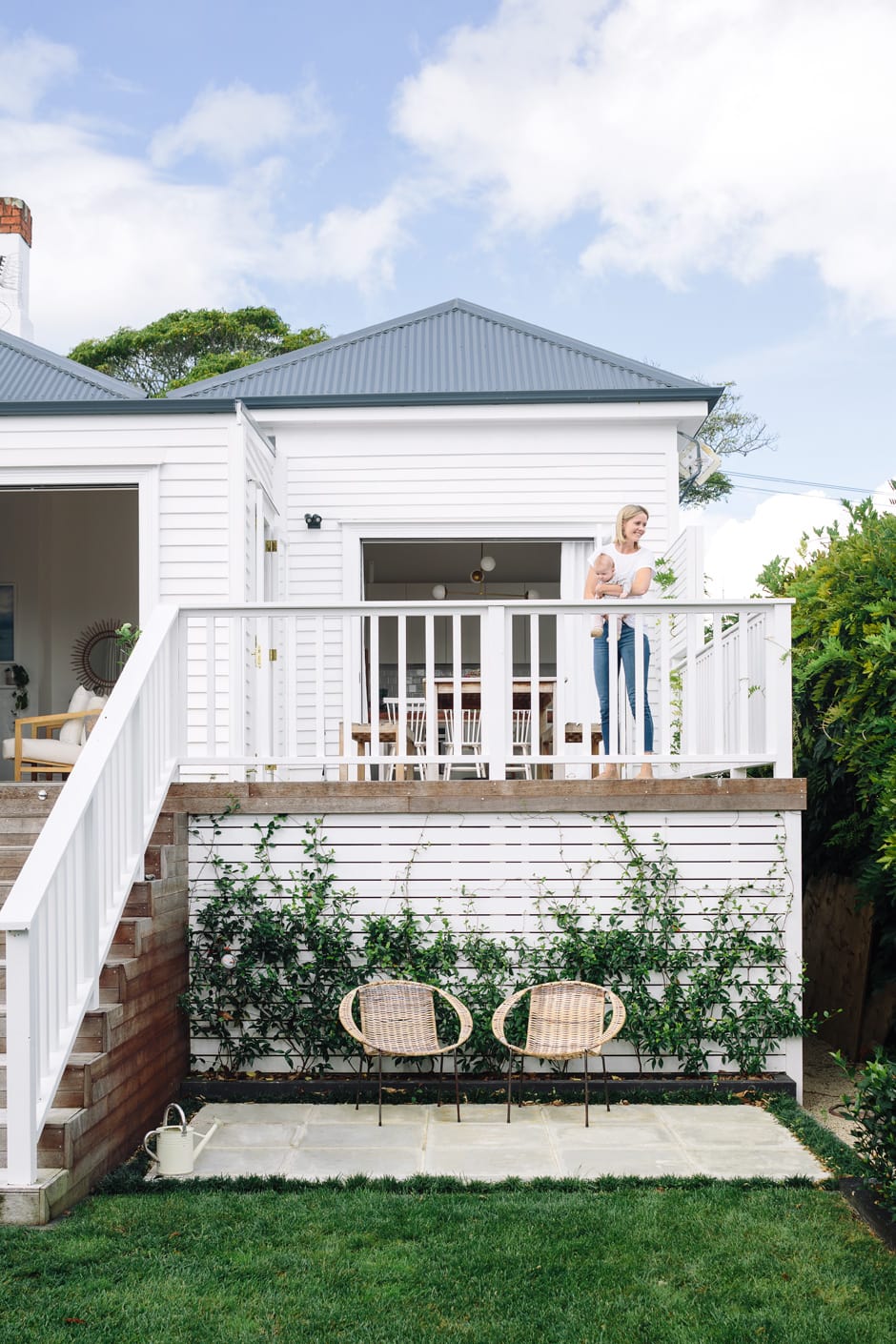 ABOVE The family keeps the doors to the deck open virtually all day every day from November to April, says Jess, who found these outdoor chairs on Trade Me at the bargain price of $20. Meanwhile, Cam is a big gardener and confesses that mowing the lawn is one of his favourite pastimes.

Before Maggie came along, Jess had been hand-painting plant pots with the idea of setting up a business. That project is now on hold, but she’s got another one: hunting for décor finds. She considers her best discovery, however, to be the house itself. It’s so close to her sister’s home they can see the roof. “We can smell when they’re making hot-smoked salmon out in the garden and hear their kids playing.”
When Maggie is finally tucked up in bed for the night and the sun is setting over the Waitakeres, the couple can sit on the elevated deck, take in the view of the palm trees at the nearby tennis club, and know they’ve come a long way.