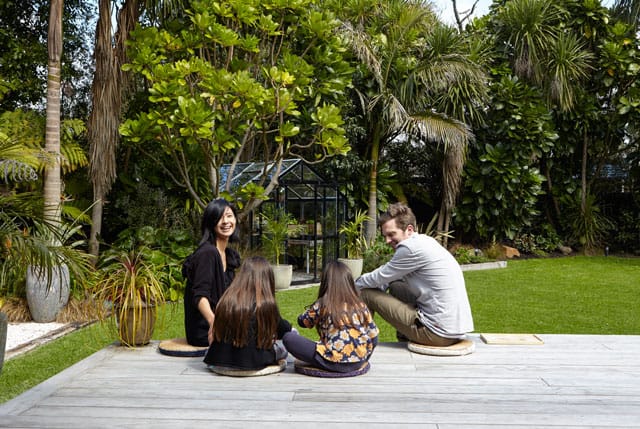 To Yuka and Tristan O’Shannessy, good design is more about what isn’t included than what is.

Tokyo-born Yuka O’Shannessy arrived in Auckland 12 years ago to study fashion at AUT – and ended up spending almost as much time at K Road’s iconic Brazil cafe. The place did great coffee, yes, but there was another reason for her visits – a barista reason called Tristan O’Shannessy.

Today they’re married and living in the West Auckland suburb of Avondale with their two daughters, Hana (8) and Monae (6). And they have another baby too – their Japanese-inspired Yuka&Tristan clothing label that they run from their home studio and sell via yukaandtristan.com and also from their Japanese concept store, An Astute Assembly.

The family settled in their 800m² bungalow in 2009, deciding to renovate first, then convert the garage into a workspace later on. Coming from a family of builders, Tristan set to work with the help of his brother; replacing the bathroom, putting in a new kitchen complete with simple concrete benchtops, then adding bi-fold doors and a deck, and working with the already established garden to give it structure.

Yuka says: “The garden is the main reason we bought the place.” Which may be why, although the garage has recently had its studio makeover, Yuka can still often be found cutting patterns at the kitchen table overlooking the garden.

All around her is a running theme in the clothes she makes, the Japanese homeware she imports, and the way everything is displayed in their home. “It’s all about minimalism, about using what you have cleverly, and about taking away anything that doesn’t need to be there,” she says. “It’s a Japanese thing.”

Indeed, there is much evidence of Yuka’s approach of being “very selective”. In fact, it was this philosophy, coupled with an interest in the re-emergence of the handmade movement in Japan, that fuelled her desire to start An Astute Assembly – seeking out Japanese craftspeople and importing the objects they make into New Zealand.

One of Yuka’s favourite AAA objects is the Magoroko knives which are handmade in the same way they have been since the 18th century. There is a set of them in the family kitchen, amongst other sentimental things. “I have lots of lovely bits and pieces from An Astute Assembly that I adore; that really remind of home,” she says. “We have been given so many treasures too, such as a collection of Tristan’s mother’s paintings, which are not only beautiful, but incredibly precious to us as she passed away only a couple of years after painting them.”

The house has many of these personal touches, a true reflection of the people who live there. But more than that, everywhere you look – inside and in the workroom – you find evidence of Yuka’s mantra: “Design away what’s not needed.”