Escape the bright city lights for an island getaway 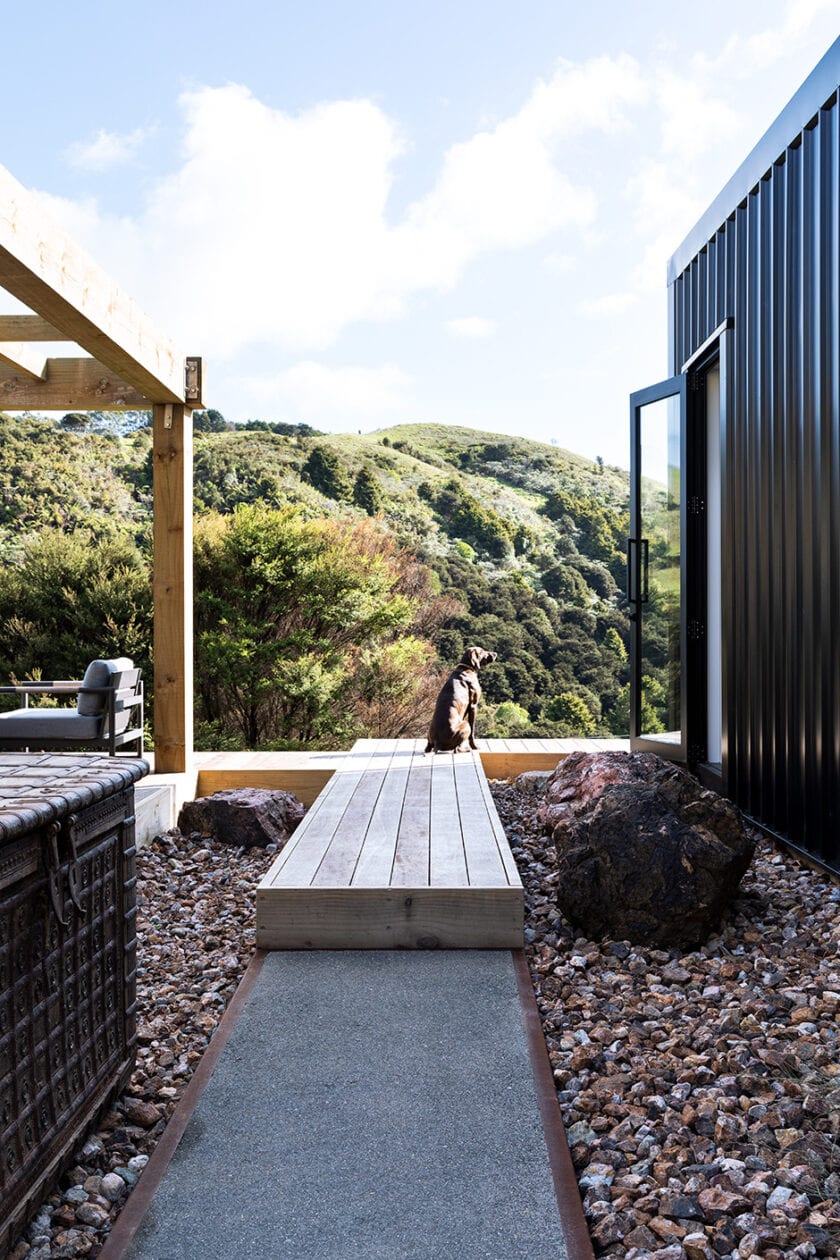 We take a visit to Fleetwood, a newly built retreat on Waiheke, which you can stay at too.

It had been a lifelong ambition of Jackie Houghton’s to live a simple country life somewhere far away from bright city lights. After 10 years spent living overseas, the pull of rural New Zealand and the promise of a new project inspired her to return home, put her property in Palm Beach, Waiheke Island on the market and begin the hunt for another block of land with space for one main dwelling to live in and a couple of studios to rent out too. 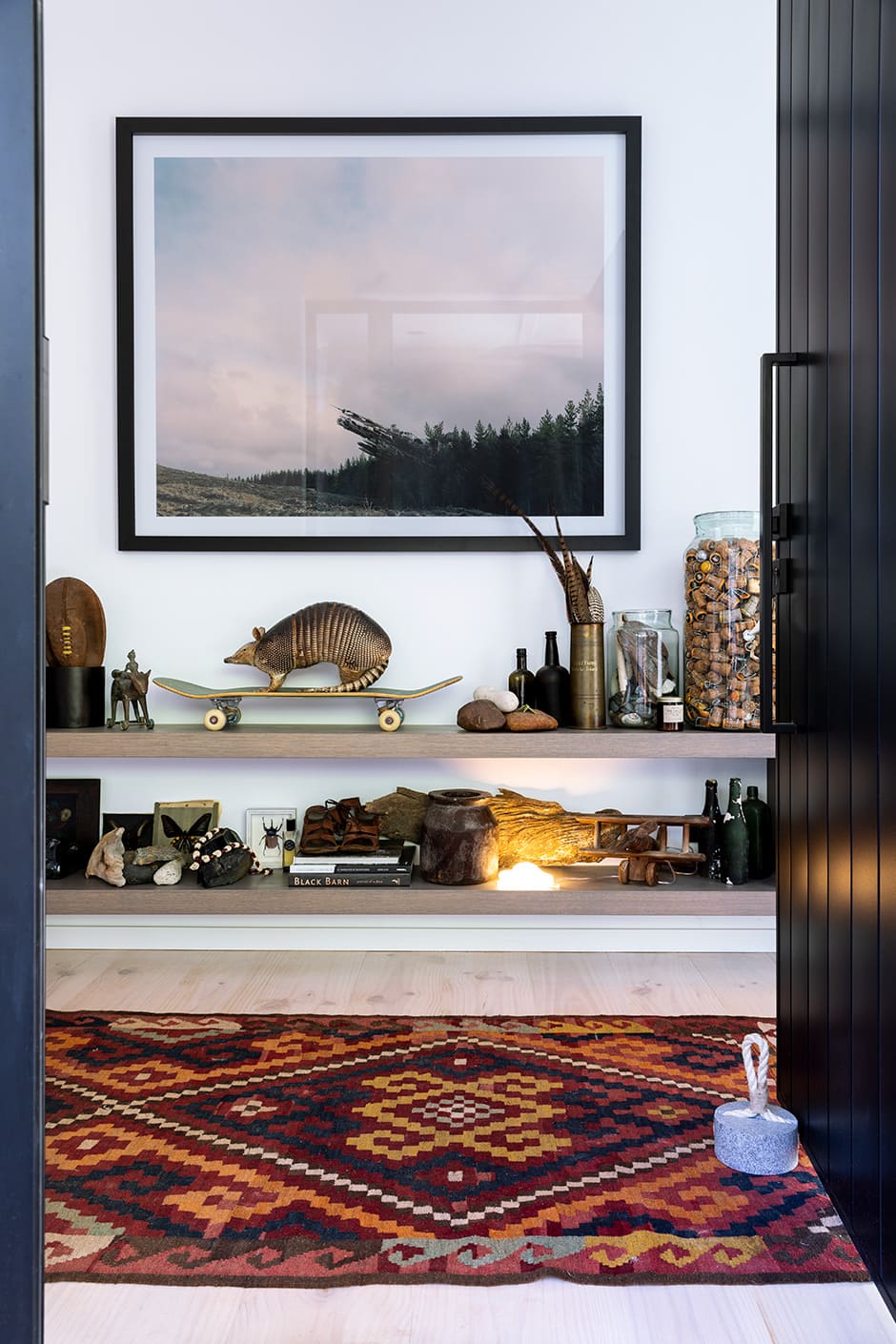 ABOVE In the entryway, a photo from Derek Henderson’s body of work Let’s Hope They’re Friendly sits above curiosities collected from around the world.

“It was a dream that I’d always had — to build a place of my own that would suit my lifestyle and generate income,” says Jackie of her goal.

Sizeable rural sections aren’t easy to come by on Waiheke Island, so when Jackie’s property agent showed her an 18.5-acre block in Awaawaroa Bay, she knew the rolling site surrounded by native bush and farmland was where she’d set her new home into the hillside beneath Maunganui, the island’s highest point. 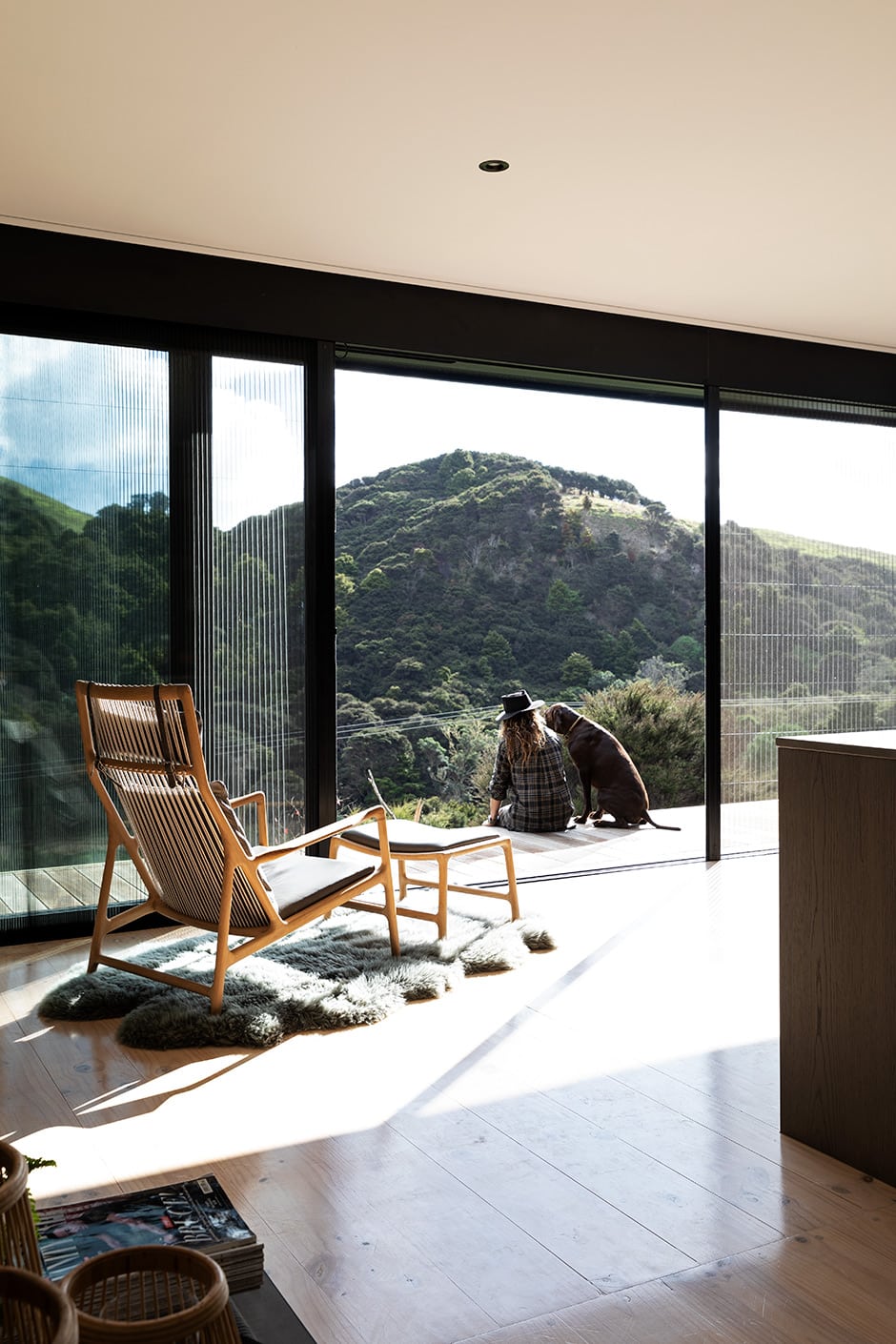 ABOVE Jackie and her dog, Caxton, sit on the boardwalk that surrounds the main house. Here, retractable pleated screens by Phantom Screens let in the light while keeping UV rays (and bugs) out.

“I went home and drew a really simple plan — where the house was, where the studios were going, how the driveway would lead you up from the road, where the platform up the top would get the best view of the sea for afternoon sundowners,” she says. “I scribbled everything on a piece of paper, then went to architect Thom Gill at Studio Nord to help bring my ideas to life.
“Thom took full control of the project with the council,” she continues. “He and builder Peter Davidson of Davidson Construction were both very considerate about what I had to spend and making my dream happen. It was never their project, it was always mine, and they were very respectful of that.” 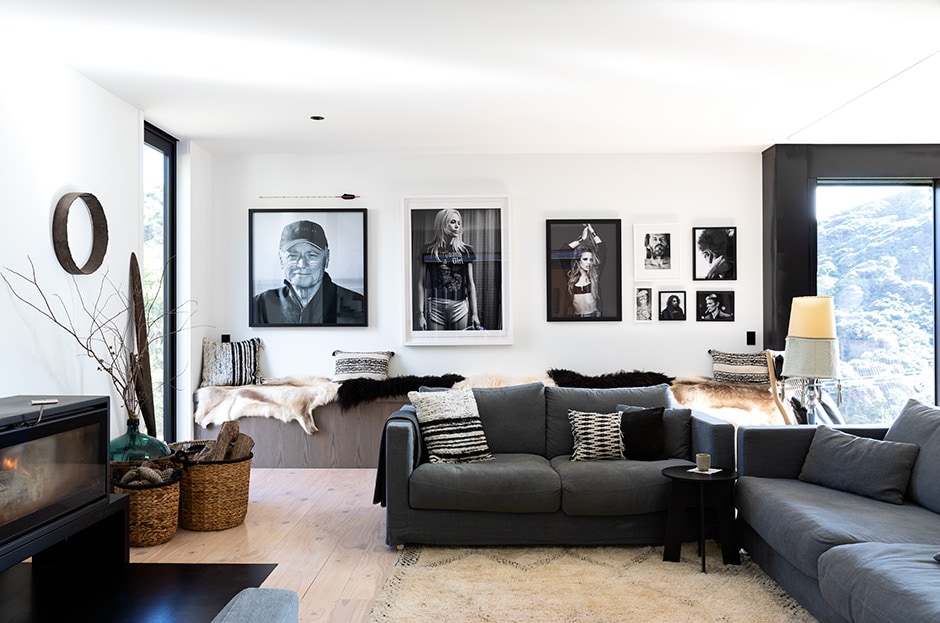 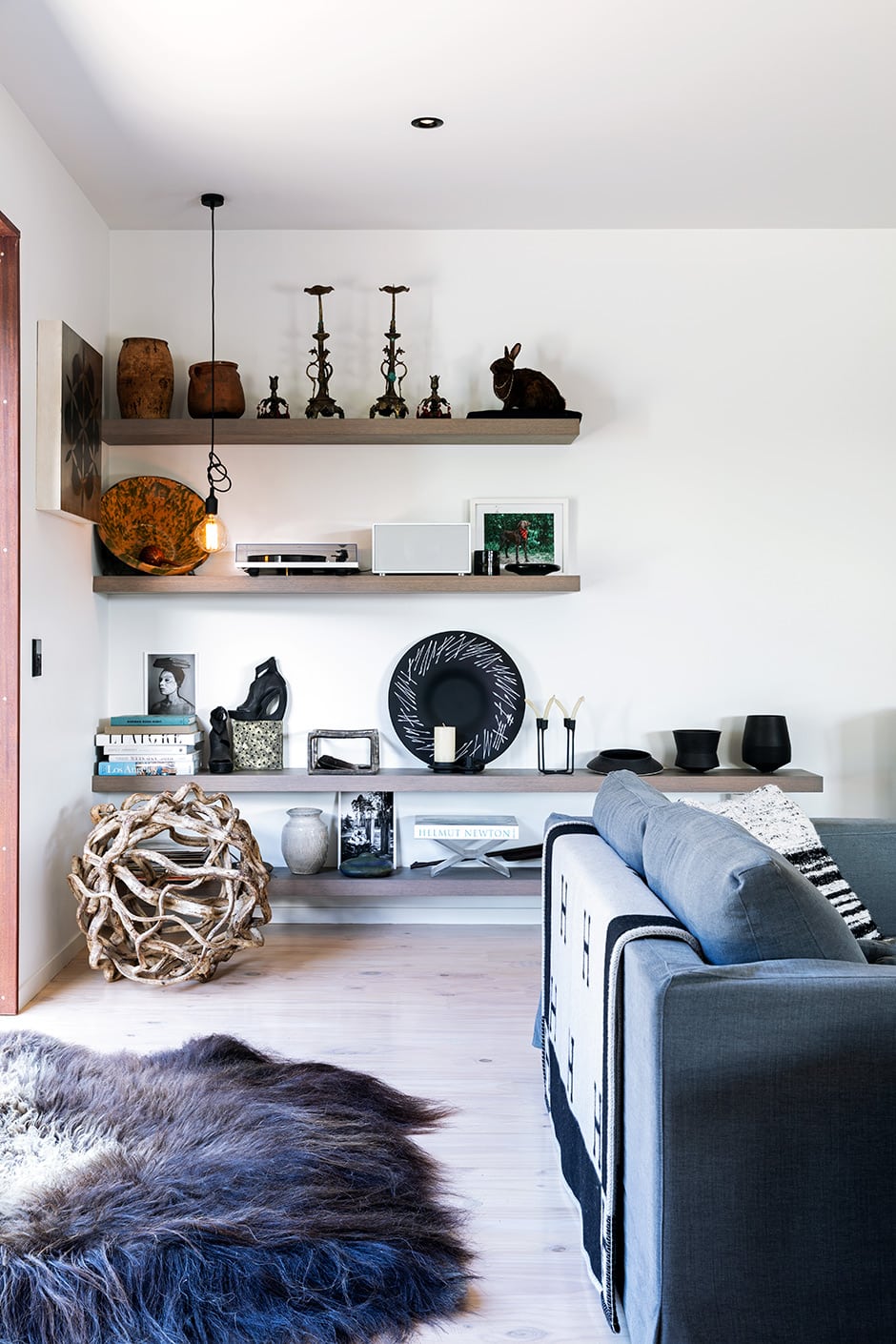 TOP Also in the main house, sofas from Dawson & Co and a stool by Franco Crea gather around the Studio 3 fireplace by Stovax. ABOVE More mementos from Jackie’s travels are arranged in compelling vignettes on the oak-veneer floating shelves in the main house’s living area. A spherical sculpture found in Sydney sits on the floor here next to a musk ox hide brought back from Greenland.

Working with the existing lie of the land, the building platform for the main house took advantage of a flat spot on the slope, so construction was able to get underway without too much excavation. Meanwhile, Jackie had already started work on the interior. “I’d lie in bed at night designing everything in my head before I went to sleep,” she says. “I bought all the furniture before the drawings were even finished, and knew where it’d all be going when I moved in — the sheepskins under the chairs, the coffee table backing onto the couch… I don’t know how, but I have an ability to map things out in my mind and visualise spatial design really clearly.” 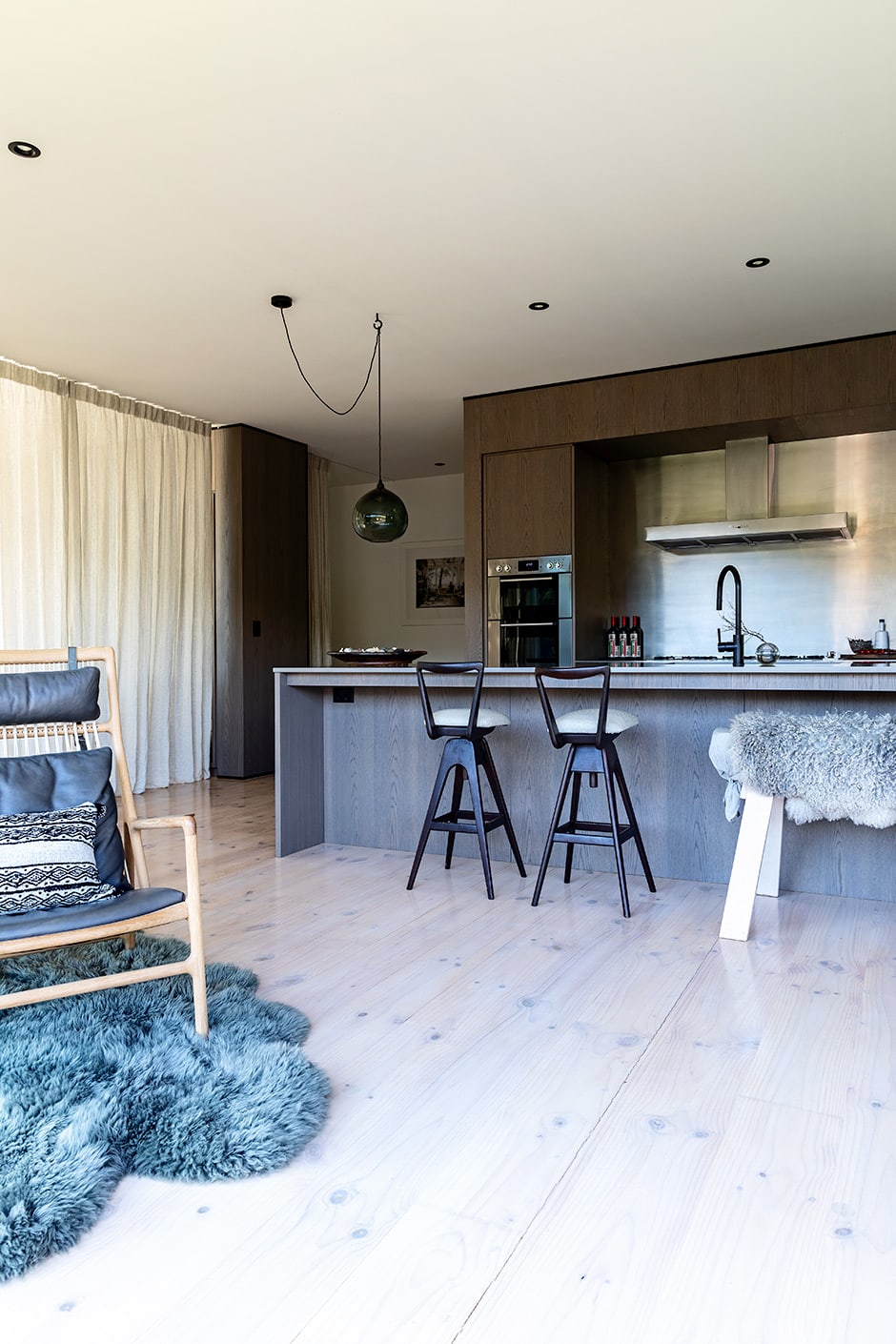 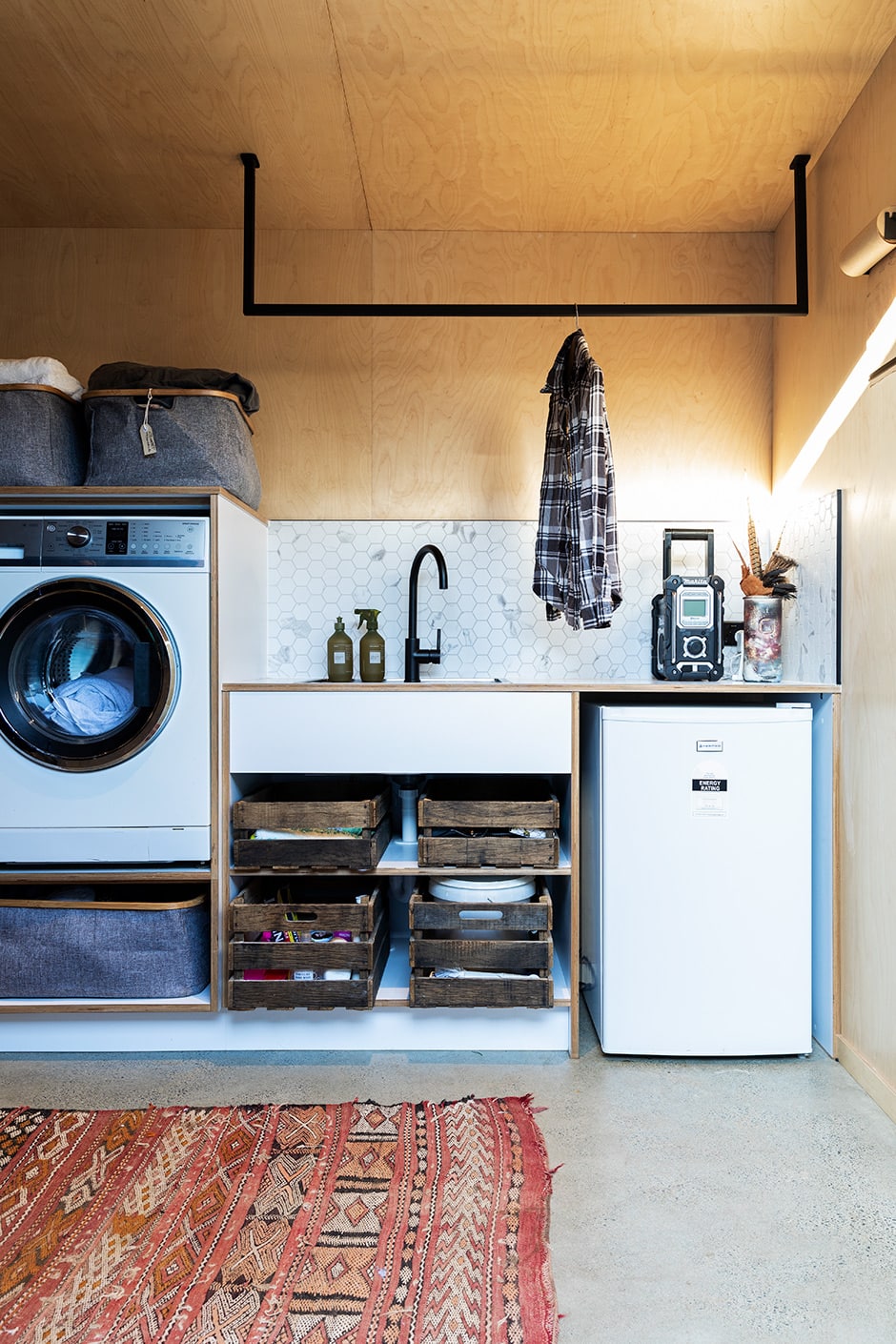 TOP In lieu of an indoor dining table, the generously sized island in the main house, with its Corian benchtop in Ash Concrete, serves as a spot in which to eat. Along with the oak veneer cabinetry, it simplifies this space so the view is the hero feature. The pendant light is by Monmouth Glass Studio. ABOVE The laundry lives in its own little building along with a guest bedroom/office and a workout/yoga zone.

On her adventures abroad, Jackie had the foresight to buy a couple of Arctic tents in Alaska — the kind made from canvas and steel — in anticipation of living on an empty block of land while building her forever home. They provided the first roof over her head on the site. Being outdoorsy, Jackie gave campsite life a good nudge for the best part of a year while the house was being built — until one night when a storm sent trees and mud down the hill and forced her into upgrading to a couple of portacoms until her home was finished. 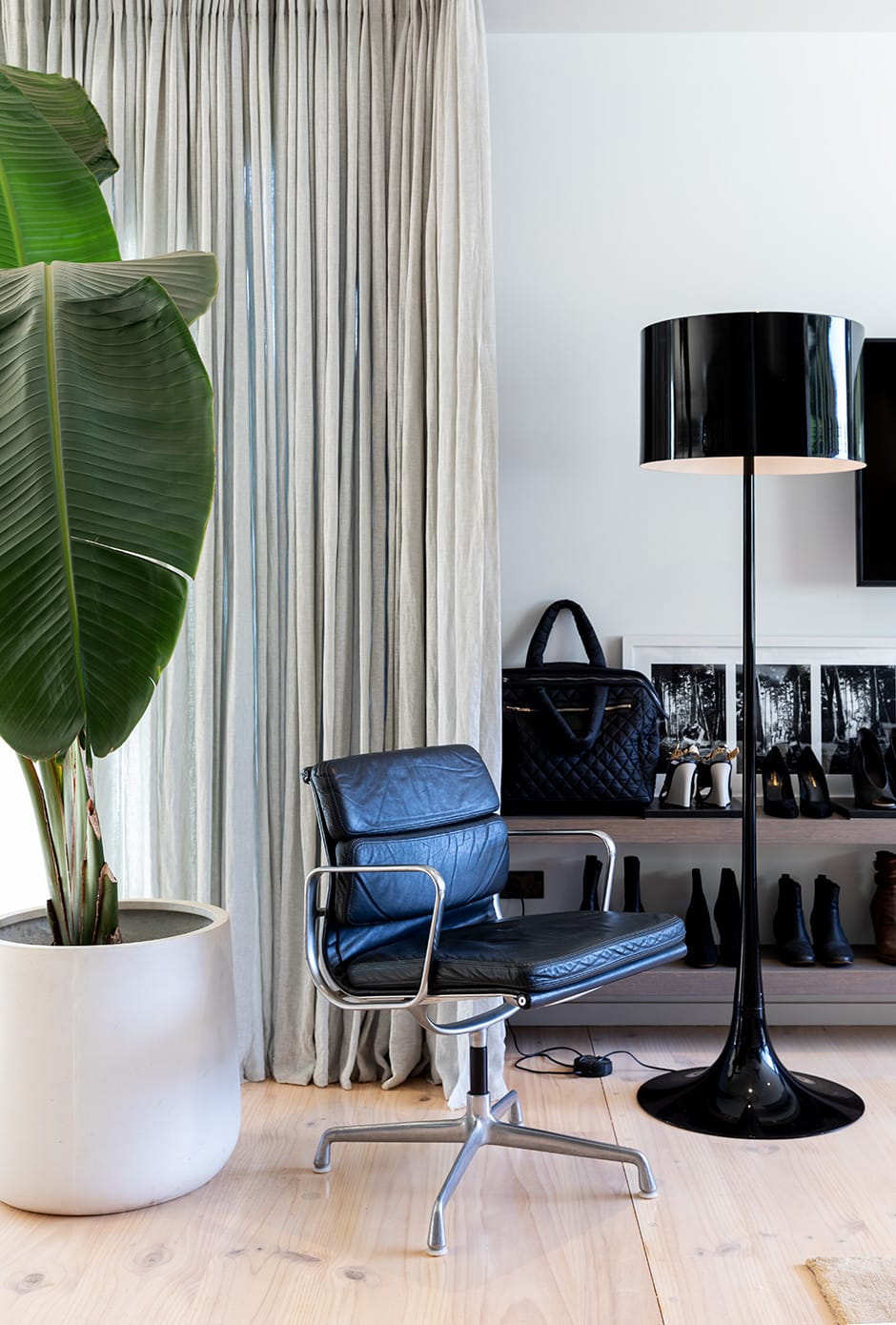 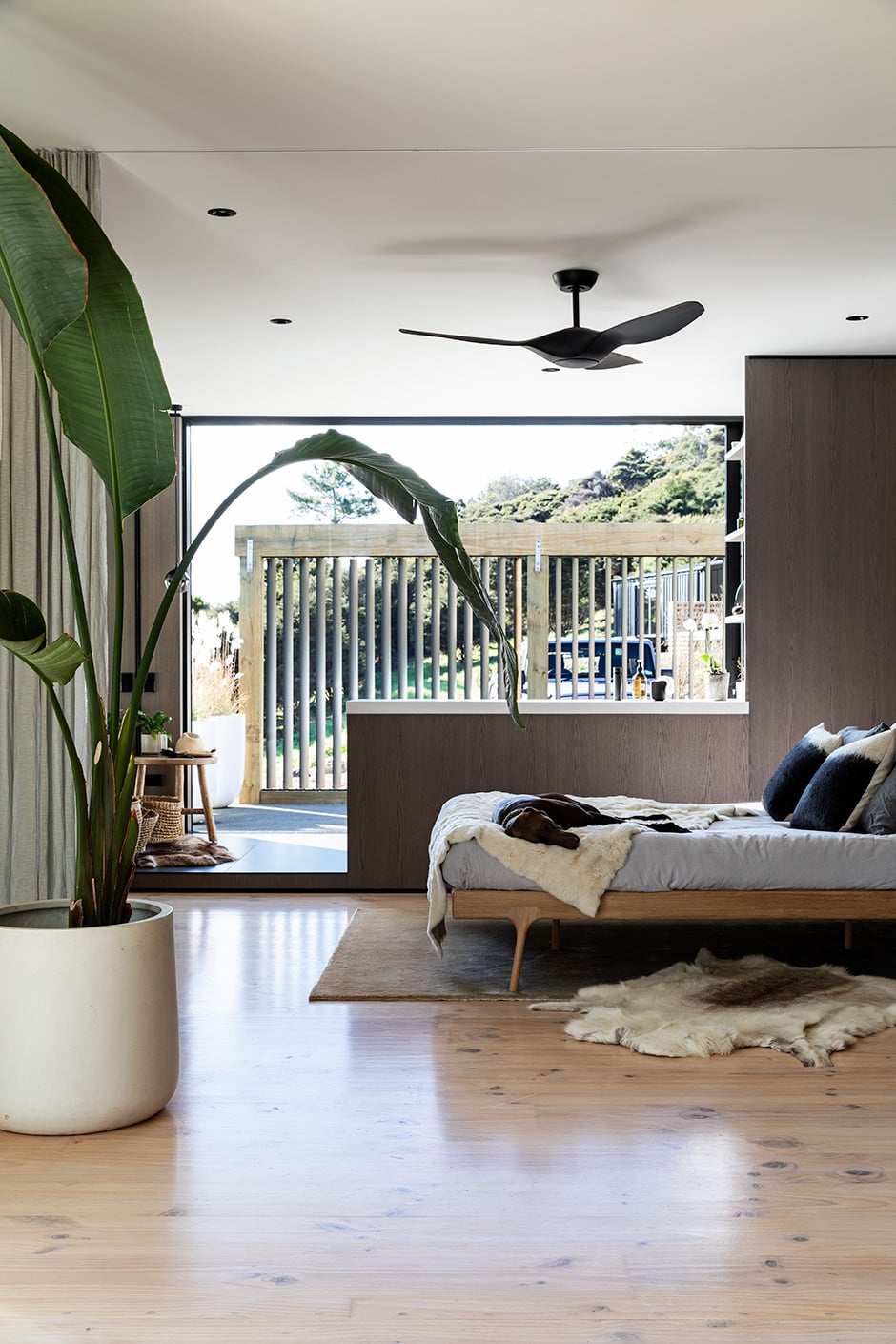 ABOVE In the sleep space in the main house — which can be cocooned off from the living areas by curtains in Kyoto linen from James Dunlop Textiles, hung on a ceiling track — a chair by Charles and Ray Eames for Herman Miller and a Flos lamp from ECC are arranged beside a potted banana palm.

Three years of hard slog later, the comfort and cosiness of Jackie’s new place, which she’s named Fleetwood, is a well-deserved reward for the toil of building in a remote rural location. Bar the scullery and toilet, the one-bedroom main house is open-plan. Entering from the rear of the home, you move from the entryway into a pavilion containing a bedroom and bathroom at one end, the kitchen in the middle and living at the other. Instead of walls, curtains have been used to delineate between social and private spaces. A subdued monochromatic colour palette in various shades of grey helps to visually soften the lines of the shed-like building, and layered collectables and textiles create lots of different nooks for extra interest. 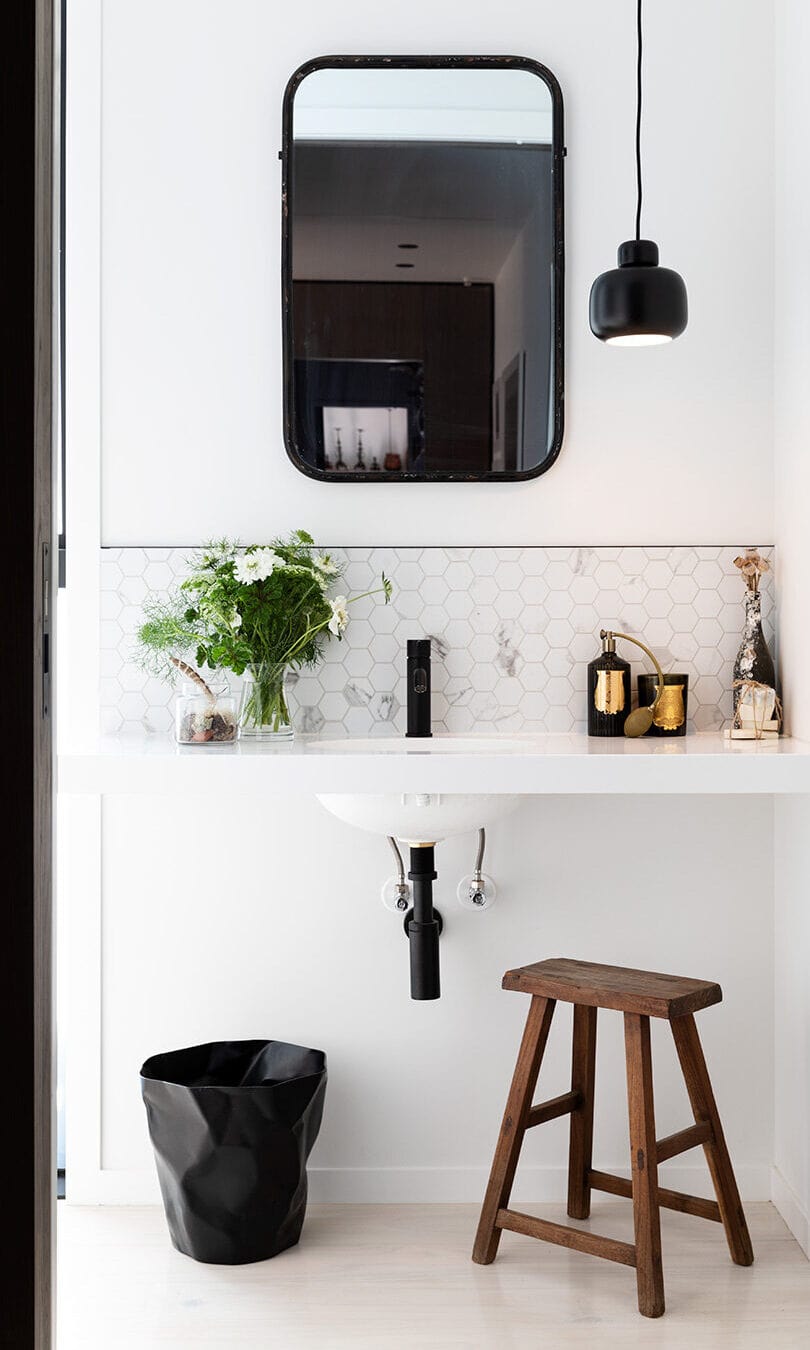 ABOVE The guest toilet is the only room in the main house that has a proper door. It’s decorated with a junk-shop mirror, Stone pendant light by Woud and a sweet splashback in matte hexagon mosaic Carrara tiles from Tile Space.

Jackie has an eye for special finds, and her interior aesthetic pairs natural materials with vintage pieces and sculptural objects to create a home that belies the practical rural vibe the house and studios present from the road. The seamless transitions between indoor and outdoor rooms also demonstrate a unique way of living here. The house is bookended by exterior spaces designed for daily bathing rituals: the plunge pool where Jackie takes an ice-cold dip every morning and the bath in which she unwinds under the stars at night. 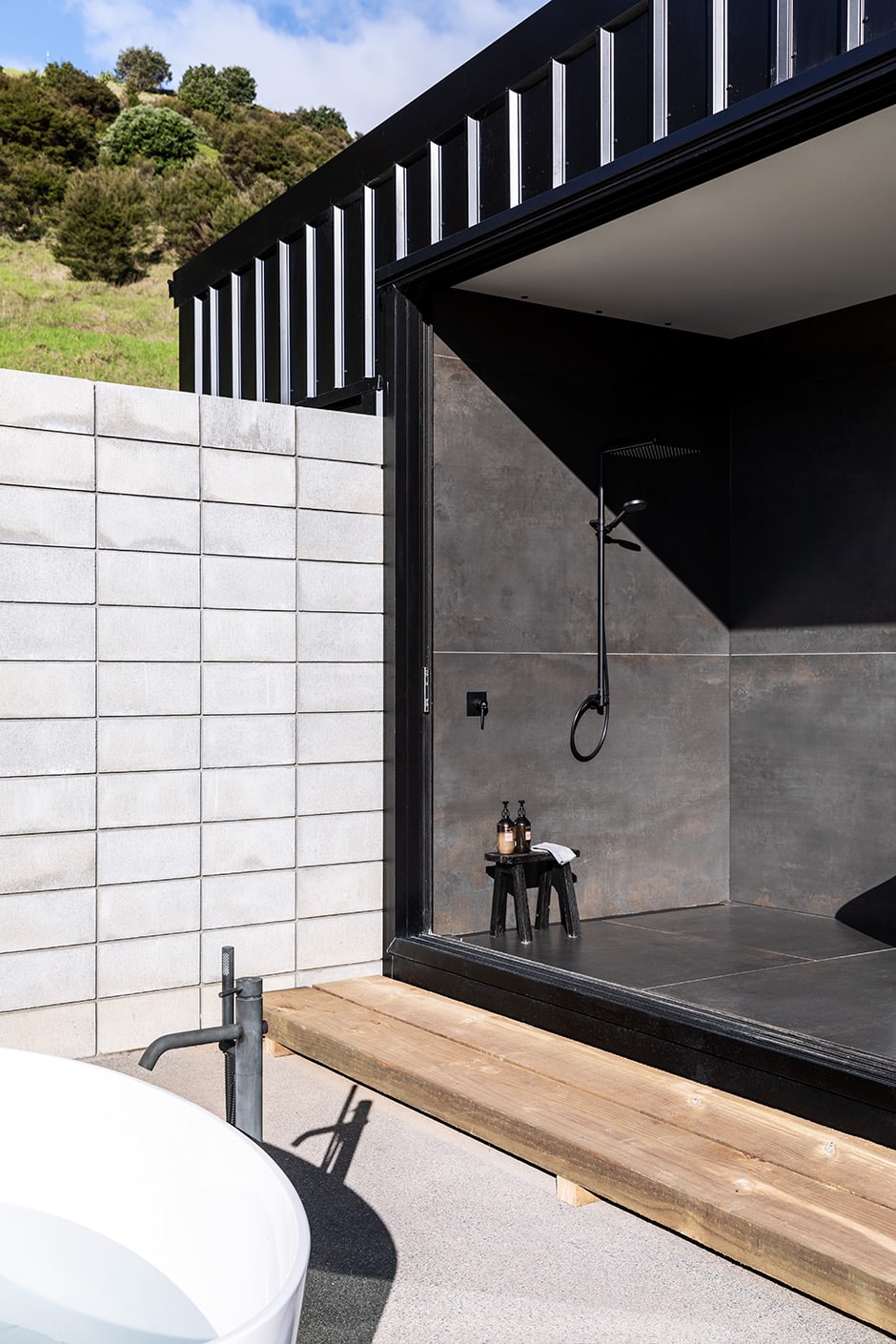 EXTERIOR Large-format Metaline Iron Matte tiles from Tile Space line Jackie’s walk-in shower, with Sanremo tapware by M+Z Rubinetterie from Franklin. It opens onto the outdoor bathroom that has a louvered wall on one side (not pictured) and cinder blocks on the other for privacy. The freestanding Cleo bath is also by Marmorin from Franklin.

The laundry, a guest bedroom/office and a workout space are housed in a separate building connected to the main house via a covered courtyard, which is also home to a fire pit and has a place in which to put a projector for movie nights. Add to this the barbecue area, which is really more of an outdoor kitchen and dining room, and Jackie really has thought of everything to create a year-round entertaining hotspot.

EXTERIOR Gazzda outdoor seating from Dawson & Co looks cool under the pergola that shelters Jackie’s outdoor kitchen and dining area. The only neighbours within earshot are of the avian variety, with kererū, pīwakawaka and hawks frequently flying by.

Mirroring the roof form and open-plan concept of the main house, twin one-bedroom studios stand a stone’s throw up the hill. Each has its own outdoor area and log fire inside, making them a delicious recipe for unwinding all year round. 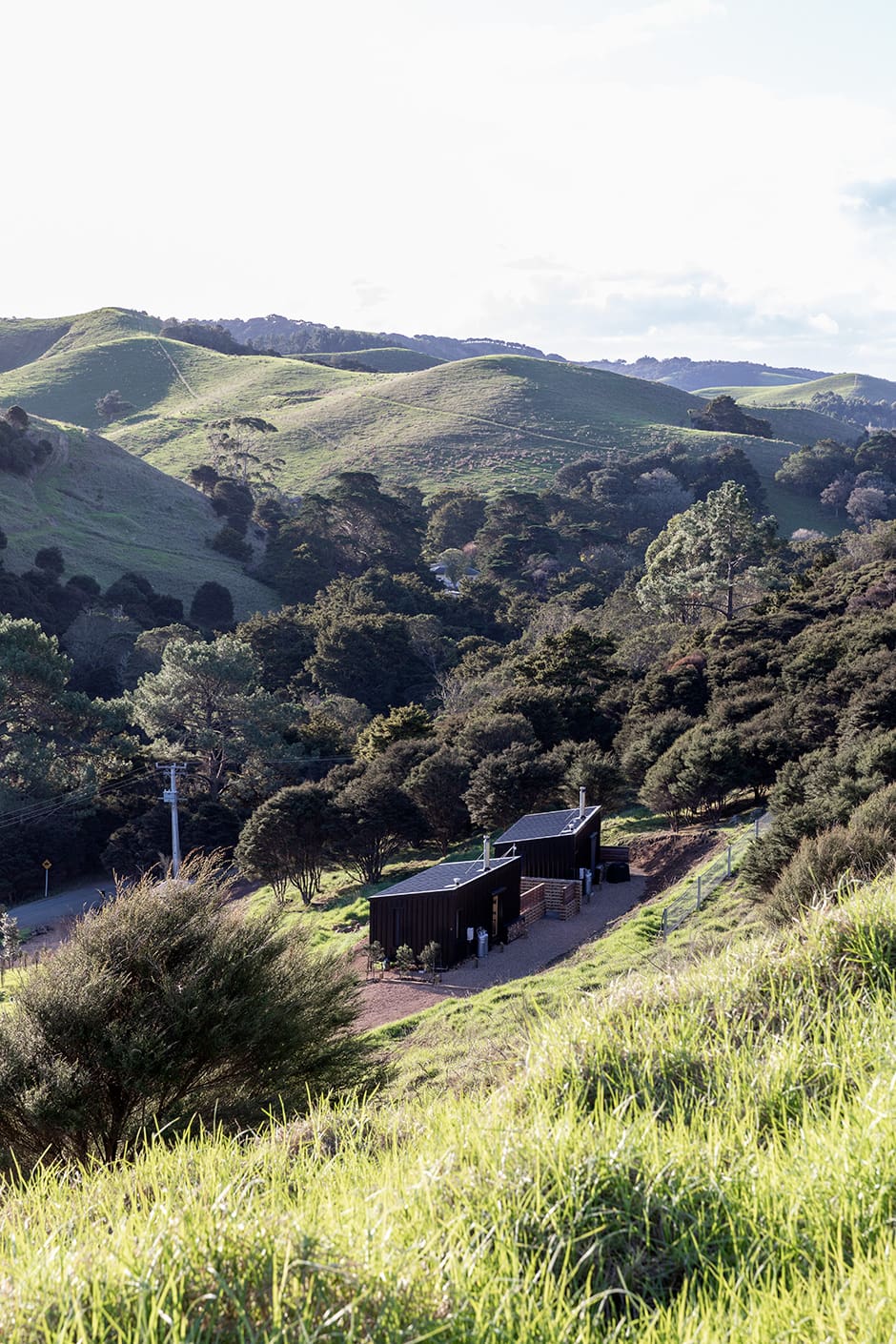 TOP Outdoor bathing is a thing morning and night for Jackie, who starts each day with a dip in this pool designed and built by builder Peter Davidson and ends it in her outdoor bath. ABOVE The view from the hill behind the house and studios, where Jackie has created a viewing platform from which to see the sea. It’s the perfect place for an evening drink, too.

With Poderi Crisci restaurant and vineyard a short walk down the road, you don’t have to travel far to enjoy what the rest of the island has to offer on a weekend jaunt here. It’s no wonder Jackie’s family and friends are among the regular visitors who stay at Fleetwood (you can book at fleetwoodwaiheke.com and through Airbnb). 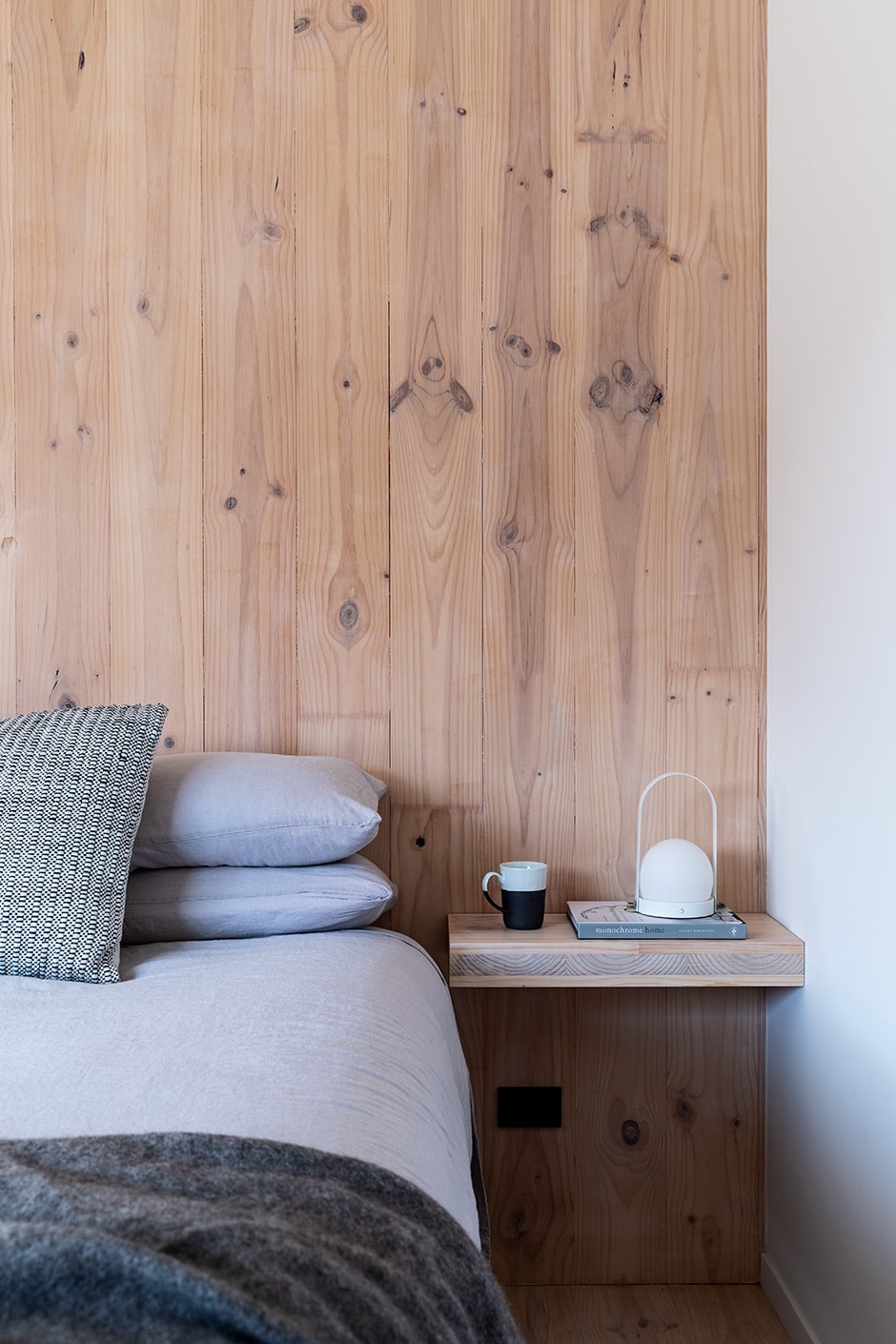 TOP Like the main house, the twin studios are clad in Espan 340 in Ebony by Metalcraft, but Xlam cross-laminated timber painted with Resene Colorwood Whitewash lines the walls, giving them an interior identity of their own. Bedding by Nest makes bedtime a beautiful experience, while Carrie LED lamps by Menu double as lanterns if guests are out after dark. ABOVE “I’ve always been drawn to gabled, barn-like forms, yet for some reason I drew houses with mono-pitched roofs here,” says Jackie. “But when you stand back and look at the outcome, this profile is much more fitting against the ridge of the mountain.”

Since the main structures were completed, Jackie has gone on to build an additional satellite bedroom for her sister, Nicola Salter. “It’s quite lovely that we can keep adding things as we need to,” says Jackie. “There’s now a bar, a pétanque court and a studio for painting, and I’ve got a massage studio, a glasshouse for growing vegetables for guests to eat and a chicken coop on the way as well.”
The main house may be a one-woman residence, but there’s plenty of space in which visitors can gather and relax here. 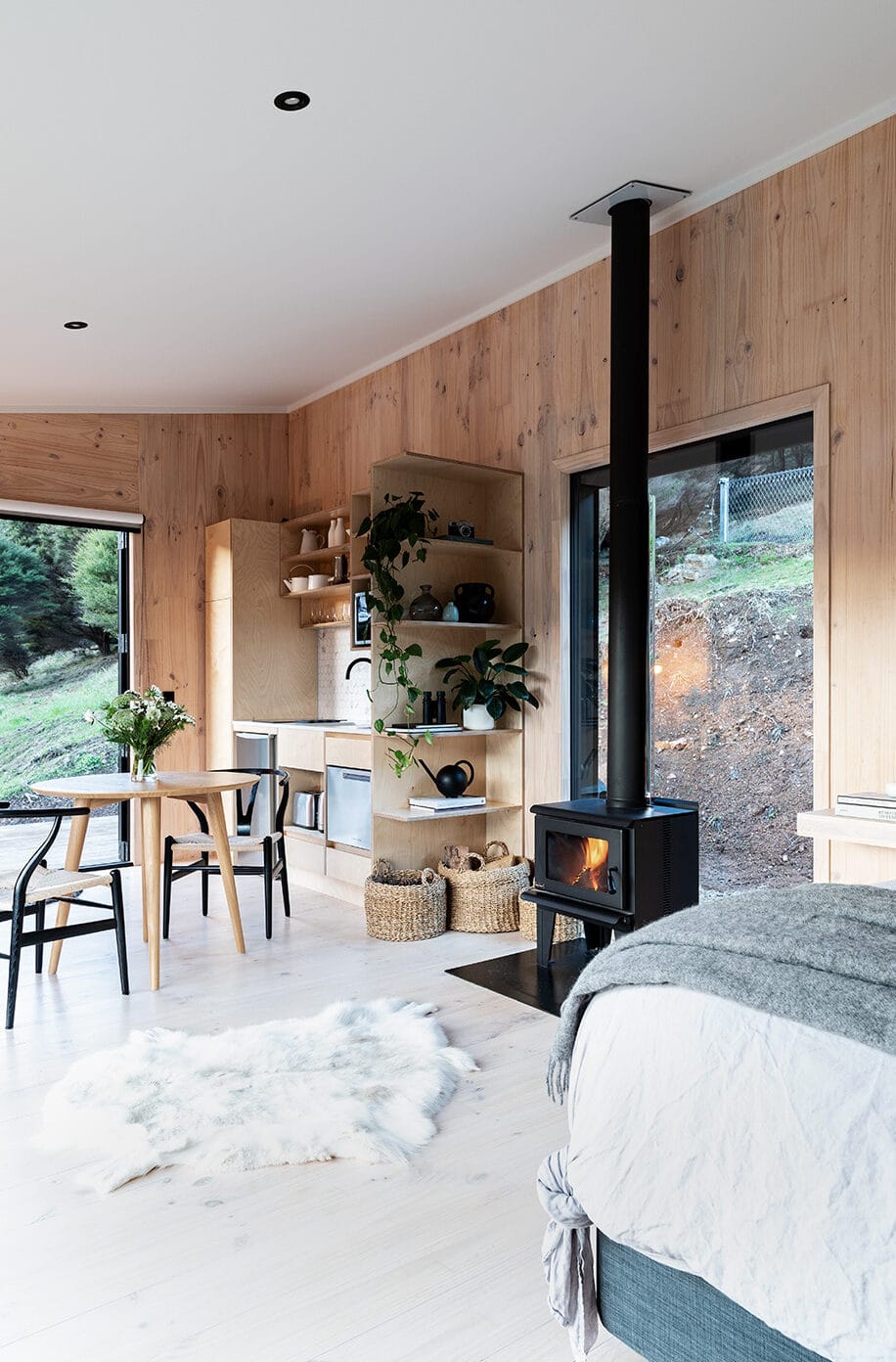 STUDIO The studios’ open-plan layouts follow the lead of the main house. When their Benmore fires by Kent are on, the interior mood is cosy Scandi chic, and blackout blinds mean you can sleep in as late as you like.

“The house was made for me, but the idea is that the whole property could be rented out for a wedding party or family event,” says Jackie.
“It’s a simple yet elegant house; there are no complications to living here, and I think that’s really important,” she continues. “There’s no wasted space, I use all the rooms, and everything works really beautifully. I can drive my truck right up to the front door without getting wet, and I don’t have to haul my groceries up any steps. And that’s very much Waiheke — island life requires practical necessities to make every day as easy as possible.”