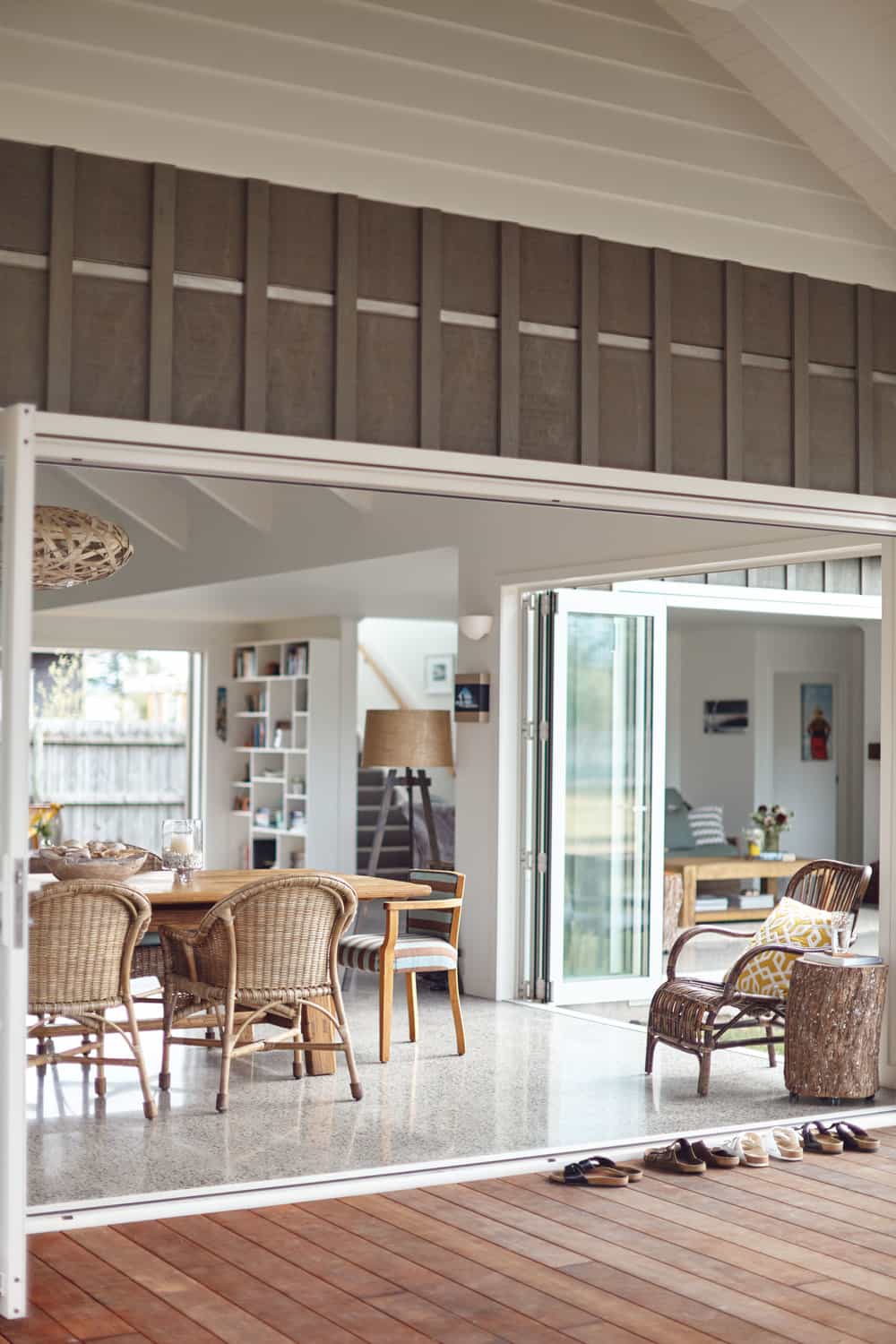 Usually, when people build to accommodate a ‘growing family’ they are talking about kids. But a family with six grown-up children also requires a fair bit of space.

The pair had been holidaying in their original Matarangi beach spot with their
six kids for years, before admitting two years ago that with those kids fully grown and bringing friends and partners along for holidays, it was officially bursting at the seams. “To house our extended family we need a lot of space,” Mark says. “Inside, as well as space outside to pitch tents.”

Mark and Diane loved their original holiday house with its pool and proximity to the beach – but the time had come to let it go. “We would have had to undertake a major renovation to accommodate everyone,” Diane says.

So when opportunity (otherwise known as a buyer) knocked, they sold it furniture and all and started afresh. “Luckily we came across this section that was one of the only ones in the area that was big enough for us, while still being within walking distance from the beach,” Mark says.

Diane had a fair idea of their wants and needs, so she sketched up plans, recreating the best aspects of their original holiday home. A large kitchen and dining area connected to a covered living area outdoors were at the top of the list, along with a bunkroom downstairs. But when it came to connecting the ground floor with their plans for a master bedroom sanctuary upstairs, they drafted in the help of draftsman Marcus Bonk of Huis Design. He helped them piece together the overall flow and refine the design.

Building in the Coromandel can be fraught with difficulties – from transport costs, to the reluctance of some builders to provide fixed quotes. So Diane and Mark felt very luck to secure the commitment of local builder Darren Walker to the project. “Having someone local that we could trust to project manage the build while we were at home in Tauranga was key to the process,” says Mark. “Not only that, but Darren also has a storage facility down the road, and generously oversaw the delivery of • building materials as well as purchases for the interior throughout the process.”

“We bought all the appliances, furniture and big-ticket items over the course of the build, so when we were finally able to start moving in, seven months later, it was like Christmas,” Diane adds.

The detailing of the finished result is testament to Darren’s high level of craftsmanship. But, as with many builds, the budget was blown along the way – although the couple were okay with that. The board-and-batten exterior was initially chosen as a method to keep costs down, but Diane and Mark didn’t realise that installing this cladding would be very labour-intensive. “We didn’t want to skimp on materials though, as we were focused on the big picture,” Mark says. “It’s a pretty tough environment next to the beach, and we needed to make sure we were future-proofing the place, as we’re in it for the long-term.”

When it came to the interior, Diane relished the opportunity to design her dream kitchen and entertaining space, complete with an expansive island bench, groove-ply cabinetry, industrial-style lighting, and an easy-access scullery with a generous butlers’ sink. “It’s big enough to bathe the grandkids in one day,” she laughs.

The concrete floors are not only hard-wearing, they also provide a thermal mass for passive heating from the light that streams in from the floor-to-ceiling bifolds surrounding the open-plan living area.

With heating in mind, Diane was an advocate for installing open fires, managing to talk Mark into two large Warmington fireplaces for both the lounge and outdoor living room – despite his disinterest in chopping firewood. With family and entertaining at the core of the bach’s purpose, they can often all be found outside relaxing fire-side in the evenings, indulging in the new family tradition of whipping up a batch of pizzas to cook in the outdoor pizza oven.

Looking around, you can see that, finally, there is space for everyone – and those ‘one day’ grandkids too.