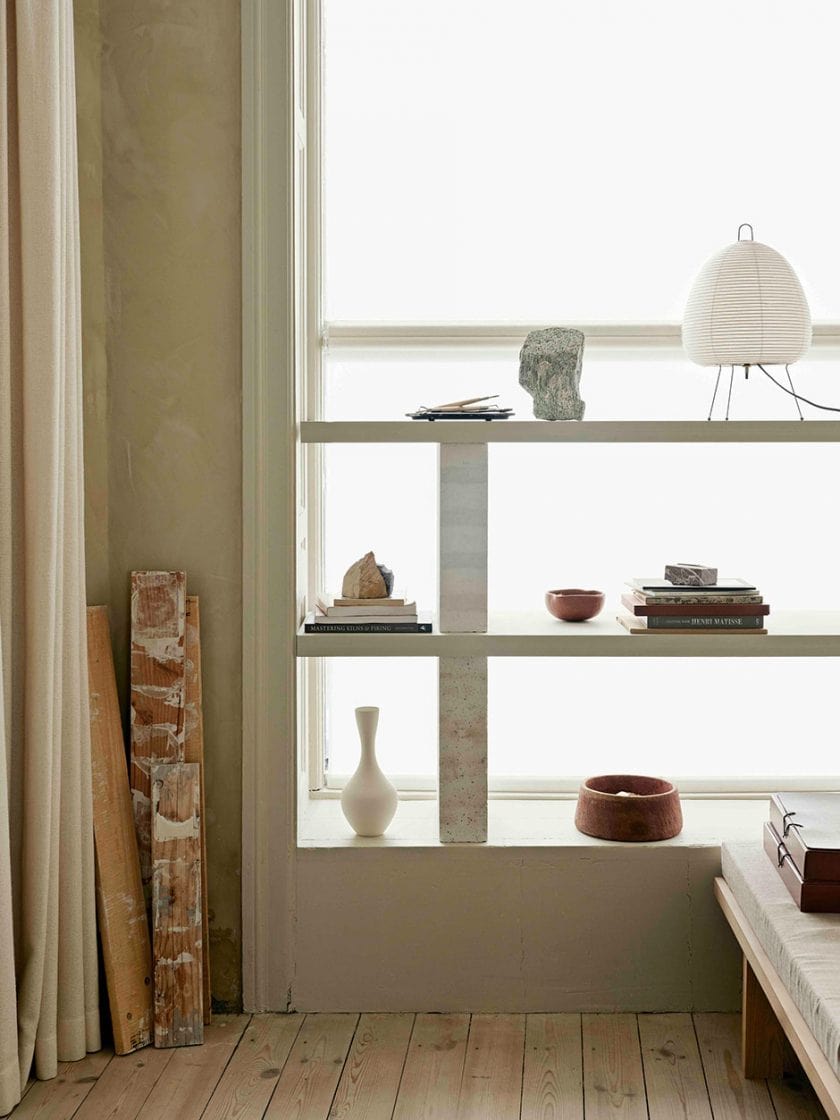 The founder of multidisciplinary Danish design brand Frama, Niels Strøyer Christophersen, is known for design that embodies the contemporary longing for the simple life, quality materials and sense of inner peace found through a mindful interior. The one-bedroom apartment he shares with his New Zealand-born wife Franca-Christina Christophersen in Østerbro, Copenhagen, exudes a special kind of toned-down, urban elegance and is a lesson in making a little more effort with something as important as your home and the life you live in it. 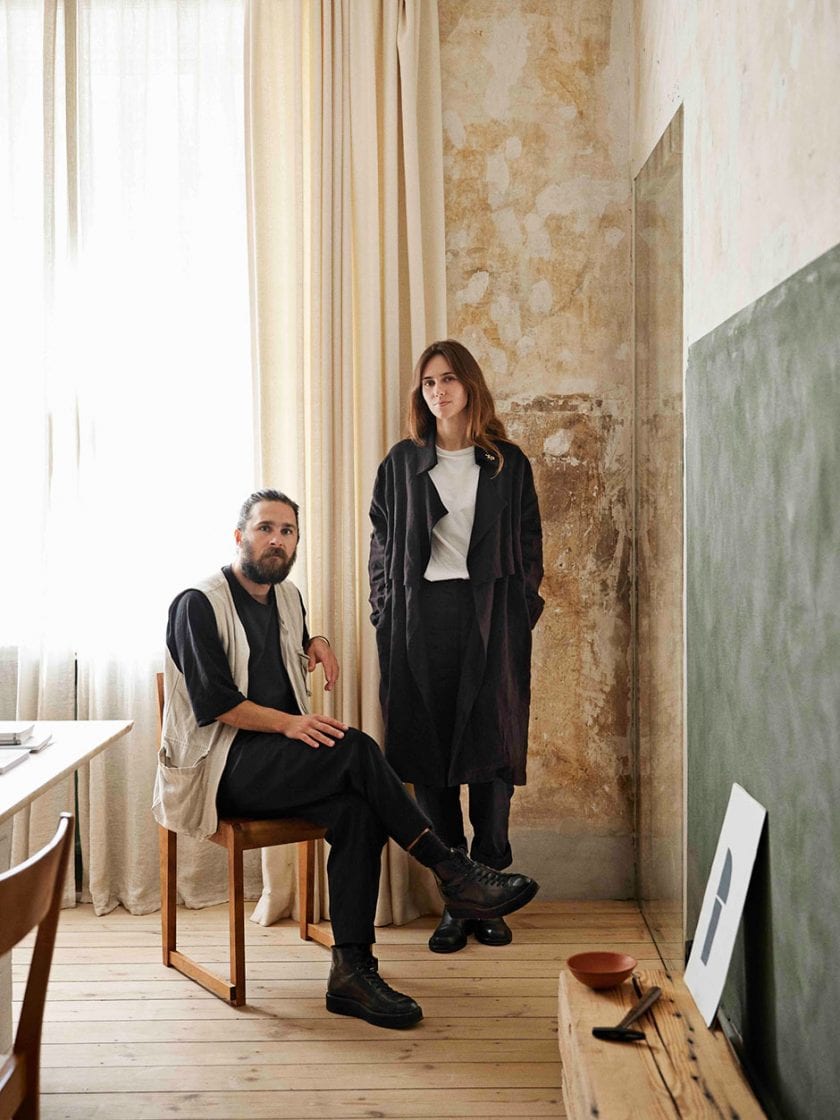 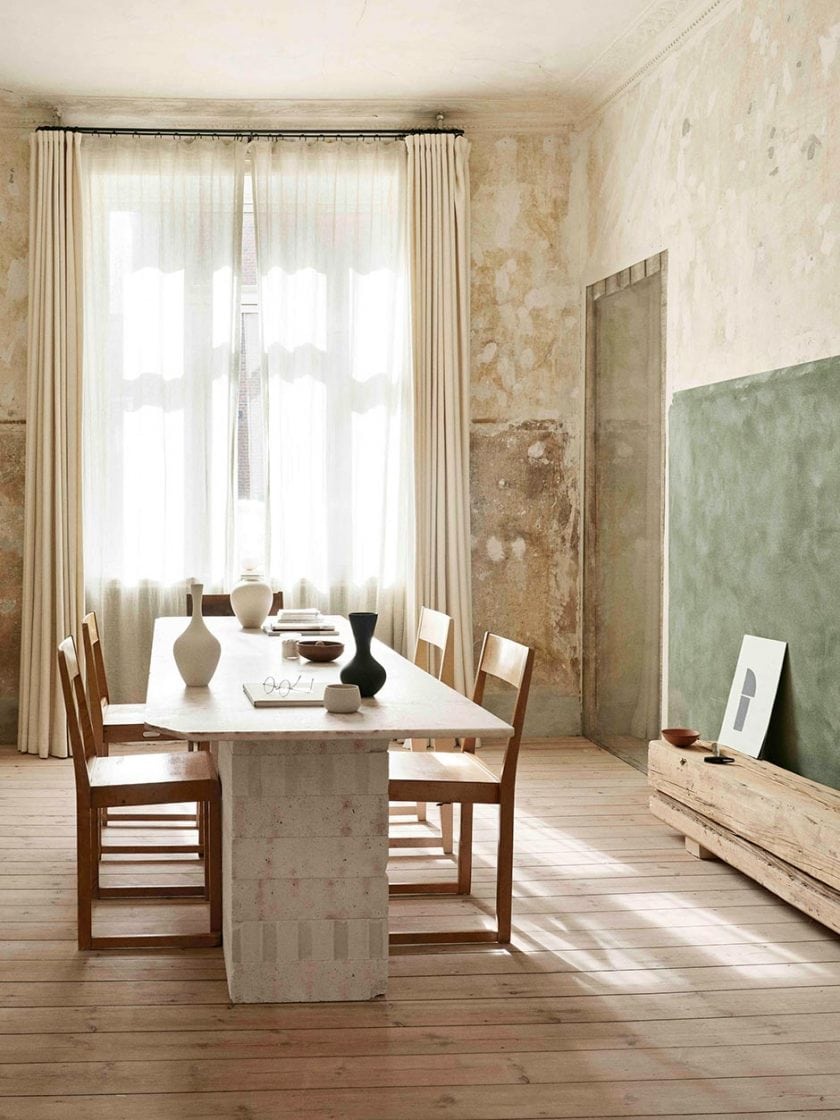 ABOVE Sunlight drifts into the dining space through tall windows shrouded in curtains from Dedar Milano, gently interacting with the muted, nature-inspired colour palette and creating a sense of balanced serenity. The table (a marble slab set on stacked gypsum blocks) is dotted with Franca’s ceramics and teamed with 01 chairs by Frama, simply shaped pieces that express the couple’s love of clean, uncomplicated design that never speaks louder than an object’s function. “Copenhagen is a small city but has dense creative opportunities,” says Franca, who graduated from her two-year apprenticeship at Tortus Copenhagen last year. “It’s very supportive of the arts, so I constantly find myself eager to be working in my studio or on a collaborative project.”

Truth be told, Niels is more interested in behaviour and emotions than he is in design, the people who create it and the objects he and Franca decorate their home with. According to him, most people really only need half of what they own, and what ultimately matters is how we feel when we’re in a room. He says simplicity creates peace and is essential to finding balance in modern times.
“The way a room is decorated does something to us, often without us being able to put our finger on what it is or why, and I like the idea that it’s our intuition and emotions that really control us. Nothing in our home is chosen based on what would be a practical and logical solution — instead, it’s about learning to be present in the moment and appreciate what surrounds you.”
He notes that he and Franca don’t own a sofa on which you can put your feet up or a TV to unwind in front of — the very definition of relaxation to many of us. But that’s what meets their needs. 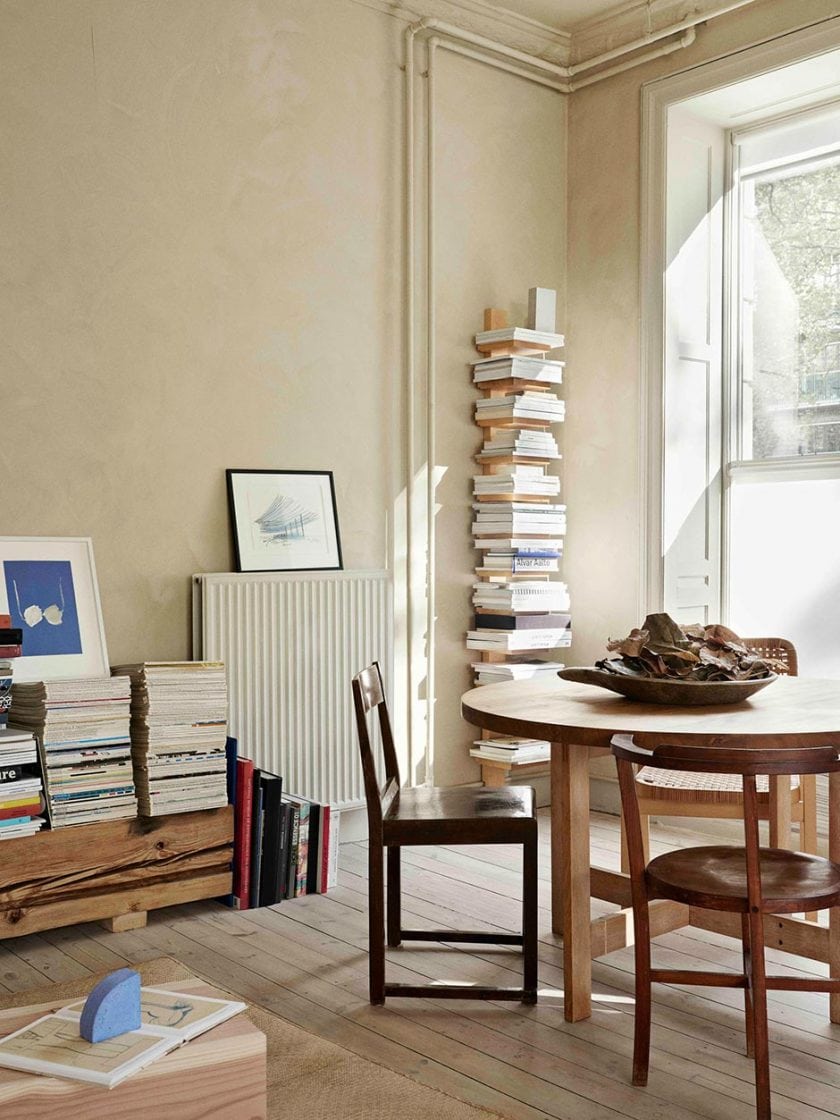 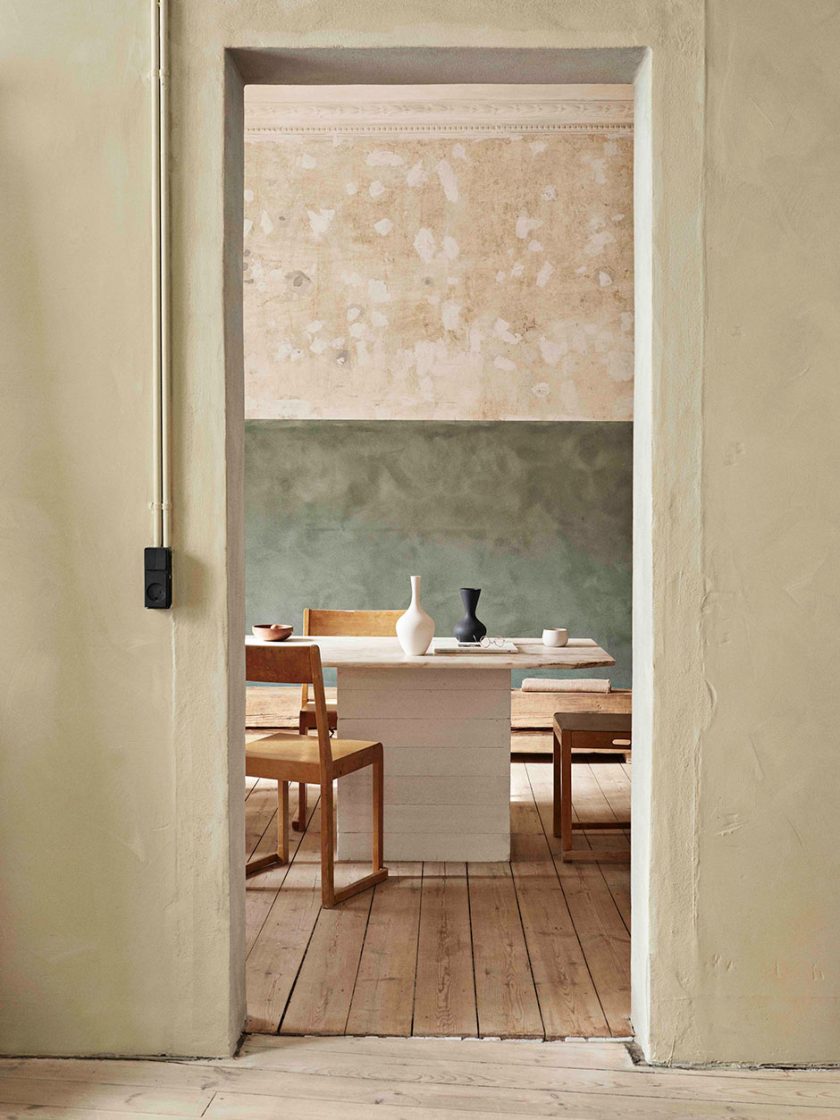 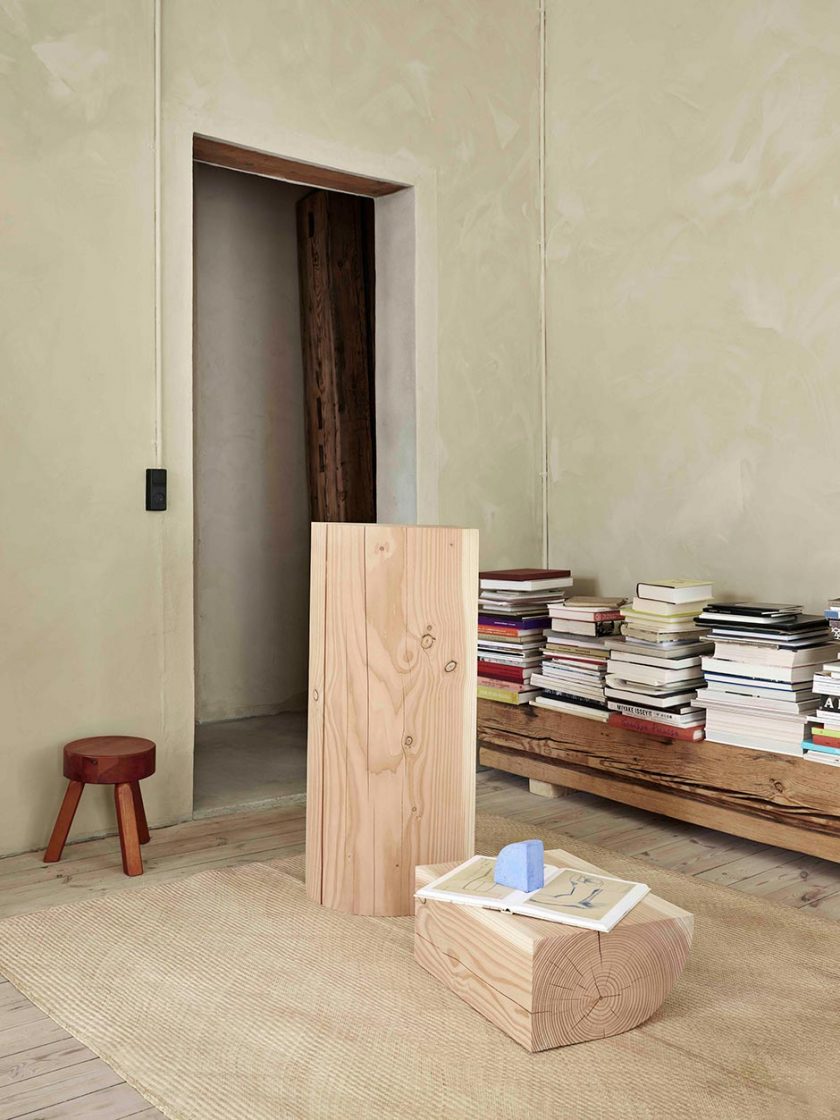 TOP Niels designed this Farmhouse table himself and produced it through Frama. As well as an 01 chair, the vintage seating around it includes a Swedish orchestral chair, a chair brought home from Budapest and a classic design by late Finnish architect and designer Alvar Aalto. MIDDLE A contemplative view of the dining space from one of the two living rooms. ABOVE Books on architecture, art, design and philosophy play an important role in Niels and Franca’s décor, and here they’ve stacked them on a timber board retrieved from a demolished local building. Two more pieces of solid wood, designed by Frama as a set of simple sculptures and titled Strandboulevard Form, have been sanded to a smoothness that invites you to run your hands over them.

The emotional approach the couple has taken to the interior of their 1905 abode also means that a worn stepladder and a pair of boards stained with clay are just as valuable as their classic Alvar Aalto chair and Noguchi lamp. Niels doesn’t care much for the way some people fawn over award-winning designers. “At Frama [which is available in Aotearoa at Slow], we’ve never been concerned with name-snobbery and fame — and that also applies to my home,” he says. “If something’s here, it’s because it works and feels right.”
Funnily enough, Niels didn’t always feel this way. Before moving in here and even longer before he met Franca and invited in her aesthetic, he lived in an all-white apartment decorated with smooth, futuristic-looking furniture by celebrated designers such as Philippe Starck, Jasper Morrison and Piero Lissoni.
“I needed to break out of it, because my life felt imbalanced,” he says. “My home was a backdrop emptied of any real content, and none of it was truly me. My passion for interior design was present, but it wasn’t as personal or experienced and, most importantly, it wasn’t filled with the same joy and tranquillity as today.” 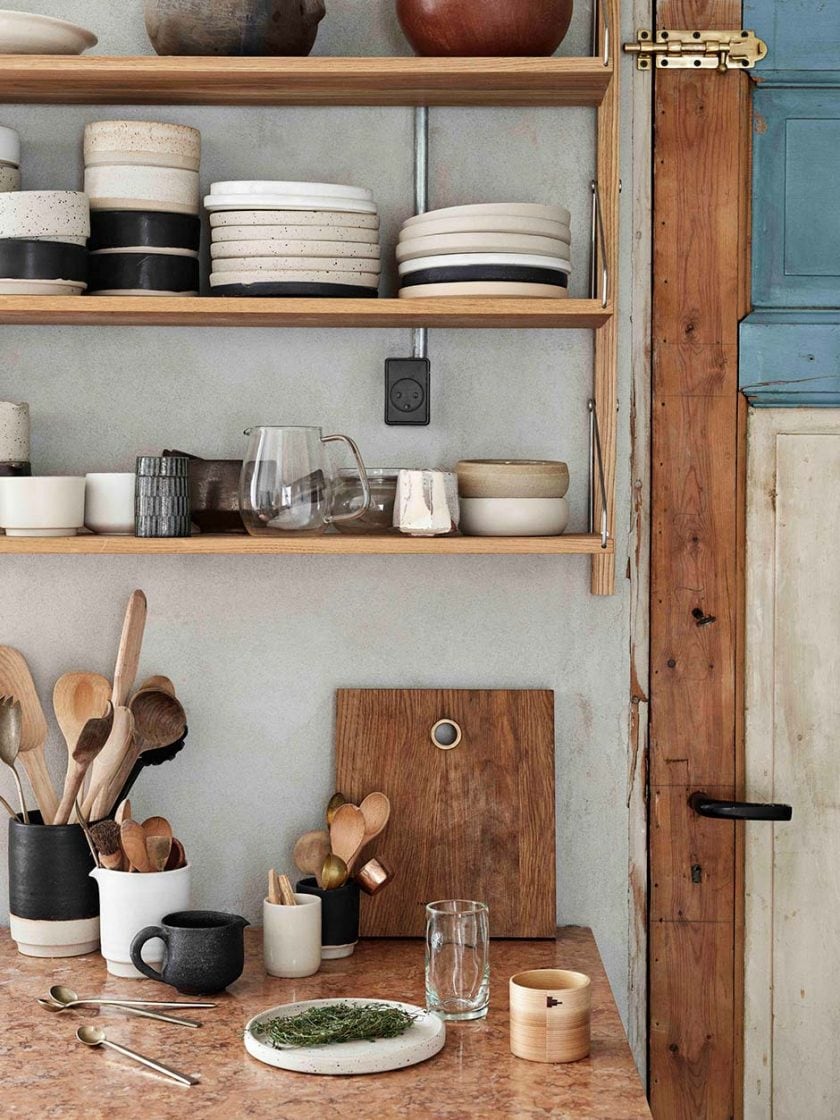 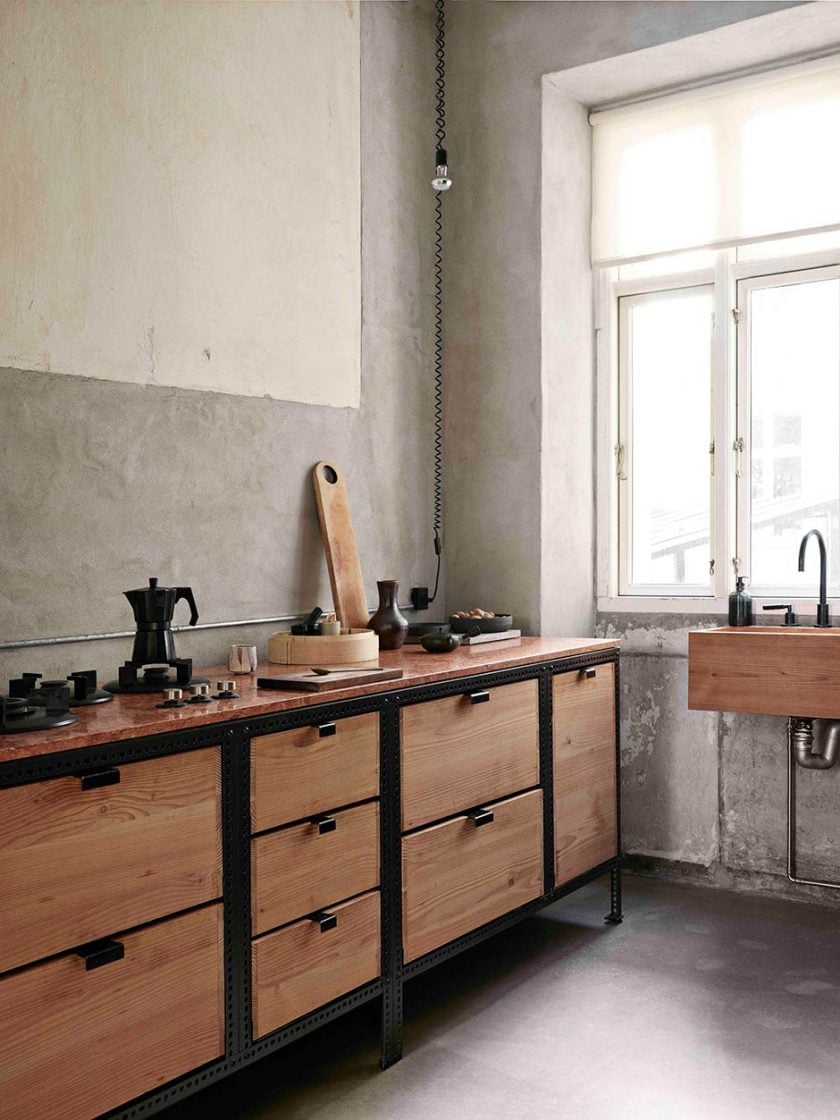 TOP Frama’s The Shelf was made to fit the width of the kitchen wall, then filled with Franca’s ceramics mixed with gifts and travel finds, including brass spoons found in Tokyo, jugs brought home from Korea and Japanese cedar cups that Franca’s father bought them as a wedding present. ABOVE The kitchen also features marble-topped, metal-framed Douglas-fir cabinetry, custom-created by Frama along with the timber sink that forms a natural extension of the drawers. “I adore the fluidity in our kitchen,” says Franca. “The layout is simple and the design is reflective of a purpose, without unnecessary elements. I often think of it as a blank canvas.” The wall here is an example of a surface that most would regard as uninteresting wear and tear, but which in her and Niels’ home is allowed to appear in all its arbitrary beauty.

This apartment became not only a home, but also a personal project about honesty, through which Niels found his way back to something more basic and meaningful. First, he removed the wallpaper, leaving the walls exposed and raw. Then, he began to create a universe in which the colours come from nature, décor items are chosen from an emotional standpoint and function is a key focus.
“I care about understated and humble objects that carry out their function,” says Niels. “If there’s a small scratch or dent in something, it still has the same value — perhaps even a higher one, because then it’s more unique.” 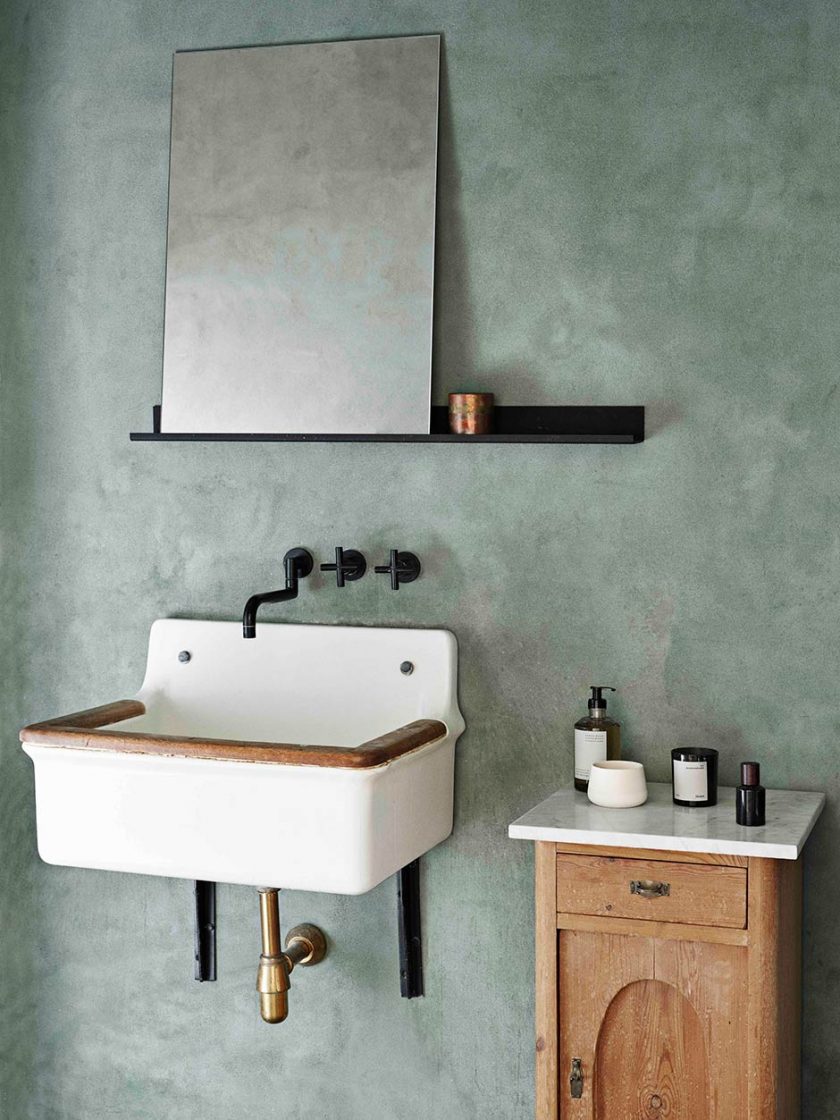 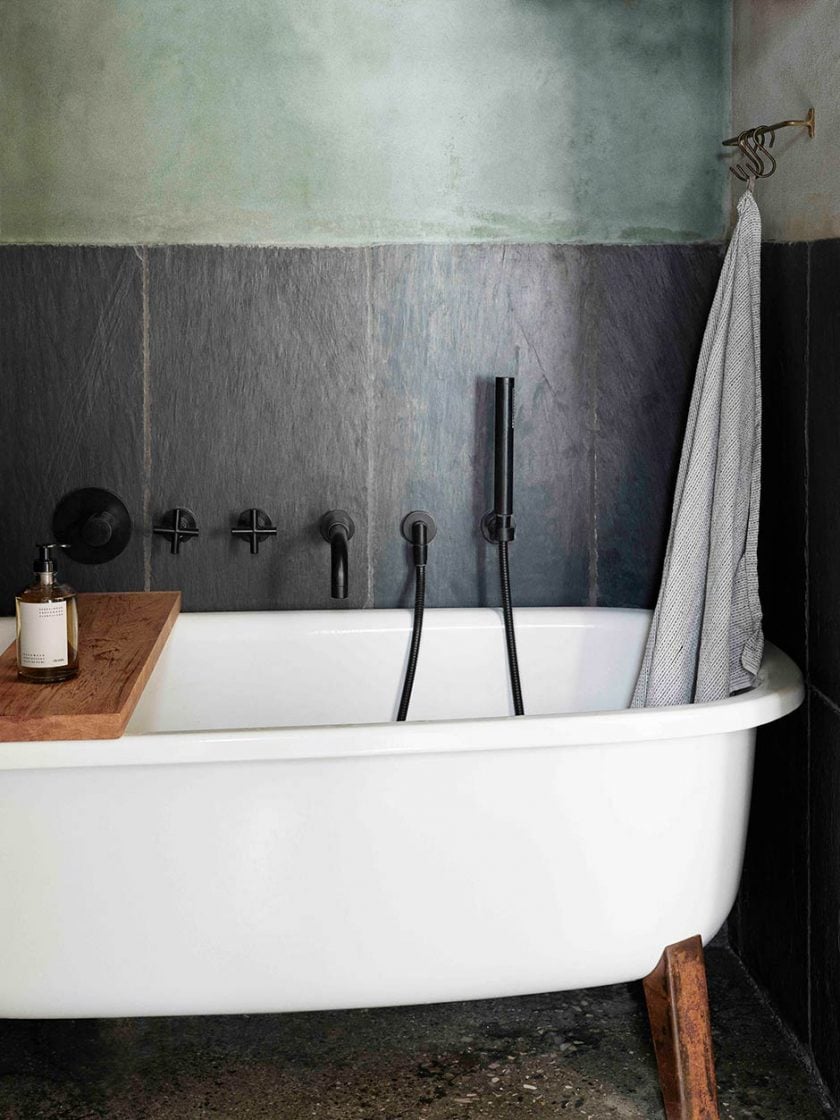 TOP “Tranquil” and “humble” are words Franca uses to describe their dimly lit bathroom, which “doesn’t ask for much”. Its minimal, functional fixtures include an MS-1 mirror shelf by Frama, a recycled sink and a marble-topped cabinet for storage, on which sits soap and a scented candle from Frama’s St Paul’s Apothecary line. ABOVE Pressed up against the plaster and slate-tiled wall, the classic enamel tub was given custom-sealed iron feet.

Fortunately, Franca shares his sentiments, so when she moved in two years ago, she immediately respected the apartment’s original features. Today, her influence on the home is unmistakable, in pieces such as the gorgeous unglazed vases and mugs she’s spent the past year developing and refining, and the books and art arranged in piles throughout the otherwise sparsely furnished rooms.
“Our common goal of creating different and interesting spaces is the same as when people use colours and distinctive furniture, but our tools for accomplishing that are different,” says Niels. “Our décor can probably be best defined as subtle and understated, yet I think we’ve also managed to find something that can provide a new experience of what a room can be.” 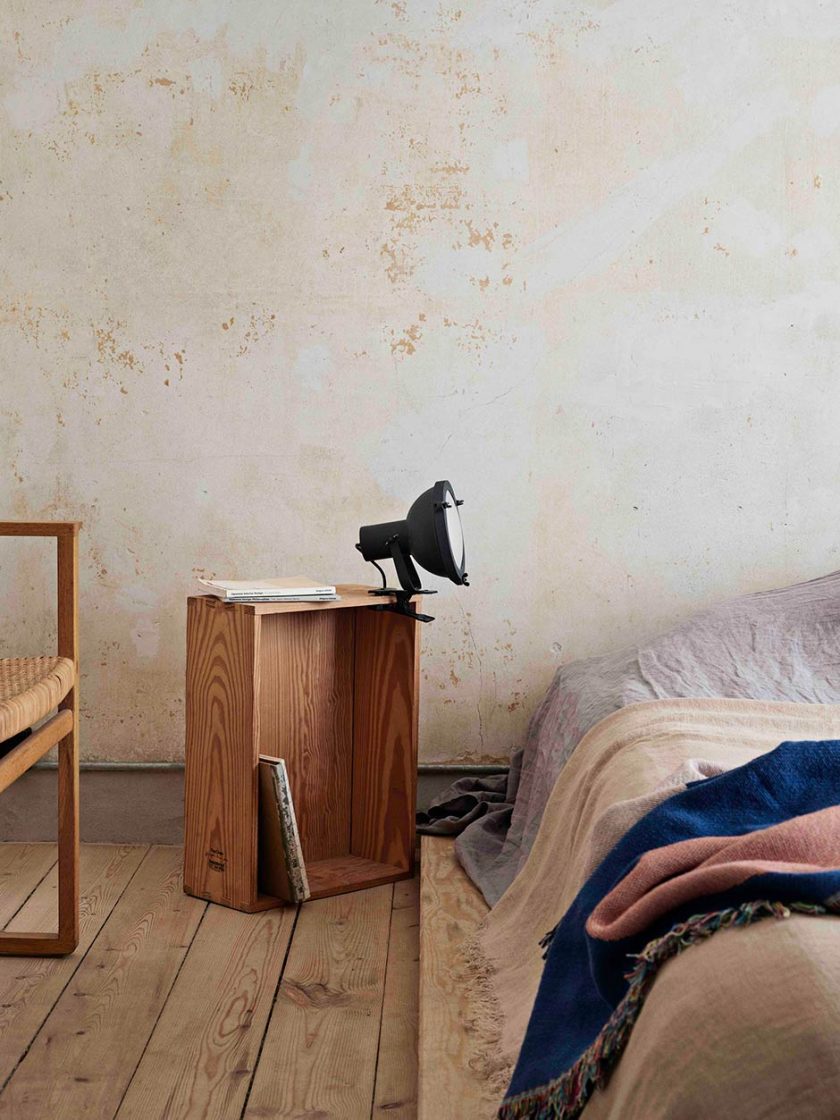 ABOVE A throw from Slowdown Studio adds some unexpected colour to the bedroom’s soft, harmonious hues of beige, brown and grey. Inspired by theatre spotlights, the Projecteur 365 lamp was designed by Le Corbusier in 1954 and today is produced by Nemo Lighting. Here, it serves as a reading light, clamped onto a Crate bookcase by Jasper Morrison for Established & Sons.

Another passion the couple shares is Franca’s craft, which she works with daily (producing a range of commissioned works and a soon-to-be-released solo series, Edition 00) and Niels encounters through Frama. Unsurprisingly, it’s particularly unique objects made by experienced craftsmen that carry value for them.
“There’s something beautiful in rare and fragile objects — like when you find a handmade spoon of which there’s only one, or a vase that’s fine and delicate,” says Niels. “You often take better care of it and appreciate it more. Something changes in our behaviour in a positive way when we become aware of what we surround ourselves with, and we stop moving around like clumsy elephants.”
The world is becoming more aware, he says, “and when you become aware of what you have, you take better care of your home and your neighbourhood, and care more about what you eat. Caring changes the way you relate to the things around you — not just the place you live, but also the rest of your world.”