From the ground up 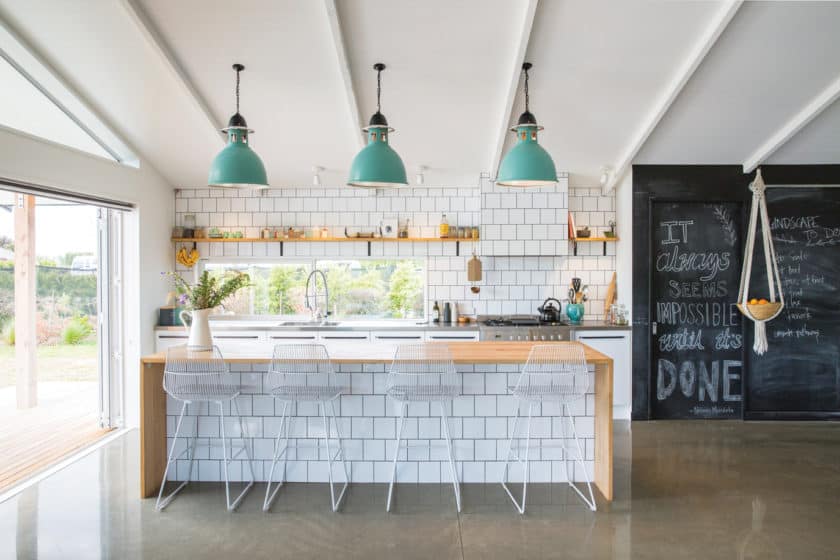 These Cantabrians have nailed building on a budget; creating their home from scratch – and all on the weekends.

Guy and Katrina Nurse aren’t professionals in the building trade, nor are they winners of a reality TV home renovation show – but they can give both parties a run for their money.

Five years ago the couple had been living in their first home in Lyttelton for just six months when the big Christchurch earthquake hit. While they loved their cottage, it was time to find a new place to live – and a new location while they were at it. 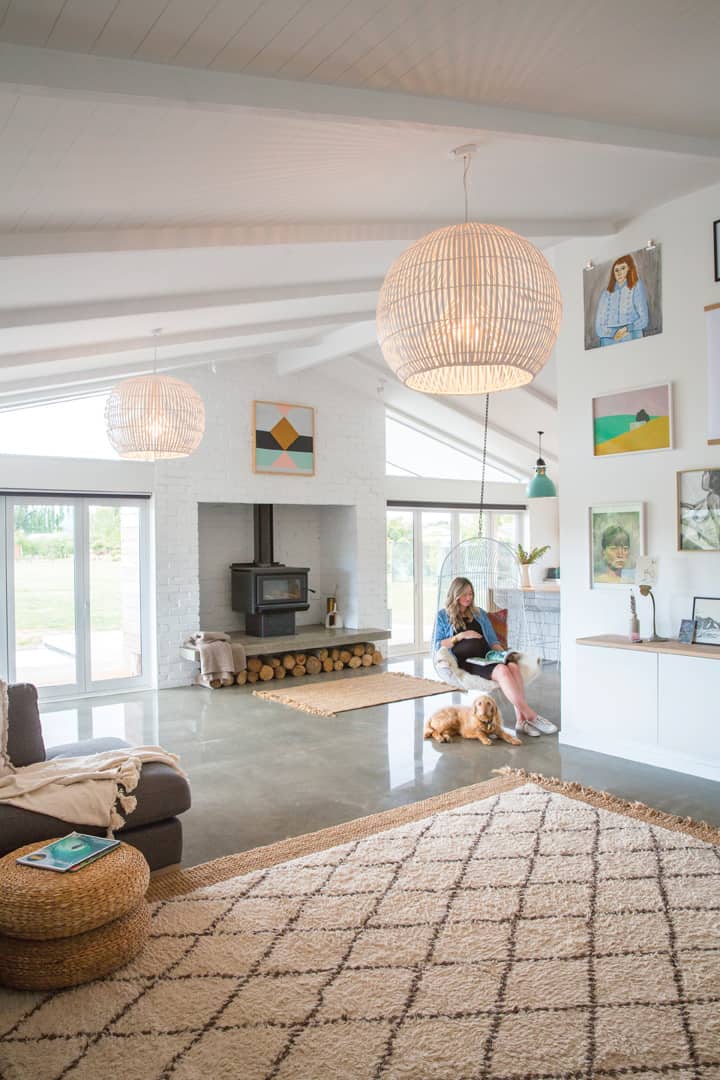 Their list of prerequisites read thus: somewhere out of town, close to the coast, with a sense of space but at an easily manageable size. When Katrina’s dad Jim sent them a link to a 2.5-acre piece of land a short drive north of Christchurch in Waikuku, those boxes all got their ticks.

After buying the land in September 2012, they embarked on designing their self-built home with the help of Google’s Sketch-Up. Two months later they took these 3-D sketches to Brent Watkins and Olivia Aitken of Watkins Consultants and Design and Consents North Canterbury, to help them get consent-ready for the council. “They were so fantastic, totally grasping what we were trying to achieve,” says Katrina. “Their advice made the whole consent process a total dream.” 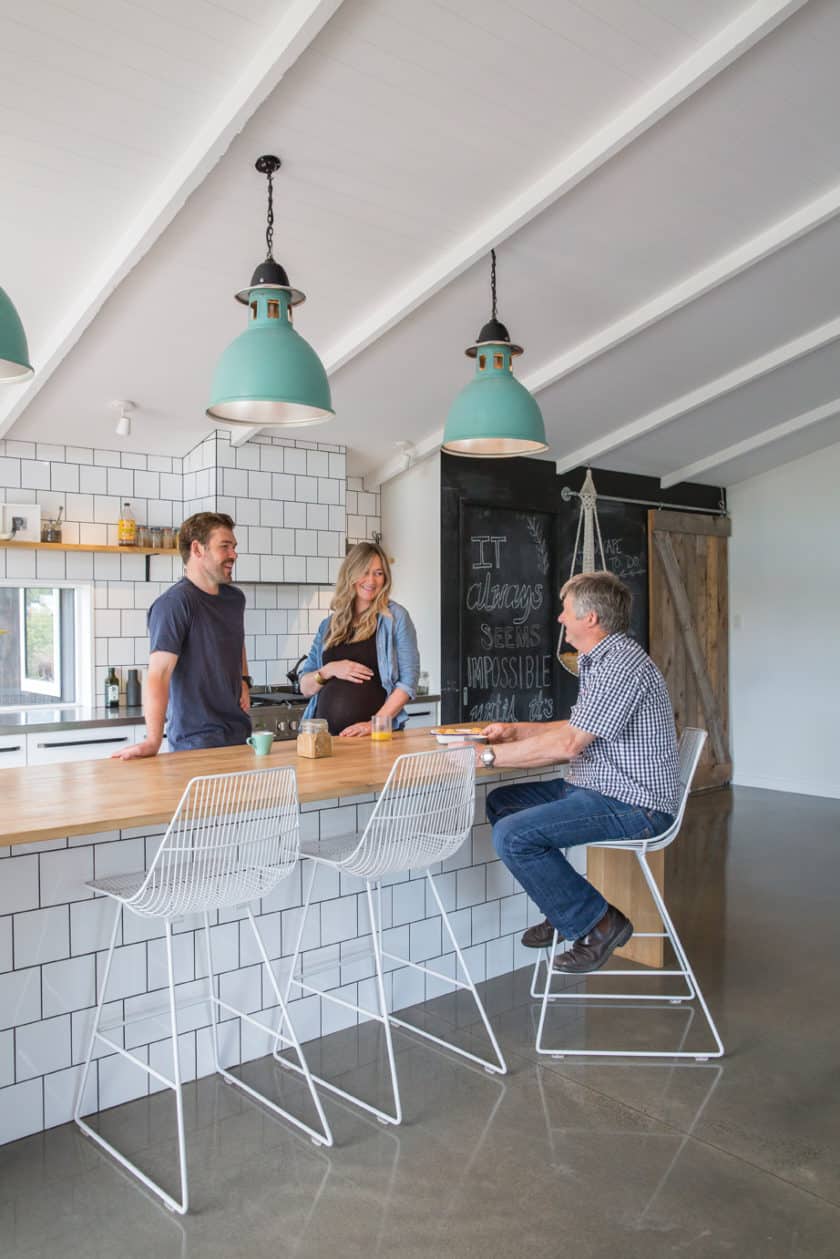 And so it began. Guy recalls: “Over that incredibly hot summer we lived in a tent while we built the four-bay workshop to house all the tools while we completed the house. Using borrowed diggers from a local farmer, we made the first cut in the ground for foundation work in April 2013, then after toiling away through a wet and challenging early winter, we poured the slab late in May.”

“We worked hard to limit expenditure, choosing alternatives when money couldn’t stretch. We often found that those compromises gave us a result that we’re even more proud of – it got us thinking outside the box.”

The ‘we’ he speaks of was their chain gang of three: Guy, Katrina and Katrina’s dad Jim. Working with a limited budget, they knew from the outset that they would be relying on Jim’s building knowledge and skill set to get it done. “One of our main goals was to aim for a mortgage on completion of the build that was around the same as our 80m2 cottage in Lyttelton,” says Katrina. “With a 255m2 footprint plan most would say we were crazy – and they’d be right! But with around 95 percent of the labour done by Dad and ourselves, and the remaining five percent done by friends and family, we made it happen.” 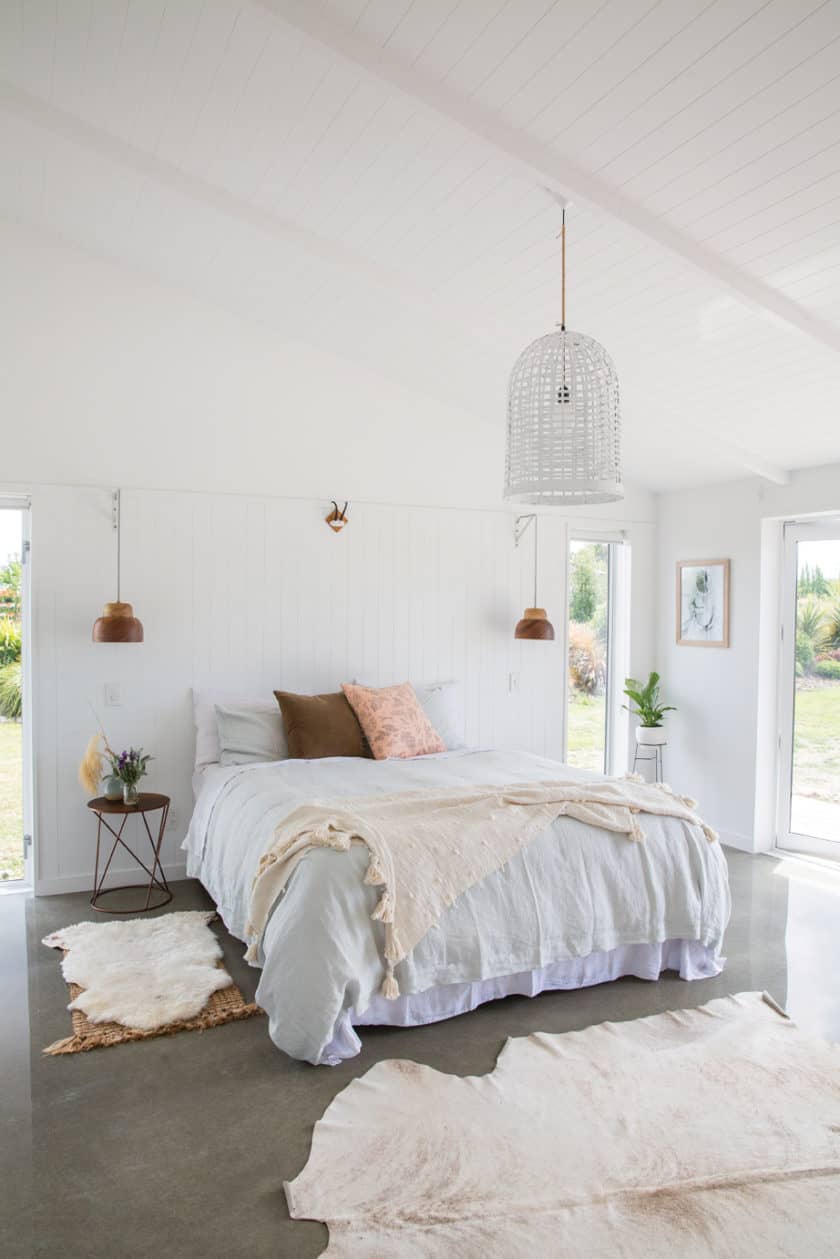 During the week the three of them continued with their 9-5 jobs, but come Friday night, they were back in boots and Stubbies to crack on with the build. If you follow Katrina on Instagram, or her blog, Love and Ginger, you’ll appreciate the trio’s hard work, creativity and determination not to be inhibited by a tight budget. “We worked hard to limit expenditure, choosing alternatives when money couldn’t stretch,” says Guy. “And we often found that those compromises gave us a result that we’re even more proud of – it got us thinking outside the box.” 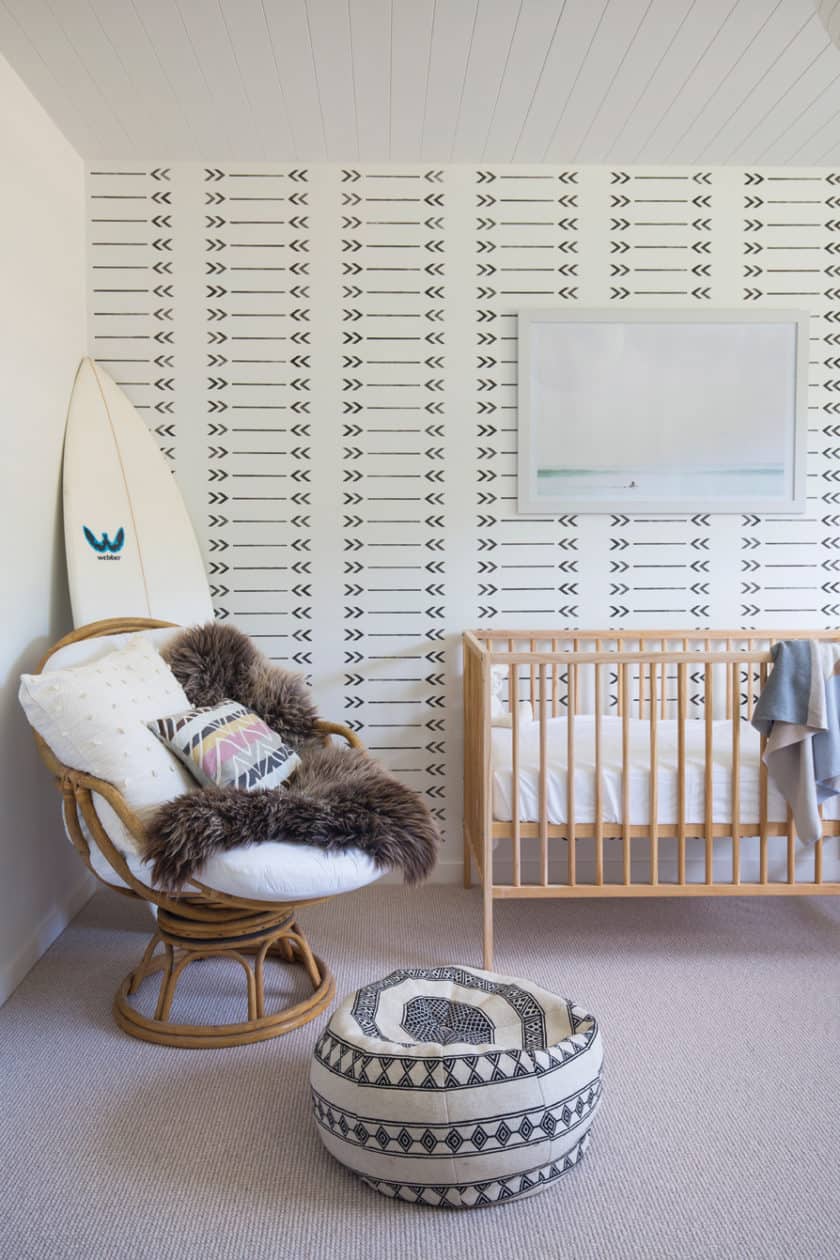 With the part-time nature of the project, the couple had to move into their new home before it was finished. However, it wasn’t long before Katrina was stamping her personality on the place with a relaxed yet refined approach to the interior. While the walls are all now white, mixed materials such as painted brick, tiles and wood panelling provide a textural backdrop which she has deftly decorated with an edit of vintage finds and clever purchases. 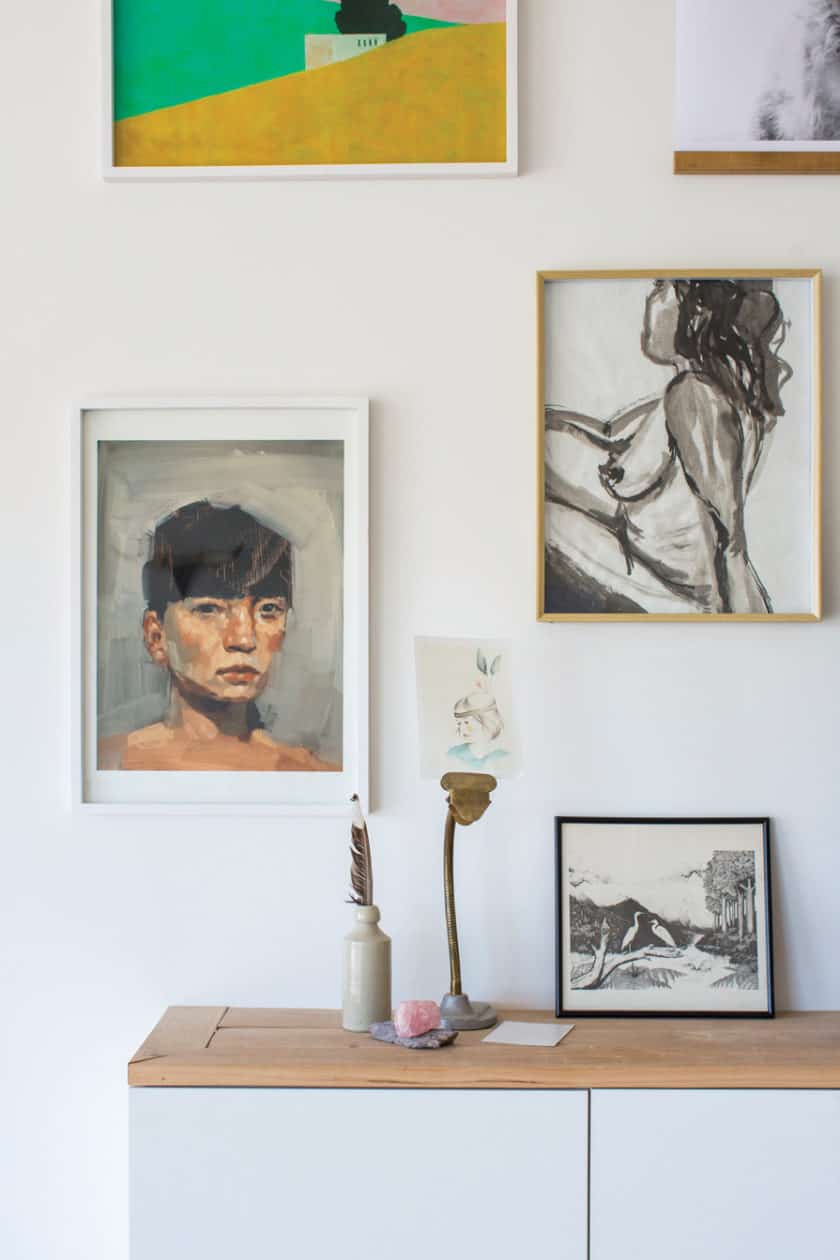 Various tasks are still being added to the To Do list, but something suggests this is just the way this determined couple like it. “The build confirmed to us that as long as you aren’t afraid of some serious hard yards, no holidays for a few years and learning to eat a lot of soup in the winter, you can achieve a hell of a lot with a limited budget,” laughs Guy.

The result is what you could call winning at real life. Though if Katrina and Guy were to ever enter one of those reality TV home renovation shows, we’d bet on them to take that out too. 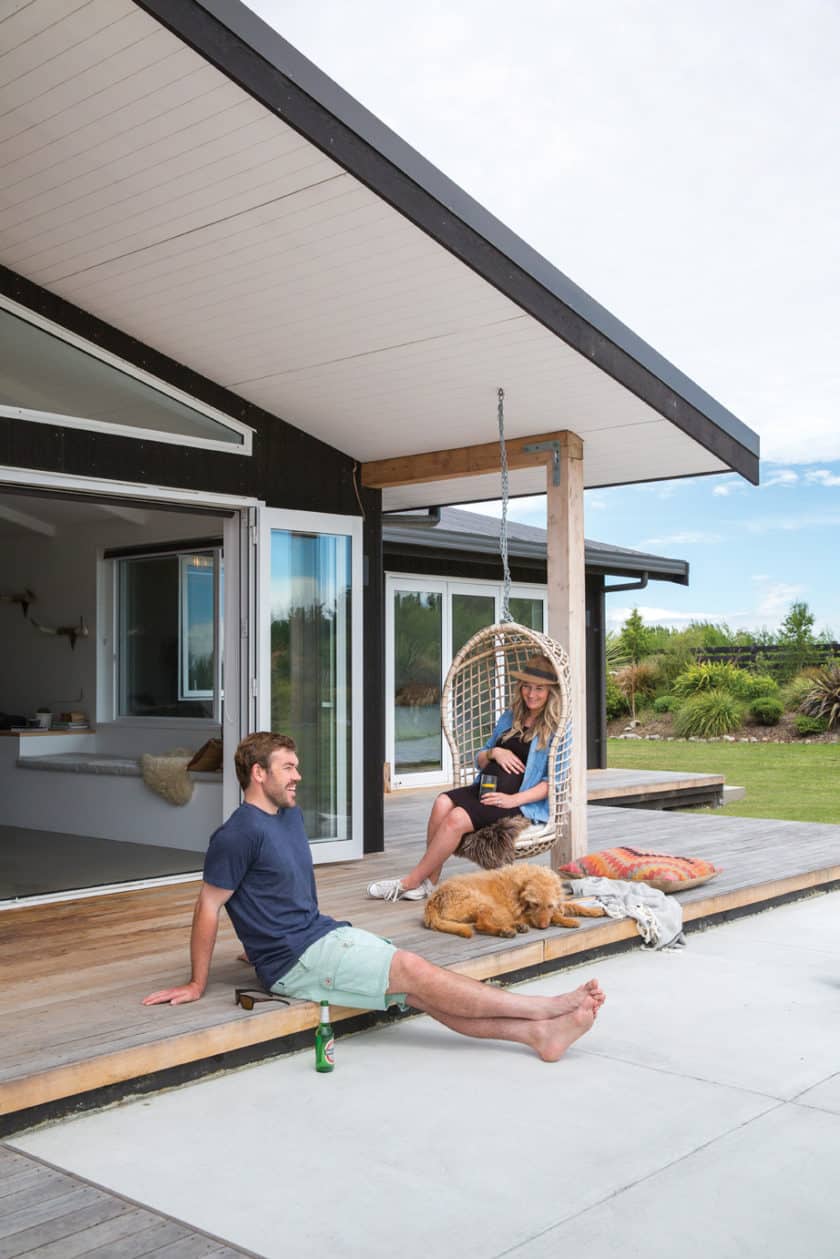