Heart of the home 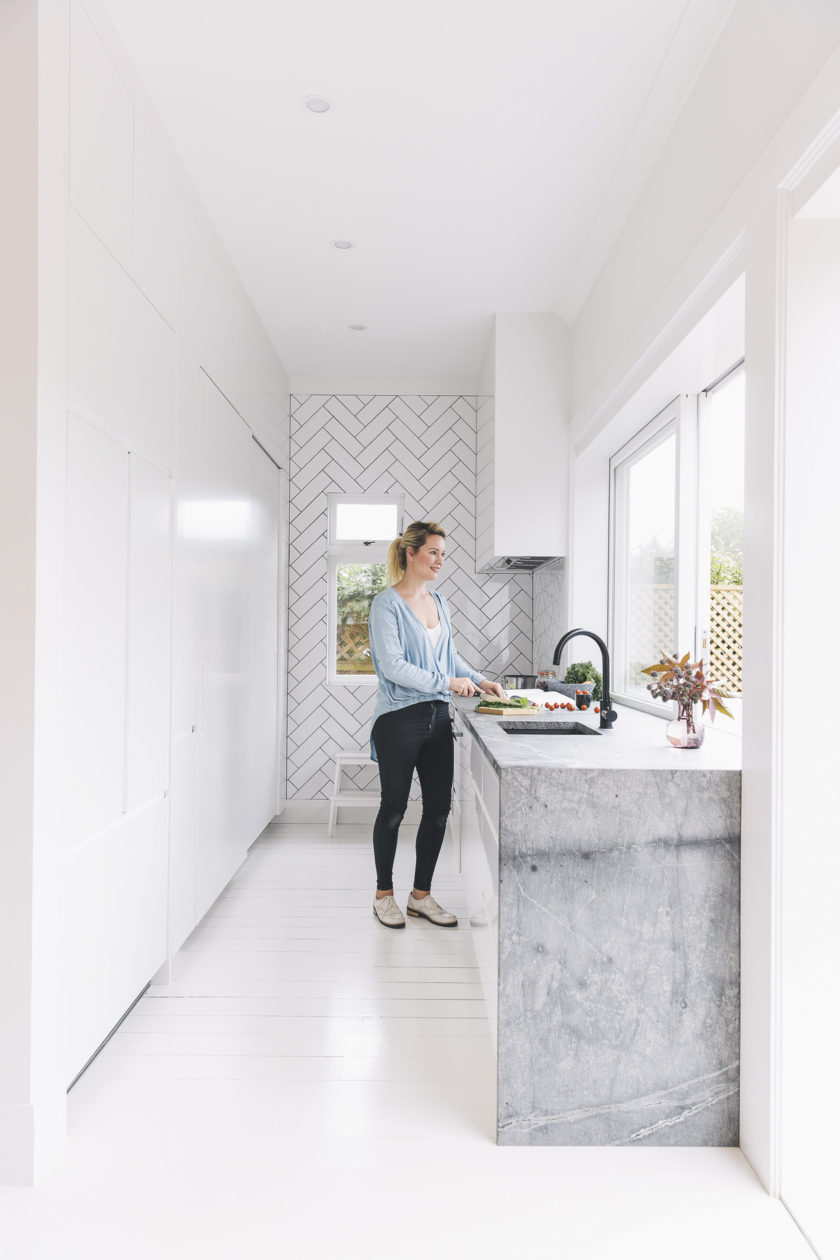 When you’re a dedicated foodie like Gretchen Lowe, your renovation is always going to centre around the kitchen.

Gretchen Lowe has long had a love of cooking; skills sharpened from years of working as a food stylist, recipe developer and on her own blog, My Weekend Table. It made sense then, that when she and her then fiancé Blair Houston were searching for a house to buy in Auckland early last year, a beautiful and functional kitchen was high on their priority list. 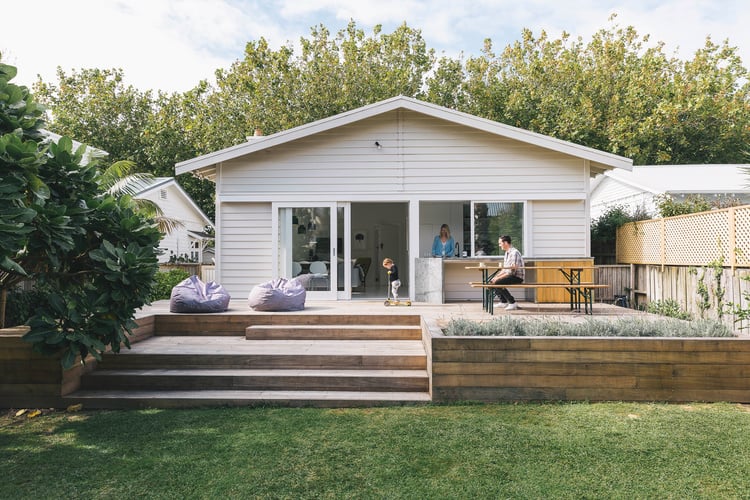 Then they fell in love with a Grey Lynn bungalow. Although charming, the 1930s structure was in need of a lot of work – including a complete overhaul of its very poky kitchen. Luckily this kitchen was positioned in the best area of the house; the back end which attracts all-day sun. Opening it up to make it their main living space was an easy decision.

“When it came to choosing materials, we knew we wanted clean lines and a refined design, so decided we would be better off doing it once and doing it right with high-quality materials”

The couple could have used the plans they inherited from the home’s last owners for a large extension, but, wanting to minimise costs and keep their backyard as large as possible for their two-year-old daughter Gwyneth, they instead decided to draft their own plans within the existing footprint. 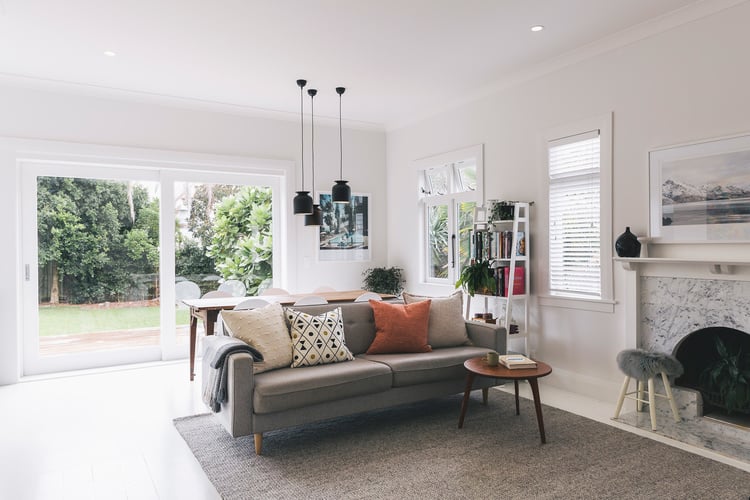 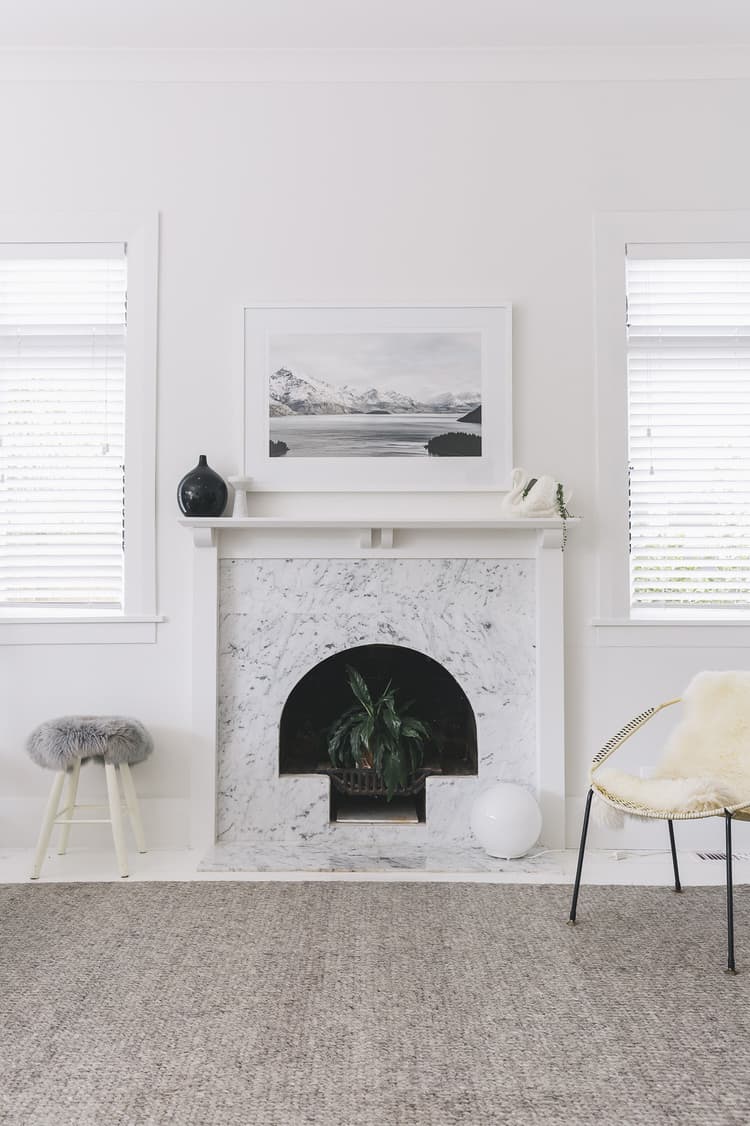 Enlisting the help of Lloyd Hartley Architects a few short months after their March 2015 move-in date, the project was well underway by September. Well, it had to be: they were living in the front half of the house and planning to get married in the backyard two months later. “But we soon changed our minds about having the wedding at home once the renovation got further down the track,” Gretchen says. “Although we did have a barbecue the next day with a half-finished kitchen and only the laundry sink in action! Luckily I have a very handy friend who whipped up a makeshift plywood benchtop for us.” 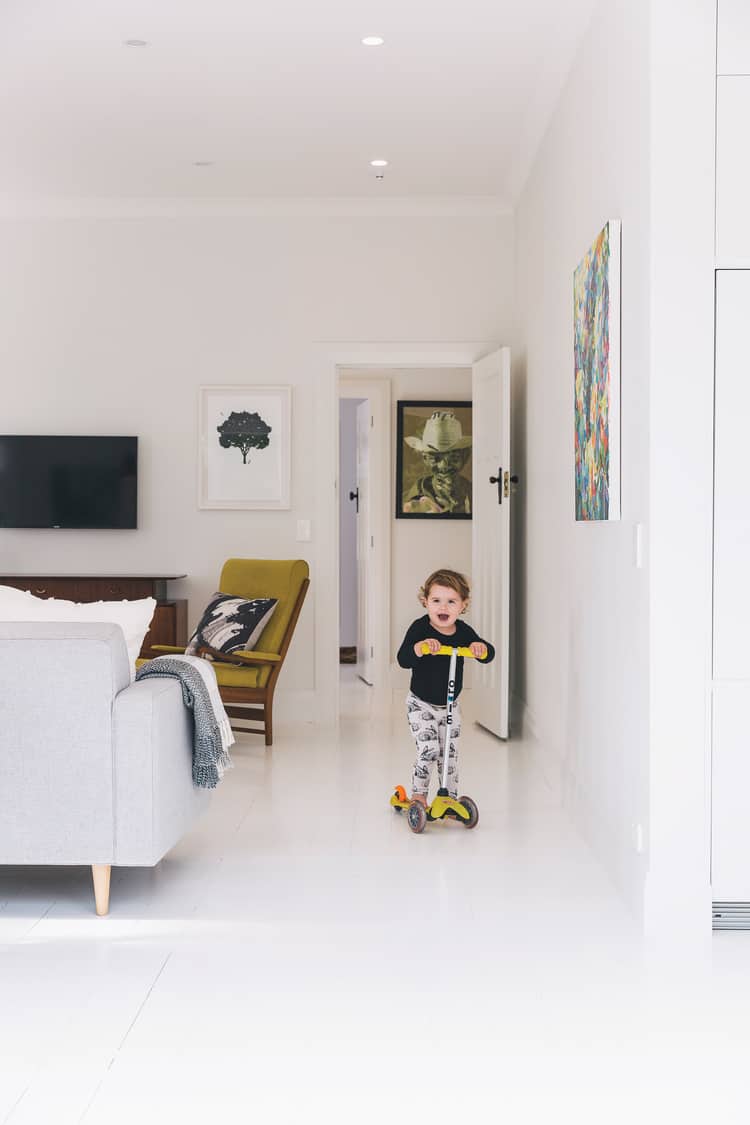 Although the previous owners had already begun the renovation, they had only gotten as far as laying the foundation work and doing up the bathrooms. Still, Gretchen and Blair initially thought they could just do a quick update to tide them over for the next five years – but that idea soon went by the wayside too. “When it came to choosing fixtures and fittings, we knew we wanted clean lines and a refined design, so we decided we’d be better off doing it once and doing it right with high-quality materials,” Gretchen says. 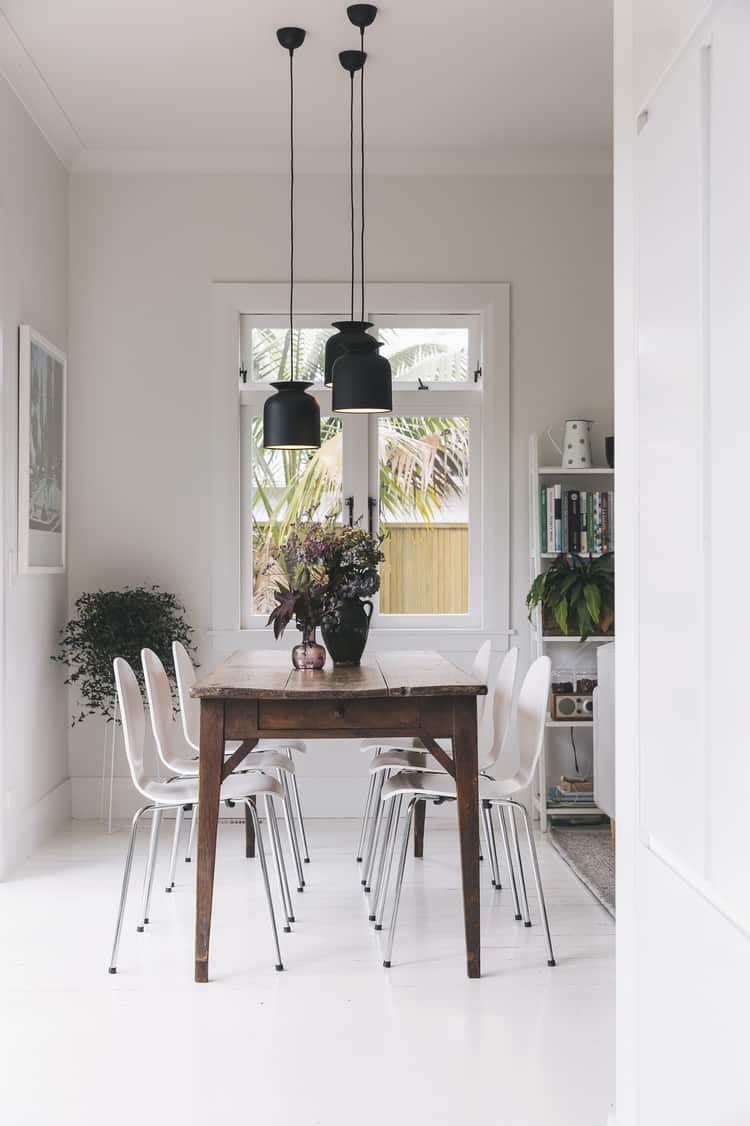 Today, from the street, the house looks much the same as it did when they bought it – but the classic bungalow exterior belies the light and bright atmosphere that now greets you when you walk in. Doing away with the original rabbit warren of rooms, Gretchen and Blair found the highest point in the roof to level out the ceiling, creating an open-plan living space with a galley kitchen and dining area opening out onto a large deck in the backyard. 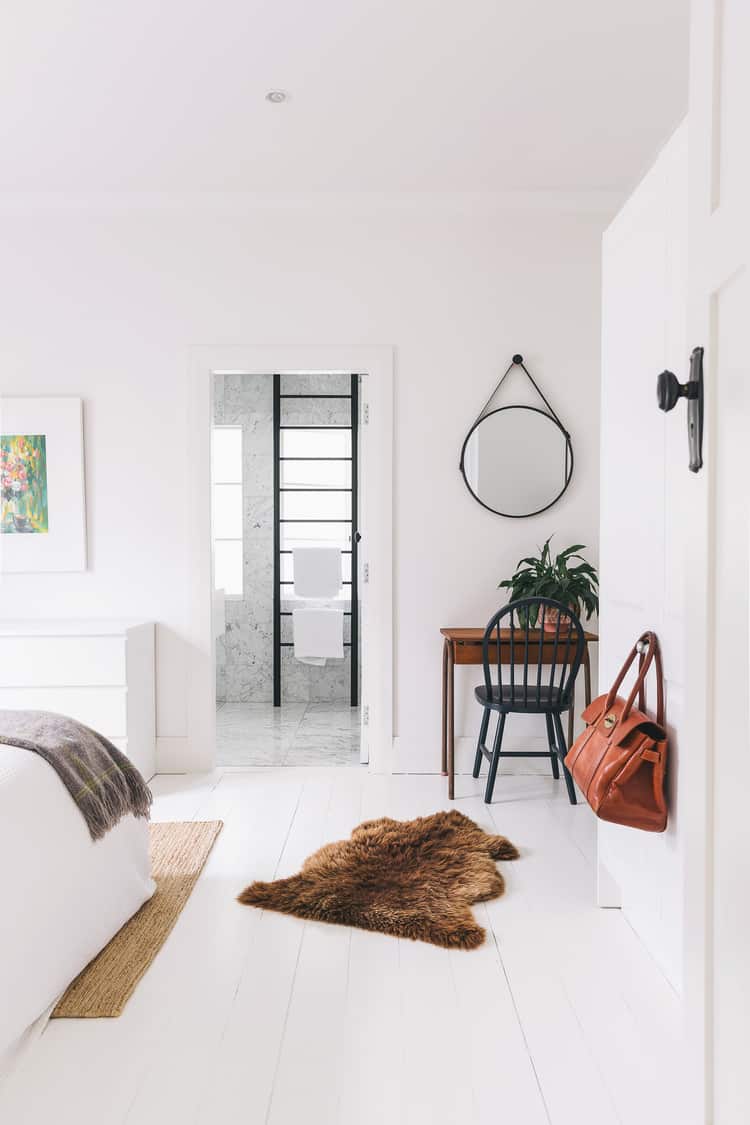 But it is that galley kitchen that is the star of the show – just as they always planned it would be. This space isn’t just a place to cook meals for their family and friends, but also the centrepoint of Gretchen’s creative foodie pursuits, which she often photographs here as well. Floor-to-ceiling herringbone tiles create a feature at the end of the kitchen, while a sleek wall of white cabinetry hides a double-door fridge, additional bench space and storage for styling props – as well as a laundry sink, washer and dryer.

And Gretchen loves it. “Even though I’m a foodie I’ve never had a brand new kitchen,” she says. “It’s just such a treat. I pinch myself every time I’m cooking in here.” 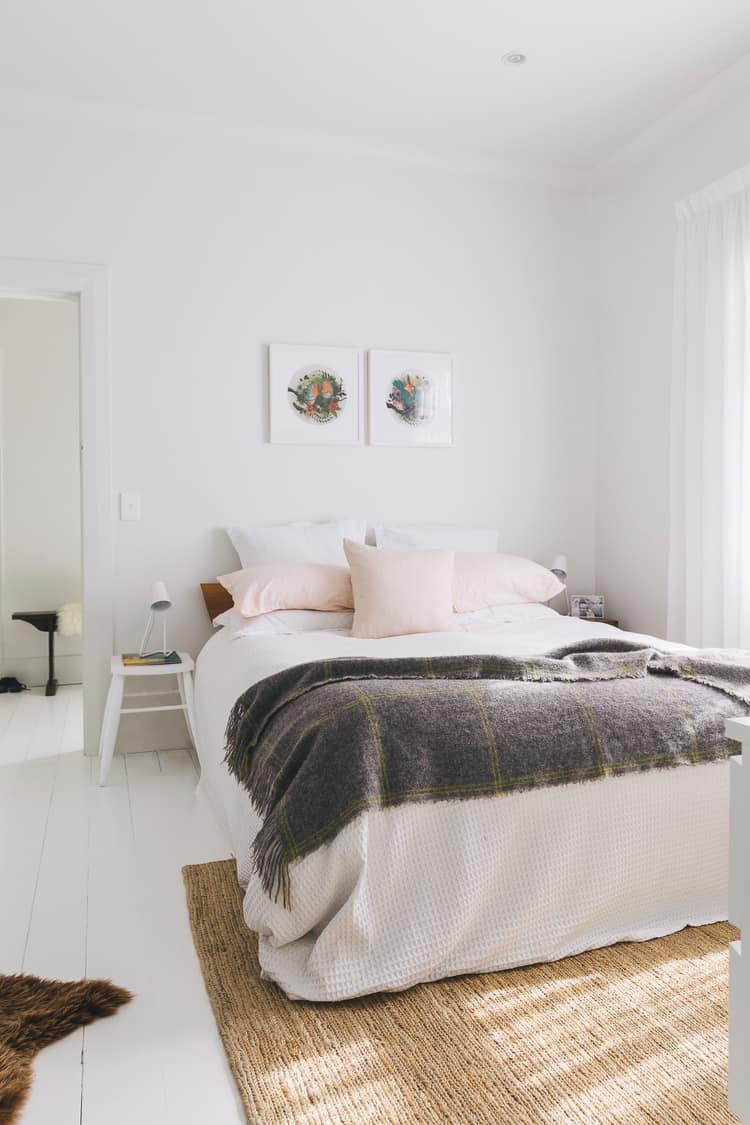 The thing she pinches herself over the most is the statement granite bench. Much more of a solid fixture than that plywood number was, it does double duty extending as a bar for evening drinks on the deck. But there is one drawback: “It gets so hot that I once tried to fry an egg on it!” Gretchen jokes. “So we’re investigating awning options for outside the kitchen windows for next summer.” 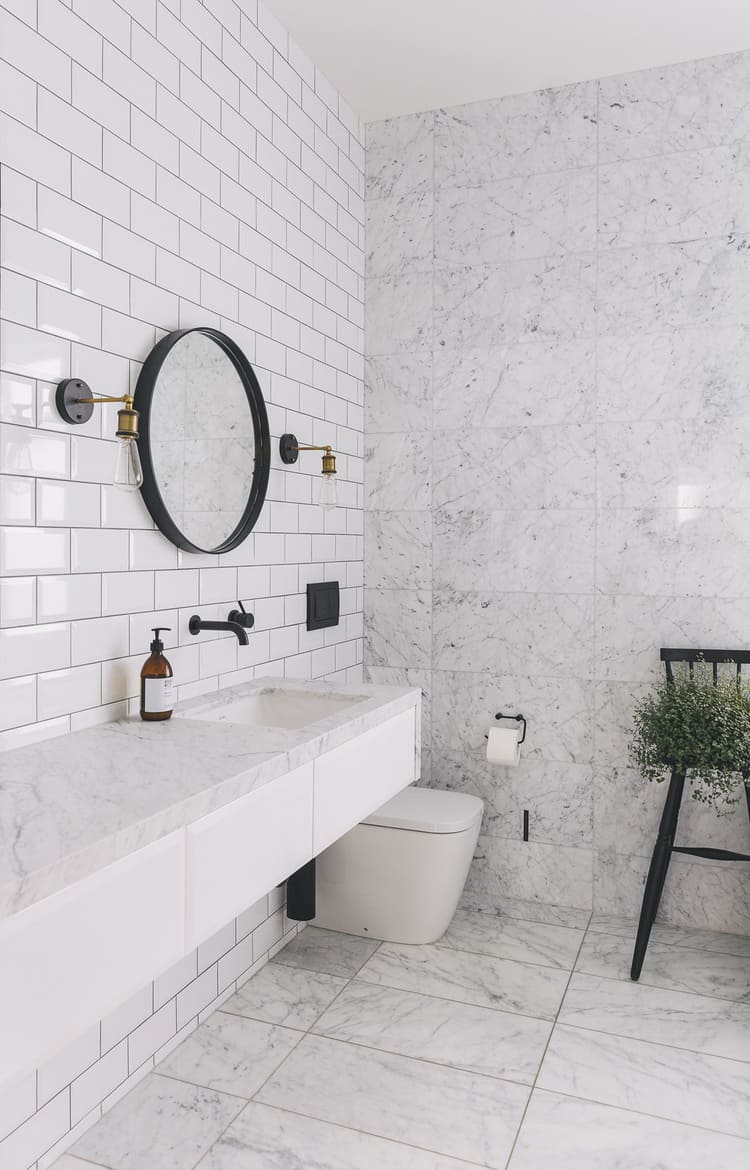 This house has a lot of options in the warmer months. “The deck has been an amazing addition for entertaining,” Gretchen says. “The architect suggested the sunken area, which at first we weren’t sure about, but he sold us by saying it would provide extra seating and the potential to add a fire pit. He was right – we use it all the time.” 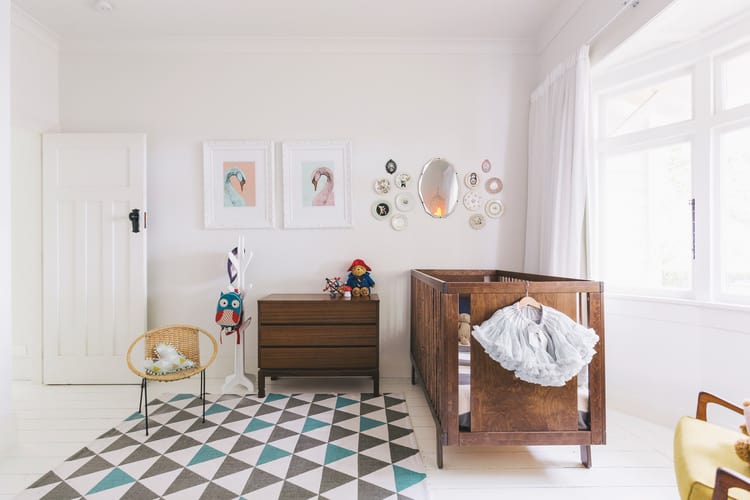 “Winter at home is dimmed lighting, candles, the smell of slow-cooked lamb wafting through a warm house and plenty of South American red wine”

Which isn’t to say that this isn’t a great house in winter too. With the sun shining in well into the evening, plus gas heating flued into every room, the whole house is warm all year round. “Winter at home is dimmed lighting, candles, the smell of slow-cooked lamb wafting through a warm house and plenty of South American red wine,” Gretchen says.

With their handy central Auckland location you’d think that this little family would eat out a lot. But with Gretchen’s cooking talent, Blair’s skills as an amateur sommelier, a mutual love of entertaining, and now the perfect house to do it all in, they see few reasons to leave home.