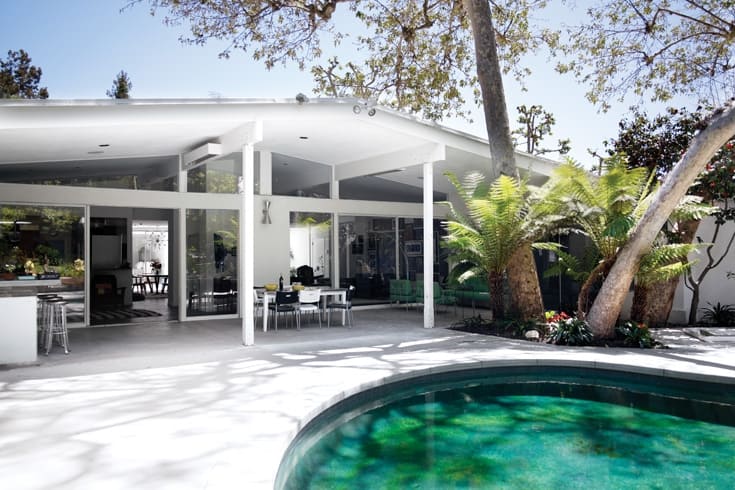 The excitement a creative couple felt at finding their dream home in LA was heightened when they found what was inside – and out the back.

When American photographer Don Flood and his model wife Jenny Brunt went house hunting in Los Angeles in 2009, they didn’t expect their search would end in the affluent community of Brentwood. But here it was, The One; an architecturally-designed home built in 1958, with a fabulous garden full of sculptures left by the previous owner to boot.

“We were living in New York, but often worked in LA, so we made the decision to relocate,” Don recalls. “We’d already seen hundreds of houses when the realtor showed us this one in Brentwood. He was convinced that we wouldn’t like it as it had ‘a rather unfortunate room’ as he called it.”

But the realtor was wrong. The room, as it turned out, was the previous owner’s atelier – and Don liked it very much. “I immediately became very excited and envisioned my own photo atelier there,” he says, “but I had to keep a straight face in front of the realtor.” Not for long though – just a few weeks later the family’s moving truck arrived from New York.

The house was built by an unknown architect in 1958, but it’s thought there is a good chance it was the renowned Quincy Jones, as he often built homes with a patio and very large open rooms in this area. “One of the great advantages of this house is its layout as the girls [Ella, 11 and Edie, 9] have their own area, we have ours, and so do any guests,” says Don.