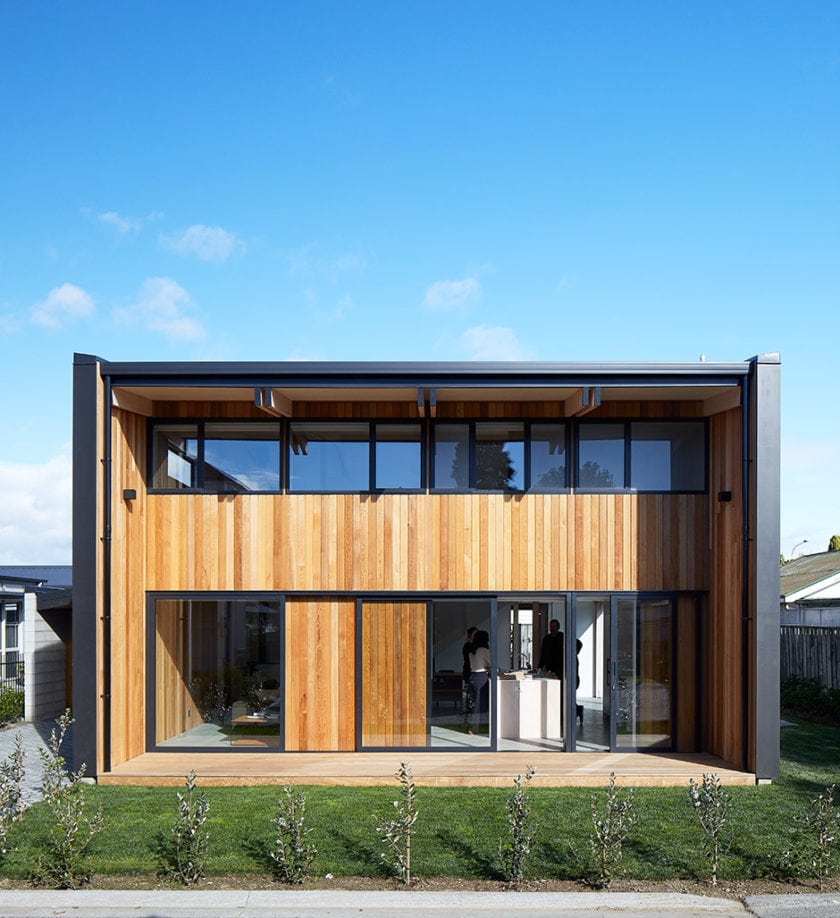 Innovative ideas, including joinery that really lets there be light, make this prefabricated prototype so appealing its designers moved on in.

Shifting to Hawke’s Bay wasn’t a planned sea change for John and Nikki McNamara, but in the process of building the first showhome for their prefab venture modhouse, they found the pace of life in Hastings and chance to live in a newly crafted home suited them to a T.
After nurturing their careers as architect and interior designer respectively for more than 20 years in Auckland, and with their children Ruby and Theo having flown the nest to universities in the South Island, the timing was right for the couple to make their next move. For John, that meant realising the ideas, sketches and models he’d been exploring and refining for the past decade to develop a sustainable, prefabricated small-home concept.
“We’d been looking for a location in which to build the first modhouse but the cost to do our first showhome in Auckland was going to be well over a million dollars, which was simply not viable,” he says. “With Nikki’s family living in Hawke’s Bay, we’d been coming down here for years, so we started casually looking around for land. When we found this site and the opportunity arose to purchase it and build for a fraction of the Auckland cost, we took a leap of faith.” 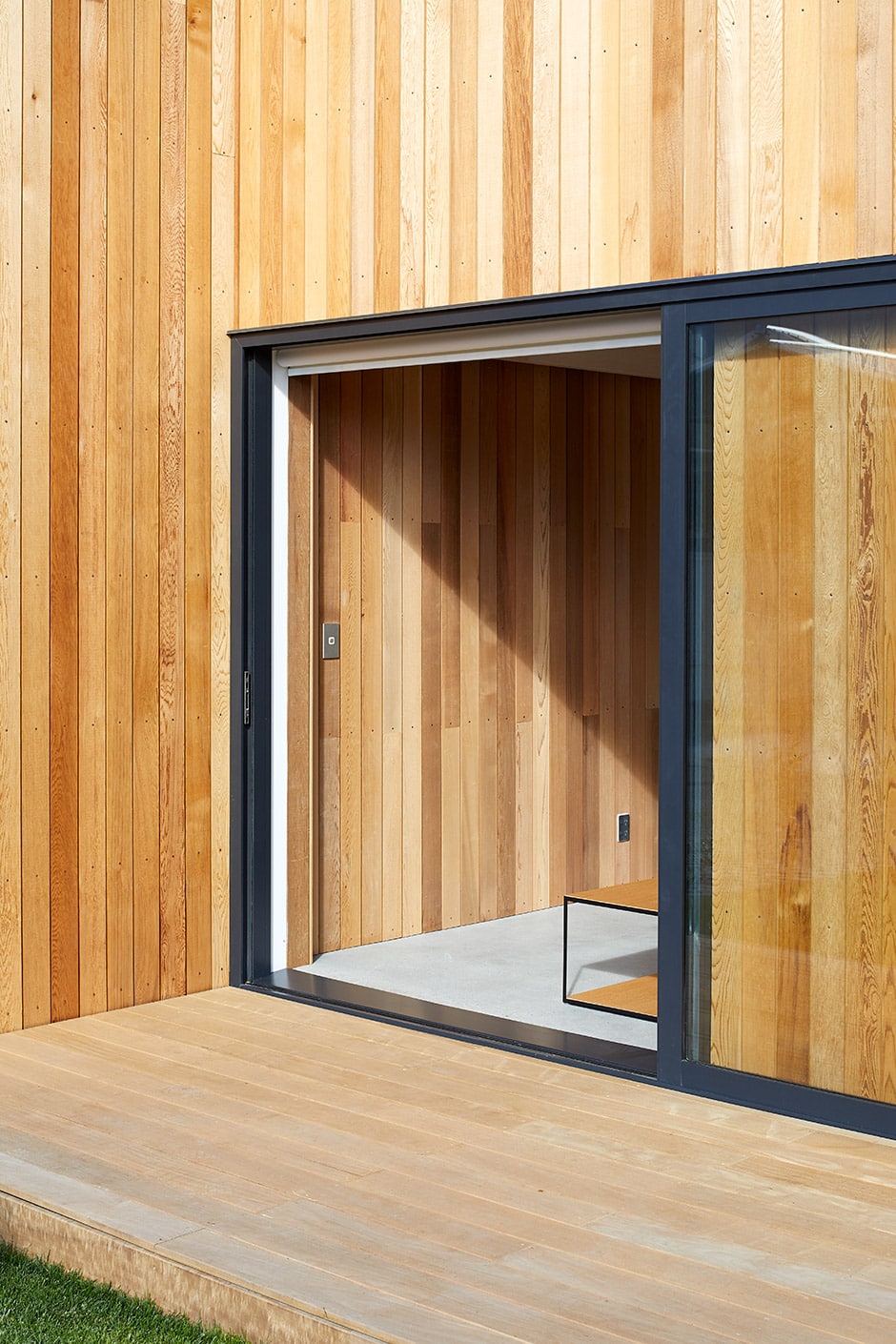 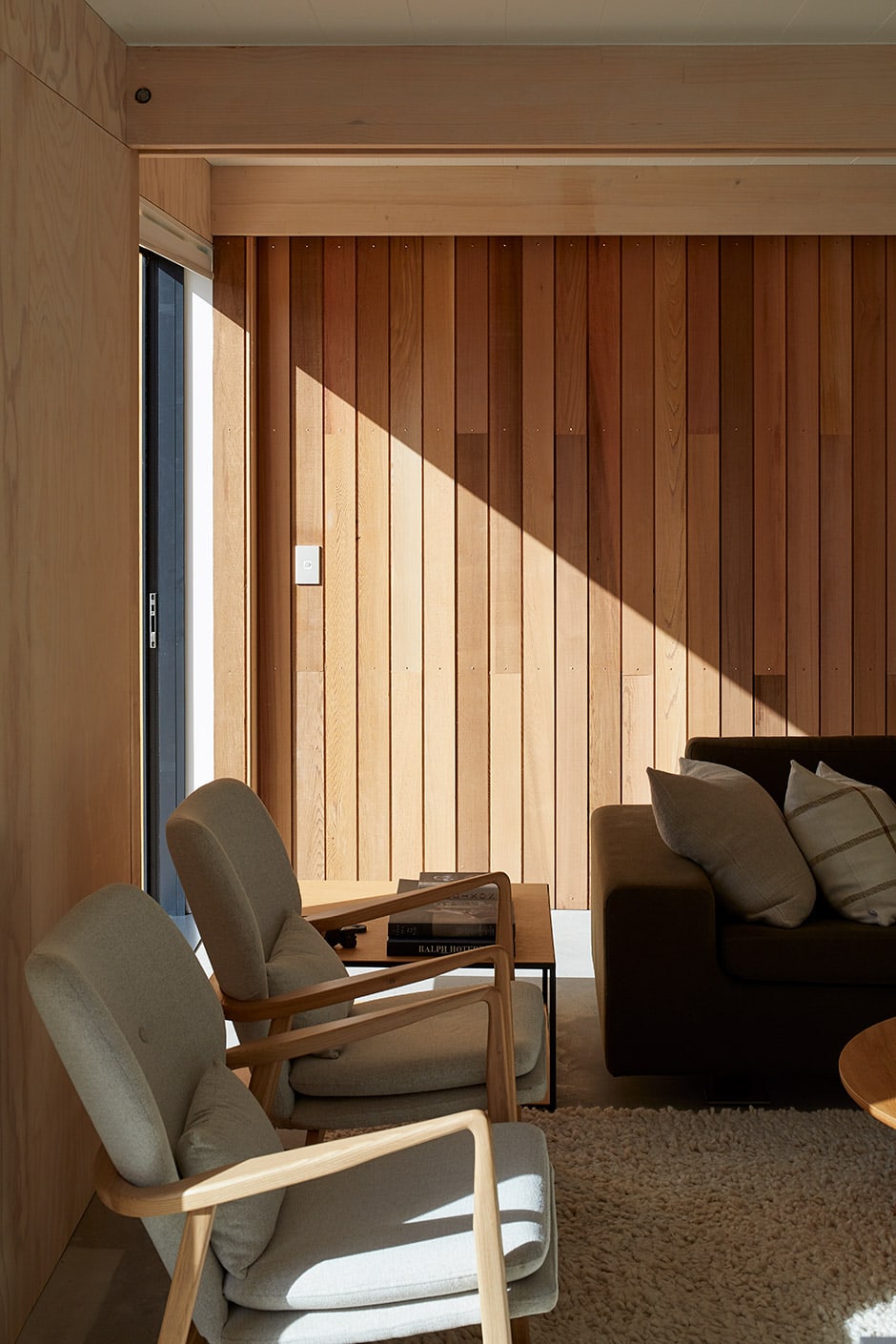 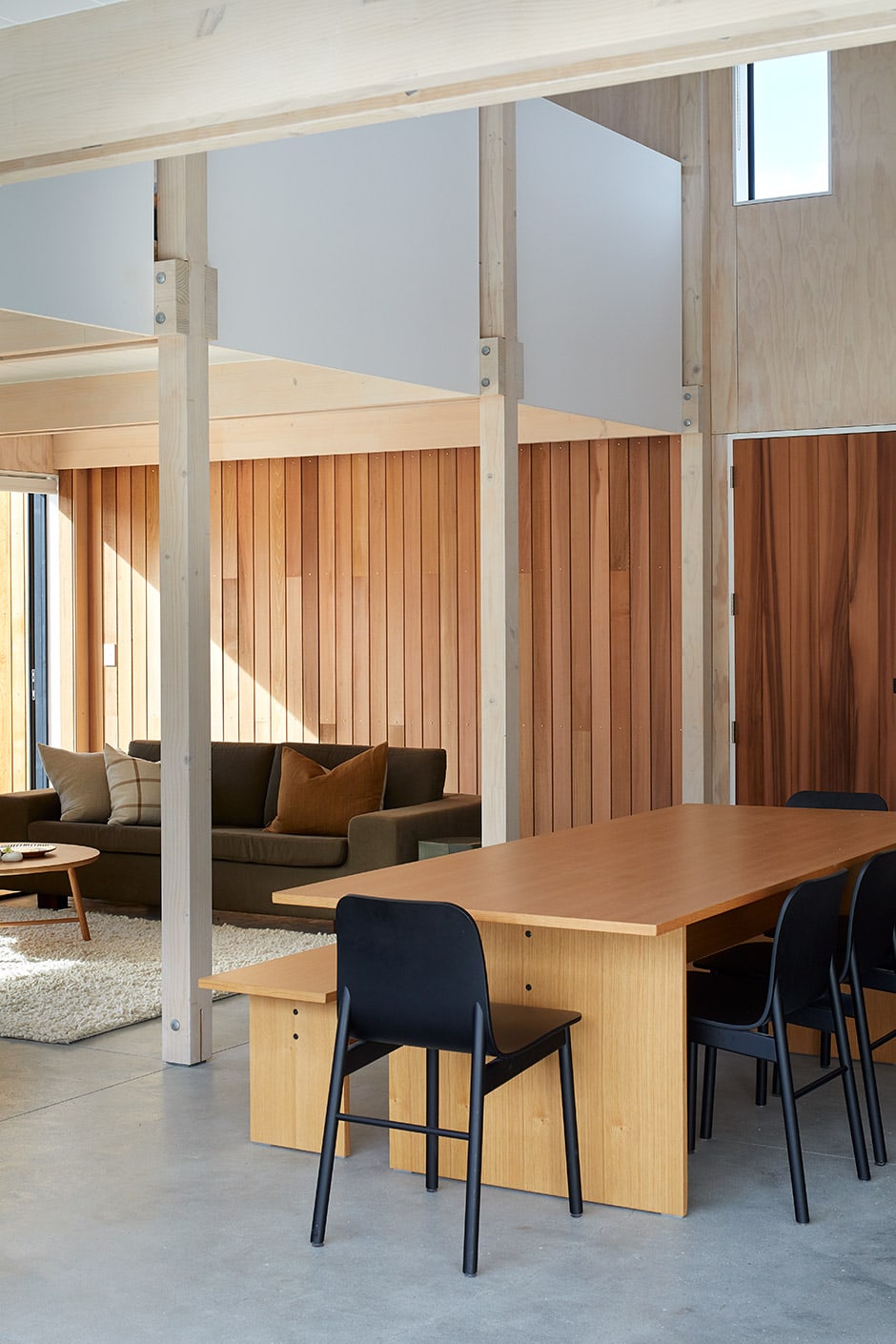 MAIN PHOTO The generous 2m over-the-wall sliding doors by First Windows & Doors were something John toyed with for months. “They’re one of the most important elements of the design,” he says. “The ability to break down the solidity and mass of the house and open the end walls to the outside is really effective.” ABOVE Cedar cladding offers visual warmth outside and in the living area, where a pair of oak Fable armchairs by Città sit with a sofa by David Shaw that Nikki had reupholstered to give it a new lease on life.

At only 341m2, what the property lacked in size it made up for in suitability, fitting the proportions of the planned modhouse perfectly and providing the ideal testing ground for John’s concept. Over the course of a year, he resolved site-specific considerations and prepared building consents with Auckland engineers Flux. Juggling their jobs in the city with flying to Hawke’s Bay to project-manage the build whenever they could, it wasn’t long before he and Nikki saw the merits of moving into the home themselves, the appeal of being closer to family cementing their decision. 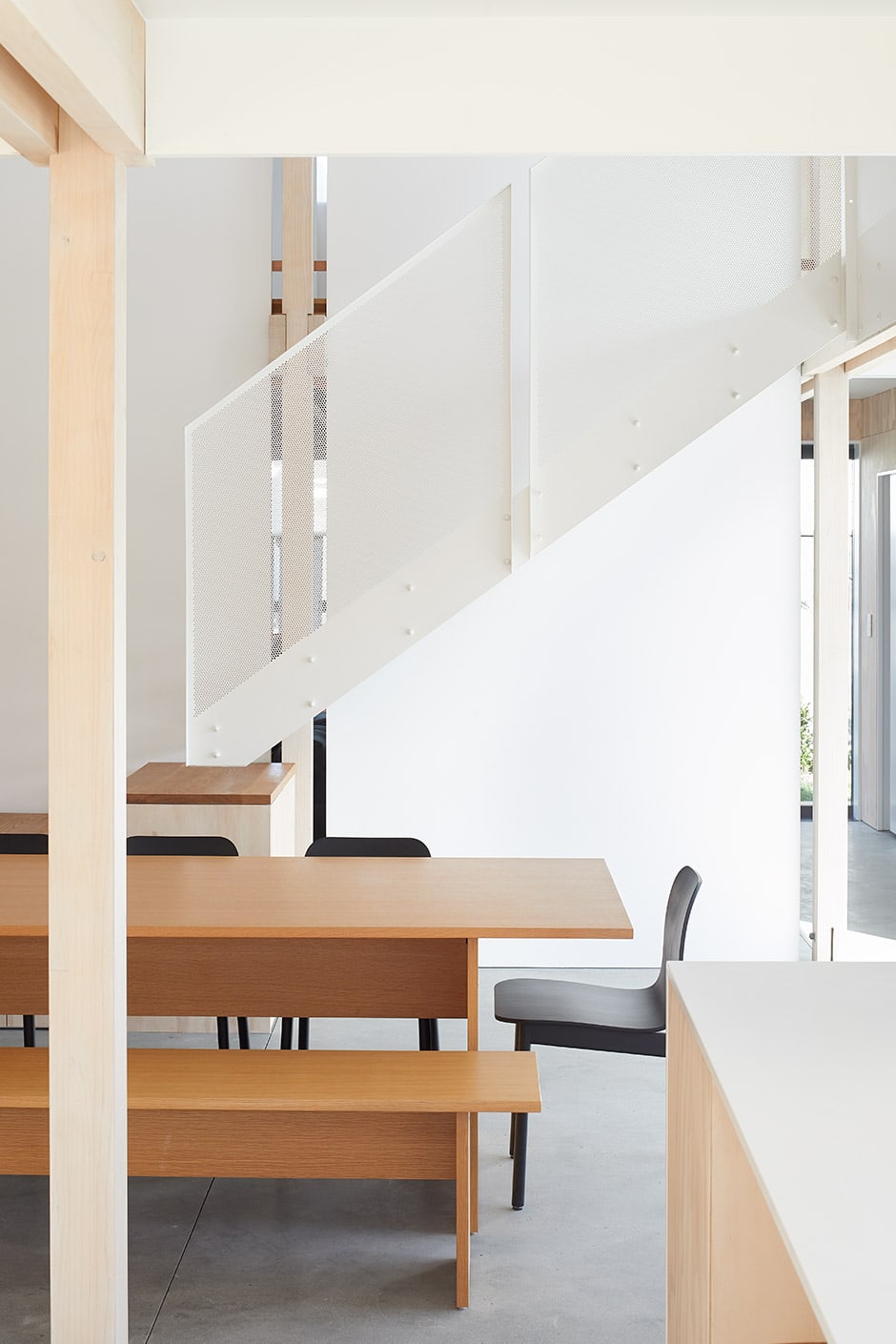 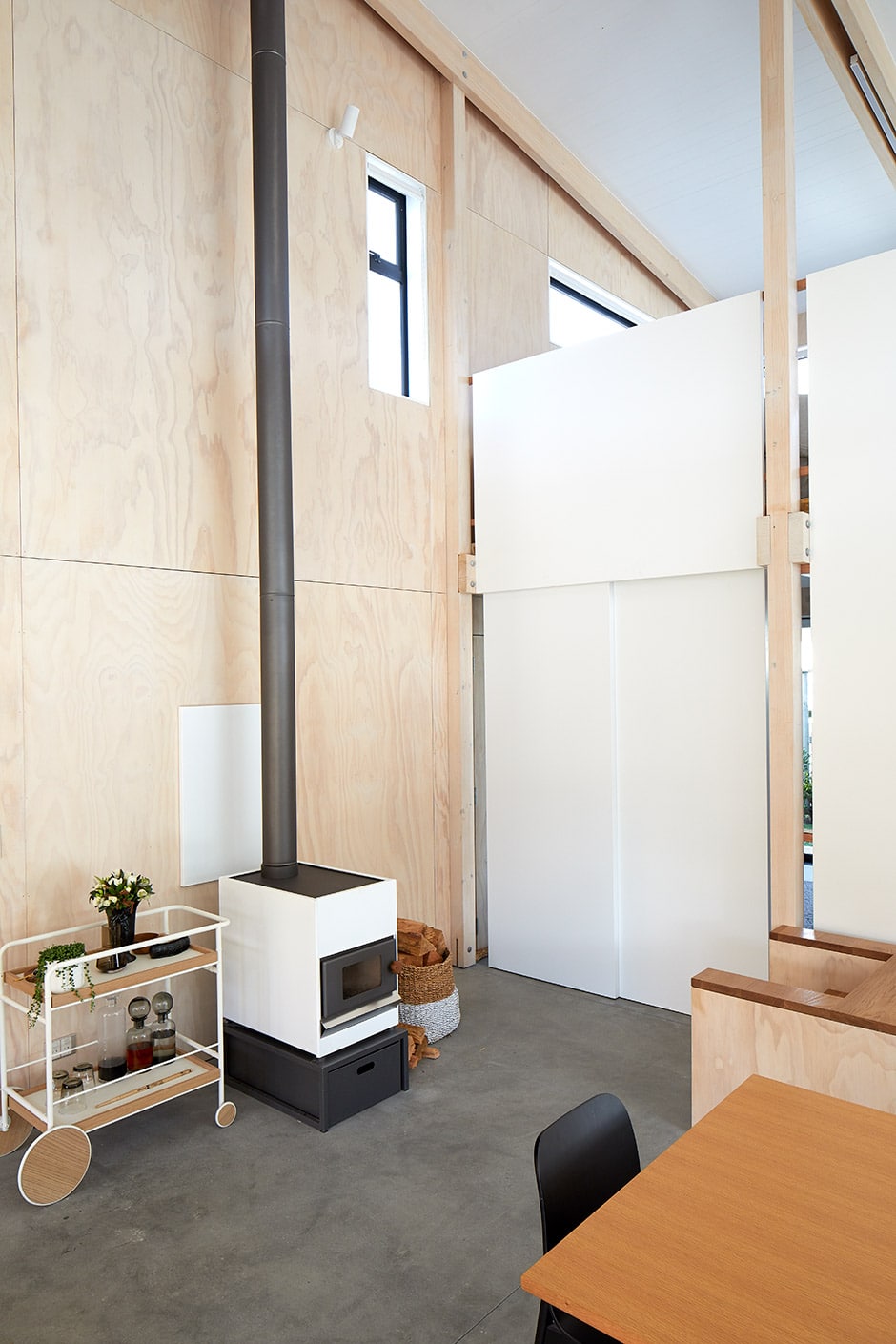 TOP Light streams down into the open-plan ground-floor dining, kitchen and living spaces through the upstairs windows from First Windows & Doors’ Metro Series. Throughout the house, these and other cleverly positioned openings provide essential cross ventilation. The family’s oak Plank dining table and Aspen chairs are from Città. ABOVE The house has solar panels and is heated with a Pyroclassic fireplace. Instead of solid walls, individual Triboard panels in Dulux Okarito separate the downstairs living areas, the negative detail between them increasing the architectural interest.

John has a keen interest in environmentally sustainable design, and modhouse’s simple open-plan layout reduces the number of materials needed while maximising the living space. The doubled-glazed windows and doors are another well considered feature that ensures a healthy, comfortable home.
“Hawke’s Bay gets cold in winter and very hot in summer, so we were aware that we needed to not only allow the correct amount of natural light into the house, but also include a lot of doors and windows for good cross ventilation,” says John. “I think the First Windows & Doors joinery we used has been one of the greatest successes. It might not be noticeable at first, but the ground-floor openings are all sliding doors, whereas upstairs all the openings are windows, most of which are hinged. Even in winter, we’ve at times opened up the whole face of the house on the north side — another of our favourite things.” 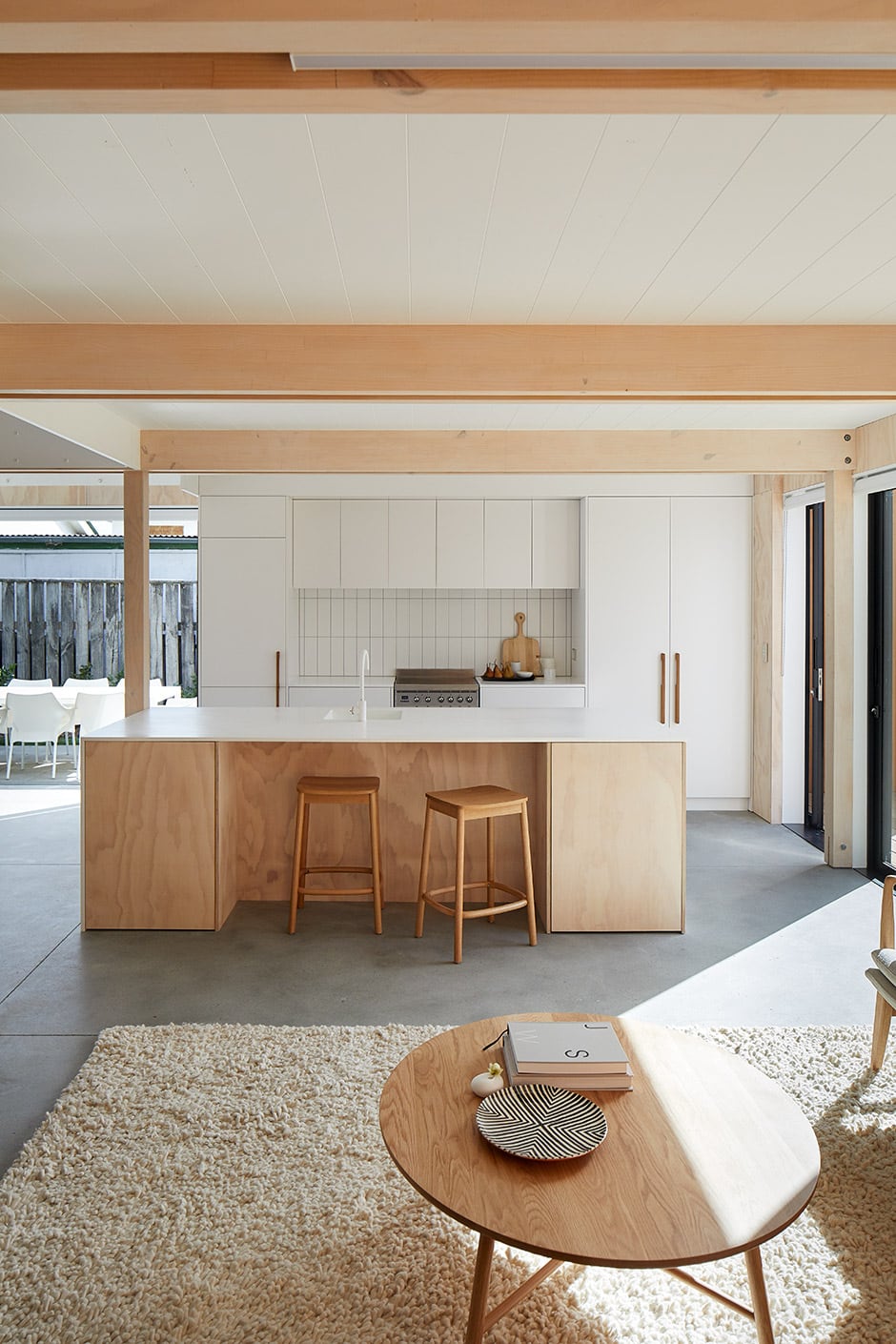 ABOVE In the kitchen, the minimal aesthetic is maintained by a pale Corian benchtop with a waterfall edge and integrated Corian sink, tonal tapware from Plumbline, and a fridge/freezer by Bosch from Kitchen Things hidden behind the cabinetry. The home’s laminated timber posts and beams by Techlam are whitewashed with Resene Colorwood in Rock Salt. Extra-large sliding doors with flush sills offer a seamless transition into the garden, where the couple has planted flowering feijoas to attract the birds and the bees.

With opportunities on all sides of the house to let the outside in, it feels nice and airy. Sun seeps inside throughout the day, creating striking shadows on the cedar feature wall in the living area and the perforated steel staircase leading to the first floor that surrounds the lower level in a ‘U’ shape. 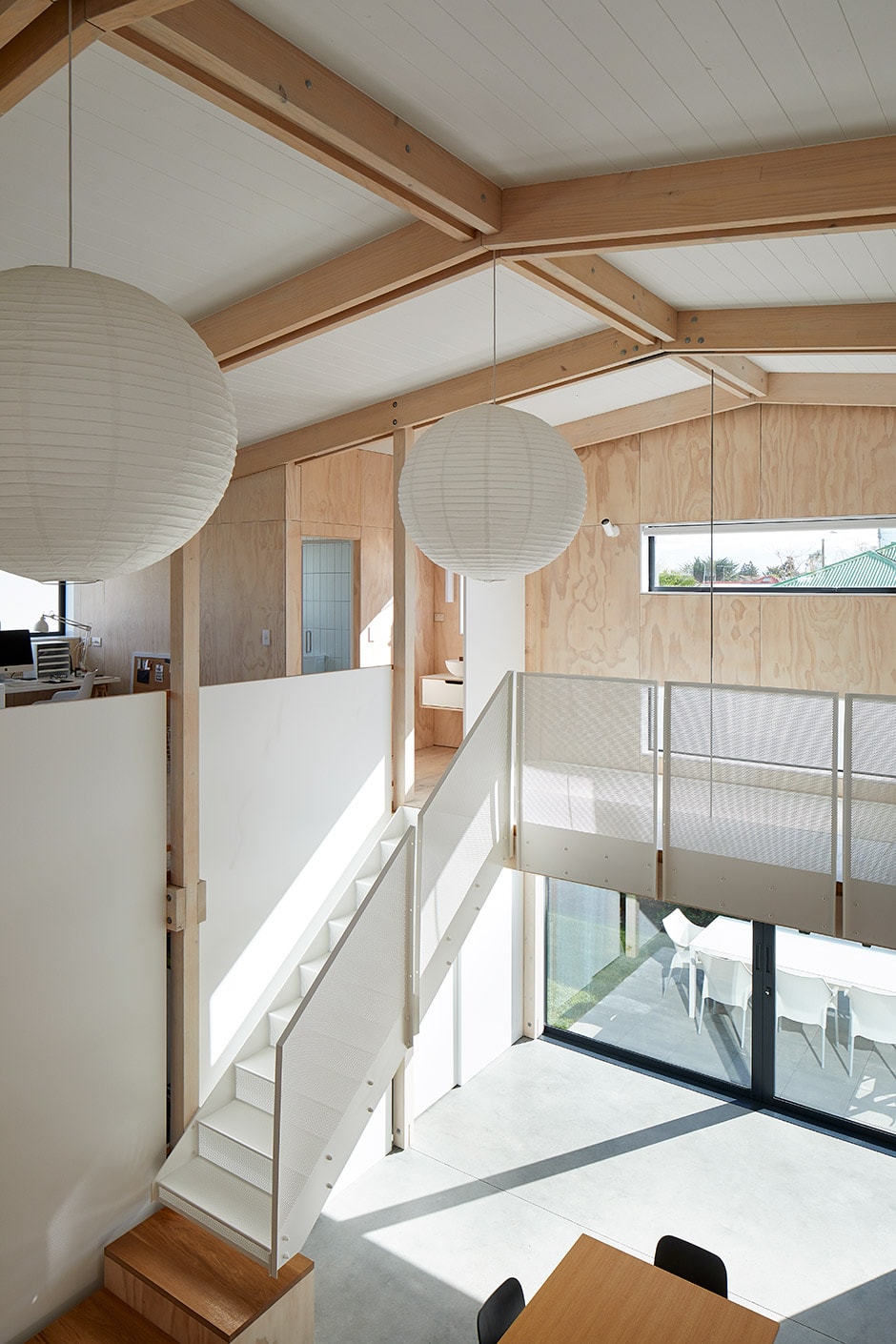 ABOVE First Windows & Doors’ Metro Series joinery with a powdercoated finish in Matt Windsor Grey adds contrast to the neutral colour scheme. The XLam Cross Laminated Timber panels used for the ceilings (painted in Dulux Okarito) and upper-level floor (whitewashed with Osmo) are a locally produced renewable resource and fast and efficient to install. Downstairs, the concrete-slab floor was chosen to provide passive solar gain. An amazing in-floor hammock for extreme relaxation is positioned on the wall side of the upstairs bridge.

A restrained palette of wood and white has been judiciously chosen to let the materials shine, and Nikki’s expertise has come to the fore in terms of the décor, including the furniture sensitively selected to enhance the modern, easy-living atmosphere. Clever details such as a built-in net hammock and windows that double as mirrors over the upstairs vanities provide playful elements of surprise.

Having lived here for only a few weeks, John and Nikki are still enjoying discovering the ways in which modhouse comes into its own in each season. “So far, everything has exceeded our expectations,” says John.
firstwindows.co.nz