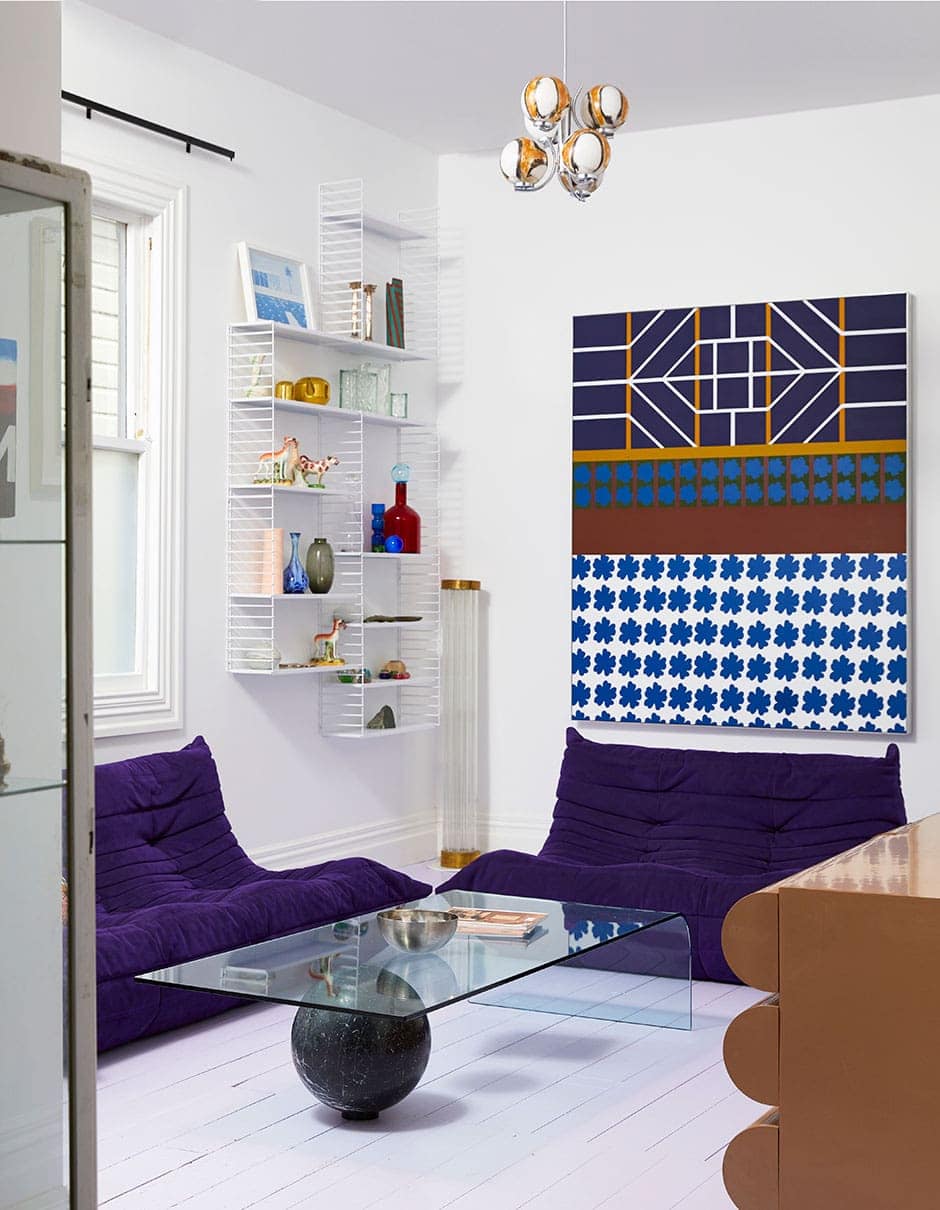 From the art on the walls to the purple floors, find out how intuition guides her.

‘Decisive’ could be interior designer Natalie Parke’s middle name — once her heart is set on something, the die is truly cast. She doesn’t really mind what you, I, or anyone else thinks of her off-the-clock choices, either — and the homes she reimagines for her family are all the more compelling for it. 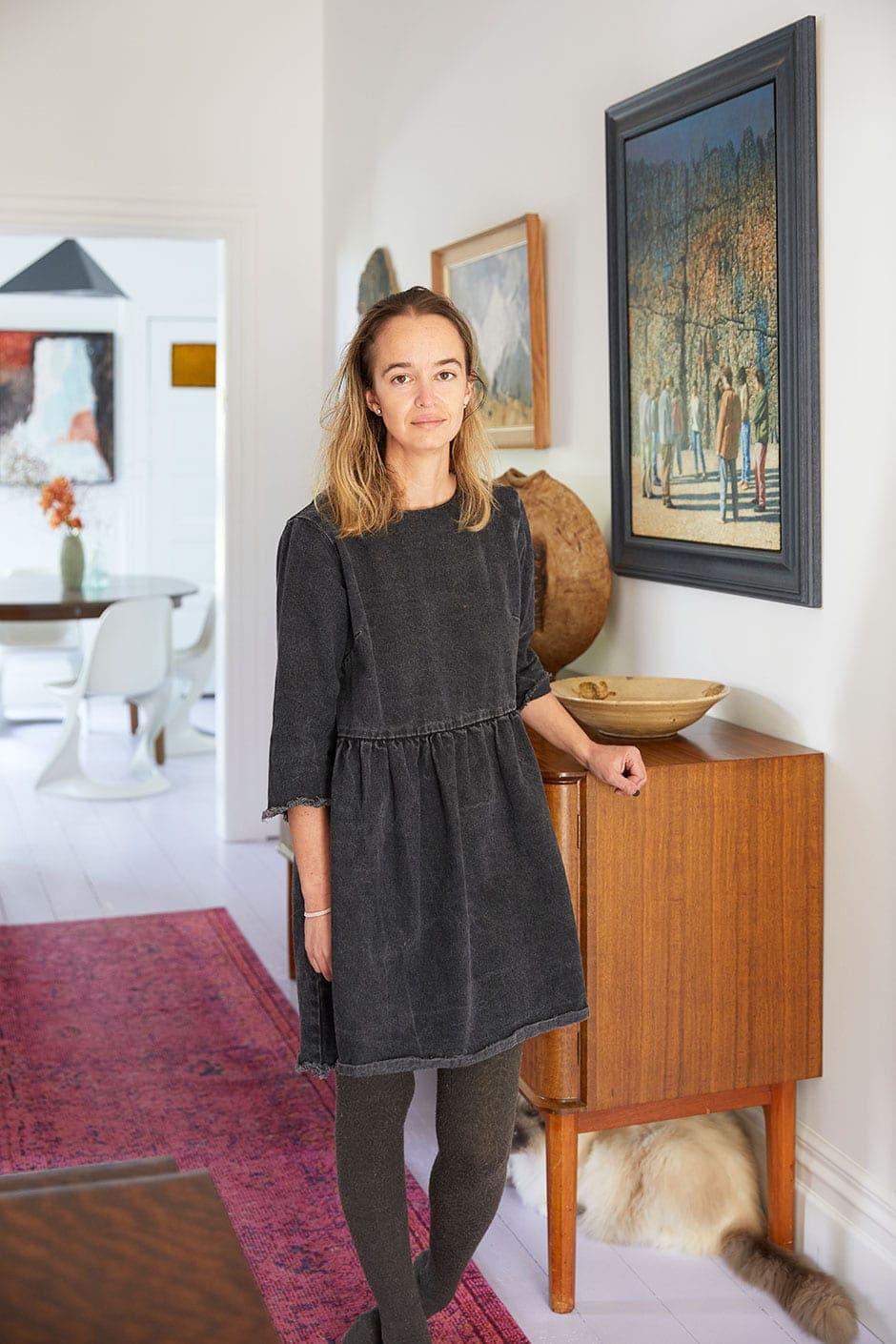 ABOVE The villa is relatively dark, so Dulux Okarito is a good equaliser on the walls. The floor is in Dulux Rabbit Island. Natalie leans on an inherited sideboard beside a Mark Cross artwork, Conclave. In the background, on the rear wall of the dining room, is Direct the Action by Matt Arbuckle.

An innately creative, “compulsive” doer-upper of houses, Natalie was ready for a challenge when she and her husband Gerry happened upon their new home — a neglected century-old villa on a sprawling 900m2 section in Auckland’s Grey Lynn. “It was in quite a state, but I’ve never been one to take the easy road,” she says. 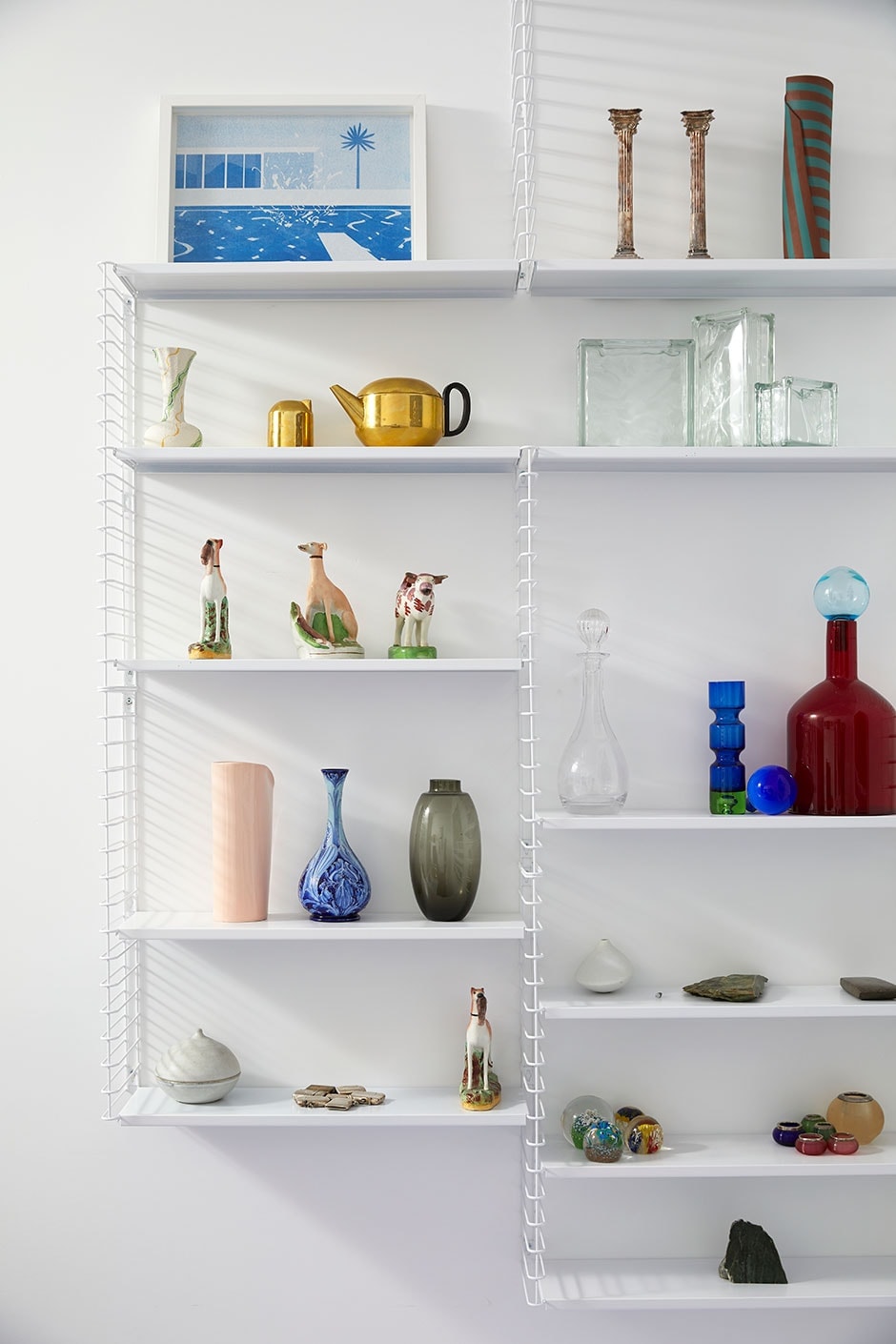 ABOVE Visual harmony is achieved on the modular Tomado shelves in the living area with family heirlooms and Trade Me finds. “For me, the art of creating a good collection is choosing stuff you love,” says Natalie. “As long as it’s balanced, it works.”

To bring the dilapidated house up to scratch, with the help of CTL Construction, the couple redid the roof, relined the walls, ripped out three fireplaces (resulting in a thought-provoking discovery in the walls: stacks of 1941 newspapers filled with political cartoons predicting how easy Hitler was going to be to thwart), put in a new kitchen and heat pump, painted the walls and floor, and reinstated some heritage details. The instant they set foot inside, Natalie had envisaged not a run-of-the-mill villa reno but “some kind of French apartment job — super classical and finely detailed but with quirks. That’s why we put the villa skirtings and architraves  back in — I really like the flourish of them, the twirliness and the drama.” 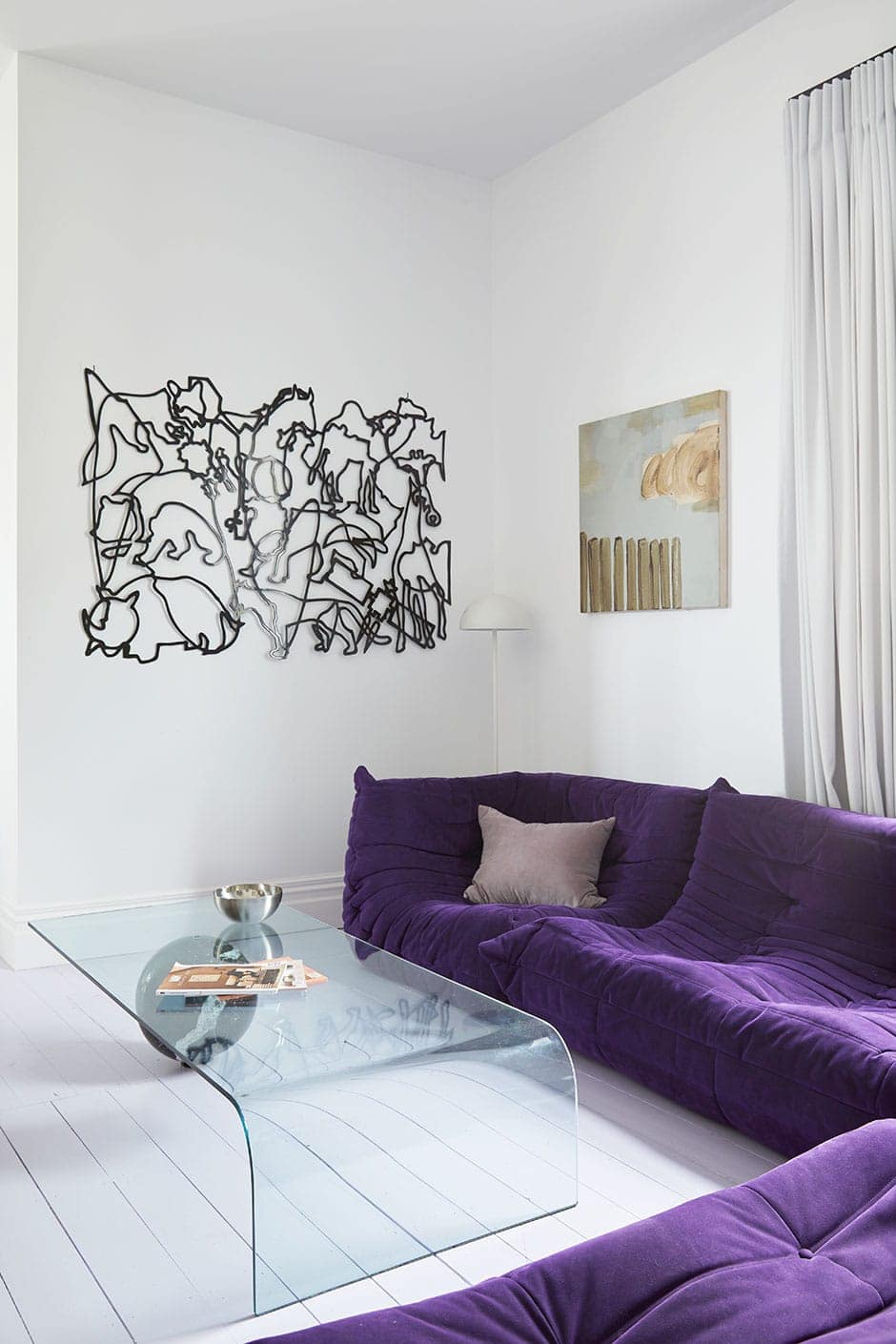 ABOVE The couple prefer to buy art they like and then find a place for it, as opposed to identifying a spot, then searching for art to fill it, which can sometimes mean you make compromises. This striking black piece in the living area is Compound by Yolunda Hickman and beside it is Looking Up by Christina Pataialii — both friends of the couple. Adding functional interest here are a Moon lamp and cushion from Città.

The lilac floorboards are in the same vein and were a typically instinctive choice. “I walked in and was just like, ‘This place is going to have purple floors,’” says Natalie. “I find it a really uplifting colour; it makes you feel safe and warm.” 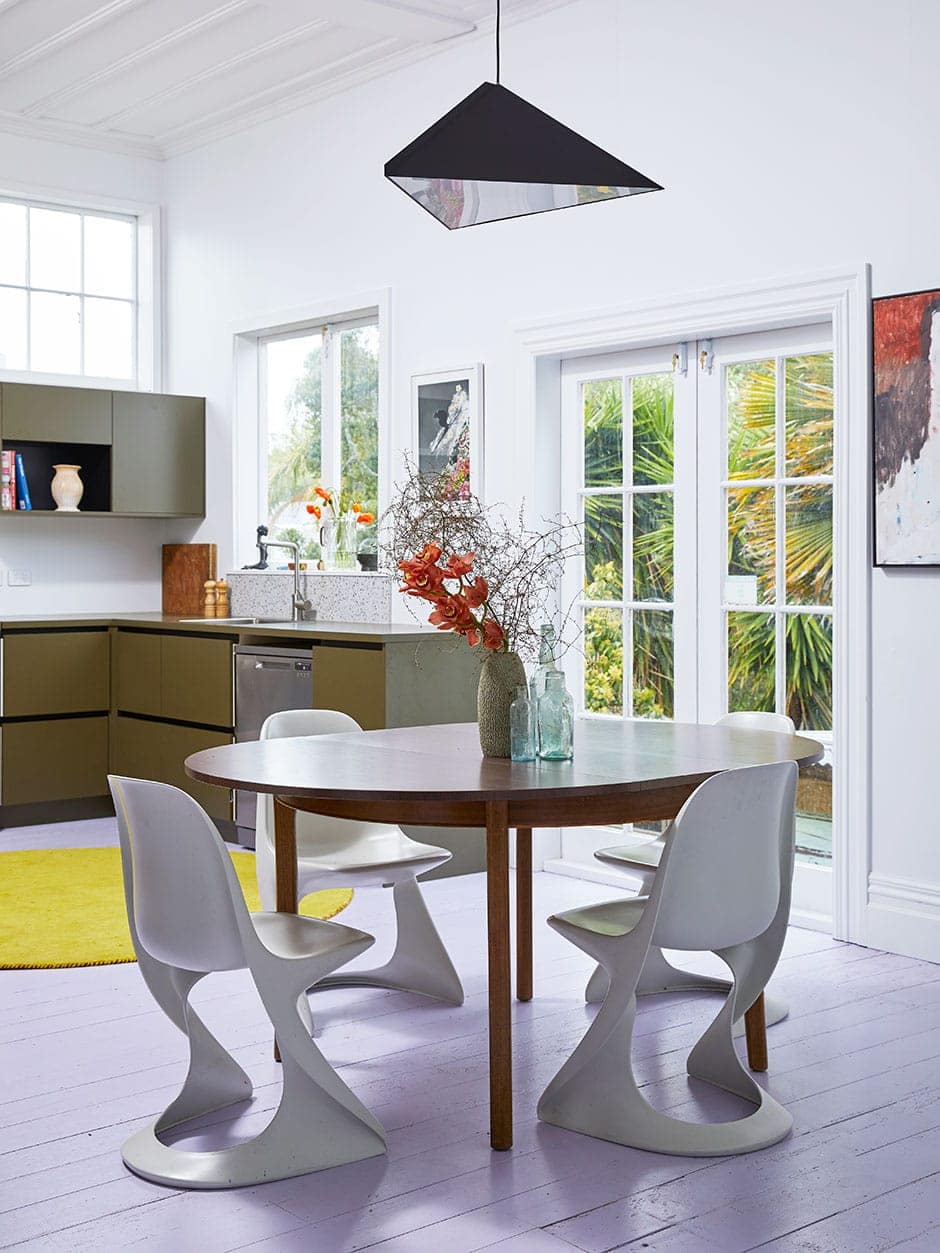 ABOVE Teamed with Abet Laminati cabinetry in Verde Oliva and Ecostone terrazzo tiles from Tilespace, the yellow rug in the kitchen has incited some unexpected behaviour. “It’s the weirdest thing, but every single member of our family lies on this rug,” says Natalie. “No one lies on the floor in the lounge, but we all do the kitchen.”

Gerry didn’t take any convincing, and neither did their kids, Cassie and Oren. “I’ve been doing interesting things to houses for a while now, so it doesn’t come as a great shock,” says Natalie. “In my line of work, it’s important to consider other people’s opinions and it’s more of a guided process towards their desired outcome — but my personal taste is definitely very different to the mainstream.” 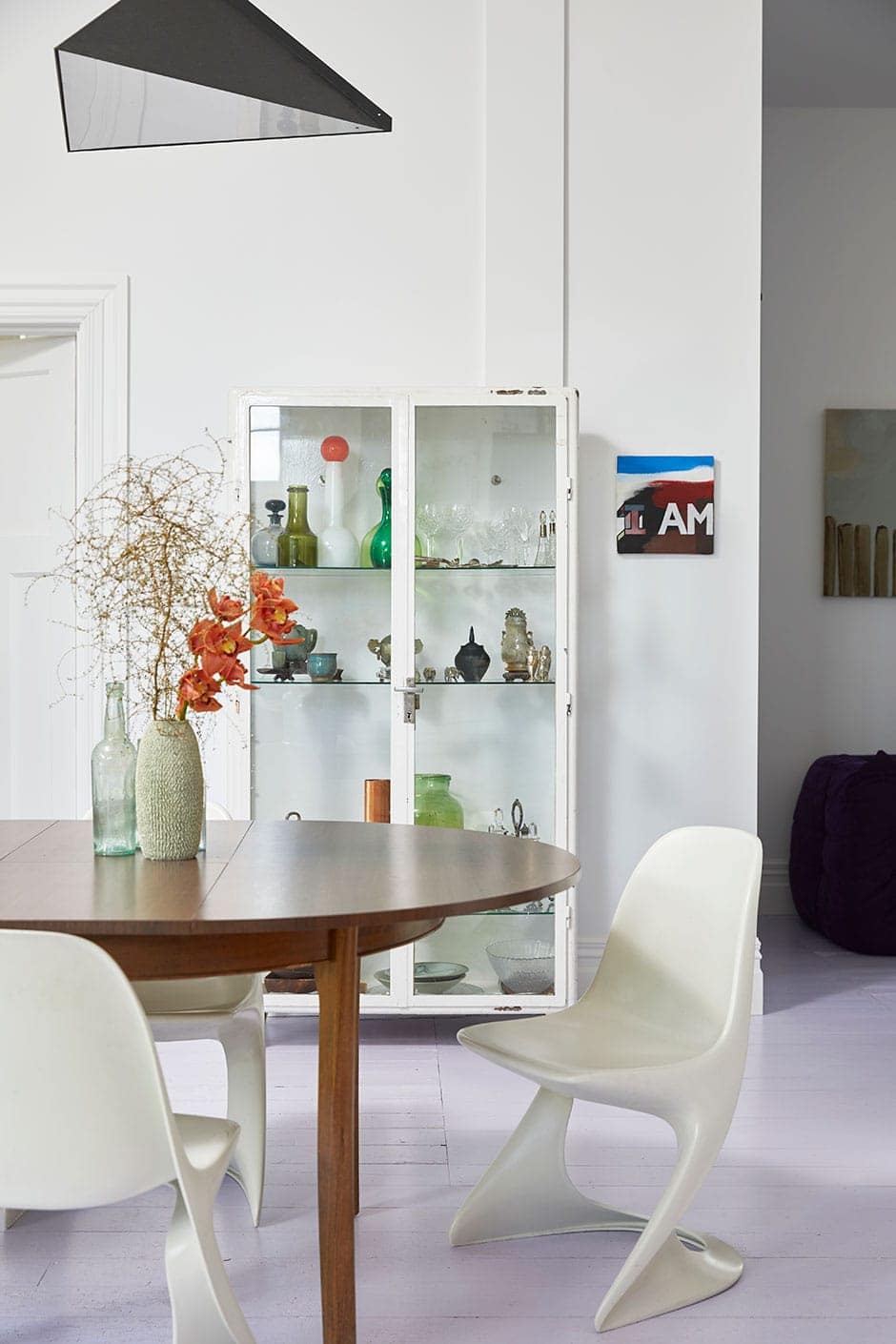 ABOVE The dining table is teamed with vintage Casala chairs by Alexander Begge for Casalino — all found on Trade Me. A cabinet from French-antique trove Vitrine houses several items that belonged to Natalie’s dad, including pieces in crystal, jade and silver. Beside it hangs Gerry’s artwork I Am.

Natalie describes her aesthetic as “a bit of a mash-up but often quite stylised. I love using colour in unexpected ways,” she says. “At the moment, I’m leaning a lot towards colour blocking for a more relentless and uniform look. The interior of this home has grown organically but it’s quite intentional — it’s purposefully twisted.” 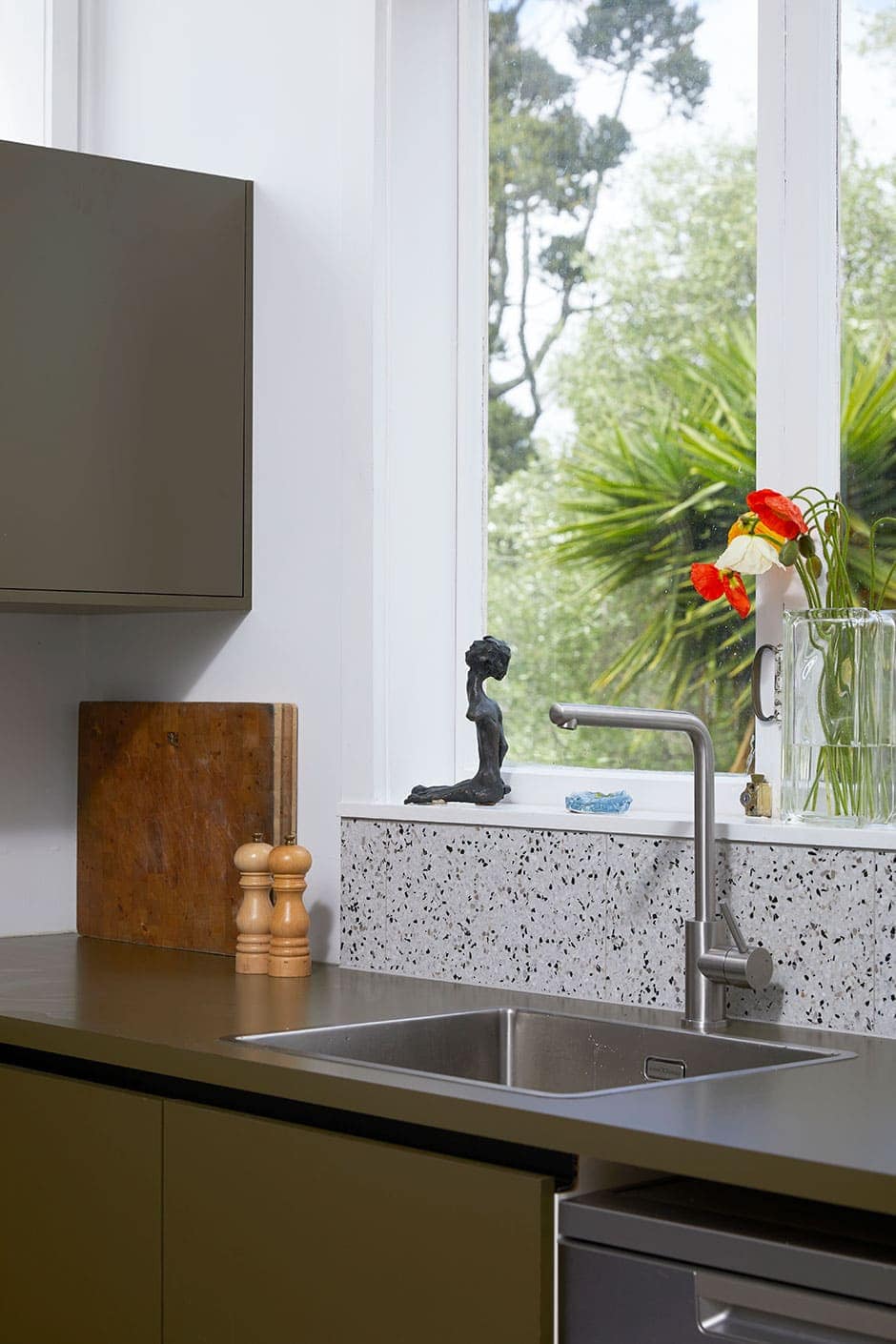 ABOVE That Gallic sense of unexpected contrast is exemplified in the kitchen: light meeting dark, old alongside new, and hard edges juxtaposing the circular rug. This bronze sculpture was made by Natalie’s father and the minimalist square-neck mixer is by Methven.

The kitchen is classic Natalie — khaki cabinetry, terrazzo tiles and a yellow rug, all against that purple floor — though she can’t say how she arrived at this combination.
“It’s the way my brain works; the process makes itself. To me, it’s about balance, harmony and intuition — feeling your way, seeing what happens. I think this palette works well and have no idea if anyone else agrees; when you get to the point where you’re putting lilac and yellow together, you can’t really worry what other people think! I feel as if that helps you to foster that creativity a bit more, stop second-guessing yourself and just own your decisions.”

Showcasing her affinity for mixing old and new, the décor in the lounge is dictated by a Togo sofa by Michel Ducaroy for Ligne Roset and a large-scale artwork (Deborah Enters, the Deed is Done) by Esther Stewart — bold choices anchored by a sculptural vintage coffee table from Babelogue, a bull-nose dresser from Mid Century Swag, shelving by Tomado from Mr Bigglesworthy and a 1970s chandelier bought off Trade Me. 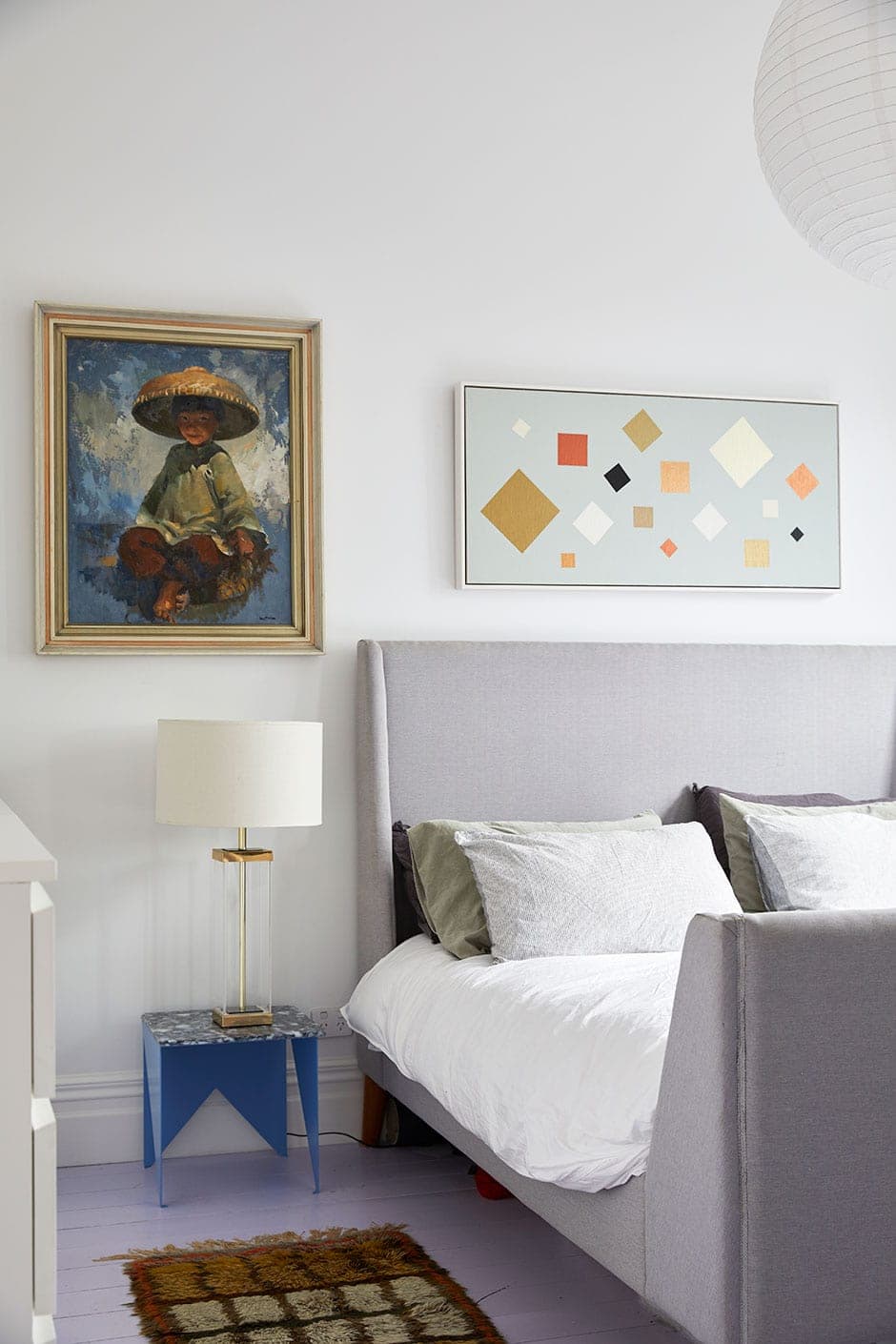 TOP The artworks in the master bedroom include a portrait by Peter McIntyre and After Kauri by Jessica Pearless. Beside the bed, a pair of lamps from Trade Me sit on recycled plastic side tables Natalie designed herself. She suspects it’s the lighting in this home that brings her the most joy. “I’m a lighting geek,” she says. “I love the oversized paper lanterns [from Wah Lee] in the bedrooms, which help to soften the spaces; the angularness of the pendant in the dining area [a Trade Me score]; and the chandelier in the lounge, which is so ’70s.” The oak and rattan sideboard is from Freedom. ABOVE This painting, Bananas, is another of Christina Pataialii’s works; to its right is The Keyboard: Salvation by Jae Hoon Lee. “This room is basically the toned-down version of a ‘Natalie’ room,” says Natalie. “I like that it’s soothing and calm, thanks to the muted tones of the bed, but I also love the drama of the velvet curtains [opposite, in fabric by Casamance from James Dunlop Textiles].” 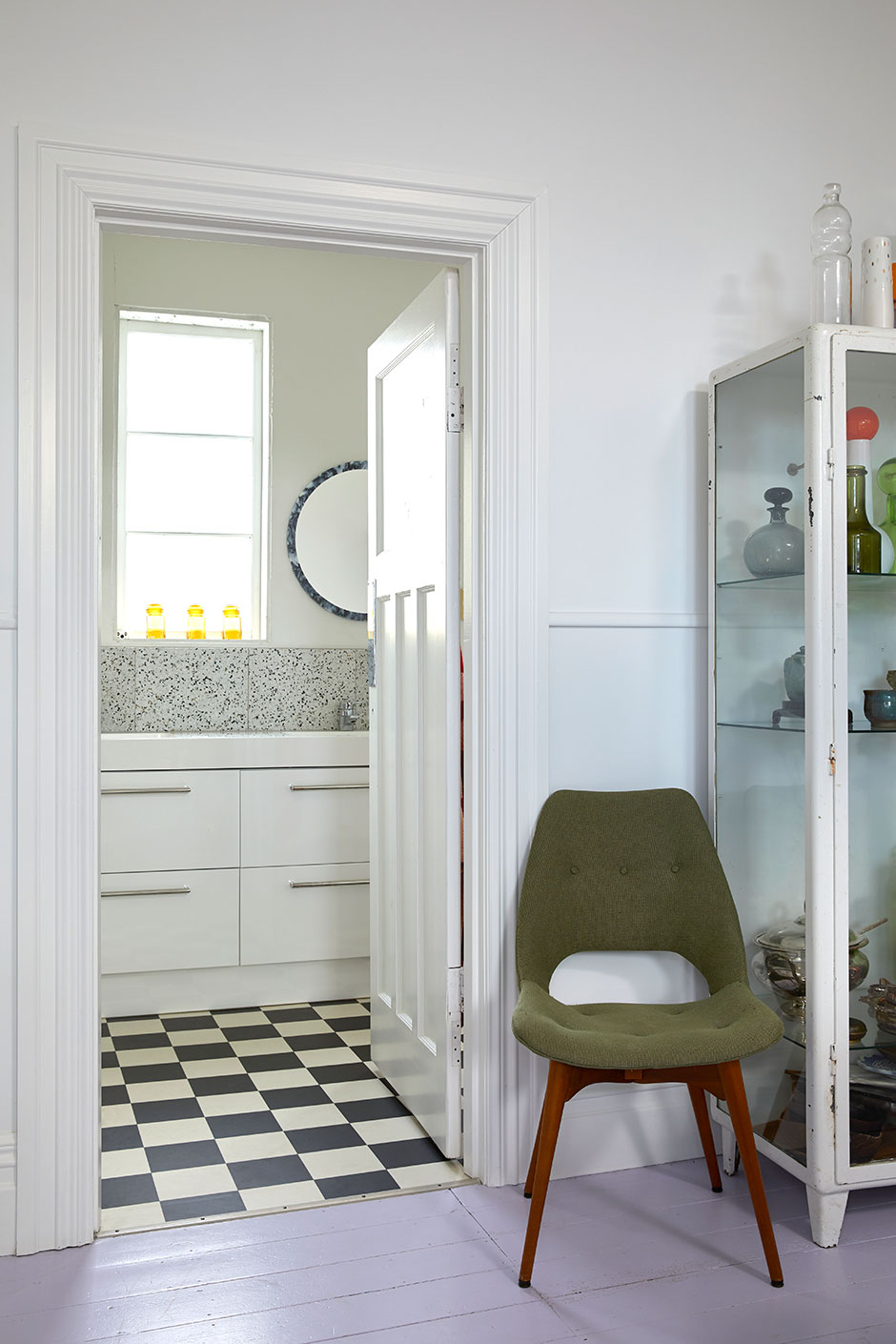 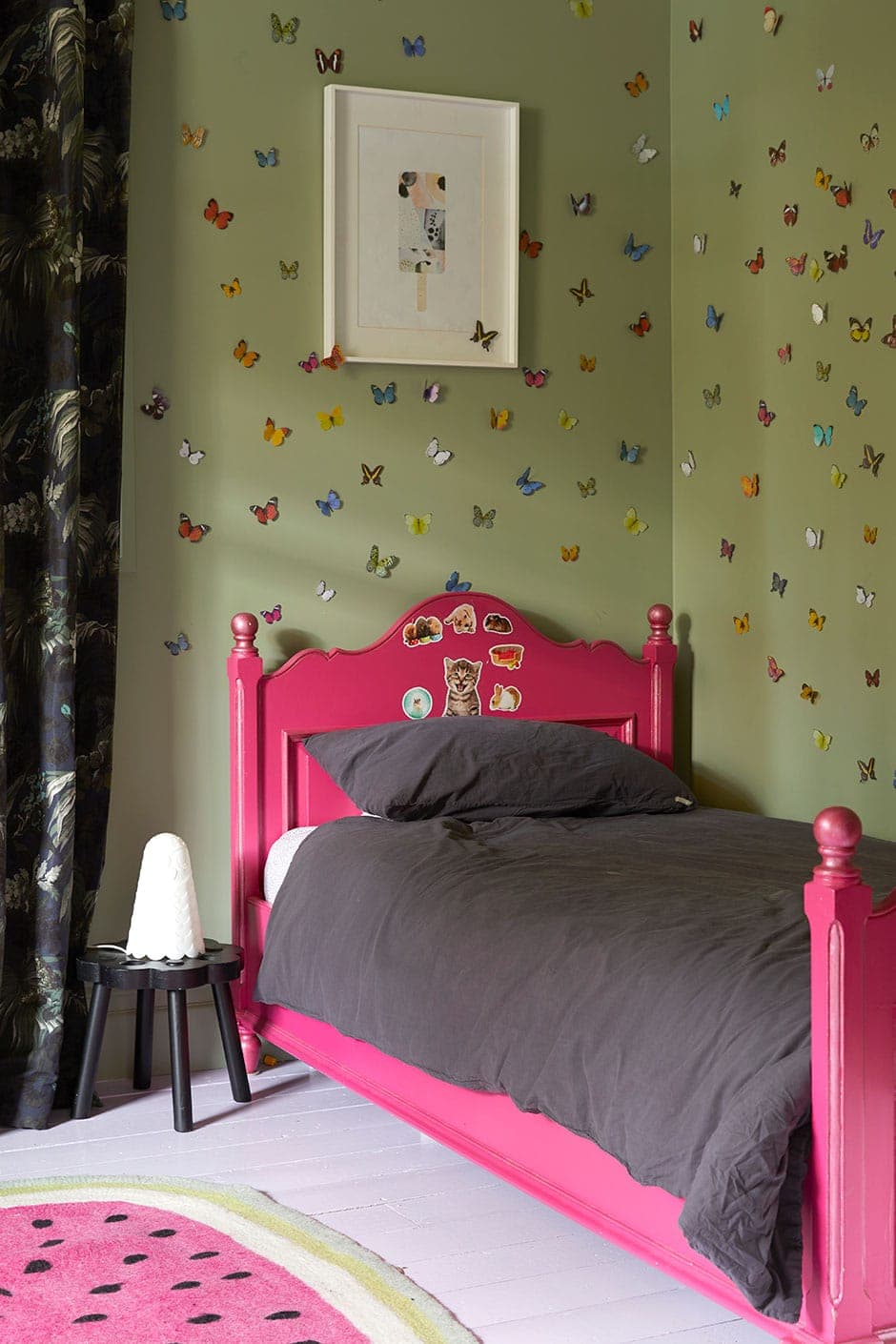 TOP The existing bathroom has remained untouched but for a mirror Natalie designed and new terrazzo tiles to match those in the adjacent kitchen. Looking smart outside it is a chair by Grant Featherston. ABOVE “Cassie wanted a jungle bedroom, so that’s what she got,” says Natalie, who decorated this space with Dulux Ardmore paint, curtains in fabric by House of Hackney and 100 packets of pretty butterflies she bought off Etsy (along with the framed prints) and affixed one by one.

Art also nurtures Natalie’s creativity and plays into her practice at her studio, Dessein Parke. “It’s always been central to my life and the way I put together interiors,” she says. “My approach comes down to colour, form and storytelling, and I love pieces that have a history. I don’t buy that much new stuff and a lot of what I do buy is made by people I know. There’s something really nice about having an emotional connection to the things in your home.”
As visually impressive as this décor is, it’s deeply felt — and suited to family life. “You can have all these ideas, but if they don’t function from a basic perspective, what’s the point?” says Natalie. “It needs to be practical — apart from the floor, but that’s cool, so I don’t care.”