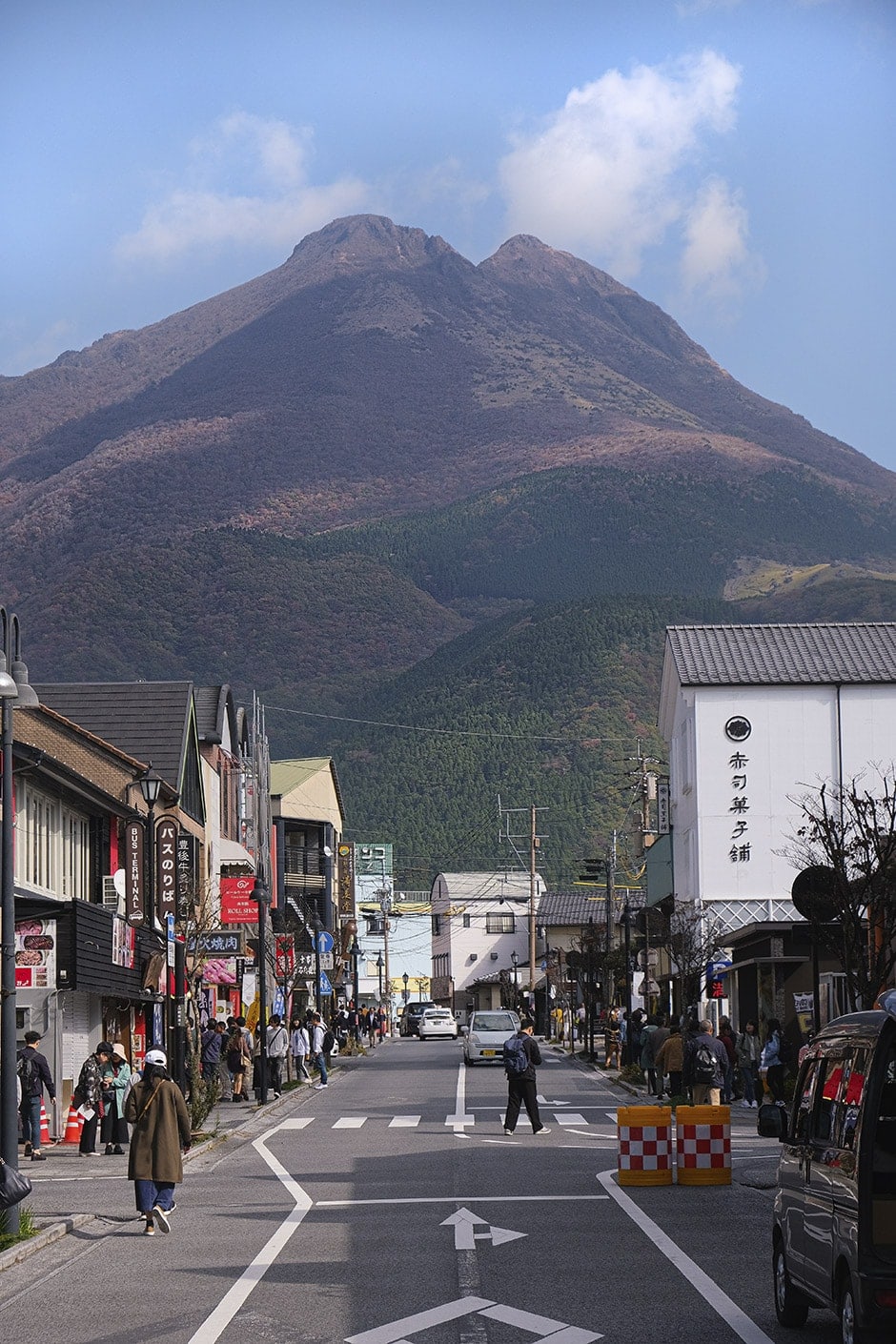 It’s an off-the-beaten-track escape to a spot where creativity bubbles beneath the surface and hot springs steam their way to the top.

In eras past, Oita — a prefecture on the island of Kyushu in south-western Japan — was known as Toyo no kuni, meaning ‘land of abundance’. The term was coined to reflect the vast array of food on offer from the mountains and the sea, and the concept still resonates today. This area is indeed a beautiful setting in which to experience abundant delicacies, as well as hot springs and hospitality — the combination a recipe for some serious rest and relaxation. 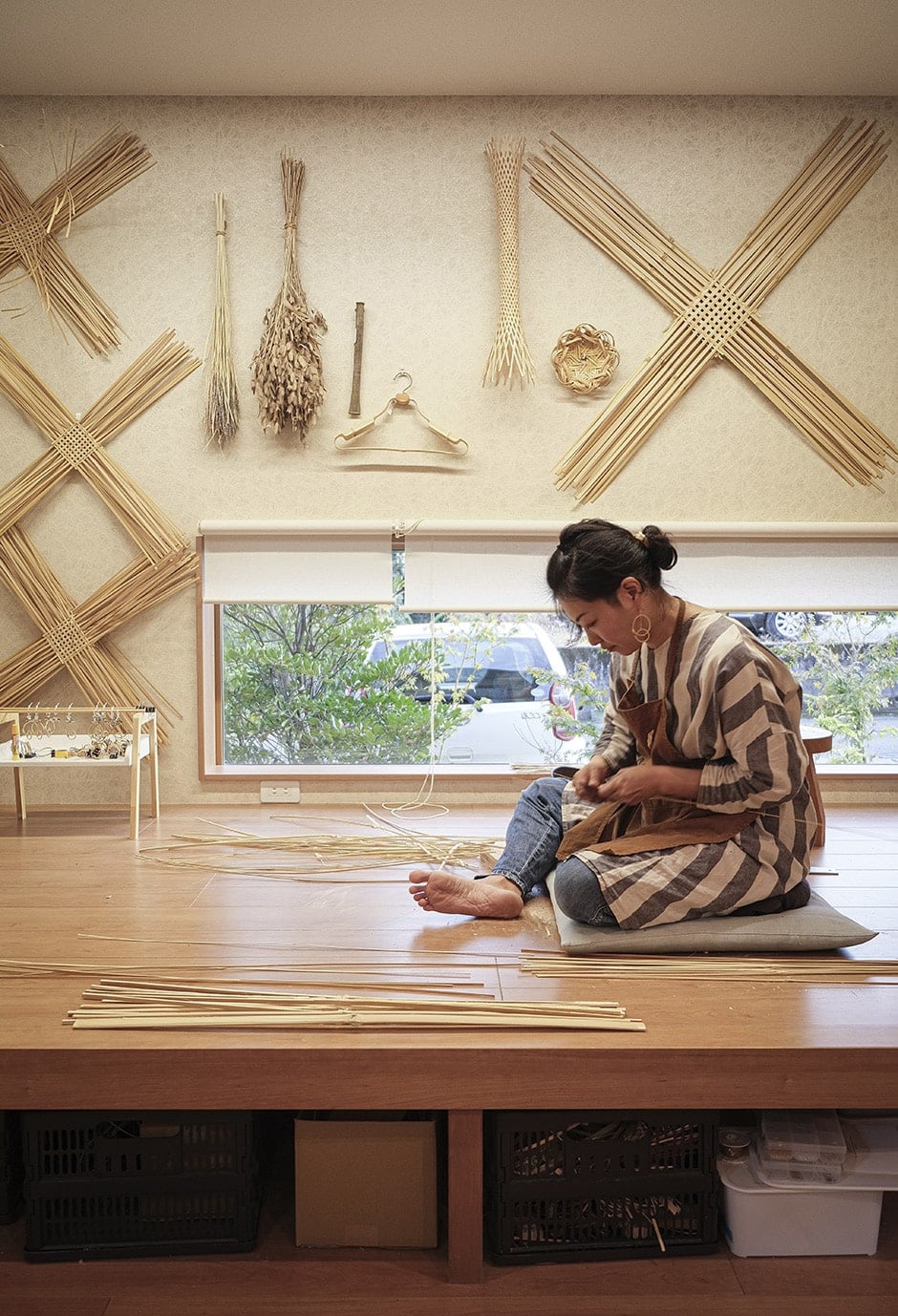 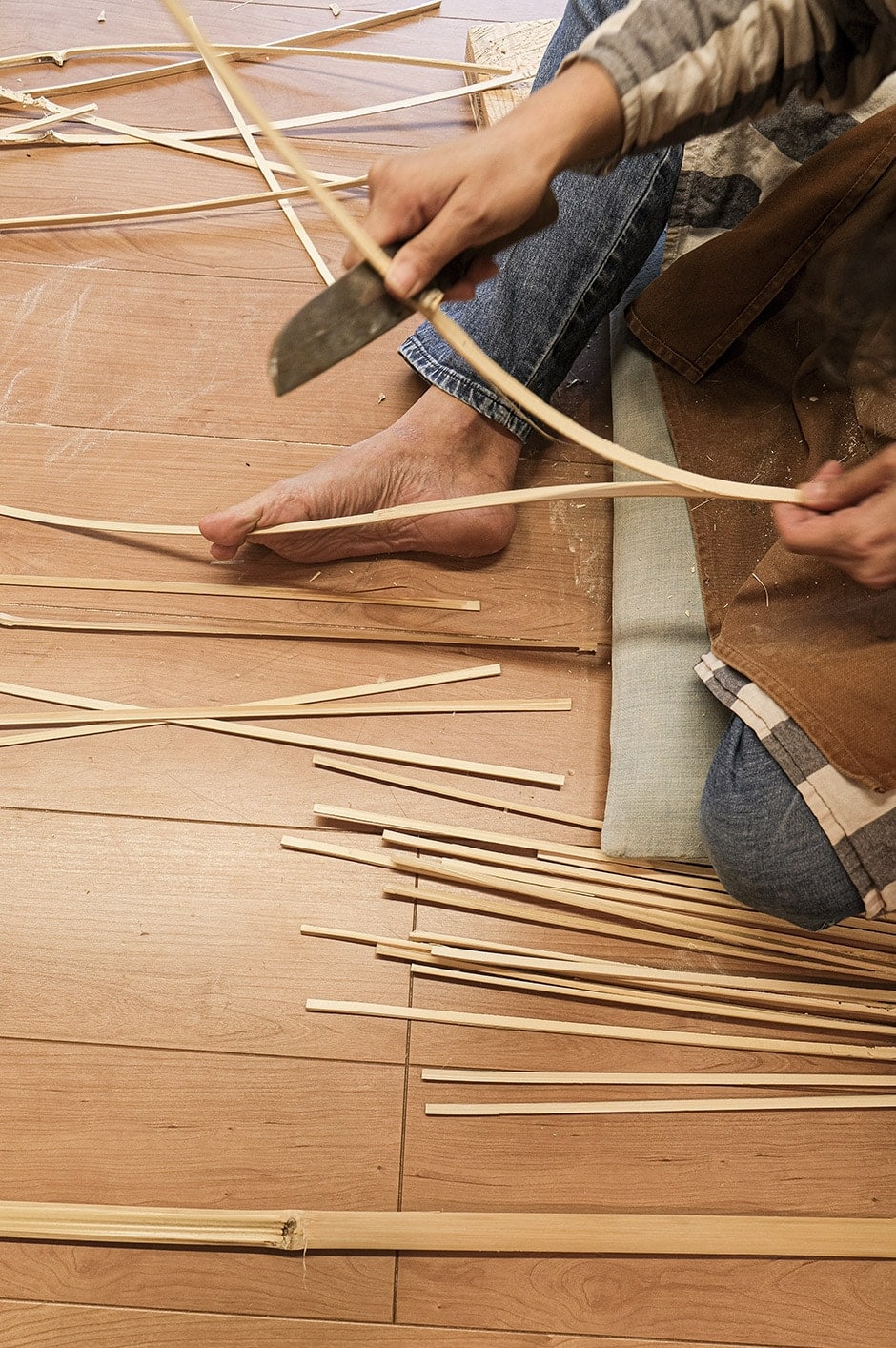 MAIN IMAGE Looking across the bay to Beppu at sunrise, the steam billowing from the city’s many onsens looks industrial, but it’s actually completely natural, emanating from the hot springs they harness. ABOVE Bamboo baskets and vessels are delicate yet pliable and sturdy, making them beautifully expressive. Having previously worked as a chef, Mikiko Sato of Cotake had a change of heart that led her to study at the Oita Prefectural Bamboo Craft Training Centre in Beppu. The government-run school for bamboo weaving accepts just 12 new students each year, and its graduates are held in high regard nationwide for the work they go on to make.

The coastal city of Beppu alone is home to about 2000 onsens with a combined hot-spring output greater than any other area in Japan. Public steam baths, ryokans (inns) with intimate bathing facilities, mud baths, sand baths where you can be buried in heated sand… you can experience it all.

Culinary culture and bathing rituals aren’t the only thing Oita is known for, though. There’s a legacy of arts and crafts here that a new wave of artisans is adopting to carve out an alternative way of life for themselves outside of the main centres. 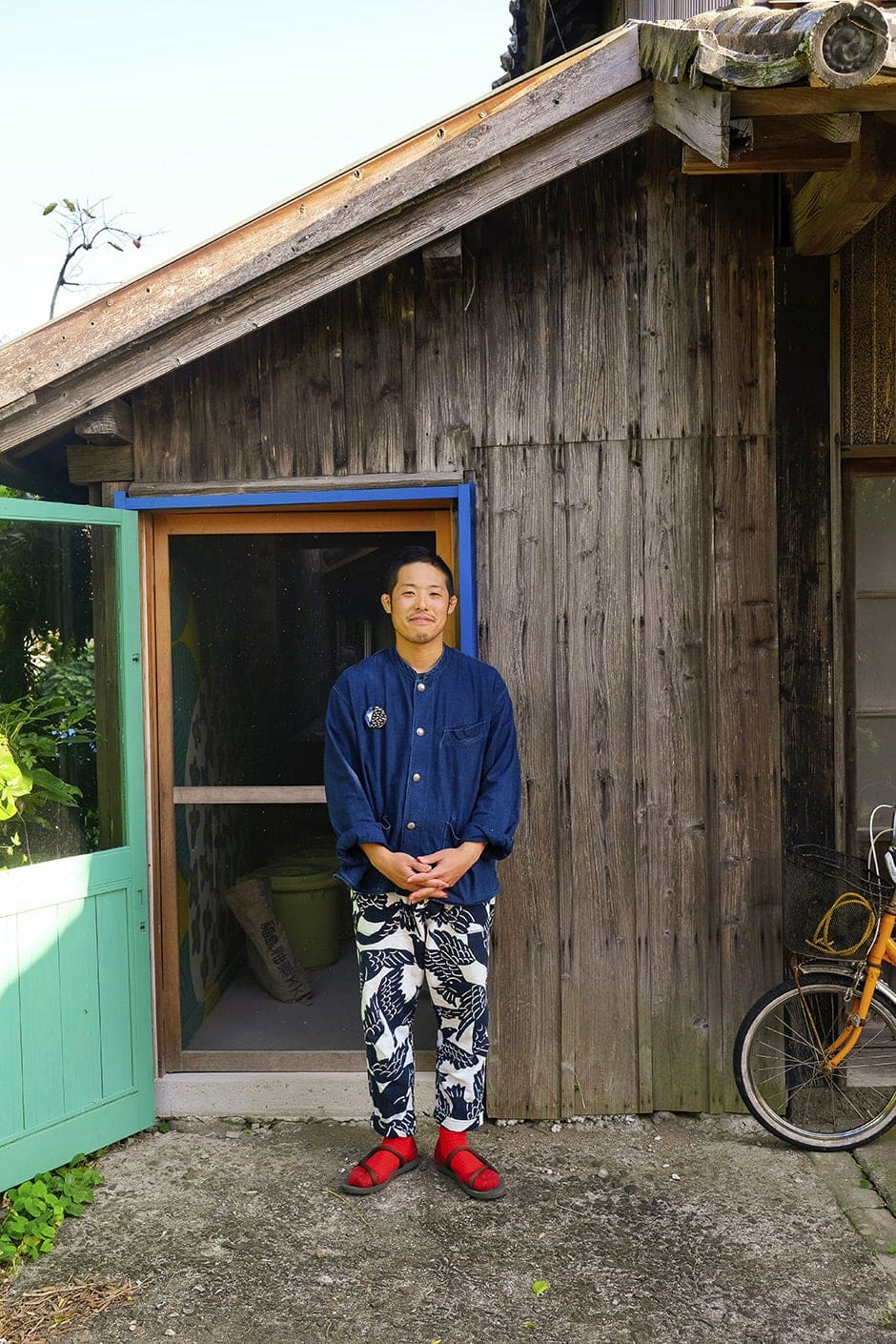 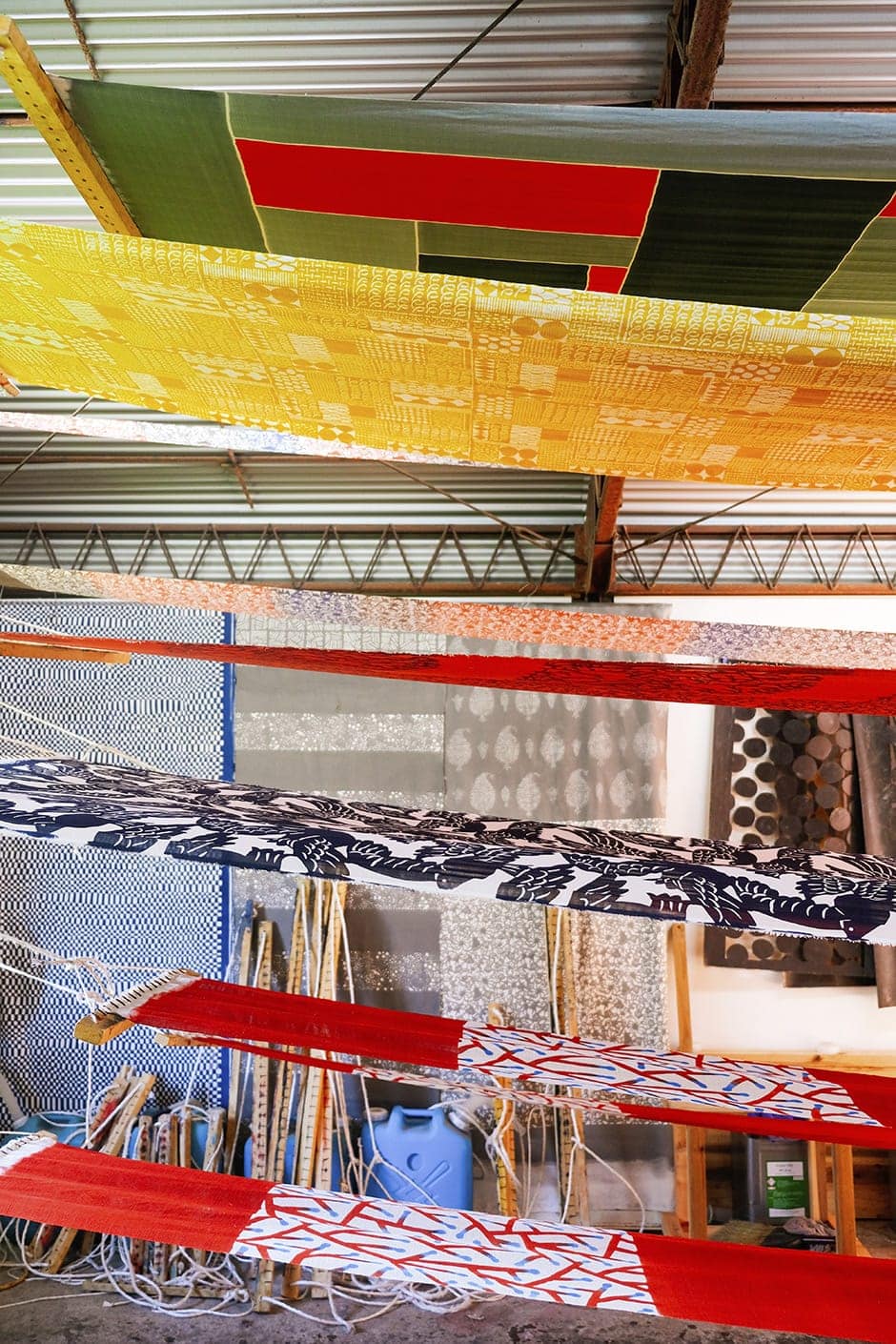 TOP Toyokazu Ono outside the house he moved into with his family four years ago, after relocating to Kunisaki from Hiroshima. The move was incentivised by a government initiative that attracts young people to rural areas, where the main drawcard is being given a free home. ABOVE The katazome dyeing process in the Yotsume workshop. Lengths of fabric are strung up to print with stencils, then dry.

My host on this trip was Eiko Hashimoto, a producer at the Oita Asahi Broadcasting Corporation; I tapped into her knowledge of the region to visit makers, food producers and hospitality specialists who have found their creative calling here. We teamed up with Oita Made — an initiative developed to revitalise the creative economy by stocking independent artisans’ products in a dedicated store and supporting their distribution — to visit the studios and workplaces of some of the people they champion.
In Beppu, Cotake — the workshop and store of Mikiko Sato — is a great place in which to observe bamboo crafts in action. Mikiko specialises in fine bamboo jewellery and also sells a range of intricately woven baskets, trays, kitchenware and decorative objects. The skill involved in splitting a hollow round of bamboo into the thin strips required for weaving is really quite something to witness. 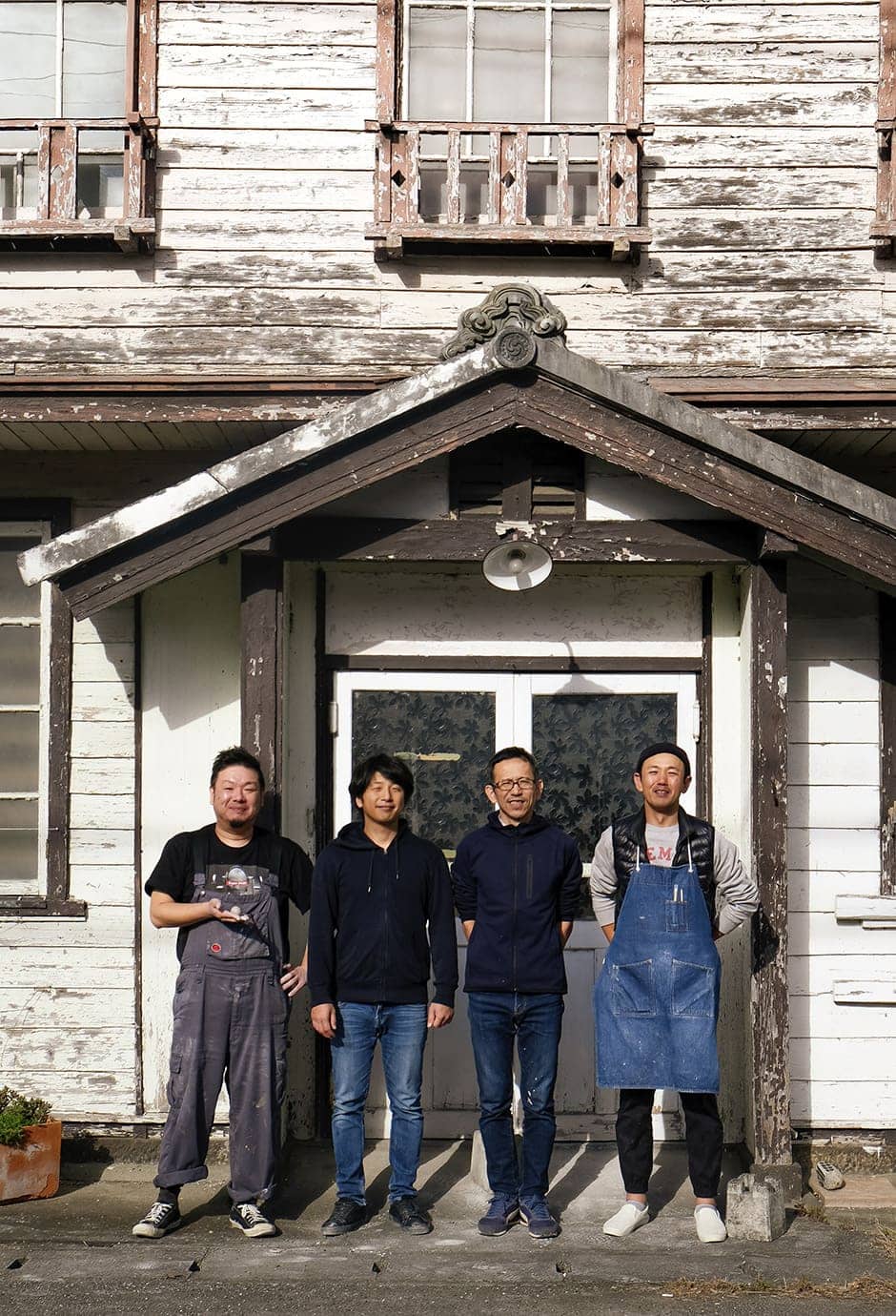 ABOVE Hiroyuki Usami (second from left) and his team outside the Usukiyaki studio. Working alongside them, Yakushiki Kazuo of Elan Workshop (second from right) produces earthenware items that provide a rustic contrast to their porcelain ones.

Toyokazu Ono runs his textile art and graphic design practice, Yotsume, from his home in Kunimimachi Imi at the northern end of the Oita Kunisaki Peninsula. Focusing on the traditional method of katazome fabric dyeing, Toyokazu hand-cuts elaborate stencils that are then adhered to fabric and hand-painted with dye, before being made into table linen, coasters, cushions, noren (room dividers) and clothing. He learned the trade from his father and grandfather before him, but his own aesthetic is decidedly contemporary, with bold, figurative prints all hand-drawn and brought to life in striking colours. 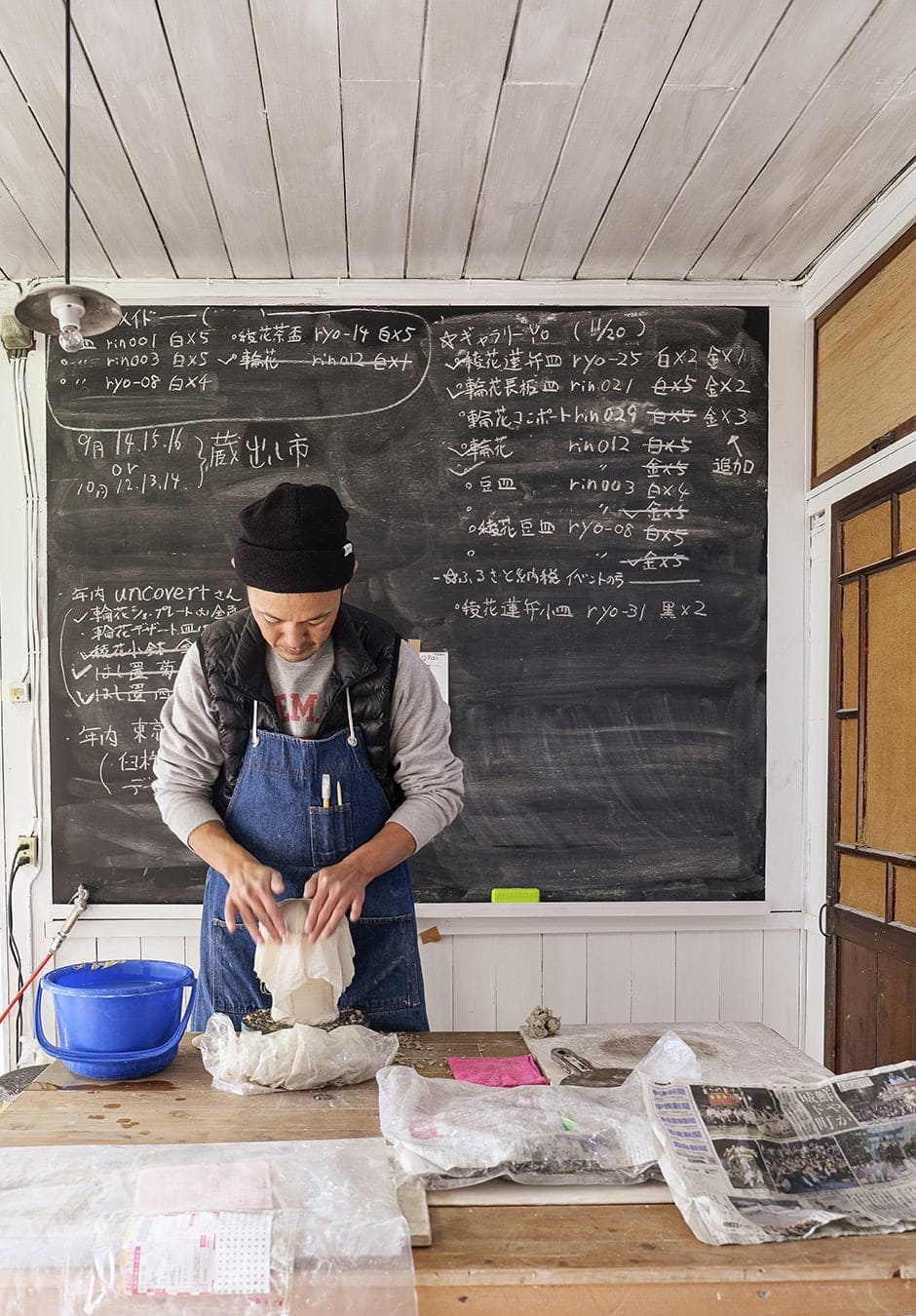 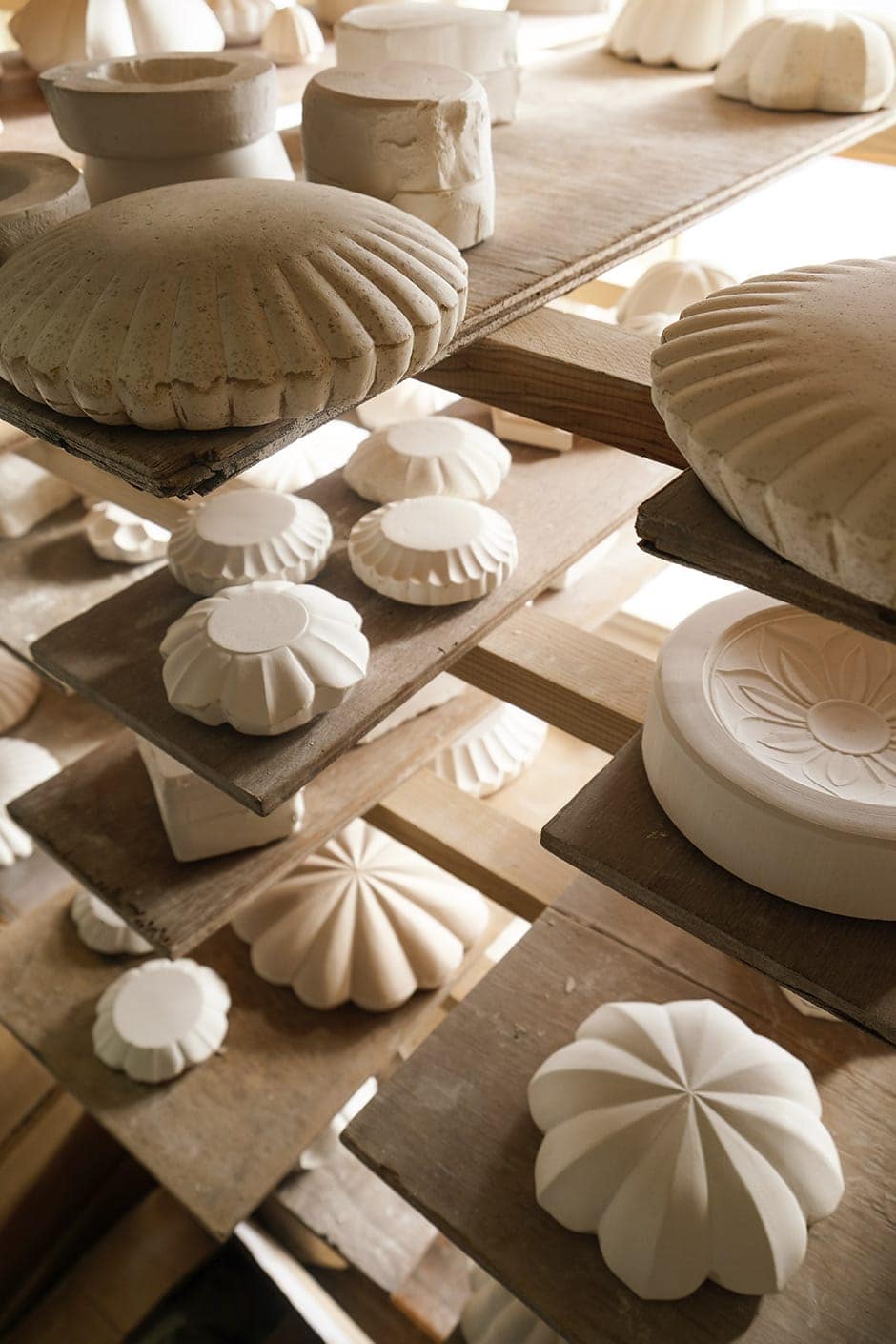 ABOVE Usukiyaki’s botanical-esque pieces are made from slabs of clay shaped over hand-carved moulds.

On the outskirts of Usuki, an old castle town known for its stone Buddhas, the Usukiyaki studio is abuzz with the production of fine porcelain ceramics. The story goes that the Usukiware aesthetic was prevalent in the Edo period (1603 to 1868) but somehow abandoned. Centuries on, Hiroyuki Usami and his team are reviving this art form using historical records to inspire modern tableware. 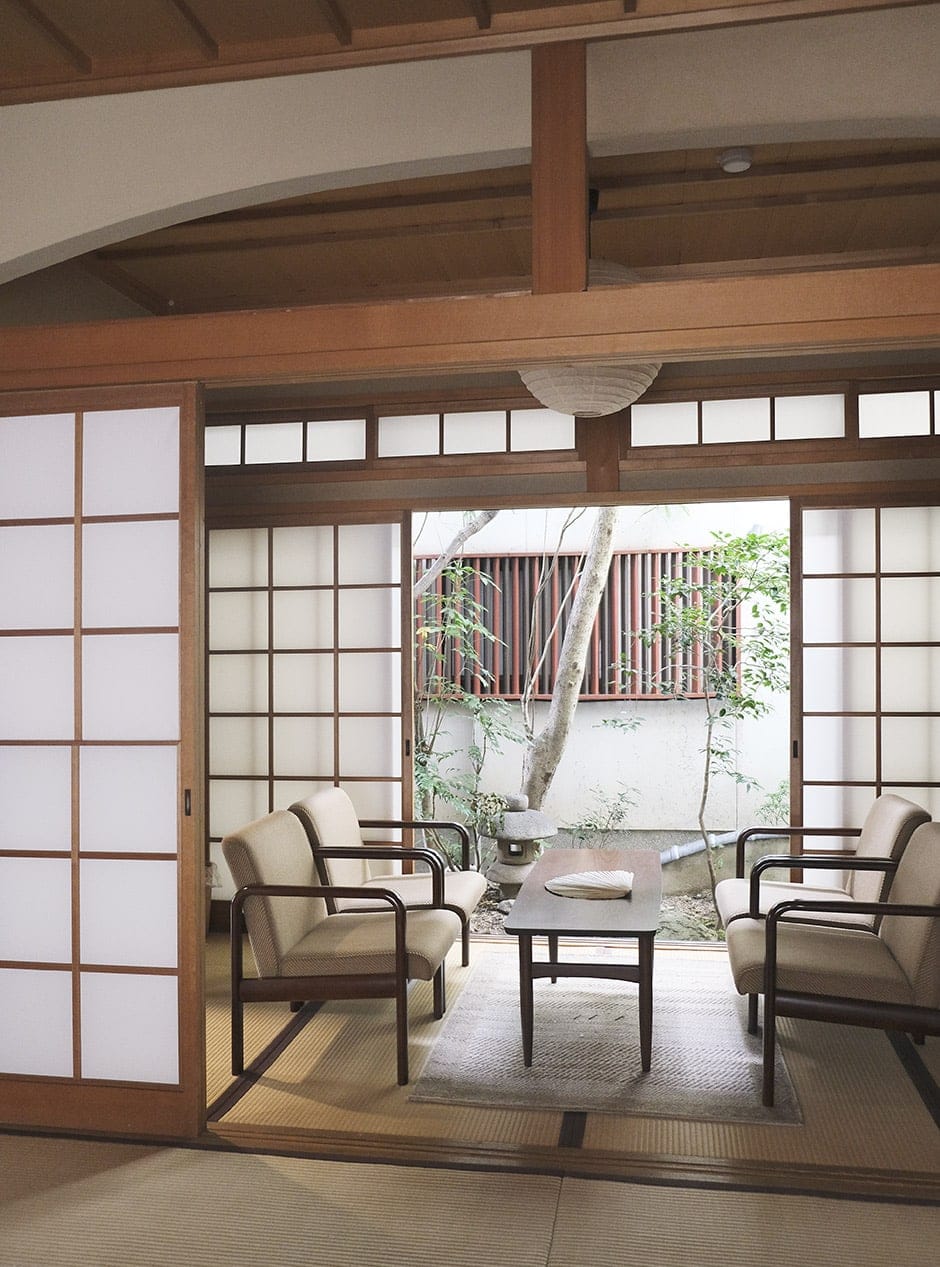 ABOVE Kannawa — one of eight neighbourhoods in Beppu hosting all things hot springs — is a wonderful spot to explore on foot. Take a stroll along the cobbled streets to discover all the ways in which locals use steam in everyday life. The accommodation on offer is predominantly ryokans, and the one I stayed at, Yanagiya, has been sensitively renovated to celebrate the welcoming mood this style of stay is known for.

Usukiyaki’s signature look comes together as a collection of rounded bloom-like shapes, using lotus flowers and chrysanthemums to inform pieces including tiny condiment dishes, delicate cups and grooved cake plates. Their aim is to create dishes that frame the food served on them, and the result was put into practice when I was lucky enough to enjoy lunch prepared by Hiroyuki’s wife Yuka, who runs a wholefood catering business. The meal included local specialities fried chicken, miso, preserved vegetables and thick hand-pulled noodles, all served  in Usukiyaki dishes. 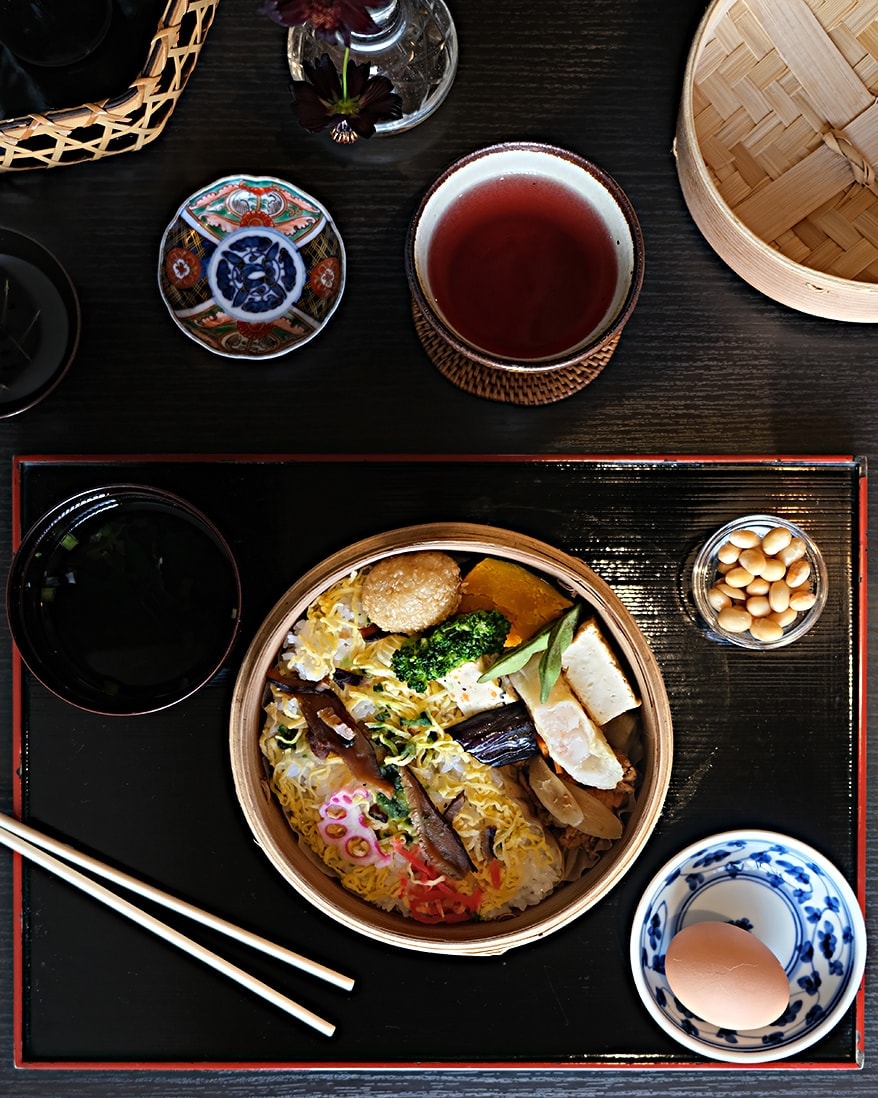 Hospitality is a true art form in Japan too, and staying at an authentic ryokan provides an opportunity to indulge in cultural rituals without feeling too touristy. In Beppu’s Kannawa neighbourhood, Yanagiya keeps the customs of inn hospitality alive with breakfast served in  bamboo baskets that open to reveal steamed savoury morsels, an outdoor cooking area where you can prepare your own meals over steam vents, and an on-site onsen. Ryokan owners take pride in hosting their guests, and at Yanagiya, owner Eiko Hashimoto was kind enough to take me on a morning walk to show me sights otherwise hidden among the winding cobbled streets.
Okamotoya is another charming ryokan. On the hillside in Beppu, it has a view across to Beppu Myoban Bridge arching over the bay. Sliding shoji screens separated my room from the corridor, and inside the tatami flooring was sparsely decorated with little more than a chabudai dining table and a futon that’s whipped out before bed. 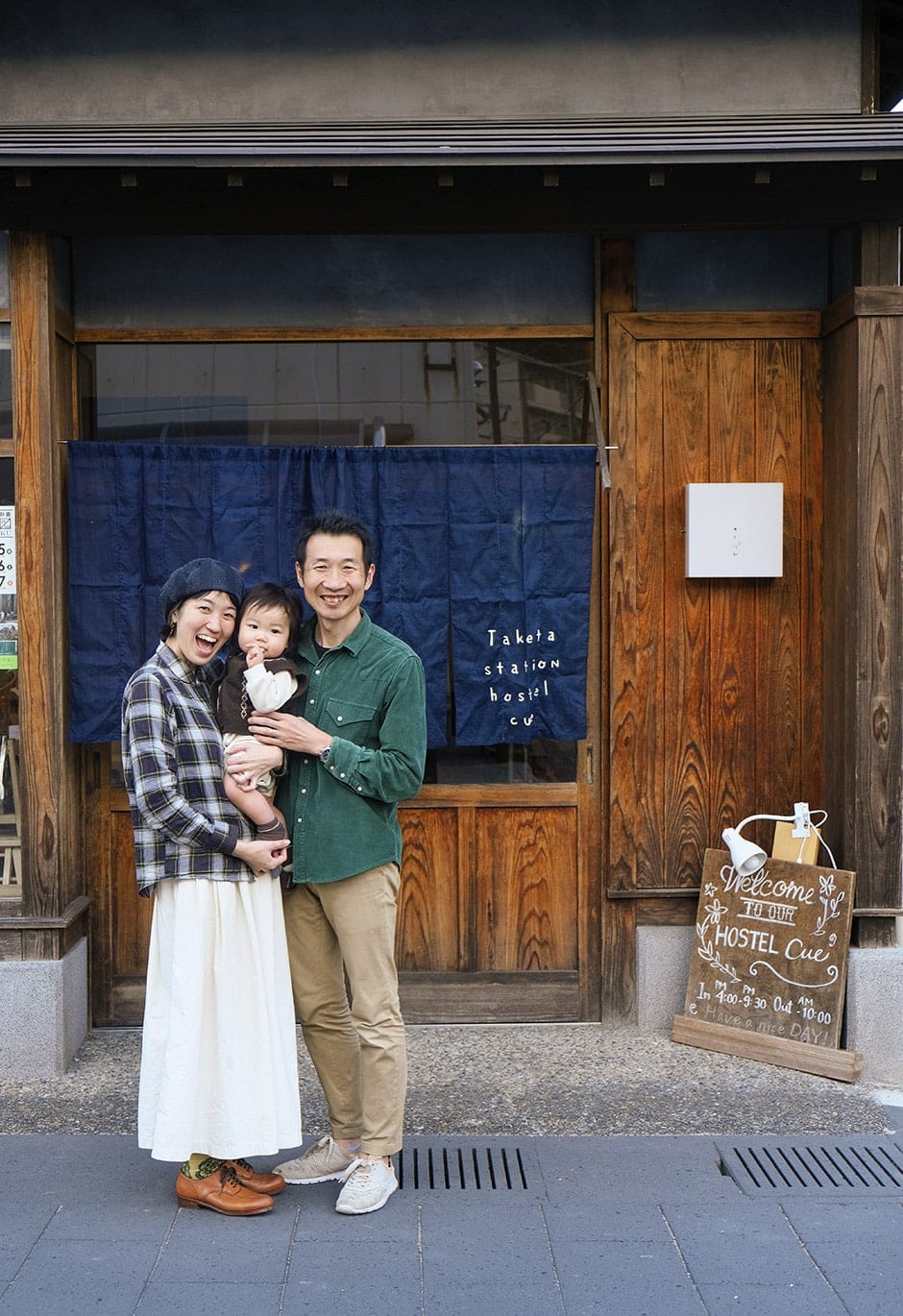 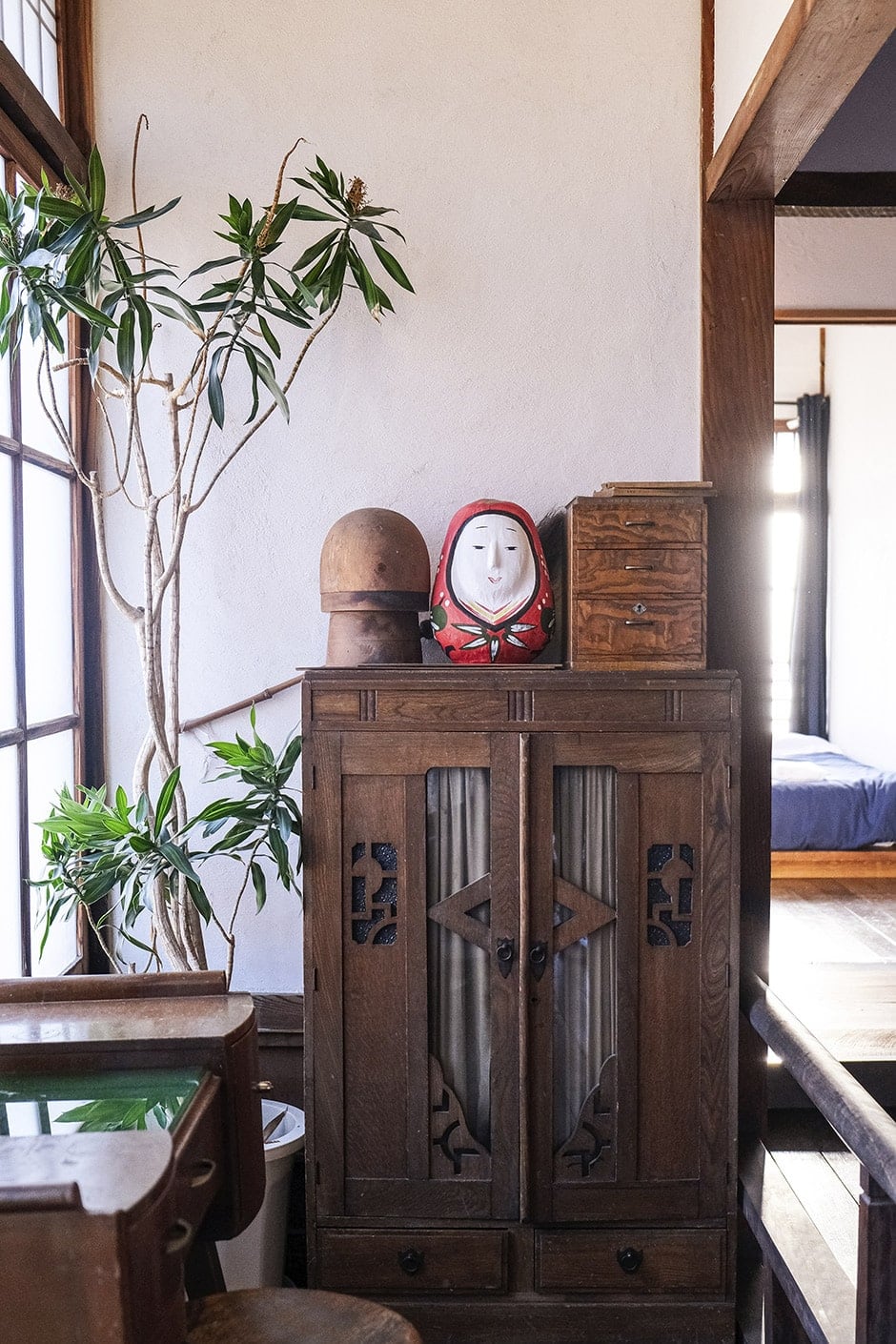 TOP & ABOVE Two more creative entrepreneurs I encountered on my trip were the owners of Taketa Hostel Cue, Sakura (left) and Takao Horiba, who’ve also bucked the trend of urban migration to establish a more relaxed life for themselves in Oita. They took possession of a rundown building and renovated it using reclaimed materials and vintage finds to create an understated backpacker hostel. The upstairs sleeping quarters accommodate 15 people in double, twin and bunk rooms, and the couple have a wealth of travel tips to share with their guests.

That night, I enjoyed a multi-course kaiseki dinner of famed Oita wagyu, a series of dishes carefully prepared with a focus on ingredients harvested from the surrounding area and ocean, and Beppu’s signature pudding, steamed crème caramel. After dinner, my gracious host Nobuko Iwase showed me how to create an ikebana floral arrangement, and I was quietly chuffed that my efforts were deemed worthy of being displayed in the corridor. 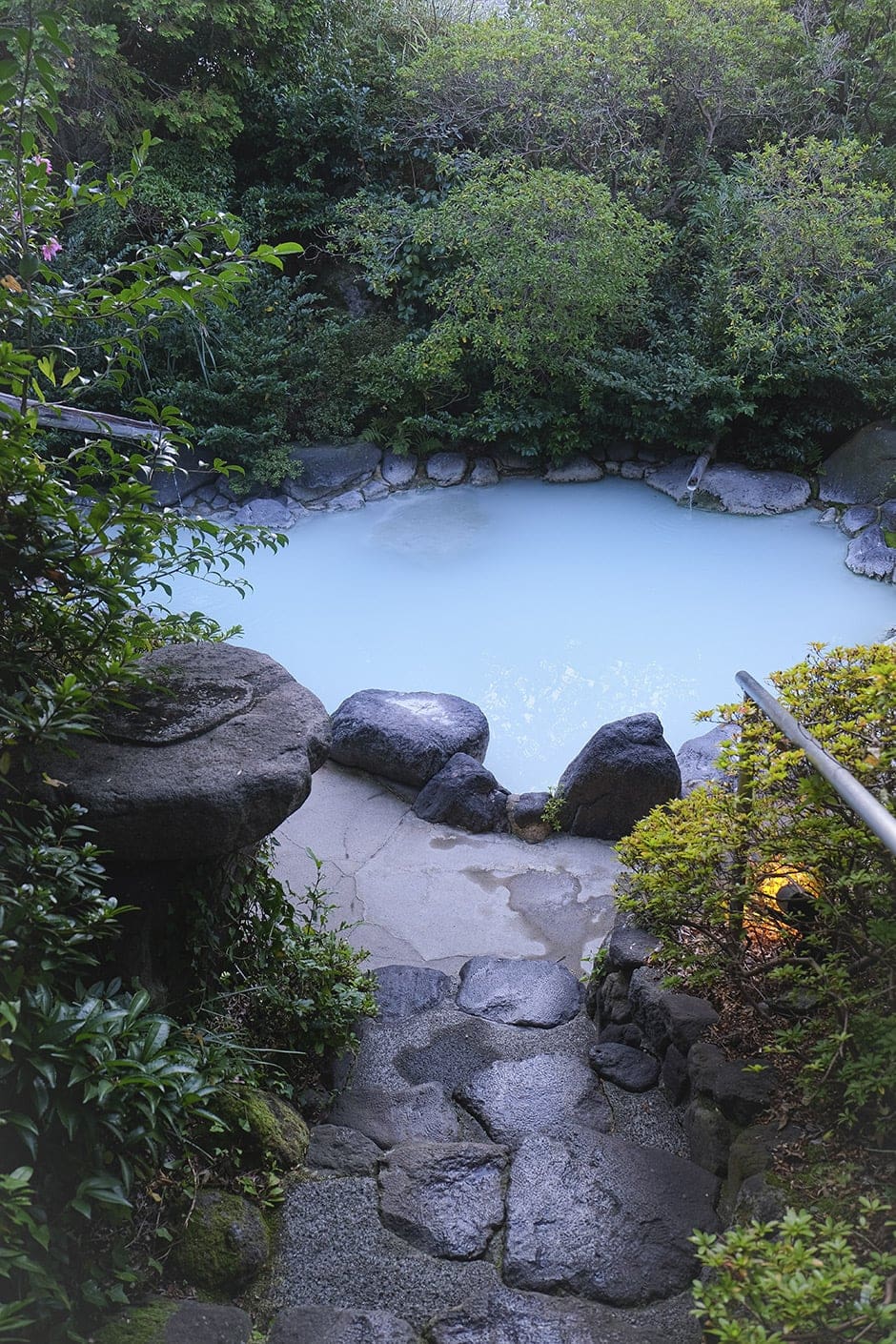 ABOVE At Beppu’s Okamotoya ryokan, you can don a yukata (robe) and head for the outdoor hot spring to steam under the stars. The communal bathing areas are separated by gender, and you’re all naked, all the time, but once you relinquish your modesty and embrace the concept of being in the buff, the whole experience is truly relaxing.

Having been treated to all sorts of local delicacies during my stay in Oita, I ended the week on a fun note with an okonomiyaki (savoury pancake) at Bari Bari. Falling into the category of ‘B-grade gourmet’, which is a thing in Japan, this mom-and-pop eatery epitomises the craft of comfort food and colloquial chat at an appealing price.

ABOVE The tranquil village of Yufuin is filled with galleries, craft shops, cafés and rustic ryokans. Japanese locals are known for their appreciation of mountains and there’s a building restriction here that ensures Mount Yufu’s twin peaks can be easily seen from any vantage point.

Sated, I returned to my hotel to repack my carry-on filled with carefully wrapped packages in preparation for an early-morning transit to Fukuoka Airport. The ceramics, bamboo wares and textiles I collected from the artisans’ studios I visited will forever be a reminder of the abundant culture Oita has to share.
Alice journeyed to Oita with Japanese travel experts jtboi.co.nz.

Other hidden gems in Oita

Otto e Sette, Beppu: The on-site restaurant at the aforementioned ryokan Yanagiya offers a unique twist on Italian cuisine using all local ingredients.
Hasshin Zushi, Beppu: The type of food experience I’ve had on my bucket list since watching Jiro Dreams of Sushi. Simple yet exquisite nigiri.
Jigoku Mushi Kobo, Beppu: Grab a ticket from the vending machine, pick up your ready-to steam ingredients and prepare your own meal in one of the outdoor ovens.
Spica, Beppu: A unique design store/gallery where a husband-and-wife duo curate a thoughtful edit of objects, art and fashion.
Sanshoro, Yufuin: A must for its lunchbox meals so delightfully presented, they’re a feast for the eyes as well.
Sansou Murata, Yufuin: The best of East and West combine at this high-end ryokan. The interior is super-cool, so even if you’re not staying the night, it’s well worth visiting for a drink in the bar.
Tamanoyu, Yufuin: This ryokan once provided lodging for zen Buddhist monks, and now you can enjoy the serenity in rooms dotted around a woodland garden.
Mount Yufu, Yufuin: Follow the lead of local hikers and make the four-hour ascent to the peak.
Suzunari Coffee, Usuki: If you’re after a real coffee fix, this café roasts their own beans and serves up a good brew.
Kitsuki Castle Town: Check out the old samurai houses, particularly Ohara residence right beside the Suya no Saka cobblestoned slope.