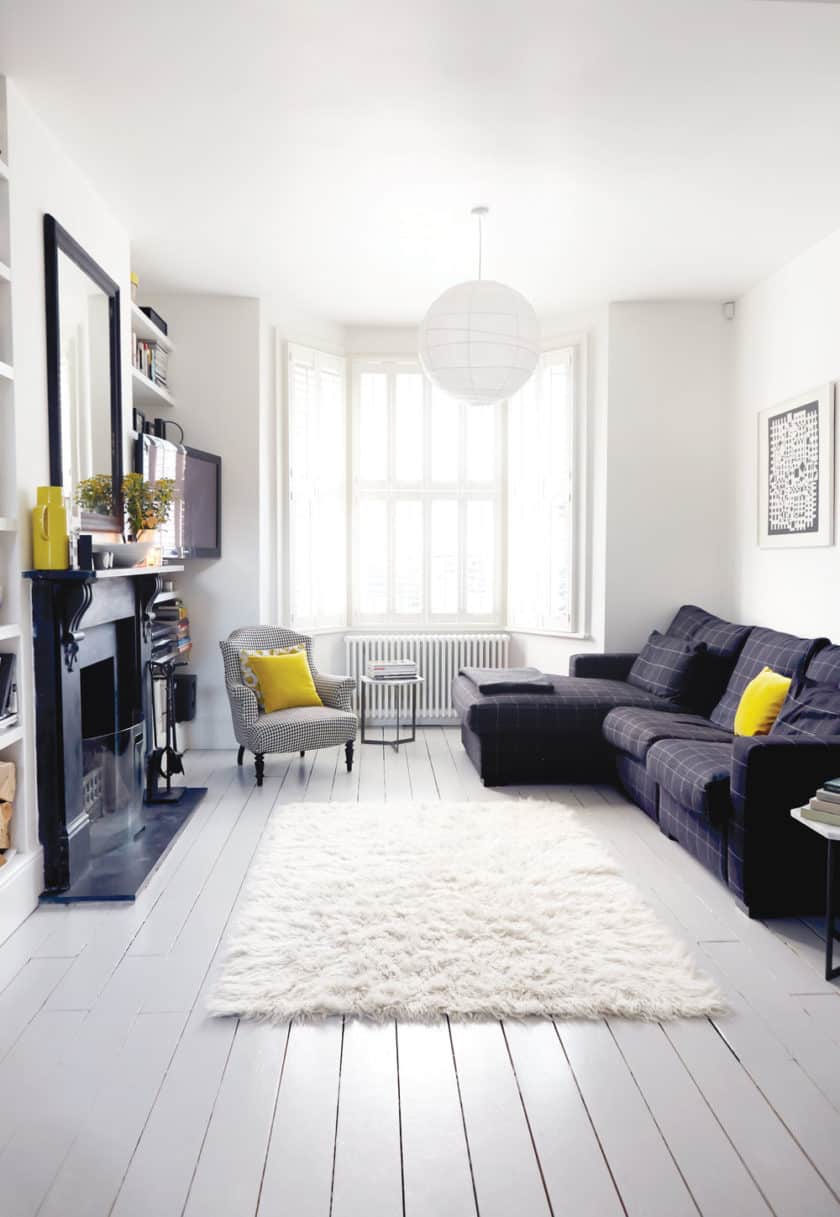 A dark maze of tiny rooms found down a pokey North London street has been transformed into an oasis that is white, bright and inviting.

London-based New Zealander Anna Fraser says it was her aversion to clutter that lead to an interior with lots of places to hide things. But the narrow, black-painted exterior of the end-of-terrace house she shares with her husband and three children hides something in itself – an airy, spacious, light-filled family home that seems quite incongruous in the pokey streets of Kensal Rise. There’s a hint of the wardrobe that leads to Narnia here in the way the front door opens to reveal a gleaming, white oasis of calm. However, this wasn’t always the case.

When purchased in 2011, the North West London home was a dark maze of tiny rooms and a backyard that Anna describes as “basically a parking spot for recycling bins”. But with the addition of a side-return (extending the house over the largely redundant outdoor pathway running from front to back), and a loft conversion, plus some ruthless culling of existing trees in the back garden, the house is now a five-bedroom family home with a view that could be mistaken for leafy parkland. “It’s one of the things I love most about it,” says Anna. “We had no idea we’d get this view of all the gardens beyond ours until we pulled all the existing trees out which were blocking the view and the sun. We did keep the pear tree though,” she says. “We felt like we had to keep something!”

Working with Kiwi builder Sam Cross, who now operates his business Cross Construction back home in the South Island, the Frasers set about turning the house into something “light, but durable”. Anna describes her childhood home as being filled with antiques and wanted something “less precious” for her young family. While she admits to being fussy about the white marble kitchen island, the home is otherwise somewhere the children can literally draw on the walls – a concealed sliding door which can be used to divide the kitchen and the living room is actually a huge blackboard wall for the kids to scribble on. Bikes and toys are kept hidden but handy in clever cupboards tucked into corners and under stairs, and a pleasingly large area of floor which could easily handle a full-sized dining table is kept clear for the kids to “do circles on their bikes”.

But despite these additions and the conscious decision to avoid sharp corners that might do harm to little heads, this is • still a sophisticated home. With a clean colour scheme of white, dark and pale grey, with the occasional splash of acid yellow or green via a cushion here and a plant there, the mood is crisp and clean, but not cold. Instead, warmth is added via Anna’s collection of large vintage pieces – sourced from the nearby Golborne Road (a street full of vintage furniture dealers, upcyclers and bric-a-brac peddlers) as well as out-of-town antique markets.

A huge slate fireplace found in a reclamation yard and painstakingly stripped of several layers of paint by Anna in the middle of winter was worth the effort, housing a cosy fire in winter which she gazes at while her husband watches TV. An old bookseller’s sign has been turned into a mirror and hung from the downstairs loo, and original radiators have been resurrected to fit with the colour scheme. An old car boot has been reclaimed as a unique storage solution, while allowances have been made for security, with modern safes hidden from view.

Anna confesses to feeling conflicted between the different styles she is drawn to when making decisions for interior finishings and furniture– from modern minimalist, to vintage-sourced and a streak of stark Scandinavian – but the end result is perfectly balanced. And it’s all hidden behind an unassuming door in North West London.