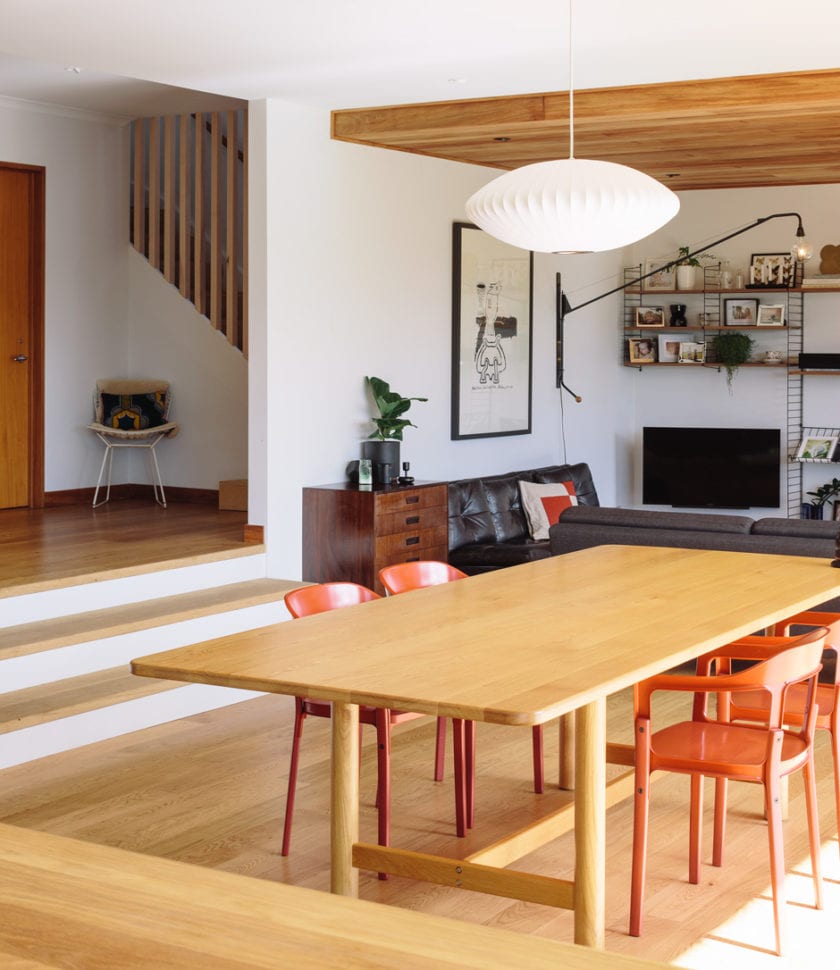 The owners of this impeccably refreshed North Shore home made it happen with a little help from their friends.

Alexandra Cunningham and Sam Brodie’s Auckland abode is so beautifully well-considered, it could practically be a showroom. Truth be told, the kitchen used to be. Sam’s sister Hannah Brodie and brother-in-law Sam Haughton own local kitchen and furniture company IMO and were happy to help, so they packed their chic showroom kitchen into a box, and after a few minor modifications, it was installed in its new home.
Actually, artists/designers Alexandra and Sam had the support of several skilled friends (and friends of friends) when it came to their home’s renovation – and even its acquisition. After seven years in London, they’d decided to return to New Zealand with their two children. An extended holiday in Asia on the way back turned out to be so relaxing, Alexandra got itchy feet, so she got busy house-hunting online. Finding this one in Bayswater, they sent Sam’s parents, family friends and a builder along to check it out, then with their seal of approval, decided to go for it. 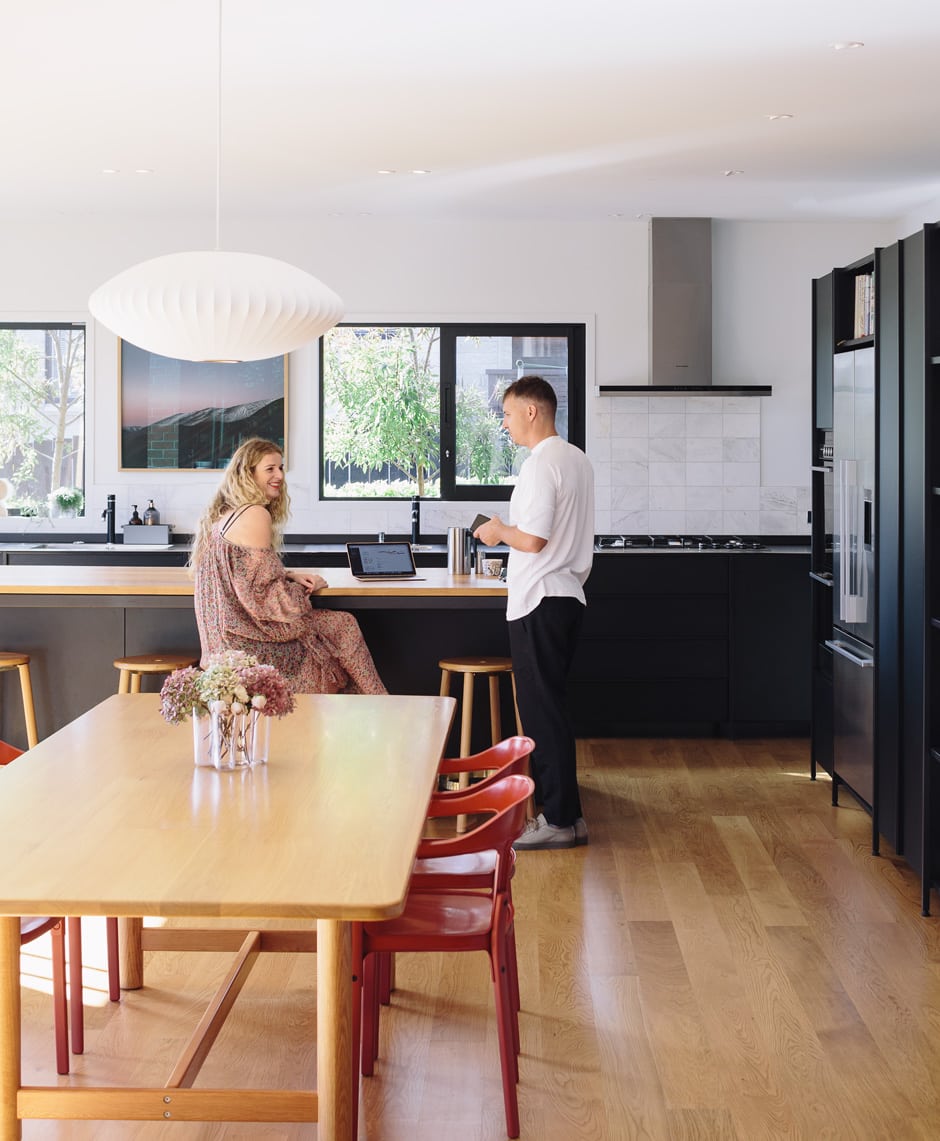 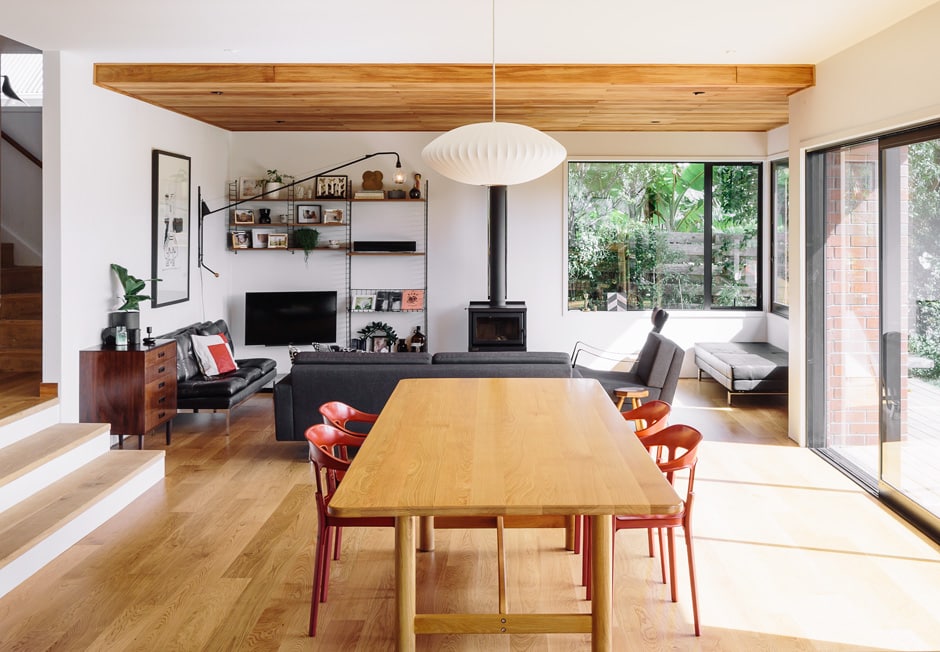 TOP The new kitchen is IMO’s KXN system. Formerly installed in the company’s showroom, it fit this space near perfectly – all the couple had to do was add a few extra bays and reduce the length of the island’s timber top. Says Alexandra: “It has massive preparation areas, so you can have several people cooking at once, and a high bench, which is great, because I’m quite tall.” ABOVE Equal parts homebodies and hosts, Alexandra and Sam enjoy catering for big groups. The huge kitchen island is essentially a second dining table, and there’s a third on the deck for use in summer. “It’s great for entertaining,” says Alexandra. “One Christmas, I cooked for about 25 people, and we had a big house party the other night. It’s really easy to have lots of people in here dancing, with food and drinks laid out on the island.” She says they positioned the kitchen so it opens into the living area “so people can be with you while you’re cooking. It was all about making the kitchen part of the overall experience of the house.”

Alexandra says arriving here “felt like coming home”. The ensuite off the guest bedroom downstairs was a pleasant surprise that wasn’t marked on the plans, as was the upstairs guest room, which had been labelled ‘attic’. “But what we really noticed was the green,” she recalls. “It had green carpet, green walls, green joinery, green trellises on the fence and gates…”
A renovation was definitely in order. A ’90s kid through and through, the house had been built by the previous owner, who was a builder by trade. It was structurally sound, “but some classic short-cuts and questionable architectural styling decisions had been made,” says Sam. “There were angles, curves and little windows everywhere, the living area was divided into three box-like rooms, and there were additional doors, and doors for doors, and then more doors. It was like standing in the middle of a maze and wondering what it would be like if we opened it all up.” 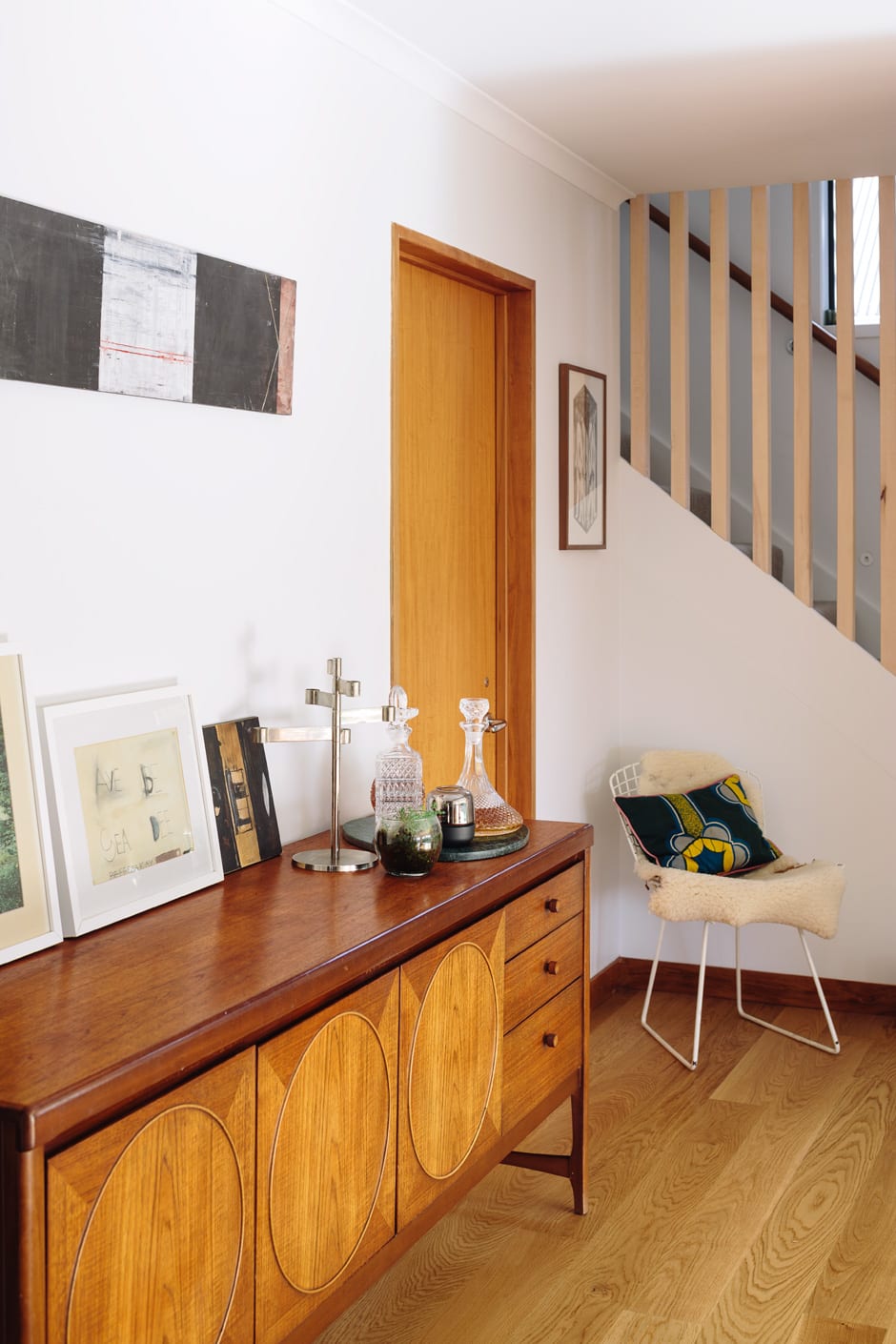 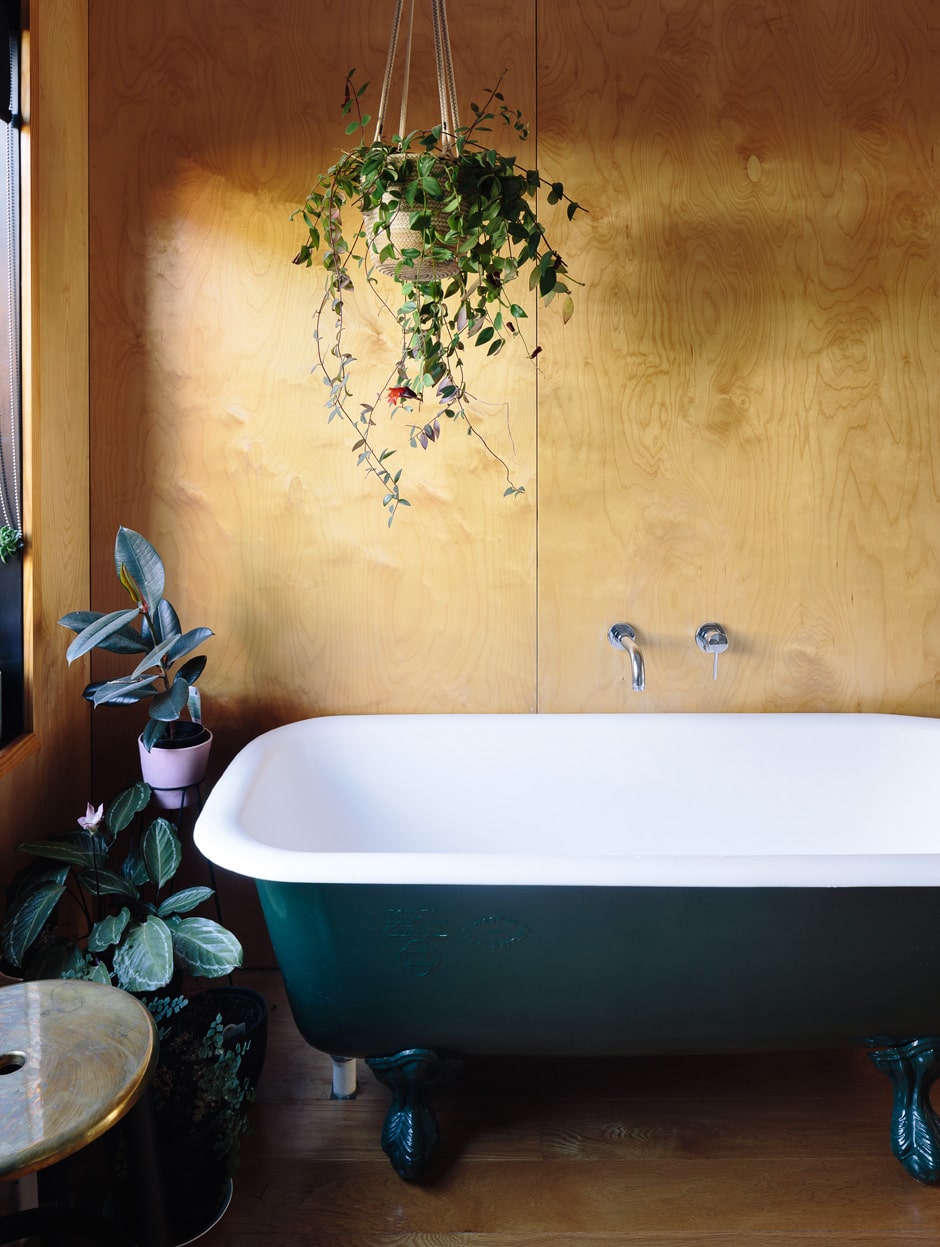 TOP Bought for a song from friends who wanted to get rid of it, the sideboard was such a score, says Alexandra. “It had a broken drawer knob, but we brought it home and screwed it back on and gave it all a polish. It looked so good. They came over not long afterwards and were like, ‘Oh my god, what?!’” ABOVE The forest-green claw-foot bath in the main bathroom is one of the only aspects of the original décor that remains. “This is one of my favourite rooms in the house,” says Alexandra. “It gets the best light in the afternoon.”

Living in the house throughout the four-year renovation, they worked from the outside in, landscaping first, then altering every room and some of the exterior cladding. “We kept the cute old claw-foot iron bath,” says Sam. “But other than that, it was just a nice, north-facing house with few redeeming features.”
Today, it’s so much more. With degrees from Elam and a previous renovation in London under their belt, the couple needed only to hire draftswoman/builder team Tracey and Clint Lockwood of Create & Construct to transform their ready-to-go vision into a set of plans and undertake the build. Both Alexandra and Sam are influenced by mid-century design and fans of a modern, clean aesthetic, so they kept the material palette simple: black and white, timber and stone, natural materials where possible. They chose white for the walls to create gallery-like spaces for their large collection of art, photos and furniture – but not just any old white. Again, a talented friend stepped in, painting an entire wall in a grid of hues to find the perfect fit (Dulux Manorburn Half), with the right amount of blue and grey to absorb and reflect light, yet still feel warm. 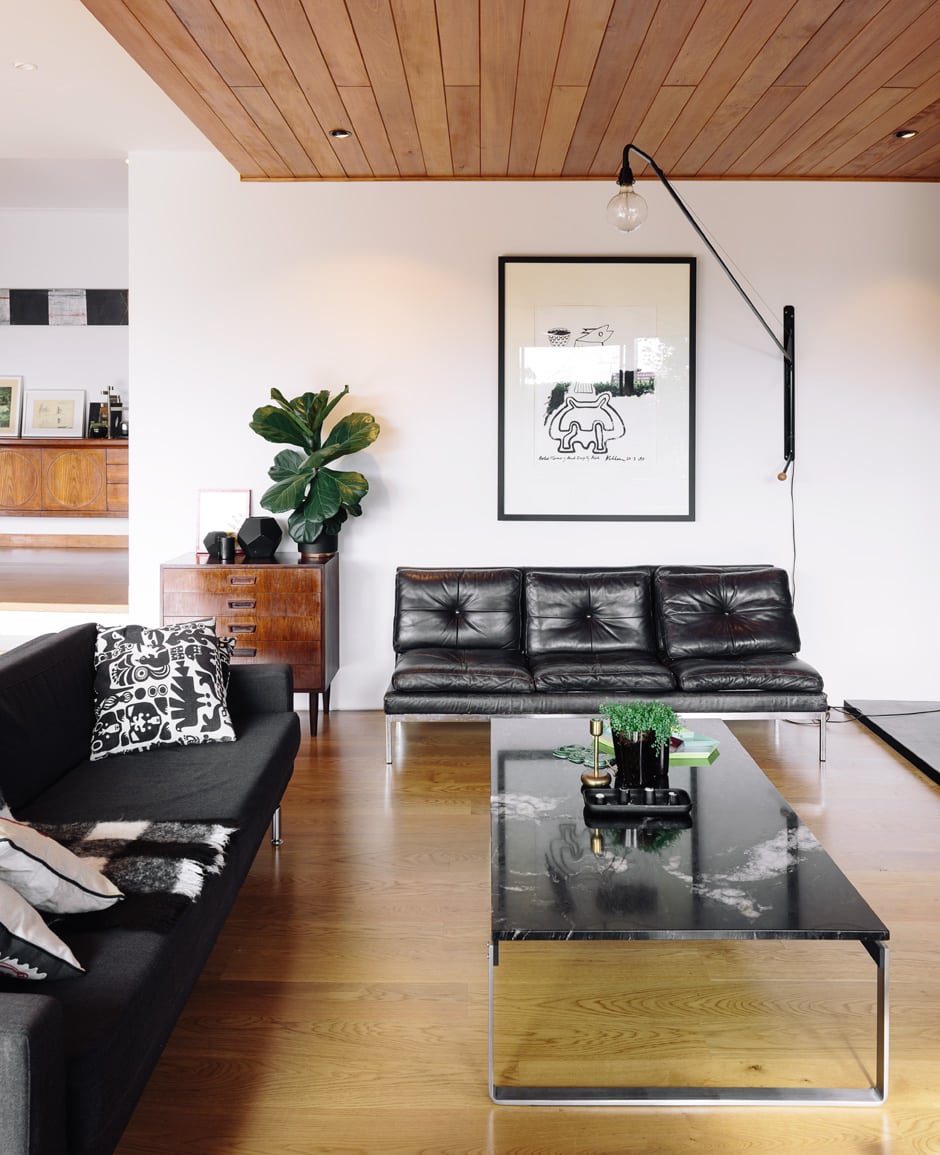 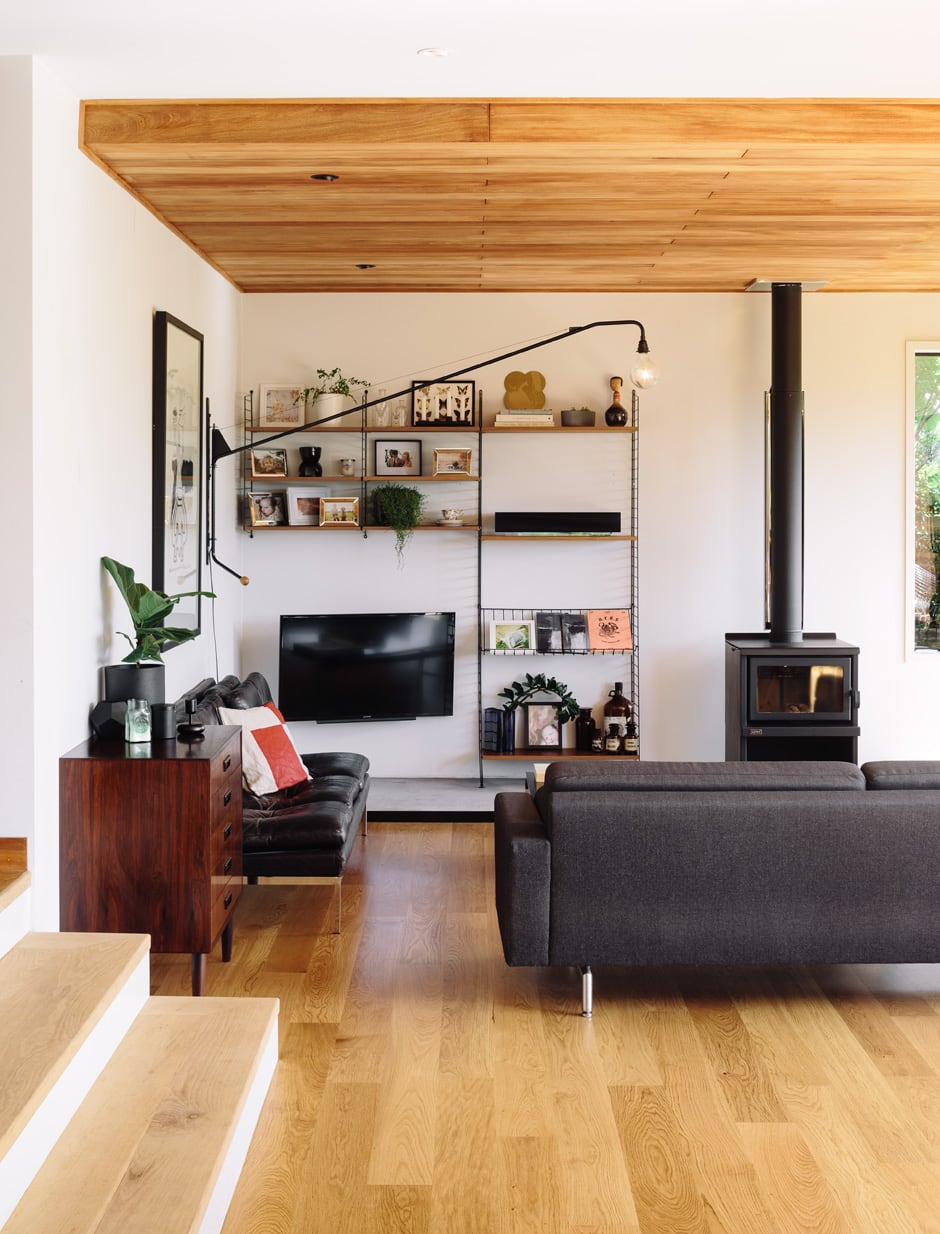 TOP The ceiling in the lounge is made from the Fijian timber salusalu, which is similar to rimu but more cost-effective. “It makes this space feel snug and well-defined,” says Alexandra. Above the vintage sofa the couple bought in Antwerp is a 1950 Potence wall light by Jean Prouvé for Vitra, which illuminates an artwork by Richard Killeen, Pooled Memory and Empty Fish. ABOVE Sam has a designer-furniture obsession. “I’ve been collecting furniture and art for 20 years. Lots of vintage, lots of end- of-year sales at showrooms in London, and Alexandra and I used to drive to Belgium and fill our car with finds from there. My sister, brother-in-law and I are designing a few bespoke pieces too, including a window/bench seat that’s slowly coming to fruition.”

“I’m all about pulling in the best of what other people have invested their time and energy into,” says Sam. “We have friends who know what they’re doing, and a lot of our art and furniture is designed and made by me, Alexandra and our family. Hannah and Sam have great taste, so we’re always eager to test new products for IMO; the whole house is full of prototypes, from the kitchen prototype, to the bathroom prototype, and we’ll have the bench-seat prototype in the lounge soon. I’m also shameless about meeting people, learning they work for a design company and asking for the thing I love with a staff discount!” 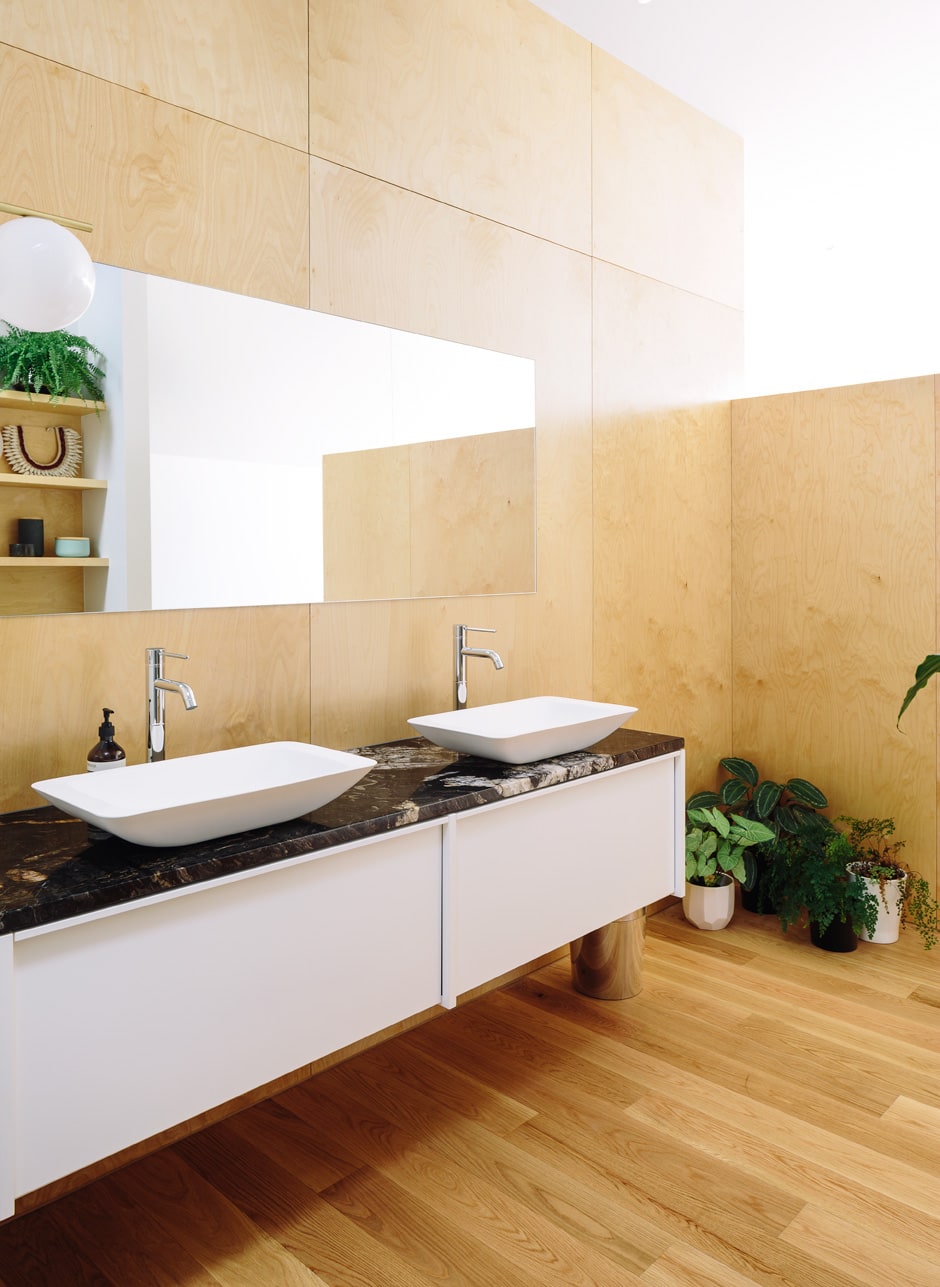 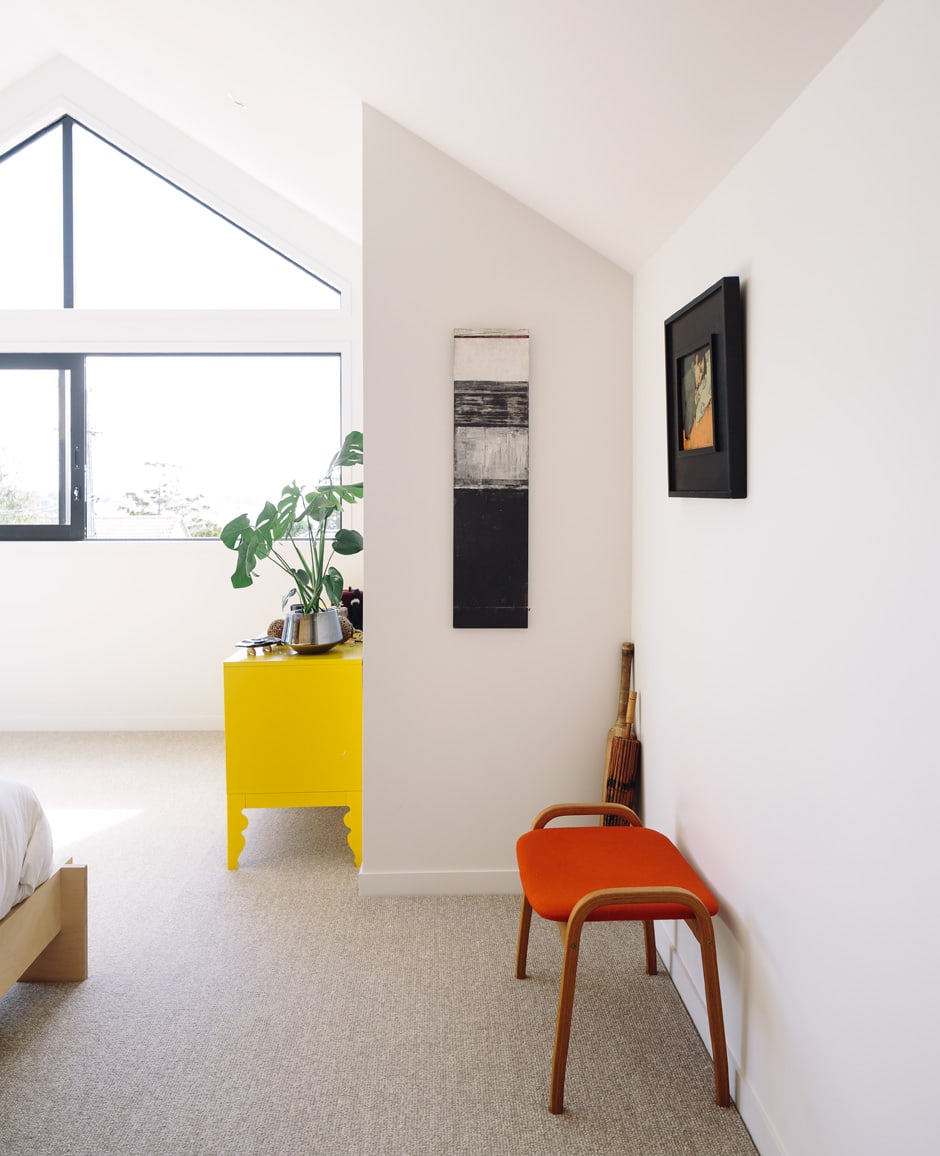 TOP Previously accessed by not one but three doors, the newly simplified high-ceilinged ensuite bathes in the glow from the skylight overhead and the tall windows in the master bedroom beyond the birch-ply half wall. Basins by Metrix sit on a slab of marble the couple bought from Granite Pacifica in Kumeu. The cabinets are IMO’s BXN system. ABOVE Where once was an angled door to a gloomy master bedroom blocked from the sun by a sunroom, there’s now a high bank of windows through which rays stream into an uncomplicated but luxurious sleep space. “I love our bedroom,” says Alexandra. “It’s so private we don’t need curtains, and we even get ‘sea glimpses’, as we call them!” The mustard sideboard seen here is an old favourite from Ikea. “It’s one of the first pieces Sam and I bought together when we moved to London,” says Alexandra. “It’s kind of ugly, but we like it because it’s so ridiculous and different to anything else we own.” The red Lamino stool is by Yngve Ekström, the bed is by Nils Holger Moormann and the artworks are by Sam (left) and Malcolm Liepke.

Other special connections made during the journey confirmed what the pair knew from the start: that they’ve come to the right place. “One of the occupants of the home that was here before ours ended up buying some old joinery we sold on Trade Me,” says Alexandra. “Then we discovered the family who built this home were the in-laws of a former colleague, and that a good friend used to date someone who lived here.”
“I think our house is a reflection of the company we keep,” says Sam. “That’s what sets it apart. We designed it all ourselves with no professional help, but we’re surrounded by professionals. We’re lucky.”