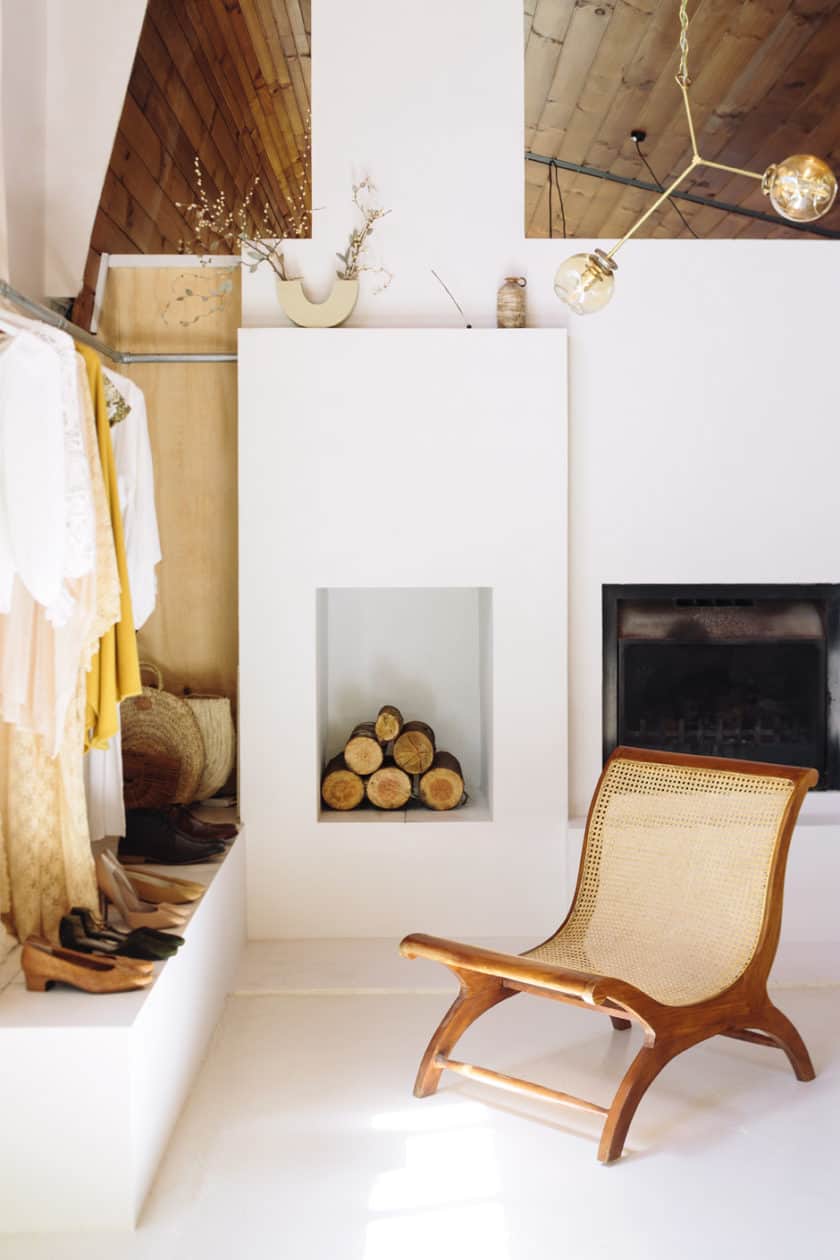 The owners of this Hamilton home thought a total renovation was in order – then it really started to grow on them.

Entering the home of Erena and Joe Te Paa, it’s impossible not to be captivated by the high stud and curved timber ceiling that runs the length of the open-plan kitchen and living area – rows of honey-coloured boards rising to a peak before rolling like a wave towards the wall. The dramatic ceiling is a feature of the home’s mid-century modernist architectural style and was key to the couple’s purchase.
“I was instantly drawn in by its uniqueness,” says Erena. “Homes of this era have a quirkiness about them. In some ways they were ahead of their time, given that a lot of modern architecture and furniture design now harks back to this look.”
Designed by Hamilton architect Rodney Smith in 1968, the house began its life as a four-bedroom dwelling, then was added to during the years he and his family lived in it. When Erena and Joe discovered the property two years ago, it was in a state of extreme disrepair. “In more recent times, it had been a government-owned boarding hostel,” says Erena. “When we bought it, it was unloved and run-down, with green carpet, orange and yellow walls, and lots of dings, dents and holes.”
Luckily, key architectural details such as the ceiling and a three-quarter wall with built-in fireplace had survived, and Erena and Joe were excited about its potential. They already had one renovation behind them, a 1960s brick house they’d completed largely on their own over a period of four years. 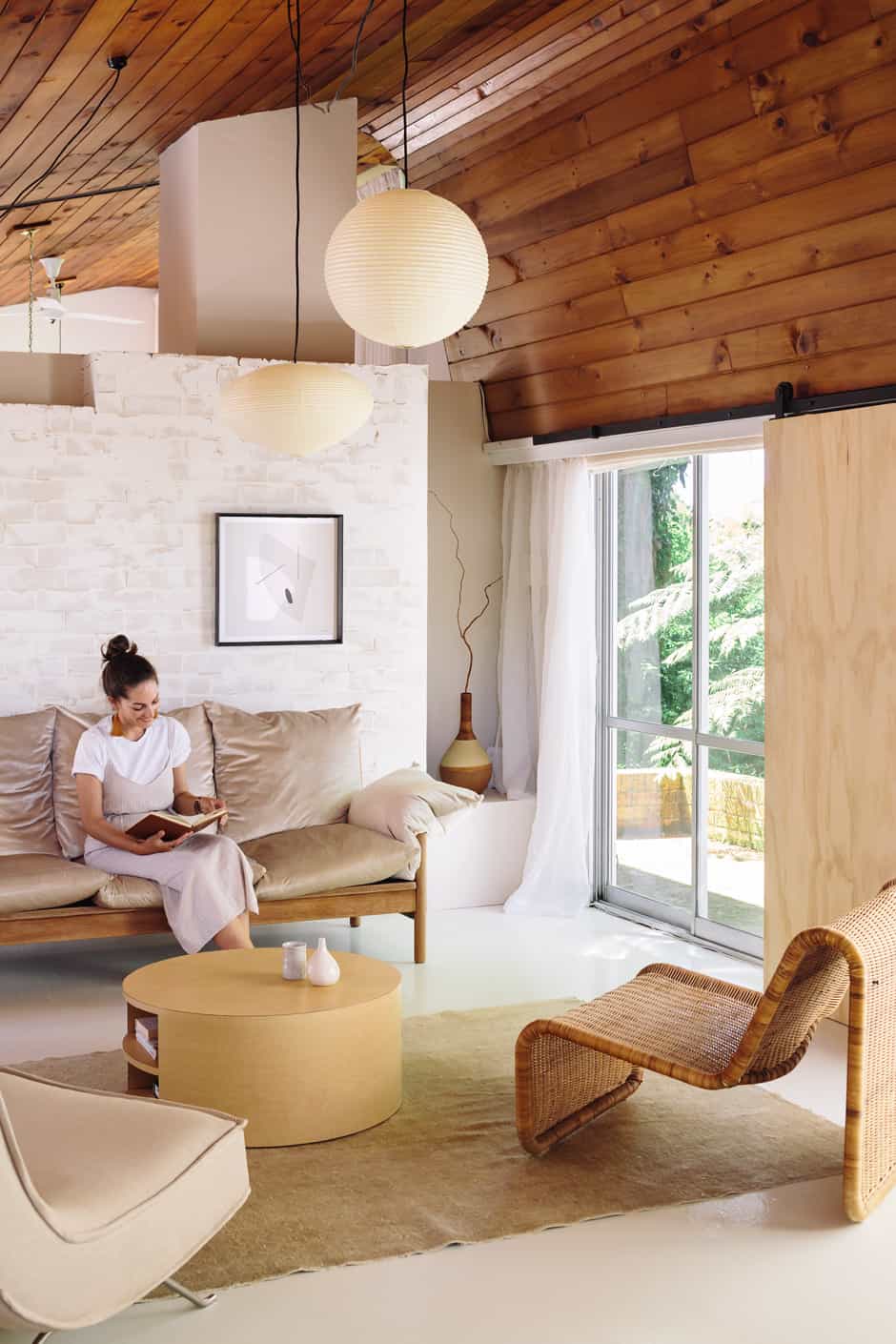 LIVING “I scored the couch for $10 on Trade Me,” says Erena. “We kept the frame, then put time and money into stripping it back and reupholstering it in beige velvet.”

“From that experience, we learned what we were capable of, and that living in a home for a while before you can afford to change it is actually a blessing in disguise,” says Erena. “We had to do the same with this house, and now some of the original features that I disliked when we moved in are some of my favourite things – I’d never want to change them.”
A larger renovation is on the cards as time and money allows, and plans have already been drawn up. In the meantime, phase one has focused on revitalising the kitchen and living area, getting rid of unwanted carpet and other fittings, and updating the original features, a process Erena describes as “more of a makeover”. With the assistance of Joe’s dad Charles, a “master handyman”, they’re tackling this stage themselves. (They’re also in the process of having a guesthouse built, to rent out.)
The single-level, cedar-clad house was designed by Rodney as two separate wings, one for living and the other for sleeping, with the entry and a courtyard in between. At the end of a long driveway, with a tree-filled gully on two sides, it’s a tranquil oasis in a busy suburb a couple of blocks from the Waikato River. 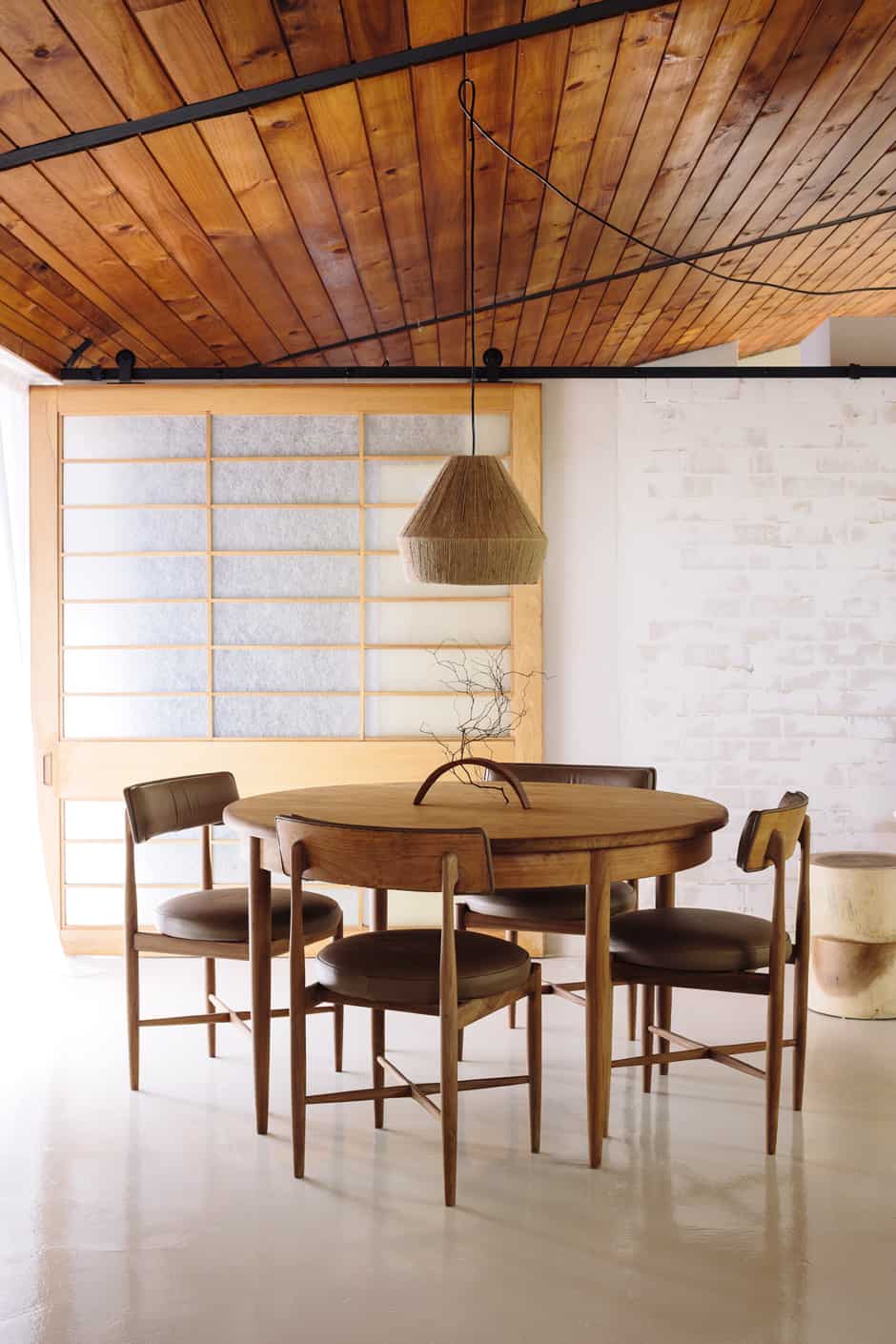 DINING The Shoji-screen door that separates the living area from the new master bedroom was another lucky Trade Me buy from a homeowner in Christchurch. “I wouldn’t usually look that far afield due to freight costs, but the house it came from looked very similar to ours, so I thought there was a good chance it would work,” says Erena. On the table, a dried arrangement is displayed in a candleholder from Instagram store @blackbirdpreloved.

Inside, the combination of subtle colours and textures is clearly the work of a skilled stylist. The walls in the living areas are painted in Resene Black White and the concrete floors in Resene Eighth Joss. The three-quarter wall dividing this space is exposed brick Erena softened with a dabbed-on paint and plaster effect. “My colour palette is very much earthy neutrals with the odd pop of colour,” she says. “There’s a soothing, grounding quality to these colours, which is really nice to bring into a home to help to calm the stresses of everyday life.”
Erena describes her style influences as “a blend of Japanese, Scandi and Italian. I think our house lends itself to these styles too, which is probably why I love it so much.”
She pairs mid-century modern pieces with second-hand finds that she often transforms with the help of local upholsterer Jannine Hodgson of Nene’s Upholstery. “I love how much personality and uniqueness they bring to a home, and I’ll always be attracted to the thrill of the find,” says Erena. 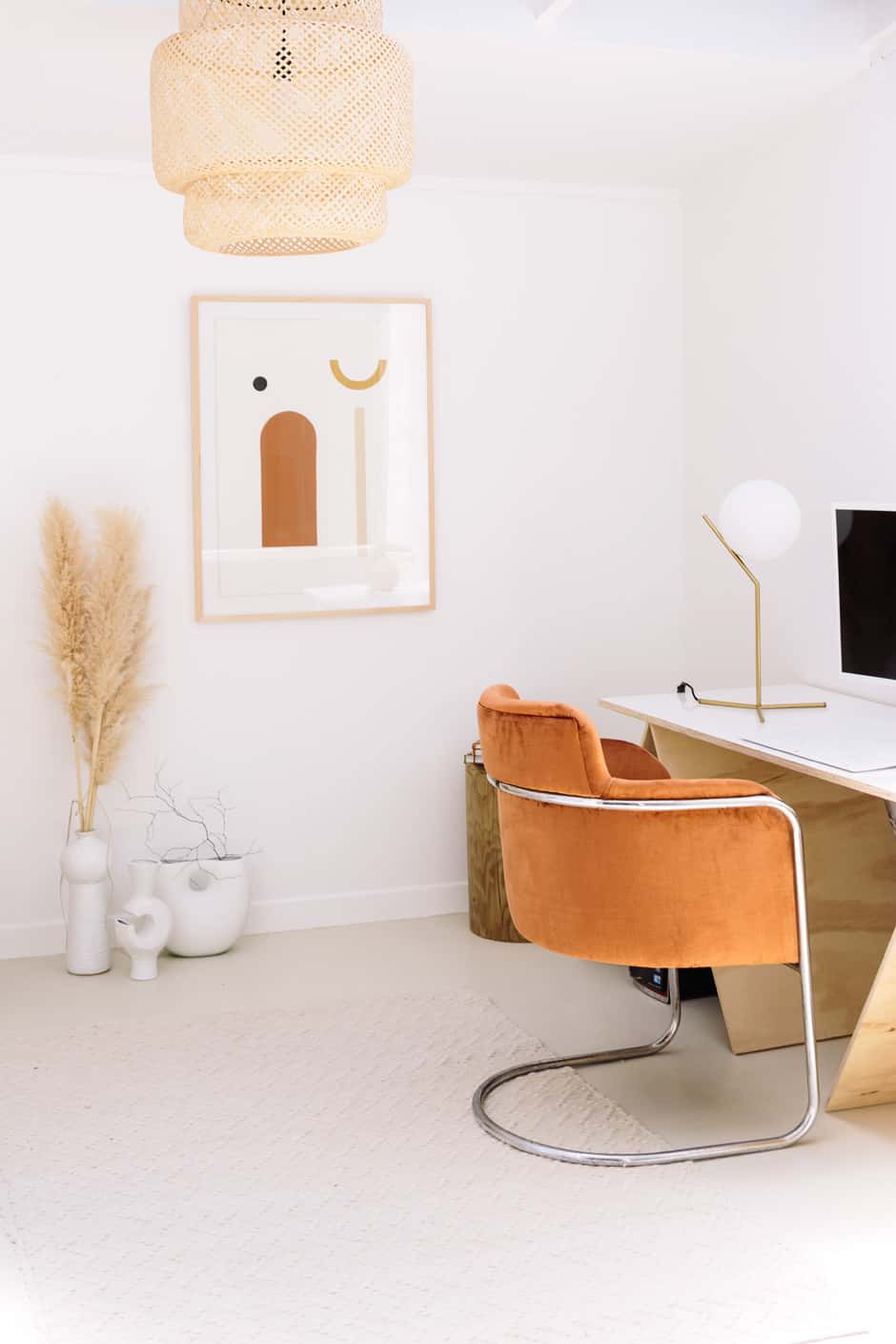 OFFICE In the office, a chair from Retro Addiction has been re-covered in an easy-clean microfibre velvet. Its tonal teammates include a Sinnerlig pendant light from Ikea, a lamp spotted on eBay and an artwork by Bobby Clark, which Erena says is her “pride and joy”. The floor here is in the slightly lighter Resene Quarter Parchment.

The 60s G-Plan dining suite is a case in point. Erena discovered it on Trade Me filed under a strange category with hard-to-identify pictures, but she knew it was a design classic, so she stripped back the varnish and had the chairs reupholstered in soft brown leather.
This confidence to experiment has seen the couple relocate the master bedroom into the living-area wing of the house for the duration of the renovation, into the space that was the lounge. With freshly painted walls, including one housing an original built-in fireplace, and windows screened with floor-to-ceiling linen curtains, it’s a lovely romantic retreat.
For Erena, the biggest surprise to date has been realising “how much of the place we love as it is, when initially we thought we’d be changing quite a bit of it. We now intend to work with these features and retain as much of them as possible – but perhaps still put our own spin on them.”