Life as we know it 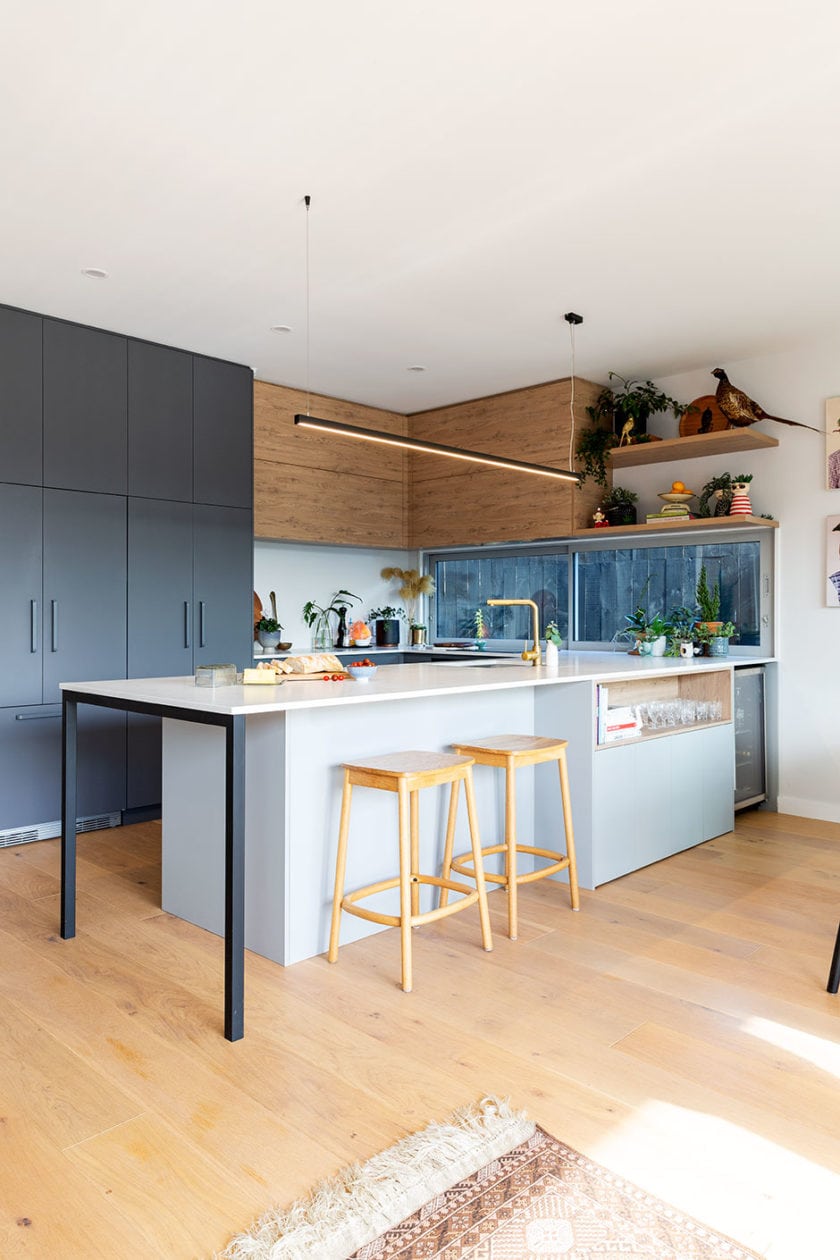 Never mind a few years living in a handful of rooms when the upshot fits your family like a glove.

Steph Headland says living with her husband Matt and their children Georgia and Harri in just a few tired rooms of their Mt Eden, Auckland villa while its renovation went on around them was the ultimate inspiration for creating the perfect ‘non-precious’ family home. “We felt like we were flatting here and that was actually quite nice. When you’ve got threadbare carpet, you’re just like, ‘Whatever — bring your bikes in, wear your dirty shoes, eat wherever you want.’ You don’t care so much, which is quite a nice way to live.”

ABOVE An op-shop map and a peek of green in the entryway hint at two of Steph and Matt’s passions — travel and gardening.

When it came to upgrading the front of the house, the couple tried very hard not to design it so they had to be too concerned about anything, because they wanted to really live here and enjoy it. “And for all my naughty friends to come round for lots of parties and have a good time without worrying about spilling anything on the floor,” adds Steph. 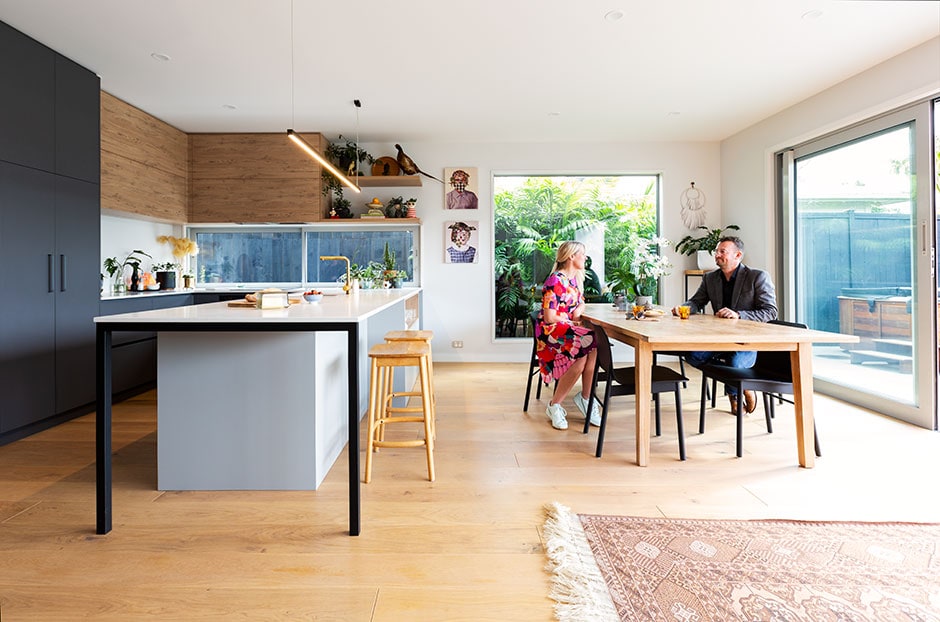 ABOVE Aiming to create a large entertainers’ kitchen connected to the living areas and garden, the couple put functionality first and didn’t scrimp on Blum hardware to ensure it would stand the test of time. Their Athena honed Prime Stone benchtop is set against French oak cabinetry in a Wilderness finish and dark Minx panels, all from Prime Panels, and light grey Melteca in Fog. The Ledlux Strix strip pendant is from Lighting Direct, the brass Buddy tapware is from Plumbline and the bar stools are from Città.

Throughout the project, the family lived in the older part of the house, cooking in a makeshift kitchen/laundry they created in a spare room and eating dinner on the front porch every night during summer. The children camped out in one bedroom, and the master bedroom’s ensuite became the temporary family bathroom.

ABOVE A gallery wall and a sideboard bought long ago provide a place for display in the hallway. “We’ve collected lots of treasures on our travels and inherited some from family,” says Steph. “When we unpacked it all and found it fit perfectly, it was such a lovely feeling — this is ours.” This pot plant is housed in an upcycled planter that was once Steph’s late grandmother’s.

“We put up a big bit of plywood at the end of the hallway and everything happened on the other side,” says Steph. “It was like living in a game of Tetris — every time you needed to move something, you had to move something else, but we were happy to be able to live on site. I enjoyed being here; I enjoyed the company of the builders and the plumbers, and seeing it evolve in front of us.”

ABOVE A table and chairs from Città fill out the dining area, which also includes artwork, a pedestal and a tribal pendant brought back after a trip to Bali. Standing to attention is a taxidermied pheasant that was a gift from Steph’s father. The palms outside are uplit at night. “It’s magical,” says Steph.

Phase one was a makeover of the original part of the house to get the heritage villa up to scratch. More than 100 years old, it had “freaky, almost furry” wallpaper, threadbare carpets and cloth wiring, but also beautiful pressed-steel ceilings the couple resolved to keep intact and one of three original fireplaces. “So we didn’t move any walls, we just painted, carpeted and curtained,” says Steph.
Next came the renovation and new build at the back of the house, the layout of which came from plans Steph masterminded herself. Anna Morton of Gather Studio helped design the kitchen and bathroom, and assisted with the interior design.

ABOVE You can curl up like a cat in the sun on this window seat softened with a cushion and sheepskin from A&C Homestore and a bolster from Città. Beside it are chairs from Indie Home Collective. The flooring here and throughout the home is Hydrawood Elite Oak.

“I lay awake for hours on end, for years on end, deliberating over it all and measuring up every single inch to make sure everything would work,” says Steph. “I also spent thousands of hours on Pinterest. I remember one builder we met with talking about the process and how at some stage you get to a point where you feel totally confident to go ahead. It seemed like I’d never feel like that — and then one day I did!

ABOVE Steph custom-designed this shelving to accommodate favourite things including awards and records, and other pieces inherited from her grandma. “It’s built to showcase our history,” she says. The cushions on the Gus sofa from Dawson & Co are from Città, A&C Homestore and Father Rabbit.

“We went through so many different plans, and made so many decisions and tweaks along the way, and then suddenly we got to a place that felt right. But I was always prepared to take the time we needed to get what we wanted.”
The dilapidated lean-to at the back of the house was pulled off and in its place came the new part of the home, which Steph describes as a relaxed, modern space with a bit of a resort feel. “We went for lots of lovely natural materials and colours, and it’s got massive sliding doors and a big picture window I’ve planted bamboo palms beside, to bring the outside in.”

ABOVE With a pressed-steel ceiling overhead, this second living space has been cocooned in Atlantic paint from Porter’s Paints, then coloured up with Marimekko fabric Steph had stretched over a canvas, and cushions including blue and white and dusty pink ones from Città.

The home’s new aluminium joinery was installed by Nebulite Auckland, owned by Matt’s parents David and Annette. “David thinks the stacker doors and picture window are some of the biggest he’s put in anywhere,” says Steph.

ABOVE Key décor details in the master bedroom include a Kip & Co wall hanging from Collected; Euro pillowcases, velvet cushions and a matching throw from Città; a Hydrangea cushion by Thread Design and a striped throw from Father Rabbit.

The Headlands’ vision was always to play on the different aesthetics between the old and new parts of their home. “We weren’t trying to make the extension be in keeping with the villa when you step through — that’s why we’ve got wooden sash windows and aluminium joinery,” says Steph.
It might have taken six years of ‘flatting’ together, but the experience bought the family time and gave them the inspiration to create the forever home they’d been searching for when they found the house. “I don’t think we were out looking for a do-up, but I love it because it fits us and the way we live,” says Steph. “There’s nothing I’d change — it feels exactly how it should.”

PreviousThis is how we do it