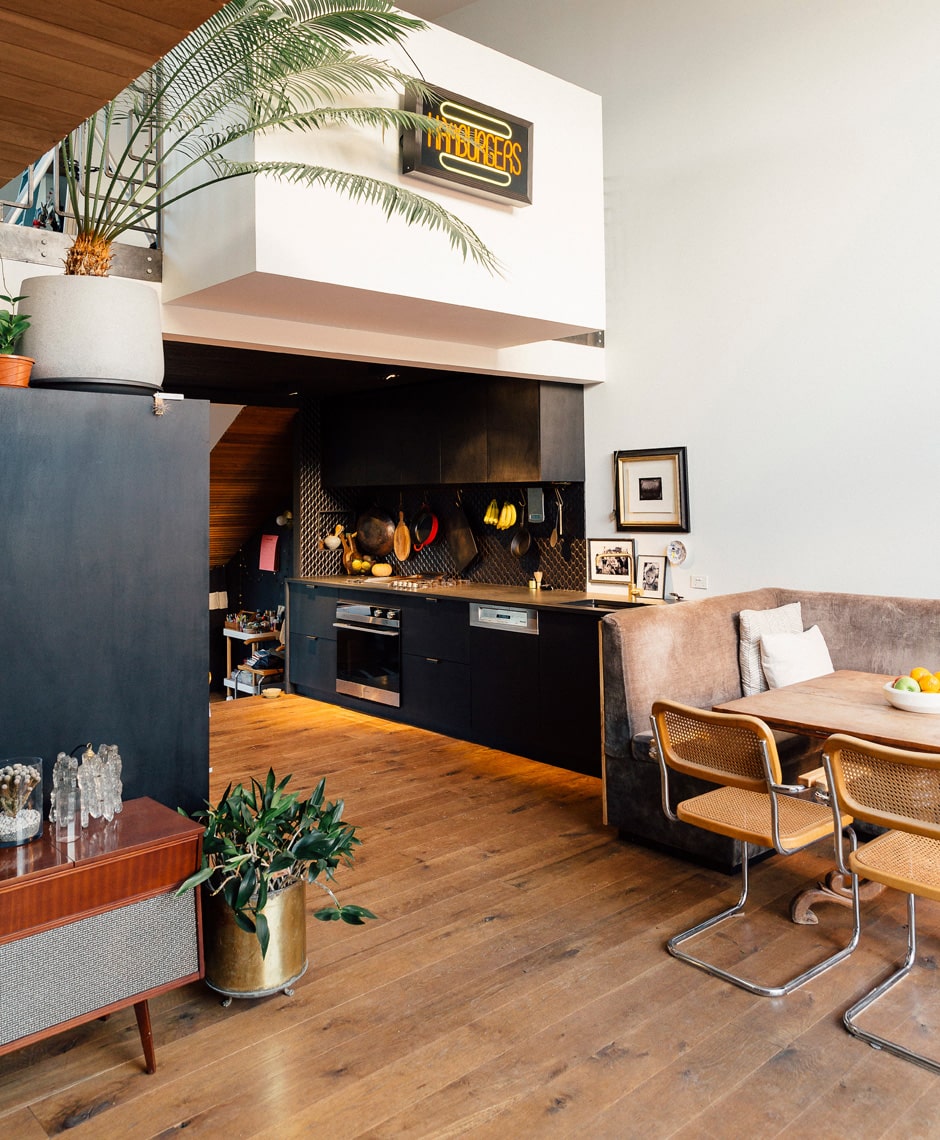 An absolute gem masquerading as an unremarkable unit is polished until it shines.

Semi-detached units are seldom thought of as sexy. Rather like marketing a mild-mannered, middle-aged bloke, real estate firms promote them as ‘solid and dependable’. When Sandii McDonald and Jared Reynolds saw this property in the Auckland suburb of St Heliers, a classic two-bedroom unit with a carport, they immediately put in an offer, then set about transforming it.
With some parts yellow-brick veneer, others weatherboard, a few fibre-cement panels and timber-framed windows, it was a smorgasbord of ’60s materials. Squeezed in between a five-storey apartment building, a Tudor-style villa and an ’80s plaster home, the 70m2 dwelling looked dinky in the domestic landscape. “But we really liked the area, it was within our budget and we thought, ‘We can do something with this,’” says Sandii. 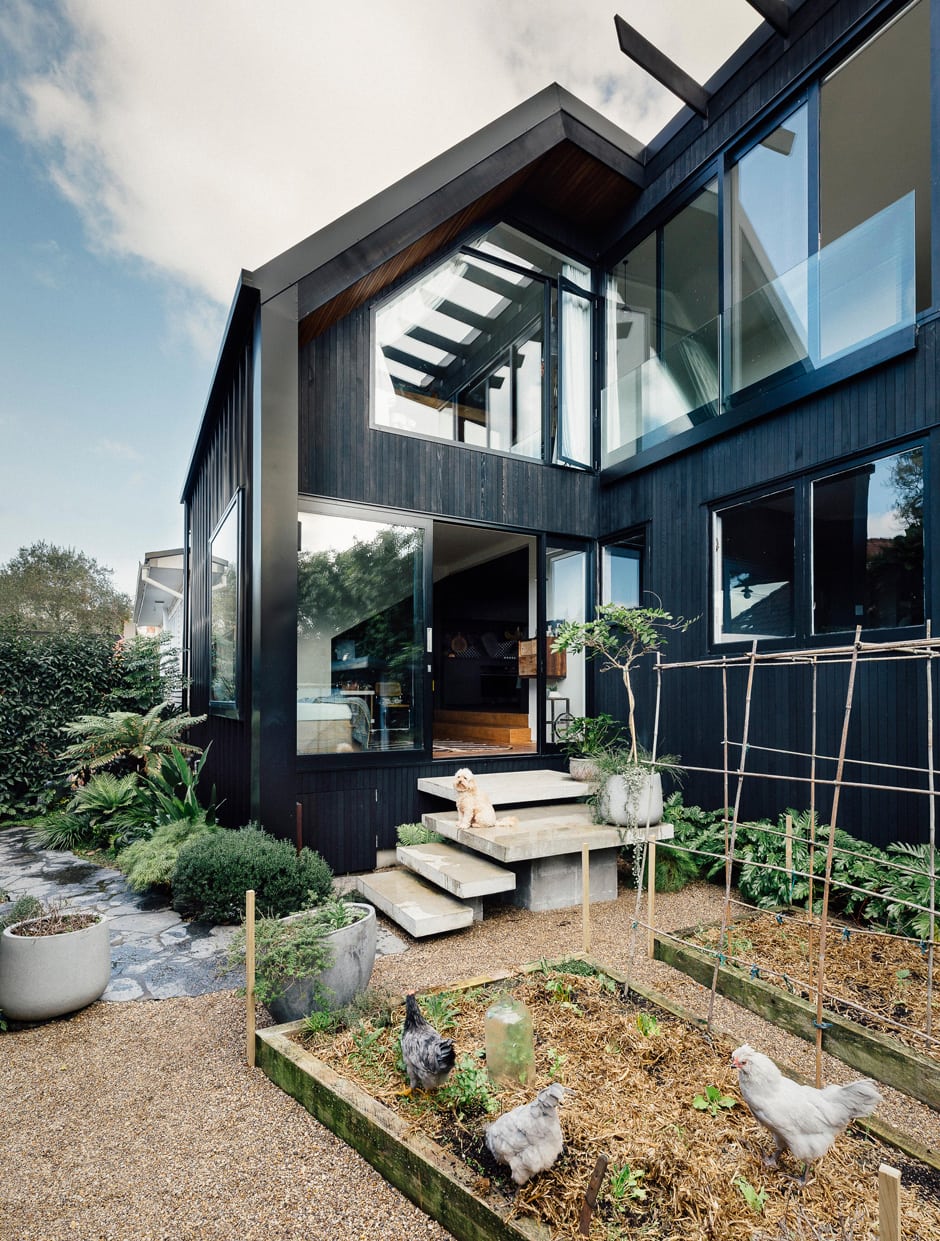 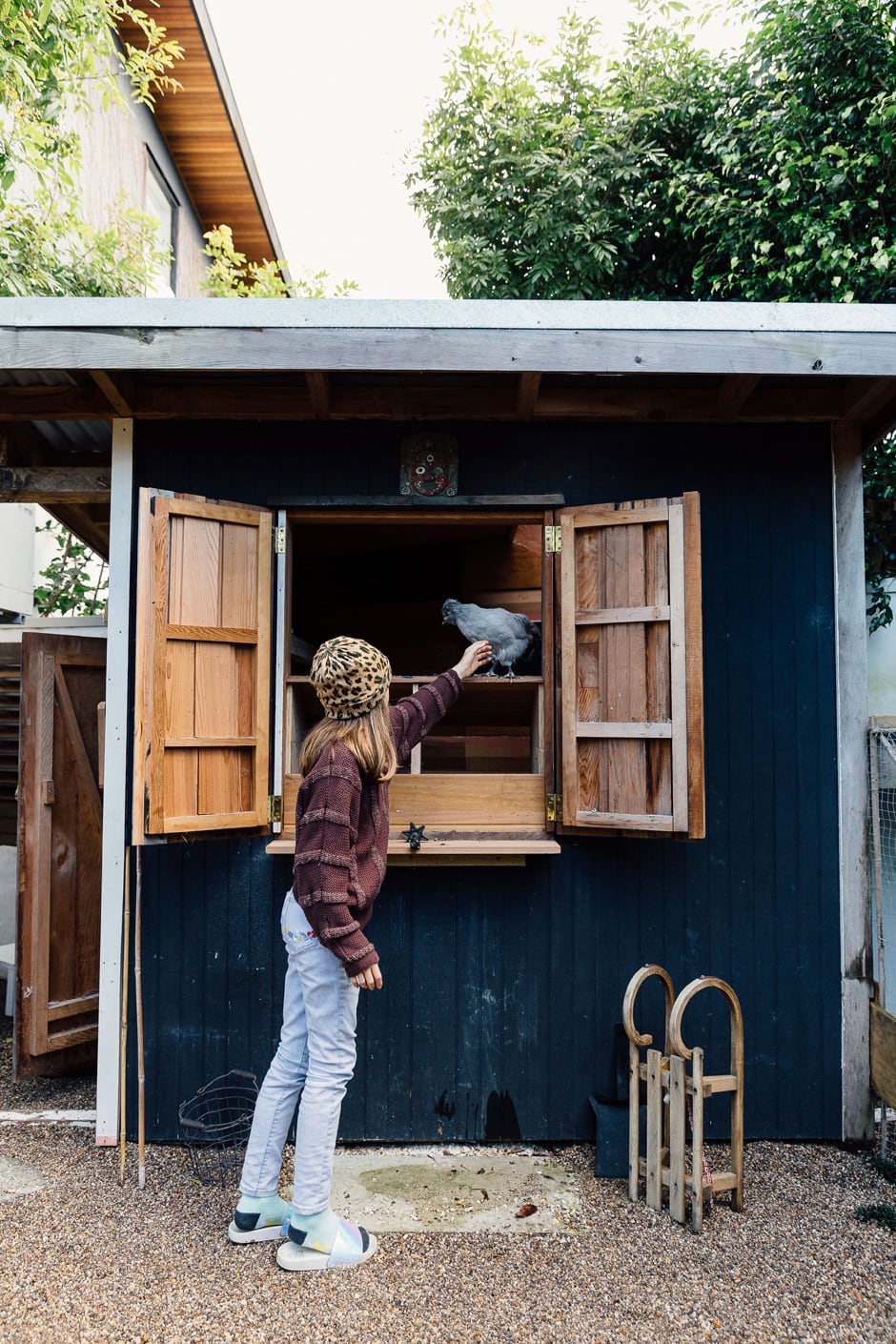 TOP The former driveway is now a garden with raised vegetable beds that the chooks raid whenever they get the chance. ABOVE The old playhouse has been turned into a home for some lavender Araucana chickens. Mercedes has given all but one of them feminist names: Helen Clark, Cleopatra, Frida Kahlo and Amelia Earhart. Nigel is the exception.

Architect Dion Gosling of Studio 106 thought so too. “They have the ability to pick up gems,” he says of the couple, who’ve renovated units before. As landscape designers, they also bring a discerning style and practical skills to the mix, and have turned this humble jumble of a home into one that packs a whole lot of living into its sliver of suburbia. 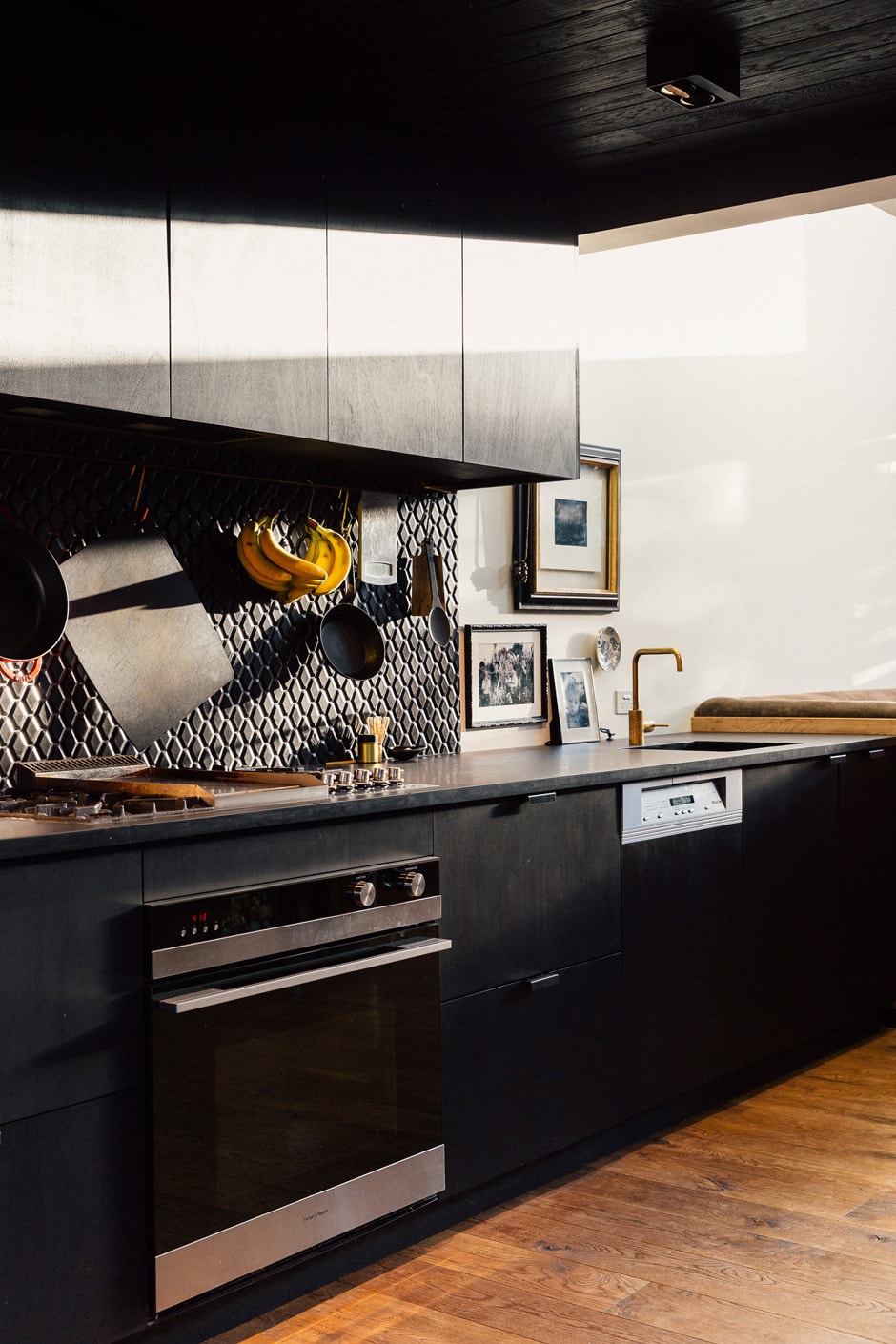 ABOVE Black plywood and steel handles bring drama to the kitchen, which is a thoroughfare between the dining zone and the second living area. The benchtop is Brazilian slate from Artedomus and the quilted-look splashback is from Tile Space.

The basic idea was to pull down and push up. Some internal walls were removed, the gable roof was lifted and an upper level was added. It sounds simple, but it wasn’t. With nine neighbours who could potentially have a problem with it, they designed within the existing site controls so as not to require resource consent. This necessitated some innovative thinking.
A wrap of vertical black weatherboards on the extension now accentuates the building’s upward orientation. It climbs seamlessly up into a roof of trough-section steel, which is angled to fall within the height-to-boundary restriction. 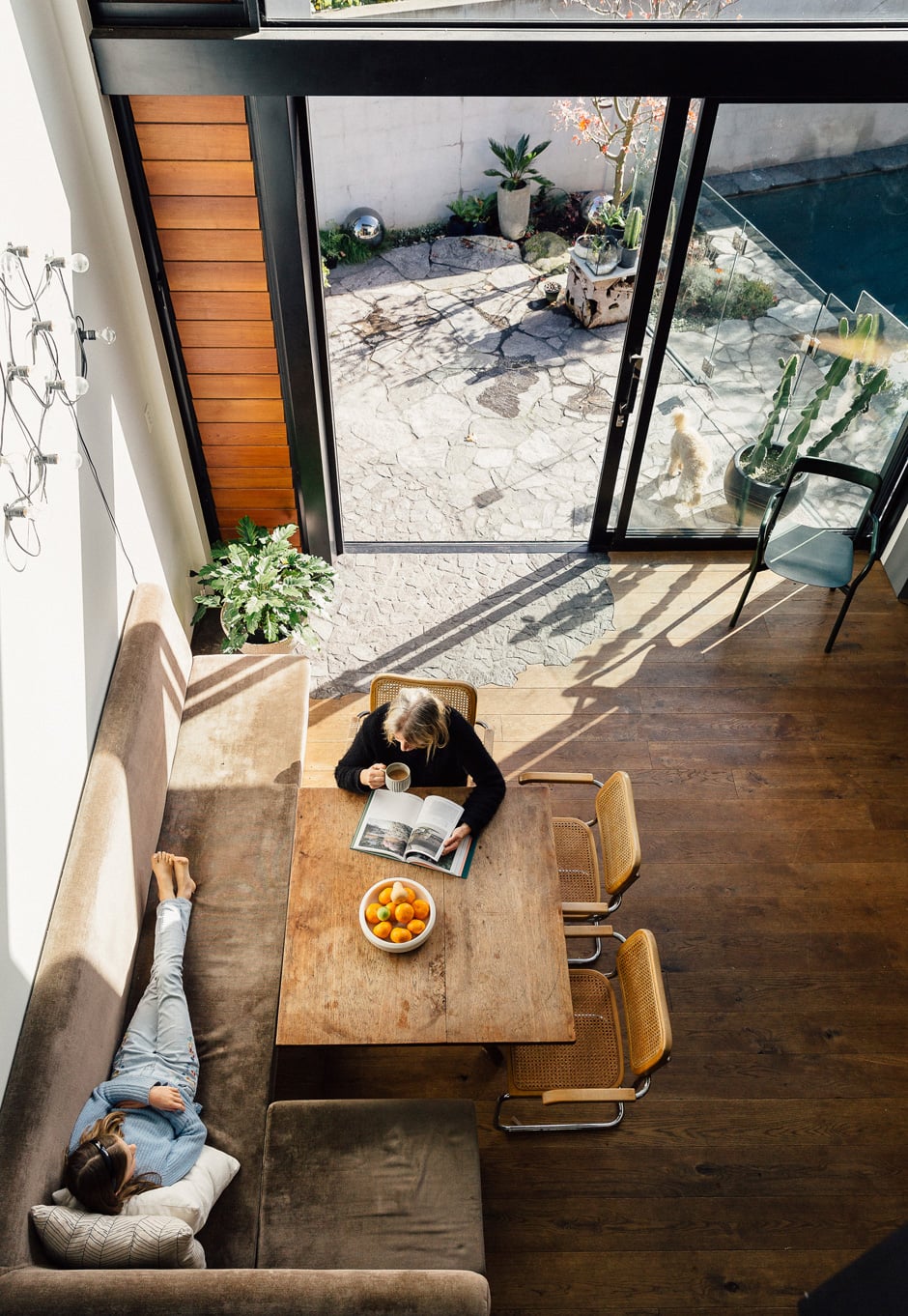 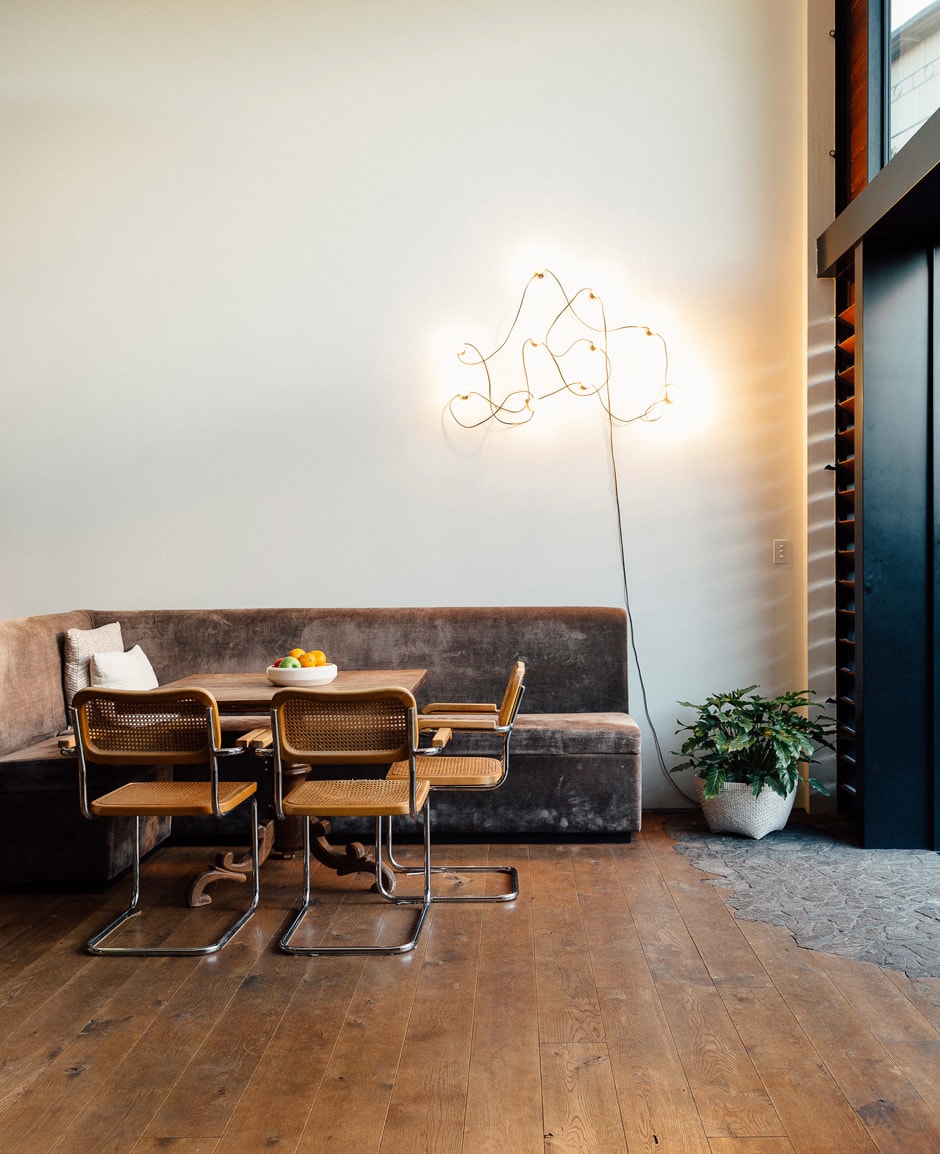 ABOVE This banquette was a Trade Me find that once occupied a café in Fort Street. Sandii reupholstered it, then teamed it with a teak dining table from Indie Home Collective and chairs also found on Trade Me. Sandii and Jared own landscape design company Babylon Gardens and are avid plant lovers. A potted Philodendron xanadu sits pretty at the front door.

The journey to the home’s entrance is along a schist path. The sparkly stone spills over the threshold slightly, as if nature is encroaching on the man-made. Visitors enter directly into the living room, where a soaring double-height void makes an unexpected first impression. “We wanted to give it a real sense of volume,” says Dion. Tall banks of louvres and big sliding doors make this compact area feel generous.
With privacy in mind, a connection to the land has been carefully mapped out using precisely placed glazing with open corners that allow the home full access to daylight. A picture window in the living room overlooks the garden, while a wood burner and full-length shelving are focal points, to stop the TV becoming the centre of attention. 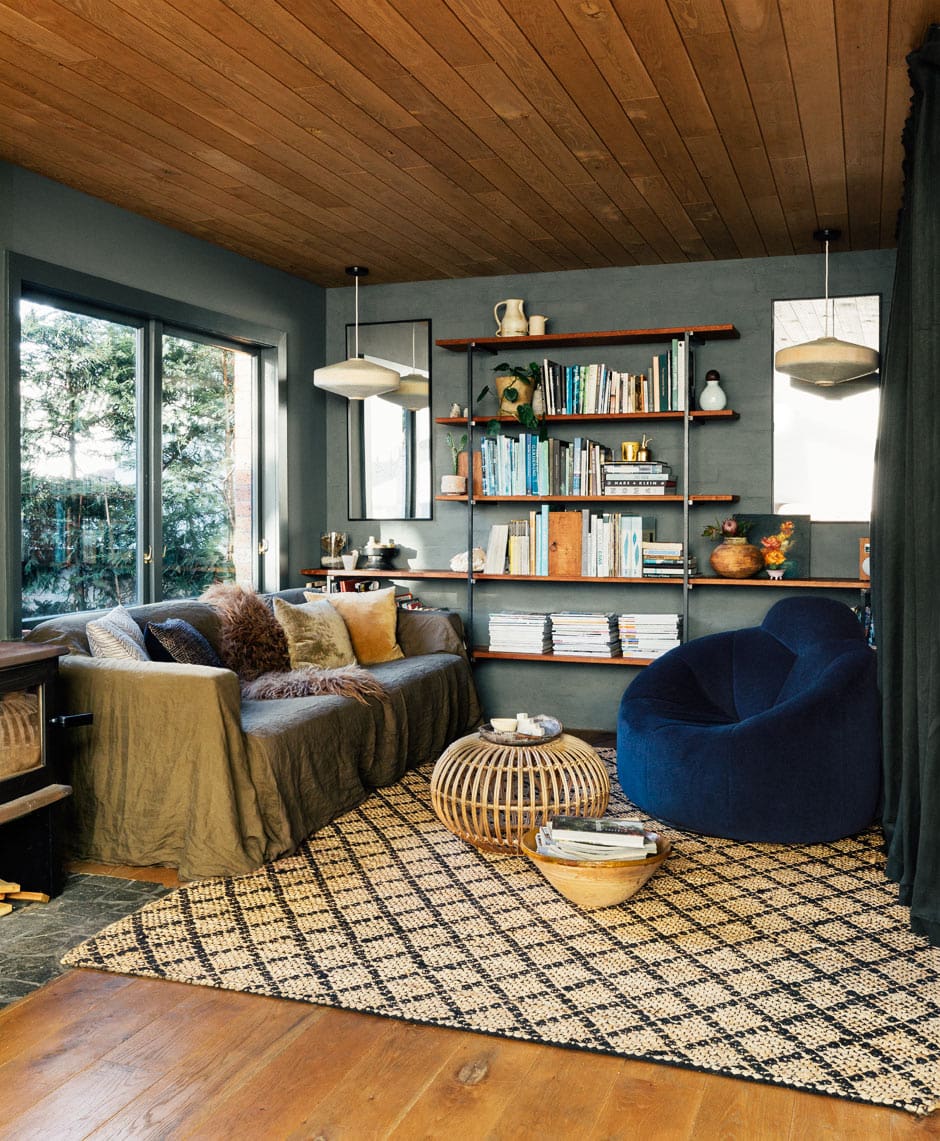 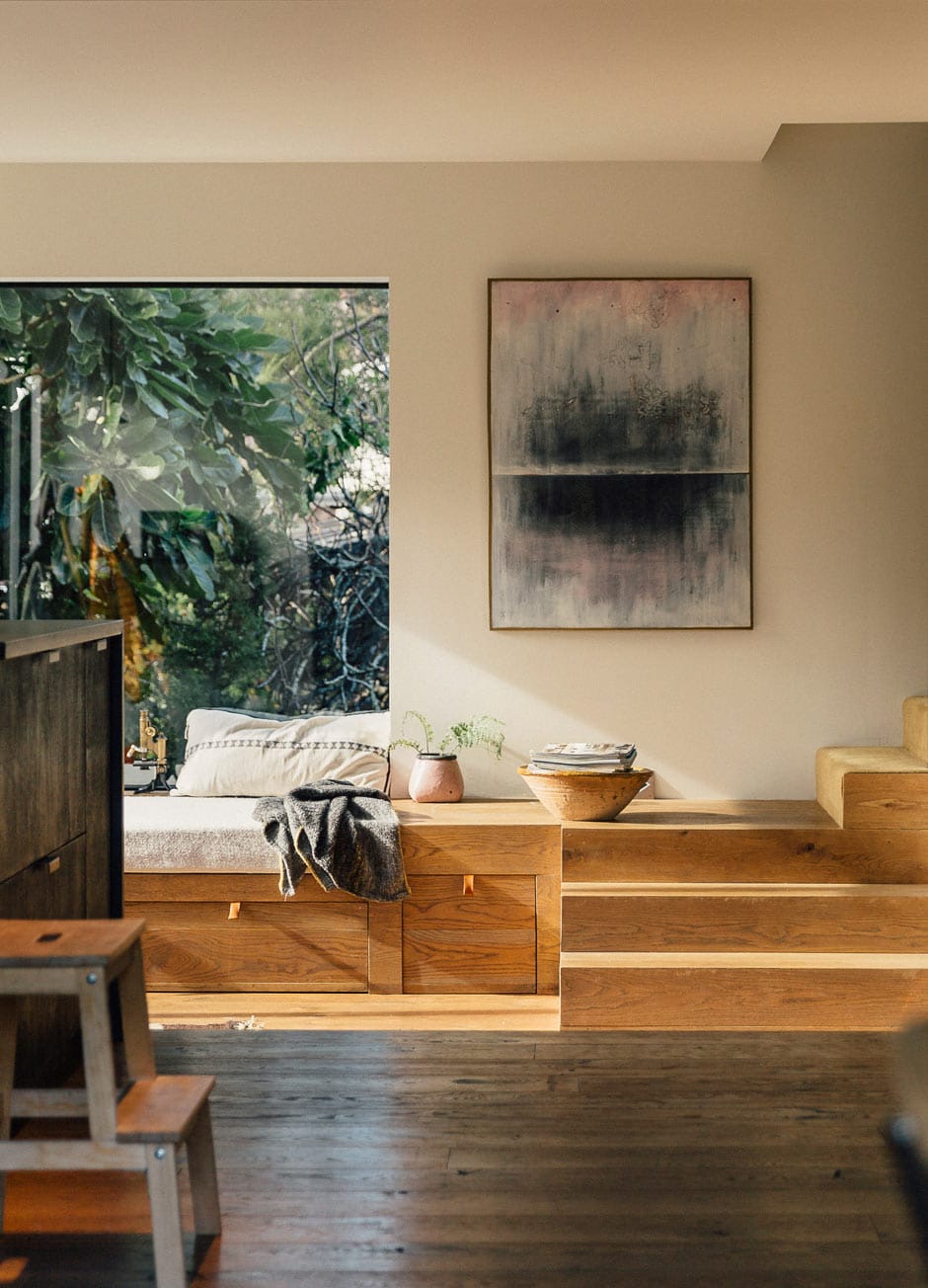 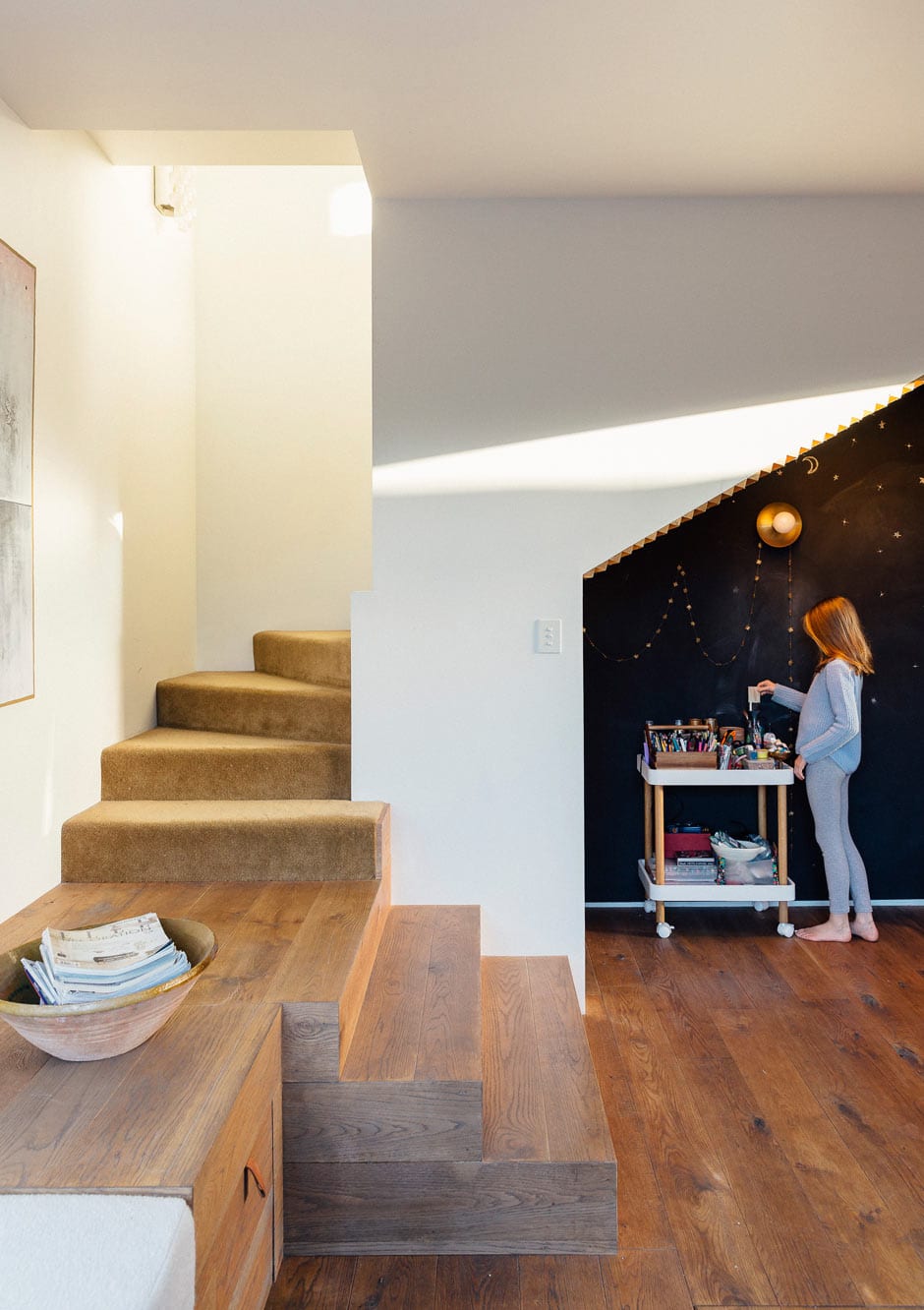 TOP The hero piece in the front living room is the Pumpkin chair by Pierre Paulin for Ligne Roset from Domo. The shelves hold a collection of books and pottery (some of which was made by Sandii’s dad, who also painted the small floral artwork), the paper and balsa wood Coma Lantern pendant lights by Dwarf were bought on a trip to Tokyo and the rug is from Freedom. MIDDLE Sandii’s painting Flaming Dart hangs near an oak bench seat Jared built. This space occupies the footprint of the former carport and gets lots of morning sun. ABOVE The wide stairs in the second living room double as seating. Mercedes has reimagined the drinks trolley as a mobile art station.

More surprising spatial manoeuvres were made in the kitchen, where the ceiling drops to an intimate scale. Lined with dark timber, this space has a galley layout, with cooking and cabinetry on one side and extra storage on the other. “Unusually, the kitchen is a thoroughfare, so we decided not to include an island,” says Dion. Sandii sees it as a black tunnel between the two white living areas.
The second living zone occupies the former carport, which was sacrificed in order to capture the morning sun. Stepped down from the kitchen and including built-in seating, “It’s our version of the sunken lounge,” says Sandii. “On Sundays, we sit here to eat breakfast.” The view of the garden, plus hidden storage in the bench seat and beneath the floor, make it clear the decision to convert was a good one. The car can make do on the street. 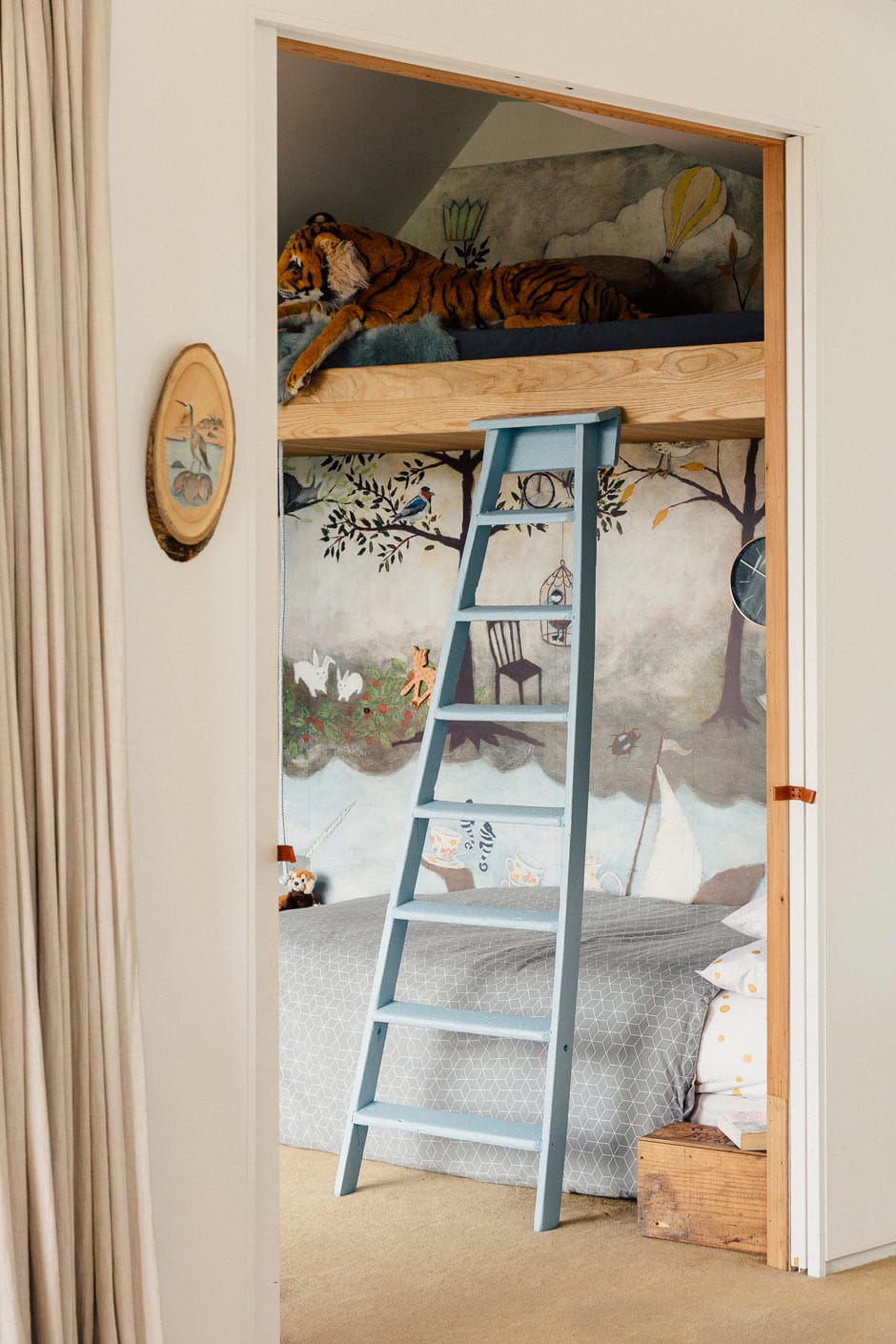 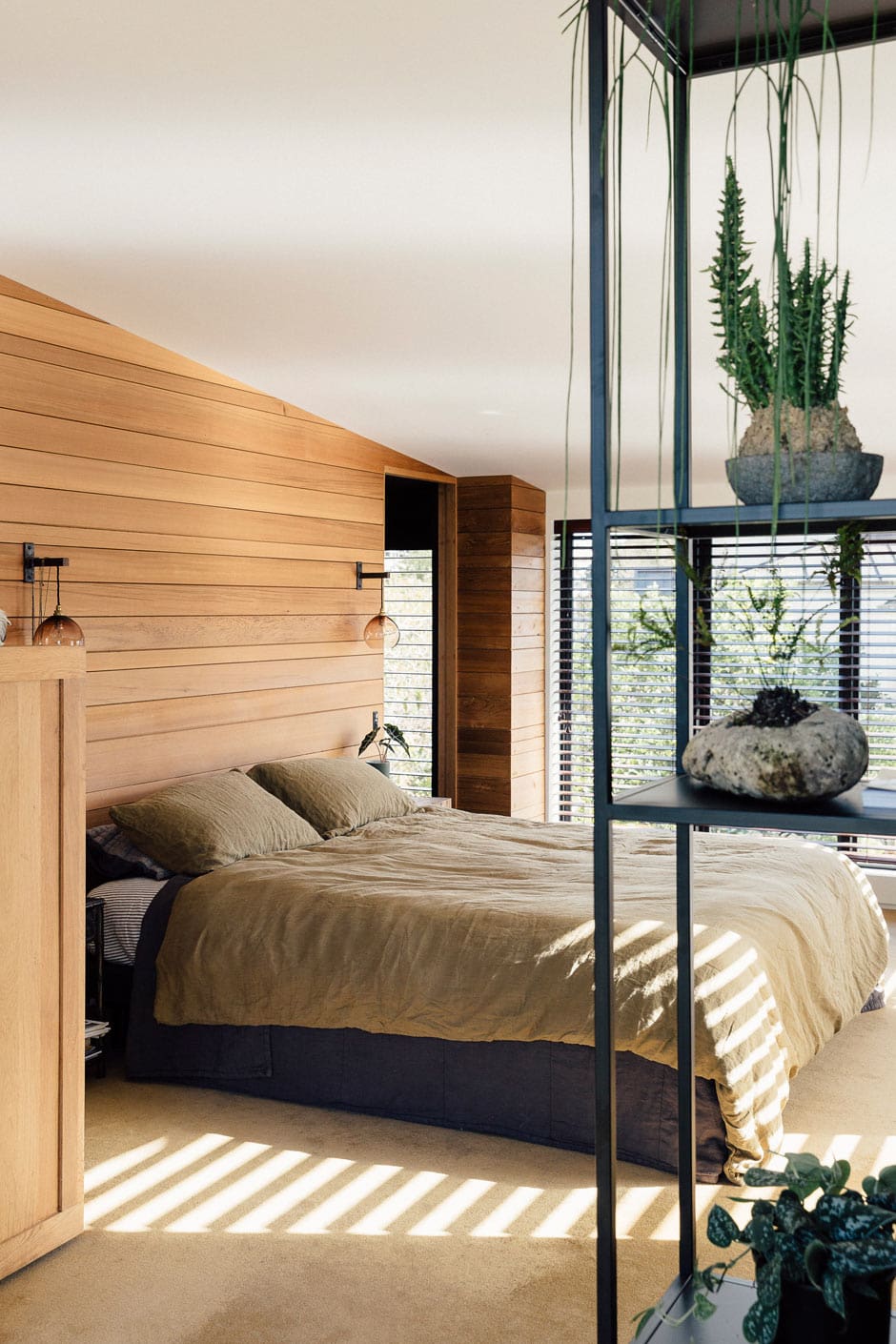 TOP A wallpaper mural in Mercedes’ bedroom is a fantastical backdrop to the bunks Jared designed and built. They’re teamed with bed linen from EziBuy and vintage wooden boxes that once lived in Sandii’s father’s factory. ABOVE Shelves dotted with potted plants separate the mezzanine from the master suite, where timber planks of varying widths transform the wall behind the bed into a special feature.

Stairs that double as a place to watch the cook at work lead from this lounge to two bedrooms upstairs. To accommodate Sandii, Jared and their daughter, Mercedes, the mezzanine landing becomes a wide corridor, where you might find Mercedes practising her dance moves, or Sandii enjoying a morning yoga session.
The hallway’s built-in desk overlooking the main lounge is commandeered on a first-come, first-served basis. It has been a sewing table, a workstation and a place to put the doll’s house. Meanwhile, with a door to the master bedroom not deemed necessary, Sandii and Jared can look through the clerestory windows of the landing to see the stars at night. 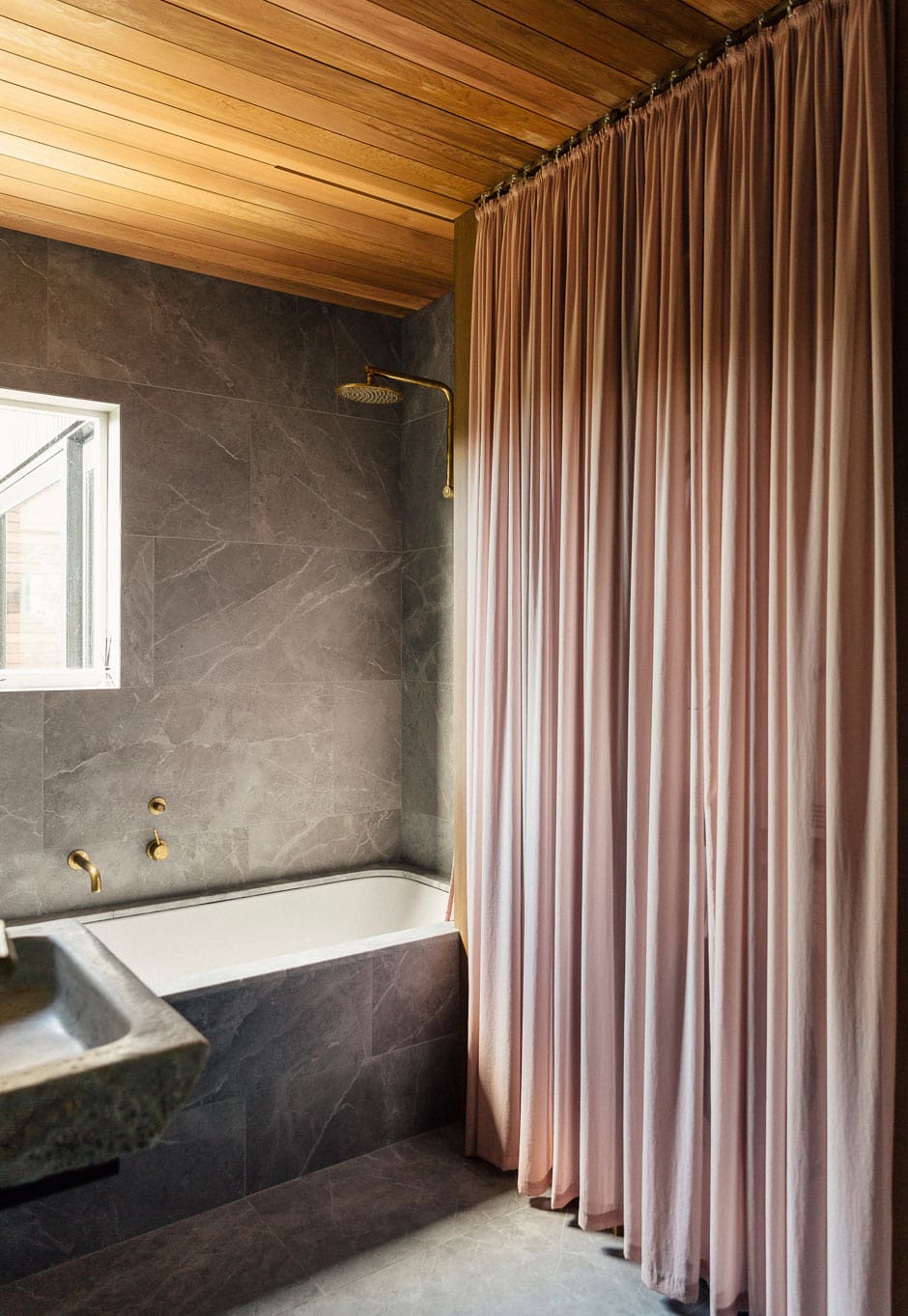 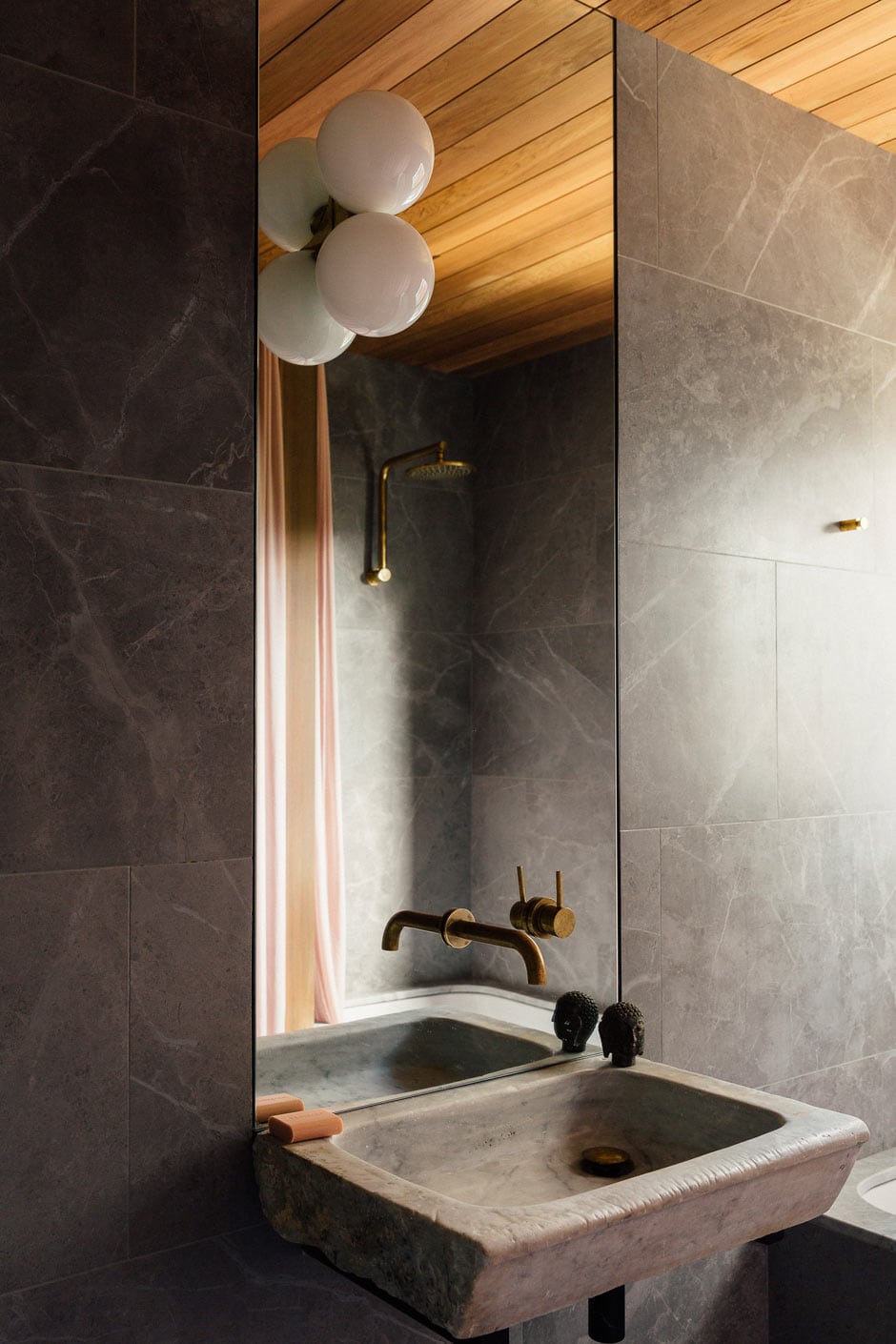 ABOVE Sandii and Jared have had this antique marble sink for ages. To match it, Jared cut out a marble surround for the bath, and then they lined the walls with complementary porcelain tiles. The Double Sconce light from ECC is by Michael Anastassiades. A ballet-pink chiffon curtain cleverly hides the laundry; “It was cheaper and easier to make curtains than to put in doors,” says Sandii.

Rescued and recycled materials bring character to the house. The couple was keen to reuse, not just from a sustainability point of view but also to save money on the renovation. “That’s one reason we chose oak seconds for the flooring downstairs,” says Sandii. “The cheaper boards have a lot more knots, but we like them.”
Playing a long game, the pair’s idea is to upgrade the finishes bit by bit. Not fans of plasterboard, they’re relining the walls as their budget allows. Jared installed cedar panels on one wall in the master bedroom, and he also made the concrete sink in the black-tiled ensuite, which Sandii then polished with a stone and coated in black wax. It goes beautifully with the brass tapware.“The taps will develop a gorgeous patina over time,” says Sandii, “and the best thing is, I don’t have to keep them sparkling clean.”
In the downstairs bathroom, there’s an antique French marble sink, which the couple had lugged from place to place for years. In the kitchen, Jared’s handiwork includes a vintage shop counter (originally intended to be the island that never was) that he turned into open shelving. “We felt bad cutting it up, but we still love it,” he says. 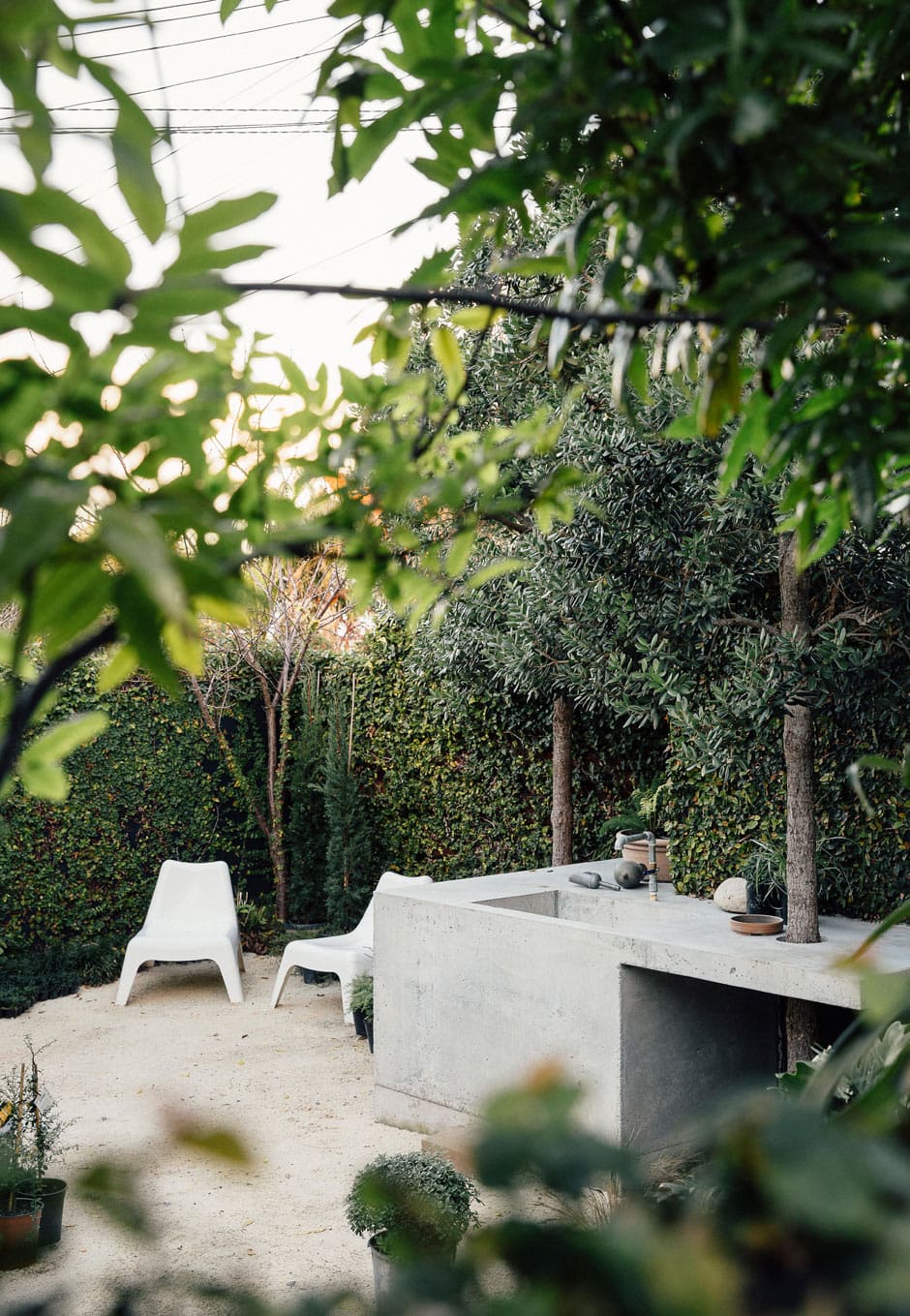 ABOVE A year after the home was completed, the adjoining unit came up for sale, so Sandii and Jared snapped it up. This second home and its garden, pictured here, are now the Babylon Gardens office and showroom.

Out in the garden, the careful planting of hedges has resulted in improved privacy. To the north, a set of floating concrete steps leads to an area with raised vege gardens. But the real action takes places in the western courtyard. Wedged between the edge of the living room and the fence is a swimming pool. “Our friends didn’t believe us when we said there was space for one,” says Sandii. “But we could see the extra metres a griselinia hedge was taking up.”
Toasty in winter, with spaces to splash about in come summer, this unpretentious
unit is now a covetable urban retreat – a diamond find.