This cabin’s diminutive form meant its owners had the financial flexibility to use loads of timber. 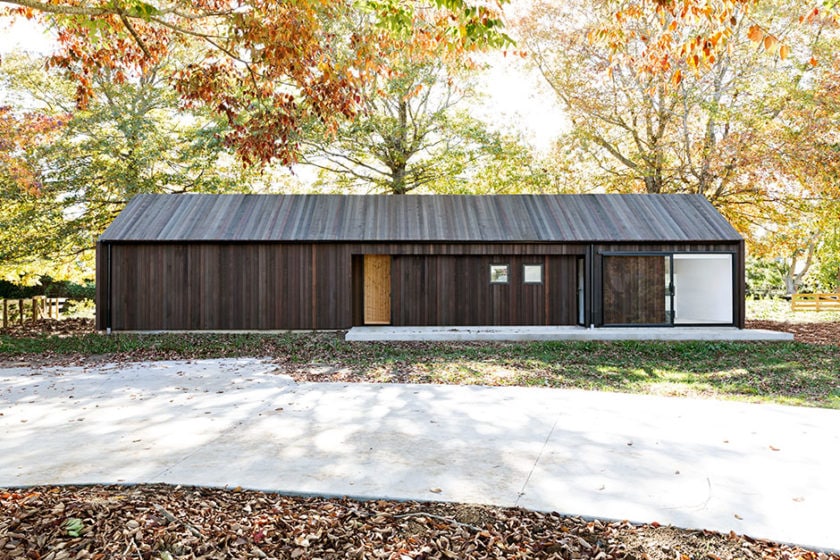 Chocolate-coated with a caramel centre, this sweet little cabin tucks into a grove of oaks on a semi-rural section on the outskirts of Cambridge. Enveloped in dark-stained cedar, the front door opens to the honeyed tones of Siberian larch, which lines the walls, floor and ceiling. Low-key in its setting, the cabin is nevertheless a big hitter in the design stakes — which is exactly what its owners, Nicola and Ben Lee, envisioned.
Accustomed to working on bigger projects, this mini home was carpenter Ben’s chance to be somewhat experimental. “I thought we could be ambitious and do things that would be astronomical cost-wise on a larger scale,” he says.
Located in the wooded corner of a 0.5ha section in Tamahere, the cabin is part of a long-term plan to house three generations of the family on the same block of land. The couple and their three children — Sienna (6), Bo (4) and Poppy (18 months) — lived it in for a short time, but have since moved into the newly completed main home on the property, allowing Ben’s parents to take up residence here. 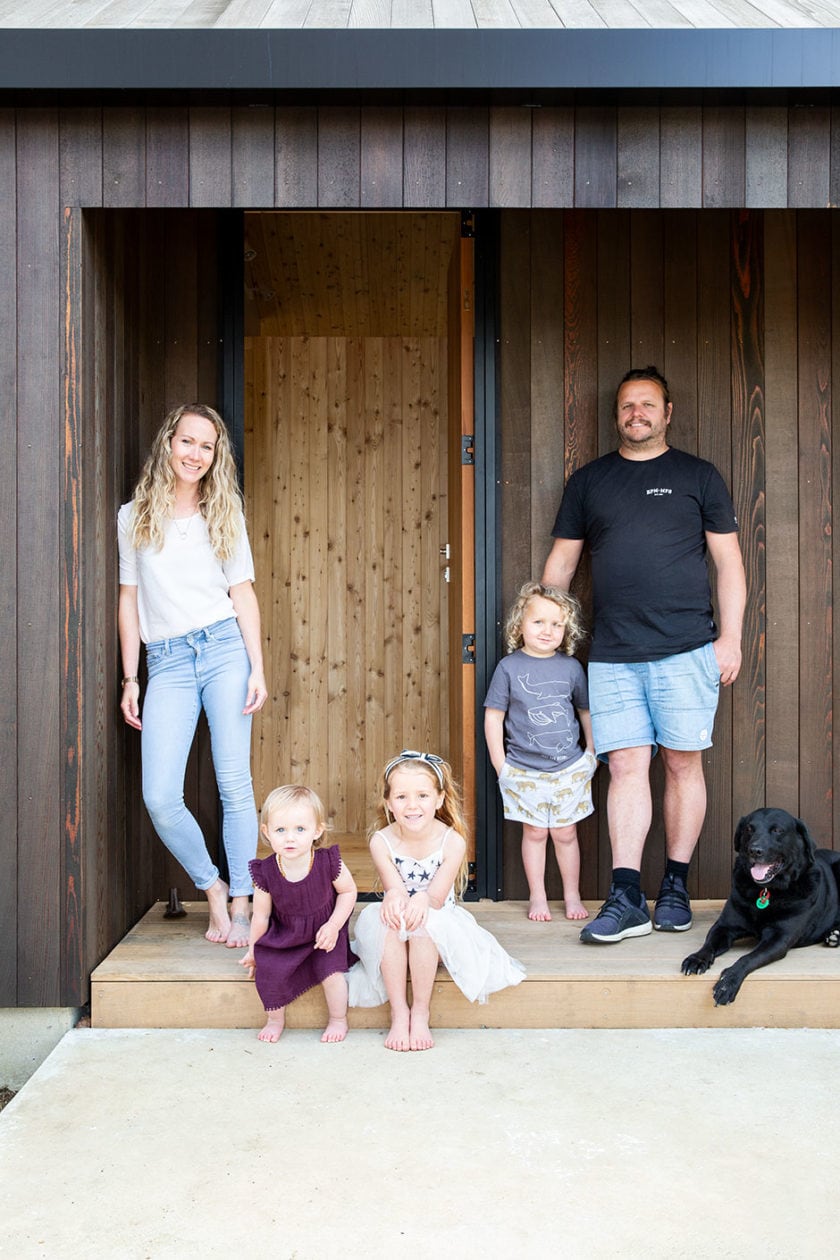 ABOVE The Lees at the entry to the cabin, which they lived in for a while but is now inhabited by Ben’s parents. The home’s lack of decking (apart from this little covered space under the eaves by the front door) was a considered choice, and the cabin is so much a part of the landscape that there’s no gardening required.

Although the cabin is a minor dwelling, Ben went for major impact to ensure the home has its own identity. Working with Tane Cox of Red Architecture, they devised a form that’s evocative of a Nordic log house: a simple rectangle beneath a gable roof. It must have been tempting to veer off into the shed vernacular with a corrugated-iron roof, and it certainly would have been easier. “But the aesthetic we wanted was of just one material — like a piece of furniture — so we made the roof from timber too,” says Ben. Cleverly, the wood is essentially used as a rain screen and has a steel roof beneath it.
The cabin’s vertical cladding runs seamlessly into the gentle gable, giving height and a singular essence to the form. Two small windows and a black aluminium sliding door are all that puncture the façade on the south elevation, an intentional approach as this side faces the property’s main home. On the north and west corners, large sliding doors open to the woodland. 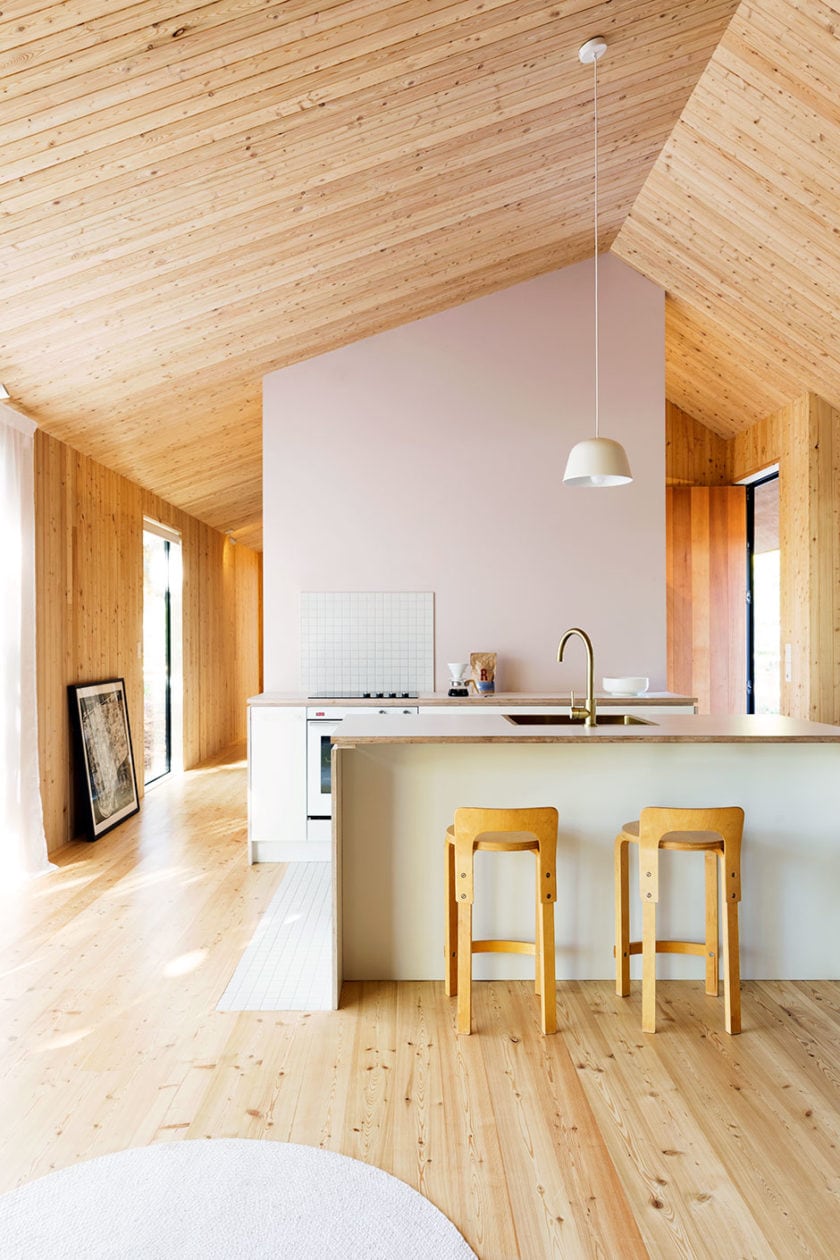 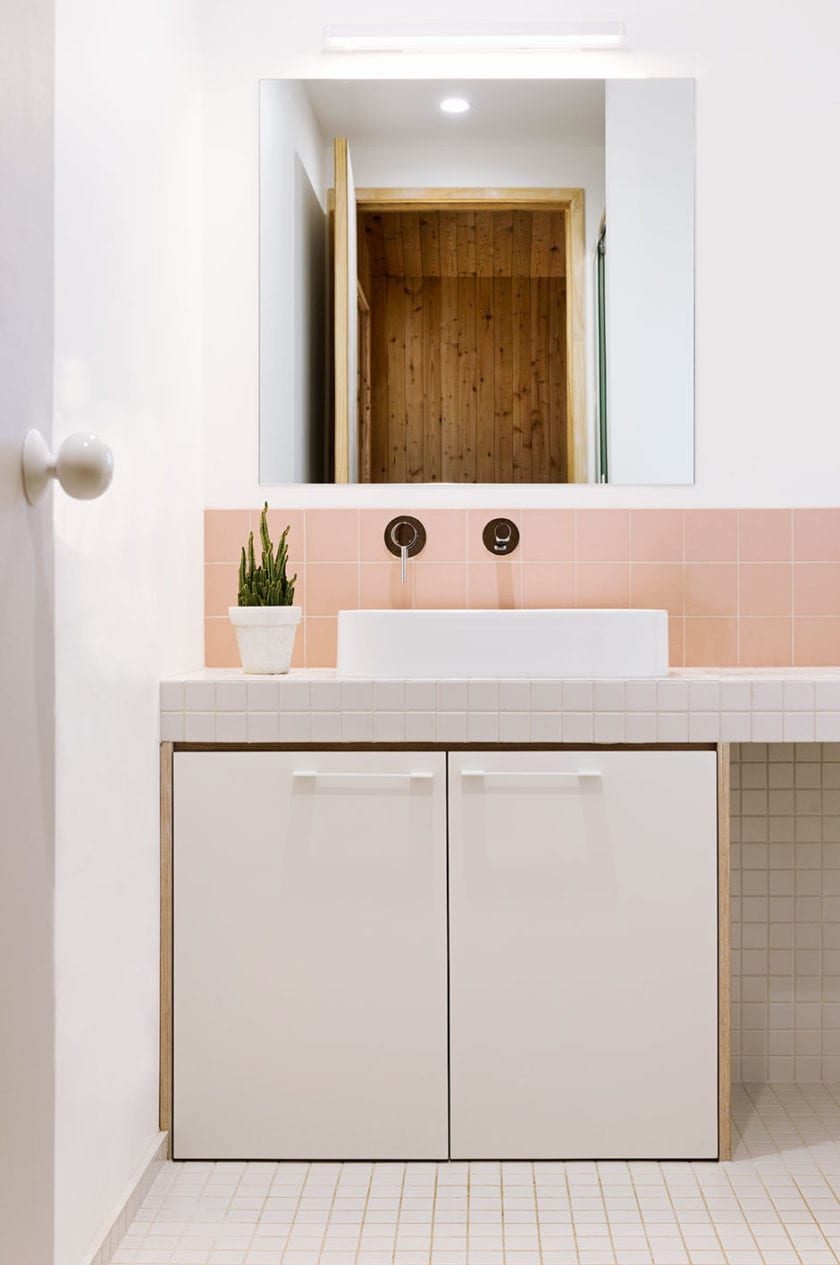 TOP & ABOVE Rosy Winckelmans tiles in the bathroom pick up on the Resene Blanched Pink of the dividing wall in the main living area.

Inside, the larch forms a cocoon of timber that’s offset by a playful pink wall separating the open-plan kitchen and living area from the bedrooms. Although Ben used white birch ply cabinetry in the kitchen and for the bathroom vanity, he admits to having a love-hate relationship with it. “It has a tendency to delaminate after 20 years or so, whereas I feel confident that the larch will be here in 100 years’ time.”
The cabin is 90m2, but having grown up in a home only slightly bigger, Ben says he doesn’t consider it small. “It’s easy to clean and keep warm; it’s a great size for my parents.” It’s certainly fit for purpose. A hybrid space housing a laundry and bike storage has been squeezed into the footprint and there’s a nook with a built-in desk as well. 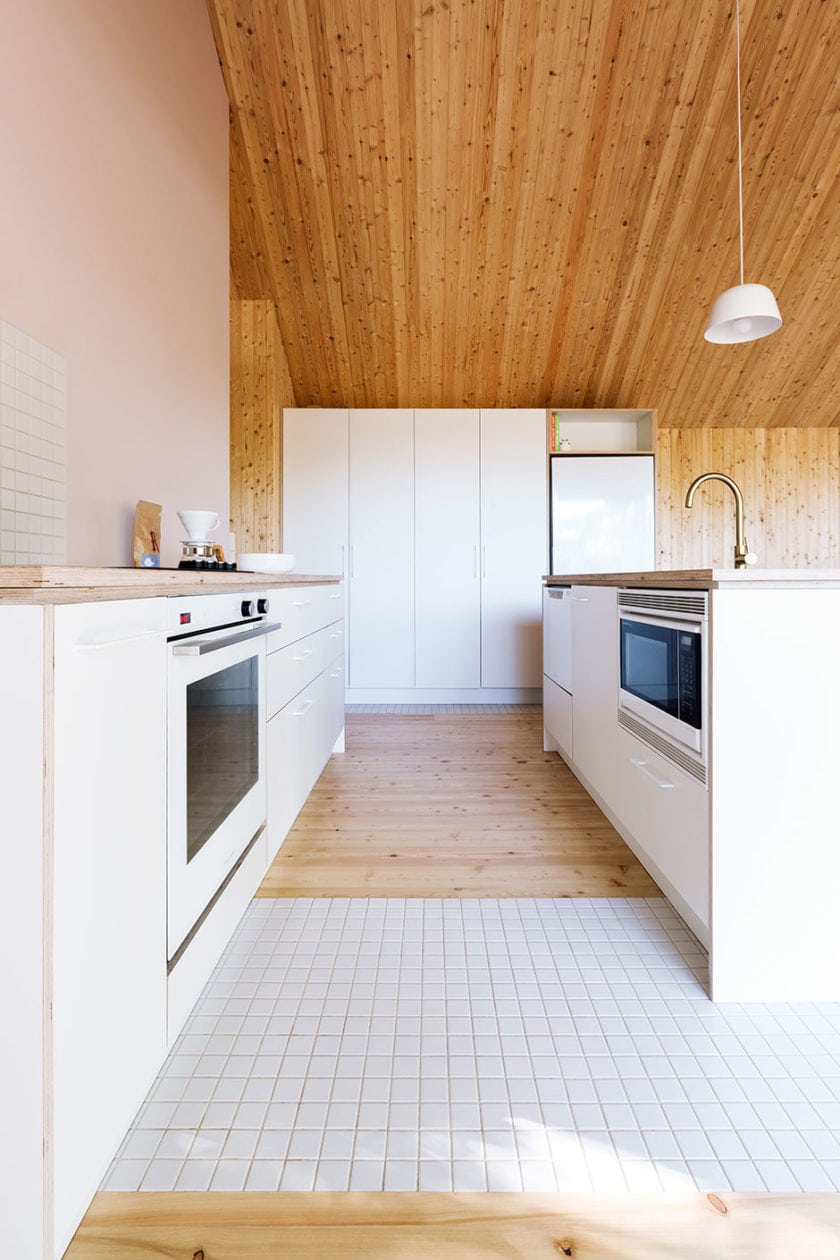 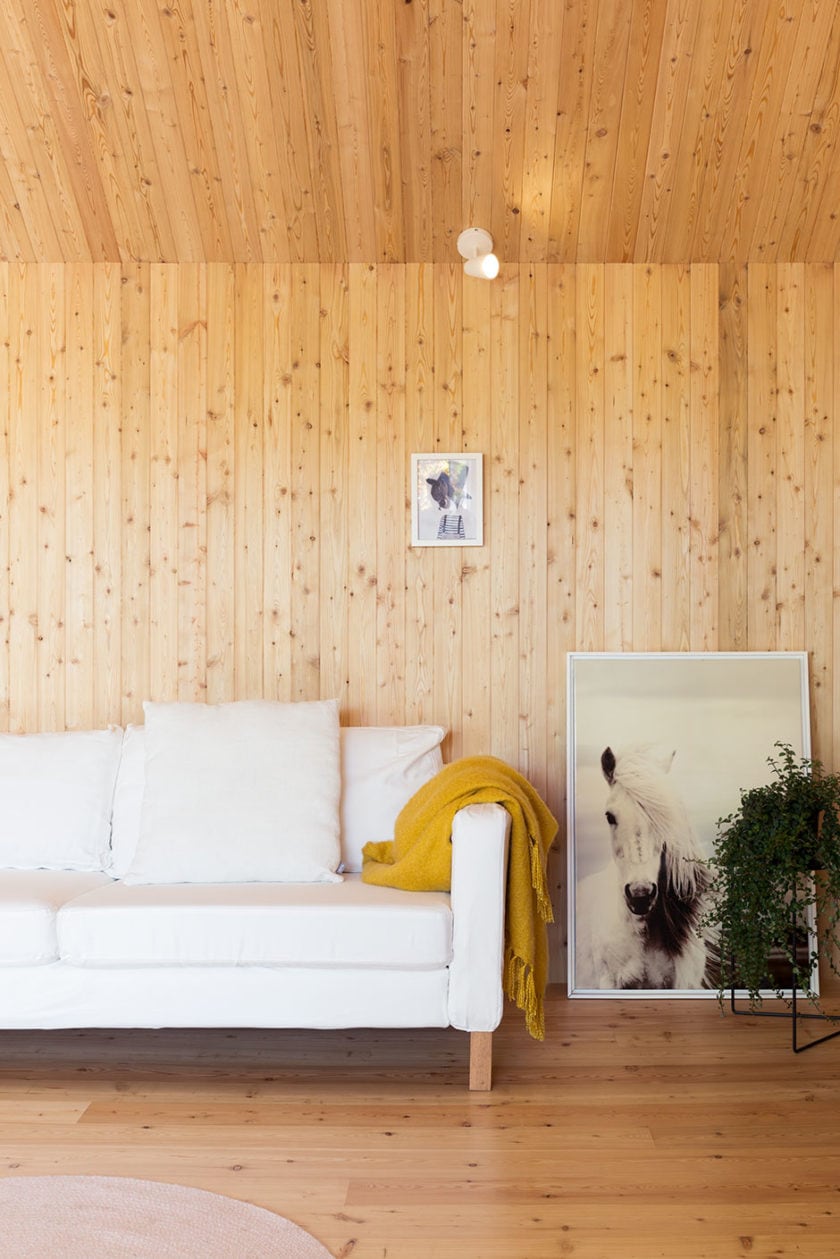 TOP The tiles behind the kitchen splashback waterfall down to the floor to create a sense of flow. ABOVE In the living area, an Ikea sofa sits beside prints from White Fox & Co (on the wall) and The Design Depot.

During the period the family of five lived here while they waited for their current home to be habitable, the cabin proved a great size for them too. Sienna and Bo slept in bunks, and Ben and Nicola would transfer baby Poppy to the kids’ bedroom in her carry cot once she was asleep. “There’s something quite cool about three kids sleeping in the same room,” says Ben.
Nicola, who’s originally from the UK, appreciated the homely, sturdy feel of the larch walls. “The house keeps a really nice temperature — cool in the sun and cosy in winter.” 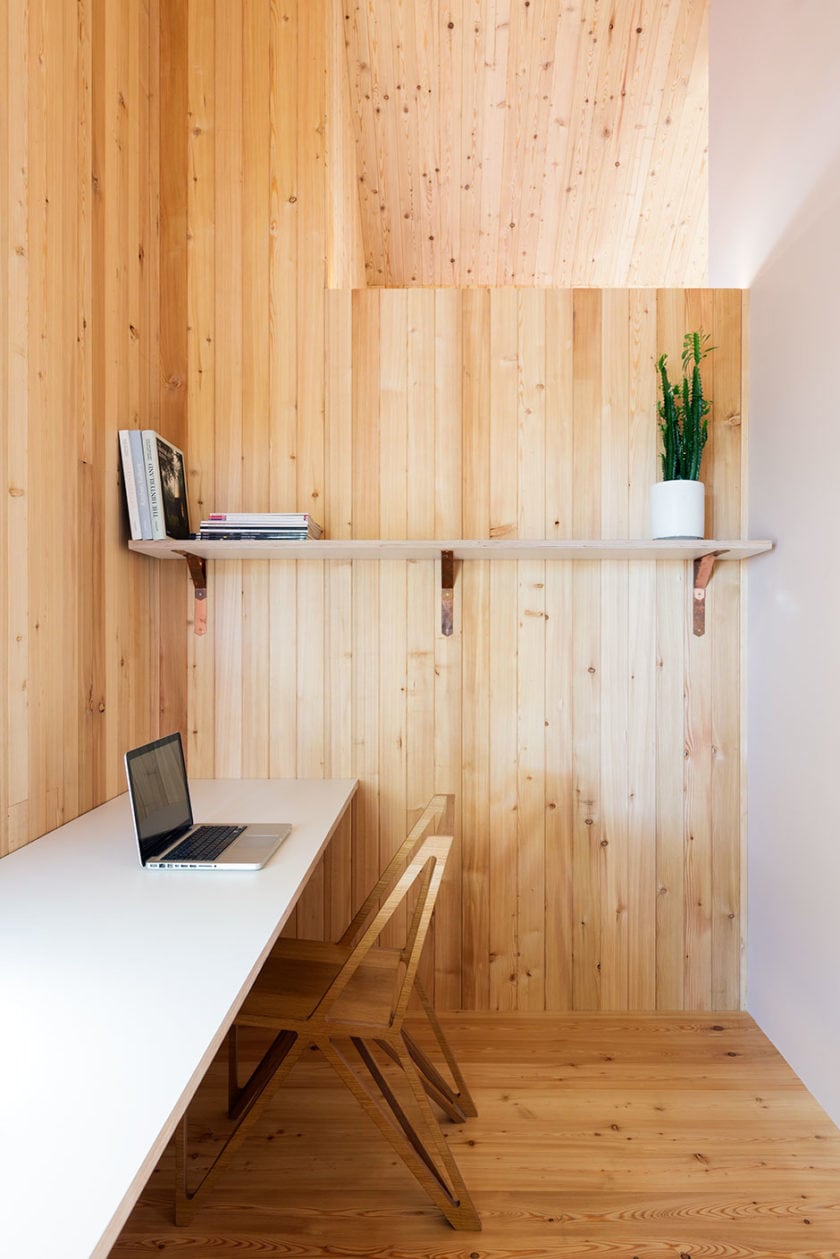 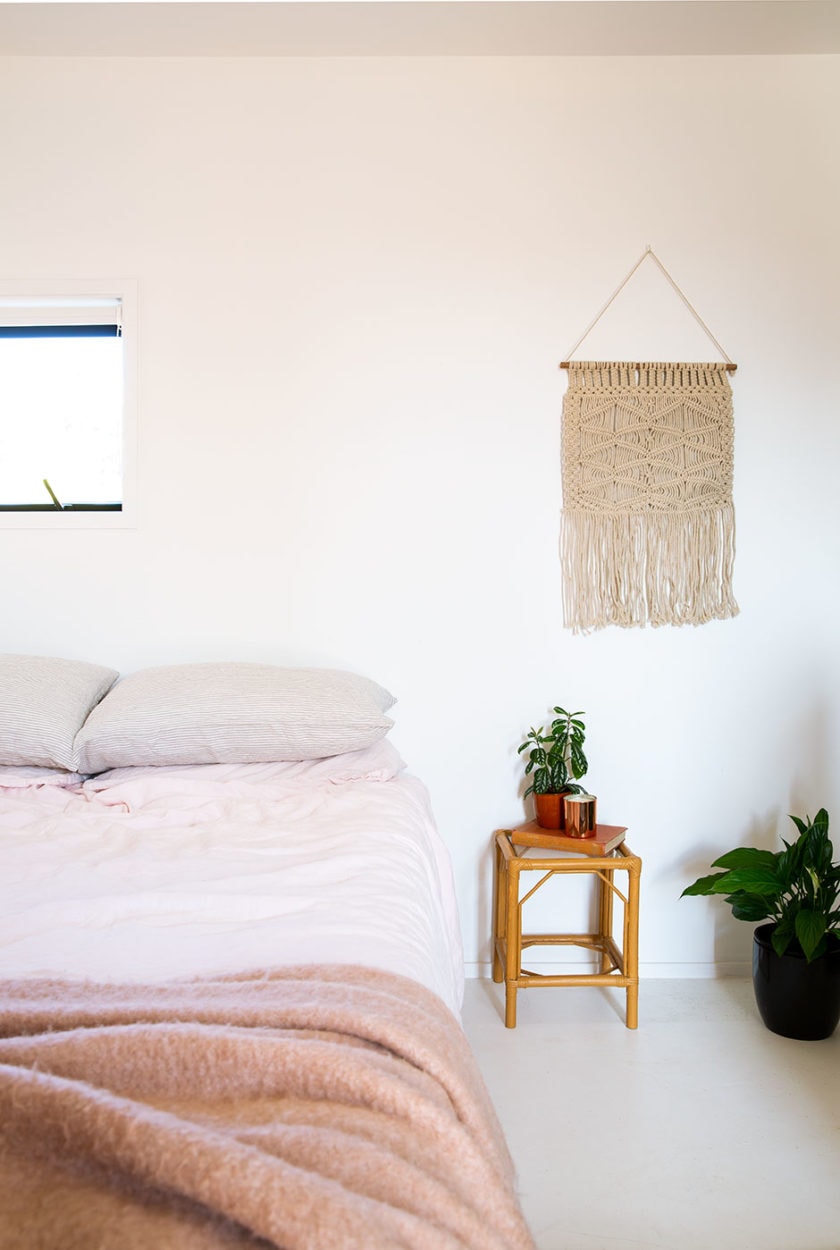 TOP A nook with a built-in desk serves as an office and is located behind a half wall that allows natural light to spill in from the entryway. ABOVE Nicola admits that the macramé wall hanging in the master bedroom was not created by her own fair hands but bought at Kmart.

Now that the kids’ grandparents have moved in and she gets to look at the cabin from across the way, she appreciates another side of it, too. As well as the wonderful togetherness of having Nanny and Pop so close — “Even our littlest finds her way over there, and the dog picks and chooses who’s going to feed him” — it’s no bog-standard granny flat. The cabin is strong, sculptural and quite at home in its wooded surrounds. “It’s beautiful,” she says. 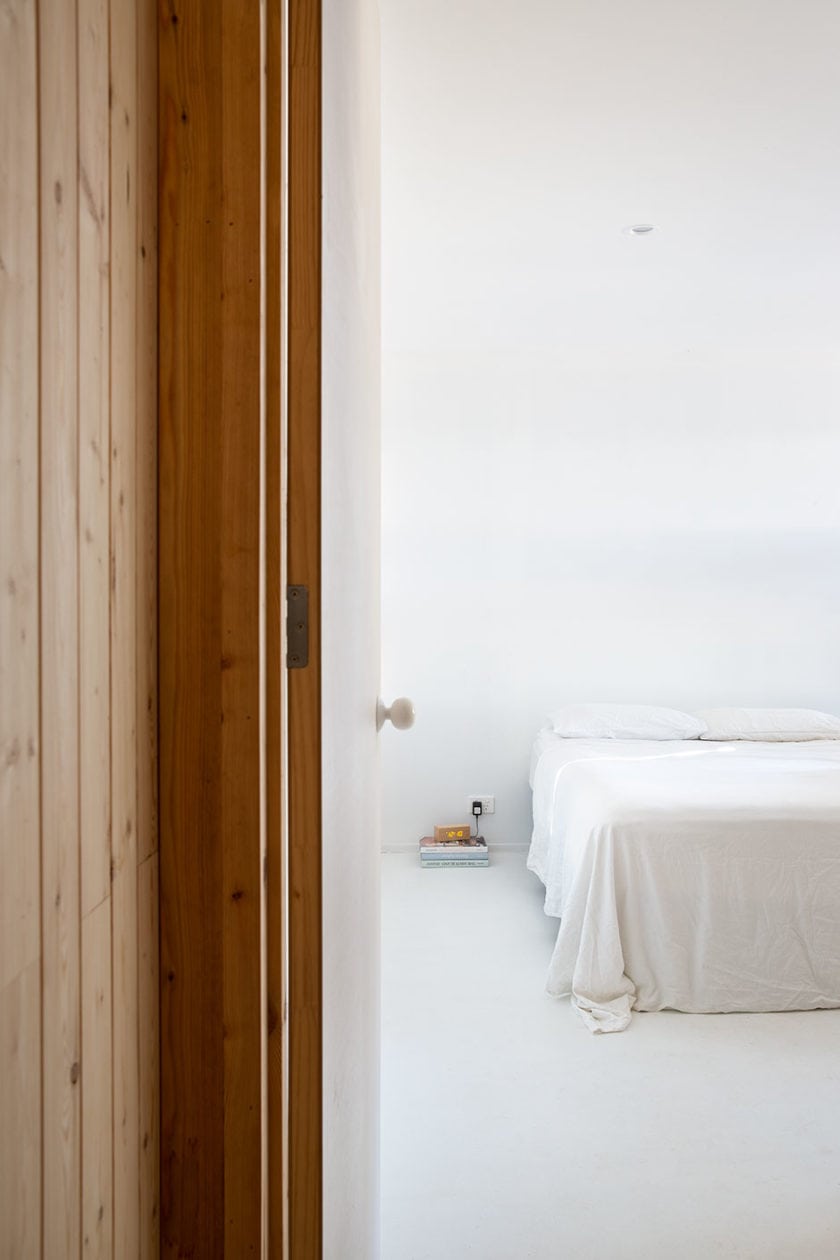 ABOVE The bedroom floors are painted in Resene Black White.