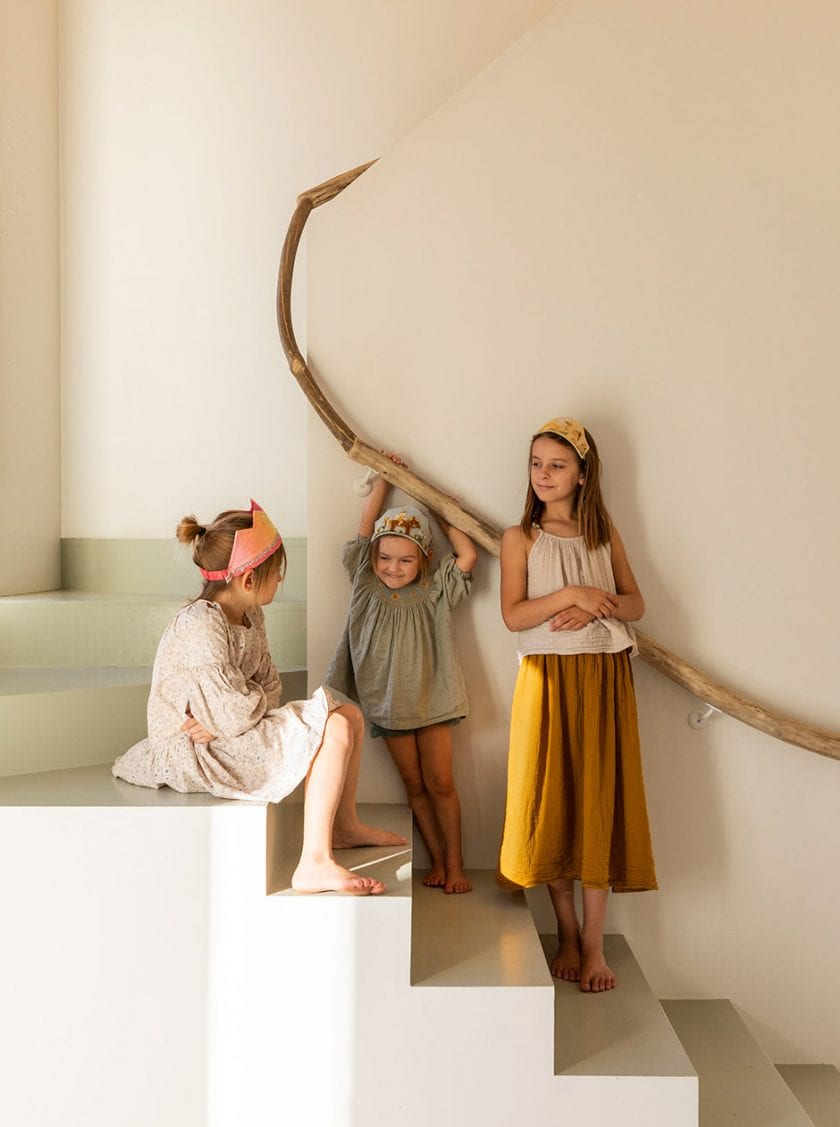 A magnificent gumtree once stood on the spot that Chelsea Thorpe calls home. As little girls, she and her sisters would swing from its branches on a swing hand-carved by their dad, high over the hillside below. Decades later, the old tree rotten and felled, her own little girls are continuing its legacy, their bright eyes embracing its view of the valley in the home Chelsea and her husband Gene Walker have built in its place.
Founders of Longbush Wines, Chelsea’s parents have owned this property in Gisborne’s Whataupoko for 35 years, and generously gave her and her sisters a section each. With three daughters — Primrose (10), Coco (8) and Orla (4), plus a fourth child now on the way — and budgetary contraints in mind, she and Gene imagined building a simple home on theirs that was a pleasure to live in, easy to maintain, and not too big but spacious enough to accommodate the kids’ home-schooling and Chelsea’s clothing-design side hustle. They also wanted it to run on sun. 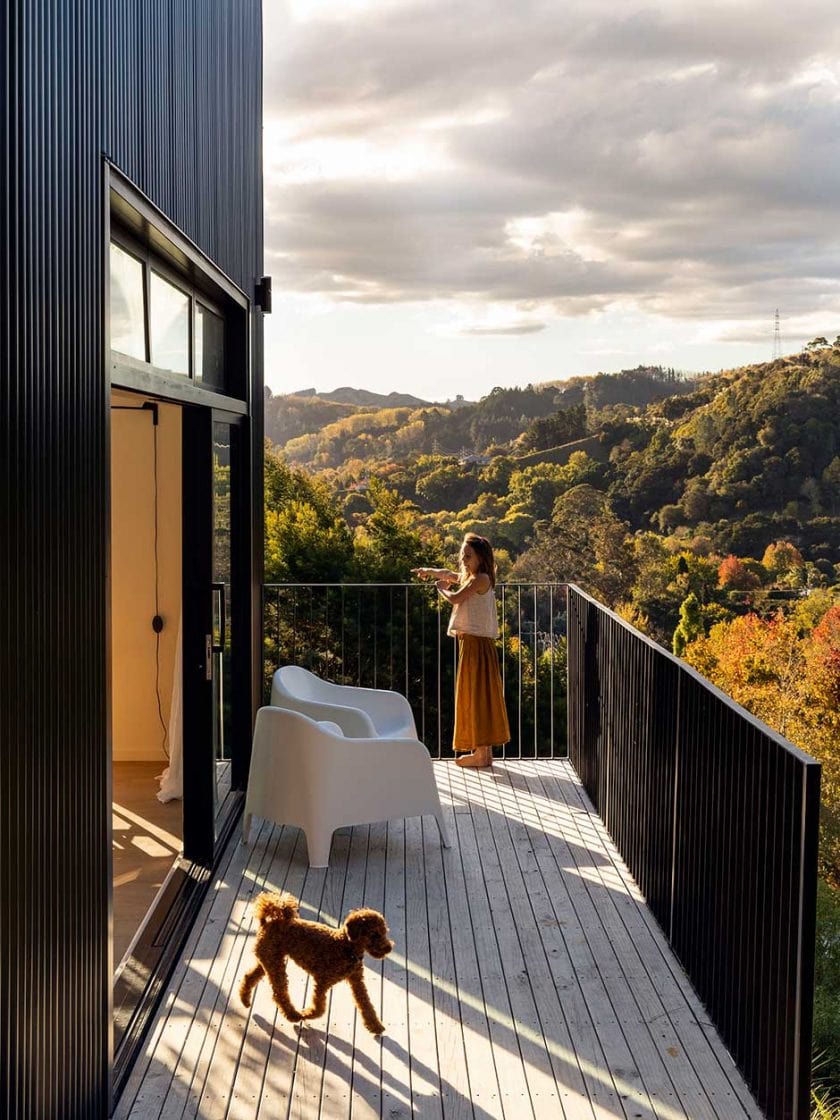 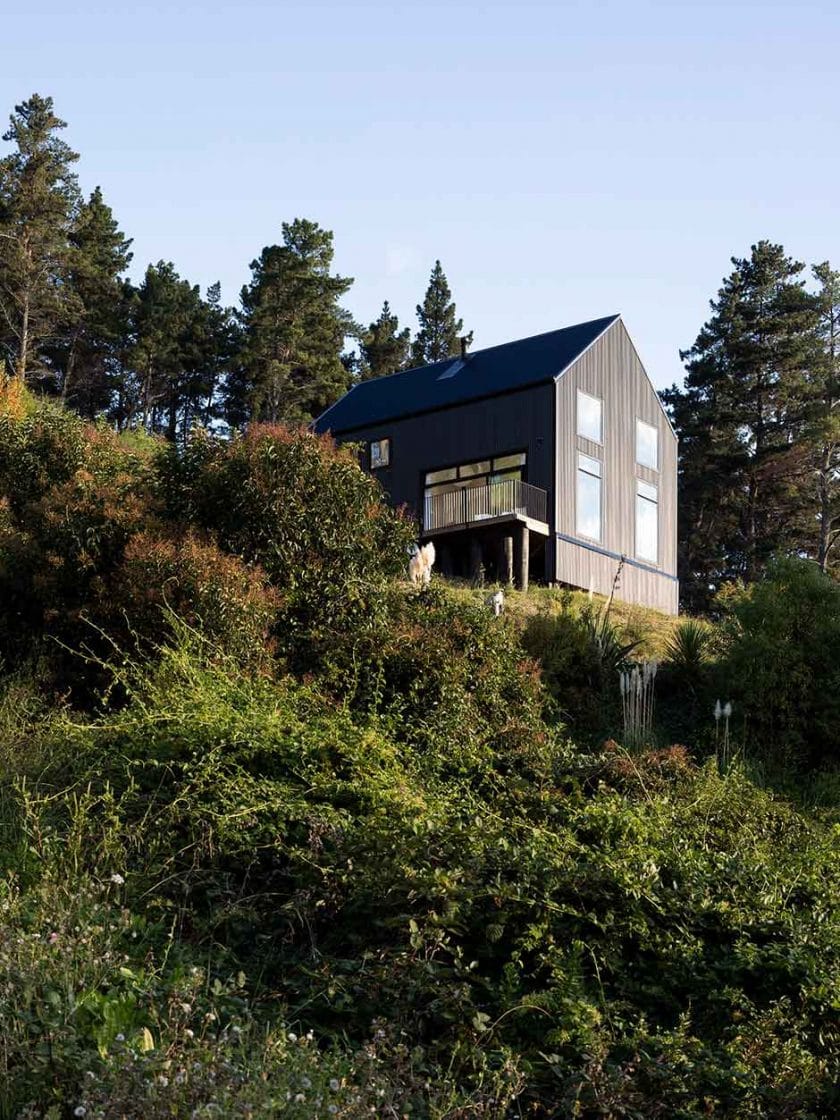 TOP “The large sliding doors face east, so we get dappled light through the trees in the morning; the tall windows face north, so we get the midday sun, which we framed so we’re not overwhelmed with heat in summer; and we get gorgeous sunsets through the west-facing kitchen windows that also capture the city lights,” says Chelsea. “Soon the trees on the south-west ridge will be removed, which will give us views of the bay and Young Nick’s Head too.” ABOVE Having noticed that the light-coloured homes below them reflect a lot of light, the couple went dark with Colorsteel in Ebony, so theirs settles back into the landscape. Much of their property was previously covered in pine trees, and removing those within falling distance has let the landscape change. “We’ve planted heaps of natives, but it’s also self-seeded a lot and I think that’s the best thing for it,” says Chelsea.

Admitting it’s pretty extraordinary that she “just drew a picture and gave it to a draughtsman”, the clever creative says she had a strong vision and simply put her maker’s mind to figuring out a design. “Even though I didn’t know how to design a house, I’m able to visualise space quite easily, and I knew the site and how we wanted to live. It’s amazing to stand back now and look at a house that not that long ago was just a sketch on a piece of paper.”
With the foundations laid and some of the construction completed, March 2020’s lockdown threw a spanner in the works, but ultimately served to bring the project even closer to home, with artist/Longbush Wines sales manager Gene and Chelsea’s winemaker/ultra-handyman dad John taking over and completing the build after hours. The family raced around the day before lockdown, collecting paint, plywood, flooring — anything they thought they could use. Handily, they were all living with John, and Chelsea’s mum Wendy Baxter, at the time, so they were able to stick to their isolation bubble yet keep on keeping on. 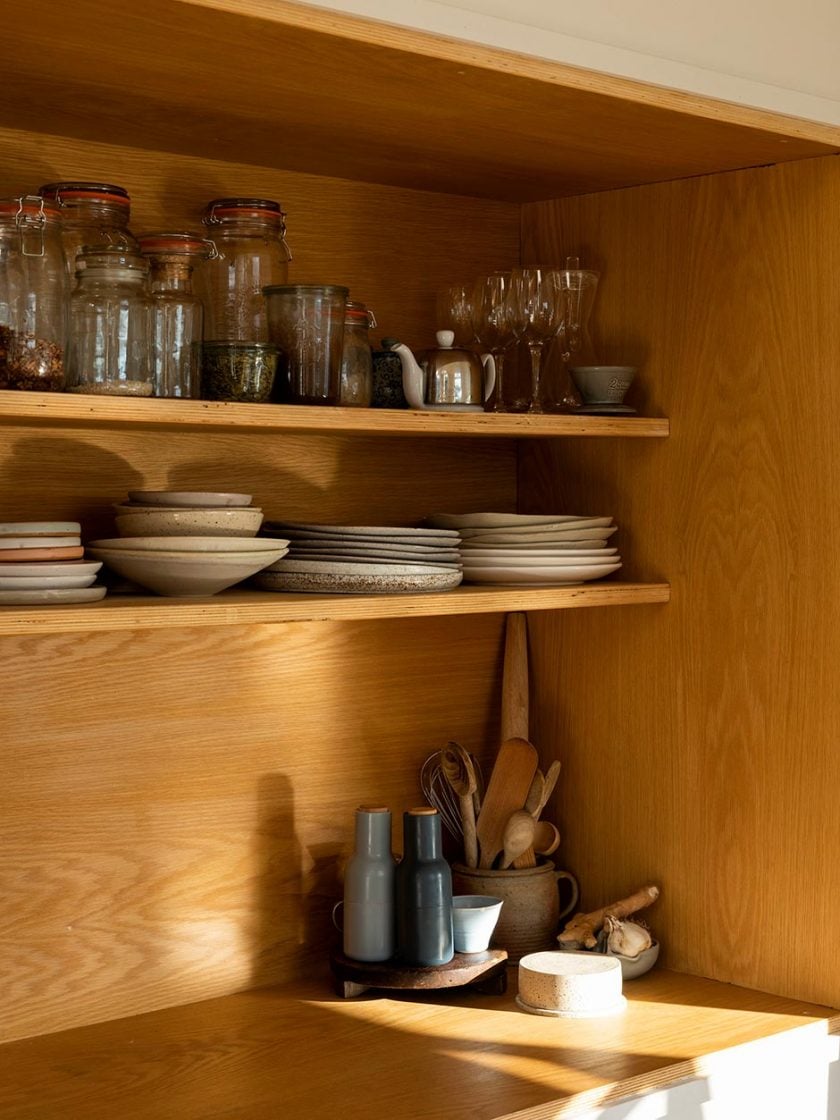 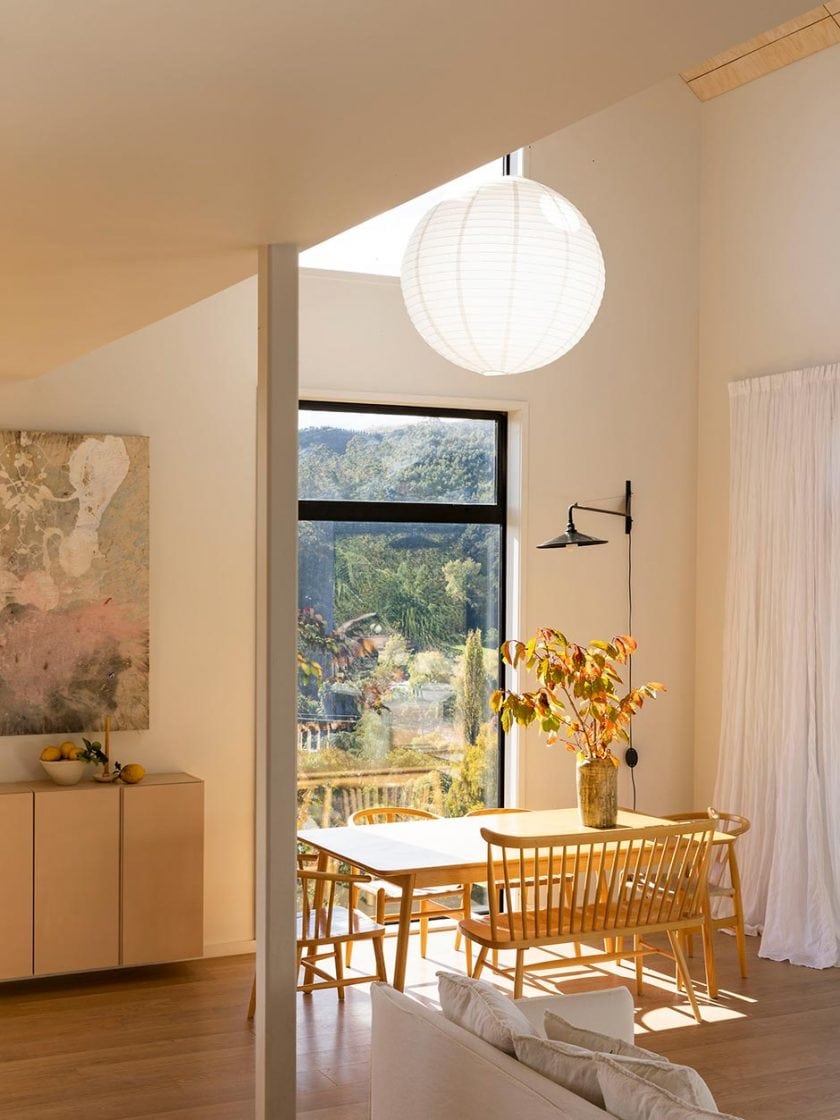 LEFT The outlook from the Radial dining table by Città is leafy as far as the eye can see, so the home feels a lot more rural than it actually is. The walls throughout are in Dulux Haast Half, which Chelsea also used to whitewash the plywood ceilings, and the floors are Malmo Exquisit Waveless Oak laminate from Carpet Court. This Finn wall light is from Mr Ralph, the Ivar cabinet is from Ikea and the artwork above it is by James Robinson. ABOVE Chelsea stuck to her guns on certain design points, like her kitchen nook, which savvily borrows space from under the stairs. “Everyone said, ‘You should use [the empty space] for storage’, but I was like, ‘No, this will work!’, and now it’s the most usable spot in the kitchen,” she says.

They were aware of only a few homes in Gisborne that were off the grid, so their solar goal was kind of an unknown, but they thought they’d give it a go and see how it worked out. Turns out “it’s life-changing” according to Chelsea, who doesn’t miss electricity bills one bit. “We have gas for our hot water and cooking, but that’s not a huge amount. I think more people need to look into investing in it — it’s not even that expensive, it’s crazy! It makes us feel good knowing we’re doing something right. Without a doubt, it’s one of the decisions we’re most proud of.”
The four-bedroom home’s key design features also contribute to this cause: a double-height void in the living area connecting to a mezzanine, and windows and sliding doors positioned to soak up the sun. “Our only heating is our fire, so the large void and open mezzanine work well, staying really cosy in winter,” says Chelsea. 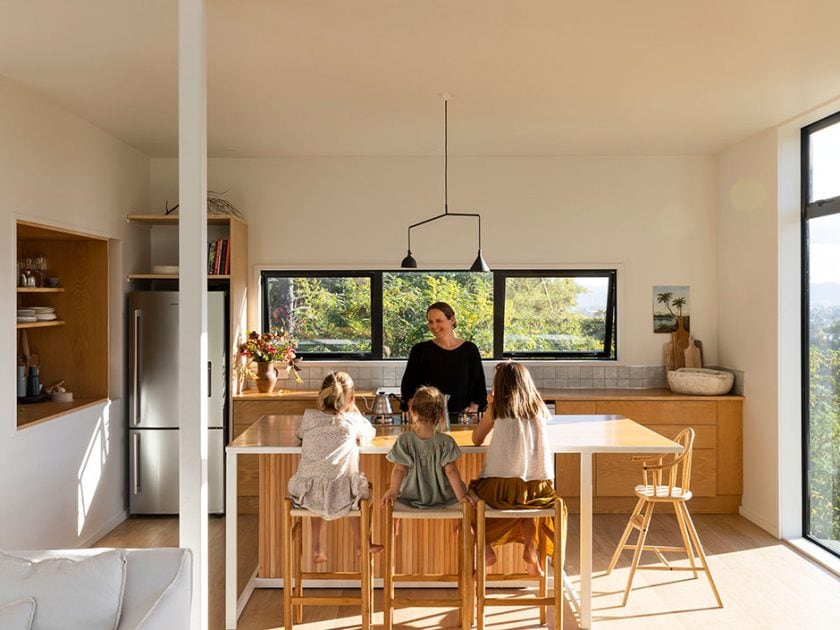 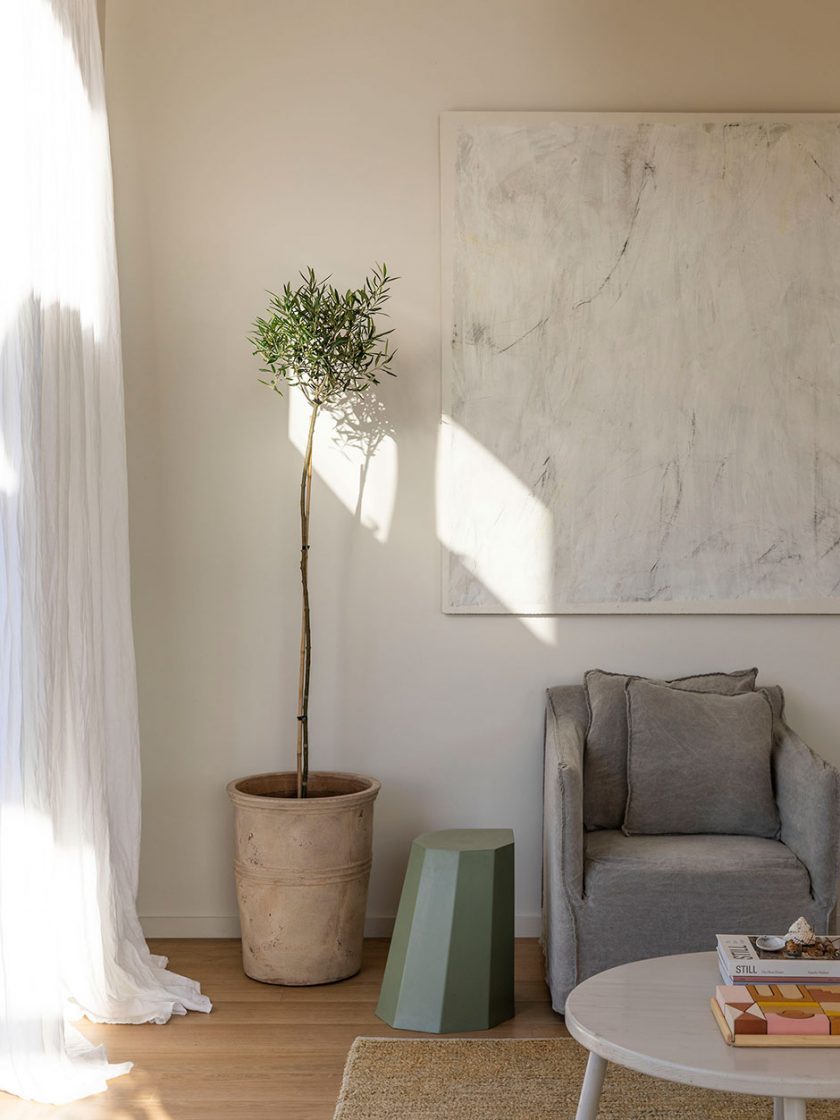 TOP Chelsea landed on light-blue tiles for the kitchen (and laundry) — a less-pricey choice than more-popular white. The cabinetry was also made with huge savings. “I wanted the warmth of timber, but all the options we were offered were expensive, so we chose to piece together bits and pieces instead, using base cabinets from Bunnings with plywood-veneer fronts that we measured and had cut by a joiner in exchange for wine.” The island was crafted from repurposed office furniture John had welded together for use at the winery; Chelsea achieved the textural finish on the front with half-rounds of dowel. ABOVE This large-scale artwork in the living area is one of Gene’s.

In keeping with the ethos of the build, the home is minimally decorated, guided by one of Chelsea’s favourite quotes, from late British textile designer/author/poet William Morris: “Have nothing in your house that you do not know to be useful or believe to be beautiful.”
“Obviously, that’s not always possible, but I try,” she says. “I love vintage and the simplicity of Scandinavian design, and I am a bit of a minimalist, so I don’t have much that’s not functional.”
The pared-back nature of the spaces themselves means the family can repurpose them when the mood strikes. The girls choose to sleep solo or bunk down together, Chelsea’s workspace has moved from A to B, and she and Gene recently relocated from upstairs to the downstairs bedroom in preparation for the baby’s arrival. 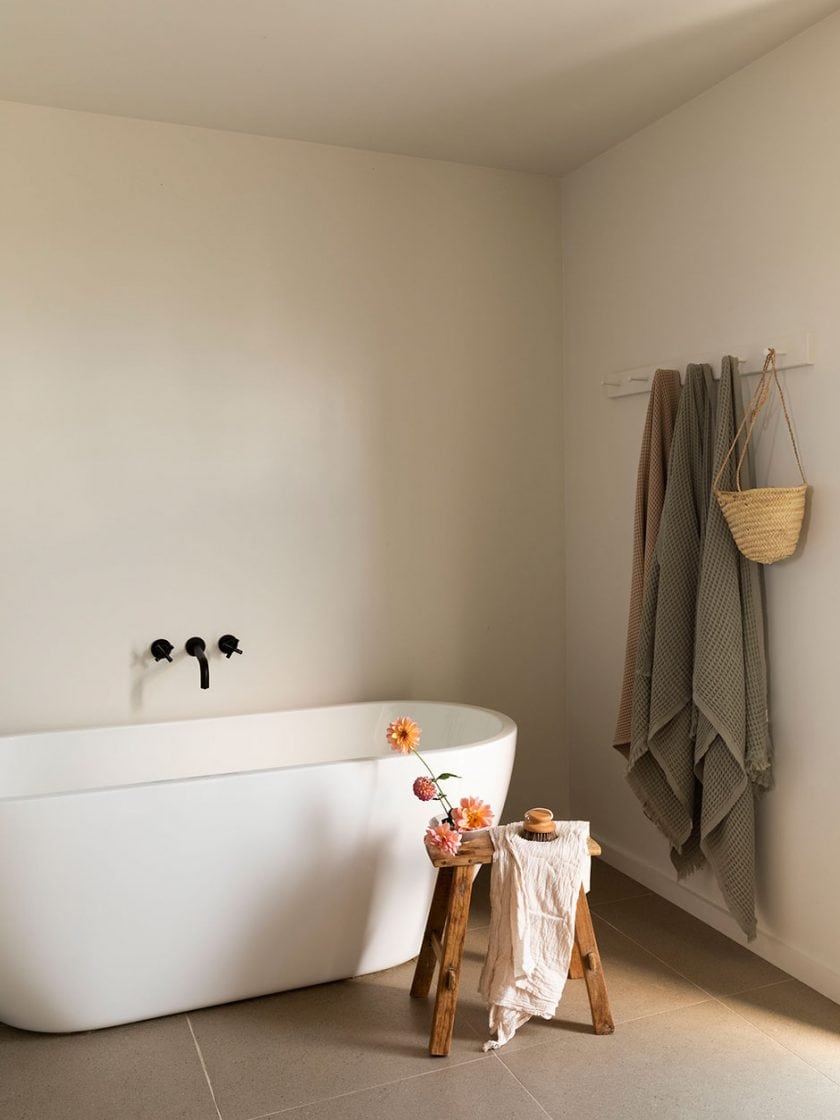 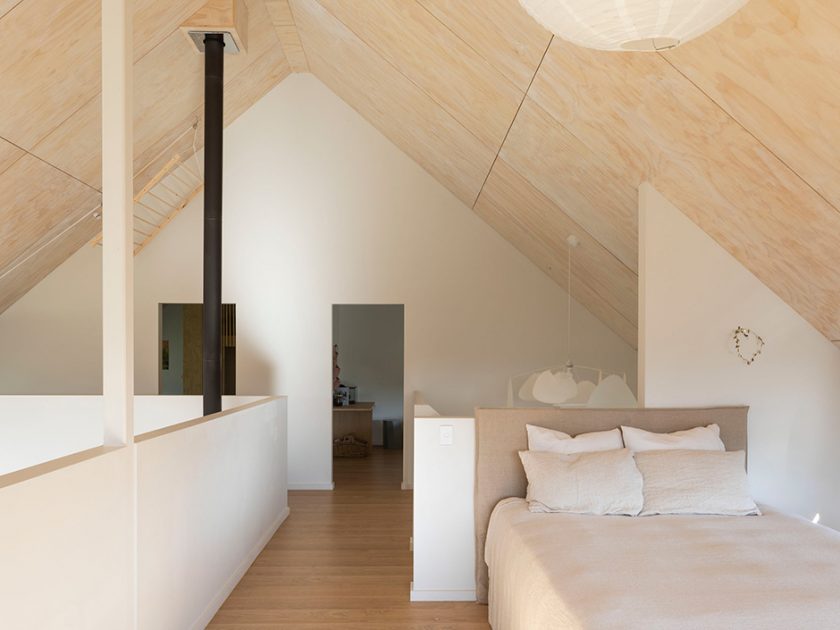 TOP The bathroom features tiles bargain-hunter Chelsea scored for less on Trade Me, including 6m2 of handmade tiles (not pictured) that had been stored in someone’s shed, which she bought for just $1. The Chap tapware by Progetto is from Mico, the Vogue Zurich bath is from Trade Depot, the stool is from Isla & Olive and the peg rail is from Bunnings. ABOVE “The void allows our not-very-big house to feel very spacious,” says Chelsea of the hero design element, which soars up to the mezzanine. “The openness allows us all to have our own spaces but with a sense of togetherness — and I’m a fresh-air freak, so the air circulation is amazing.” Now they’ve got their house sussed, the couple are in the process of converting a container into a studio for family and friends to stay in — and to rent out on Airbnb.

Shaped by the family’s lifestyle and values, the house is in turn shaping them, working wonders on their wellbeing. “Even though we’re five minutes from the local village, we can escape into our own little world here,” says Chelsea. “I love being at home with the sun shining in and music playing in the background, while the girls craft and draw at the dining table, and I cook a meal or bake. These are the kind of days I dreamed of.” 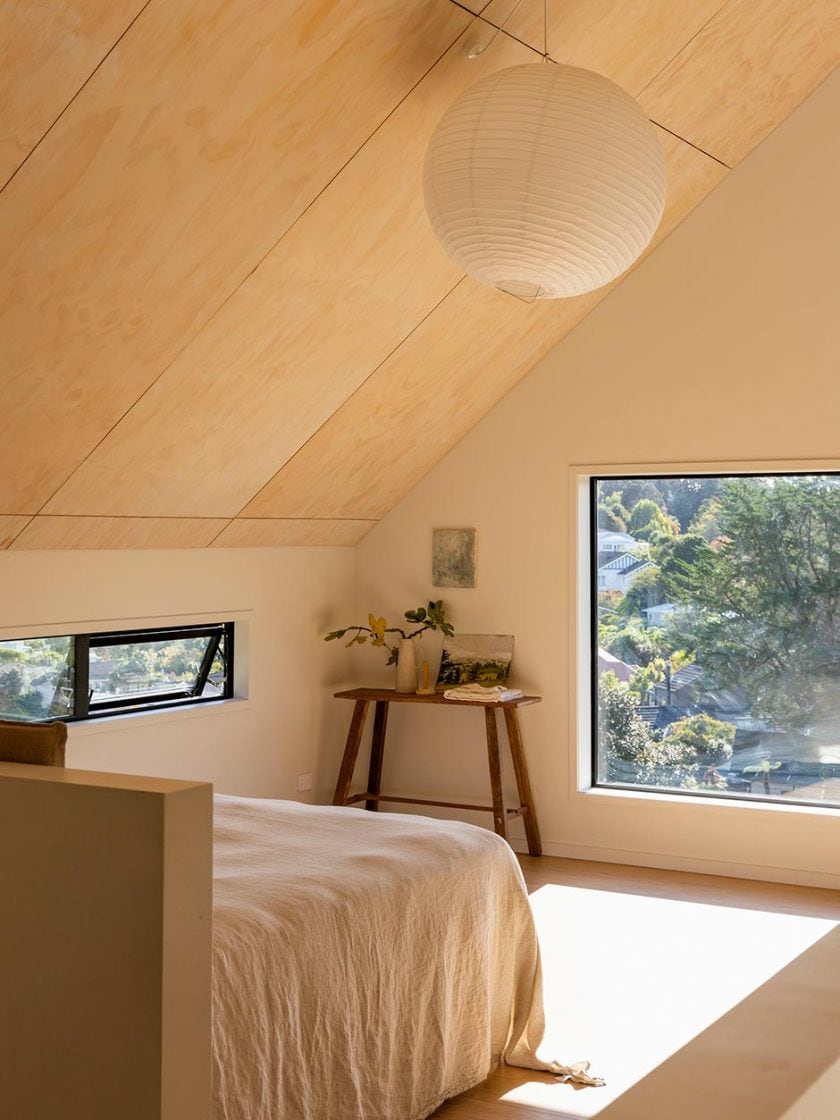 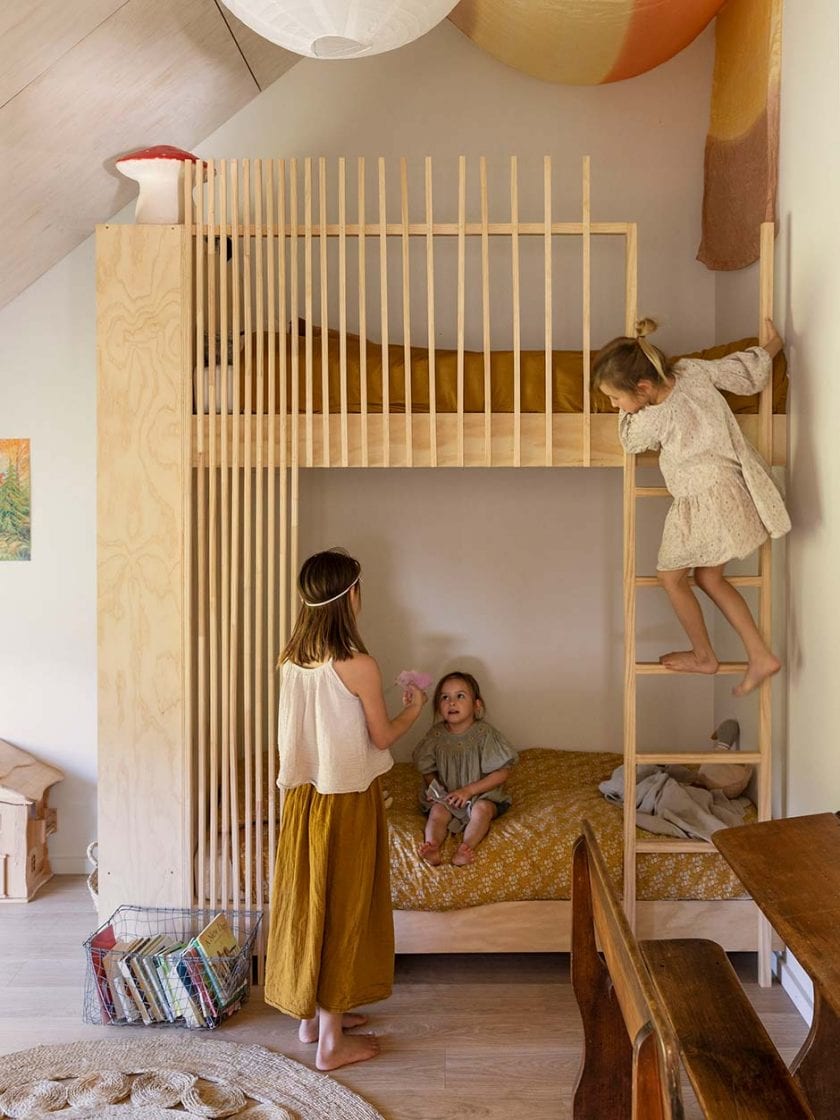 TOP “We rearrange our rooms all the time,” says Chelsea, who spotted this side table at Isla & Olive. “We decided not to put wardrobes in at the beginning because with spaces shaped like these, you don’t really know how you’re going to want to live in them. Not having anything fixed let us figure it out and move things around without too many issues.” ABOVE “When rooms have ample height but not a huge square footage, it’s important to find little solutions,” says Chelsea. Aiming to create more floor space in this bedroom, she designed these neat bunk beds, then put them together with Gene.

This entire build has been about family — a beautiful thing if ever there was one. With a mountain on their doorstep to tame, it’ll be a life-long project, one that’ll see their collective roots grow deeper with the passing years, just like that wise old gumtree’s.

PreviousDesign your future kitchen with Annique Heesen of Gezellig Interiors