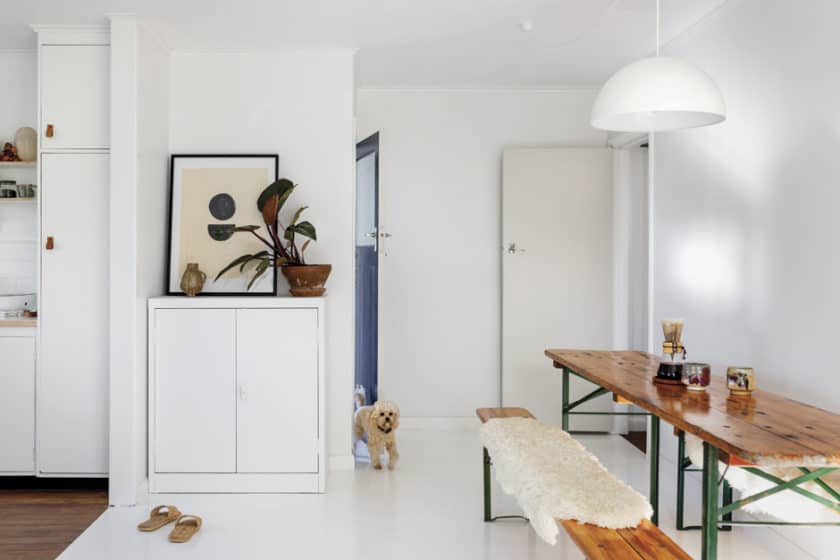 A couple of urbanites up sticks to restore a rundown former rental for a song.

“It was horrendous!” When someone says it not once but four times during a conversation, you’d better believe it. Though looking at the home Gem Adams renovated with her husband Nathan Speeden, you might need a little convincing – it’s so completely lovely it’s hard to imagine it ever being anything but. 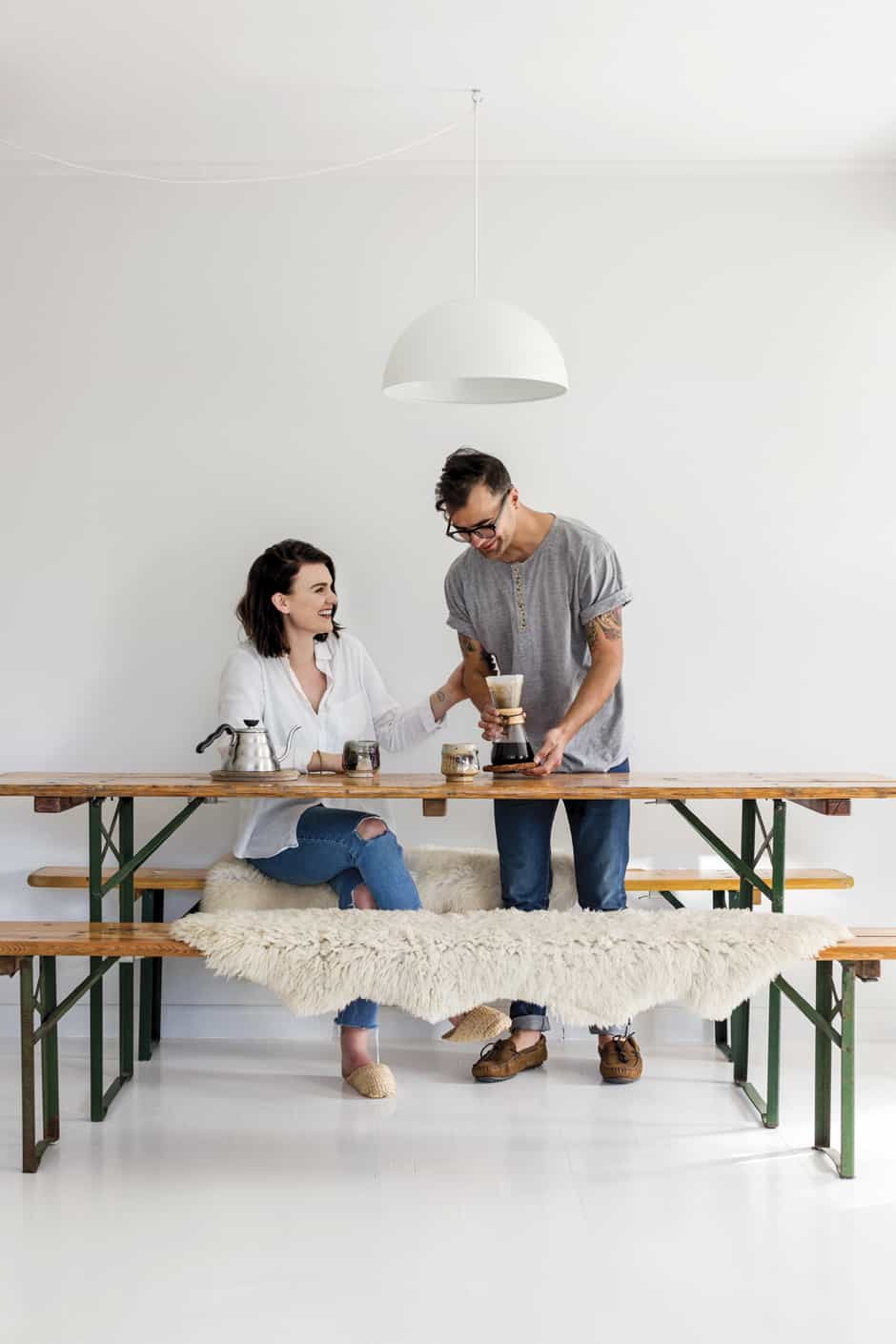 The couple’s road to reno began with a move from Auckland to Hawke’s Bay. Putting on hold the slower pace they hoped to adopt, they immediately threw themselves into a DIY do-up on a house chopped in two and trucked down from the Waikato. 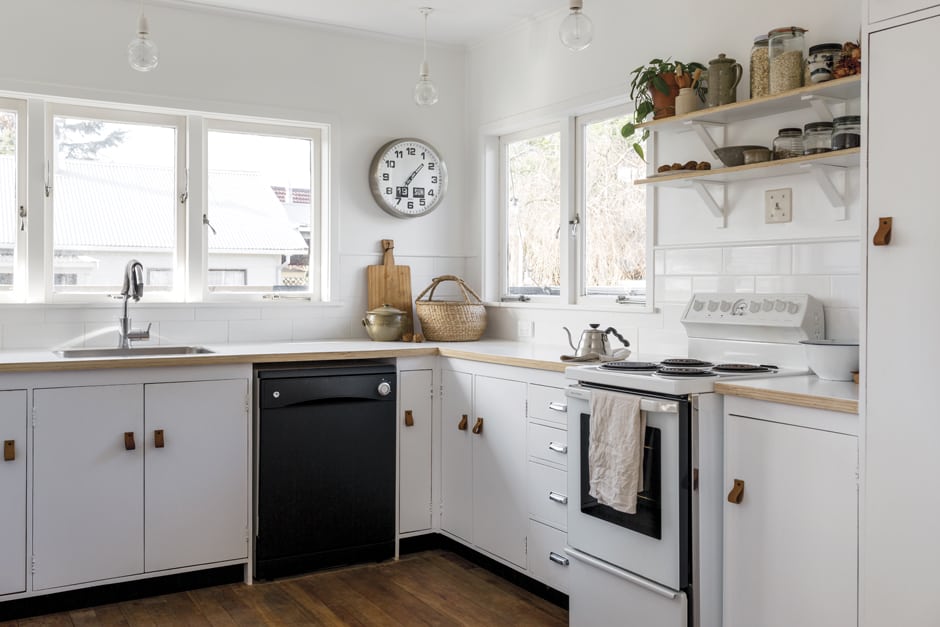 ABOVE The couple made good use of plywood for their benchtop (painted then sealed with Resene Uracryl GraffitiShield), cabinetry and shelving. “Plywood is a really cost-effective, good flat timber that comes in big sheets that you can use to make a lot of things, and make them look interesting,” says Gem.

A three-bedroom 60s number suffering from neglect, it was hardly a job for rookie renovators. Highlights included faux brick panels on the exterior, and inside green carpet, yellow wallpaper, blue lightshades and terracotta, maroon and navy drapes were just the beginning. With no power or hot water, an old door as a ramp to access the house and a jagged cut down the middle of the lounge, it was a back-to-basics business. But with their builder fathers and equally crafty mothers in town to guide them, and friends to pitch in too, the adventure began.
Step one was the master bedroom. “We bowled that first room as fast as we could,” says Gem, a stylist who with Nathan owns lifestyle-stuff store Blackbird Goods. “It used to be the lounge, so it’s massive, and we built a great big wardrobe that has hanging space, folding space and little crates that go in it, so it’s now quite a luxurious space.” 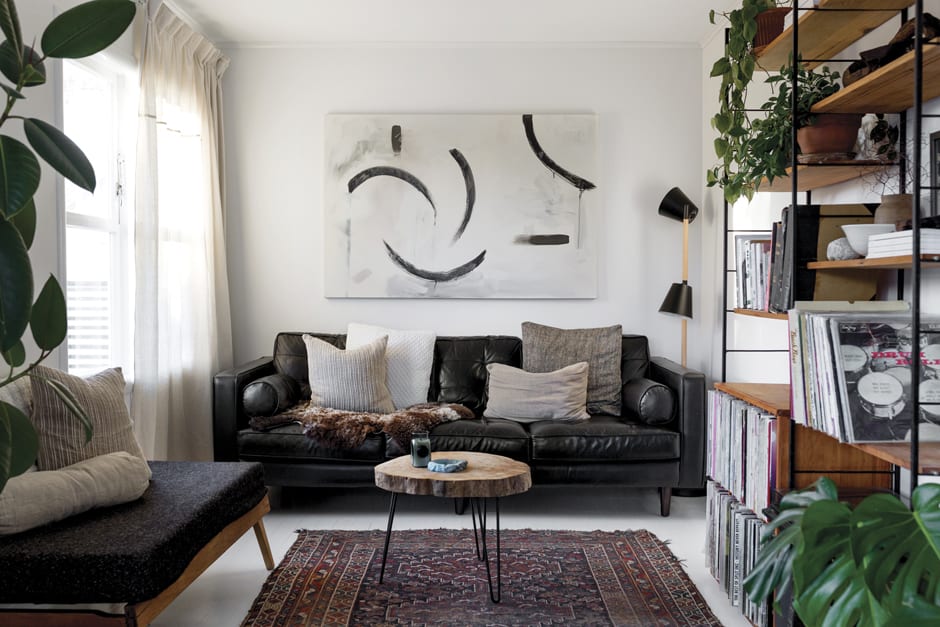 ABOVE “I’m a believer that those core things – your rugs, your couches – can be relatively classic and cost-effective, but the finishing touches that you fill that bookcase with are what bring your house soul,” says Gem. “And plants or flowers – get something living in there.”

Discovering matai floorboards beneath the lino was an early triumph, though Gem’s keen eye (and response to the patchwork effect left behind by the move) saw them painted white
in the lounge, dining area and office, something she had to convince Nathan the wisdom of but now considers one of the home’s best bits.
“Our overall mantra was, ‘Let’s just work with what we have and try to make it better,’” says Gem, “apart from the bathroom, which pretty much got ripped out.” With a bath that had sunk in transit and was duct-taped to make watertight, stained blue plastic walls and an inward-swinging door that made the 3m2 space even tighter, there was work to be done, but the savvy duo spent just $800 – chiefly thanks to keeping the original layout and plumbing in place. A bath and basin bought on Trade Me, but in pristine condition, and DIY everything else completed the picture, the big design coup an old tongue-and-groove door they rescued from the wrecker’s and hung on castors so it slides, not swings.
In the laundry it’s all in the detail: moody blue walls, moss green floors to match the bathroom, and clever extras like the heavy salvaged concrete tub and Gem’s shibori-dyed ironing board cover and laundry bag. 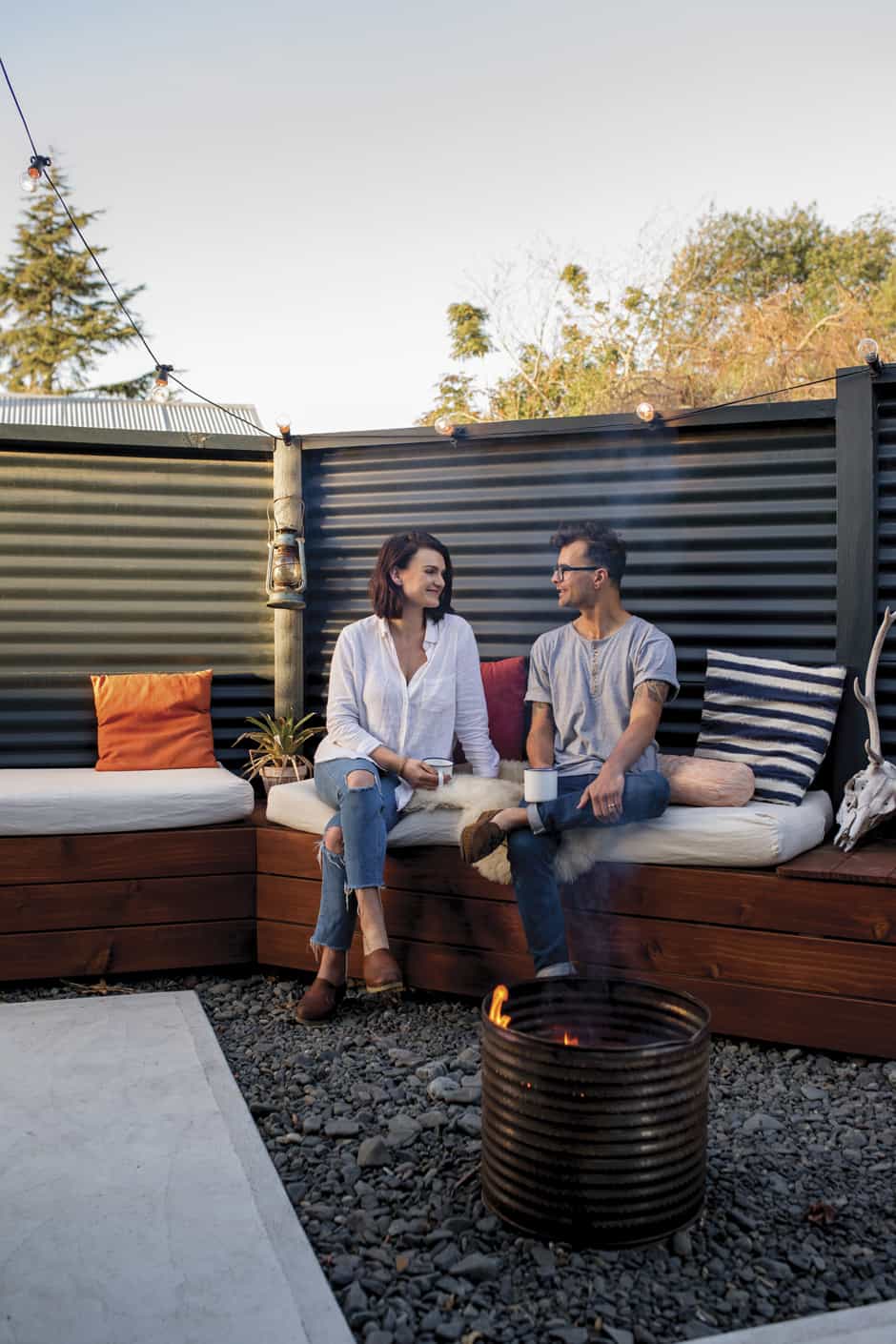 ABOVE A thoroughfare out the back was converted into a cosy nook complete with a fire pit made from an old washing machine. It’s become Gem’s favourite place. “First thing in the morning, sitting on the stoop with the husband, the dog, a cup of tea and the sun pouring in – that’s my spot.” 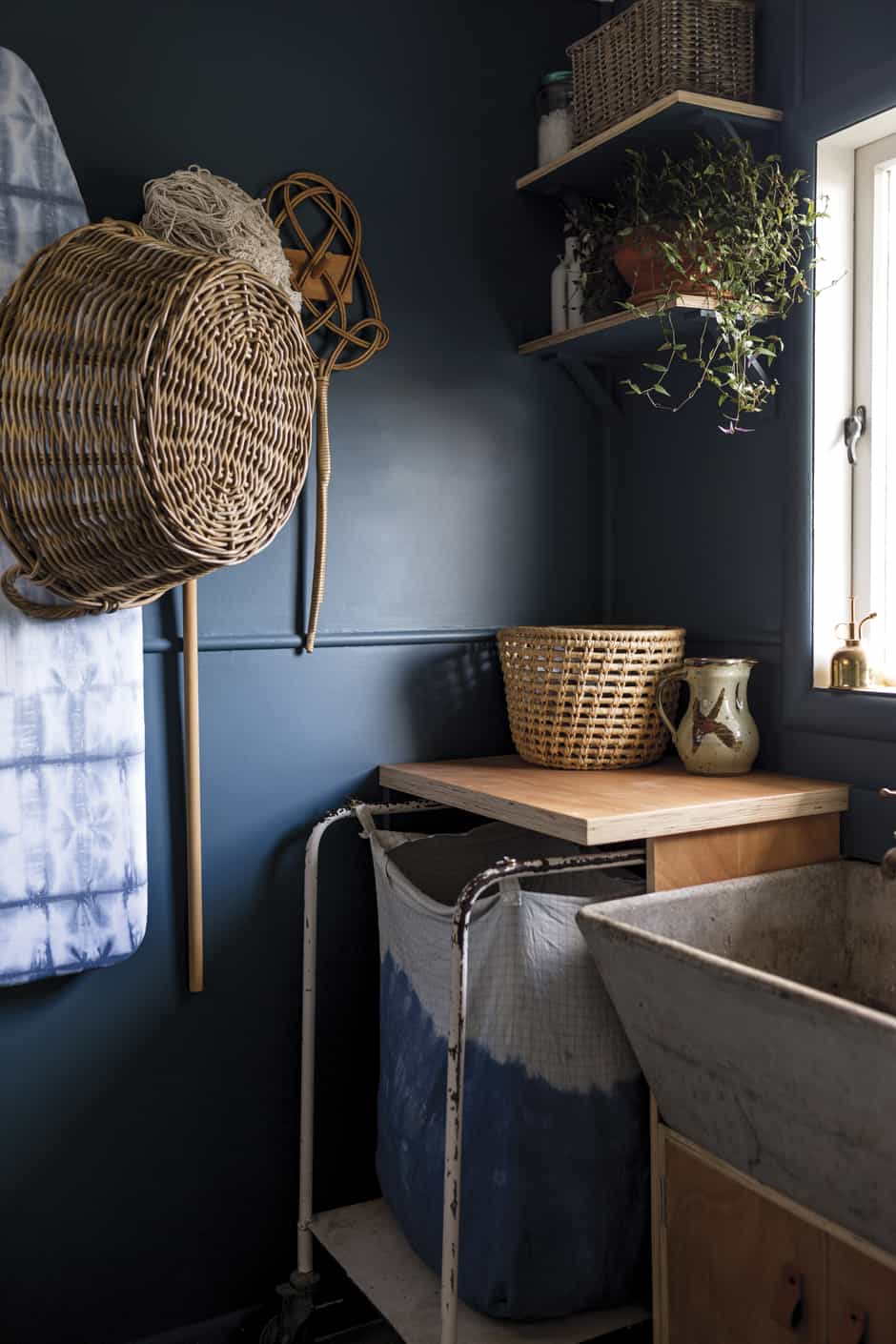 ABOVE No one said renovating was glamorous, and Gem will be the last to tell you it even comes close. “We were grouting on a hot summer’s day, standing in the tub, covered in grout with sweat pouring down our arms – it was ridiculous but so fun.” Greenery in the bathroom and laundry complements the floors in Resene Smoky Green and laundry walls in Resene Atomic 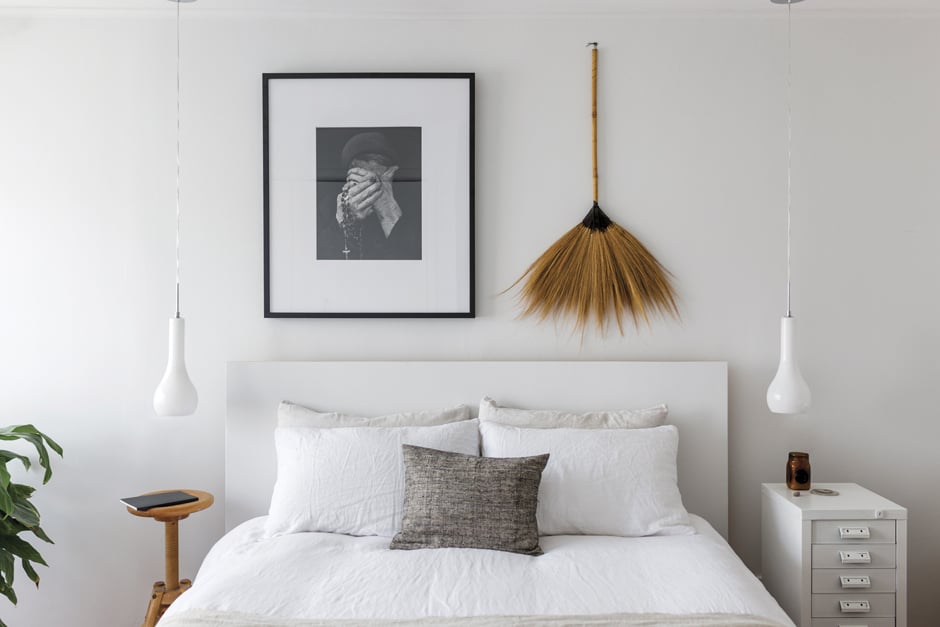 ABOVE In the master bedroom, a potter’s stool becomes a side table. The Southeast Asian broom is another op shop treasure. 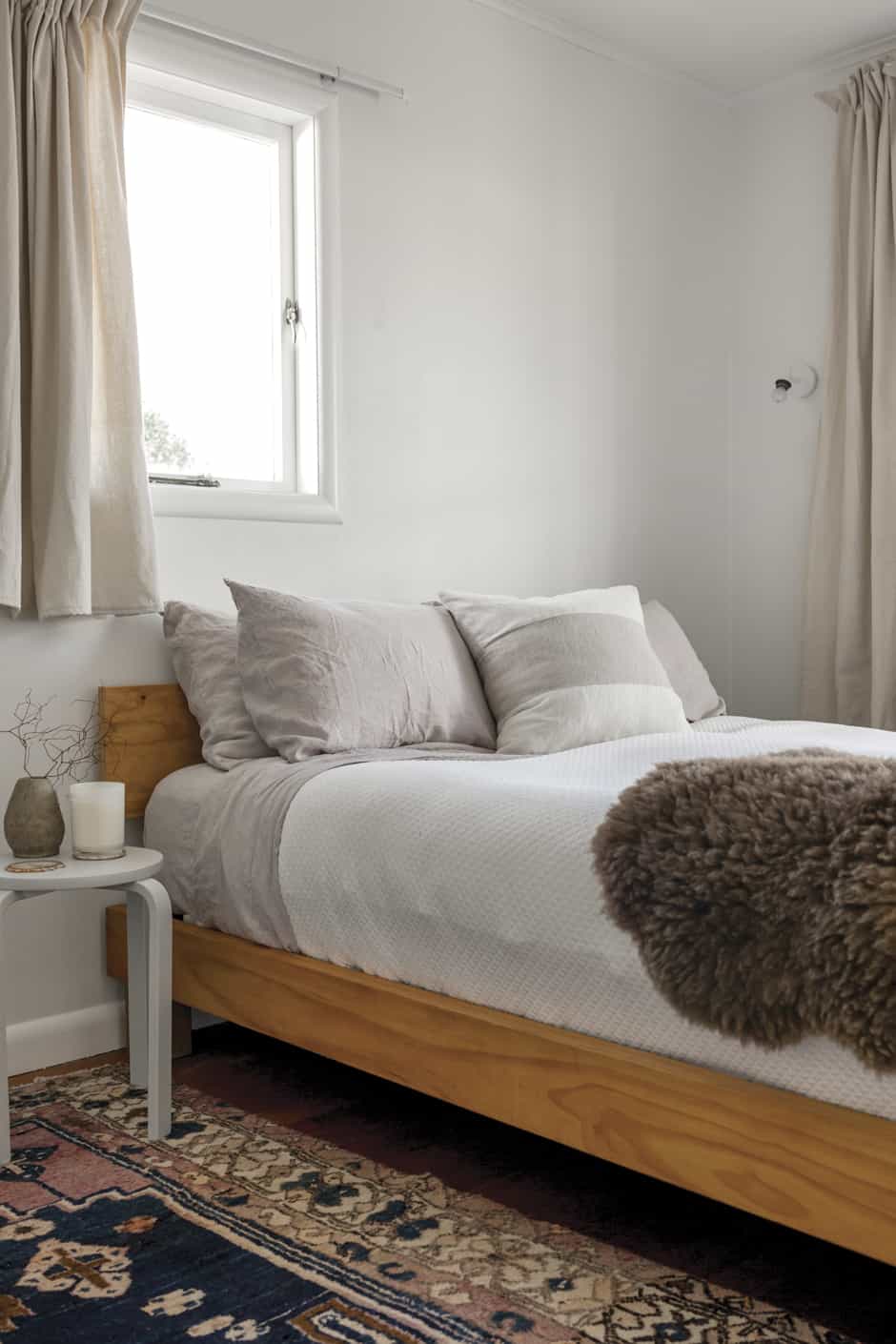 ABOVE “We wanted to create a haven for our guests,” says Gem of the spare bedroom. “Things like a candle, a little card with the wifi password so they don’t have to ask and the option for soft or firm pillows make them feel comfortable and at home.”

Meanwhile, the kitchen “had great bones and I just wanted to give it a freshen up”, says Gem. Cue paint, plywood cabinets and benchtop, a tiled splashback, new lighting, a junkyard sink and a Trade Me goose-neck tap, plus the leather handles also seen in the laundry, which look luxe but required little more than a call to Lapco to order the leather for a steal. The original appliances came up beautifully with a bit of elbow grease and blackboard paint on the fridge and dishwasher. All for under $1000. 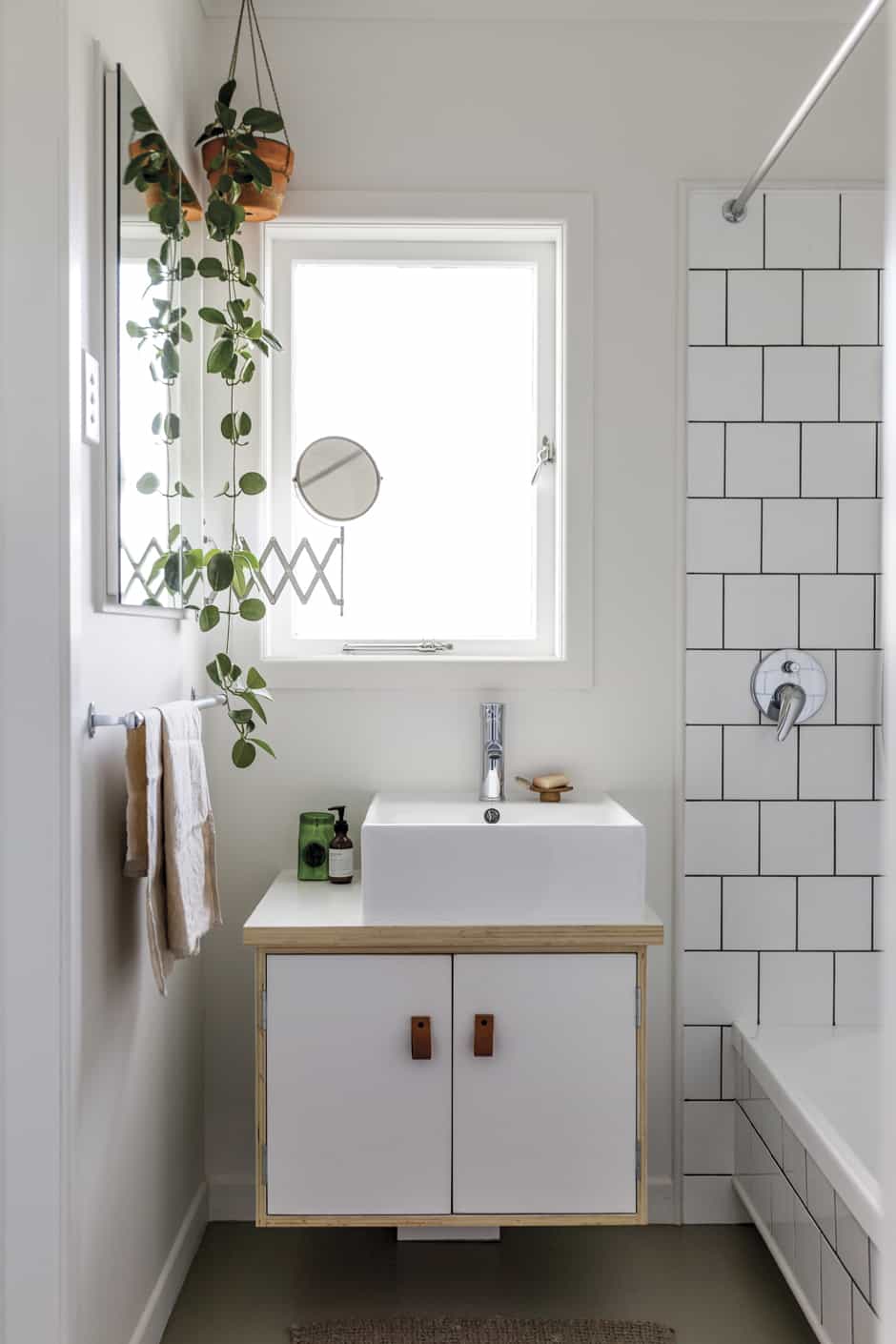 Thrift stores, garage sales and whatnot were key to keeping costs down – and adding character. “Trade Me and wreckers’ yards and making things yourself – it’s really rewarding in the end,” says Gem. “Go for cheaper tiles. Don’t change a whole lot of lighting. We painted, sanded the floors and learned how to plaster, and small tiling jobs aren’t super hard if you can figure out how to do a straight line and YouTube how to do it, plus people at Mitre 10 are always happy to give you advice.”
Today that horrendous house “has just come so far. This is me on a limited budget, but I’m proud of it for what we were working with. We’ve put our heart, soul, blood, sweat and tears into it. It tells the story of what our lives have been over the past few years – and that’s kinda cool.”