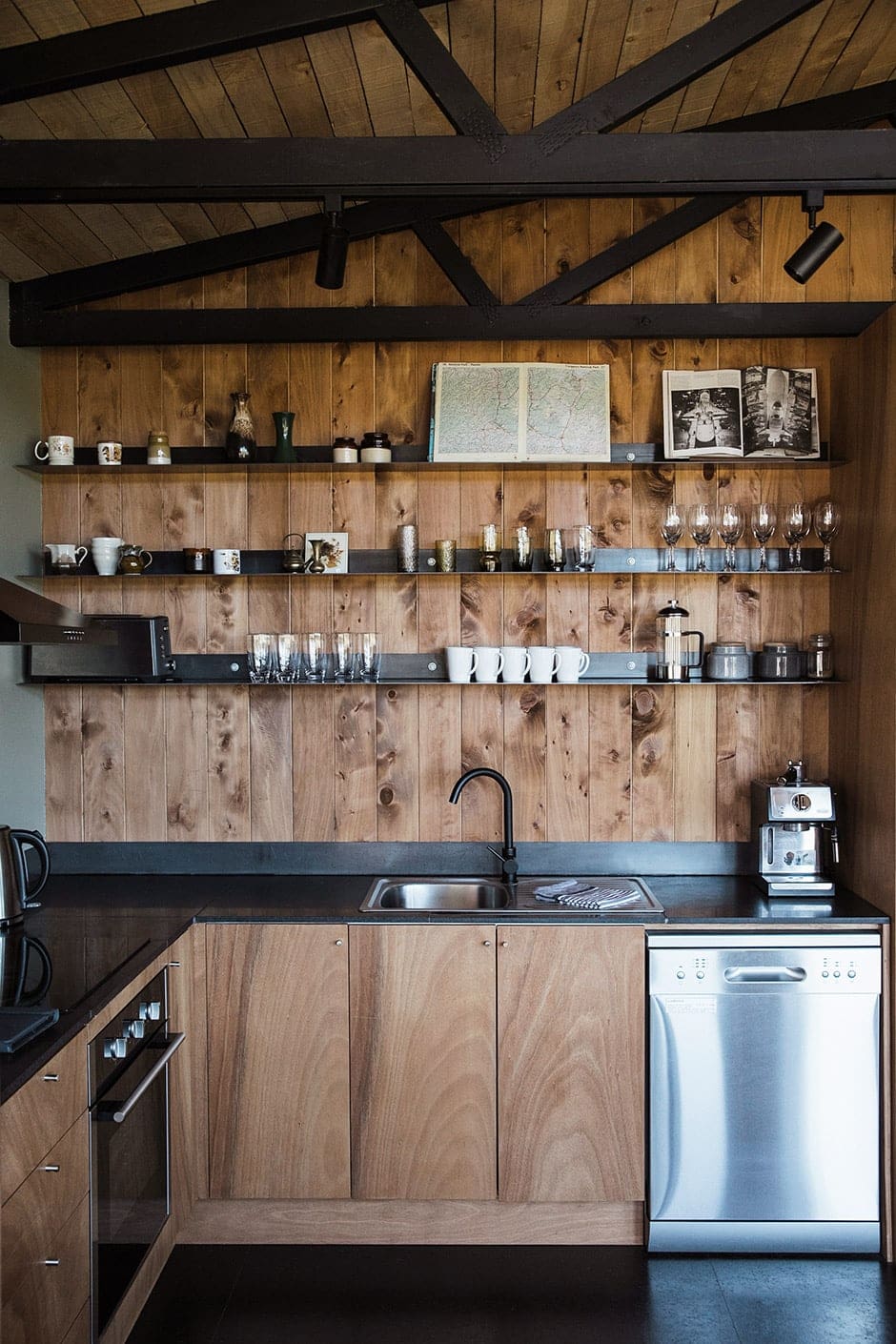 Two Auckland pals prefabricated these huts, then put them on trucks. And now you can rent them out.

Long-time friends Sam Parkes and Fraser Horton, both keen surfers and “average” snowboarders, set out on a new adventure together when during a surfing session they conjured  a vision to create two holiday homes in Ohakune, somewhere they’d spent many happy times with friends and family over the years. One site in the new subdivision they had their eye on had a view of the mountain, the morning sun transforming snowcaps to pink frosting. The other faced golden paddocks filled with the whispering dry grasses of the central plateau.

Sam and Fraser share sports and an attitude, so the collaboration was both natural and astute. Building two holiday homes at once meant they could achieve economies of scale but, really, it was the meeting of minds that paid off. 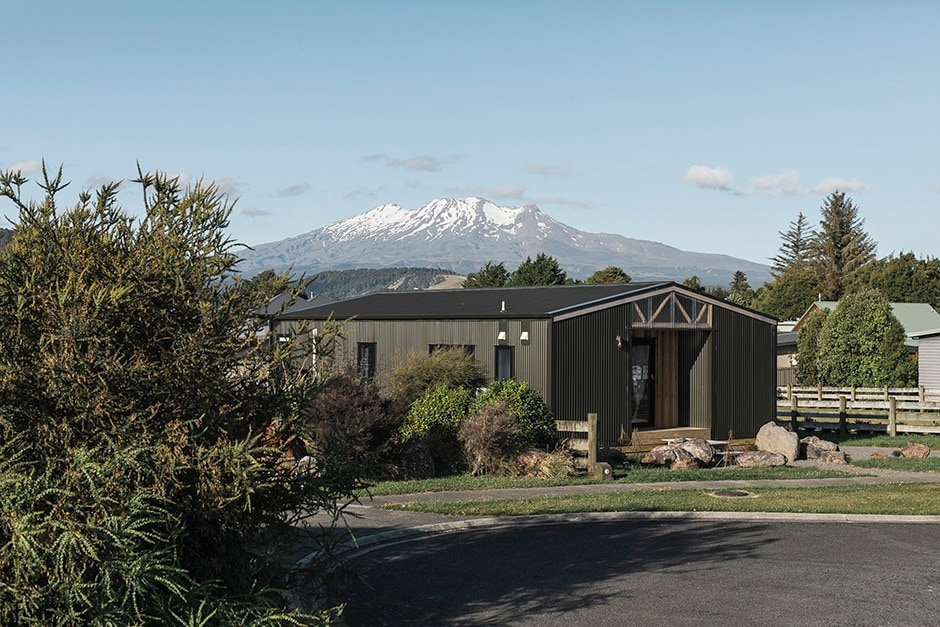 MAIN IMAGE The open shelves in the cabins’ kitchens (this one is Redrock’s) are custom-fabricated from mild steel with a beeswax finish and hold a collection of Sam’s op-shop finds — most of them discovered when travelling between Auckland and Ohakune. ABOVE Snowmass has a peaked gable roof that echoes the shape of Mt Ruapehu. Its corrugated-iron cladding in Karaka by Steel & Tube blends in with the environment, and the entry vestibule is lined in cedar shiplap clear-sealed to weather naturally.

Sam had drawn up a couple of sketches for a cabin he based loosely on a DOC hut. “I wanted something simple but beautiful, with an effective use of space,” he says.
Fraser, an architectural designer, was the key to turning this broad thought into workable reality. “The overarching design mentality was to take a simple and attainable shell, and fill it with layers of richness and character,” he says. He looked at every detail and how it would typically be done, then asked, “How can I keep the cost the same but make it special?”
Designing the two huts, which they named Redrock and Snowmass, within small footprints (one is 85m2, the other 95m2) was pertinent to the plan. Prefabricating them in Auckland bypassed the problem of inefficient travel back and forth from home to site and allowed a more hands-on approach to the project management. 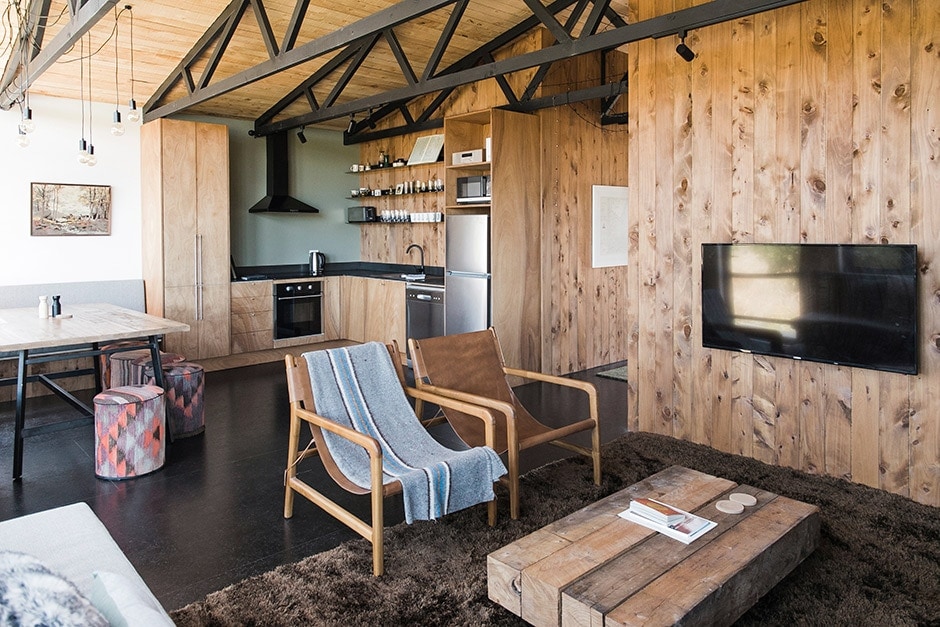 ABOVE Fraser and Sam carried out most of the interior styling, with Hannah acting as a sounding board. Since the build, she’s been crucial to the operation in the management and marketing of the huts as short-term accommodation. In the main living area at Redrock, where layered texture is king, Harry sling chairs from A&C Homestore are teamed with a low coffee table made from some old macrocarpa posts.

With the gumption and energy of youth, they leased a warehouse in West Auckland and embarked on the construction of buildings, for which the transport restrictions dictated the dimensions. “The fact we had to put each one on the back of a truck is what informed the size of the design and the pitch of the gable,” explains Fraser. Elements that arrived on site (such as pre-nailed timber framing and corrugated iron for cladding) were put together by a builder team, but the duo helped out, laying cables and pipes, sealing floors, and painting and staining too. 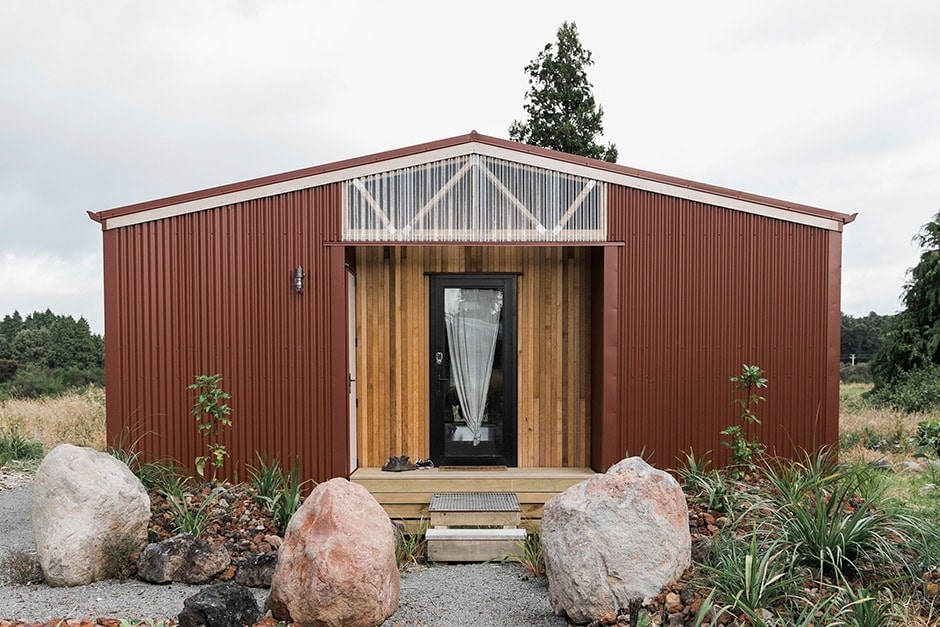 ABOVE Redrock is clad in the same corrugated-iron roofing material as Snowmass, but this time in cheerful Scoria. The boulders here were originally located on nearby farms, buried in the soil; a local digger driver was called on to carefully push them into place.

Soon the finished shells were ready to hit the road. “Getting the huts through the door of the warehouse was like giving birth,” recalls Fraser’s wife, Hannah. “The clearance was millimetric.” A nervous few hours followed as they made their way through the night…
The labour pains of that day are forgotten now that Redrock and Snowmass are settled into the landscape. The whole team worked hard to finish the interiors, installing the modular kitchens and gathering the furniture, fabrics and artworks that evoke a Kiwi take on the Scandinavian concept of hygge. 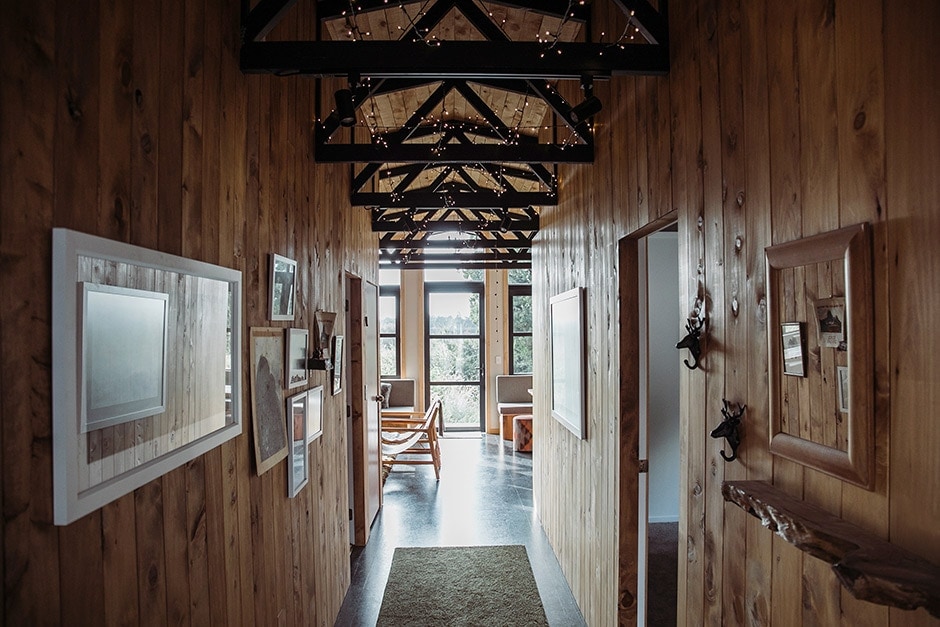 ABOVE Fraser worked hard to ensure the triangular trusses form an arch in each hut’s central hallway. Enhancing the bach-like aesthetic, the timber-lined walls are home to a charming mishmash of artworks.

Arriving at either of these cabins is like a homecoming after an arduous tramp. Step off their gravel paths onto their steel-grated walkways (with allusions to that DOC hut) and the shelter of an entrance porch, then kick off your shoes — because from now on, the experience becomes a little more luxe.
A wide hallway based on the layout of a villa runs beneath a rhythmical triangular arch of exposed timber trusses, a design manoeuvre that makes each cabin feel spacious and just a wee bit grand. Bedrooms lead off the hallway and the living space at the end is the ultimate zone in which to relax and have fun. “We wanted a good vibe — to have the sociability of a café,” says Sam. 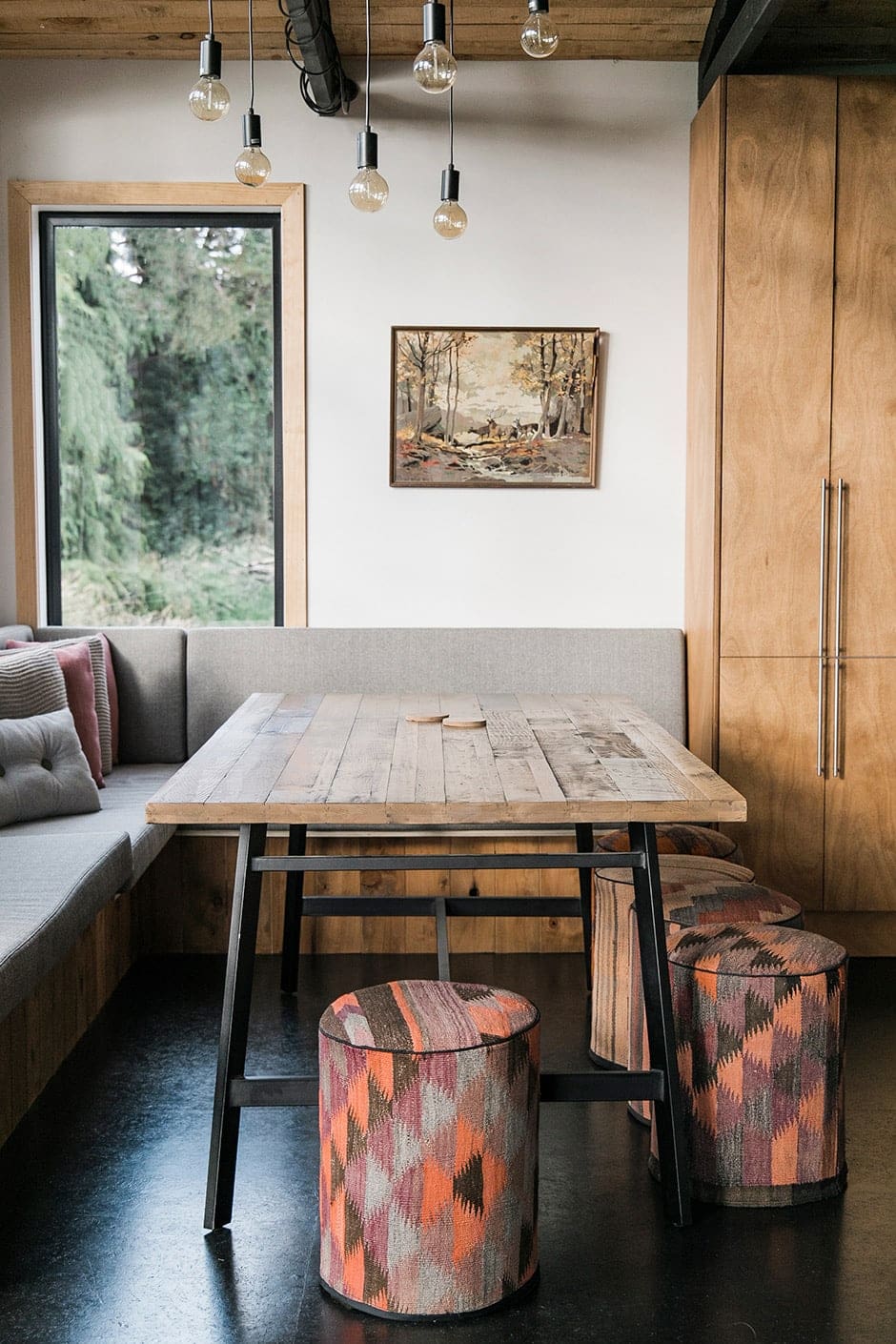 ABOVE Trade Me finds have also been used to good effect in Redrock’s dining nook, like the rustic timber- and-steel-framed table and group of six bare-bulb pendants that are wound around the exposed trusses.

Undoubtedly, it’s the personalised touches that make it feel so. In each kitchen, the open shelving in waxed mild steel was custom-fabricated, fine basalt tiles deep enough for worktops provide the unique beauty of natural stone, and the gaboon-ply cabinetry is warm-toned and adheres to the co- owners’ ‘as authentic as possible’ rule.
Walls lined in macrocarpa emit a spicy fragrance that adds to the ambience of the living rooms, where the floor space was maximised by pushing built-in bench seats to the edges, the perfect spot for a cup of cocoa or something stronger après ski or a Tongariro hike. Kilim stools can be stored beneath each dining table when not in use, and the duo also made coffee tables from macrocarpa sleepers and bedside tables from hunks of the stuff. 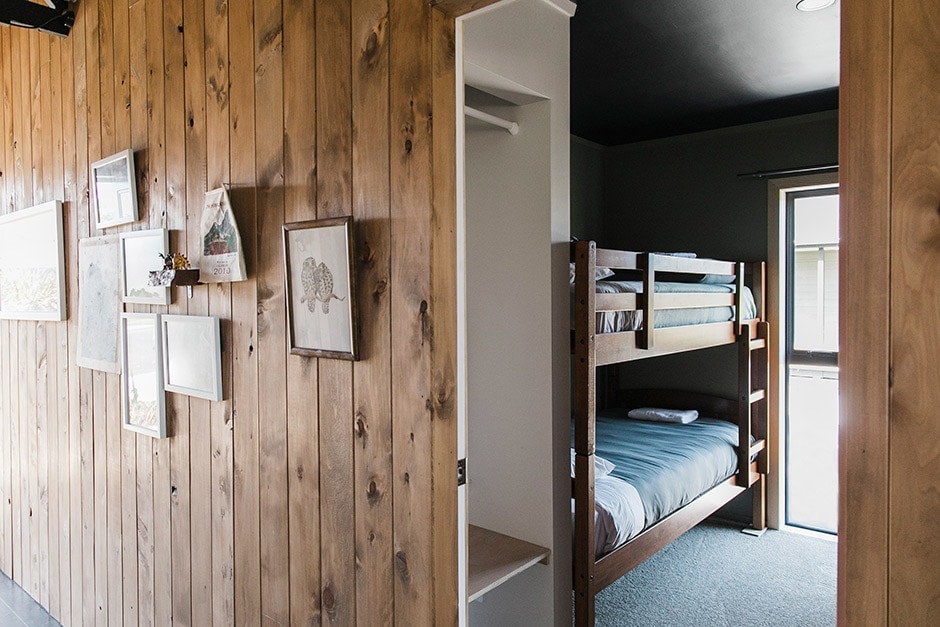 ABOVE A set of bunks bought on Trade Me occupies one of the three bedrooms in the Redrock hut (Snowmass has four bedrooms). Among the items from Sam’s art collection that adorn the hallway is a painting of two ruru created by a friend.

Keeping it real, the floors are dark- stained Strandboard and the curtains are fashioned from woollen blankets bought at an army surplus store, with pop-riveted leather tabs that attach to the rings. The huts’ artwork is inherited or from op shops and includes a photograph of a Ruapehu eruption and map of the Everest Trail that returned as a memento when Sam and his dad took an expedition to that faraway mountain.
Although the Hortons and Sam rent out the huts to daytrippers and holidaymakers on Airbnb, they also spend plenty of time enjoying the fruits of their labour. “We just wanted to elevate typical, affordable architecture at this scale, and to create a special place for people to connect,” says Fraser.