Painter Ayesha Green’s cartoonish portraits have something important to say 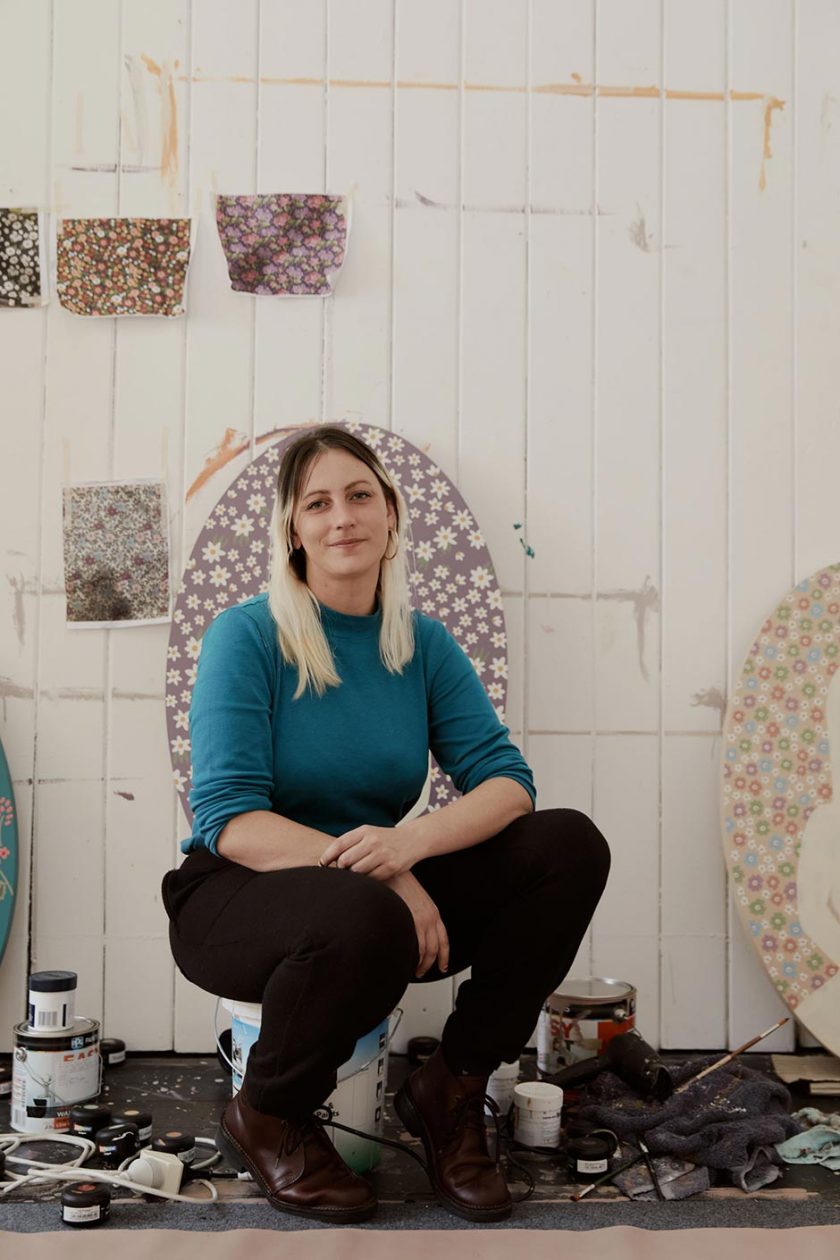 At the top of a winding staircase above a dairy on Auckland’s Karangahape Road sit a couple of unassuming rooms. Once an apartment, they’ve been used as artists’ studios since the ’90s, and award-winning painter Ayesha Green is the latest to create within their walls.
“The first artist to occupy this space was actually [renowned photographer] Ann Shelton and her girlfriend at the time,” says Ayesha. “They slept in one of the two rooms and worked in the other.”
Ann told Ayesha a great story about how they were walking along K’ Road looking for studio spaces and saw an empty spot upstairs. The butcher in the store below owned the building and allowed them to move in, and so the artistic legacy began. 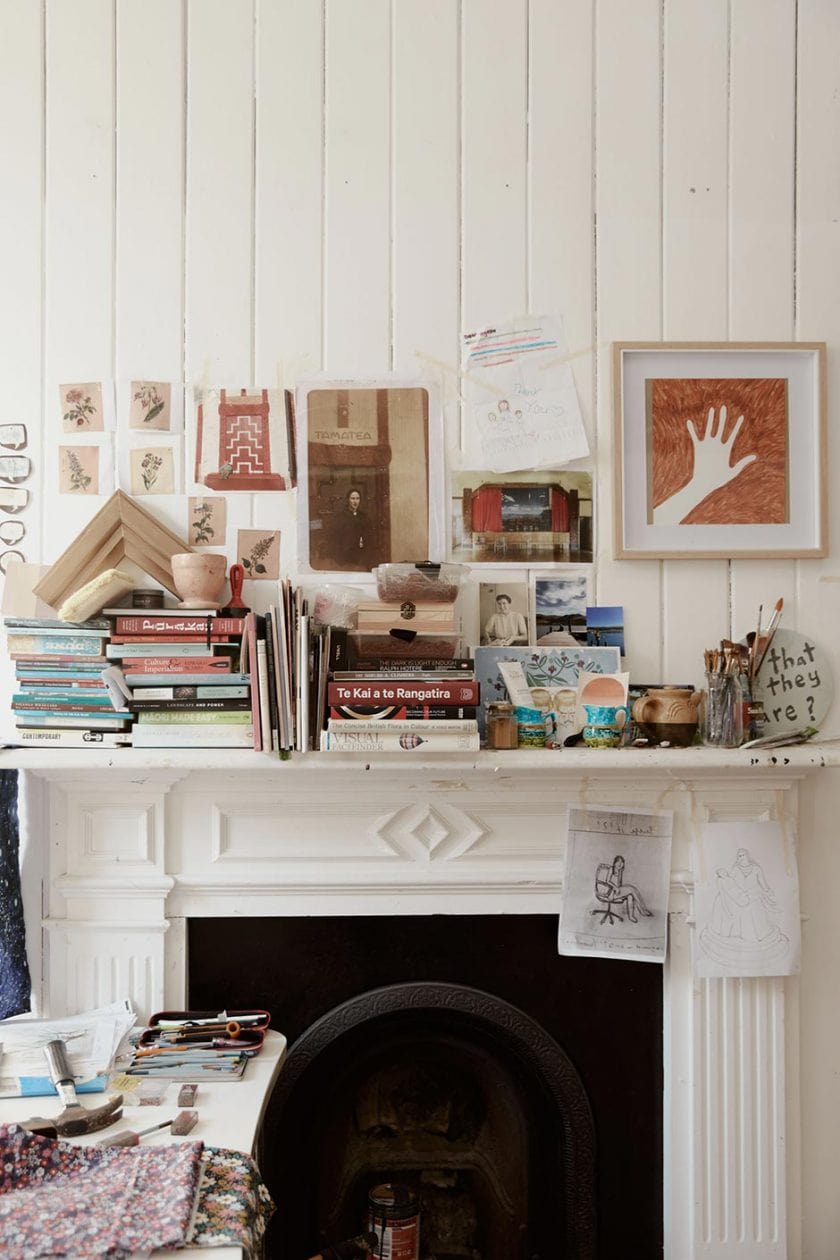 ABOVE Ayesha’s studio has been home to loads of creatives over the years. “I know my friend John Ward Knox had his studio here, and my friends Yolunda Hickman and Johl Dwyer, and Sarah Smuts-Kennedy and Heidi Brickell. So many artists have come through, so I’m really lucky,” she says. She’s made it her own by dotting the walls with research, images of past works, drawings and mementos.

Very happy to be here, Ayesha’s a deep thinker and a natural storyteller, and uses her work to examine themes of nationalism, colonisation and Māoridom. “My painting is about the stories we tell ourselves about ourselves, using painting as a type of visual language that can change narratives of what we might think of ourselves as people within New Zealand, Aotearoa,” she says.
She’s quick to add that it’s in service to her iwi (Ngāi Tahu, Ngāti Kahungunu) “and that service interrelates and acts in two different ways. One is service to the iwi and being able to tell stories of what it might mean to be a Ngāi Tahu and a Ngāti Kahungunu woman. But there’s also another service I do, which is to allow people to see the different ways that Māori might live, or to understand the nation in a broader way.” 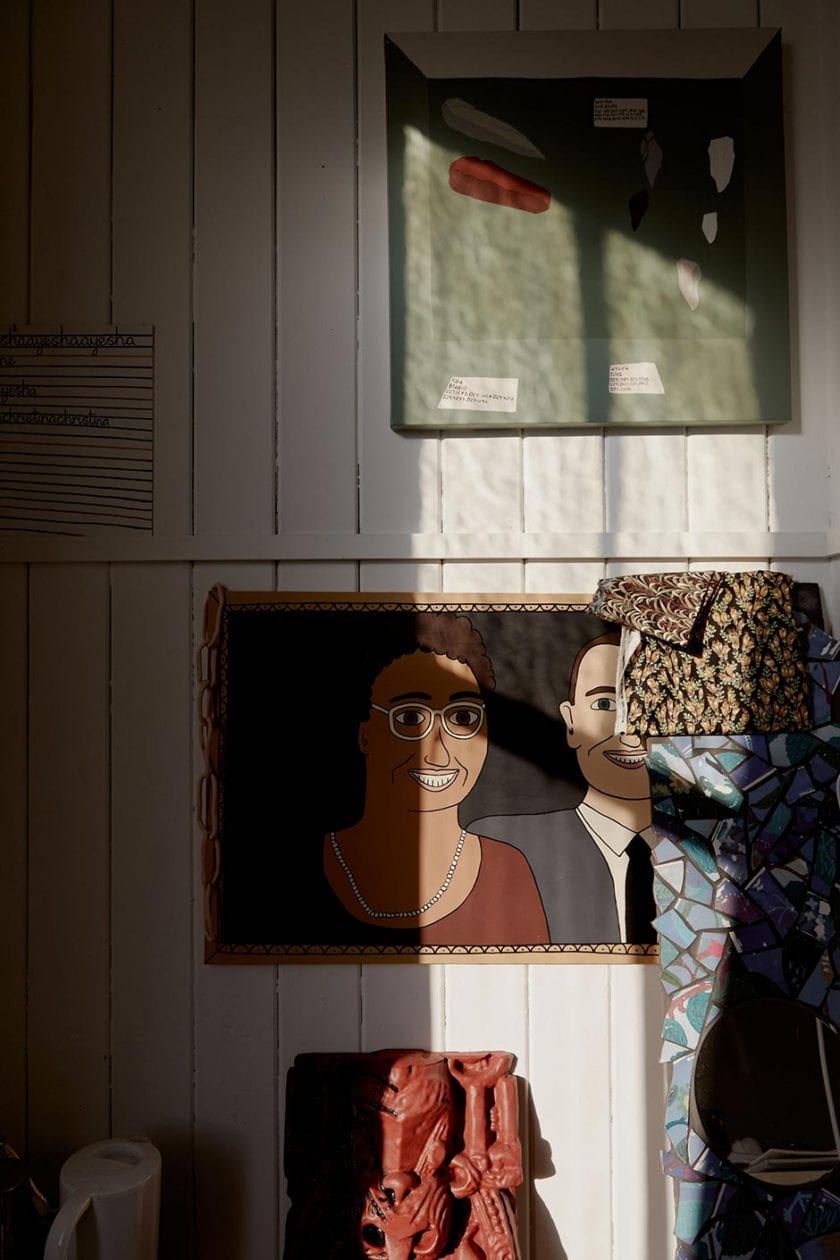 ABOVE “A lot of my work is looking at the role knowledge plays in creating the stories we understand or how we come to know things in the world, and also who gets to create that knowledge and then disperse it,” says Ayesha. Her preferred style is evidenced here by this work from her series Puku, depicting her great-grandparents.

When asked why she paints in such a cartoonish portraiture style, Ayesha says she “sort of just fell into it. What I’ve come to realise is that the art you grow up on is what informs your future work, and the art I grew up on was cartoons in the morning before school, cartoons after school, picture books.
“My dad was a painter and for our birthdays he’d always paint a picture that we wanted. It’d usually be a cartoon, so once he painted me a big portrait of the Little Mermaid. It was really cool and I think that’s had a huge, profound effect on my practice, even though it’s taken me a while to understand that.”

ABOVE Ayesha — who’s represented by Jhana Millers Gallery — was recently awarded the Rydal Art Prize for this painting, All of my Lovers are Immigrants (Smooth my Pillow).

Ayesha’s had a busy year. Her work was in landmark Auckland Art Gallery show Toi Tū Toi Ora and at the Aotearoa Art Fair, and soon after, she won the Rydal Art Prize, a national contemporary painting award that comes with a $20,000 prize and a solo exhibition at Tauranga Art Gallery. She says it was a complete shock.
“That kind of monetary prize is life-changing, and being able to develop a big show for Tauranga Art Gallery is really exciting. These types of opportunities really push your practice forward because there’s room to grow and experiment. I want to do the most ambitious show ever.”
Before that, Ayesha has a show of new work, To the Best of my Knowledge, at Hastings City Art Gallery, opening in August. It explores the Native Schools Act (1867), which she says “uses Hukarere school [in Napier] as a way to think through what education looked like for Māori women at the time of colonisation and how those native schools functioned. 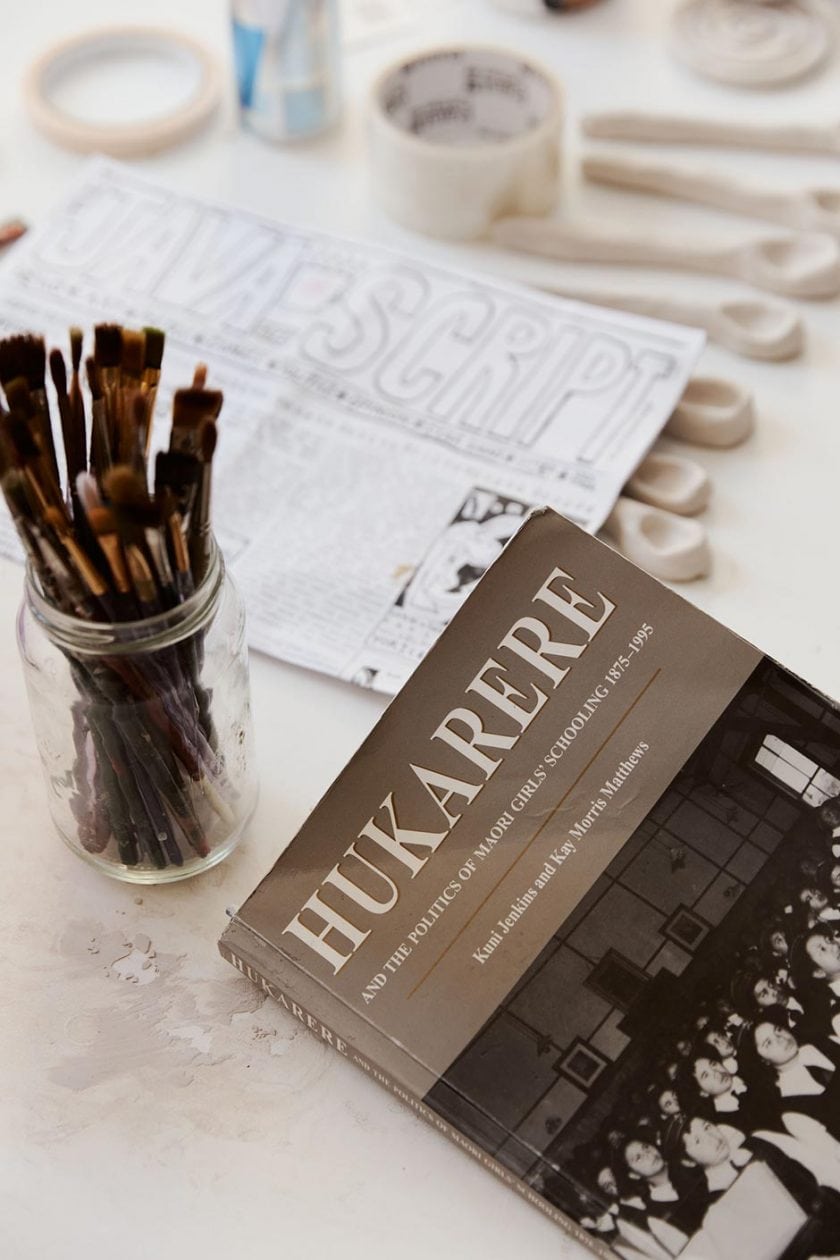 “[At Hukarere] Māori girls would learn how to live and work as Pākehā women, and then they’d get sent back to the kāinga [villages], which were generally in rural areas at that time, and they’d colonise from the inside, teaching the rest of the family what to do. The Crown understood the strength of women in communities, because women are the ones who make the domestic space run and have power in that, so they were trying to use Māori girls to colonise from within. The native schools were set up as Trojan horses.” 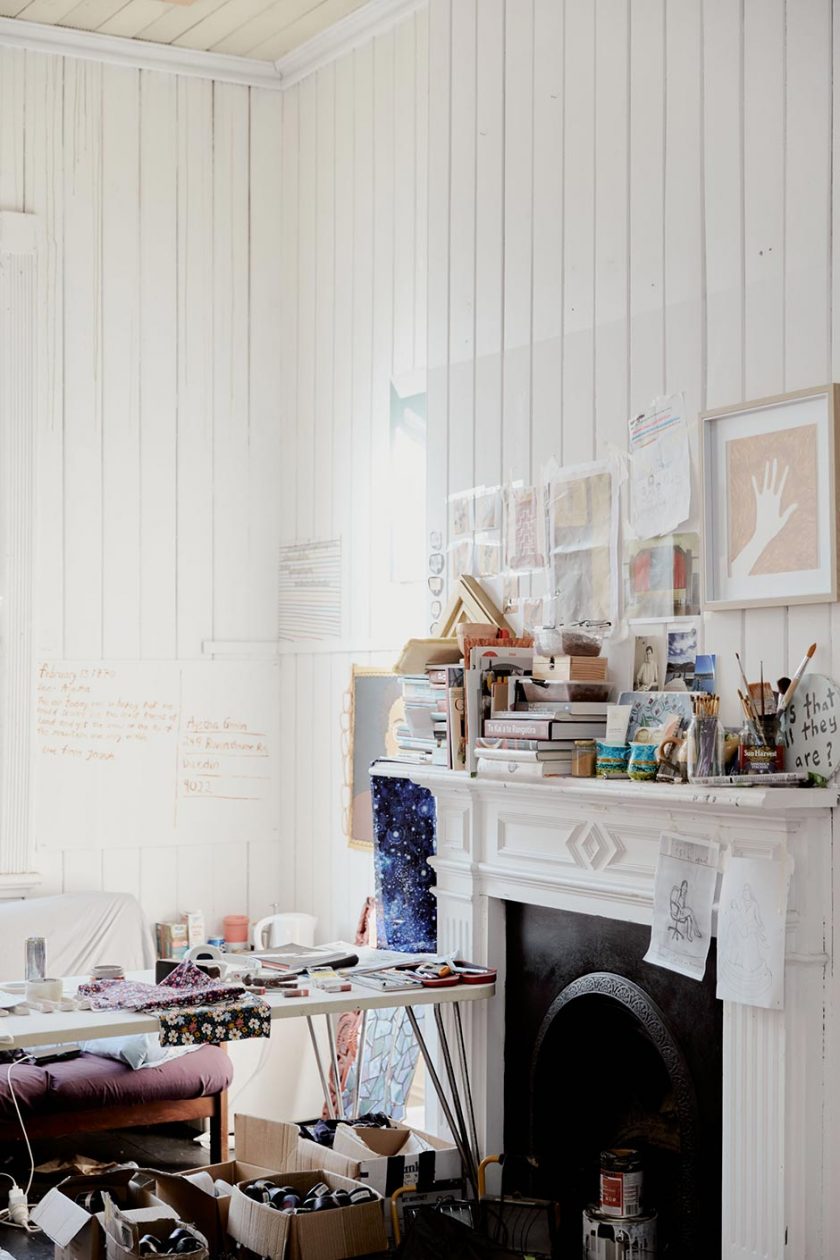 Ayesha says Hukarere students also had agency to change their own circumstances, which they did, starting the kohanga reo early childhood education movement and the Māori Women’s Welfare League. “The Trojan horse flipped the other way and the Māori girls sent out into a Pākehā world then started reinstating tikanga Māori back into it.
“A lot of this show is portraiture of Māori women that acts as an acknowledgement of the work that’s been done,” she says. “I always use portraiture as a way to celebrate the sitter.”
Catch To the Best of my Knowledge at Hastings City Art Gallery from August 14 to November 28, 2021; @ayeshagreen

PreviousHow to throw a throw, woven in with a selection from Weave

NextDesign your future kitchen with Annique Heesen of Gezellig Interiors