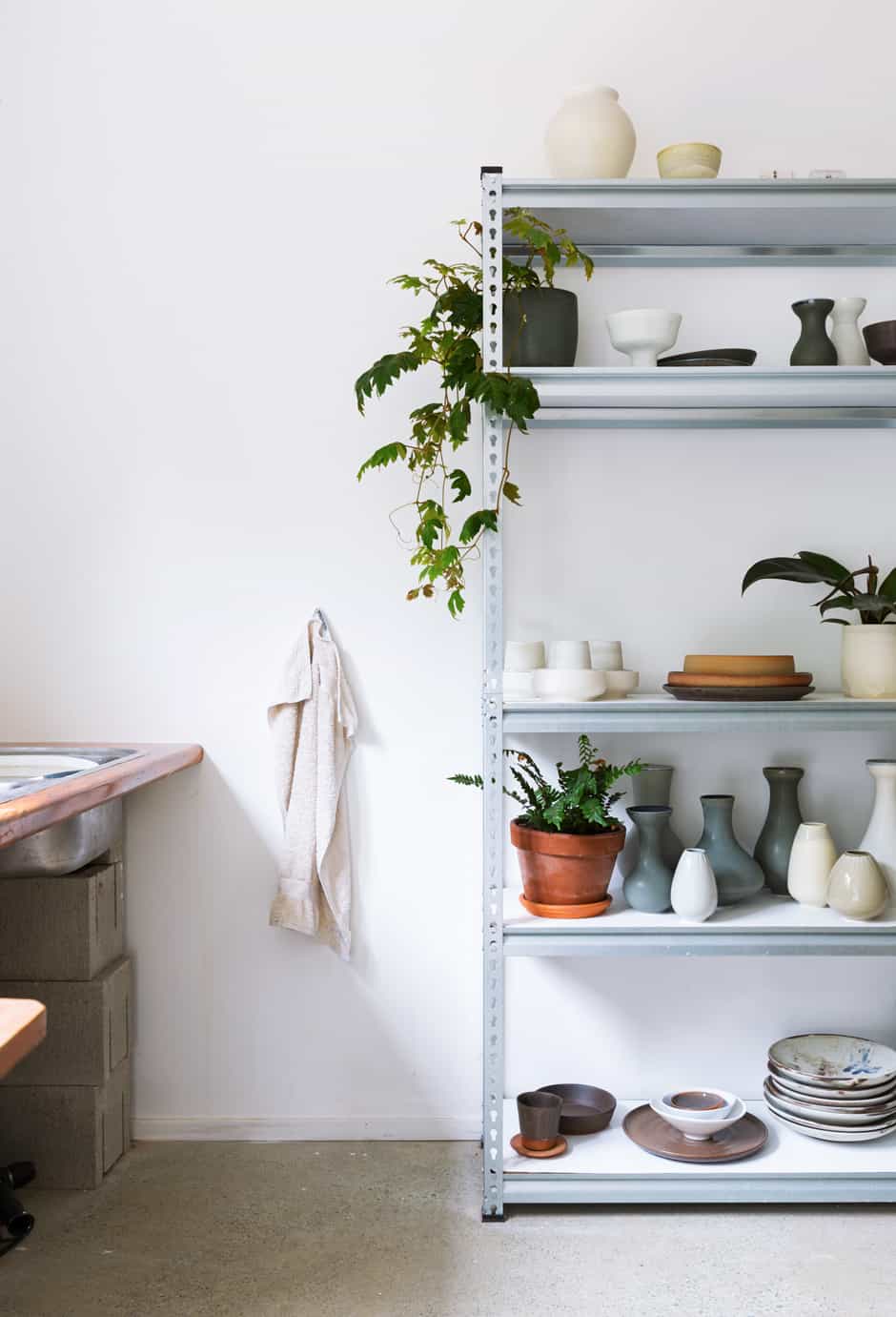 One look at Rachel Carter’s tranquil pieces and you’ll want to ditch your mindfulness practice in favour of a vase collection.

With nothing but birdsong to be heard in the Titirangi bush setting of Auckland ceramicist Rachel Carter’s home studio, it’s not hard to guess the source of the sense of calm in her wheel-thrown works – simple, quiet forms with an austere yet ethereal quality. But we couldn’t help but want to know more about her personal practice and the pieces she’s been commissioned to create for some of Auckland’s top restaurants. 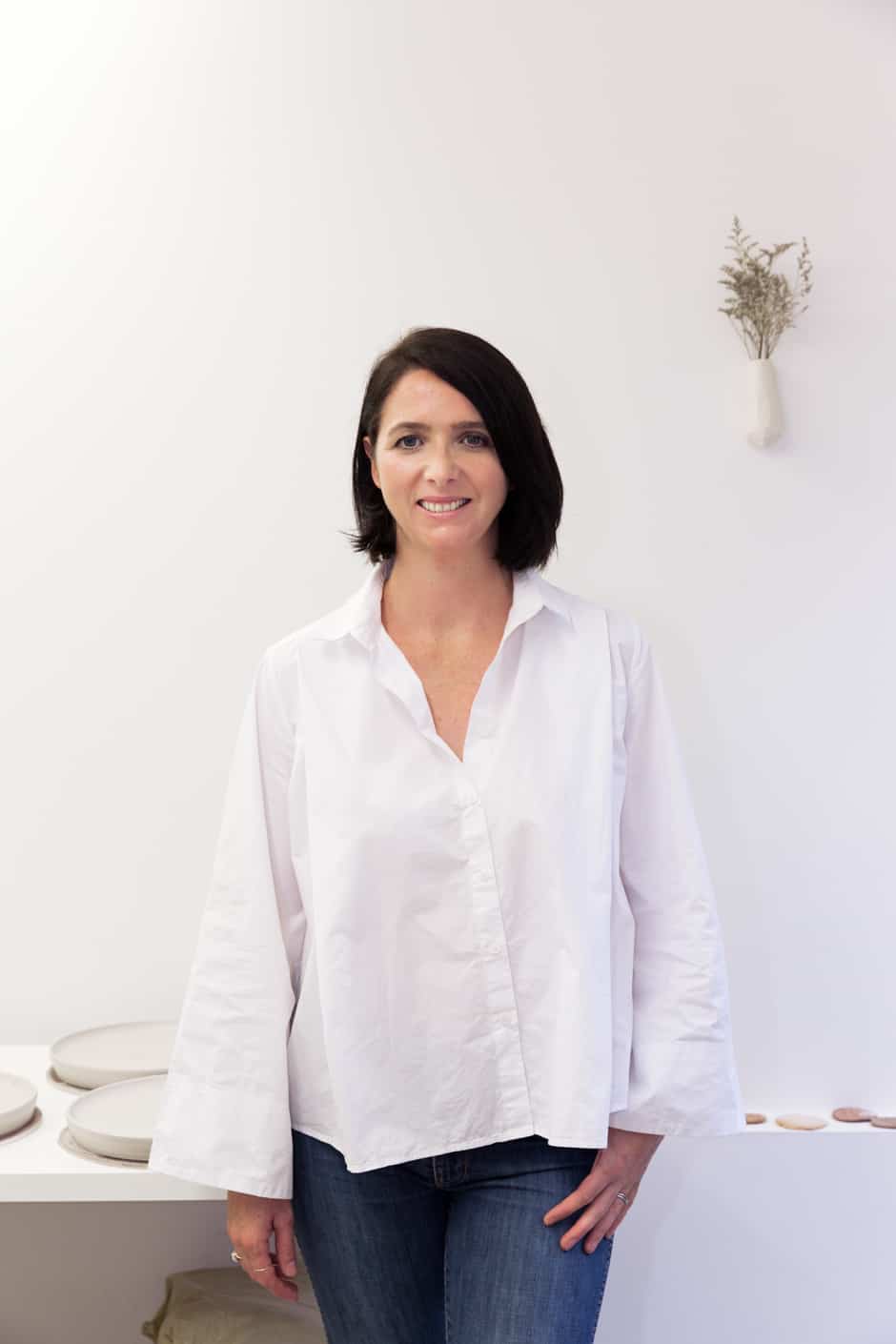 ABOVE Rachel Carter in her serene studio. “I grew up in a spartan home and still dislike clutter. I’m a bit conflicted about putting more ‘stuff’ out there, but I hope my work encourages people to buy a few quality pieces they’ll cherish, rather than poor-quality work they’ll discard.”

How did you come to be a ceramicist? Ceramics was part of the curriculum at the school I attended as an exchange student in Sweden. I loved it and continued to do the odd night class while I was at uni, but I never considered it a serious career option. After four years of working in law firms in London, I knew I couldn’t continue with that sort of lifestyle, so in 2005 I returned to Auckland to do a diploma in ceramic arts, which was absolutely the right decision for me. After that, seven years spent working in Peter Collis’s studio helped set me up to launch my own. 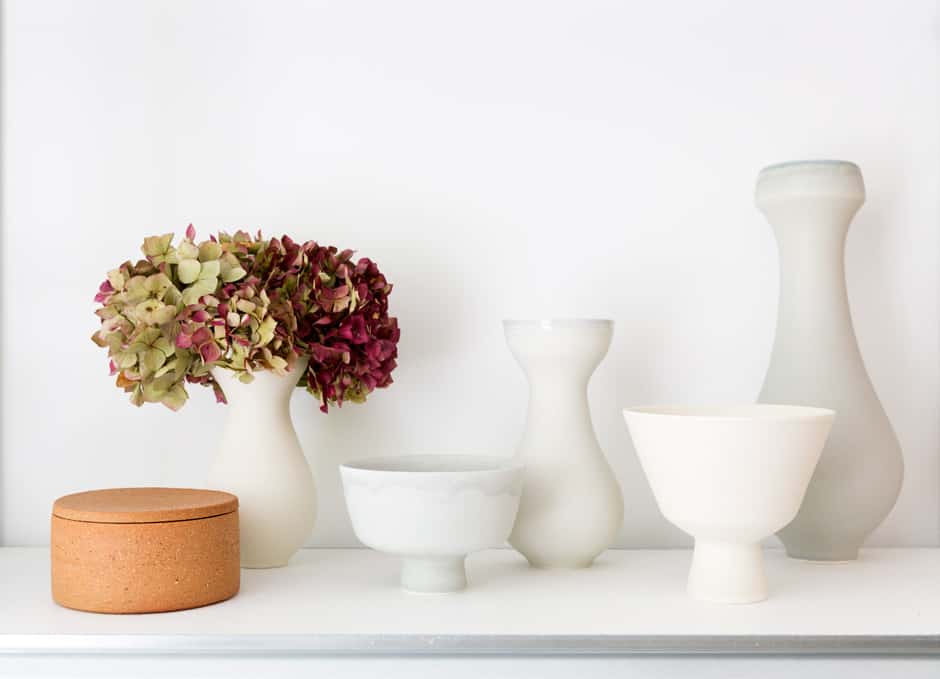 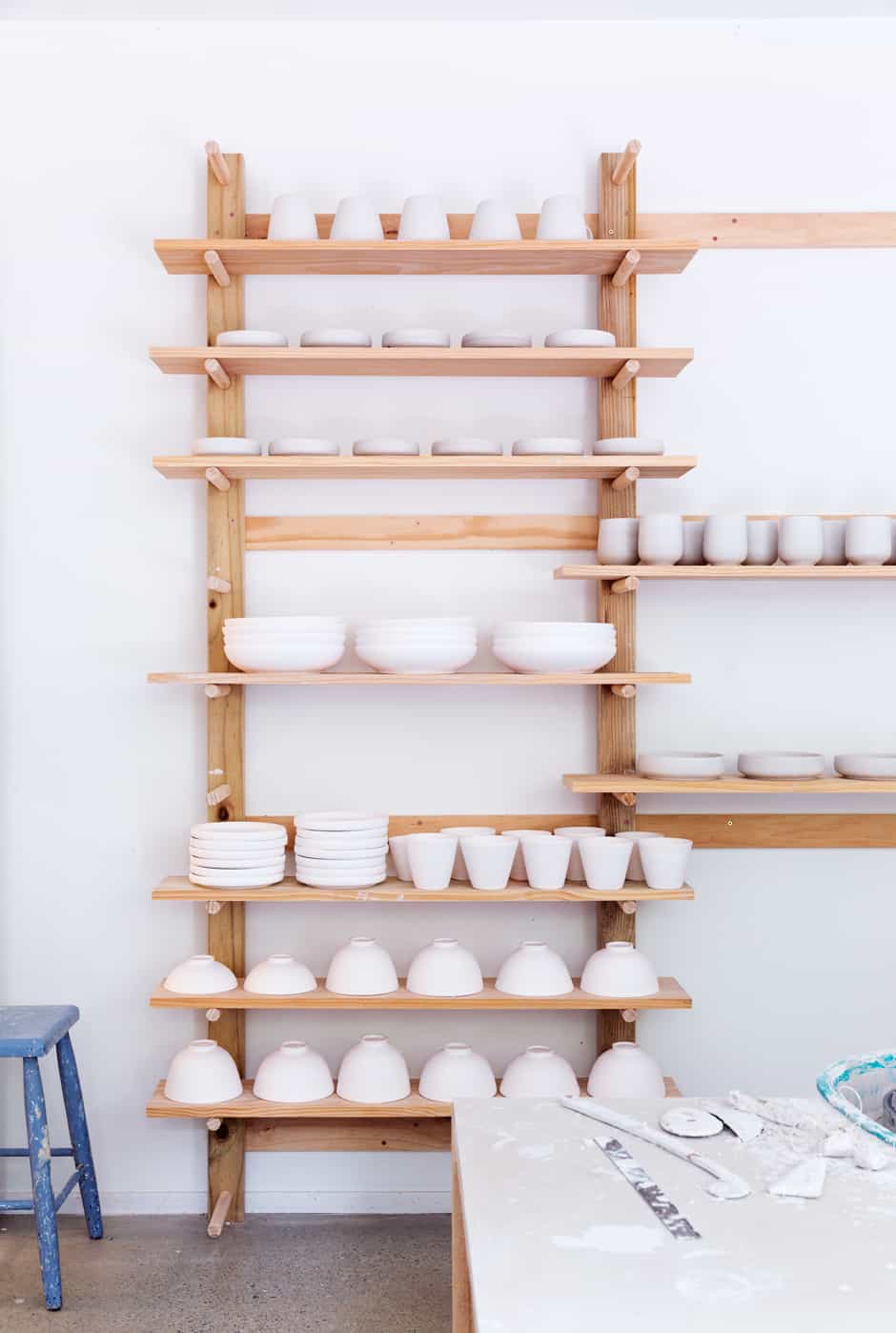 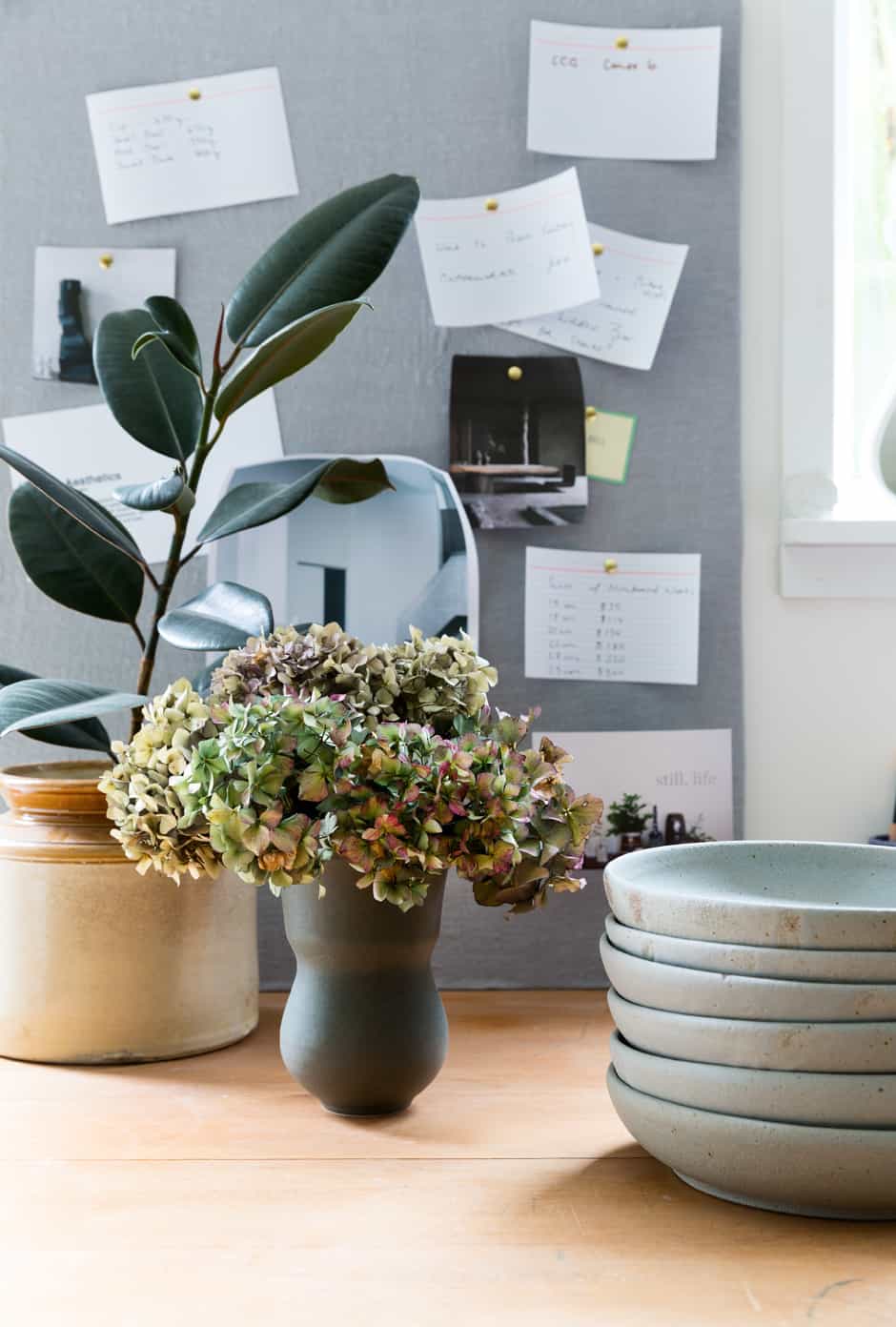 What’s the average day like in your studio? After the kids have gone to school, I have a coffee and plan my day, but beyond that it’s difficult to have a routine. With clay, everything has to be done at the right stage. Out here in the Waitakeres, it’s so damp it’s difficult to predict when work will be ready for turning or firing. Sometimes I turn late into the night because the clay is at the right stage, and at other times I have to find something else to work on because it isn’t dry enough for turning or firing.
My passion is throwing on the wheel. I love to spend time throwing anything from cups to bowls to vases. A day or two later when they’re dry enough, I put them on the wheel again to turn foot rings into the bases. Then once they’ve dried, they’re bisque fired in the kiln. I’m then able to glaze them and fire them again.
For my own work, I use porcelain, as the delicacy and glaze response suits my aesthetic. For restaurant commissions, I tend to work with stoneware clay for that more organic style.

Where do you look for inspiration? History. Most great civilisations have created amazing pottery and I often spend time in museums looking at ceramic forms as they developed over time. Mid-century potters such as Lucie Rie, Ruth Duckworth and Gertrud and Otto Natzler are always inspiring. But really it’s time spent on the wheel that’s the most valuable; I sketch but it’s not until the form is there in front of you that you really know if it works or not. 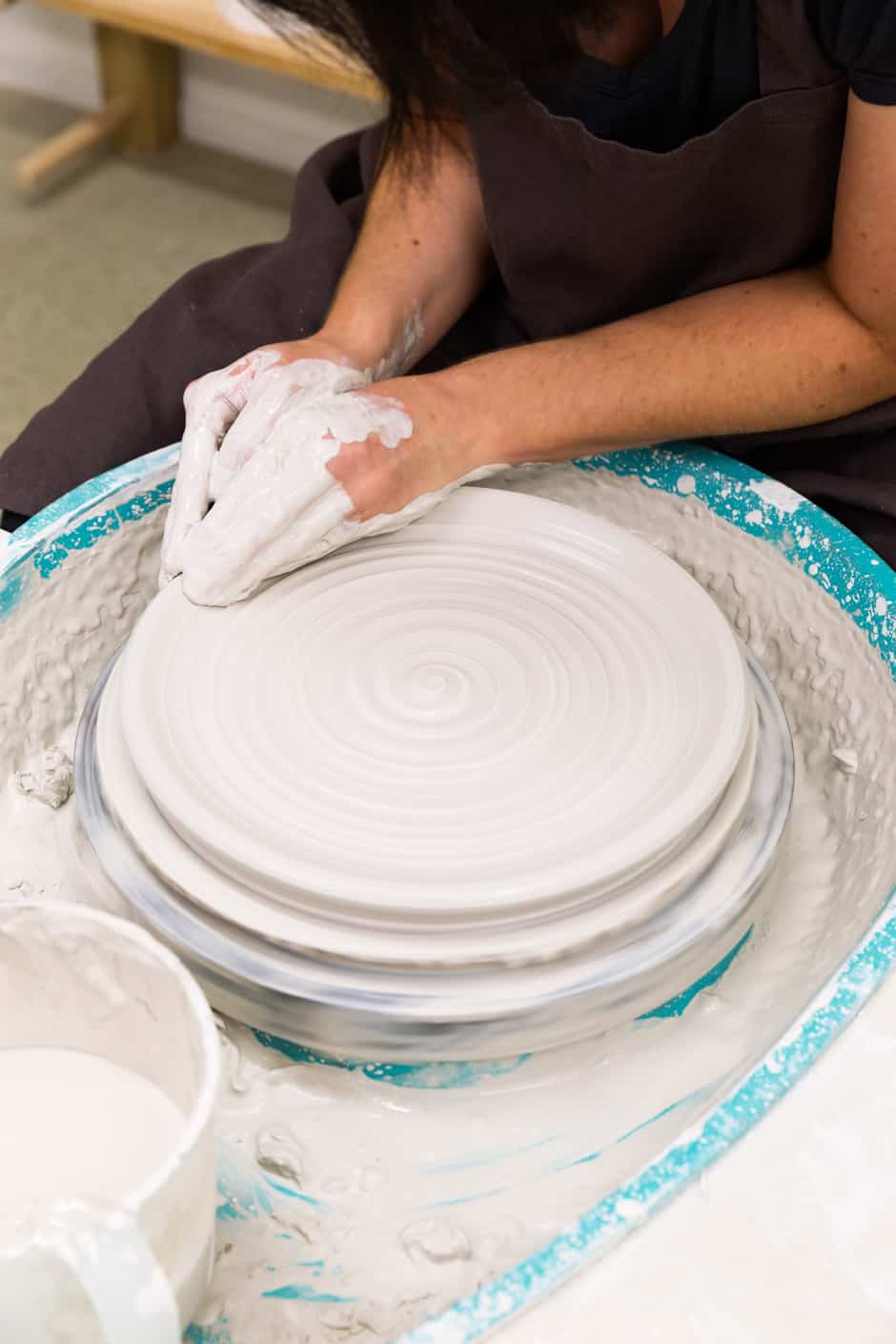 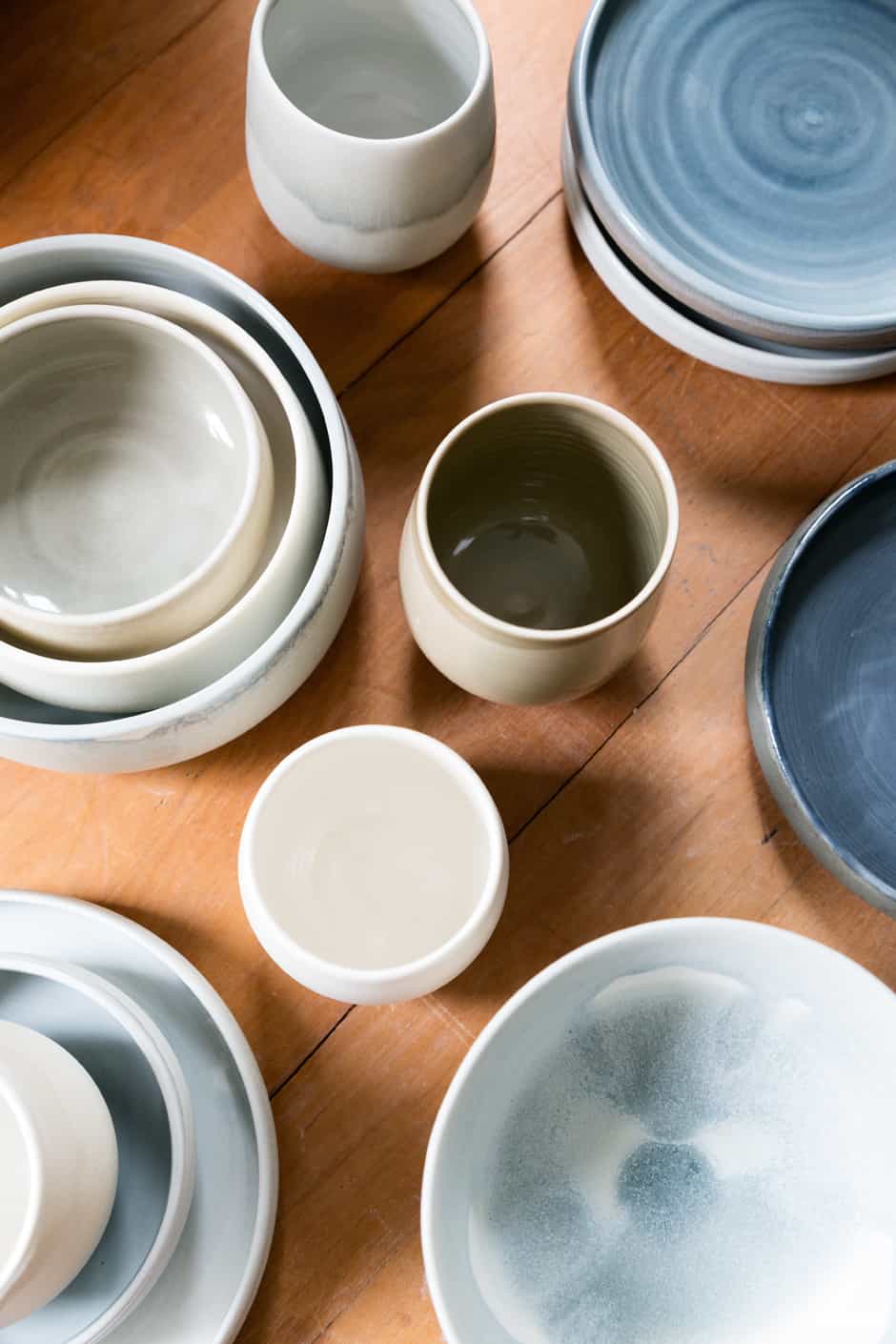 ABOVE As well as making commissioned work and pieces for her online shop, Rachel’s preparing for an exhibition at Auckland’s Masterworks Gallery.

You produce tableware for a few Auckland restaurants – tell us about that. It’s great to collaborate with chefs like Sid Sahrawat and Ben Bayly – it’s inspiring to work with people who are so passionate in their own fields. Working out ways to get the glaze finish they envisage plating up on and making forms that can stand up in a professional kitchen is challenging and satisfying. 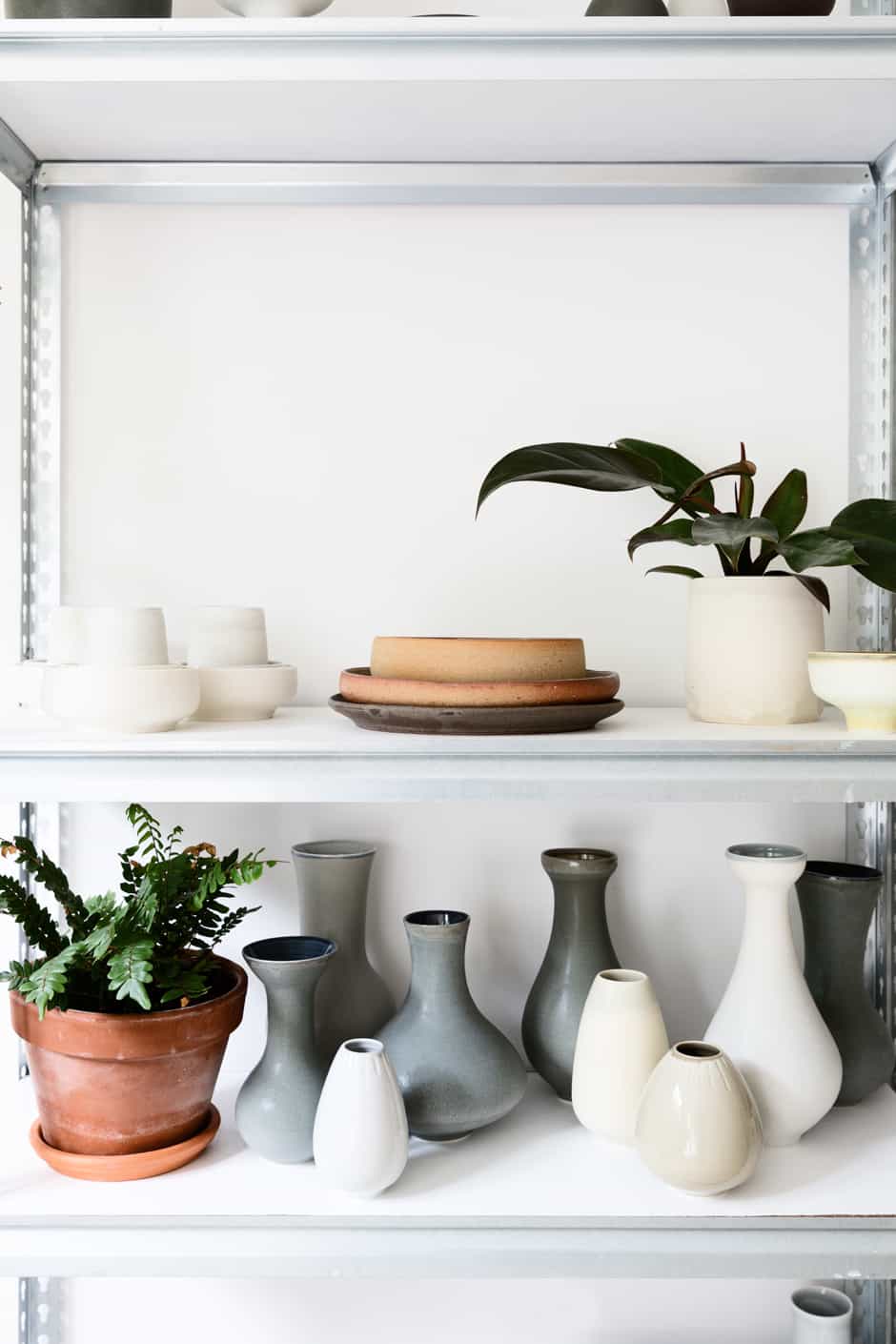 Do you have a favourite piece? I love it when a selection of vases really comes together to make a grouping that sits well in its surroundings. I drink from
my own little coffee cups each morning, and they’re very satisfying to use.

What would your dream project be? I’d love to work on a massive installation and see my forms en masse filling a grand space. But really I’m happy being able to make pots day after day – my own work and the restaurant collaborations are the perfect balance.
rachelcarterceramics.com; masterworksgallery.co.nz