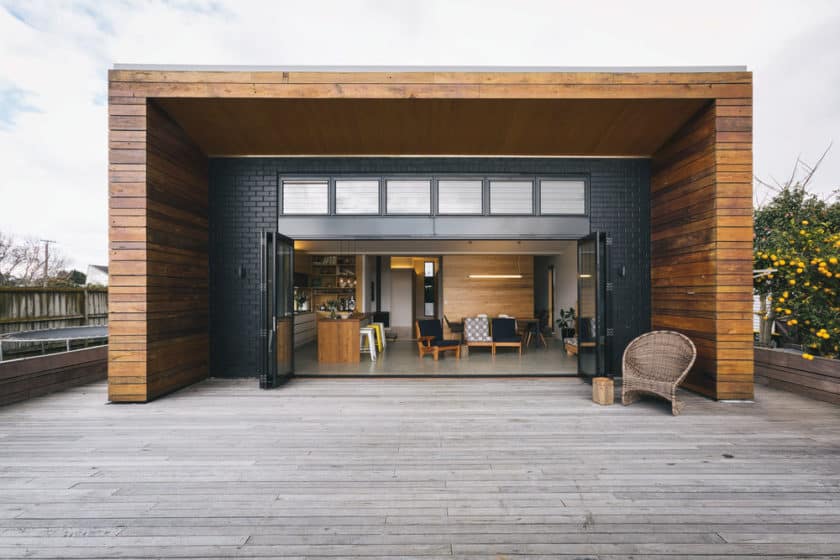 Creating an eco-friendly home that also fitted the design principles of Sthapatya Veda architecture was a balancing act – but one that worked out perfectly in the end.

The little-known ideologies of Sthapatya Veda architecture incorporate elements of passive solar design. This was fortunate for Auckland couple Peta and Joe Davy because it meant, when it came to building their home, that they could both stick to their guns. Peta grew up with a father who was “a greenie” and inherited his passion to step lightly on the land. Jo, on the other hand, practises Transcendental Meditation, so his response was driven by the teachings of Maharishi Mahesh Yogi, founder of the movement and one-time spiritual guru to The Beatles. While planning this house in the South Auckland suburb of Mangere Bridge, the two had to meet in the middle. 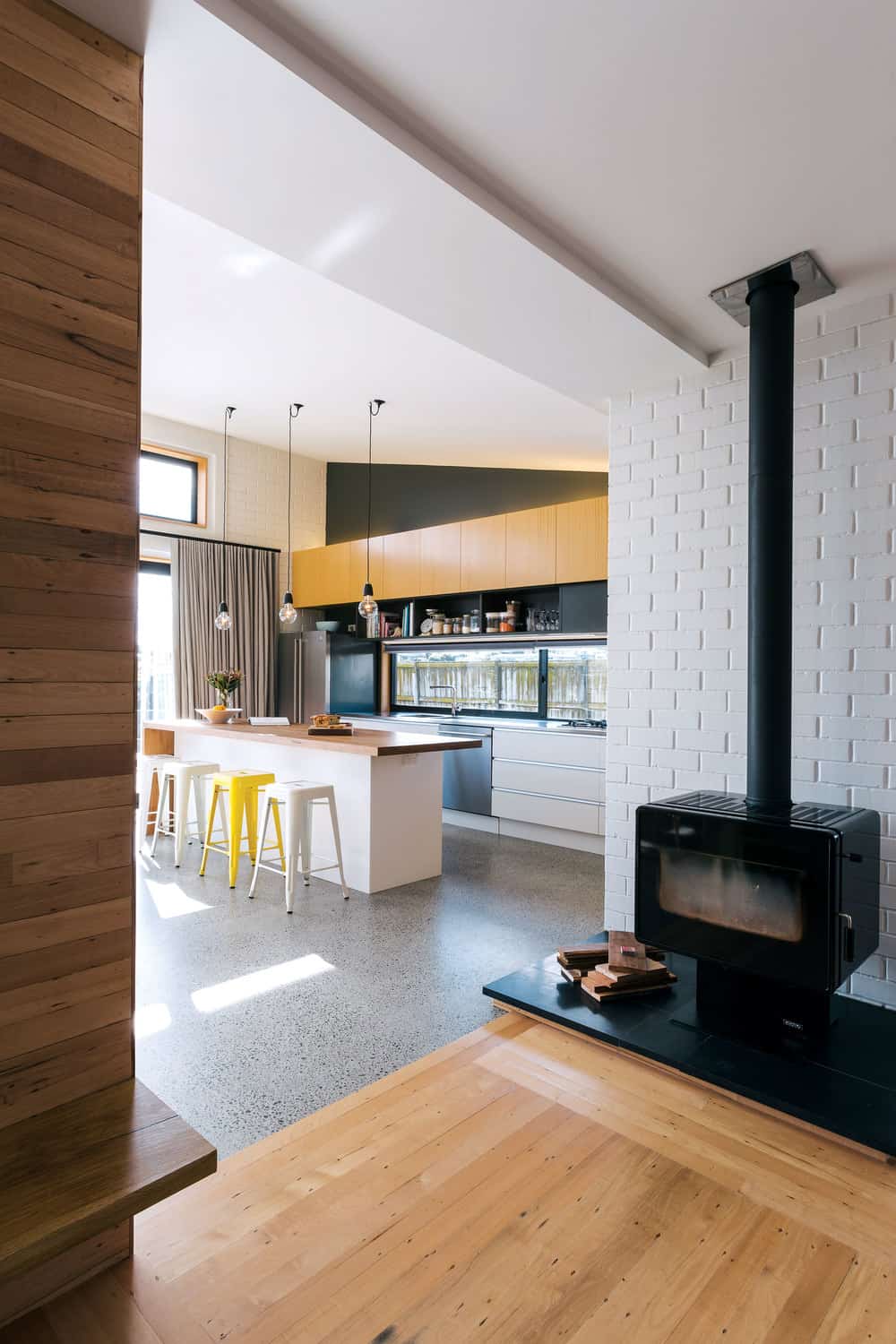 Visitors to the home in its unassuming cul-de-sac initially notice the remarkable geometrical strength of its outline. “The shape loosely mimics that of Mangere Mountain,” says Peta. A butterfly roof acts as a counterpoint to the heft of the form below it.

Inside, a sense of spaciousness is the first impression, but those who are more eagle-eyed might spot a ‘flaw’ in the floor. A few steps beyond the entrance a square of timber planks is placed at right angles to the rest. “It looks like a trap door, but it’s actually the Brahmasthan which marks the central axis of the house,” explains Peta. Some Vedic architectural texts suggest the Brahmasthan serves as the silent core and should never be walked on. But in a home shared with two growing boys – Andy (10) and Sam (7) – it’s far more likely to be scooted over at a blistering pace.

The couple bought the property, and the worse-for-wear 70s house that was on it, as a rental investment. It wasn’t long however, before the location won them over and they decided to take up residence. At its northern end, it overlooks the green hillocks of the Lost Gardens, a protected area of spiritual significance. Remnants of stone mounds indicate it was once used by Maori for gardening. They sold the original home for $10,000 and it was transported north to become a bach.

Peta has worked with her mother as a designer at Yellowfox for seven years. She says she is saddened that her clients seldom use sustainability as a yardstick. “My father always said that you must lead by example,” she explains This house was her chance to practice her principles. 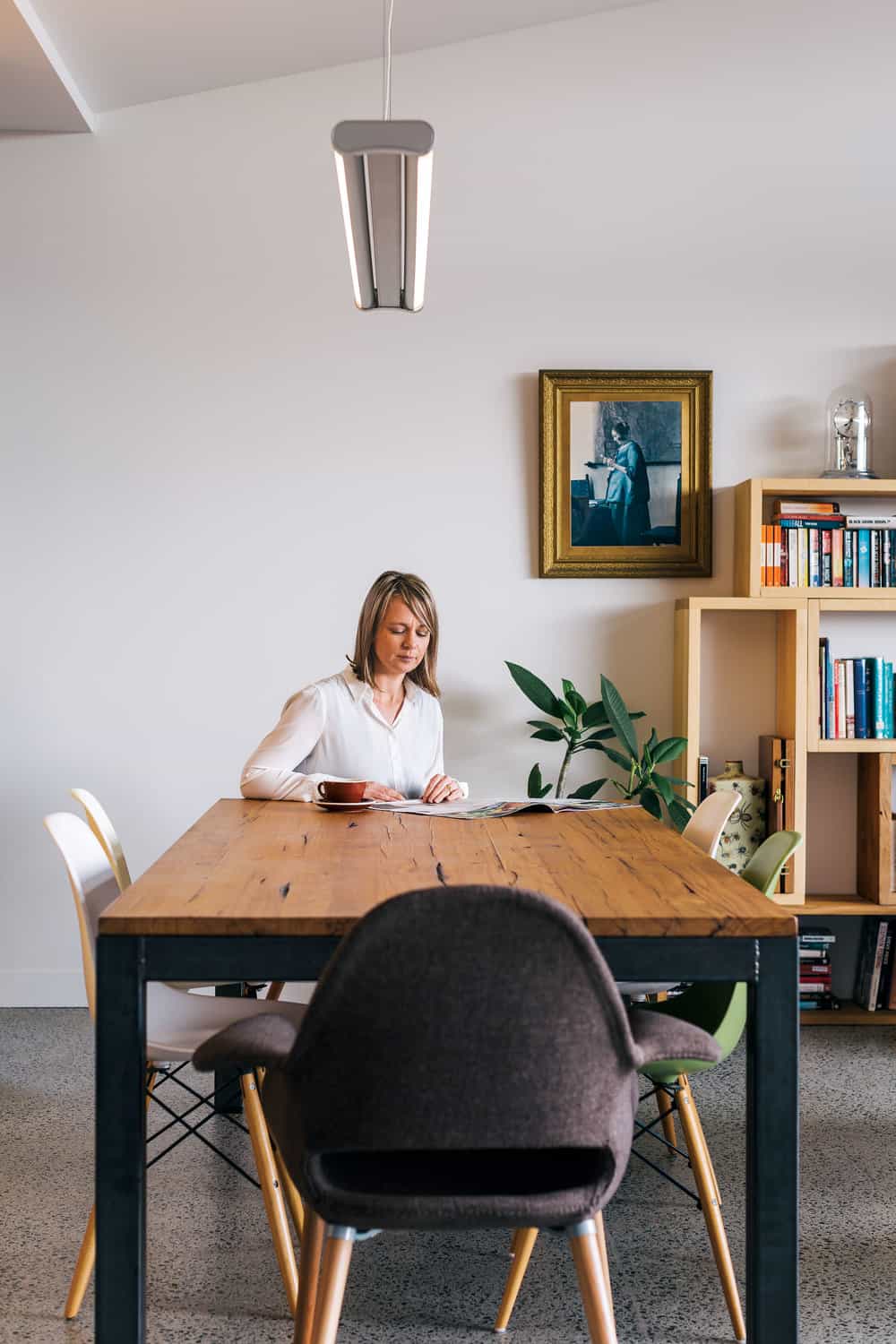 DINING Peta sits at the dining table, made by Kauri Construction from recycled power poles – the same timber that features on the exterior of the home.

Keeping within the parameters of Sthapatya Veda could have been onerous. This ancient science strives to respect cosmic energy lines and proponents believe that in so doing,a building will promote harmony, health and wealth. Peta, who worked in collaboration with a Vedic consultant, Neil Hamil, and architectural designer Mark McLeay, likens the process to doing a jigsaw puzzle blind-folded. “Yet solving all those problems was very fulfilling,” she says.

One edict states that the orientation of a dwelling has a dramatic impact upon the quality of life of its occupants. In terms of spatial design, the dictum was that the toilets and sinks face north. Cooking was to be done in the east since the rising sun holds the most nourishing energy. In addition, the dimensions of all the rooms were prescribed to the last millimetre, reflecting the idea that proportion is the key to successful design in nature.

Overlaying all this are Peta’s own eco sensibilities. Concrete floors to the north, combined with a roof pitch that captures every last drop of winter sun, means the wetback fireplace is used to supplement hot-water heating, rather than warm the house. The angle of the butterfly roof allows solar panels on the rear bedroom wing to power the hot-water system. “All four of us shower in the morning and there’s more than enough warmth to last,” Peta says. Insulation is compacted into the 220mm-thick walls and the double-glazing works almost too well. “Thank goodness for the high louvre windows – the house would be a hotbox if we had to shut it up during the day completely.”

An important component of Sthapatya Veda architecture is building with natural, non-toxic materials suitable to the local climatic conditions. In the Davys’ case this was easily done. “Joe’s family runs a timber recycling business,” says Peta. “So we were always going to use secondhand timbers.”

Nevertheless, she was adamant the aesthetic steer clear of the rustic look. Her penchant is for Scandinavian simplicity, with a bit of everyday messiness thrown in.

The house was conceived as a black brick box, protected by a timber shield – a striking wooden coat made from recycled power poles. “There aren’t many people who could live with its imperfections.” Spiders and insect life find homes in the hidey holes that pock-mark the cladding’s surface. And Peta proves her devotion by oiling a section of the timber skin every weekend. “I love its colour and don’t want it to fade to grey.”

Yellow wood soffits are in keeping with her love of richly hued timbers while inside, honey-toned tawa, once in a 50s house in East Auckland, has been re-purposed as flooring, walls and on the sliding doors. The slim-line planks may not be en vogue, but they bring a fine elegance to the narrow 162m² home.

Rescuing the unwanted is Peta’s modus operandi for keeping the budget under control, and she’s not averse to asking suppliers for cast-offs. Case in point: the veneer that now coats the kitchen cabinetry. “The company had these leaves lying around out back for 12 years!” The Japanese aesthetic of the veneer is set against a black backdrop to emphasise its colour and interlocked grain.

Another example is the bricks that anchor the north and south ends and feature on the fireplace. These were seconds that sported a “hideous yellow rumbled surface”. Peta always knew she was going to paint them white so she asked the bricklayer to turn their faces inwards as he laid them.

Melding two philosophies into the dwelling has taken compromise, but it has been worth it. “We’ve ended up with a home that feels very grounded and linked to the environment.” The children walk to the local school across the paddocks of the Lost Garden, passing sheep and cows as they graze. At one point in the year the ruminants must share the field with about 2000 oyster-catchers who come to breed here. The family feels the privilege of being in such a special place so close to the city.

A pencil drawing tacked to the wall behind the dining table says it best. On it, seven-year-old Sam has written: “This is our house. I love our house. We are lucky.”  To learn more about this home, see Claire McCall’s new book, Green Modern.