With tall and wide windows to the estuary, this Riverhead retreat reveals its riches little by little 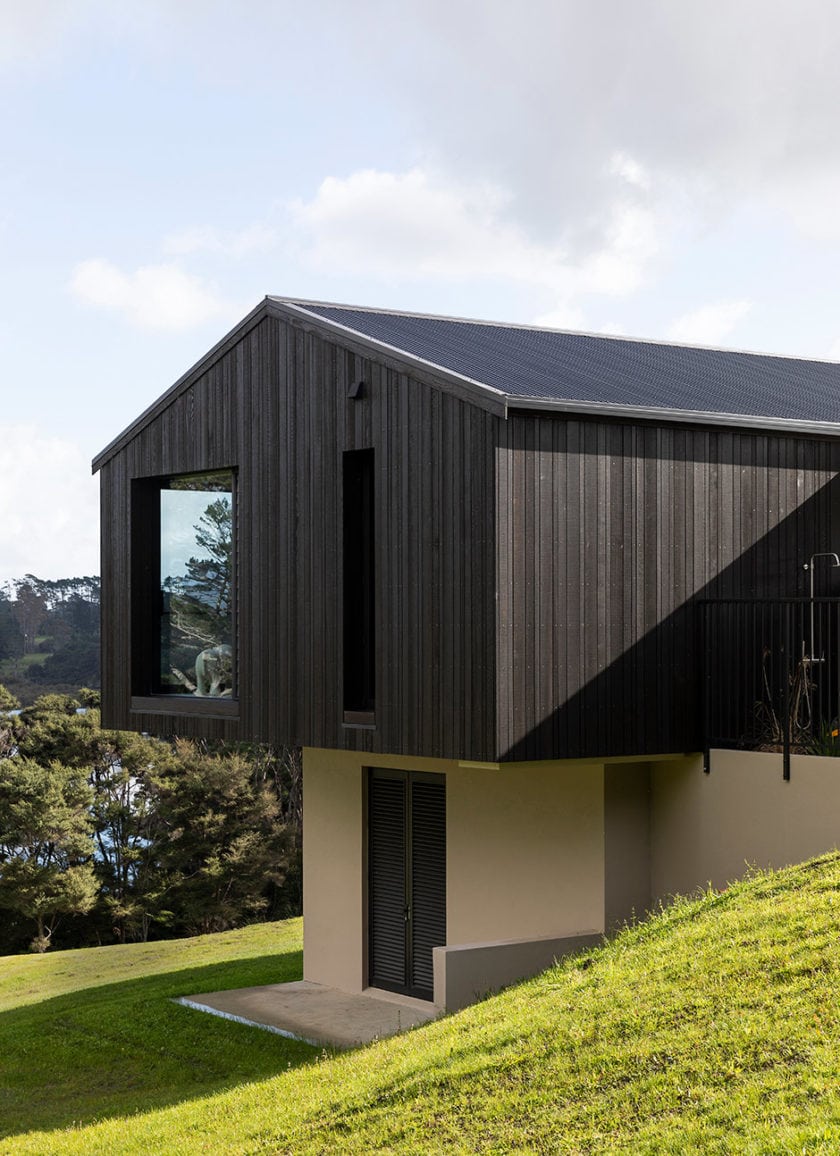 A sophisticated series of glass galleries created using APL’s Architectural Series, it draws the views right on in.

Down a narrow, tree-lined driveway at the end of a cul-de-sac, in a pretty special subdivision on the edge of an estuary, sits a house that the seed of an idea built. A busy working couple seeking to leave their Auckland City abode for the quiet calm of Riverhead half an hour north, its owners had held onto this unique piece of land while they let their wish-list germinate.
They dreamed of a country retreat that would be a luxurious dwelling for two, yet expand to welcome their older children, future grandchildren and guests when they came to stay. The spectacular result of their imagination and that of Young & Richards Architecture, project-led by Harriet Pilkington and Elvon Young, is a three-wing, four-bedroom work of art — a series of glass galleries that unveil a breathtaking view one step at a time. 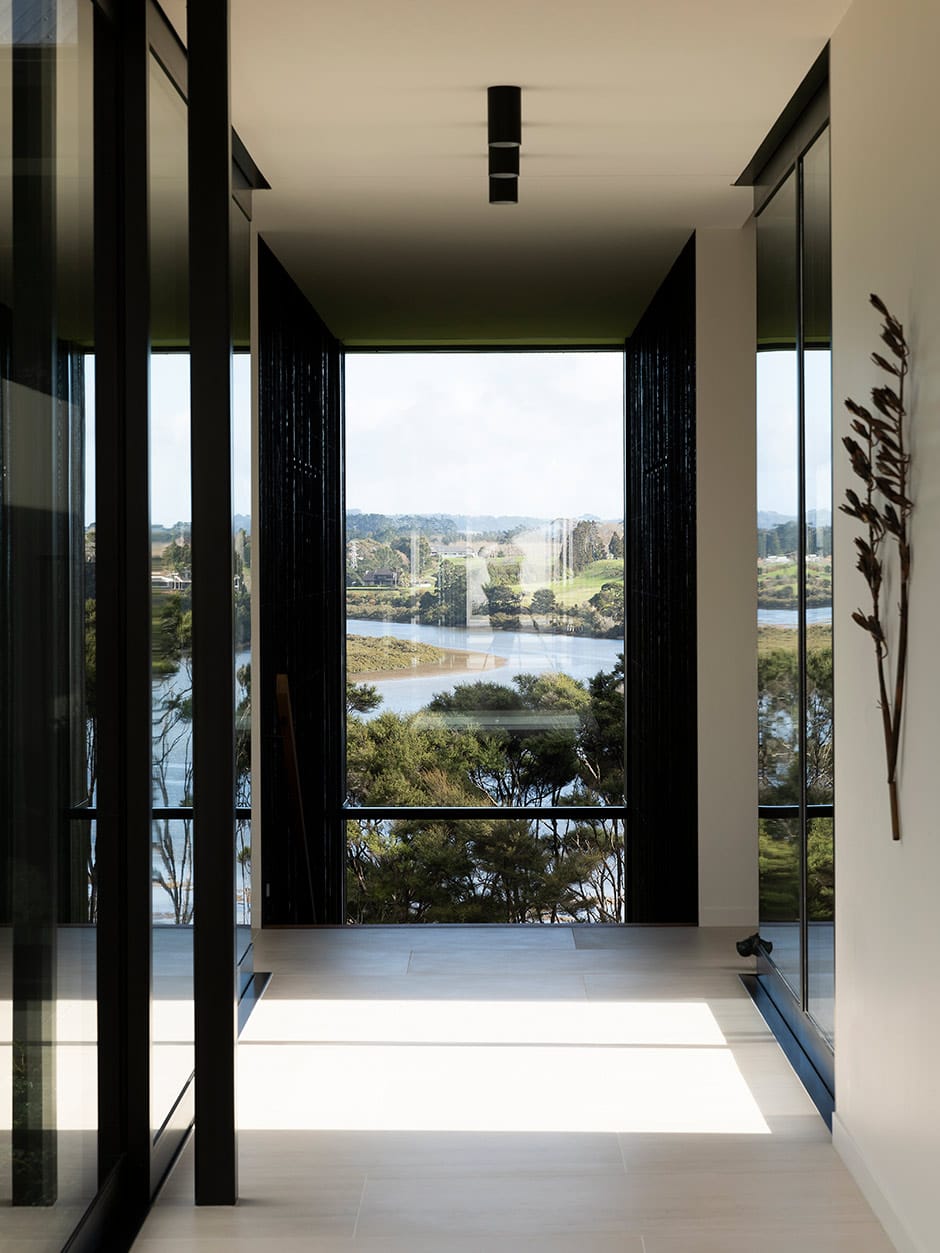 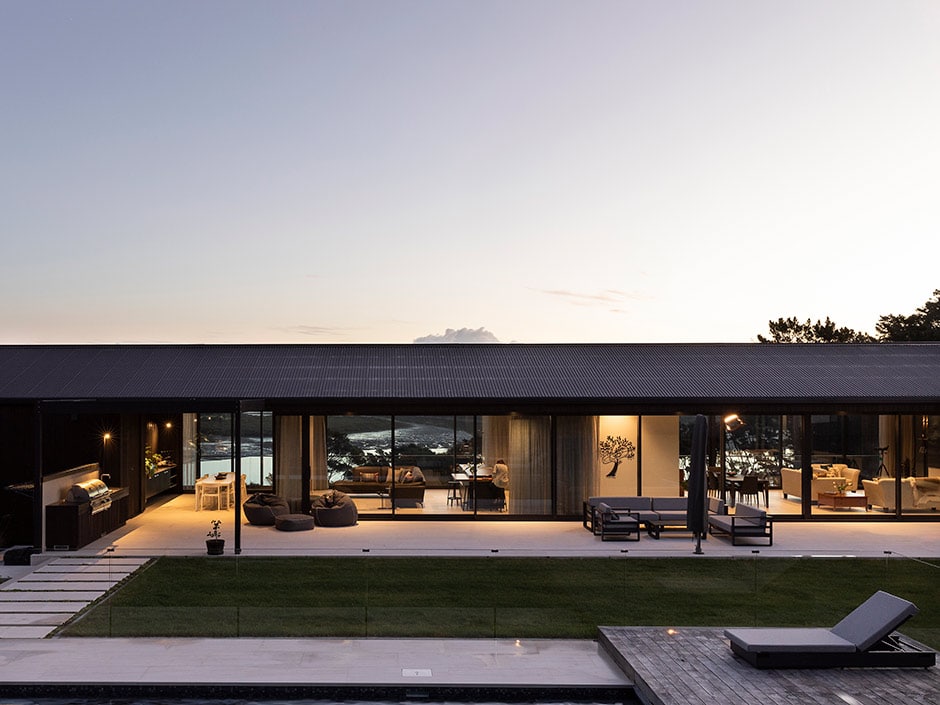 MAIN IMAGE A harmonious reflection of the surrounding bush, random-width vertical cedar weatherboards from Rosenfeld Kidson stained with Naturetone Black Teak combine with Trimrib roofing by Roofing Industries and masonry blocks with a Rockcote plaster finish.TOP “We used First Windows & Doors’ APL Architectural Series, which allowed the building to really express itself using the technology of today,” says Elvon of the meticulous joinery. The floor tiles in the living areas are Portraits Faro by Ceramiche Caesar. ABOVE With an in-ground pool, and barbecue and dining areas, the outdoor room is a much-loved extension of the indoor ones.

Introduced to the couple by Synergy Build Group, Harriet and Elvon recall their delight when they saw the site. “I remember the bush with all the bees buzzing,” says Harriet. “It was beautiful — a kind of knoll that looked over the pond and then out towards the estuary, with amazing light and ever-changing reflections.”
Unassuming until you arrive at the end of the drive, this is a property that reveals itself slowly and subtly, which got Harriet and Elvon thinking about the individual moments they could capture, narrating a story in which the building gradually unfolds. Combining two trains of thought, they crossed a traditional rural vernacular (the farmhouse, the shed) with a strikingly contemporary one, resulting in an iconic rural-style building with all the openness and delicacy of a modernist glass pavilion. It acts as a structuring device for the land, protecting from the prevailing wind and shading from the sun while allowing visual engagement with the landscape.
“The home can effectively be described as a panorama — it’s a house that frames its views,” says Elvon. “A modernist pavilion by default has a lot of glass, but glass can take many forms, and in this case we used it to accentuate how the building floats on the landscape and the spaces float within the building. It blurs the boundaries between solid and void, light and shadow, inside and out.” 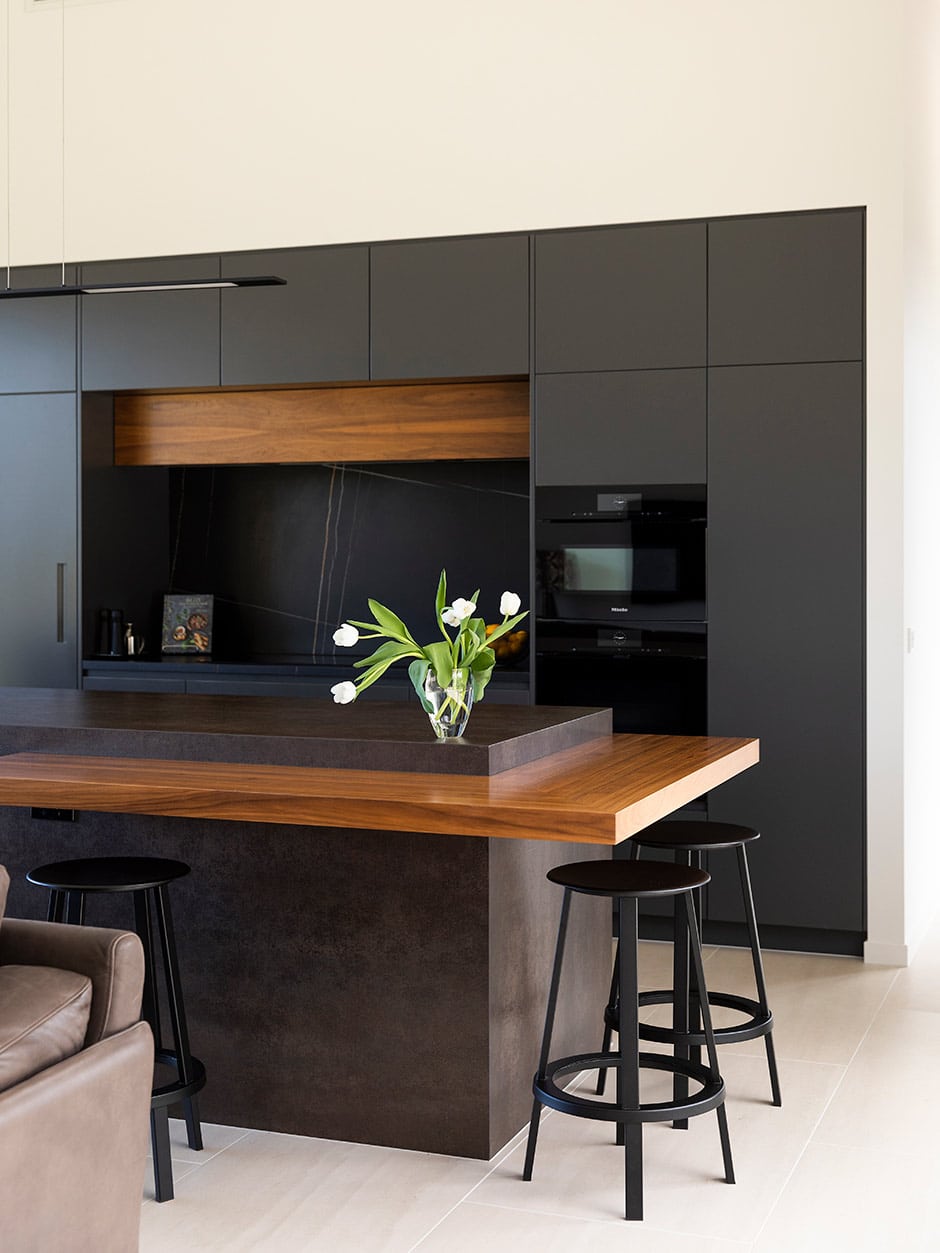 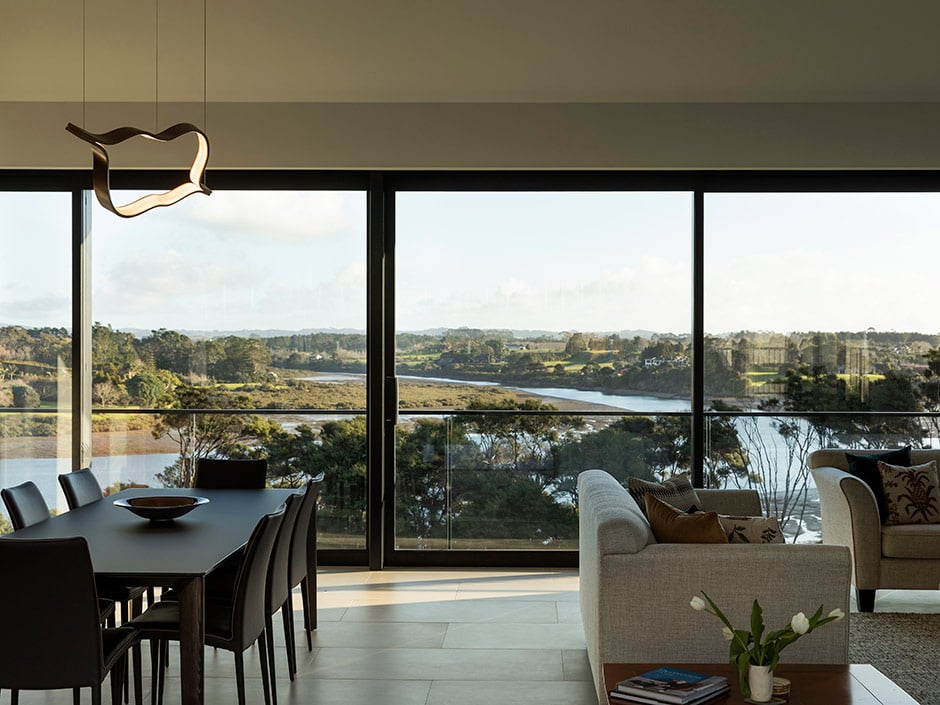 TOP Walnut timber and veneer bring warmth to the kitchen, in which the island benchtop in Iron Copper by Neolith is paired with benchtops in Azalai Nero porcelain around the hob and in the scullery. ABOVE Key features of the APL Architectural Series include its large formats, easy-glide panels, and flush surfaces and sills. Here it‘s finished with Duratec Matt Flaxpod powdercoating and colour-matched Urbo hardware.

Sensitive earthworks that honoured the ground’s existing contours optimised the site to allow the home to take in the view on one side, connect to a sheltered outdoor living and pool area on the other, and include a large underground garage and storage space. This private entry sees the couple drive around and into the belly of the house, then enter their home via a staircase, while the public entry takes visitors directly through the galleries. 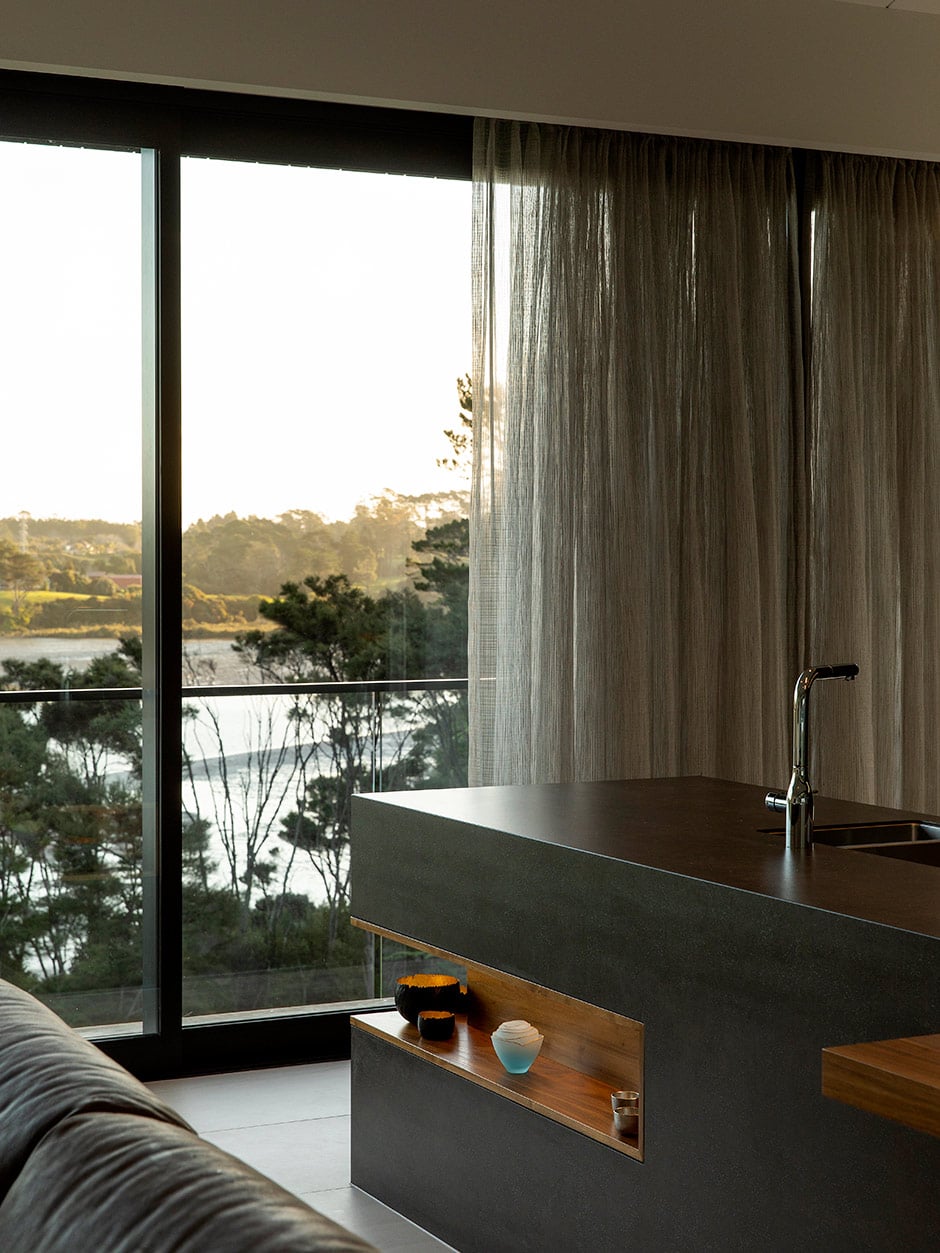 “At the end of the driveway, the site opens up into this incredible view,” says Harriet. “It’s a very surprising reveal — and the house is the same. It has a curved wall much like the formal entry to a country manor, where you drive in and are presented with a door, but the view isn’t revealed until the door’s opened. Inside, there are wings that take you to different areas of the house, and you’d have no idea when you show up that there’s that outdoor pool area. Everything’s sort of tucked away and revealed in layers.” 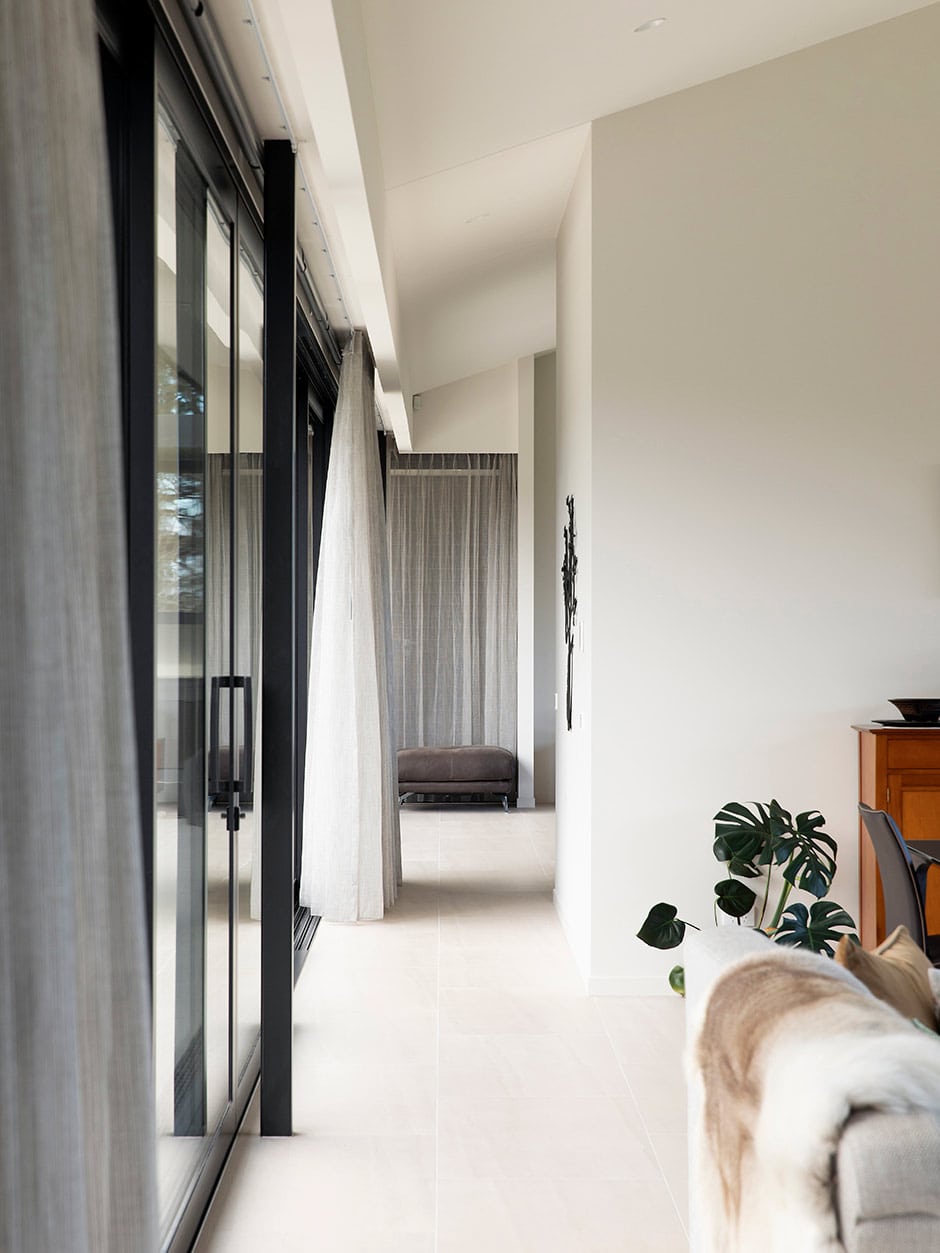 ABOVE Stacking sliding doors were specified for the entry and living areas. There’s extensive glazing here and along the passageways, as well as on the home’s corners and riverside and courtyard faces.

Essential to the project’s success, the home’s windows and doors weren’t fabricated as individual units, as would typically be the case; here, that might have restricted the way in which the glass could be expressed in the building. “We were really lucky to have First Windows & Doors on board,” says Elvon. “They went well beyond the call of duty and fabricated the aluminium joinery on site, specifically crafting it to create and embrace all the unique opportunities the house has to offer.” 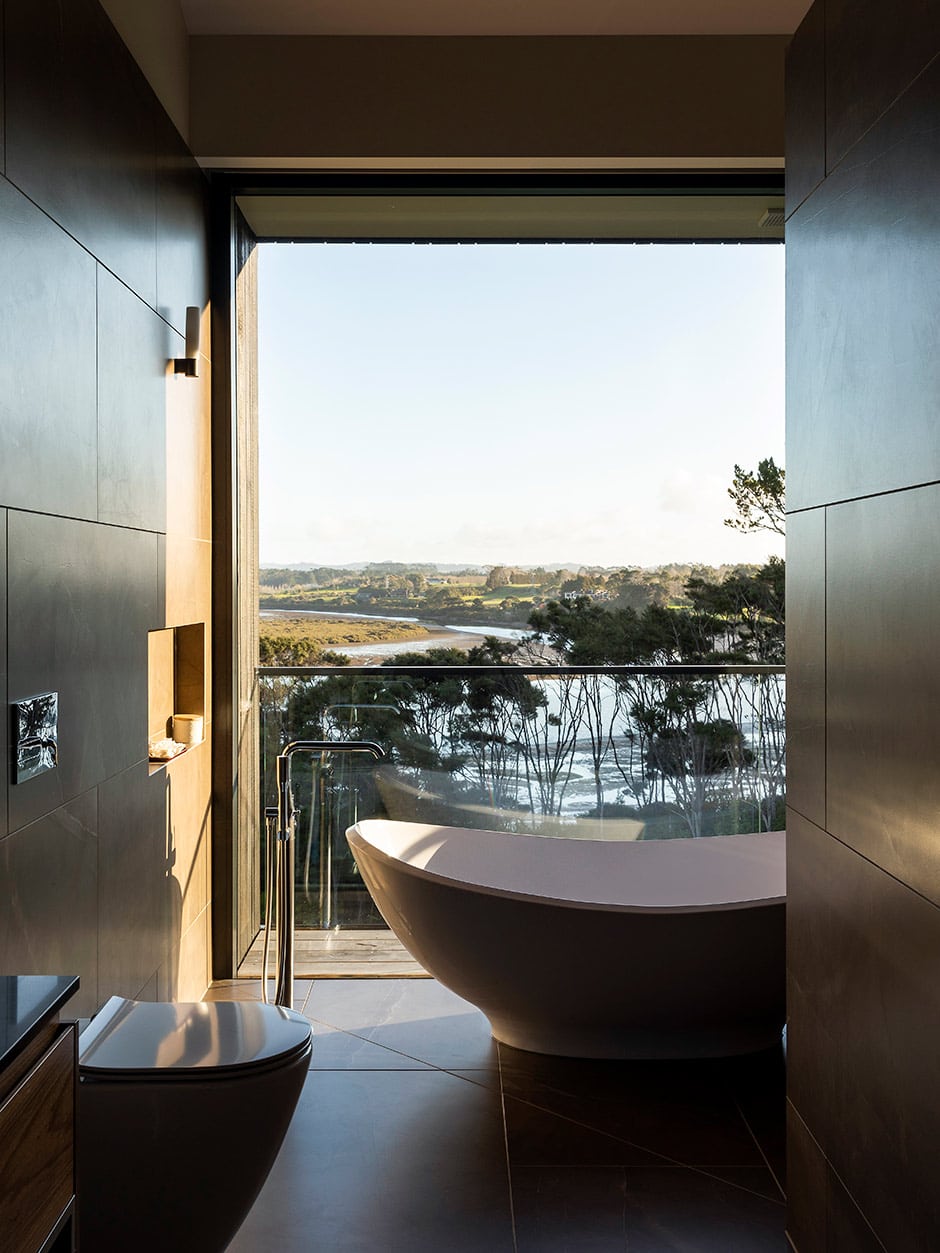 ABOVE In the couple’s tranquil ensuite, a large fixed window allows an epic view from the deep freestanding bath, the waterway stretching as far as the eye can see.

So as not to interrupt those glorious expanses of glass with horizontal joinery, full-height vertical louvres were specified for ventilation, while high-performance low-E glass was incorporated to enhance the thermal qualities of particular rooms. “The house is designed for sun, both to keep it out and capture it,” says Elvon. “Arguably, it’s a ginormous veranda, so you can open it up and let the breeze blow through, and close it down to keep in the warmth.” 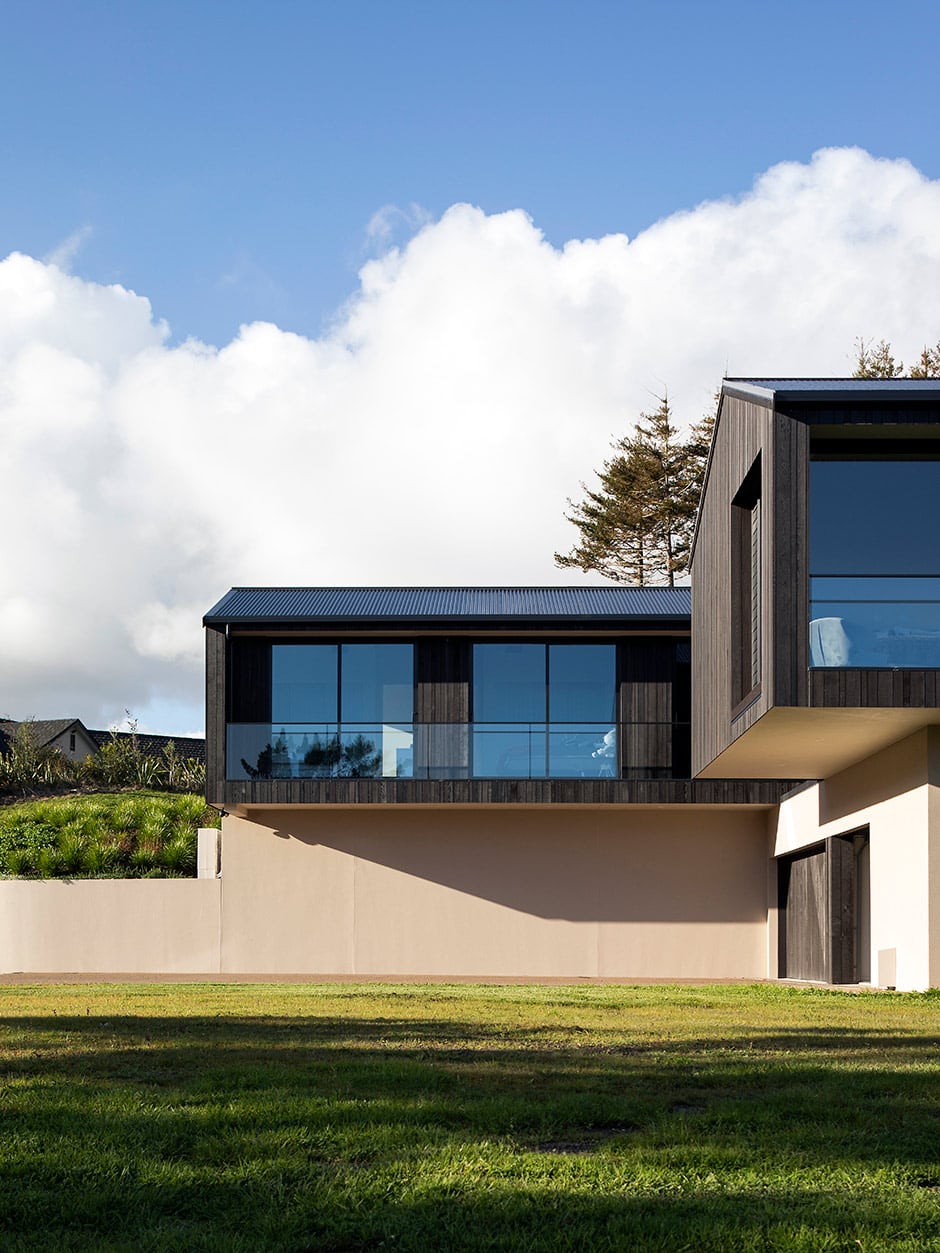 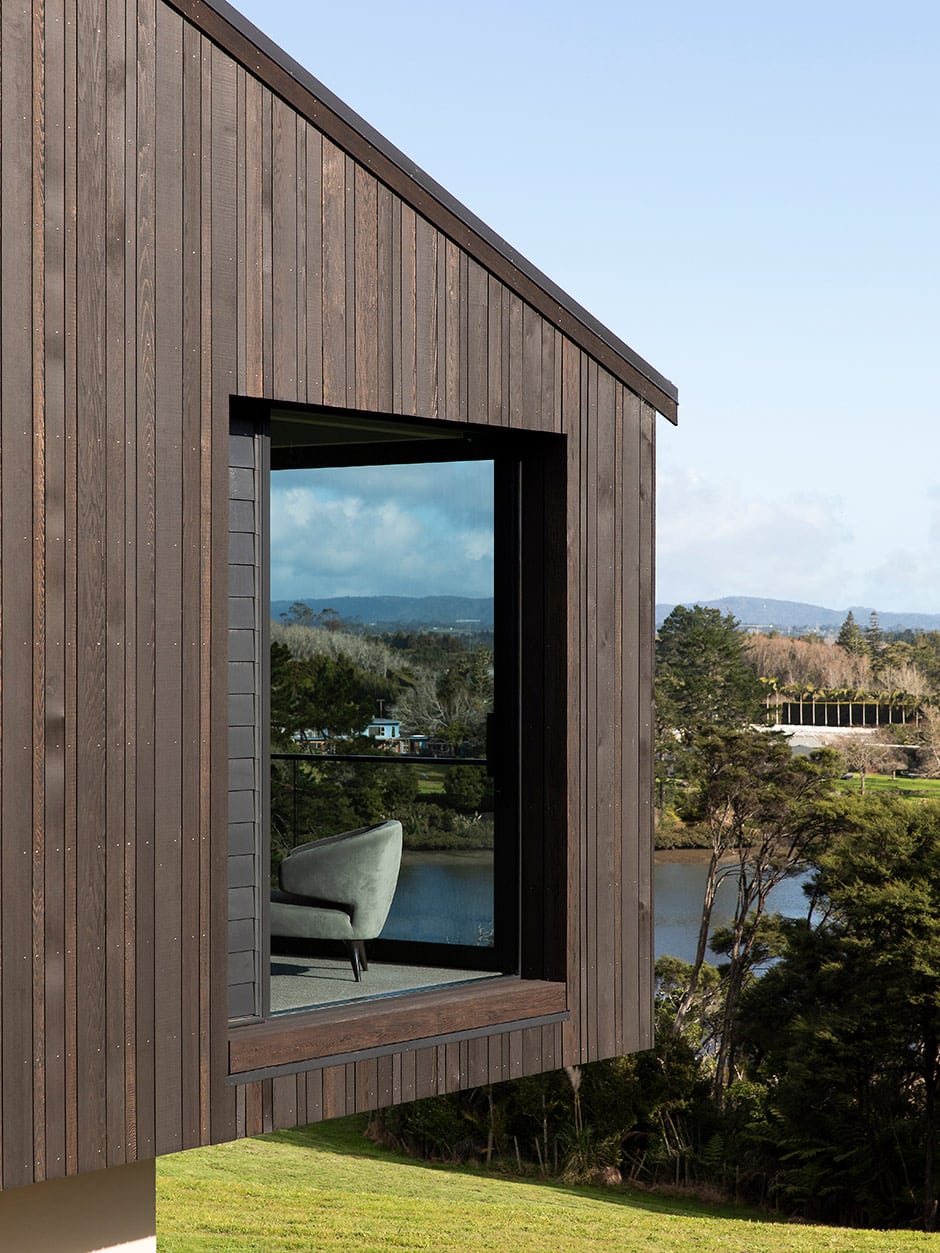 TOP Future-proofing the home for the couple, the living areas are entirely accessible on one level, with a garage and additional storage downstairs and a stand-alone barn for utility purposes. ABOVE Providing ample ventilation, chic louvres with aluminium blades sit alongside the swathes of uninterrupted glass.

For all its smarts and elegance, the home isn’t so precious that “if you have a single towel out of place the whole effect is ruined,” says Elvon. “This is a house that comes to life as it engages with its inhabitants and its environment. It doesn’t impose on the site, it’s an aperture for viewing it. It holds your attention, makes you smile, then disappears into pure sensation.”
firstwindows.co.nz

Whānau and whenua are at the heart of this renov