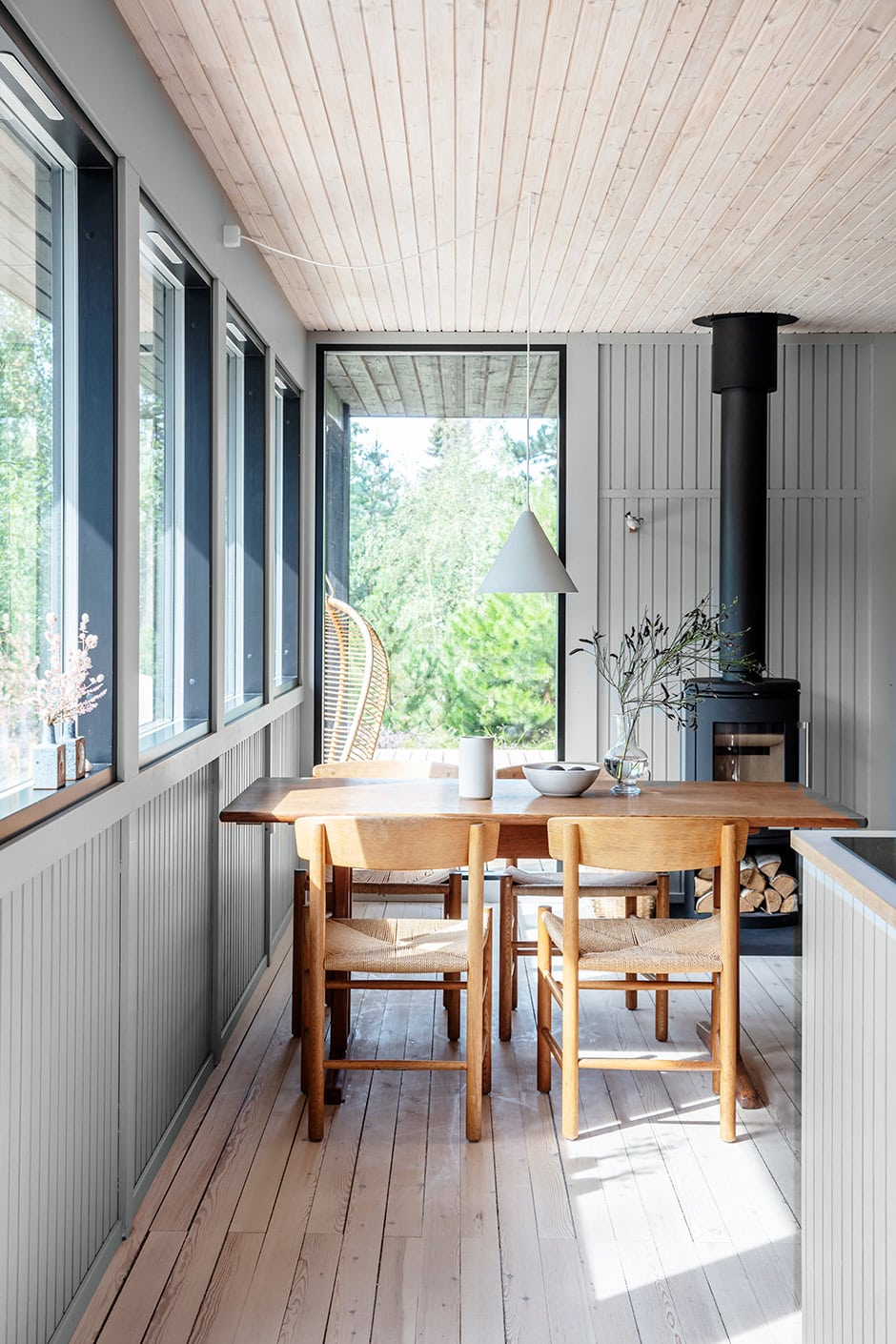 Upholding the values of the 1960s original, it’s updated in rustic, minimalist style.

Having spent many a holiday at a relative’s diminutive dwelling on the island of Bornholm in the Baltic Sea, Danish couple Stine Ny Jensen and Andreas Buchard were well-versed in the cottage-away-from-home life, and more and more, Andreas especially began to wish for one of their own. He fantasised about creating a sweet family sanctuary that would also provide their young sons Vilbert and Herman with experiences their — admittedly lovely — Copenhagen apartment couldn’t, so he and Stine started hunting out home ads, embarking on a daily search.
“The more we looked, the more I liked the idea, but we also became more picky in terms of the location, house and property,” says Stine, who works as a consultant in the education sector. “We were hoping to find a house that hadn’t been touched so we could renovate it ourselves. We wanted a natural location that could sustain itself and where there was space for wildlife — something quite different from the public park that is our ‘backyard’ in Copenhagen.” 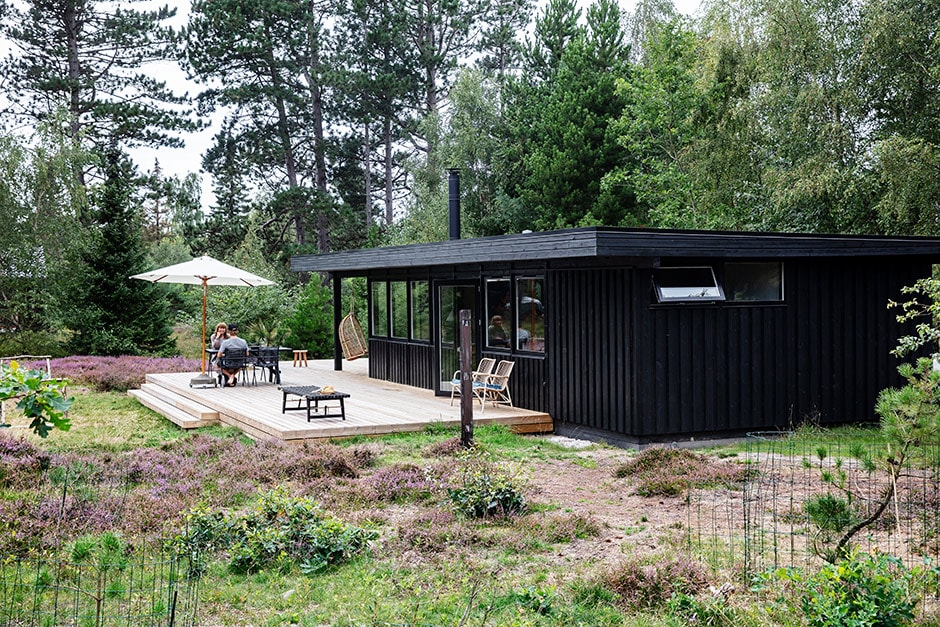 ABOVE When Stine and Andreas took over the cottage, the external woodwork was a reddish brown and there was a narrow wooden porch outside. Today, the home is the blackest black and the large pine terrace Andreas built forms a fantastic zone for outdoor dining and relaxation, plus a surface for the kids’ to ride their bikes and scooters on, which they can’t do on the bumpy heather-covered lawn. The cottage is also only 900m from child-friendly Tengslemark Beach, so the family head out onto the sand every time they come to stay.

From a geographical point of view, the couple initially cast their net widely, but when Stine’s cousin and her family bought a cottage in Odsherred, its familiarity piqued their interest. “With its hilly terrain, small cities, markets, art, ceramics, festivals and loads of history, Odsherred reminds me of Bornholm,” says Stine of their previous holiday haunt.
One day, a house for sale in Sejerø Bay caught Stine’s attention. “When I showed it to Andreas, he thought it was a joke, because it needed quite a lot of work,” she says. “But I had a good gut feeling and thought it was a unique opportunity. It wasn’t at all like the other houses and plots we’d seen, and it met almost all of our criteria.” 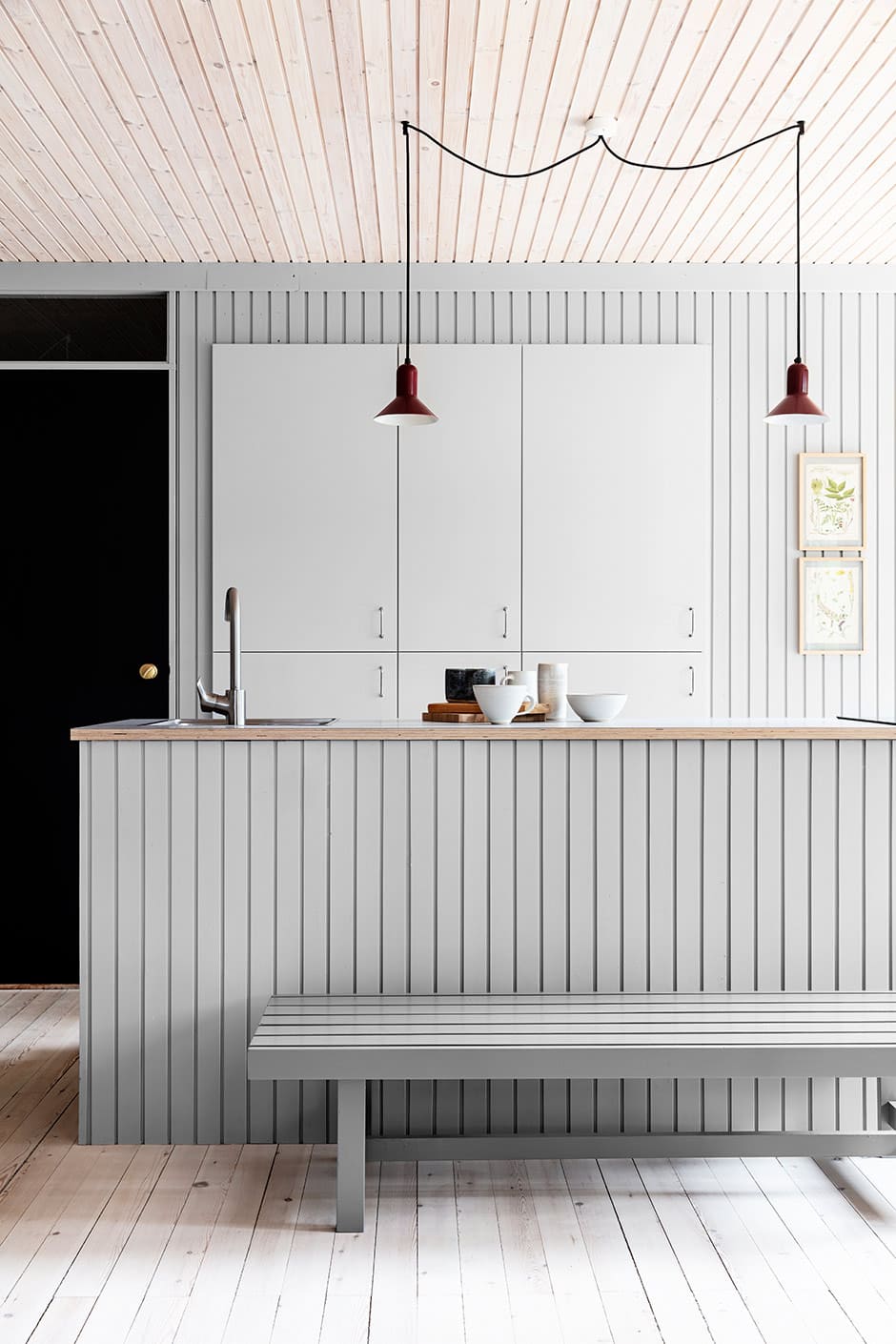 ABOVE These industrial-style pendant lights over the kitchen island were fortuitously discovered at a fleamarket for an absolute steal, while the repainted bench in front of it was one of the cottage’s existing pieces, formerly used as a coffee table. The black door on the left is also original and along with the one in the bathroom is one of only two internal doors.

Situated on heather-covered moorland in a wooded area where walking tracks criss-cross the ground and the treetops grow together to form a leafy sky overhead, the architecturally designed cottage was being sold by 92-year-old Mrs Møller, who’d built it with her husband in 1967. She’d owned it ever since, but the home had been unoccupied for years and had fallen into disrepair.
“For Mrs Møller, it meant a lot to preserve the house and continue to give it life and history, rather than tear it down, which was probably why she chose to sell it to us and not one of the other two who bid on it,” says Stine.
During the winter, spring and hot summer of 2018, the couple realised both Mrs Møller’s and their dreams. Carpenter Andreas was able to do most of the renovations himself, and friends and family pitched in to help. Bit by bit, the timber cottage was lovingly restored with the utmost respect paid to the original architectural intention. “The house hadn’t been maintained and was in really poor condition, but it also had a fairly modern look and décor that suited us quite well,” says Stine. 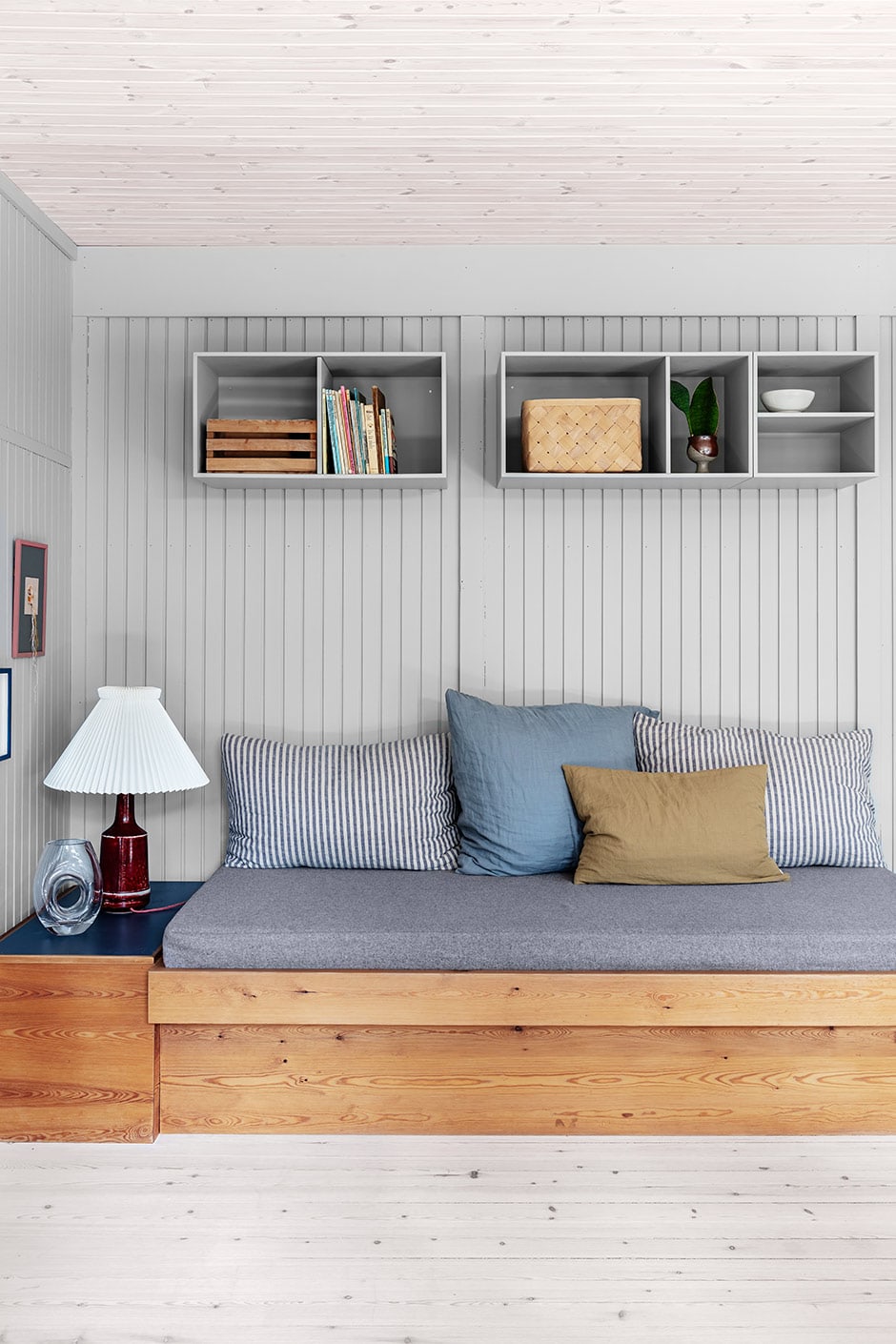 ABOVE The cottage’s internal walls were initially unpainted and the couple wanted to maintain that, but with so many different types of timber used throughout, it just didn’t work. Their chosen grey paint provides a softer contrast between the walls and the black joinery than their other favourite, white, would. This daybed in the living area is another of the solid pieces of furniture that was in the existing house. The couple shortened it and added new foam mattresses upholstered with woollen fabric. The lamp beside it is an heirloom piece from Stine’s grandparents that’s been given a new lightshade from Le Klint.

“The original drawings and the architects’ proposal for what an extension of the house could look like were also inside it when we took over, and along with the other drawings that the municipality had, they’ve been invaluable to us.”
Taking the footprint from 43m2 to 55m2, the couple added two extensions to the original cottage, which house the master bedroom and children’s room. A new roof, ceiling, flooring, windows, exterior doors, bathroom and wood-burning stove were installed, all the woodwork was painted, and a terrace and shed were built.

ABOVE This little alcove beside Vilbert and Herman’s new room was one of the details that Stine and Andreas really fell for. Mattresses covered in the same fabric as the daybed combine with second-hand chairs and bunks, plus fresh canvas for the magazine holder on the wall, which now serves as storage for some of the boys’ toys.

The cottage’s existing kitchen was too neglected to be saved, but with an island, open connection to the dining and living area and cupboard wall with an integrated fridge, it was quite modern for its time, so Stine and Andreas recreated it, but with their own touches. Wonderfully simple and visually cohesive with the rest of the open-plan space, it includes all-but-invisible cabinets from Ikea and Superfront on the back wall, finished with recycled handles.
So sensitive has the update to this cottage been that “in spite of everything we’ve done, it doesn’t feel as if we’ve changed that much,” says Stine. “Some neighbours have visited and haven’t even noticed that we’ve built the extensions, and that was really our wish for the renovation.”