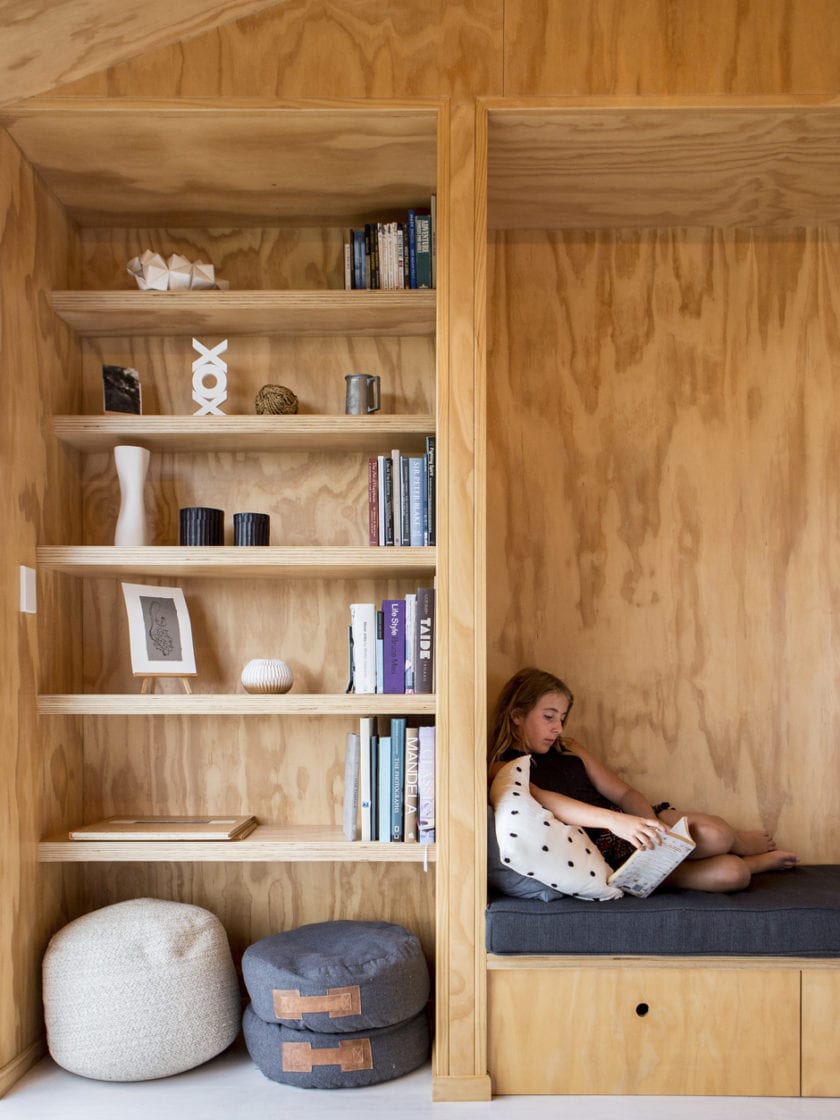 The interior of this compact home atop a hill in Puhoi has been kept tight, but its view is as big as the sky.

Having lived on a boat for many years, the Cooke family knows a thing or two about organising small spaces. “We’re not big-space people,” says Viivi, a Finn with a background in graphic design who met her Kiwi husband, Gareth, through their shared love of sailing.
It’s easy to see how life on the water has affected the layout of their 108m2 home in the backblocks of Puhoi. 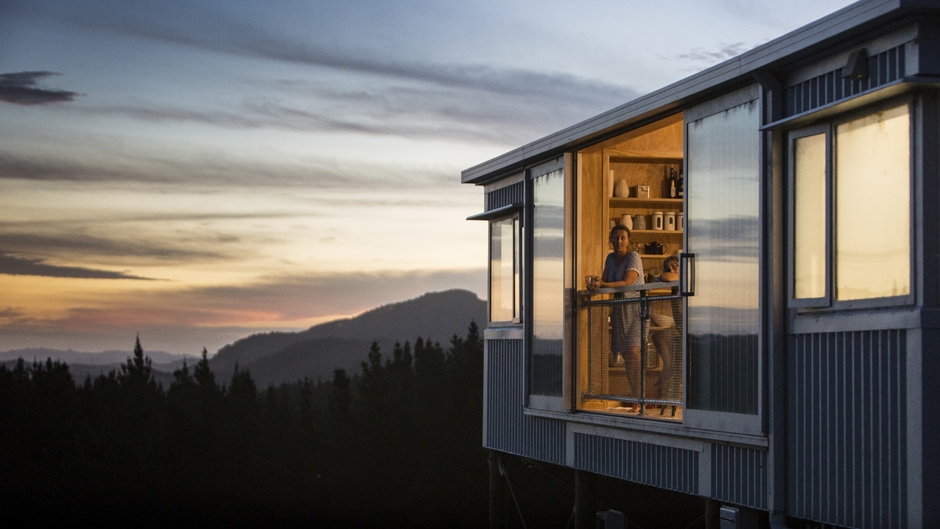 ABOVE Viivi watches the sun set from the kitchen’s bar leaner. The house has doors on all four sides that can be opened or closed to the elements. TOP Siina’s happy place is on one of the daybeds in the living room. The shelves beside it hold some of the family’s few treasures, including a pewter tankard that once belonged to Gareth’s Welsh grandfather, a pair of black containers from Finland and an artwork Siina chose at a kids’ art collective show. “I’m a selective gatherer,” explains Viivi.

The couple was looking for a property on which to build that was commutable to Viivi’s job in the city. “We didn’t want to buy into a subdivision with covenants where they dictated the length of the lawns,” says Gareth. This independent spirit was encapsulated in this site – a wild, exposed acreage on a former farm.
Instead of tucking themselves into a sheltered spot on the 1.2ha, the pair chose to build on top of the hill, where the land falls away towards grassy paddocks. They wanted to have a close relationship with the environment and weather – to watch squalls roll in, see the sun rise and set. 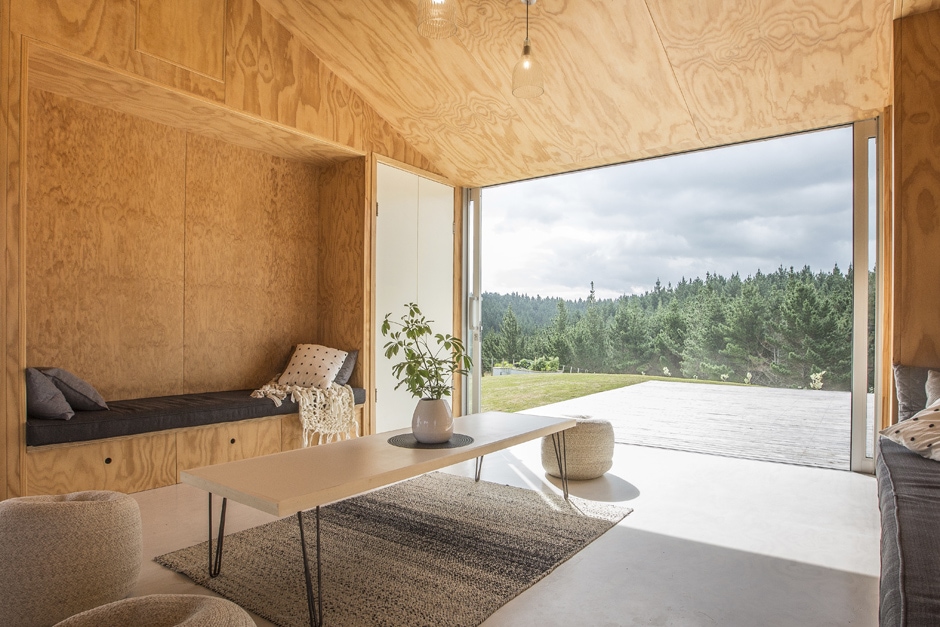 ABOVE The living zone connects to an infinity deck. The couple chose pine ply with a distinctive grain for the walls and ceiling.

They needed to find like-minded folk to help with the design – and when Tim Gittos and Caroline Robertson of Space Craft Architects visited and talked about space in terms of cubic rather than linear volume, they knew they’d met their match. It was Tim who named the home the Viewfinder. It perches like a lantern on the hill with spectacular 360-degree access to the countryside around it.
Wrapped in corrugated steel, the industrial form suits its rural setting but, with glazing on all four sides, it has a lovely transparency too. Inside, the experience is unexpected. It’d be easy
to brand the combination of plywood walls and ceilings, built-in bench seats, minimal furnishings and handcrafted • throws and woollen accessories ‘Scandi’, but Viivi, who should know, disagrees. “It’s how we live – efficiently – and it comes from our boating background.”
The home’s layout is unusual: the footprint is a square with a central cross-shaped, open-plan living area and four corners filled by three bedrooms and a bathroom/laundry. More remarkable is that the wood burner sits not to the side to create a cosy nook, but in the middle of the cross.
The Cookes had imagined a suspended fireplace, until they discovered the cost and opted for this instead. It was a brave move, but it works. “It was tricky to get one that looks okay from the back as well as the front,” says Gareth. “But it’s lovely and radiates heat all around.” 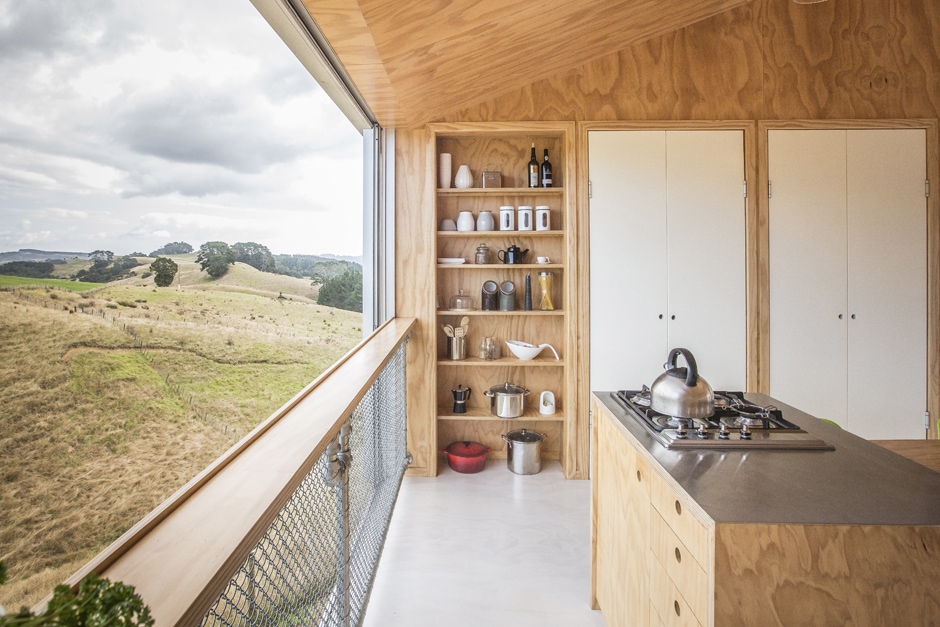 ABOVE There’s not oodles of bench space, but a pull-out rubbish bin and pantry help to ensure the kitchen is entirely workable. “It was an easy transition from the boat,” says Viivi, who crocheted socks for the green dining chairs’ ‘feet’ so they wouldn’t scratch the whitewashed timber floor.

The pyramid-hip roof makes the living area feel much bigger than it is, and beneath the rafters there’s storage aplenty. There’s also storage below bench seats, behind sliding doors and under the floor, where a hatch that can be fed from beneath the house allows enough firewood to be stashed to last all winter. 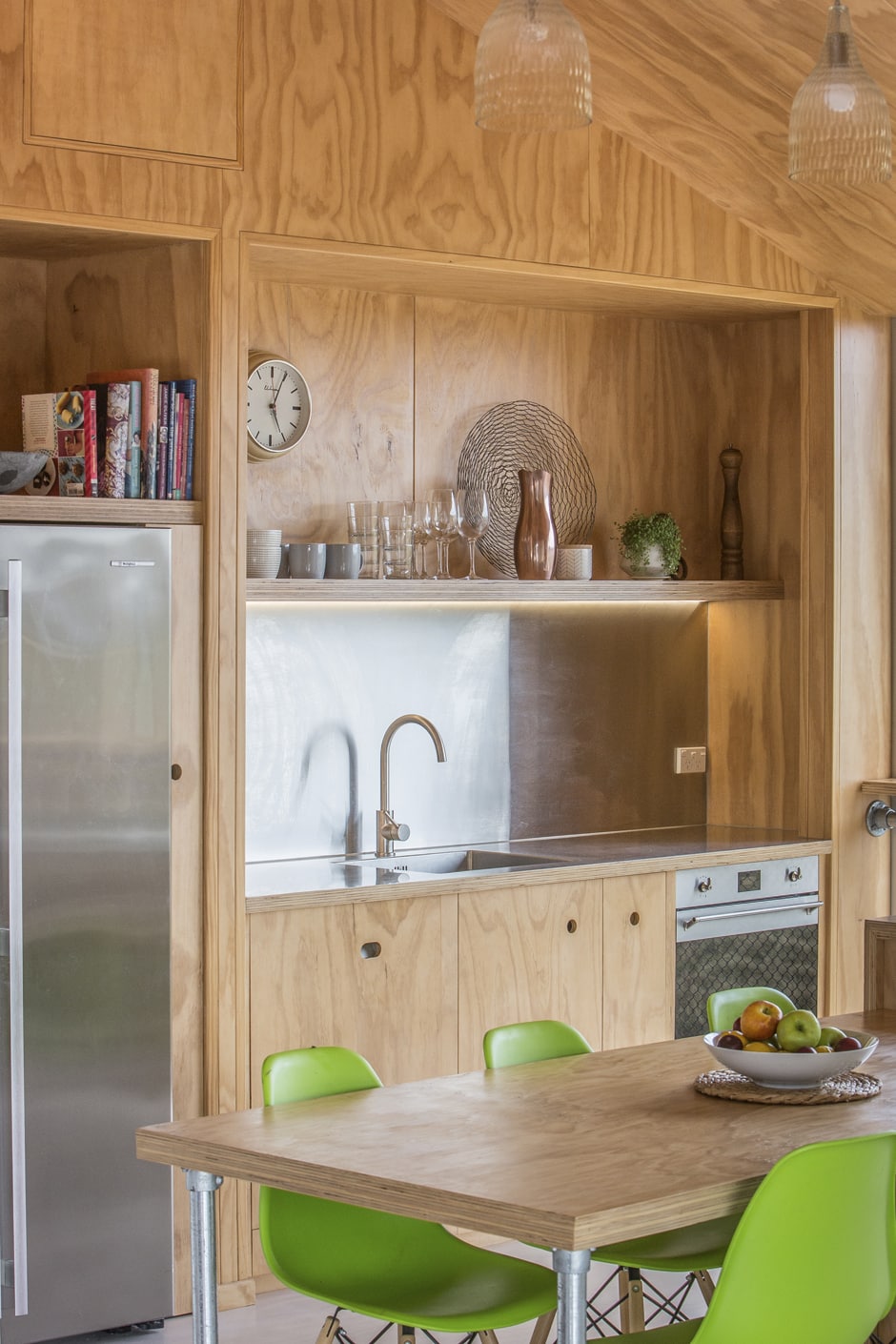 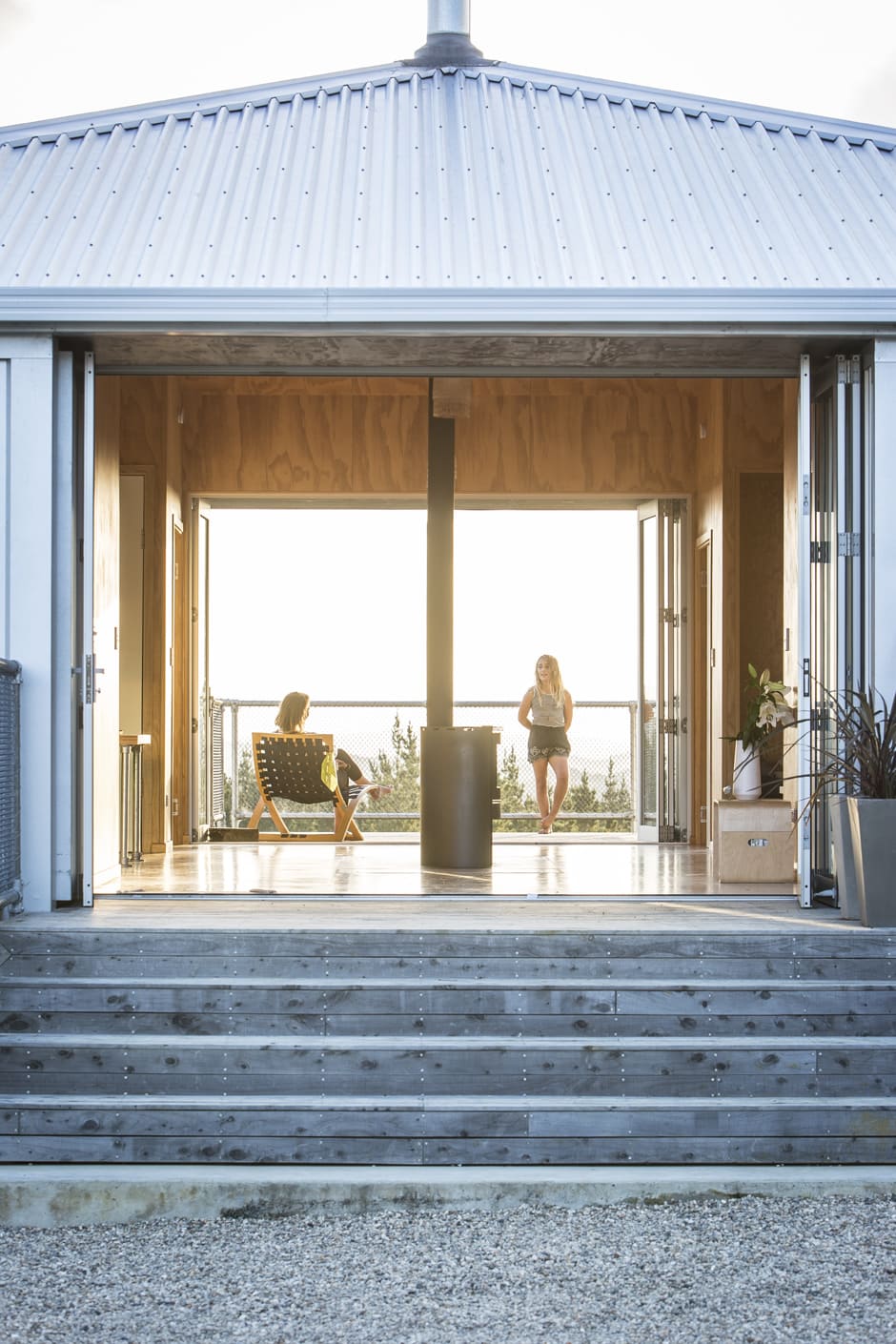 ABOVE The home’s corrugated steel cladding harks back to the vernacular of farm buildings.

To reduce the cost of the project, Gareth, a freelance photographer, took a year out to finish it, stepping up to the task of the kitchen, bathroom, wardrobes and decking after local builder Simon Straka had pieced together the shell. Job well done, the couple and their daughters, Siina (10) and Tiia (8), live here like they would on a boat, opening and closing the house in response to the weather. In the morning, they slide back the doors near the kitchen to enjoy coffee-with-a-view at the bar leaner. In the evening, they move to the western deck to watch the
sun slide into the waters of the Kaipara. 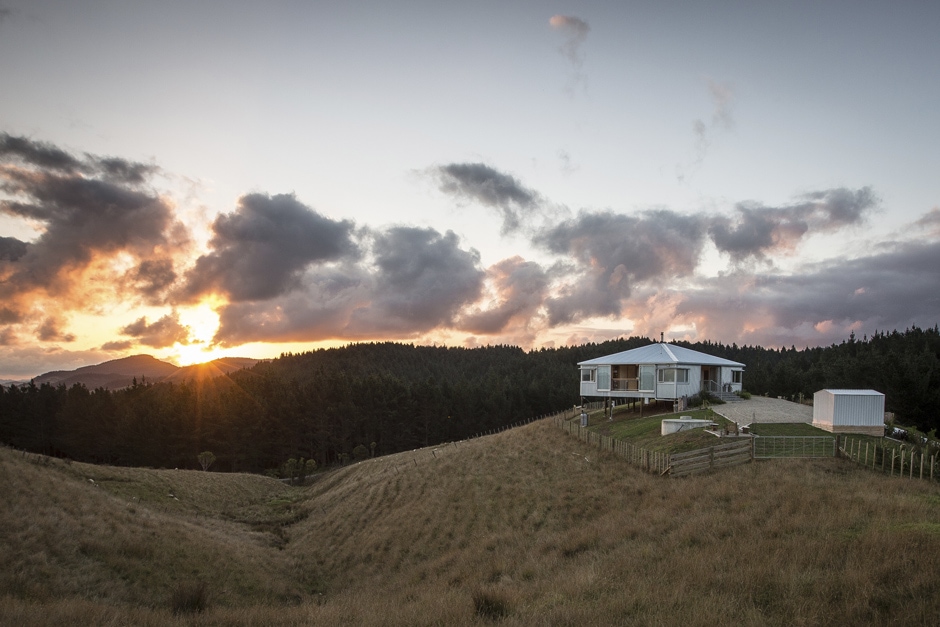 Tiia, who’s a morning person, has a bedroom on the eastern corner of the house, while Siina, who loves the night sky, has the mirror-image room facing west. The girls have had no problem adapting to landlubber life. Big reader Siina finds her heaven on the daybed, and animal-lover Tiia enjoys filling the built-in shelves in her room with finds including a vintage portrait of huia birds and a spray of macaw feathers.
When Viivi gets home from work in the city, she steps through the door and is immediately relaxed. She recalls one summer night when the family carried a picnic up the hill to the highest point of the property and a falling meteor burned across the sky. “We have many special moments here – lots of entertaining moments, lots of calming ones – and all against that lovely backdrop.”