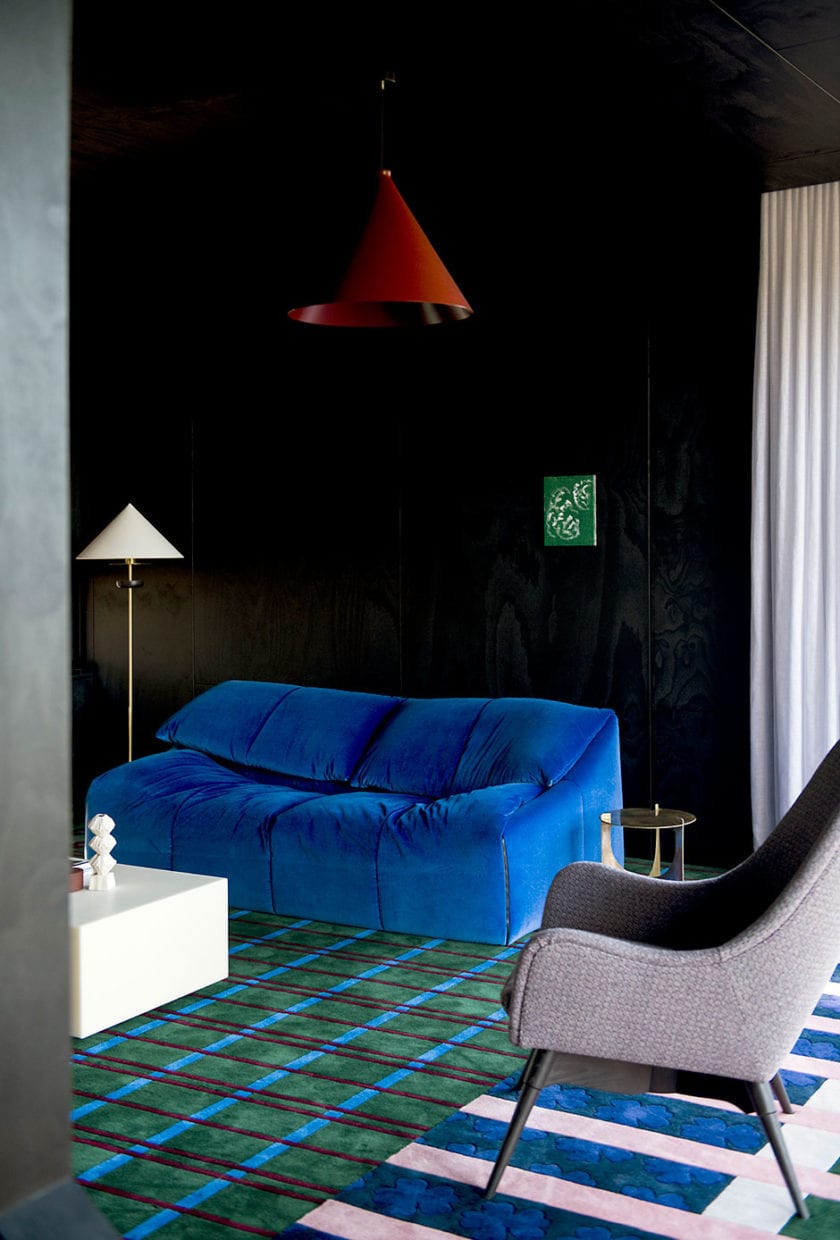 If an artsy, architectural escape designed to take the pressure down is music to your ears, you’d better book your stay.

Every good Australian getaway needs a few marsupials in the mix, and with a wilding quarter-acre backyard in which wallabies often make an appearance, Hobart’s Slow Beam has it covered. But that’s not even the best bit. The designer dwelling is the personal project of Tasmania native Keith Mason and his wife Lauren Bamford, and they’ve filled it with outstanding art.
Unable to purchase property in Melbourne, where they live with their one-year-old daughter Dot, and tired of springing for accommodation when visiting family in Hobart, photographer Lauren and musician Keith began looking into the idea of building a holiday home for themselves (and Airbnb guests) instead — and fate stepped in. “This was the first and only block of land we looked at,” says Keith. “It’s on an older street on the fringe of a bush reserve, the views were impressive, and it just seemed to have loads of potential.” 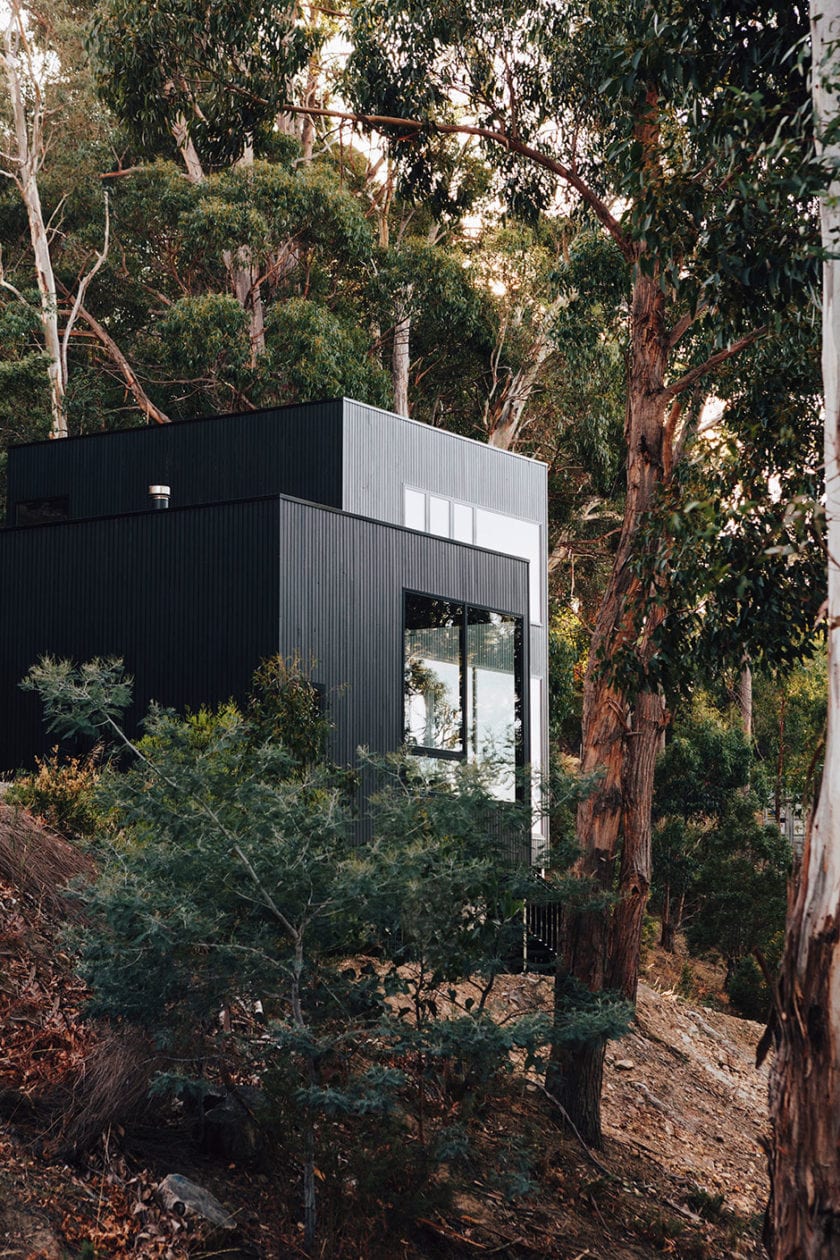 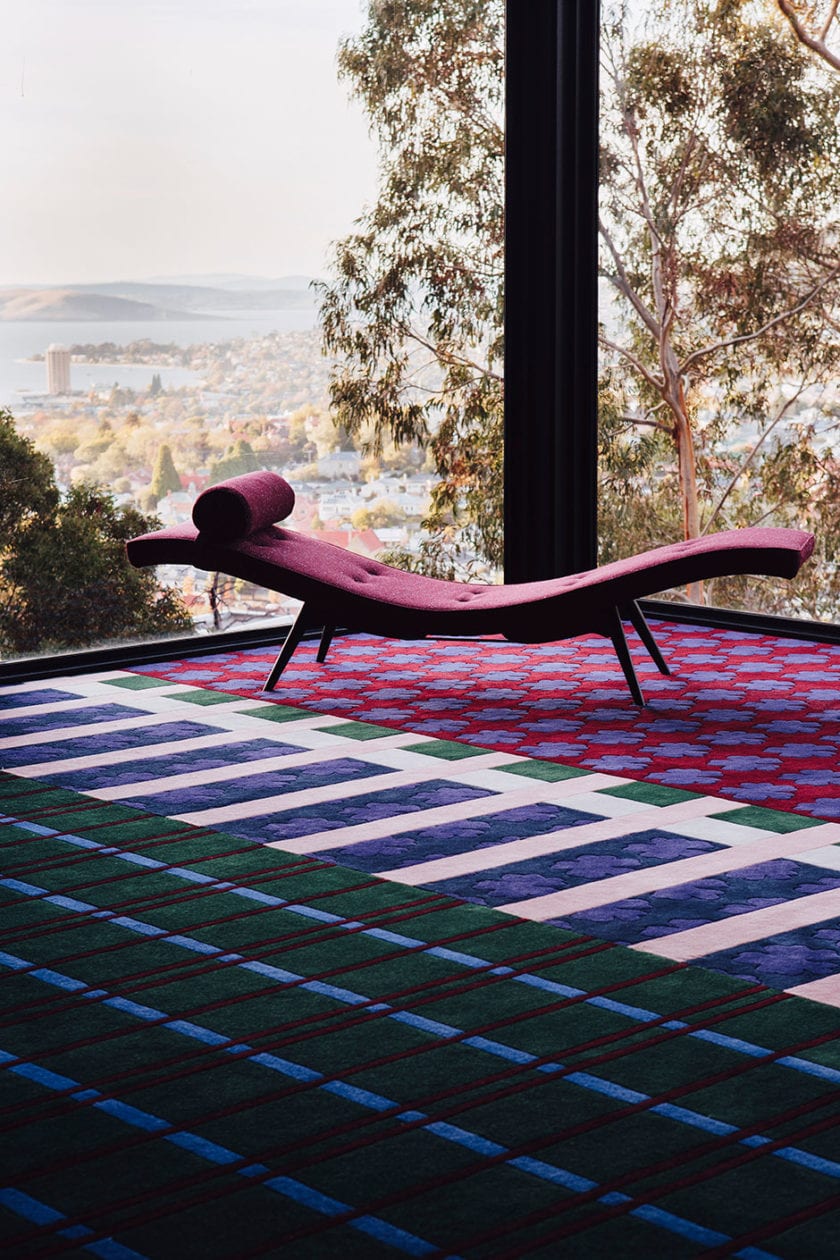 MAIN IMAGE In the living area, a Plumy sofa by Ligne Roset, and an E254 chair and Z300 chaise (see above) by Grant Featherston in Kvadrat/Raf Simons fabric stand on carpet by Esther Stewart. TOP On a steep site surrounded by trees and wildlife, Slow Beam makes you feel like you’re away from it all — in fact, you’re only eight minutes from the waterfront.

Embracing Lauren’s friendship with architect Sarah Trotter, the pair enlisted Sarah’s practice Hearth Studio to develop a two-storey design. The trio were in Melbourne most of the time, but were supported on the ground by Keith’s dad Phil, a retired builder.
“He played a crucial role in keeping an eye on things on our behalf, and would send us wonky phone photos to keep us up to date,” says Keith. “Once the walls went up, Lauren took frequent day trips down to meet with the builder too. A lot of the finishes were quite unique, so she was keen to make sure they translated from paper to reality.” 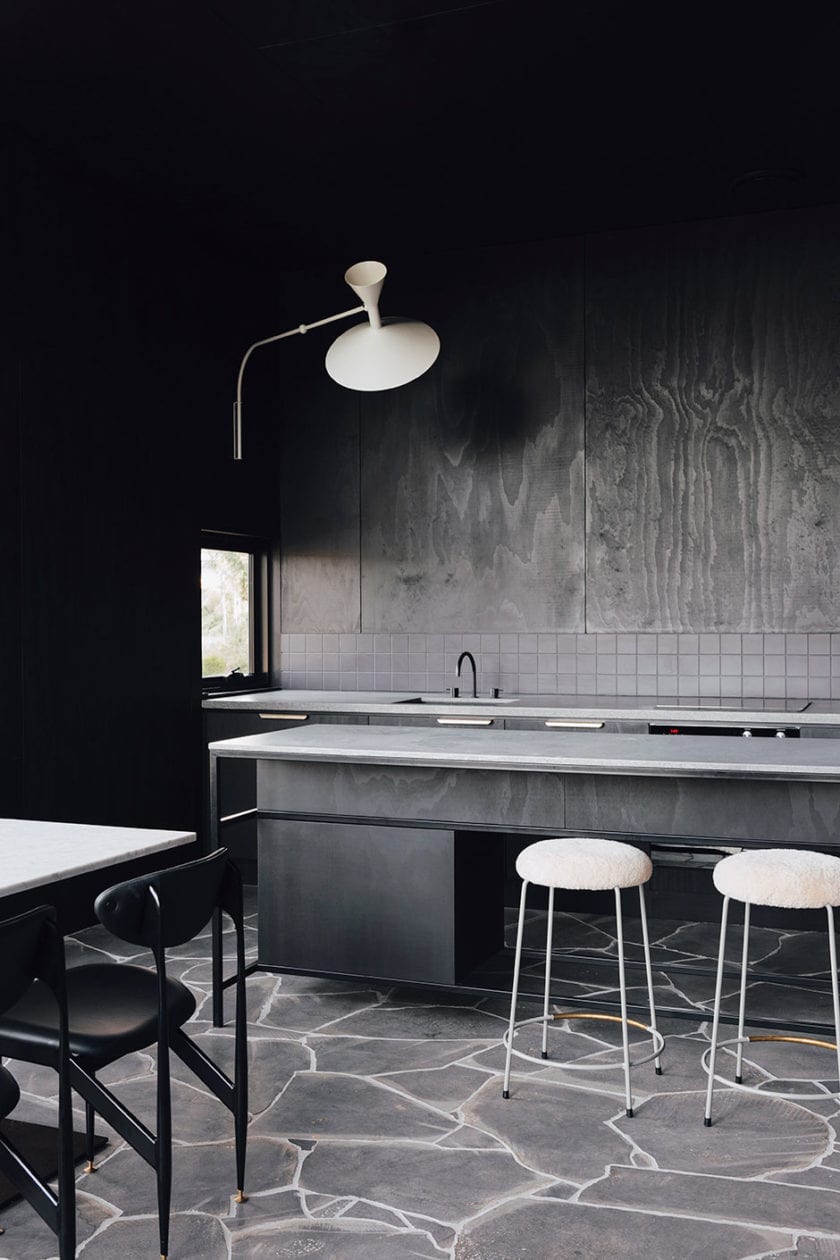 As well as the finishes, the fittings and furnishings are also singularly chic. Lauren and Keith dreamed of showcasing Australian art and design, and the growing roster of creatives whose work is exhibited here includes local luminaries Esther Stewart, Anna Varendorff, Ebony Truscott, Kirsten Perry, Grant Featherston and Fred Ganim, as well as international makers. “Lauren has professional connections to many of these designers and artists, which results in a lot of trades or swaps for her photographic work,” says Keith. 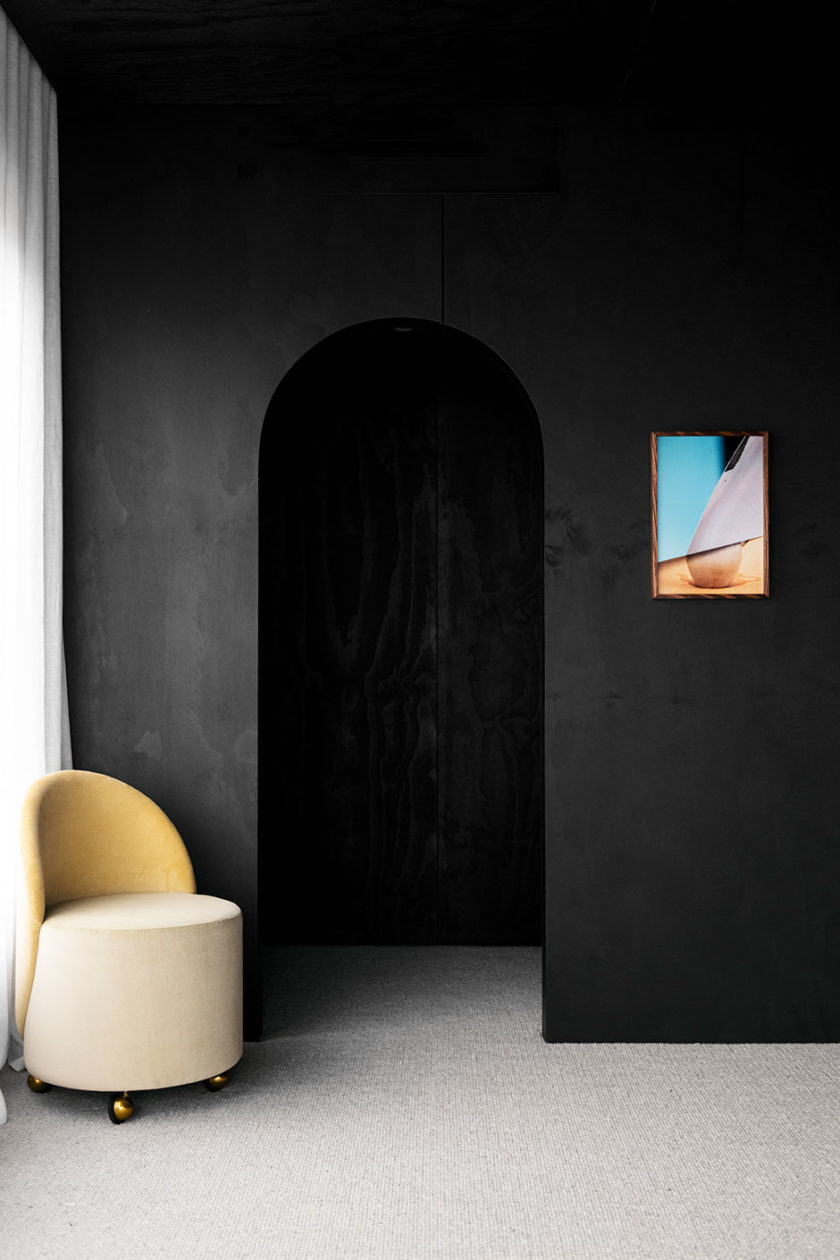 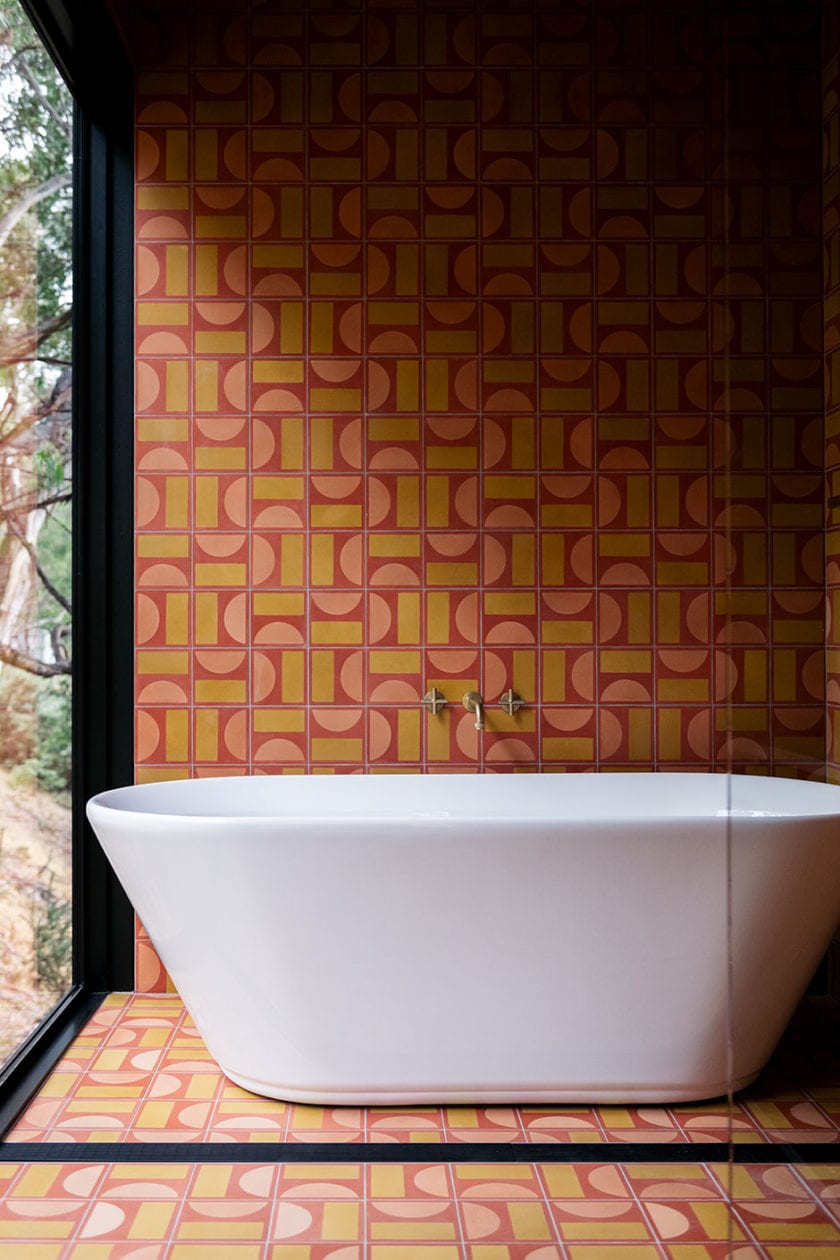 The pair had a dramatic colour palette in mind from the outset. “The Esther Stewart carpet in the lounge was one of the first things we locked in,” says Keith. “Lauren sent Esther some colours she liked, which influenced the final result, then basically everything downstairs was chosen based on that.”
Keith reckons every room here has surprised them and they’re chuffed with how the house looks and feels. “‘Slow Beam’ doesn’t really mean anything, but you do have to slow the car down in the narrow street as you approach, and everything else seems to slow down as you arrive too.” Now the only hurried thing about their visits to Hobart is they always seem to end too soon.
slowbeam.com