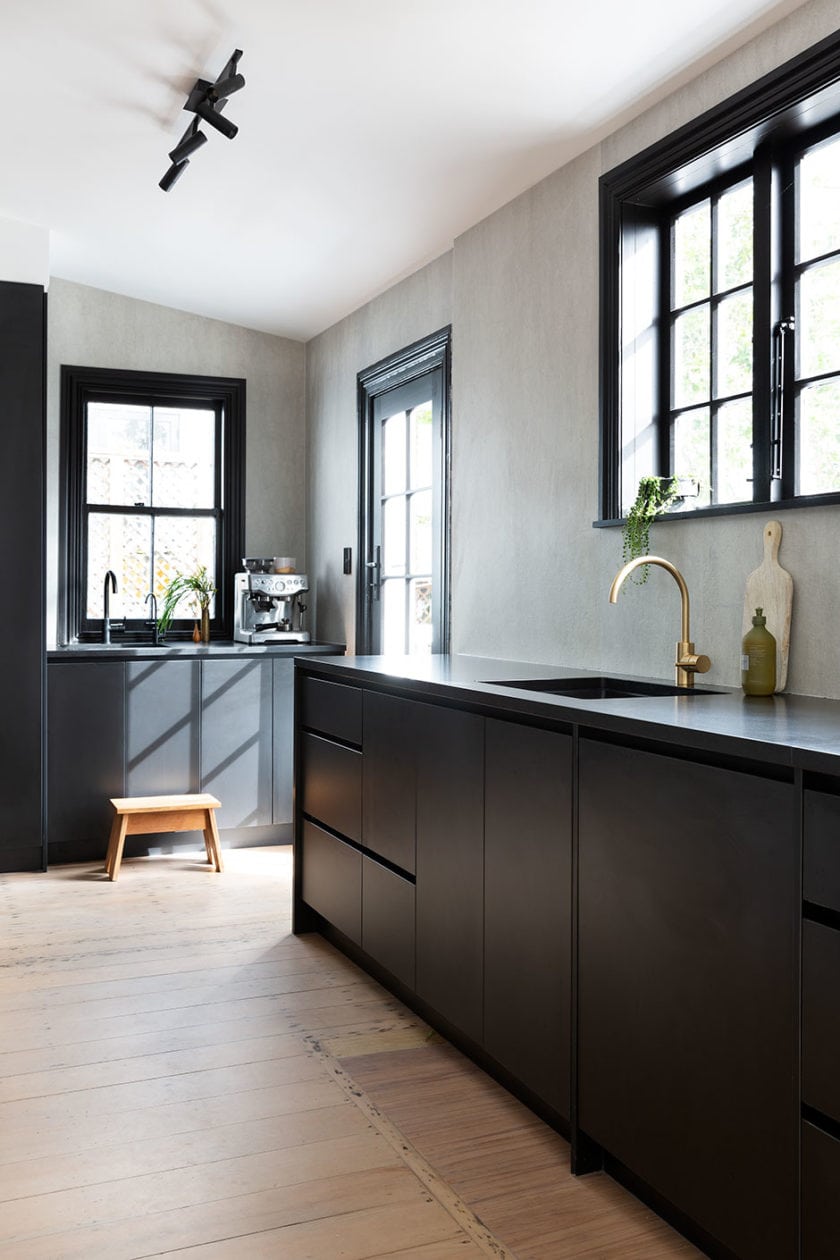 A villa being renovated in stages benefits from the smarts of
its experienced owners.

Sometimes home projects grow on you, and sometimes you can see the potential the minute you step through the door. It was a case of the latter for Gretchen Houston and her husband Blair when they came across their rundown villa in the Auckland suburb of Grey Lynn. “As soon as I walked in, I could imagine restoring the corridor into the most beautiful hallway,” says Gretchen. “I could tell the height and detail would be spectacular.”
It often takes a certain amount of vision to see past the errors of the past when viewing villas with renovation potential, and Gretchen and Blair had to look far beyond the current state of this place to imagine a home they could move into with their daughter Gwyneth (and baby then on the way). “We bought it off-market as there was no way open homes could be hosted here with nine tenants sleeping upstairs and down in a basement,” says Gretchen. “To say it was grotty is  an understatement.” 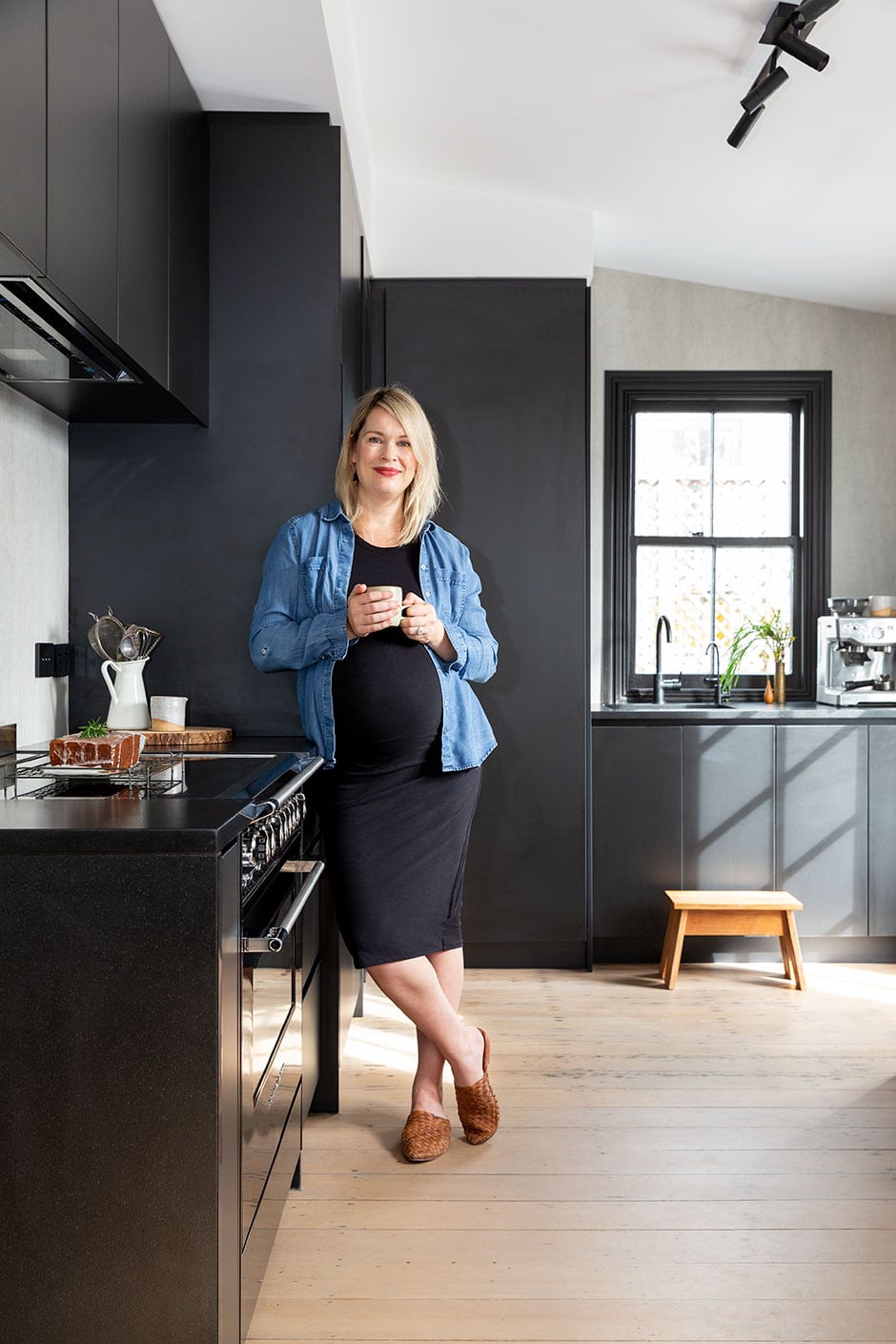 ABOVE & BELOW Built by Kitchen Top, the hub of this home has Black Velvet Melteca cabinetry, a durable leather-finish granite benchtop, large-scale porcelain Laminam tiles and Gretchen’s splash-out item — an Urban Brass mixer by Astra Walker to match the floating shelves custom-made by Powersurge. The laundry incorporated at the end of the space has a lower-cost black tap from Stonebaths. The appliances were another area in which Gretchen opted for the best quality, in the form of a Fisher & Paykel freestanding dual cooker and French door fridge/freezer. The lighting teams simple LED track lights from Lighting Direct with Mini Glo Ball wall lights by Flos from ECC.

Buying a home with fetching mustard walls and blue carpet, a tiny kitchen and a mould problem, the couple had their work cut out for them. Nevertheless, “We knew we wanted to stay in Grey Lynn as Gwynnie was about to start school and we love the area, but we were keen to free up some capital for other things,” says Gretchen. “We’d only owned bungalows before and really wanted a villa with a north-facing semi-flat backyard at the right price, and this fit the bill.” Straight, sturdy walls and floors are hard to come by in 120-year-old villas, so having both these boxes ticked made for a structurally sound start to the makeover, which the couple plan to execute in two stages as time and money allow. Step one has seen alterations made within the current footprint, then step two will involve extending the kitchen and living zones out the back.
They’d overseen an update of their previous home, a place they’d purchased half done up, so Gretchen felt confident she could take the lead and make the step-one dream a reality. Calling on the services of a draughtsman to help reconfigure a couple of walls, she oversaw every other detail, sourcing all the materials, fixtures and fittings herself. 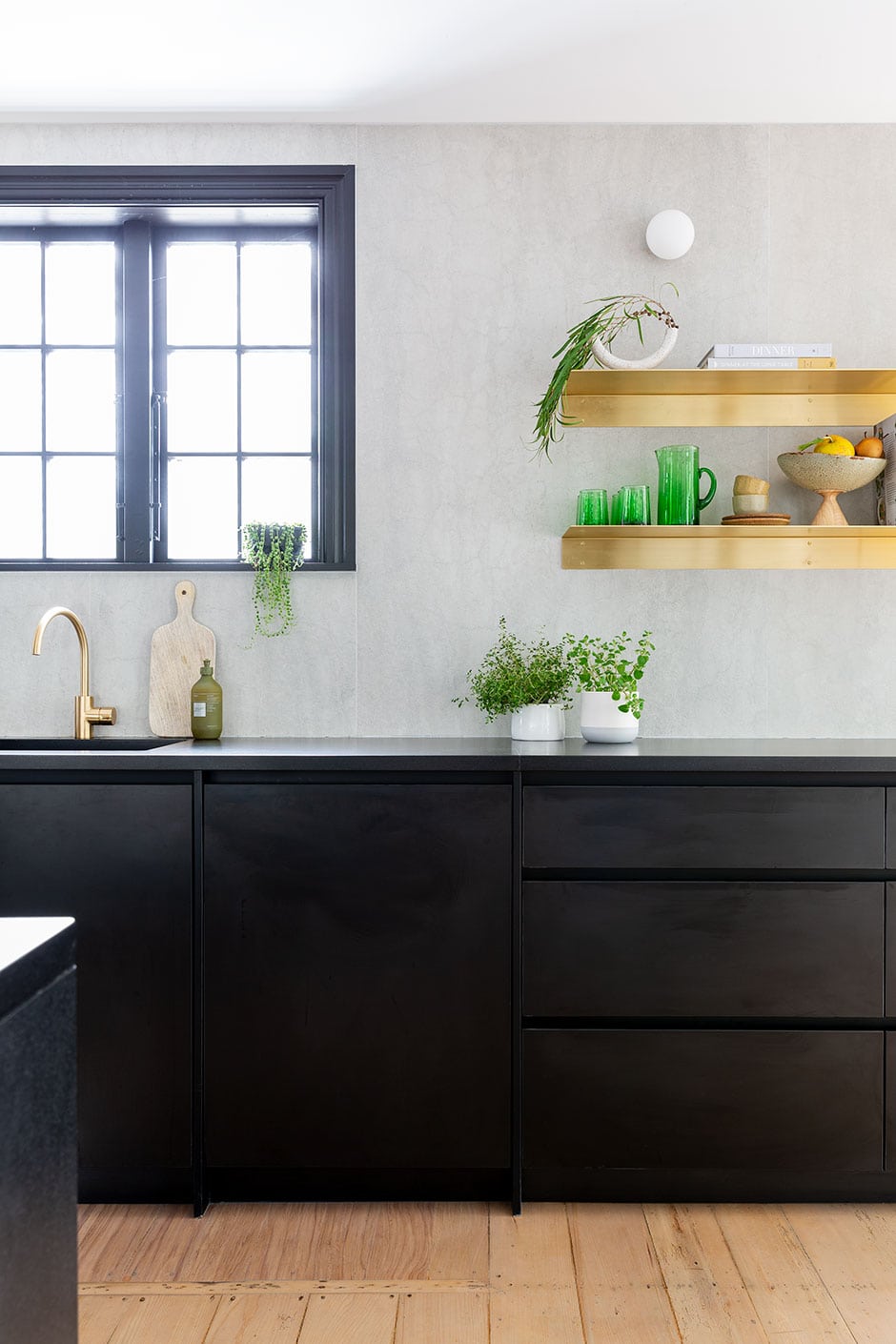 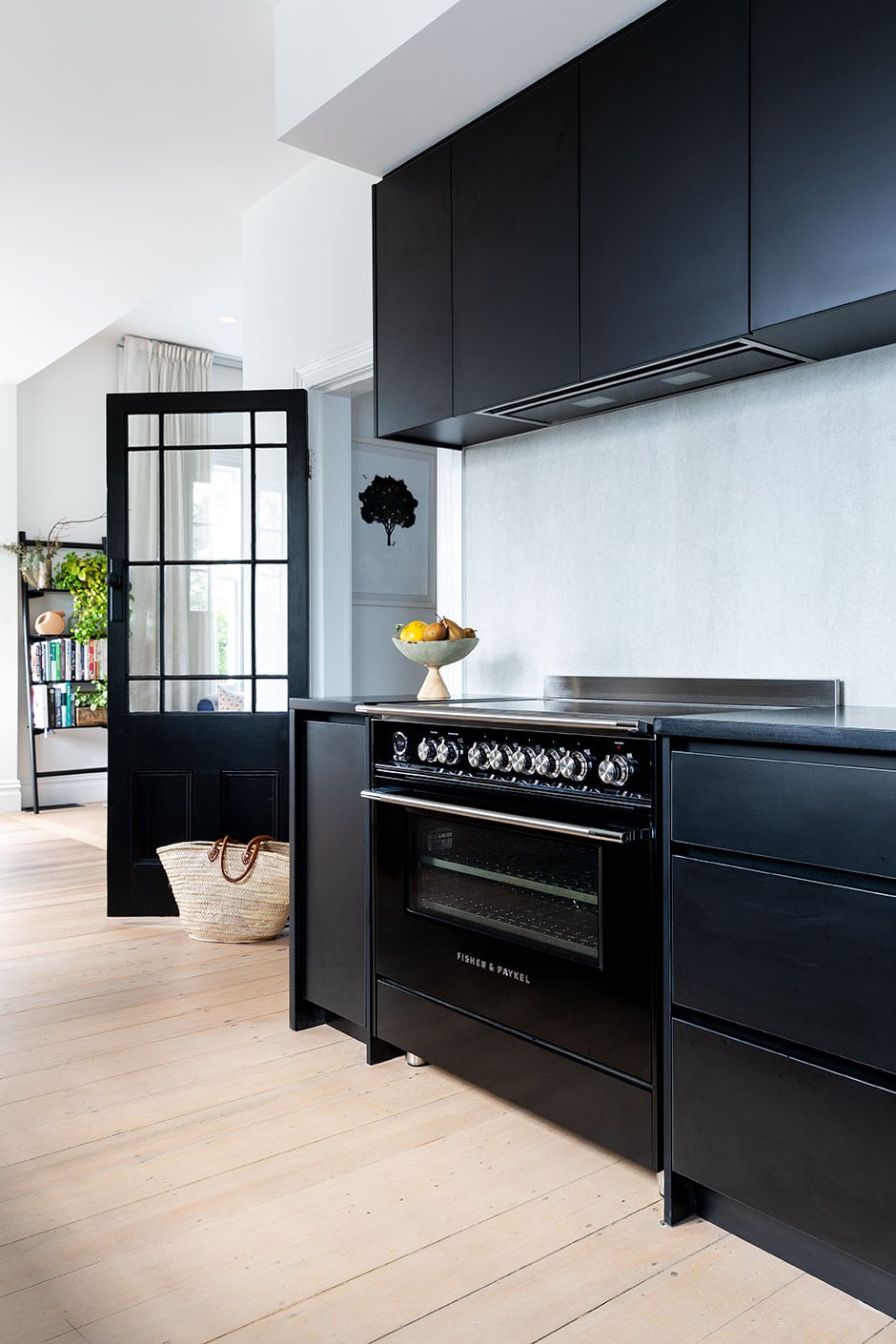 “Our last renovation seemed a lot simpler because it only required a new kitchen and a few walls to be moved,” she says. “It was still full-on, but it hadn’t entirely prepared us for the mammoth task ahead. This time around required decisions to be made about every single part of the house. We stripped it back to its bare bones, re-insulated, gibbed, upgraded the heating, and redesigned the kitchen, lounge, bedrooms and bathroom.” 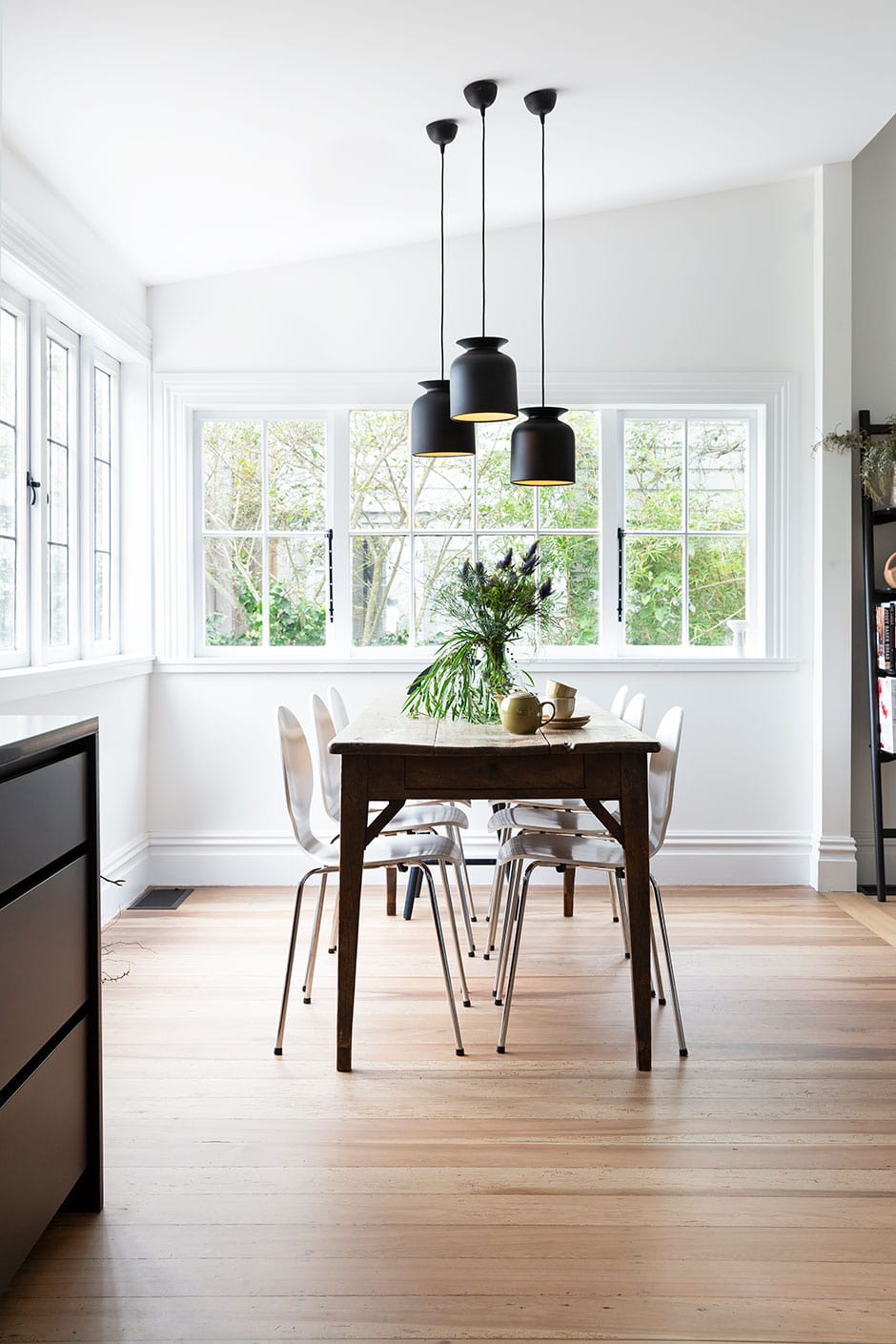 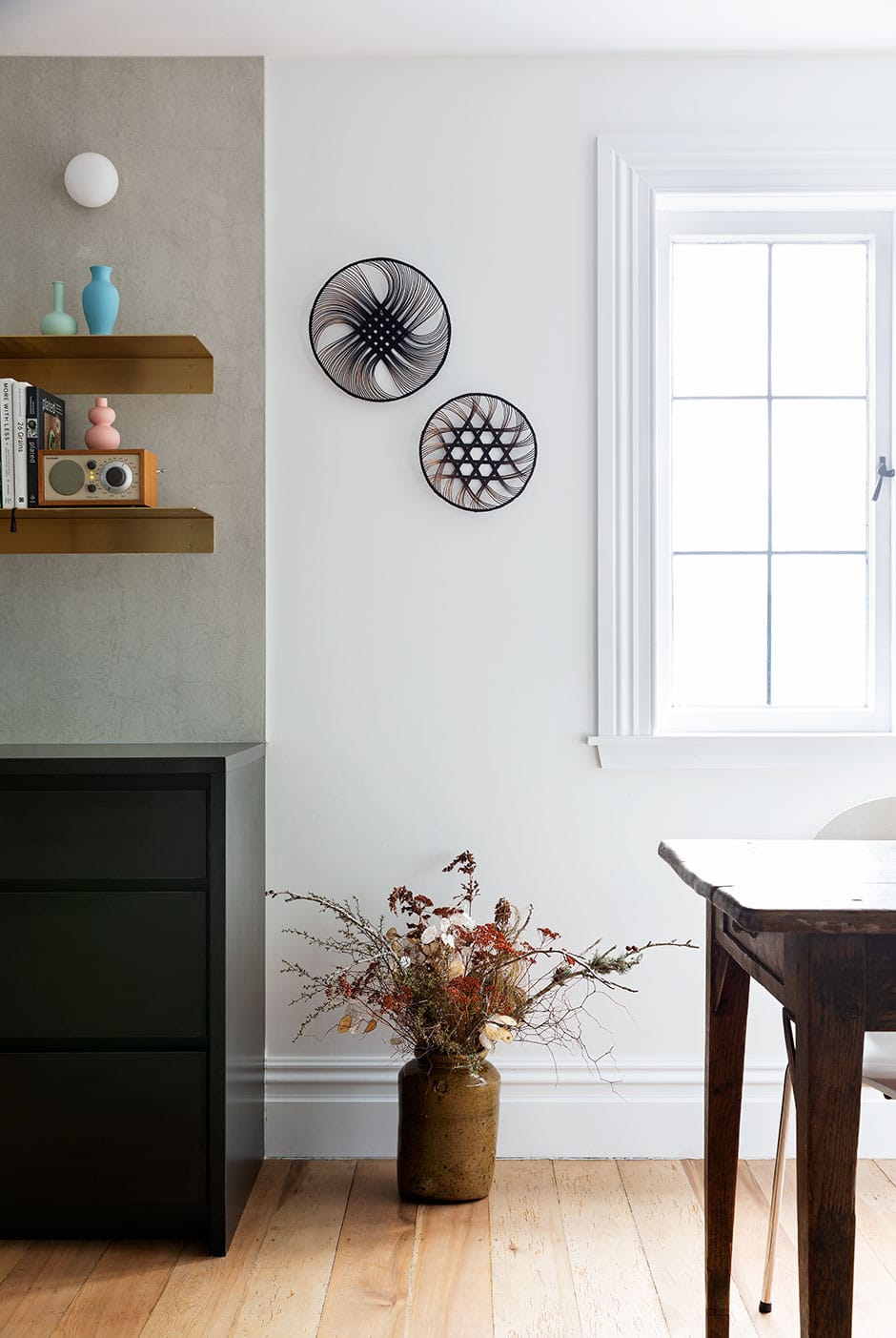 ABOVE “We all love to cook, including Gwynnie, so the kitchen and dining area is where we spend most of our time as a family,” says Gretchen. “The light coming into the dining area is perfect for photographing food and the stark black benchtop and concrete-look walls make a dramatic backdrop for moodier photos.” The couple chose chairs from Design Denmark to go with their dining table from Vitrine.

Given Gretchen’s line of work as a food stylist and recipe developer, kitchen design is something she has a natural affinity for, and despite her and Blair’s plan to extend this room down the track, she had future-proofing in mind with the immediate work being done. Strategic spending on items that could be reconfigured at a later date drove the decision-making around the materials they chose. Opting for affordable cabinetry and surfaces saved money in these areas so they could splash out on appliances that make working from a home kitchen more efficient. 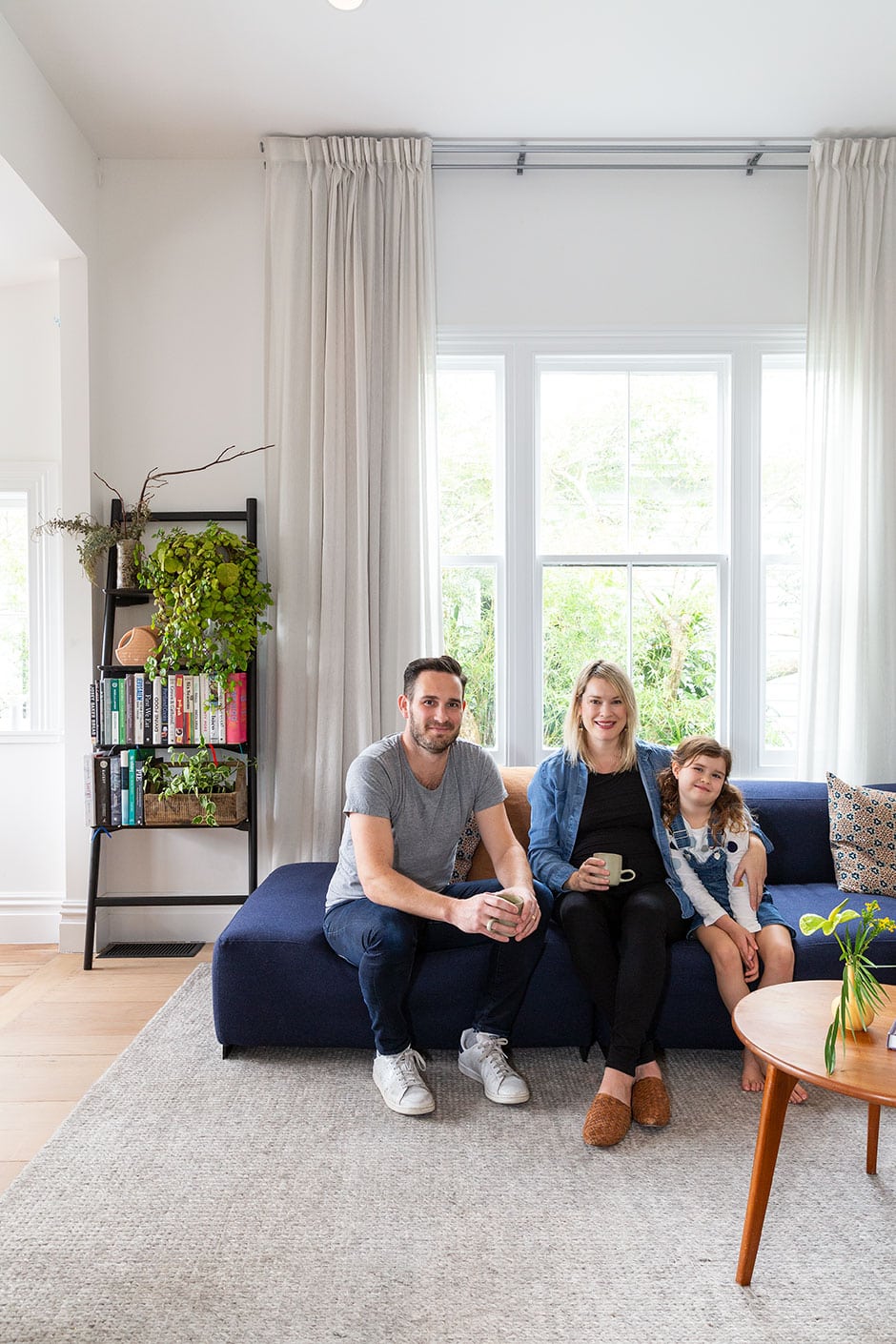 ABOVE In the living room (and bedrooms), Gretchen and Blair redid the ceilings, removing the battens in favour of clean lines. Everything from there down to the skirting boards is painted in the same white, Dulux Waitoa Quarter. The Tosta leaning shelf by Sketch is from Bauhaus, the Aiko sofa is from Città, the Sierra rug is by Armadillo & Co from The Ivy House and the vintage coffee table was found on Trade Me.

“Appliance-wise, I’m a sucker for clean lines and a completely integrated look — that way, when the kitchen’s in chaos, as it usually is, it somehow feels less cluttered,” says Gretchen. “I wanted to buy once and buy well, so we opted for high-quality Fisher & Paykel appliances that will last and that I can continuing using later on in my phase-two kitchen as well.” 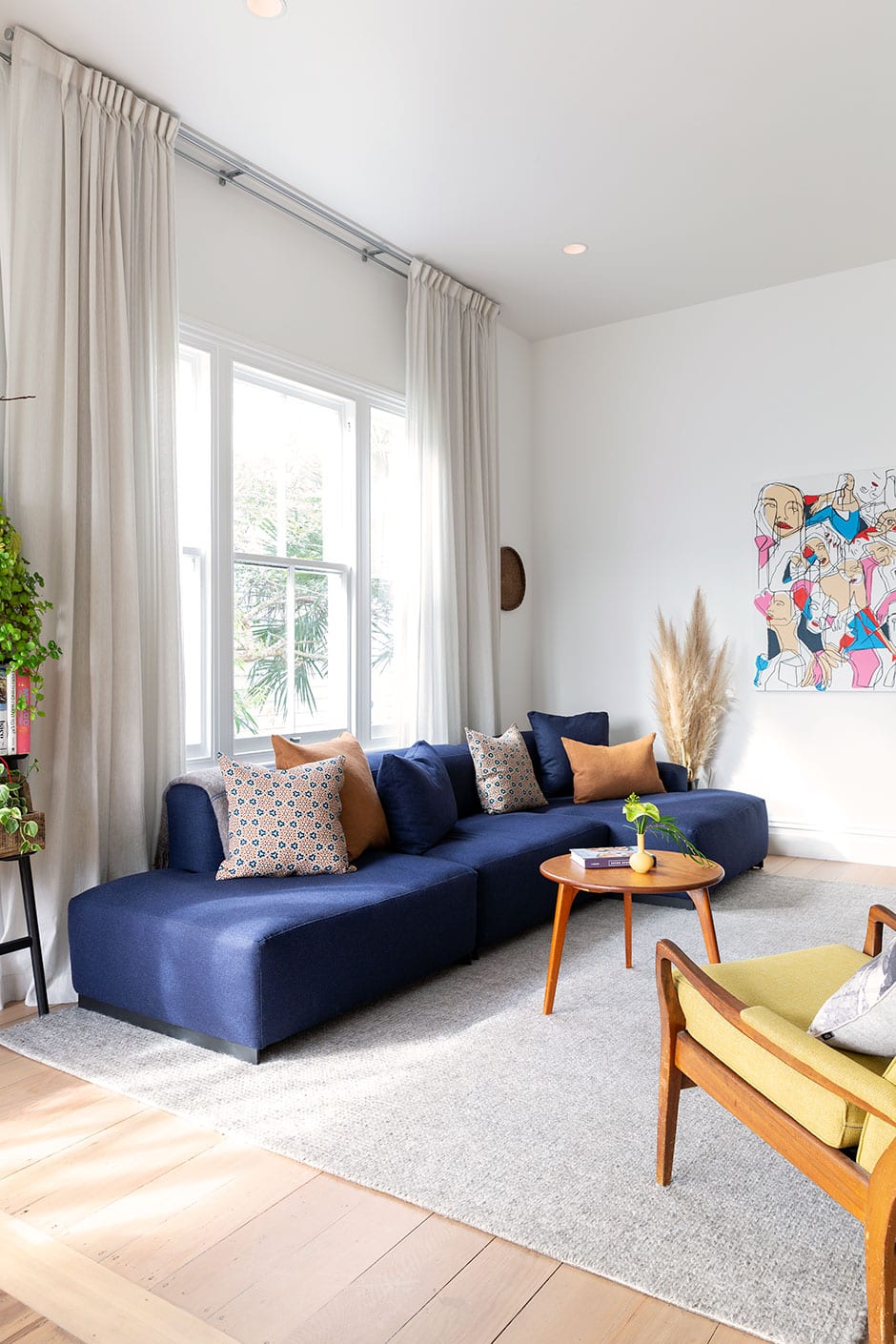 ABOVE Cushions from Thread Design and an Unfolding artwork by Holly Schroder enliven this space along with a mid-century Don chair that belonged to Blair’s great uncle and has since been reupholstered.

The classic yet contemporary bathroom is another standout space in this home. Wanting to create a spa-like feel, Gretchen focused her sourcing around a palette of natural finishes. A floor-to-ceiling shower screen separates the vanity and toilet from the wet zone that includes bold black tapware and fittings and a deep freestanding bath. Handmade Moroccan tiles line this room, bringing a tactile sense of warmth to the pale colour scheme. 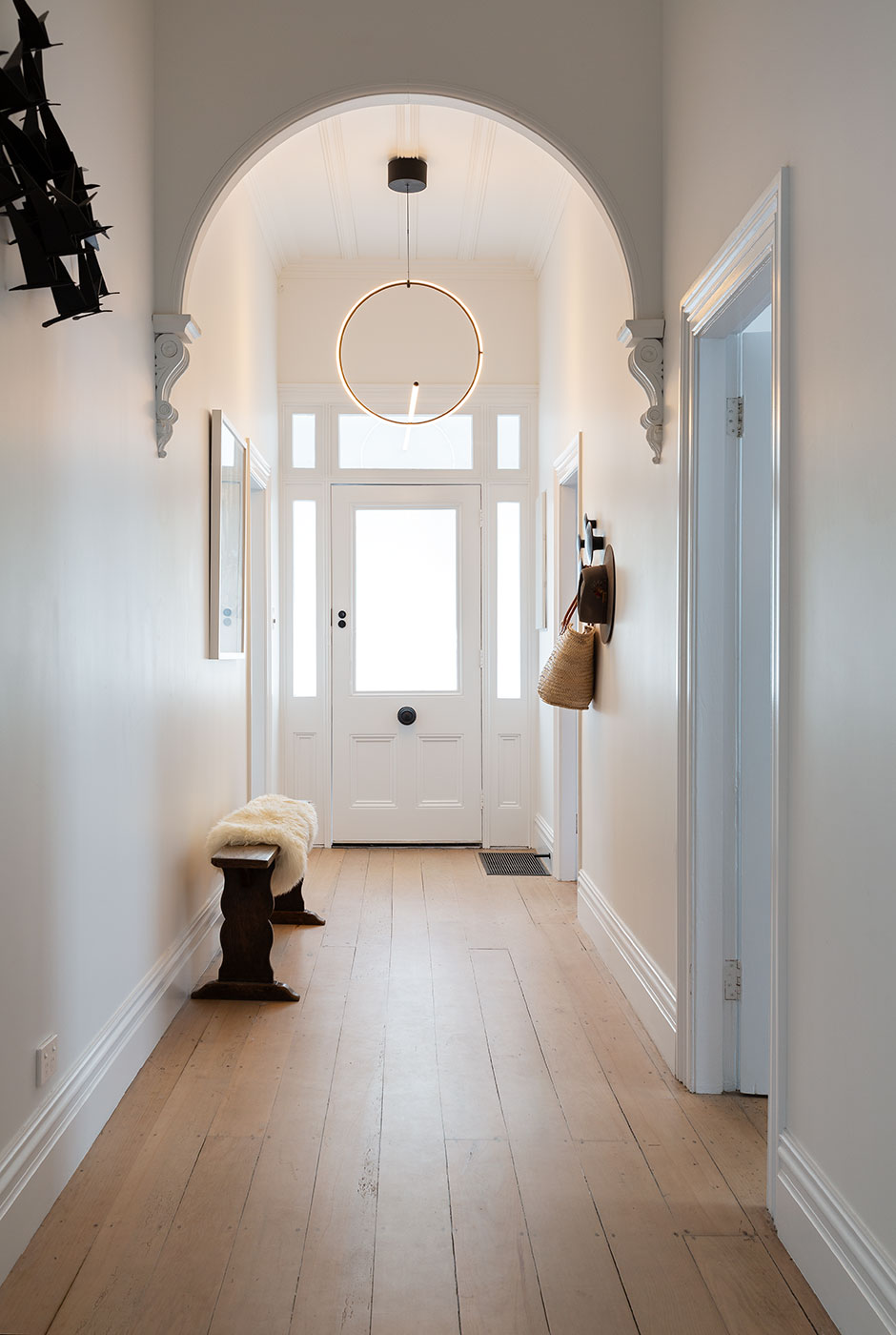 ABOVE The couple respectfully restored the hallway’s batten ceilings and archway. Protected by that ghastly blue carpet, the kauri floors were in amazing condition, so they were stripped back to their original light colour, then sealed with a no-sheen invisible finish. “They almost look undone, which I like,” says Gretchen. Presiding over the entryway are two Arrangements pendant lights by Michael Anastassiades for Flos from ECC.

“The tilers were terrified of the handmade tiles in the bathroom,” jokes Gretchen. “They’d never worked with them, and kept telling me they were seconds, chipped and uneven. I had to reassure them so many times that they were perfect and the exact look I wanted.” 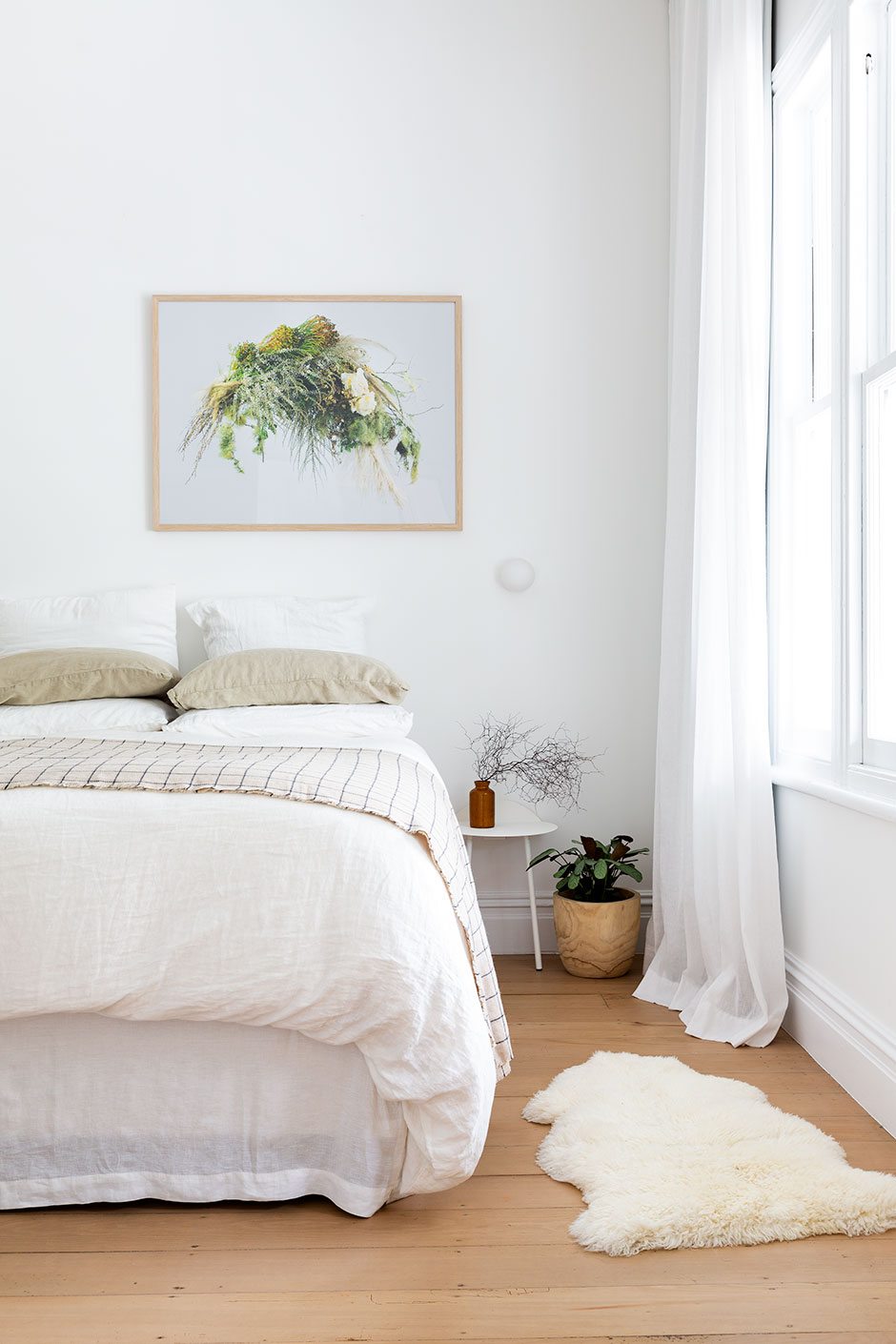 ABOVE Sweeping French linen curtains were installed in the bedrooms in an off-white hue (and in dove grey in the lounge). Also contributing to the relaxing feel of the master bedroom is bedding from Città and a rug from The Sheepskin Factory.

After all these deliberations, Gretchen and Blair have learned the art of letting go when it comes to some things, whereas with others they’ve been pleasantly surprised by the success of their decisions. “Although I have a clear idea of what I do and don’t like, I’m more of a wing-it type of person who decides things as I go along, rather than having a master plan, so it’s rewarding to see it all working together,” says Gretchen. “We particularly love coming home to the changes in the front of the house, compared to the shabby mustard that was there.” 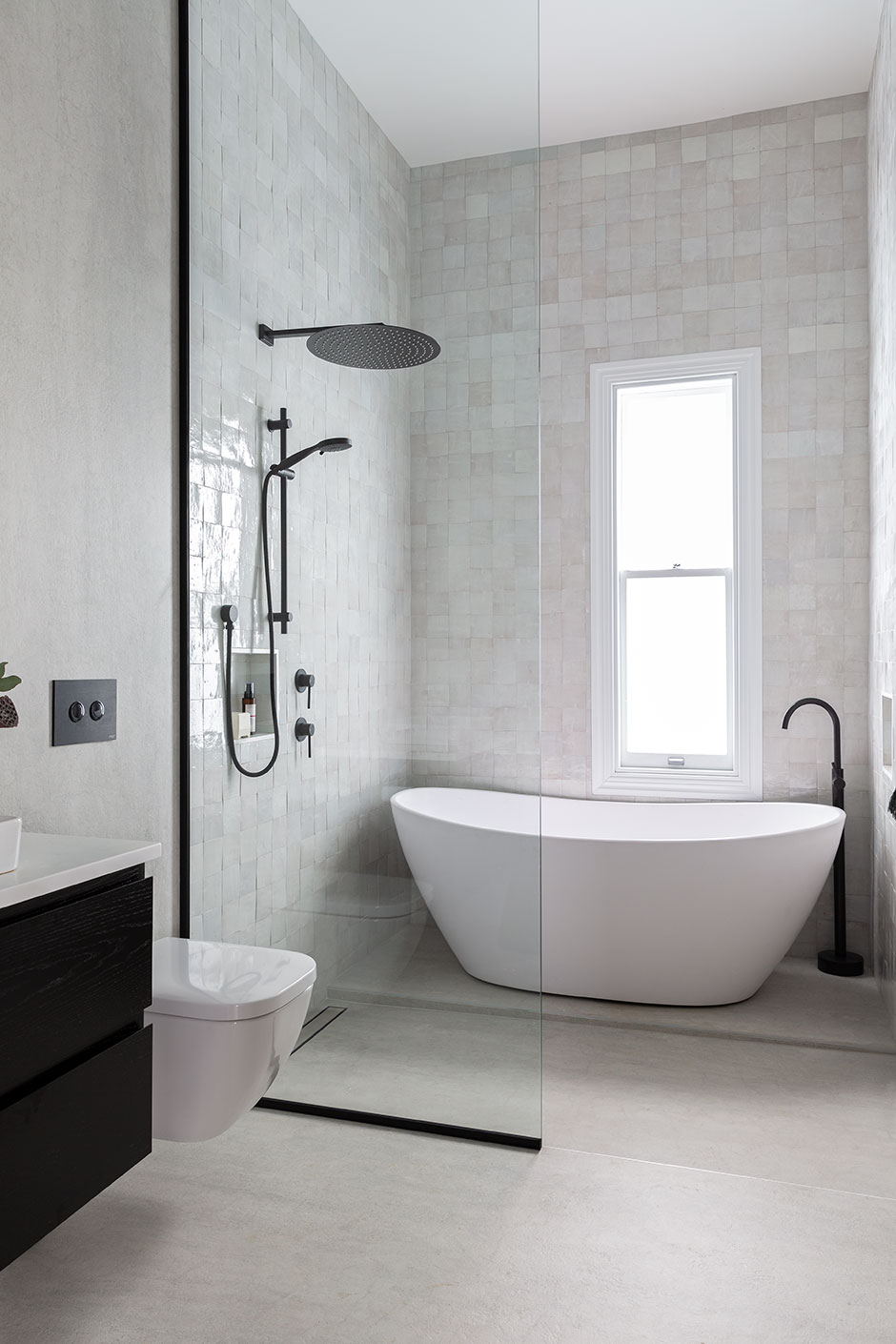 ABOVE Those Laminam tiles used in the kitchen appear in the bathroom too, along with handmade Moroccan tiles from Artedomus that run all the way up to the 3.3m-high ceiling. The couple had planned to frame the shower door in black steel to match the black tapware and fittings from Stonebaths and Metrix, but it took a while to make, and after enjoying it bare for a few weeks, they ending up deciding to leave it that way. The deep bath is also from Stonebaths.

Now the builders are out of the house and that gorgeous hallway is fully realised, the couple can put their feet up and enjoy the restful space they’ve created. It won’t be calm for long, though. With the arrival of a sister for Gwynnie, born not long after we visited, they’re going to be busy with another new project — this time of the family kind.