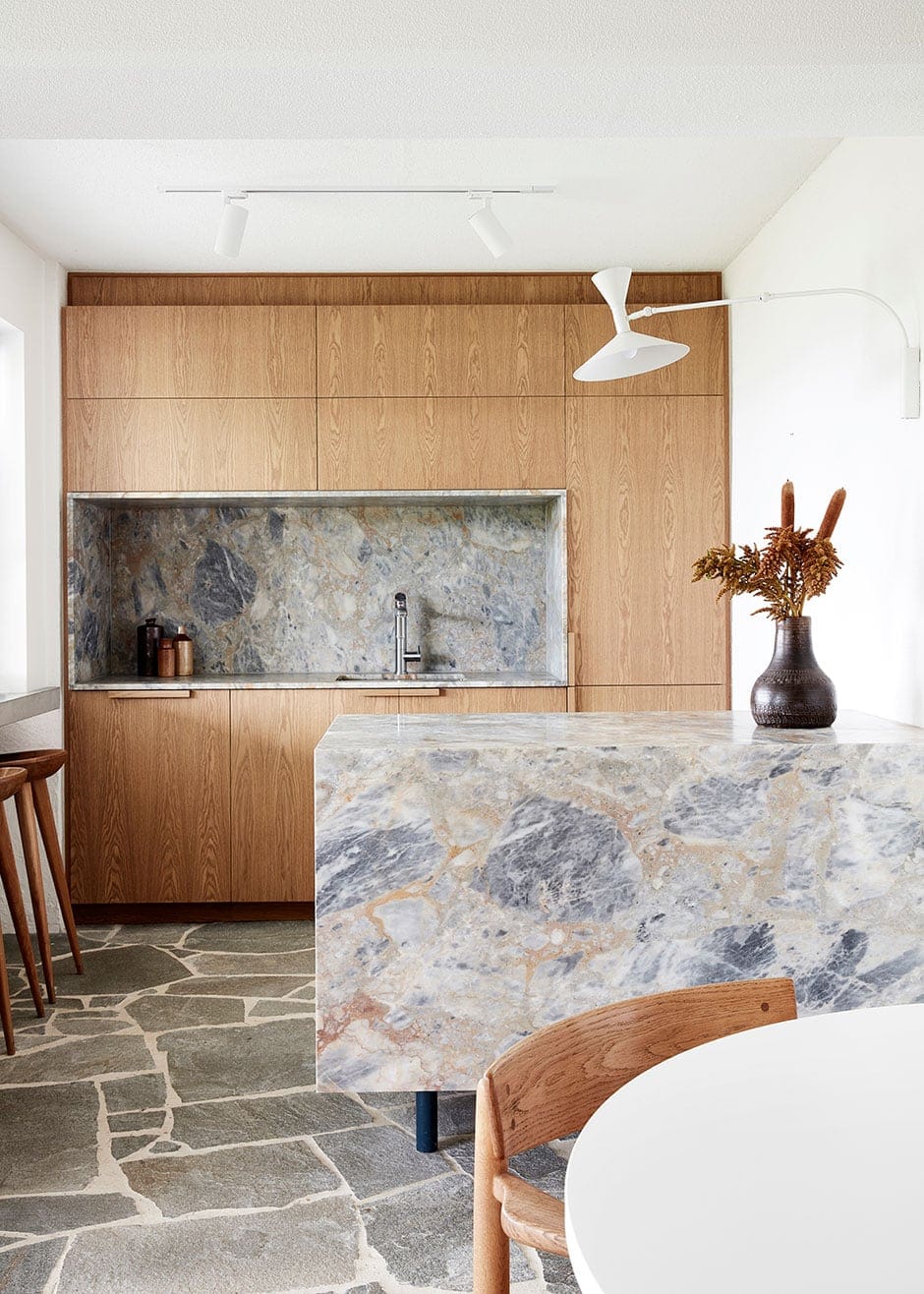 The six-bedroom renovated coastal dwelling just outside of Melbourne is the definition of sophistication.

When a covetable clifftop property overlooking the ocean goes up for sale for the first time in 35 years, eyes near and far fall on the prize. In the case of this beachside beauty in Australia’s Portsea, it was a lucky local couple who ultimately struck gold. 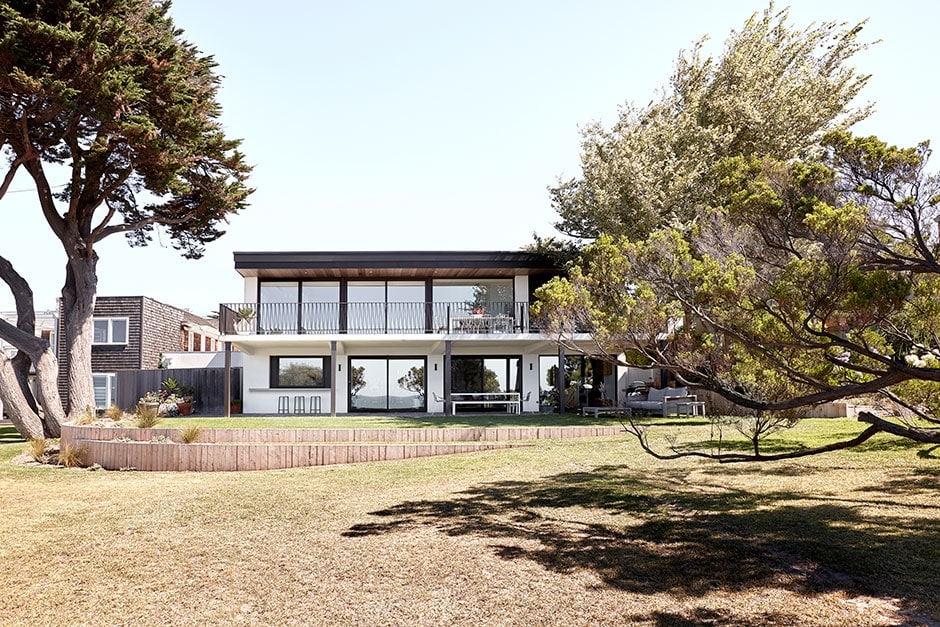 The happy acquisition was the next step in their multi-generational journey in the coastal town near Melbourne. The parents of one of the homeowners had a home here for many years that was a cherished destination for extended-family holidays. Later, the couple took on and slowly renovated the property, and now this move just a few blocks away sees them beginning an exciting new chapter. 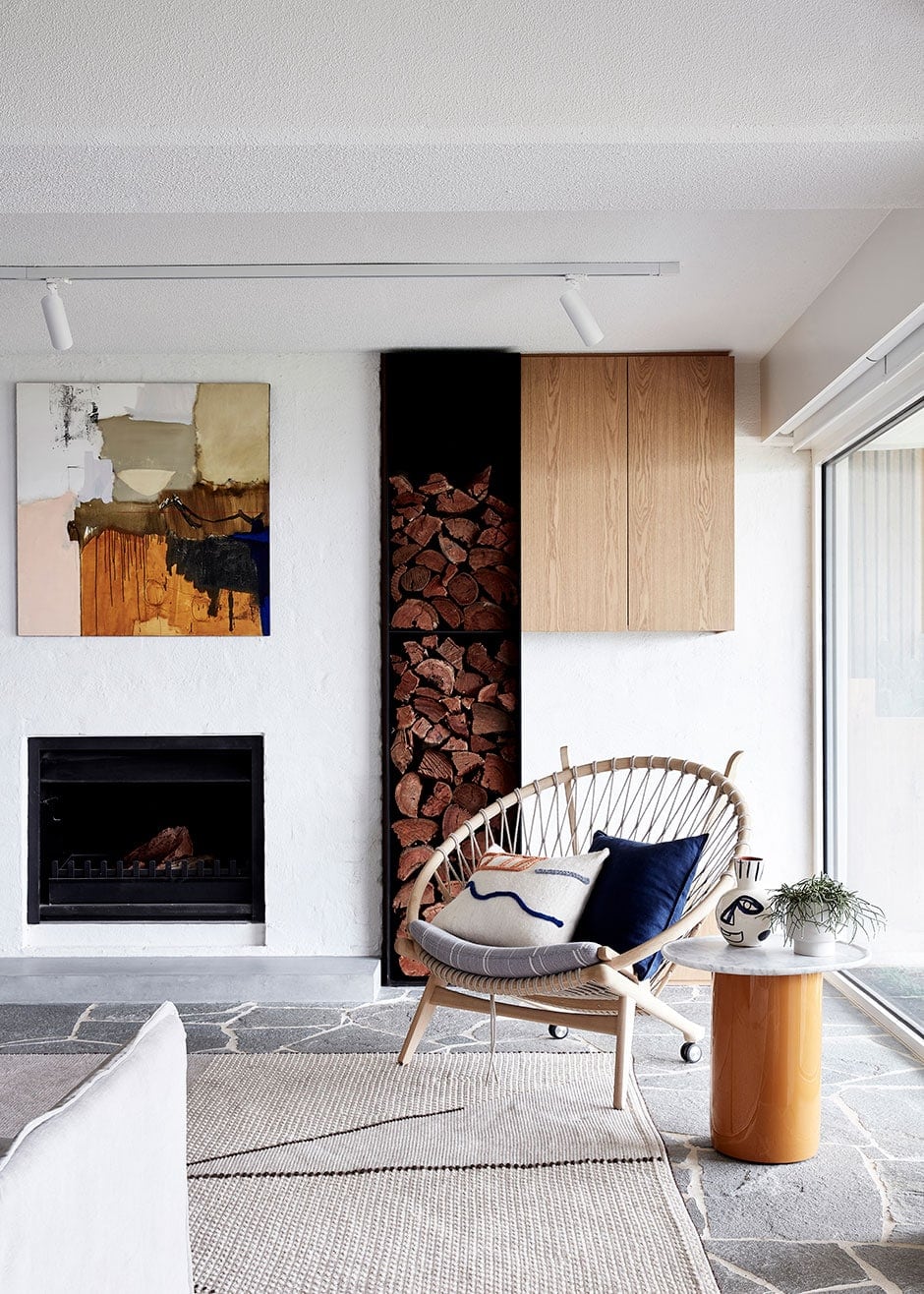 ABOVE “We’ve been fortunate enough to visit the house and experience its beautiful calming effect in summer and the cooler months,” says Sarah. “There’s something very special about watching the ocean while rugged up by the fire.” Key pieces in this ground-floor living space include an artwork by Waldemar Kolbusz and a PP130 Circle chair by Hans J Wegner.

When they took the helm of the two-storey mid-century home, it was structurally shipshape, with a sun-drenched northern aspect, a view of the waves and access over the rocks to the sand and boat moorings below, but the interior was tired and bland. Beige on beige with outdated fittings was not going to work — it was time once again to renovate. 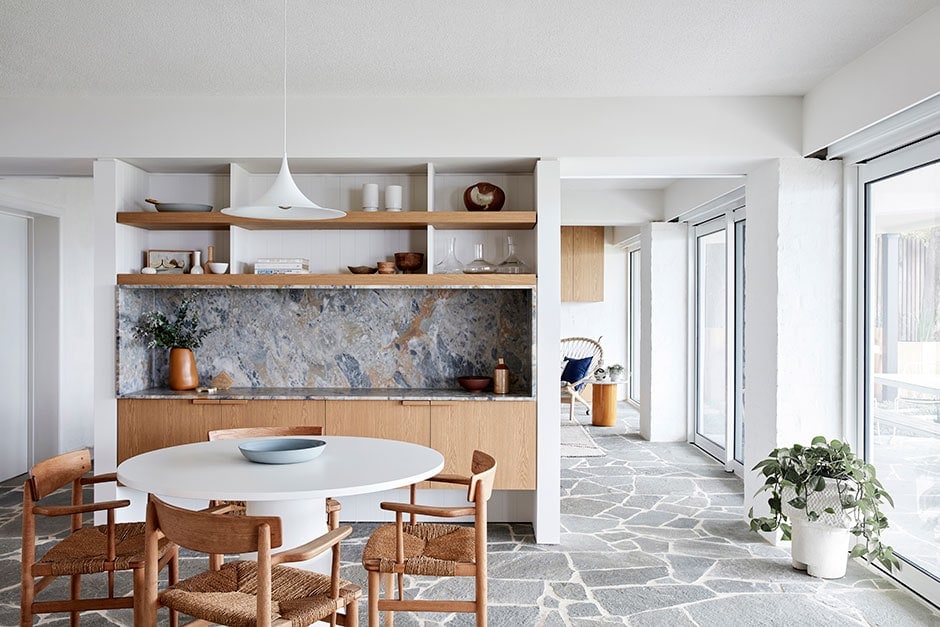 ABOVE Working harmoniously with the crazy paving, the Orazio Gold marble from Cairns Marble & Granite lining the monolithic bar downstairs has a subtle link to the sand along the coastline. Much of the home’s new furniture and lighting was sourced through vintage ateliers, including the 1967 Semi pendant lights by Claus Bonderup and Torsten Thorup for Gubi that hang in the living areas downstairs and up. This Reverse 50 dining table is by Andreu World and the striking floor planter is by Steven John Clark of denHolm.

“We wanted to respect the home’s character, but give it some personality and a more contemporary, relaxed feel — a reflection of the way we like to live,” says one of the homeowners. Charged with turning the tide was Melbourne architectural and interior design practice Studio Esteta, who came on board after co- director Sarah Cosentino was introduced to the couple by a mutual mate. “A close architect friend of mine is also a family friend of theirs,” says Sarah. “He felt our design ethos and appreciation of mid-century design would align nicely — and they did!” 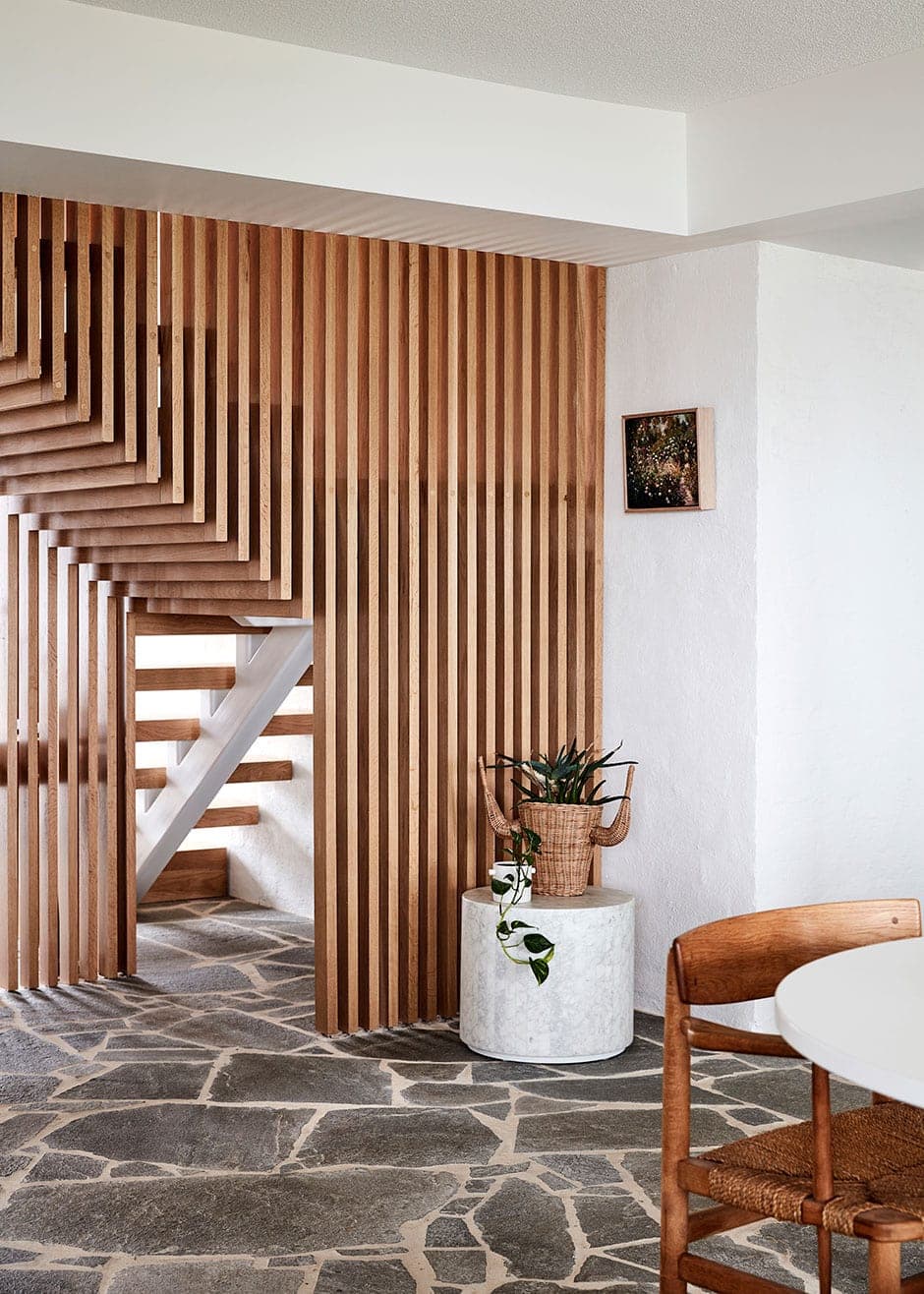 ABOVE Turning what was dead space into the foyer’s defining feature, the American oak timber battens that surround the new stairwell pay tribute to the era and maintain sight lines to the bar and view outside. Hanging above the couple’s characterful vintage straw planter is an artwork by Harris Smith.

With history top of mind — both the home’s and the family’s — Studio Esteta chose to leave the dwelling’s footprint untouched but sensitively modify the spatial arrangement within it to create a chic safe harbour for the pair tailored to their love of playing host. Many of the original details were retained or used as points of reference, such as the glazed mosaic tiles that couldn’t be salvaged but instead inspired the palettes of the home’s five bathrooms. The couple also took inspiration from a favourite painting of the local boatsheds that they’ve had for many years. The artwork by Melbourne artist Sally Joubert is now a highlight in the living area on the first floor. 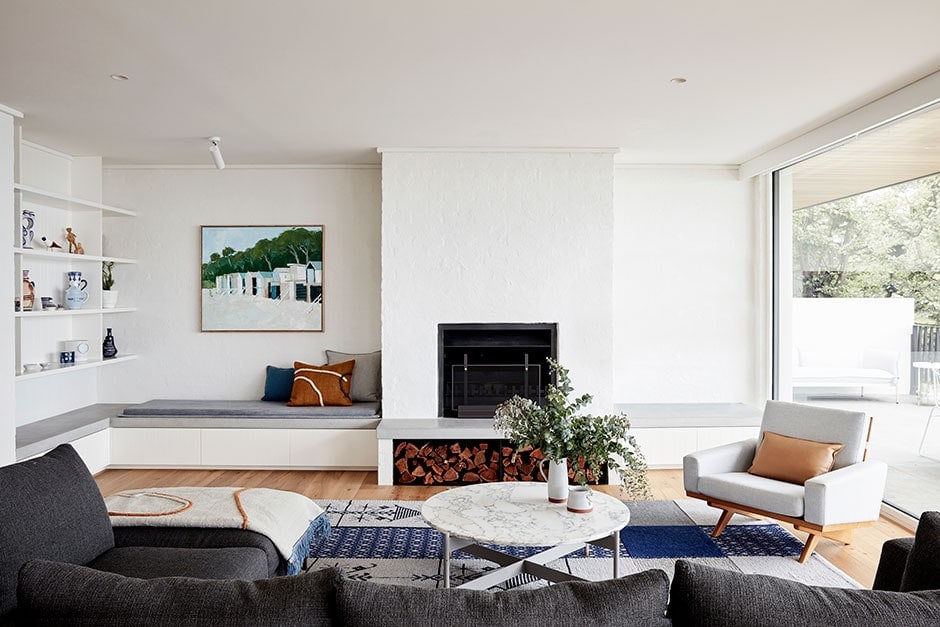 ABOVE The home’s understated character was honoured during the renovation, which employs sympathetic material and colour palettes inspired by this artwork by Sally Joubert in the upstairs living area. Although the renovation hasn’t been completed for long, Sarah says the house already has a strong sense of home, a contributing factor being the array of art and collectables the couple has curated. One of the homeowners says they’ve chosen to keep the décor “simple, comfortable and not too precious. We only ever choose furniture and artwork we love, and somehow they all work together.” Vintage finds include this coffee table and armchair from Angelucci 20th Century.

Their orientation already maximising the view, the existing kitchen, dining and living areas stayed put on the home’s upper level. The ground floor, however, was completely reimagined with the introduction of a timber-framed stairwell; a breakfast nook, bar and second living area; plus a window that provides a new view of the Portsea Pier. Crazy paving in these areas enhances the visual flow between home and garden. 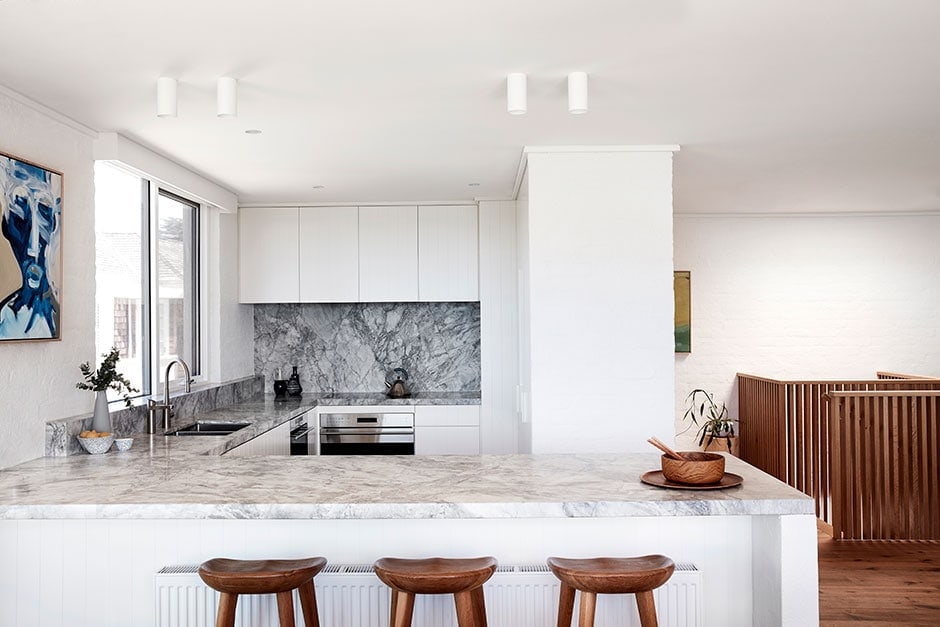 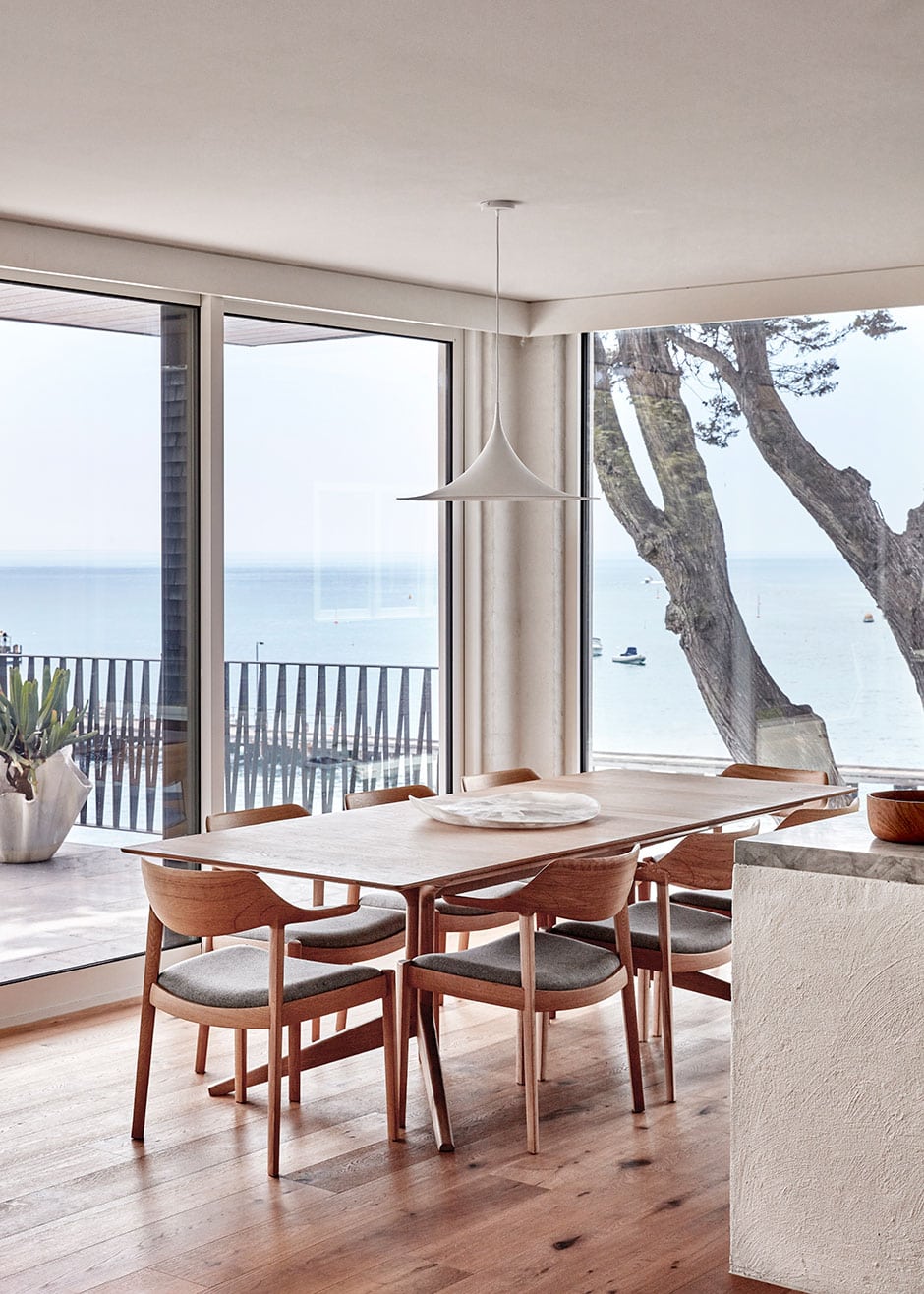 TOP & ABOVE Superwhite Dolomite marble sets a sophisticated tone in the upstairs kitchen (top), a light-filled space that connects to the dining area (above), where Wing Luxe dining chairs by Conde House surround a Light Rectangular table by Matthew Hilston for De La Espada and offer diners a stellar view of the bay.

As well as the architecture, Studio Esteta took on the interior design, and the furniture specification and styling too, imbuing each space with a deep connection to the environment  without resorting to any of the usual coastal clichés. The material palette layers various tactile elements — including bagged and whitewashed walls; warm, welcoming wood; and natural stone accents reminiscent of the glistening coastline — that work together to produce an effect that’s arresting but unfussy. It’s balanced by the sophistication evident in the clean lines and abundant light, and the pale colour palette that forms a calming, neutral backdrop for the couple’s artworks, ceramics and other treasures — and, of course, that view. 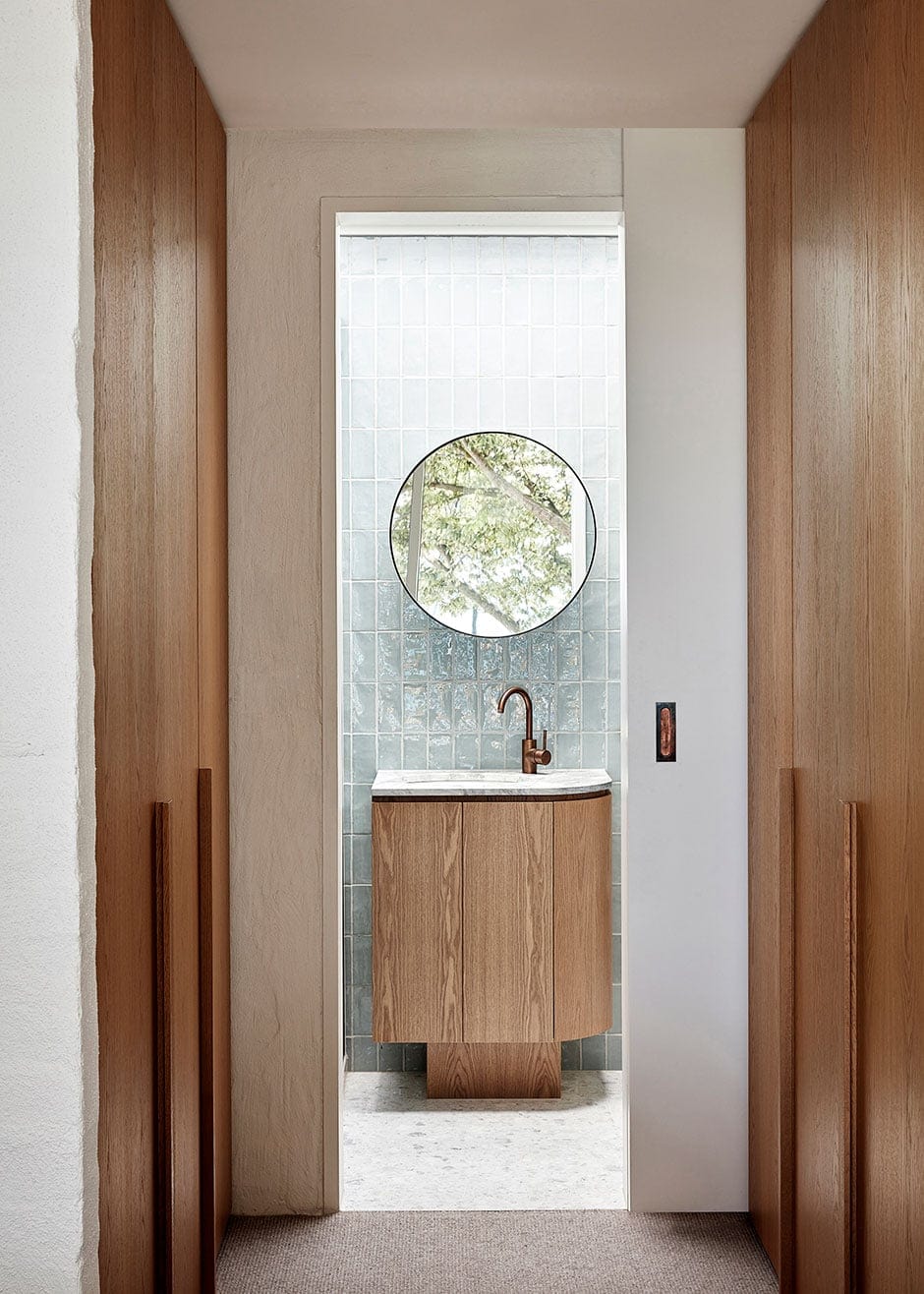 ABOVE The mirror custom-designed by Studio Esteta for the master ensuite reflects the treetops beyond the couple’s bedroom and terrace. The cabinets in European oak veneer are also bespoke and echo the cupboards in the hallway. The vanity in Superwhite Dolomite marble is teamed with tapware from Brodware’s Yakato range that complements the door’s Designer Doorware handle.

With Portsea Beach below the house, the pier within arm’s reach and Port Philip Bay beyond, for this pair, a walk or a swim before breakfast is essential, whatever the season. In the weekends their three adult children, based in Melbourne, often come to stay with their own offspring, and in summer it’s an open house with both family and friends welcome to come and go. 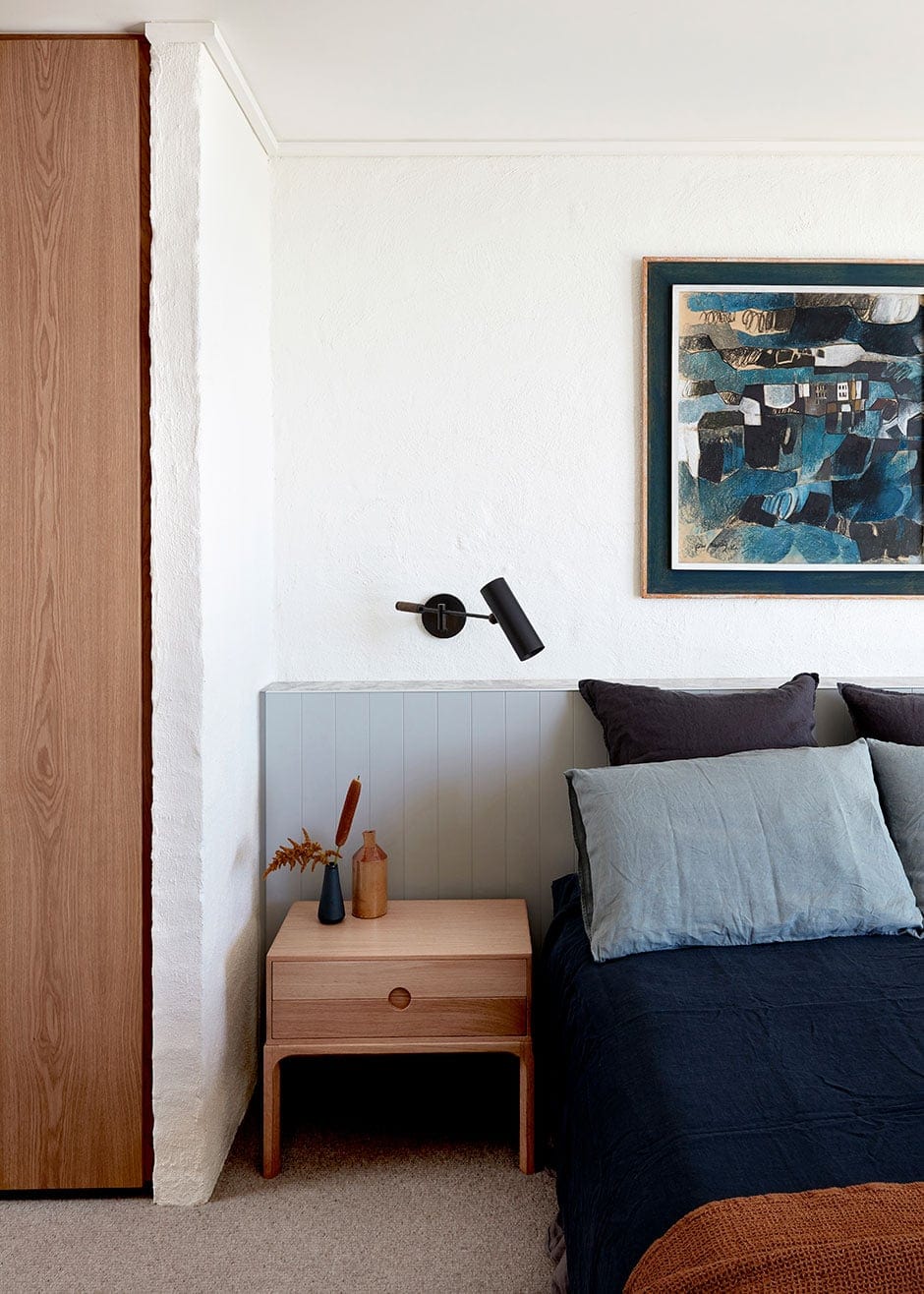 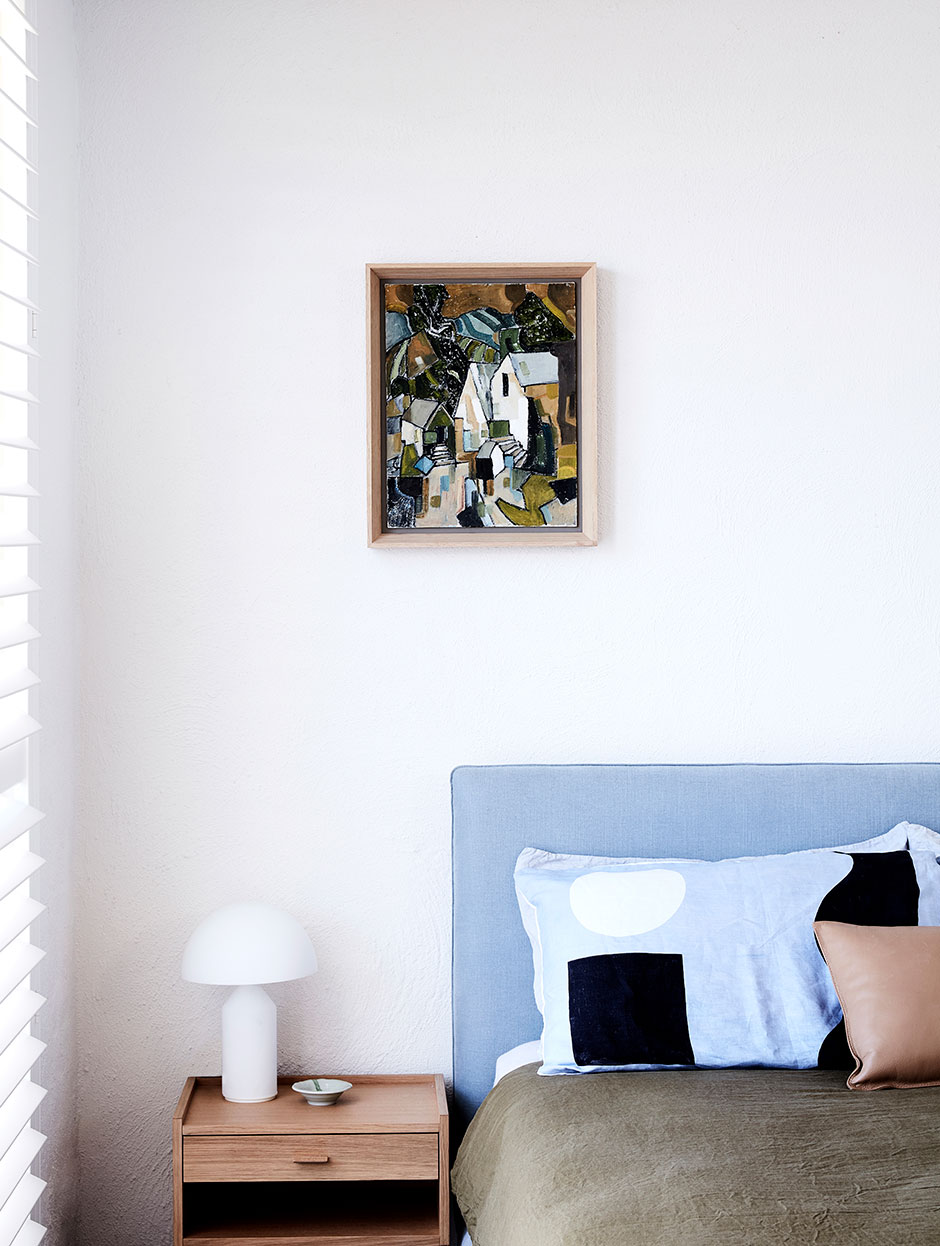 TOP Here, an artwork by Shay Docking is teamed with a Cylinder Swing Arm sconce by Apparatus, a headboard by Studio Esteta, an Entré 1B bedside table by Great Dane and tonal bed linen to tie it all together. ABOVE This guest room features a bedside table by Hans J Wegner, an Atollo table lamp by Oluce and a Nook bed from Jardan.

“It makes for a very relaxed lifestyle only an hour and a half from Melbourne,” says one of the homeowners. “Many of our friends and family members can’t believe the transformation. Others can’t stay away — they love it here as much as we do.” 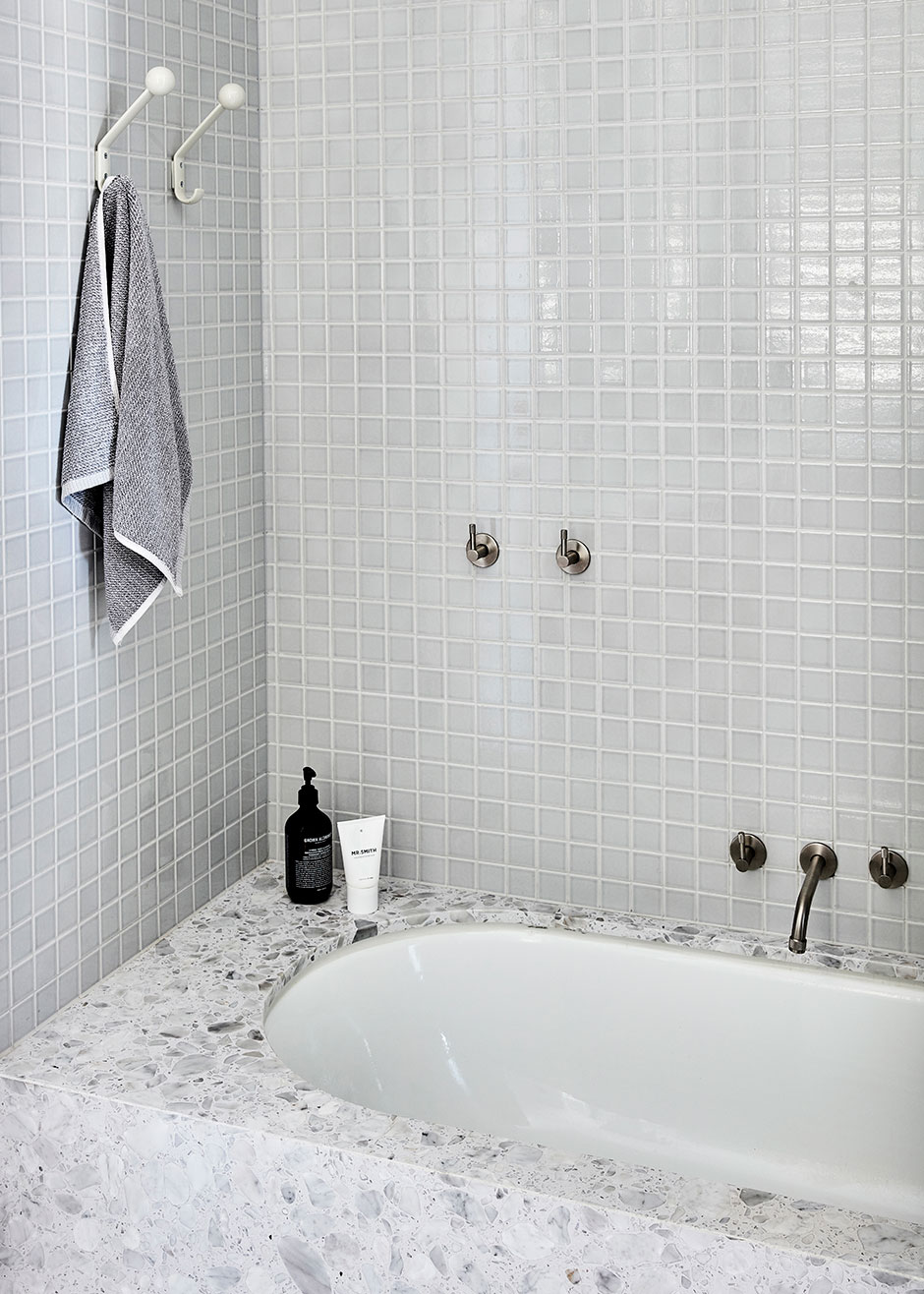 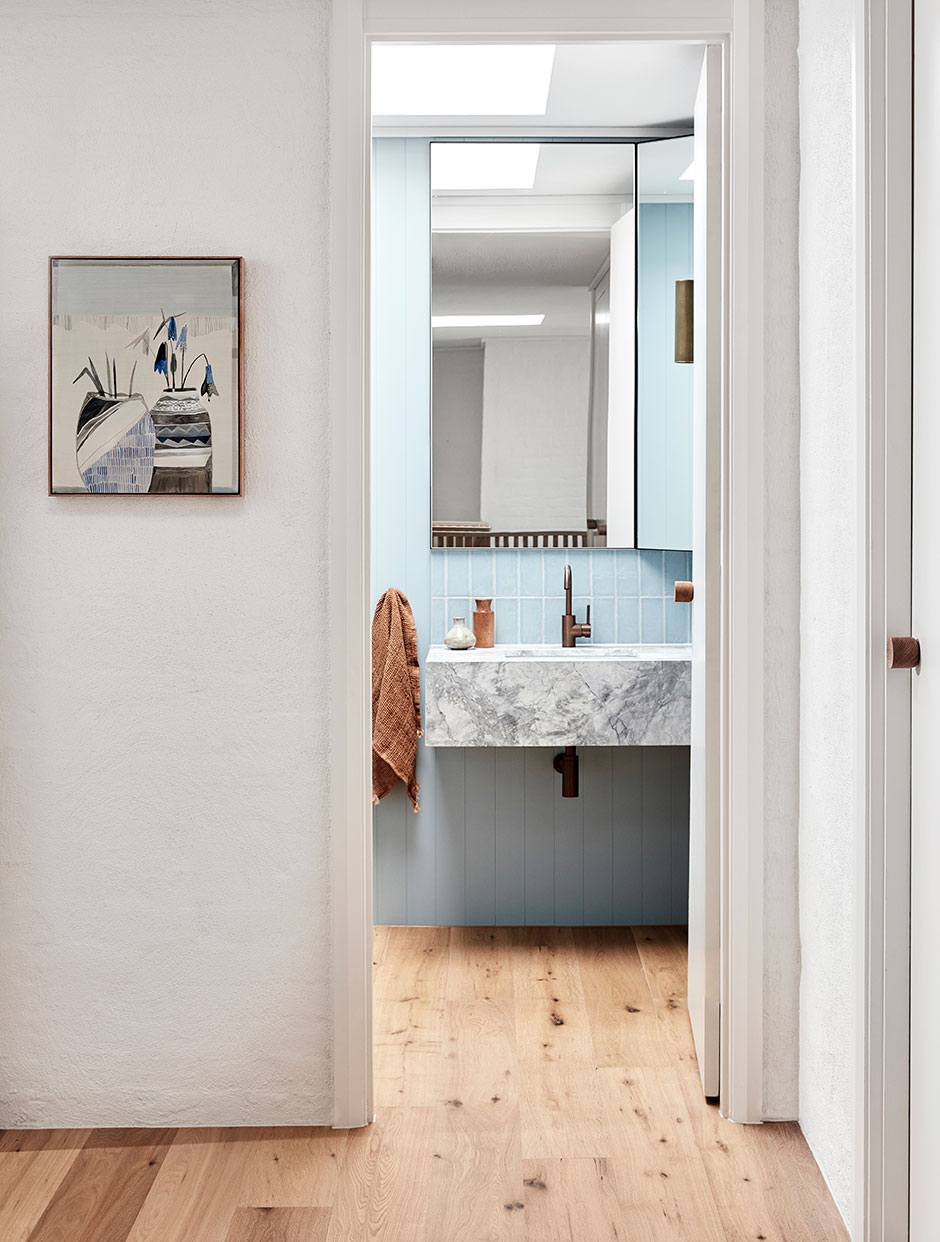 TOP One of two bathrooms on the first floor, in this space the existing bath and hooks are complemented by terrazzo from Signorio and Yakato tapware by Brodware. ABOVE One of painter Emily Ferretti’s early works leads you from the first-floor hallway past a timber door handle by Interia and into the powder-blue powder room, where you’re greeted by a mirrored cabinet designed by Studio Esteta.

“We’ve had a lot of positive feedback from the couple — and their family and our mutual friends,” says Sarah. “That’s a true compliment and a beautiful way to finish such a special project.”

Seen a few new season pieces filtering through you