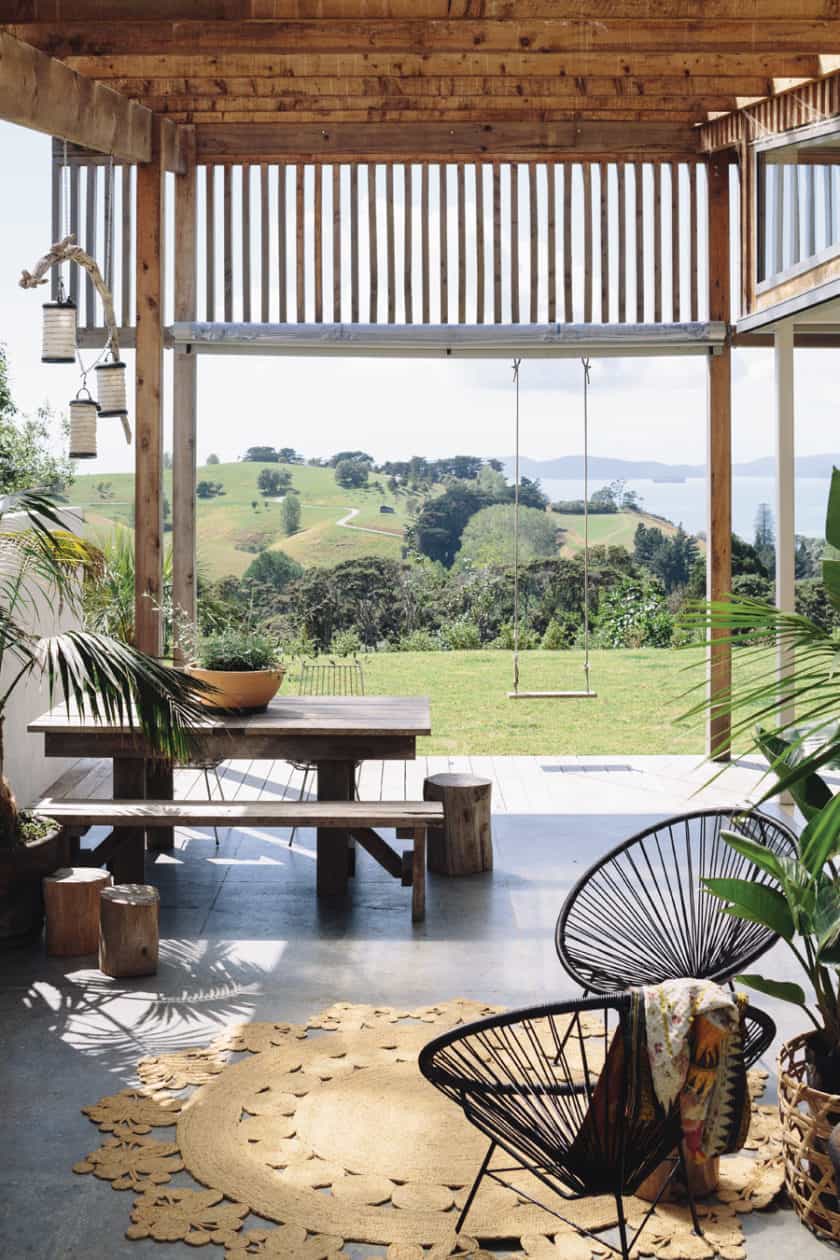 This home is bound by the family that dwells in it – and by the strong relationship between the architect and builder.

Builder Ryan O’Malley met architect Dominic Glamuzina back when they started the same high school. Firm friends ever since, they started working together once each went into complementary professions. Over the proceeding years they have completed six projects together – but it was a very special one that would form their seventh. 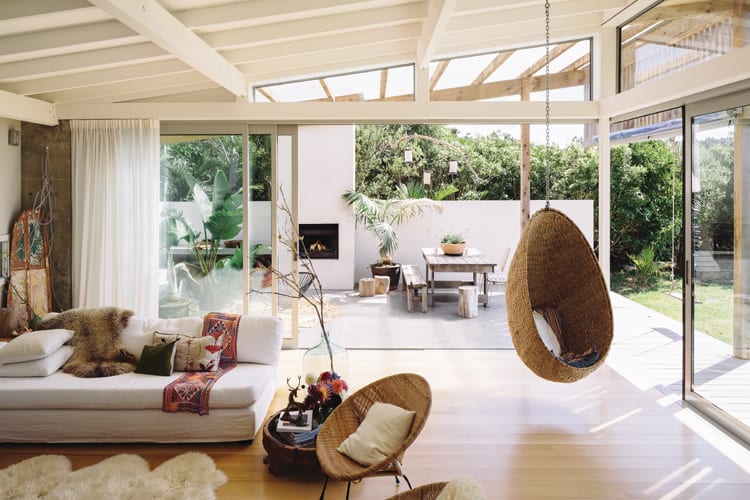 When Ryan and his wife Rachel bought a piece of land overlooking Matakana’s Brick Bay Winery in 2011, they knew Dominic was the right person to design a house to fit it. Unfortunately the architect was just about to leave for an extended work trip to London. “We had one meeting in person, then all the meetings from then on were through daily Skype sessions,” says Rachel. “Either at 6am or 10pm.”But it was via these alternate early starts that the plans quickly took shape. “We had the whole thing nailed in three months,” says Rachel. “It really helped that we all know each other so well and work so well together.” 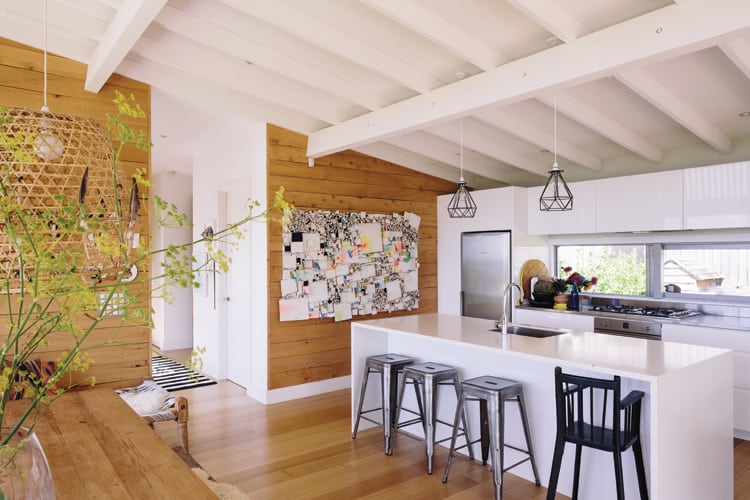 It also helped that the O’Malleys had a clear vision from the outset – and were open to that vision being shaped by their architect. “Our brief to Dom was for a family home that maximised the view,” Rachel says. “Ryan had a lot of good, functional ideas and I had a lot of aesthetic ones for what the spaces would look like inside. But we’re also both of the opinion that when someone is trained in something you should let them do their job. That’s how we got the touch of magic that we wouldn’t have had without Dom’s input.”This touch of magic is what Rachel calls “a rusticated, softened version of Dom’s signature high-end look”. She says: “We wanted a very relaxed feel to the place that suits its location near the beach.” 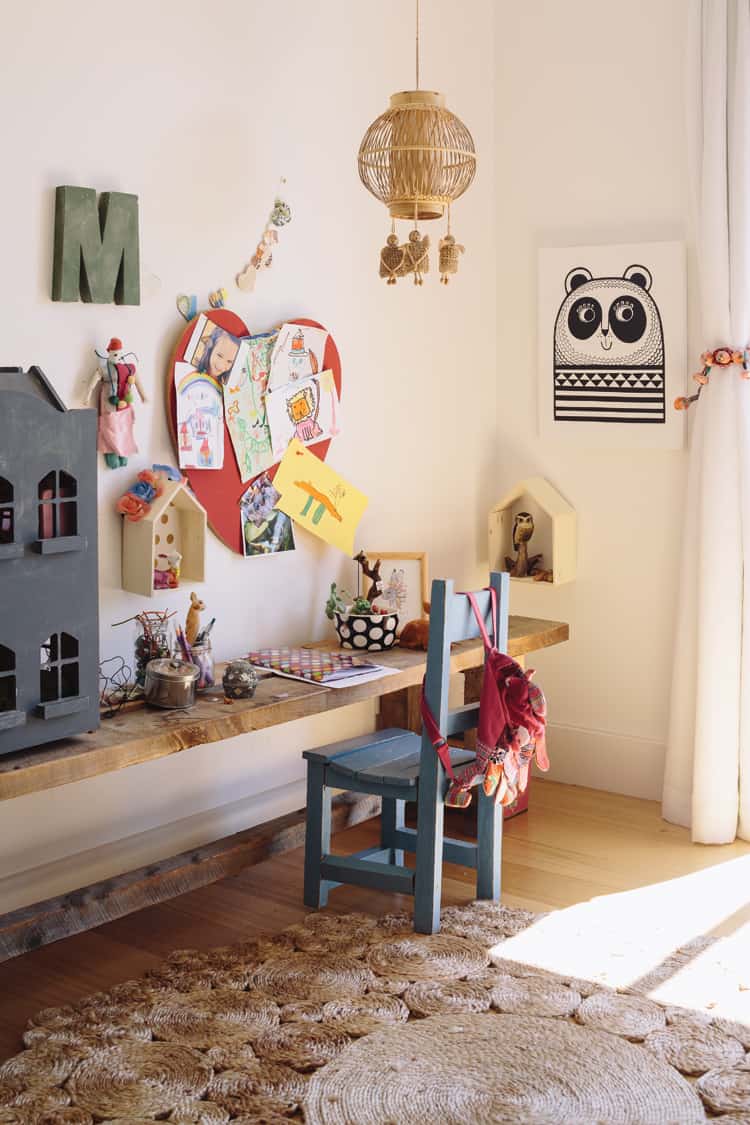 And this is exactly what they achieved – over a 10-month build with Ryan and an employee working on the project fulltime and friends and family being called in to help from time to time. Ryan and Rachel’s three children Noah (10), Ari (8) and Matai (6) also lent a hand where they could.Although Dominic was still overseas, he also played an active part in the construction process. “There were lots more Skype meetings discussing all the decisions along the way,” says Rachel. “And it all went pretty smoothly because of them.”In fact, there were minimal diversions from the original plans – the only big one being the only major thing that the O’Malleys and Dominic had differed on from the start. “We put in a wall in the lounge then changed it to windows after realising the view was too insane to cover up – just as Dom had said.” 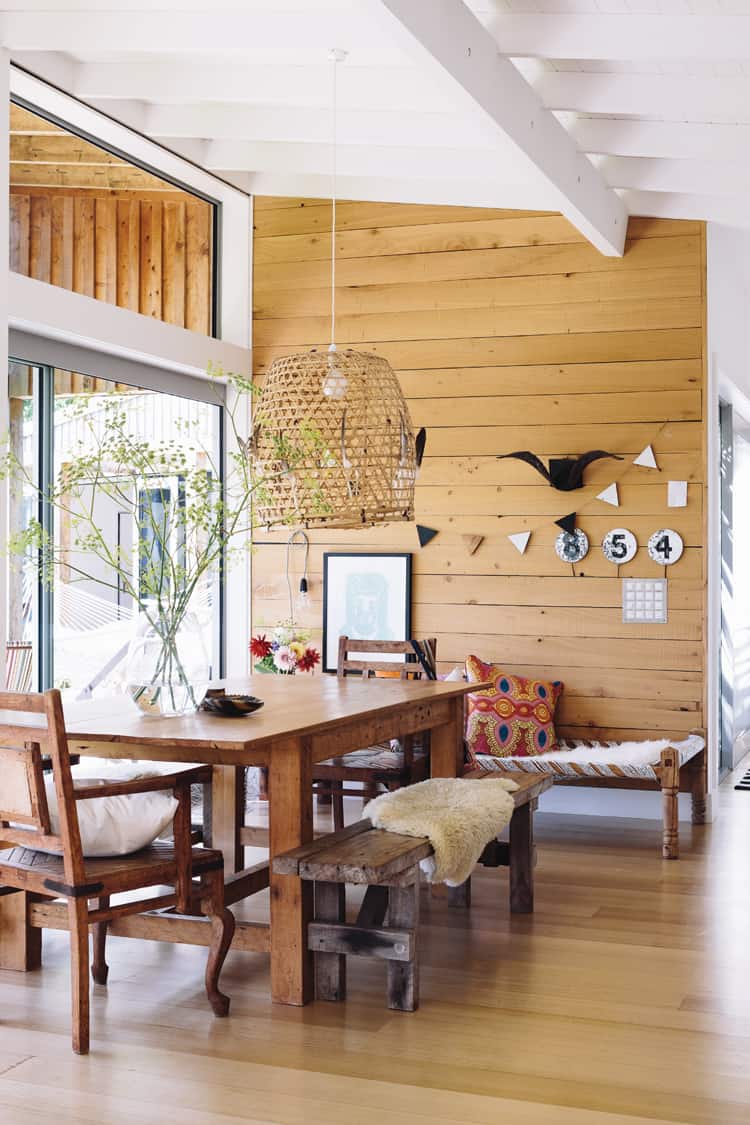 Four years on that insane view can be seen from every room in a house that appears, from the outside, to meld into it. The exterior is made from roughly sawn macrocapa, which has weathered to a soft grey which fits beautifully into the surrounding landscape. And from the inside, Rachel says, “It feels like you’re living outside when you’re inside because of all the windows and the way the house has been positioned.”This positioning makes the home seem deceptively small from the outside – until you see the outdoor living area running the entire width of the building at the far end. This space is Ryan’s favourite: “I love lazing in the hammock in the covered area next to the outdoor fireplace,” he says. 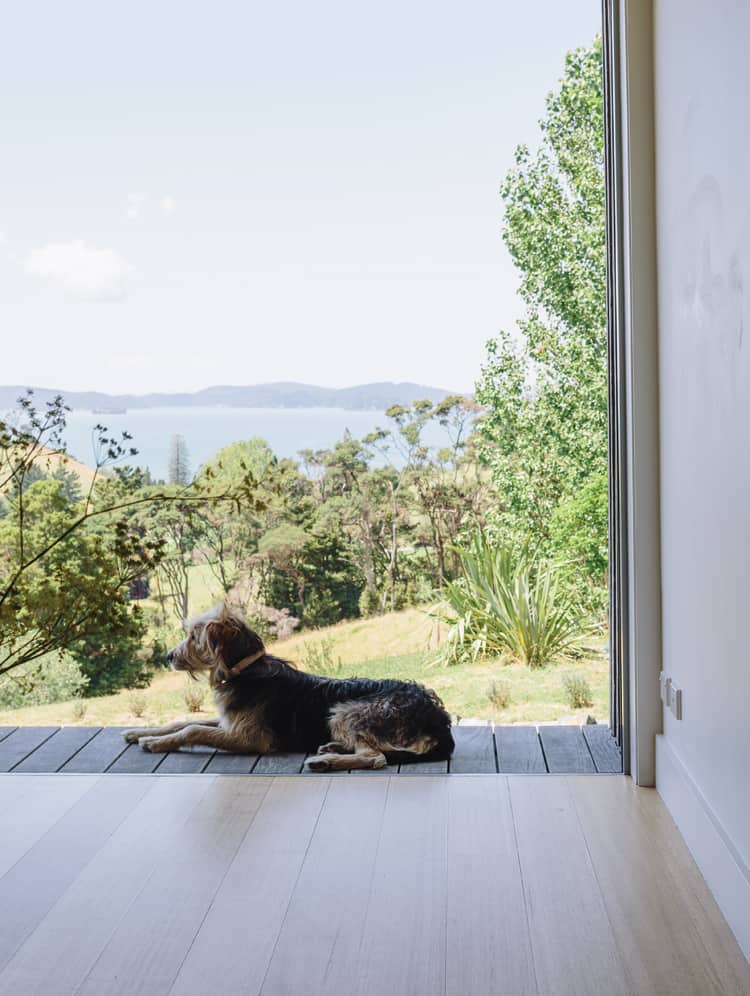 Rachel’s favourite space is the kitchen, dining and living area which all flow into each other. “It’s great to have everyone hanging out chatting and really feeling a part of things,” she says. “It’s also amazing to always be able to enjoy an incredible view – even while we’re doing mundane things like making dinner.”Making meals is made even more enjoyable by the kitchen layout and design. Working benchspace has been hidden behind oversized cupboard doors, with big drawers in the main part of the kitchen housing any other clutter. “This leaves nothing to look at but clean lines,” Rachel says. 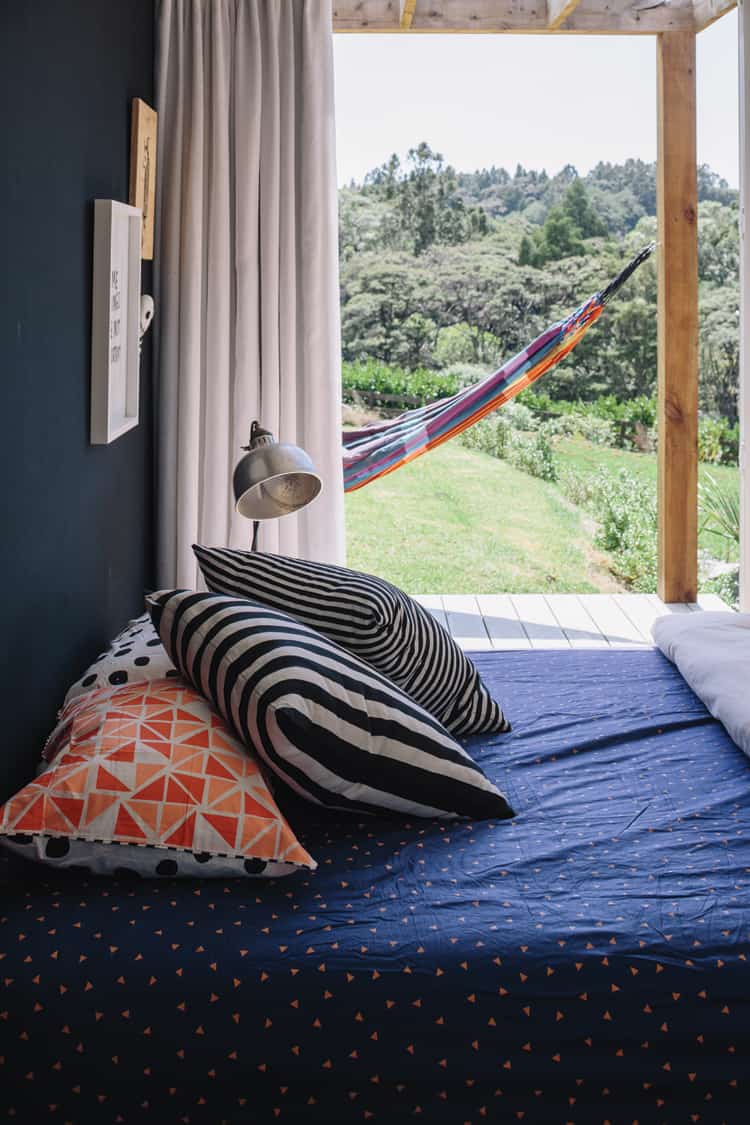 There are more special architectural details to be found down the hall in Ryan and Rachel’s bedroom. A simple, cantilevered room with a macrocarpa-clad feature wall at one end and a floor-to-ceiling sliding glass door at the other, the only elements to distract from the views over Brick Bay Sculpture Park and Kawau Bay are their bed and bedside tables. This was achieved by tucking a dressing room and bathroom behind a walk-through wardrobe. “Laying in bed, you feel like you’re floating out over the land and out to sea,” Rachel says. 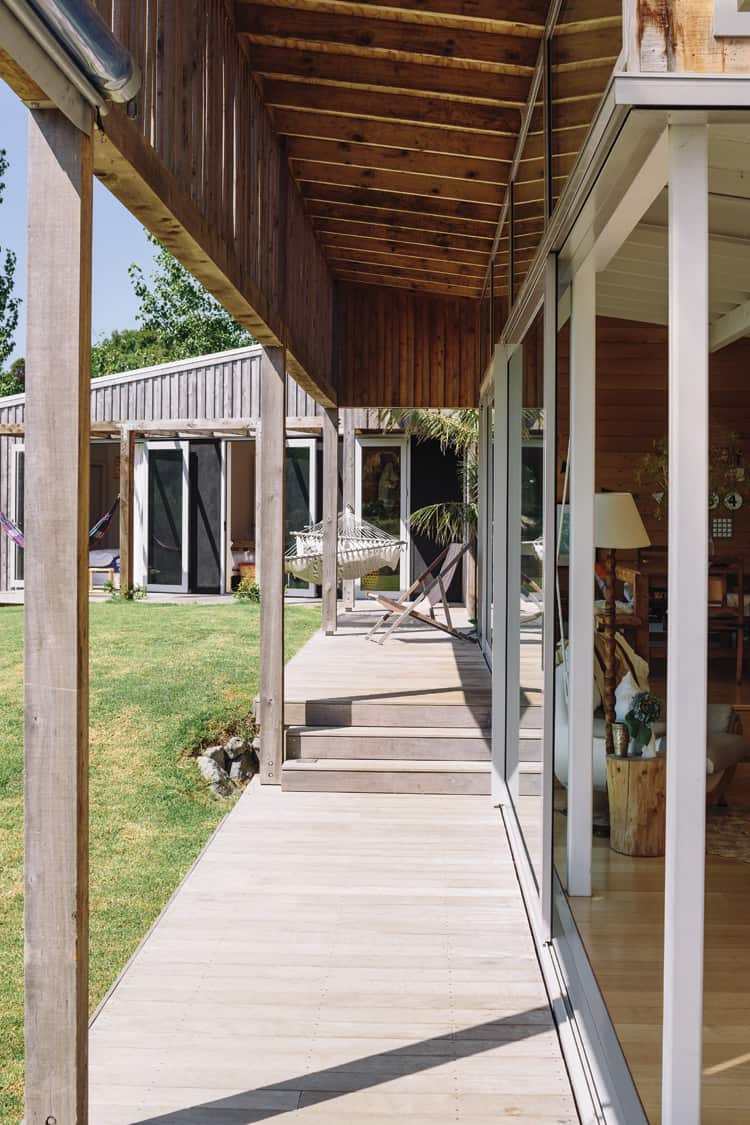 Rachel, Ryan and Dominic are all feeling pretty floaty with the results. In fact, the collaboration was so successful the trio have worked together again on Rachel and Ryan’s boutique homes company, Little Tree Homes – a unique collaboration showcasing their combined talents in a small, sustainable building company. “We all saw there was a need for sustainable, architecturally designed homes that are financially achievable,” Rachel says.In between these endeavours there are less lofty pursuits to be enjoyed. “We all love visiting the winery that our property backs onto,” Rachel says. Hey, perks of the job – and of buying land in the right location. 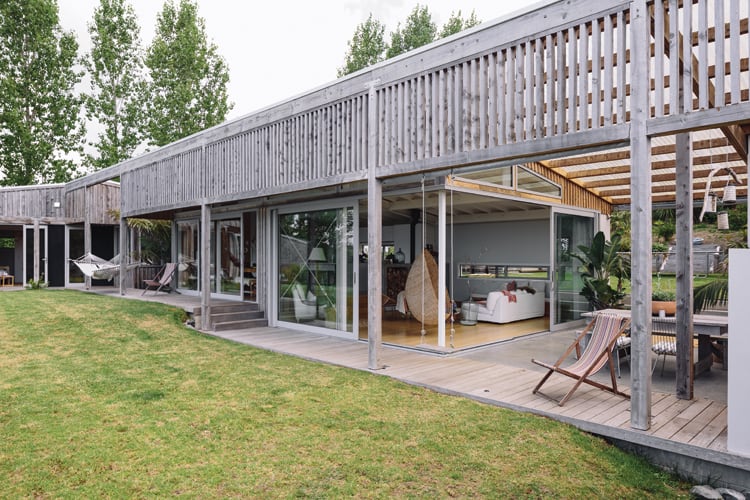