The Devon Made glass fruit series had us at ‘banana’ 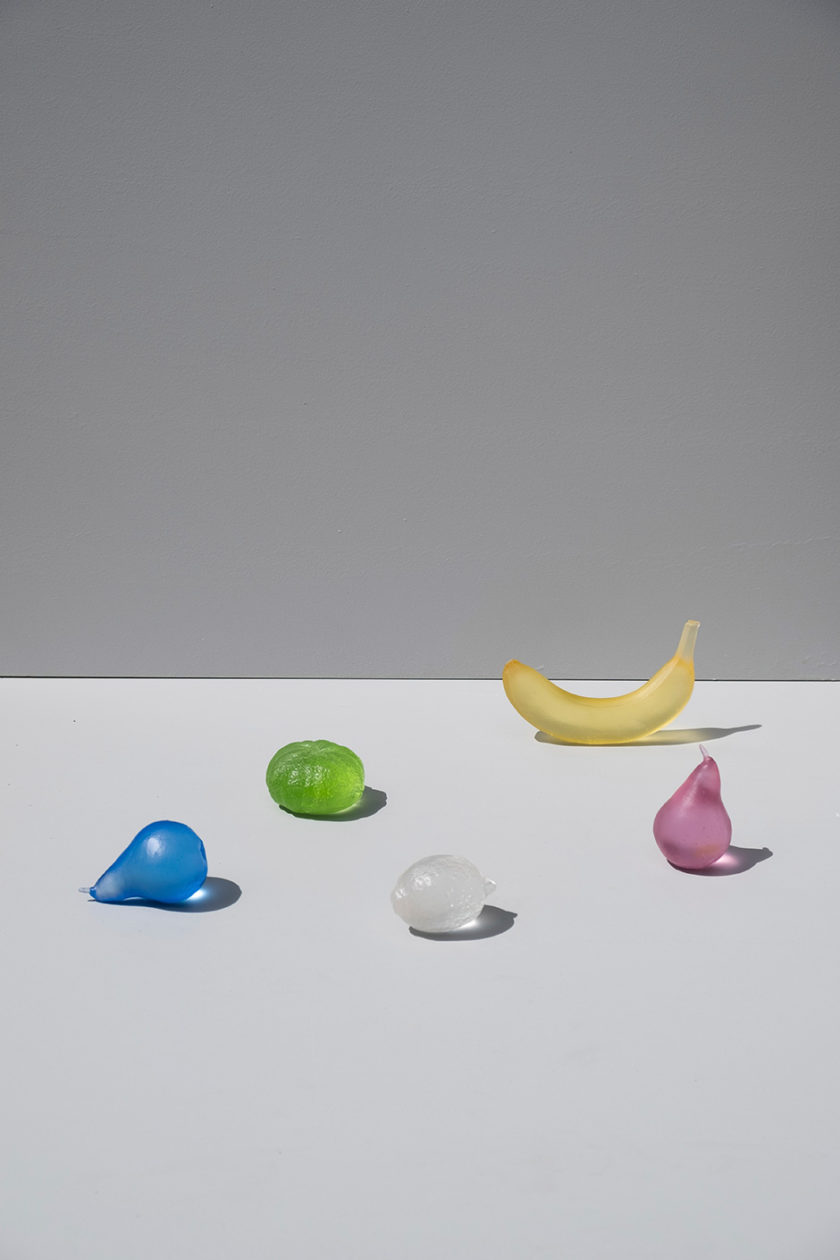 Captivating the eye and demanding to be touched, Devyn Ormsby’s juicy objects introduce her as one to watch.

Devyn Ormsby has been drawn to art all her life. Four years after graduating from Auckland’s Elam School of Fine Arts, she says she feels very fortunate to be able to work in a creative field — but she’s so talented we think she had it coming. 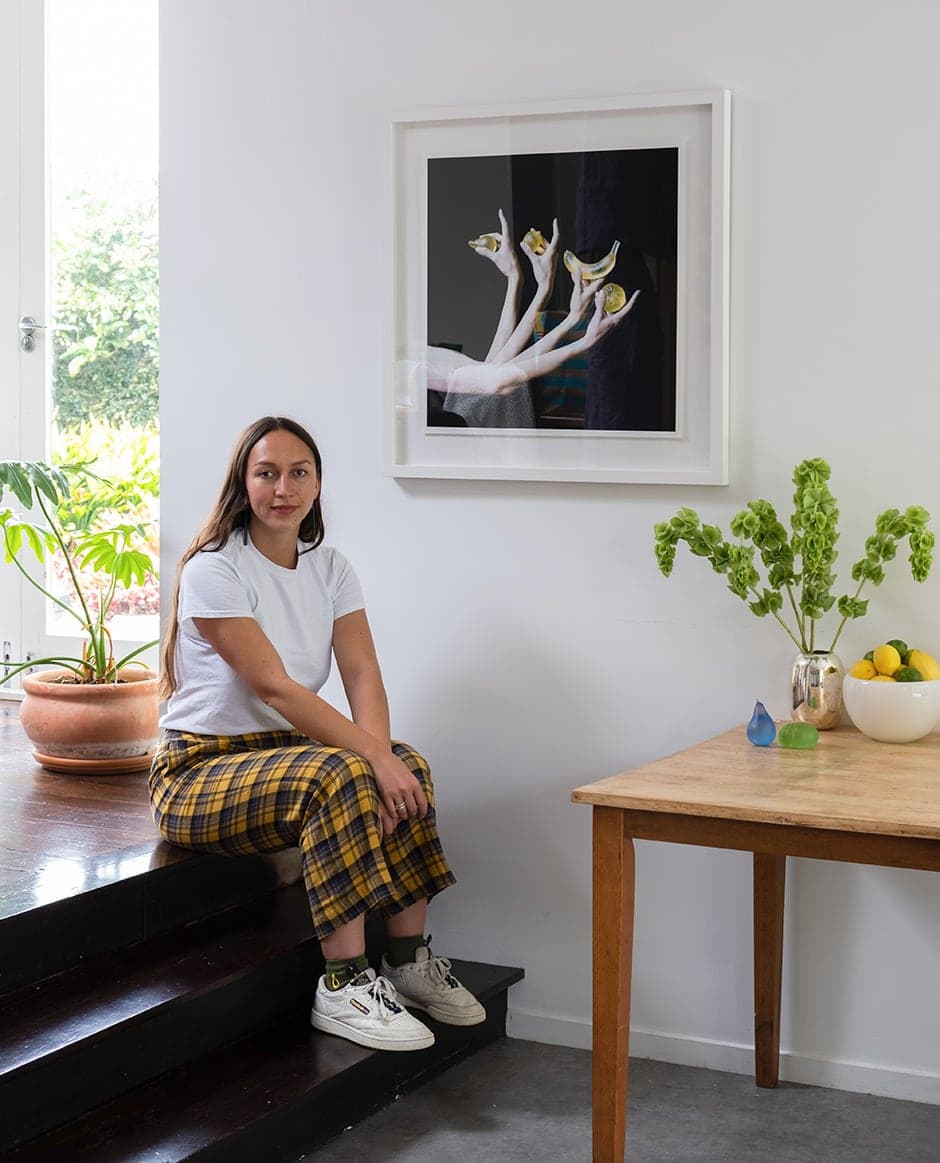 ABOVE Devyn says she’s inspired by “spontaneity, being open to mistakes or failures, not taking things too seriously, reading, travelling, architecture, photography, trying new food, going for walks, having a balance of art practice and life. I’m also really interested in how things are made — the production side of making. I like the process more than the outcome.”

So, Devyn, what led to your exploration of glass as a medium? I’ve been working with glass for two years now. I made my first glass mandarin in December 2018 and gave it to my boyfriend’s mum for Christmas. After that, I began working on the rest of the fruit, which I launched in June last year.

I learned the casting process through my job at Lukeke Design. We primarily make glass birds that are sold in galleries locally and internationally. Everyone who works there has their own glass projects on the side, which encouraged me to experiment with my own. 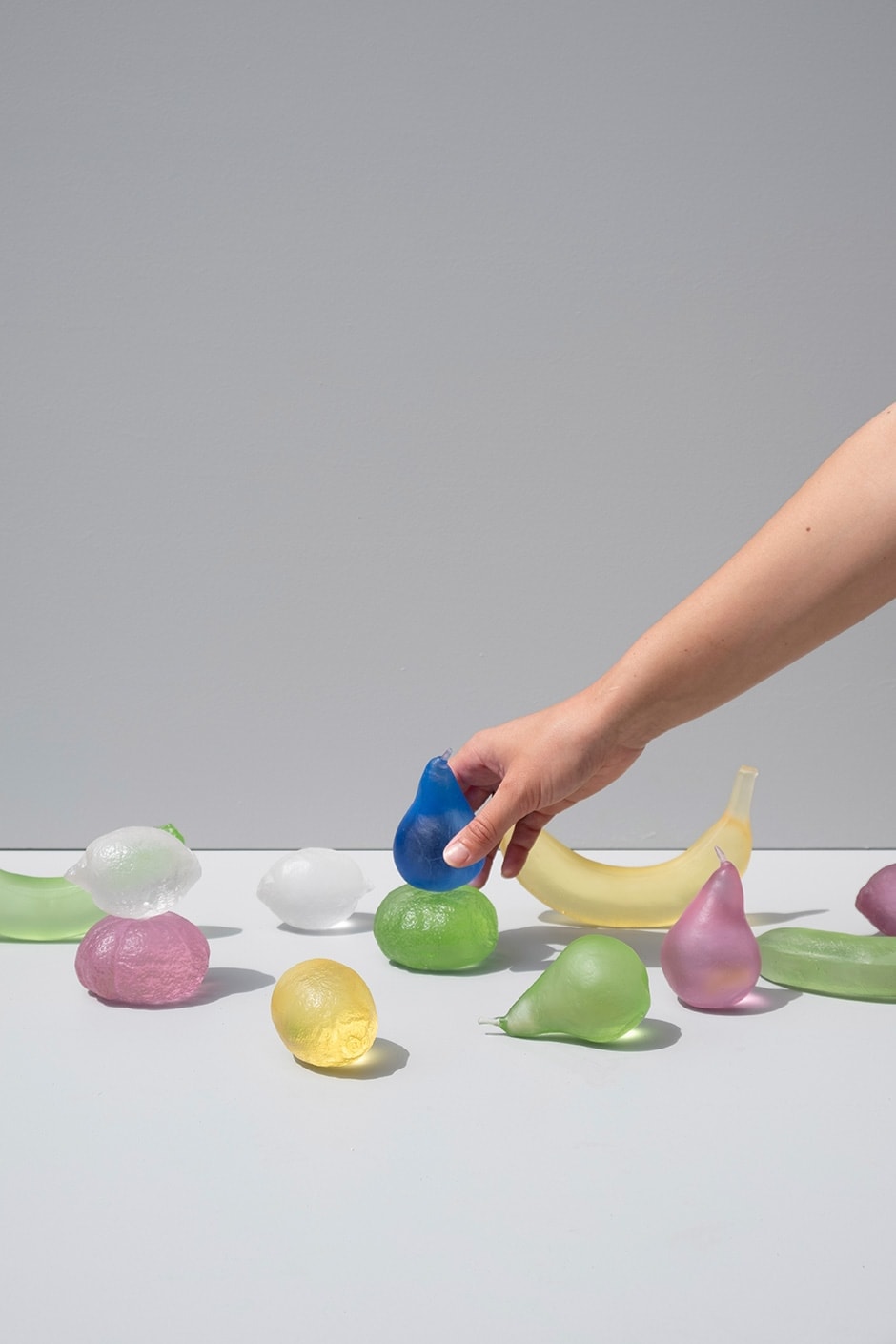 We love the concept of fruit as art object — how did this come about? Fruit holds a large significance in art history, which is where I think the appeal comes from. I’d thought for a while about what I wanted to make and kept seeing vintage glass fruit in op shops. Brightly coloured with exaggerated forms, it was charming in its own outdated kind of way; I wondered where it came from, what its purpose was and who used to own it. Eventually I set about making a cast-glass version true to the form of actual fruit. 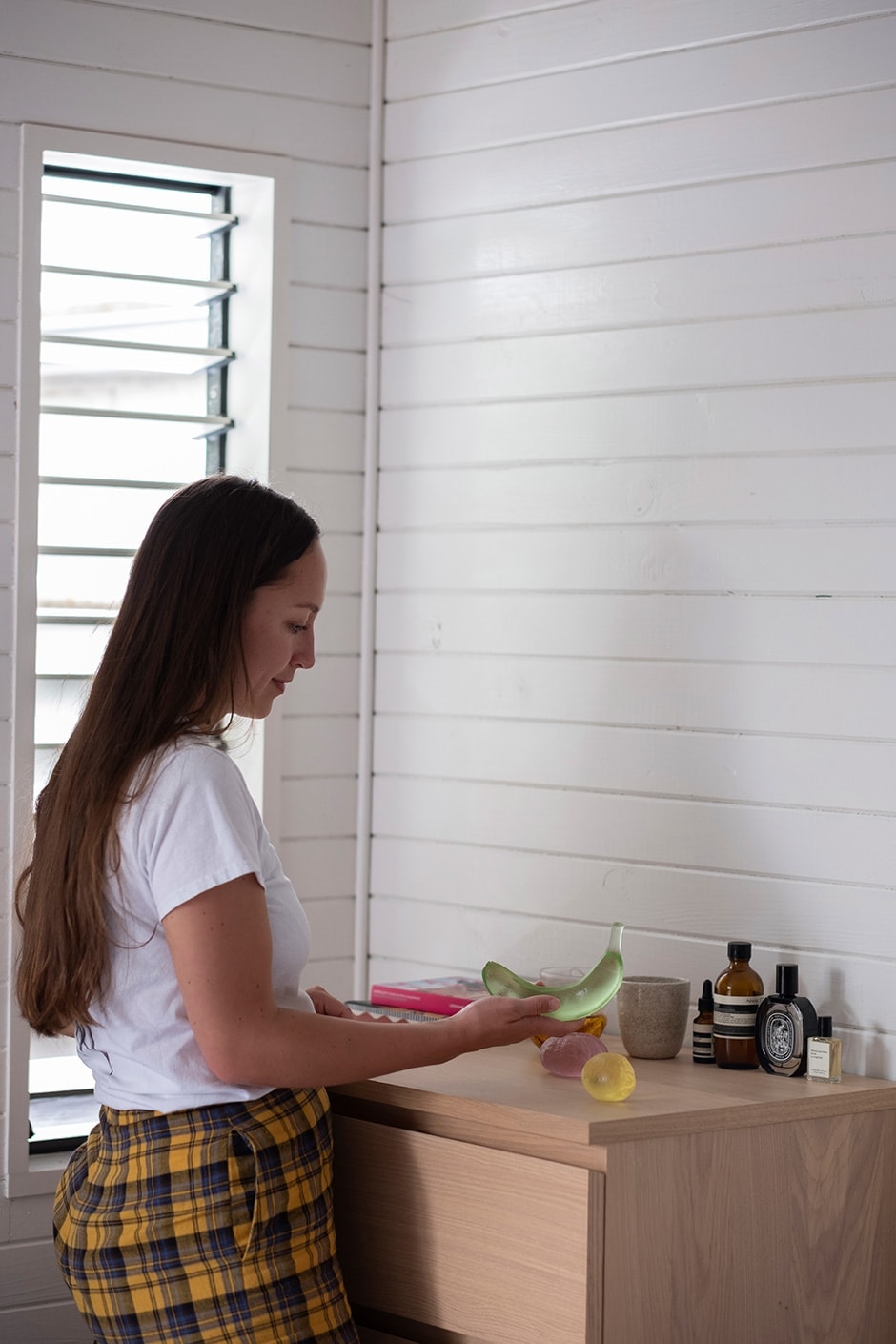 We hear it’s gained international interest… Yes, which is still so surprising to me! I had my Instagram ‘idols’ get in touch with me, which I was starstruck by and has already made the whole venture worthwhile.

What’s your process for making each piece? After spending a long time in the supermarket thinking about what fruit would work well, looking at so many bananas, pears, lemons and mandarins, I cast the fruit in silicone rubber and made plaster moulds around that. When these silicone plaster moulds are set, you remove the initial piece you’re casting and replace it with wax. You can then make replicas with the wax.
To make the glass pieces, I use a lost-wax casting technique, fettling each wax model, filling holes and removing any imperfections from the cast. Next, I make another mould of plaster and silica around the wax, then steam out the wax. I’m left with a positive copy of the original wax model, which is dried and placed in the kiln, where a pot of solid glass sits above the opening of the mould. The glass melts into the mould, then slowly cools down over a couple of days. I then remove the glass-filled moulds and cut through the built-up layers to reveal the cast piece. The next stages involve cold-working, polishing and belt-sanding each object, then signing them and cleaning them up.

What informs the hues you use? I was set on having a limited colour range and wanted to use colours you wouldn’t expect of fruit. I also wanted the colours to be both striking individually and complementary when mixed. I find some colours hold or reflect light better than others, so I chose them with this in mind too. 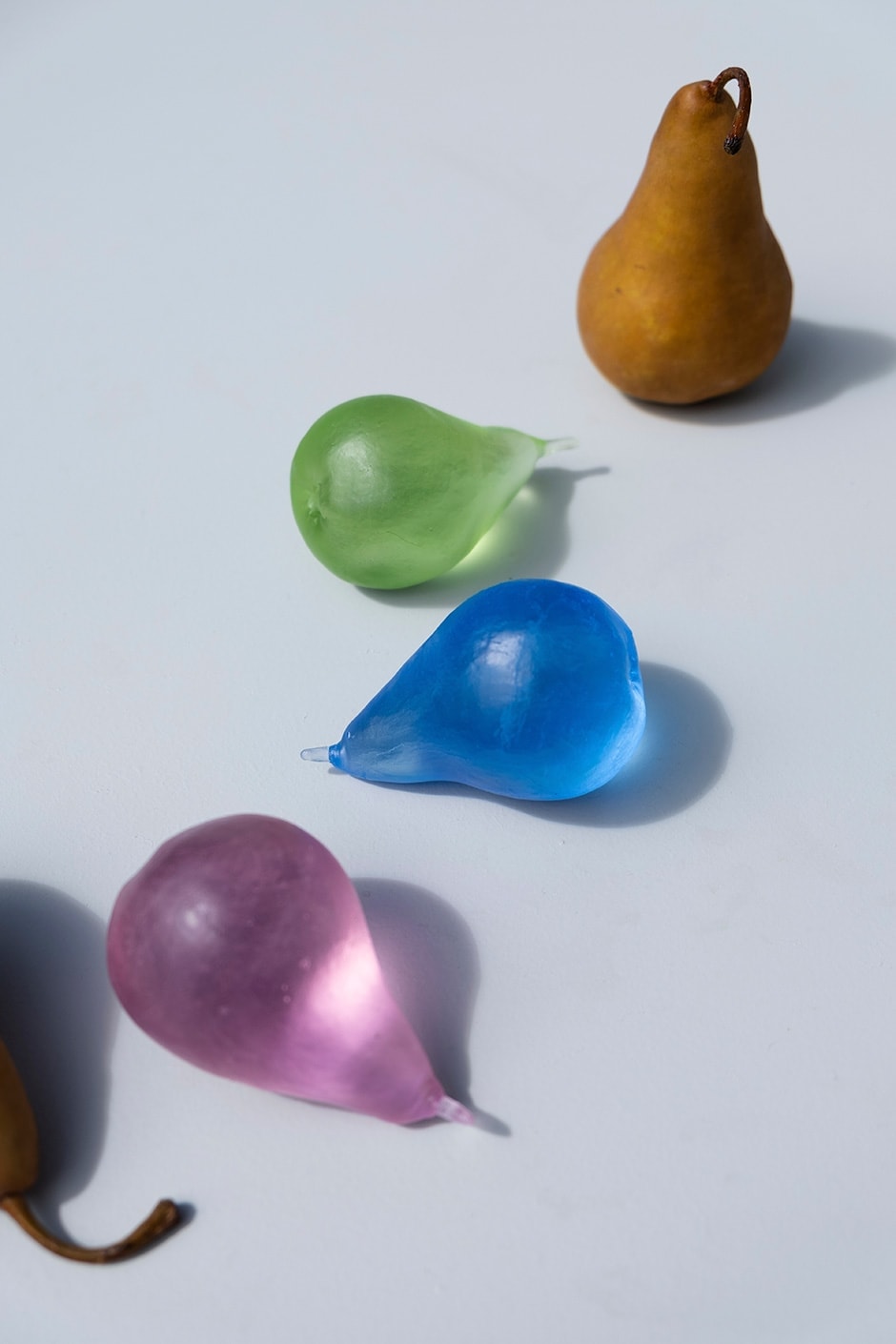 READY, STEADY… When asked what day-to-day rituals she undertakes to get in the mood for her studio practice, Devyn says, “Most days start with a morning wake-up snuggle from my cat Fern — and my boyfriend, I guess! — and a coffee; I’m loving a long black with cream at the moment. They’re my most consistent and key morning starters.”

Where do you create? I’d been making my fruit at work in Avondale in West Auckland but I recently got a kiln and set it up in my own studio nearby.
It isn’t much at the moment; it’s a dungeon-like space beneath my friend’s furniture company, Arkade, that’s functional but also a work in progress. I plan to get it set up nicely, though, so people want to visit and hang out.

Is there anything on the cards that you’re particularly excited about for 2020? I’ve applied for a residency, so fingers crossed! I’m also planning to make another glass series. It probably won’t be fruit-related and I want to try incorporating a new material. I’m not in love with glass but I find it so intriguing and am really enjoying working with it.
devonmadeglass.com