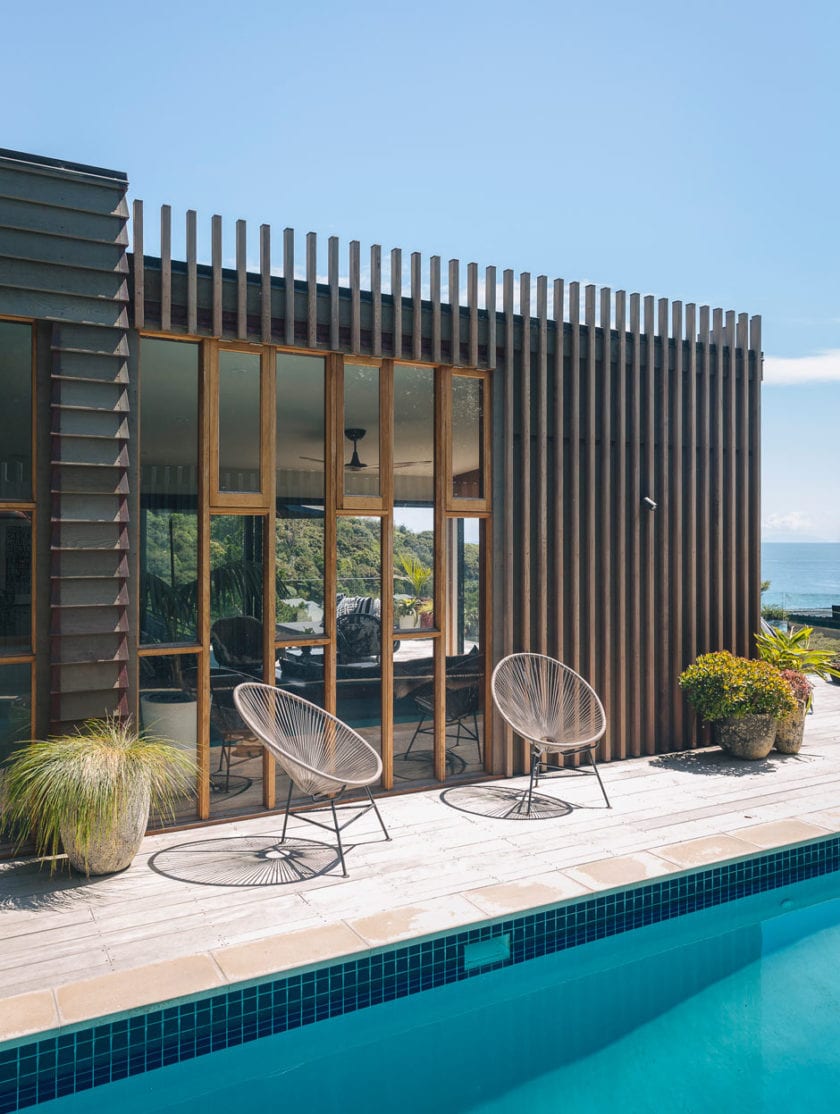 Every day’s a getaway for this family, who’ve created their own epic island retreat.

When Virginia Numans and Ben Hickey go on holiday, all they want to do is come home. You would too, if your house was designed for resort living 24/7/365.
The couple moved to Waiheke Island from Auckland 14 years ago, wanting a stronger sense of community and their sons Harry and Tom to have more freedom to roam. With the ferry commute to work in the city no big deal, they’d found their happy place, and set about carving out a life for their family while renovating houses on the side. 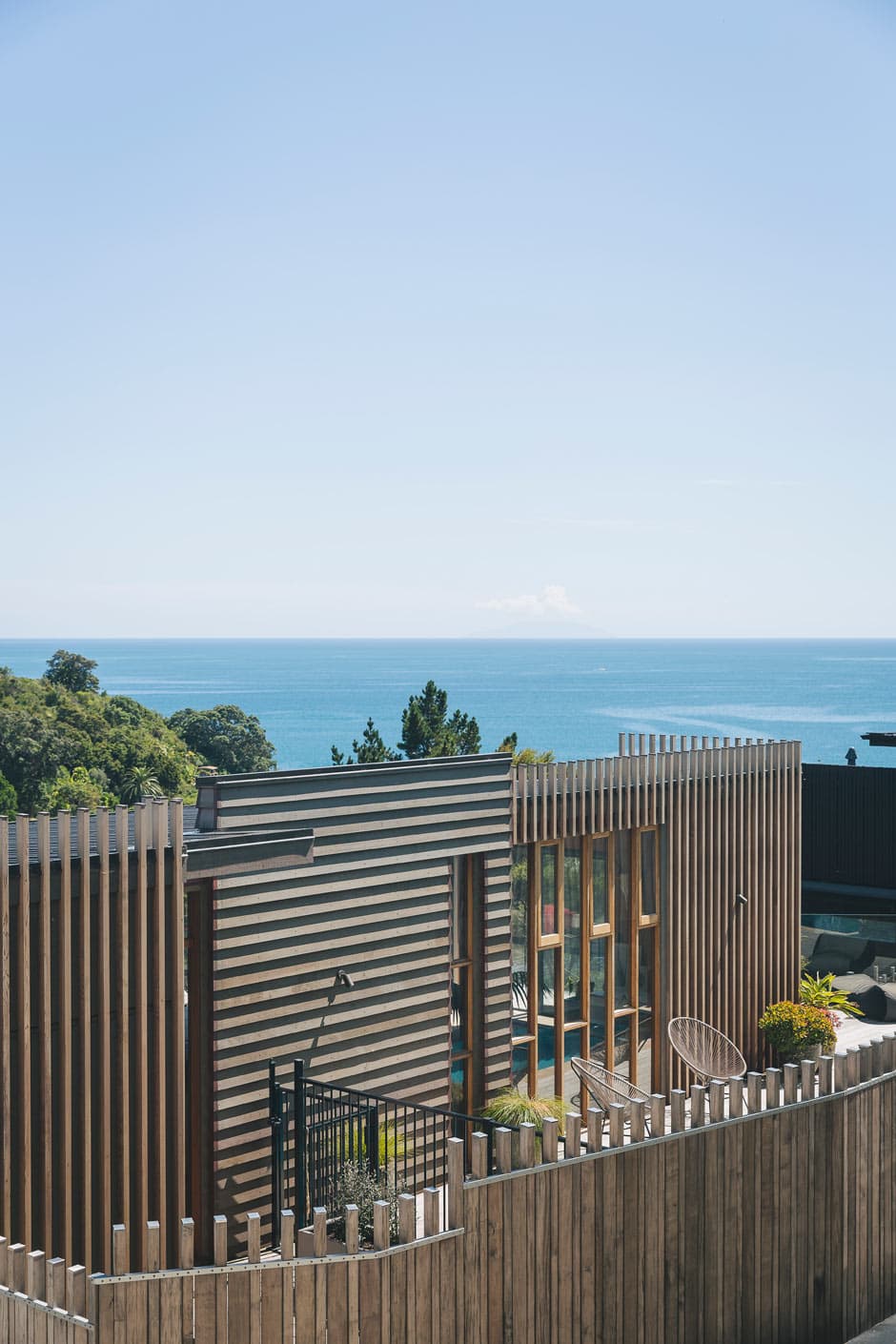 ABOVE The site is so steep that the four-bedroom house had to be pushed up against the right of way. “It’s always a challenge when you arrive at the back of a house on a driveway,” says architect Paul Macintosh. For this reason, the design of the rata fence was primarily about maximising privacy, but it also had to look good from both sides, act as a pool fence and interact with the house. Meanwhile, the mono-pitch form of the roof was determined by the couple’s tight budget. Not the biggest fan of this roofline, Paul says, “to disguise it, we palisaded the house a bit — we took the vertical cedar cladding up past the roofline and also created a strong horizontal visual line that’s reinforced by the pool fence. When you see them together, it looks almost pā-like.”

When a big plot of land came up for sale in Palm Beach, the entrepreneurial couple ignored the rumours it was a lemon, and instead joined with a friend to purchase and subdivide it. “It was all down to Ben’s foresight and vision,” says Virginia. “No one else wanted it because all they saw were the difficulties with the steep land, whereas Ben, ever the optimist, didn’t.”Tapping into their new community, the pair hired architect Paul Macintosh of Macintosh Harris (a personal friend) and builder Tony Page (the kids’ former rugby coach). They intended to build then sell — until they saw Paul’s plans. “Paul’s concept pictures are all done as beautiful coloured sketches and the house  was quite a sight to behold,” says Virginia. “The timber batten detailing and wooden windows really grabbed me and I fell in love.” 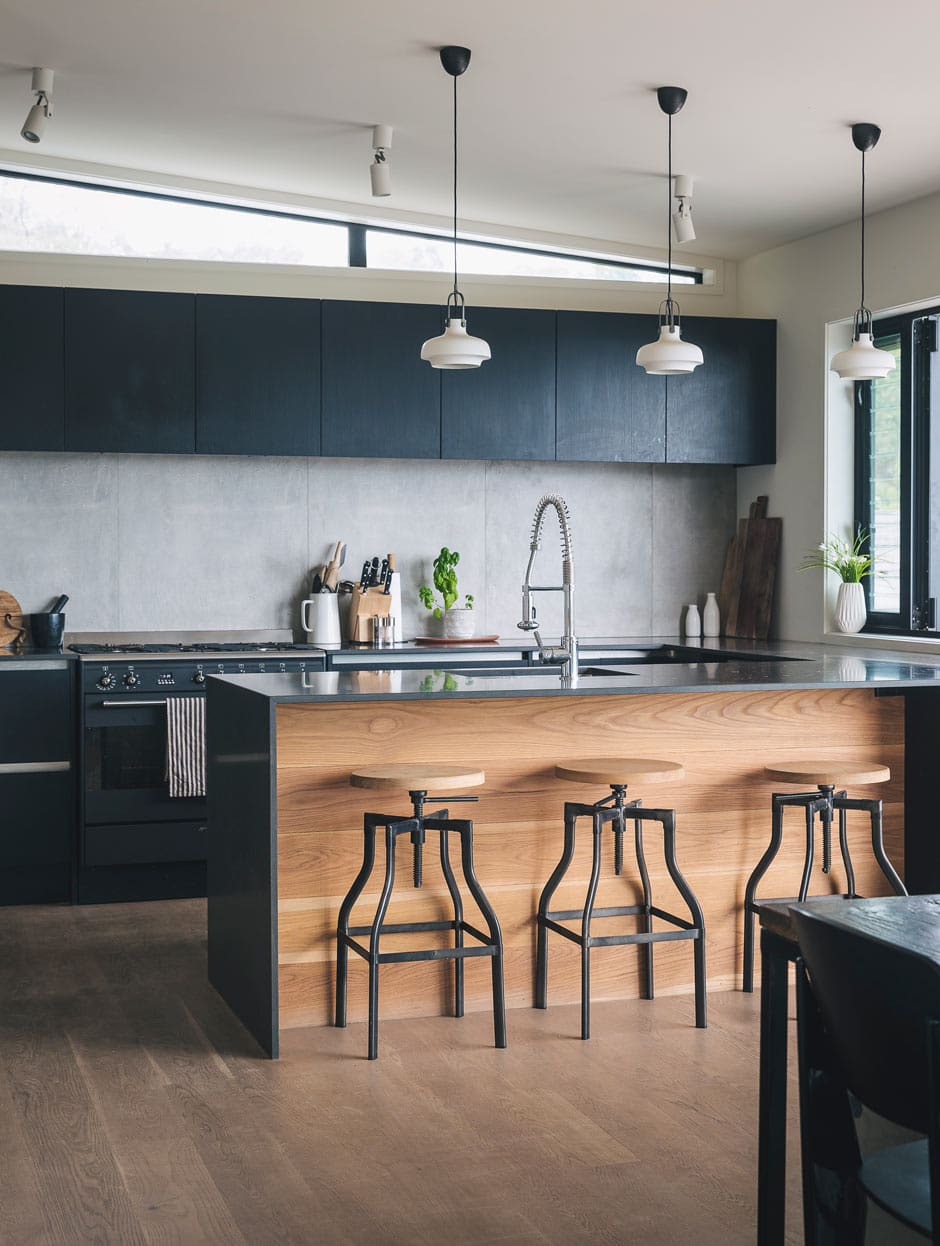 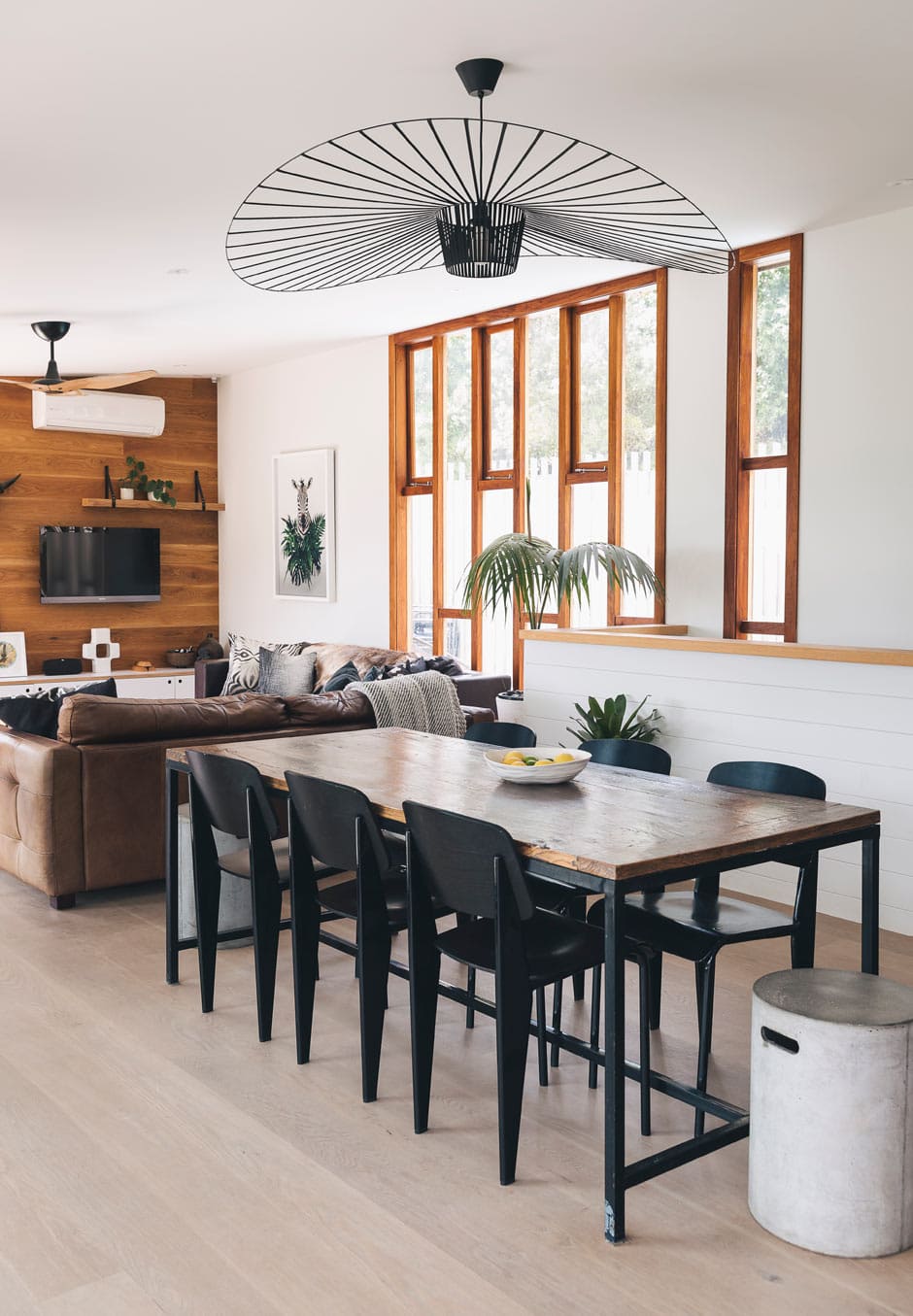 TOP Ben loves to cook, so having the big Smeg gas cooktop and a generous bench was imperative in the kitchen. Out of sight is a butler’s pantry with ample open shelving. Virginia chose porcelain concrete-look floor tiles from Tile Space for the splashback, Copenhagen SC7 pendant lights by &tradition from Design Denmark and stools from Hunter Furniture. ABOVE “We were designing to a budget, so there isn’t anything that’s particularly lavish in this house,” says Virginia. “I like simplicity but with some special features, so it was just about picking out little places where we’d have them, like the Vertigo pendant [by Petite Friture from ECC] over the dining table and the Big Ass bamboo fans in the living area.”

Outside of her day job as a lawyer, Virginia’s creative passion is interiors. To turn this house into a family home, she took her cue from the surrounding environment. “There’s a certain style on the island and you need to retain that relaxed beach feel,” she says. “I’m also a real homebody, so we wanted to create the perfect place to just kick back in.”
Using neutral colours and textural furnishings, they’ve done exactly that. The redwood front door leads from the home’s striking architectural exterior into spaces that are extraordinary yet welcoming and unfussy. Sandy feet and the family’s two golden retrievers are of no concern when the living is this easy — and the floors are a forgivingly pale American oak timber. 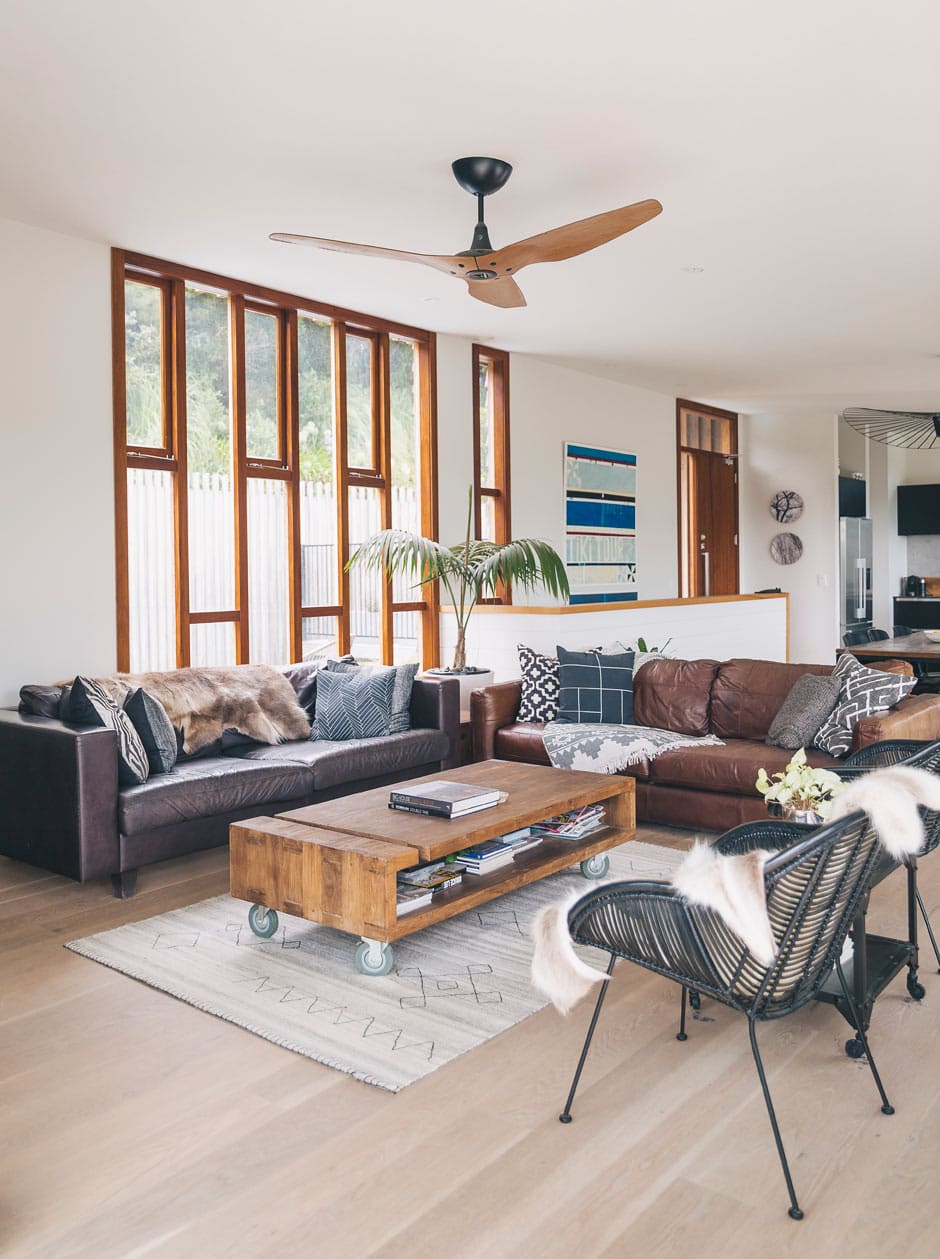 ABOVE Paul says the cedar windows in the living area are one of his favourite elements. “Aluminium joinery is the go-to solution because it’s cheaper than timber, but with windows I like to mix it up a bit. Some people say you can’t mix timber [and aluminium], but you can, actually, and it works quite well here.”

From the spa to the wine fridge to the gym, the dwelling replicates resort life. “Ben and I are very social people, so we thought about how we live and entertain and tried to design for that,” says Virginia. “Everyone comes round to have barbecues, so having the swimming pool plus the bunk room downstairs where we can plonk all the kids while we’re having dinner works brilliantly.”
How apt that this home is enjoyed by all when its creation took a village. “This project was the first time Ben and I had a team who took care of everything,” says Virginia. “We’ve done heaps of DIY on the other houses we’ve renovated, which means working all day then coming home and painting, which is pretty full-on. This time, we decided to just hire the right people and go hard and move in as quickly as we could.” 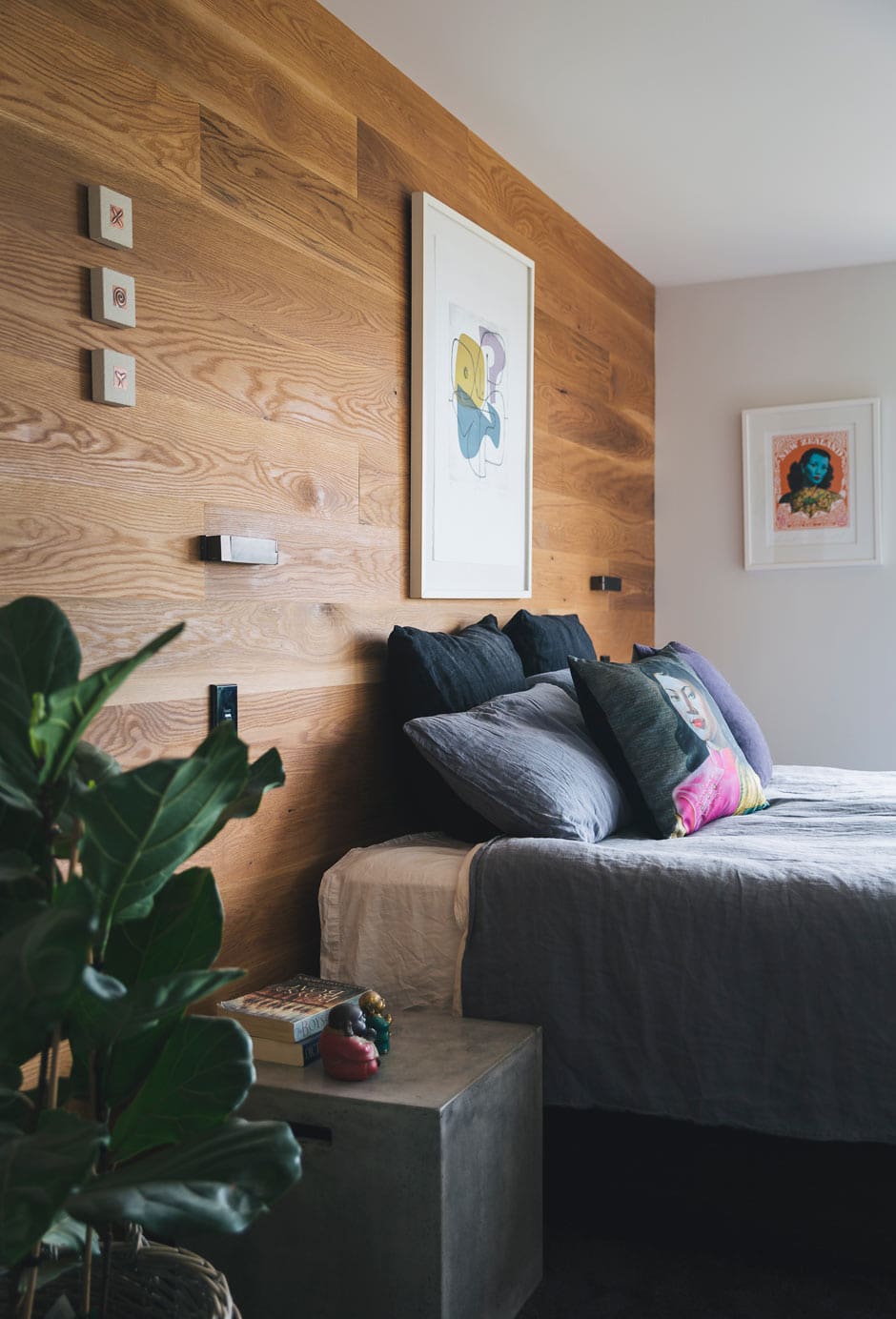 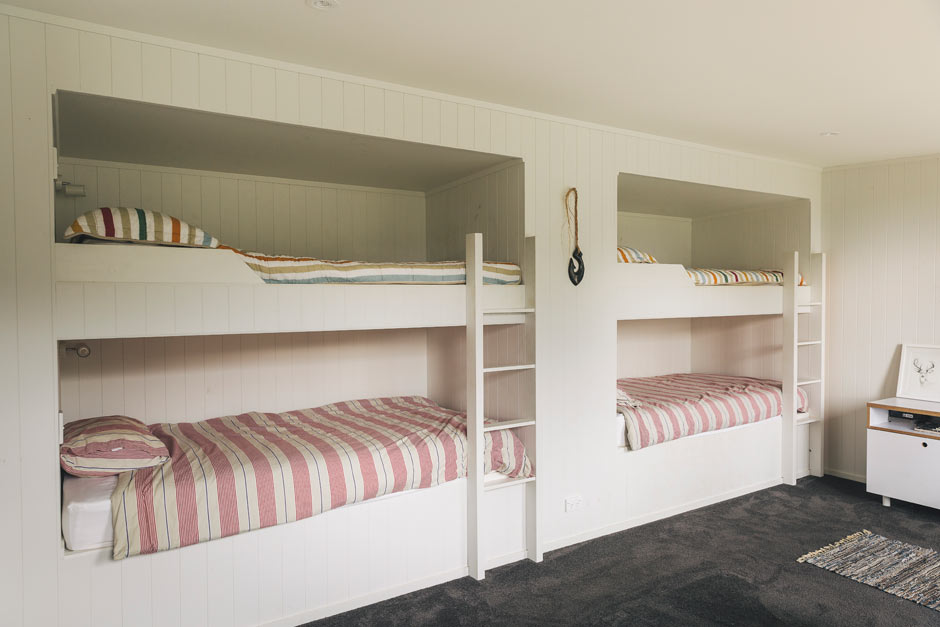 TOP As Paul says, “It’s a pretty flash ‘bach’”, but the team did include some rustic elements to reference the island vibe, like adding timber panelling to selected walls. Virginia’s big on colour and incorporated it into previous renovations with abandon, but here she wanted the views and window detailing to sing, so she stuck to a neutral palette and added detail through art and accessories. Two of her friends, Anna Church and Nikki Apse, are artists, so many of their pieces feature — another lovely connection to the family’s extended community. Seen in the master bedroom are Le Tiki by Dick Frizzell (left) and Poll Tax by Lester Hall. ABOVE Perfect in more ways than one, the semi-detached pod downstairs containing a bunk room and gym puts the kids out of sight and earshot of the adults upstairs. The boys host sleepovers and movie nights down here, and the gym is really well utilised, both by the couple and the kids — 18-year-old Harry for his rowing training and 13-year-old Tom his martial arts.

Virginia says this collaboration was a highlight of the process. Not only are she and Ben a combined force, they trusted Paul and Tony’s recommendations implicitly — and they in turn were a dream team. “I think that architect-builder relationship is a really important one,” says Virginia. “It’s about communicating well and knowing what your areas of expertise are. We were super lucky and in the end, the house reflects all of us. We created a very warm and social space that we can share.” 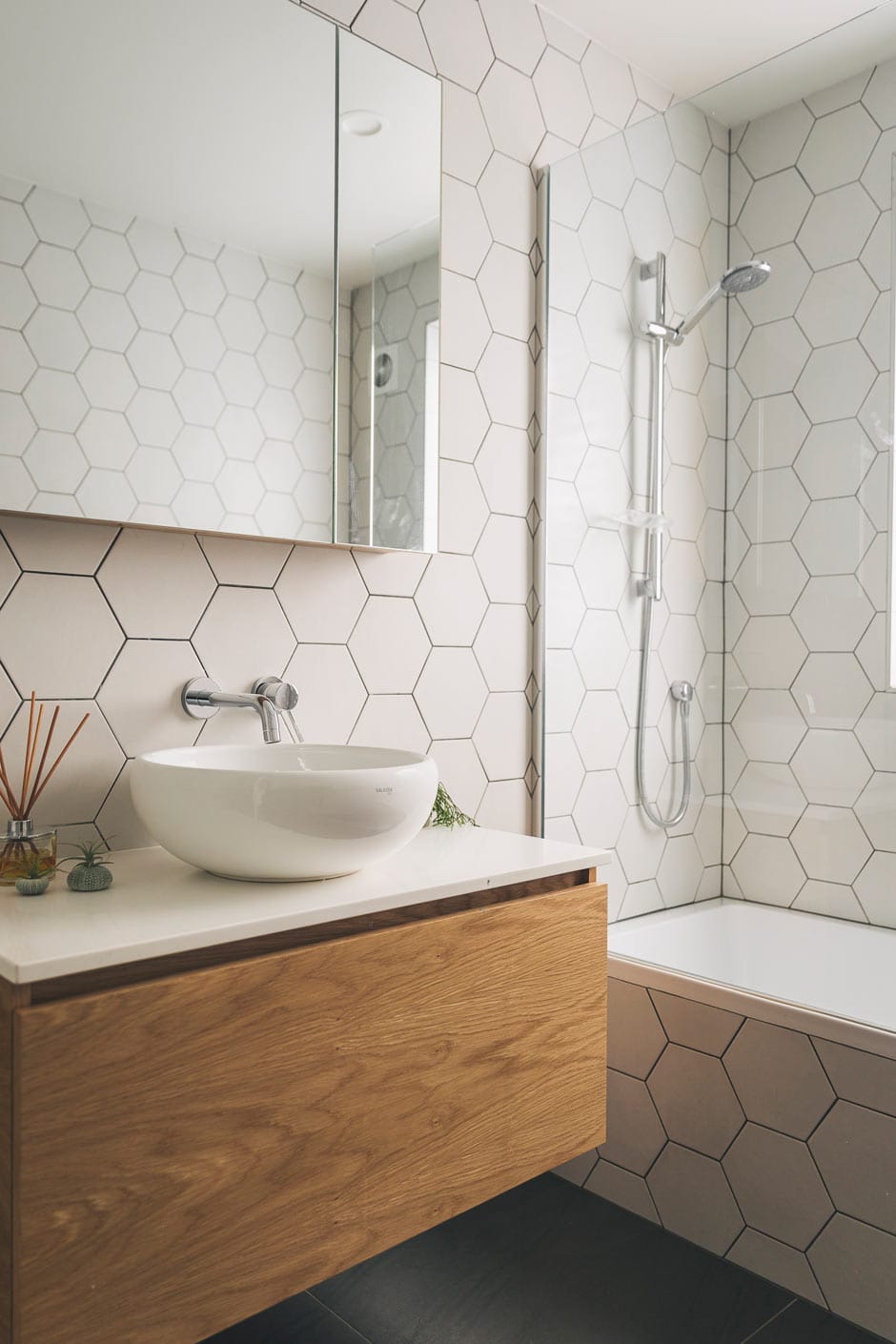 ABOVE Matte tiles from Tile Space line the walls and floor in the ensuite. The cabinetry and basins are from Franklin and the tapware is from Methven.

Inevitably, the house has done wonders for the family’s popularity. “I could count on one hand the number of days we didn’t have people visiting or staying last summer,” says Virginia. “There was a lot of dancing on our front deck.”
Socialising, swimming, relaxing, working out — Virginia reckons there’s really no need to leave the property if they don’t want to. “Since we moved in, I’ve hardly spent any time at the beach — it’s pretty tricky to get me out! Now when we go away on holiday we’re like, ‘I really want to go home.’ It’s quite hard to get me off the island in summertime — why would we want to leave?”